PLUS! Behind the scenes with designer Barry Bradfield and sculptor Jean St. Jean!

I’m gonna throw this out there right now: I’ve never been much of a Bookworm fan. I’m not entirely sure why, but there was something about him that just seemed … unthreatening.

Thing is, a lot of people seem to disagree. For example, John S. Drew of the indispensable Batcave Podcast counts Roddy McDowall’s one-time, Season 1 turn as among the best of the TV-only villains.

Either way, any new Batman ’66 merchandise is a reason to do the Batusi, so check out this EXCLUSIVE FIRST LOOK at Diamond Select’s Bookworm mini-bust, which will be available for pre-order later this month. (Like the other busts, he’ll list at about $60.) 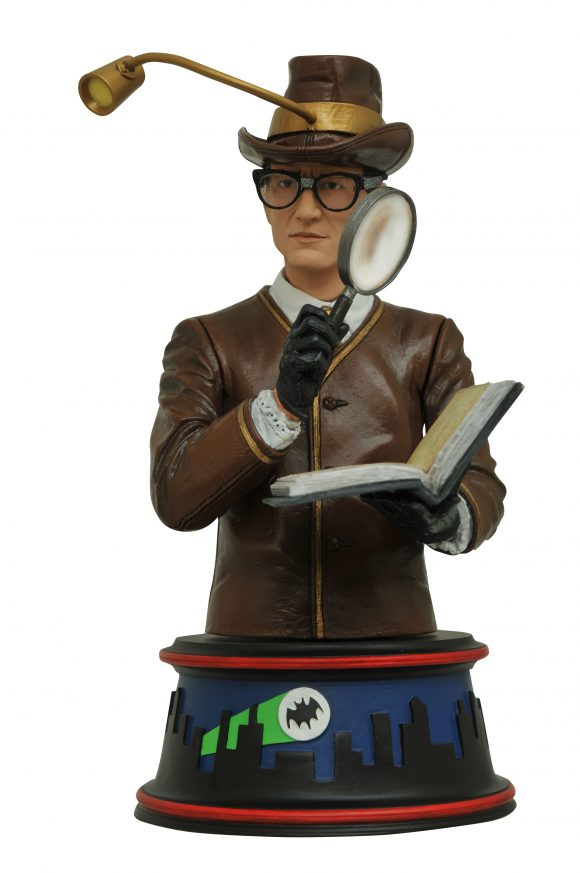 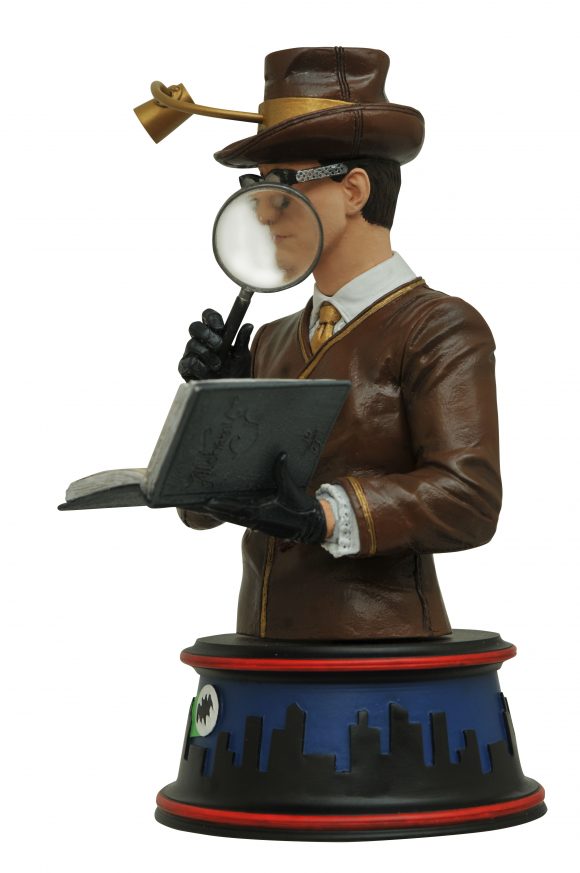 First, check out our Diamond Batman ’66 Holiday Update for the latest availability of their upcoming statues, busts and props. Click here. 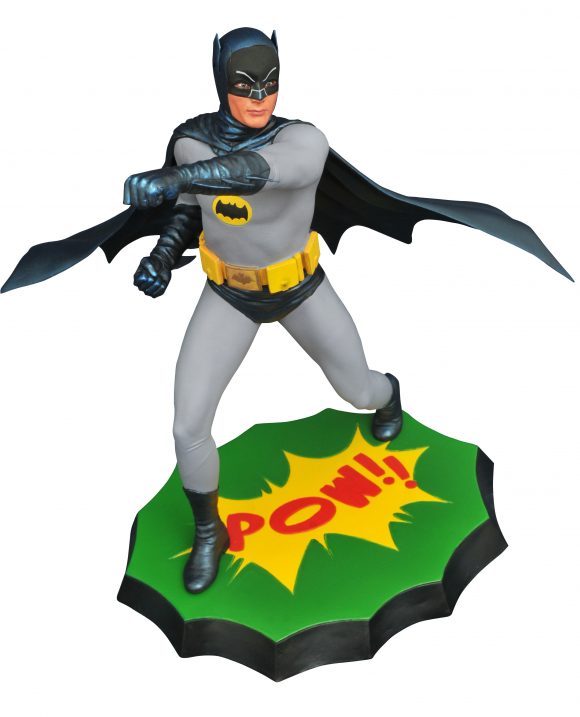 Batman is due this month!

Second, check out the INDEX of our Diamond Batman ’66 coverage. There’s lots of fun stuff in there. Click here. 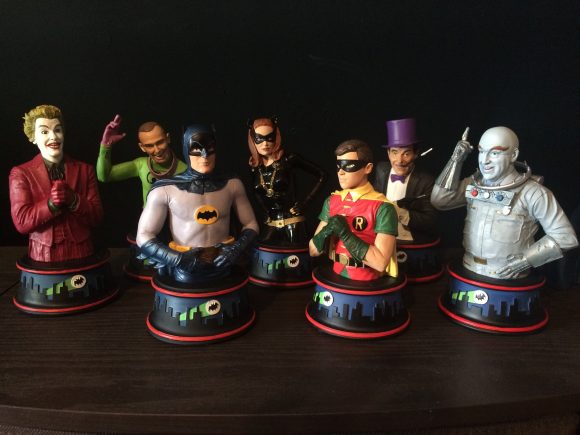 Now, here are Bradfield and St. Jean to take you behind the Bat-curtain, with Bookworm… 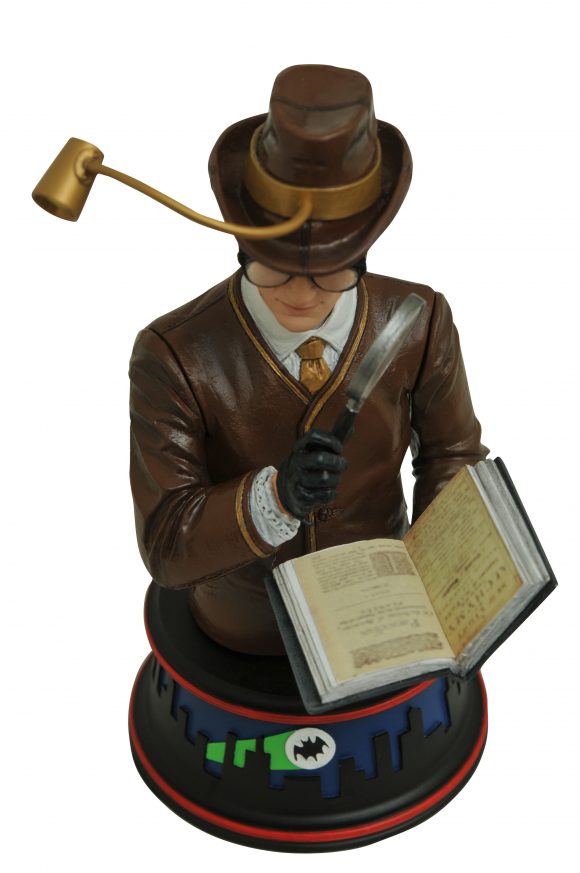 Dig the detail in that book…

Dan Greenfield: I always think it’s funny that we’re getting Bookworm merchandise since Roddy McDowall’s estate signed onto the general merch deal. That’s not really a question, I know. But don’t you find it kind of odd?

Barry Bradfield: I think it’s great! I love collecting as many different Batman villains as possible, so to be able to add Bookworm to the collection is wonderful!

Jean: Actually, I was psyched because I forgot he was on the show until I went through a few mags from the ’90s that had pictures of him! 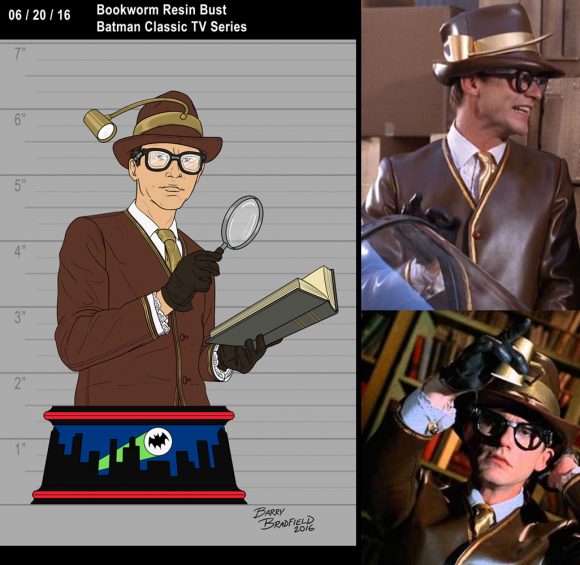 Dan: The hat and glasses do a lot of the work, likenesswise. How do you make sure you still capture McDowall’s face in the design?

Barry: I do think a lot of having it look like the character is in the outfit this time. McDowall’s almost lost behind those glasses and that hat. When drawing the design, I drew McDowall first, then had separate layers for the hat and glasses. I didn’t just want to draw the Bookworm, but specifically Roddy McDowall AS the Bookworm. He doesn’t have a lot of features to capture and immediately identify him by, but his thin lips and chin shape do help.

Dan: Now, where do you stand on Bookworm? I never liked him much, though I know fans who do.

Barry: As I mentioned with King Tut (click here), I never liked any of the villains I didn’t know as a child. Now, I appreciate his episodes a lot more. There’s a certain charm to his outfit that I didn’t notice while younger that helps make him appealing to me now. I mean, the guy wears a leather-bound suit. That’s a special kind of criminal right there, even for Gotham City! I find it odd they didn’t bring him back to bother Batgirl though, given Barbara’s a librarian and all. It would have been a perfect fit! 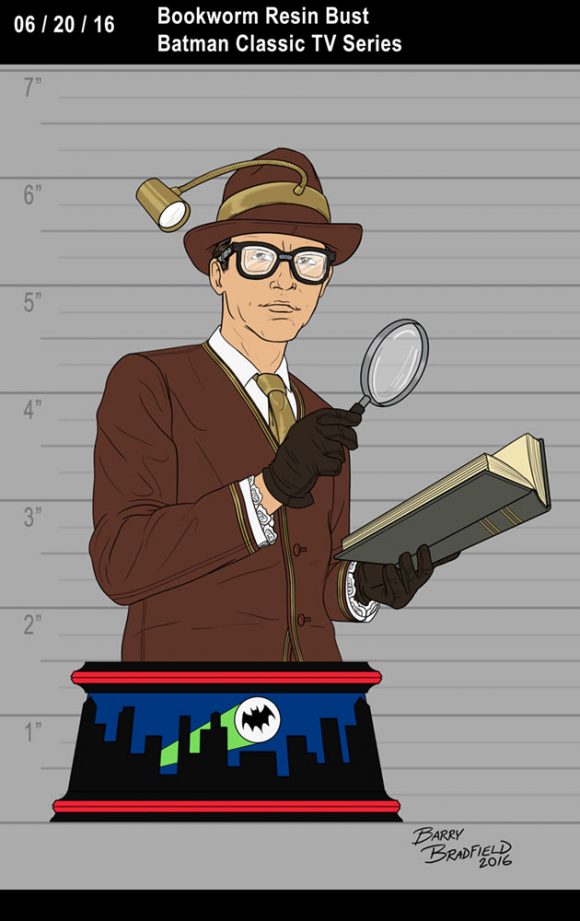 Jean: Well, not my favorite villain, but I love Roddy McDowall from Planet of the Apes and much later, Fright Night, so it’s great to see him in there as well!

Dan: That said, that’s a pretty cool likeness. Don’t you now want to do a series of Planet of the Apes busts? C’mon, make that happen.

Jean: After Batman ’66, Planet of the Apes is my most important bucket list license! They’ve all been gradually coming under my sway, and I will at some point make my mark on our future ape overlords. Mark my words, citizens!