THE SPIDER’S WEB: Plus the heart-rending classic The Kid Who Collects Spider-Man…

Hey gang — last time we focused on the first chunk of Roger Stern and John Romita Jr.’s Amazing Spider-Man run, ending with the legendary two-parter, Nothing Can Stop the Juggernaut. We continue to look at the superlative run, and its somewhat messy conclusion, here. And things are about to get really interesting.

Once the Juggernaut saga is complete, Stern shifts into the next phase of the run — focusing on the corrupt and mysterious Brand Corporation, which is a tool he’d used to some effect in Peter Parker: The Spectacular Spider-Man, most notably in his origin story for B-List villain/antihero Will O’ the Wisp. If there ever is a point where the Stern/JRJR run seems to lag, even a bit, it’s here — but it feels intentional, almost — as Stern reconfigures and destroys the Tarantula in a sequence that’s tragic, haunting and adds pathos and character to a villain many had probably ignored by this point.

The one-off Stilt-Man issue, by Stern with a script by Spidey vet Bill Mantlo and art by Bob Hall, falls a bit flat, and doesn’t feel essential — but it does work almost as a palate cleanser, because when the full team comes back for the next issue, it all changes. 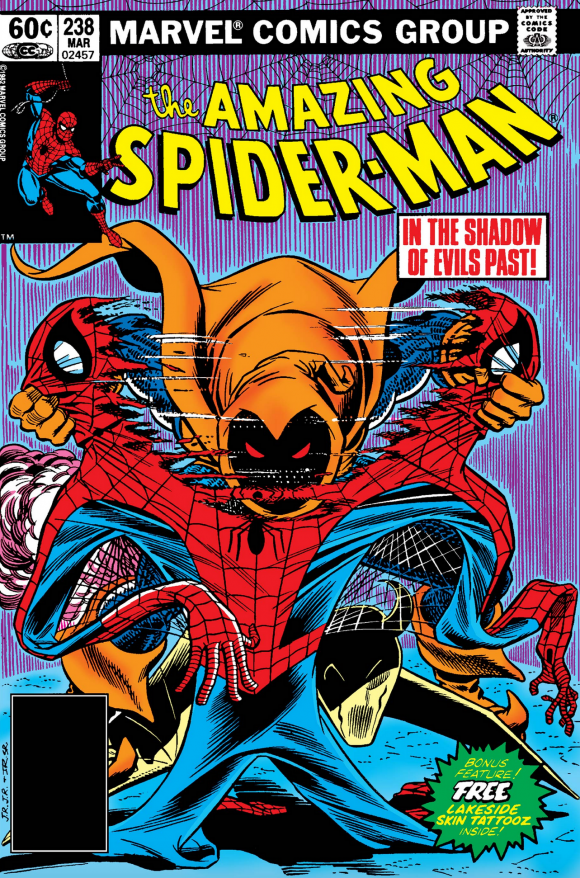 You can make a strong case that everything leading up to 1982’s Amazing Spider-Man #238 — the first appearance of the Hobgoblin — was a sometimes great, always good first season. And like most shows, even the best ones, first seasons are bumpy. They can feature startling highs, like the Juggernaut story, but they’re usually shakedown cruises — creators getting their sea legs with their world and characters. If you apply that idea here, then #238 draws a line in the sand that’s clear from Page 1: This is the real deal, and these stories will be heralded for a long time.

From the first page, #238 is a tonal shift, with JRJR going for a noir shadow draping over the proceedings, which are, admittedly, mundane, with Aunt May signing paperwork to make her Forest Hills home into a boarding house for the elderly. But it’s a first move in a three-dimensional chess game Stern’s been playing for a while. I mentioned this a few columns back, but it’s clear Stern longed to have Peter Parker and Spider-Man in the place he envisioned as “correct” — working at the Bugle, single, his aunt back in his life, and struggling financially. That seems to be where Stern thought the best stories could be found. He was right. 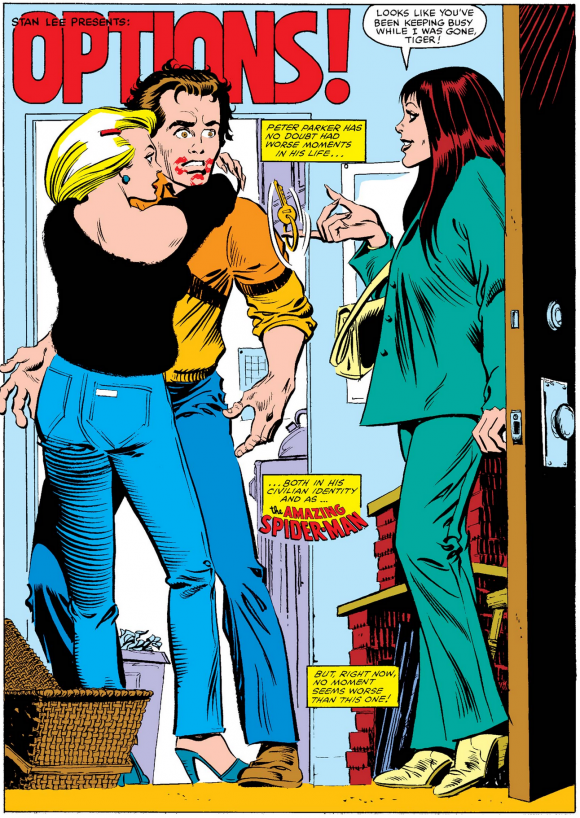 Another sign of this is the return — at least in terms of appearing in the comic — of Mary Jane Watson, who turned down Pete’s proposal during the early days of Marv Wolfman’s run and had been gone since. Her reappearance in #242/#243 is another signal that Stern is going back to basics and what he sees as Spidey at his best, and it feels welcome, smartly crafted, and compelling. The use of long-running characters like Robbie Robertson, Betty Brant-Leeds, and another long-gone supporting cast member in Harry Osborn, supports the idea that this story is not only big, it matters to the Spider-Man mythos. It feels epic in scope even if it’s tight in focus. Hard to do, and the Stern/JRJR team pull it off with gusto.

And we haven’t even gotten to the Hobgoblin! It doesn’t take a lot to figure out that Stern is a student of the classic Lee/Ditko/Romita era, and the Hobgoblin mystery unfurls as a modern take on what those masters did for the original Green Goblin, Norman Osborn. In fact, if Stern had his druthers, he would’ve drawn out the Hobgoblin’s identity the exact amount of issues that we saw before the Norman reveal. There are some cool, in-the-weeds twists that add to the suspense and dark elements of the issue — and set the tone for the rest of the run. 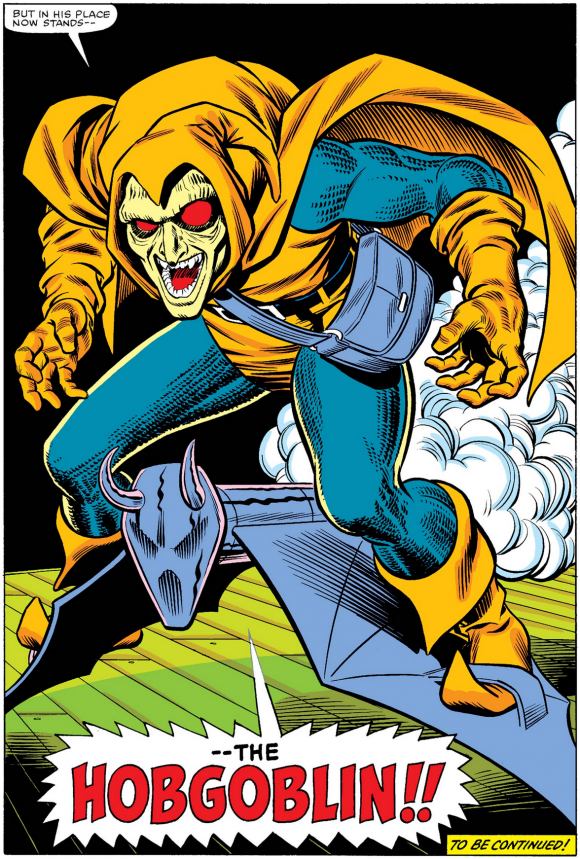 In theory, the Hobgoblin is a fairly menacing concept: A stable, focused individual harnessing the power of the Green Goblin could pose an even deadlier threat to Spider-Man. In the longer view, and out of Stern’s control, the Hobgoblin has been relegated to a second or third fiddle to the revived Norman, which is a shame. But at the time of this story, it felt fresh to have a villain come in and threaten Spidey with tactics that were at once familiar and new.

What a cliffhanger, too! The final page of #238 leaves readers slack-jawed by this new threat, and it pays off in the next issue, where Spidey and the Hobgoblin face off for the first time.

Stern and JRJR smartly detour away from the villain for  a spell, with another great, two-part Vulture story shedding more light on his origins, and a serviceable Mad Thinker romp that seems to exist mostly to have some action complement Mary Jane Watson’s actual return to New York. But it all keeps the water boiling in anticipation of the Hobgoblin’s return — and we see the new villain seek out the one piece of Norman Osborn’s puzzle that he was missing: the serum that not only granted the original Green Goblin his strength, but also drove him insane. Hobby, of course, wants to sidestep the latter effect, and enlists petty crook Left Donovan to not only test the serum, but to take a fall and make everyone — except our boy, Peter! — think the Hobgoblin is gone for good. 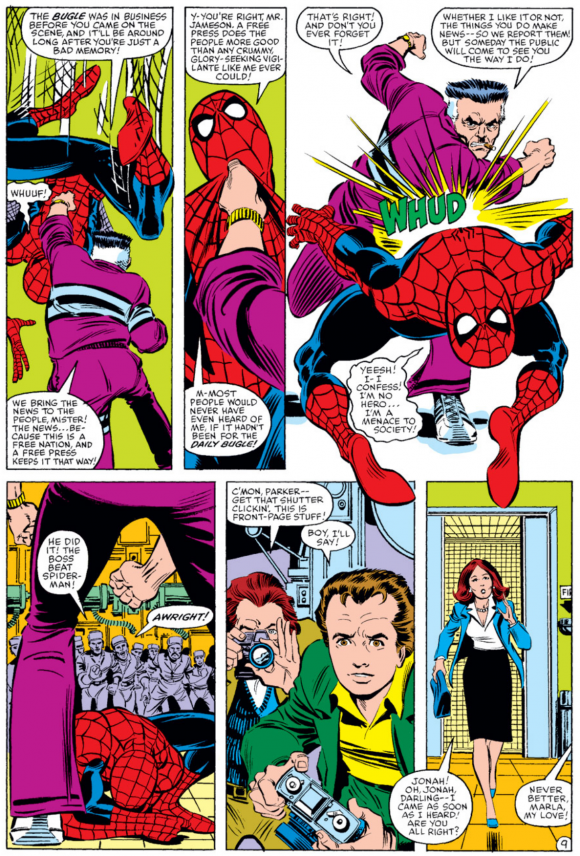 One of the great things about this run, and something we don’t see as much of in today’s comics, which are much more focused on writing for collections, is the team’s ability to have high impact, classic brawls and then sidestep to more personal stories, or even funny ones — like Amazing #246, an imaginary tale that leads readers through a variety of characters’ daydreams, including JJJ, Mary Jane and Peter himself. It makes for a longer, more organic narrative, and I think it’s something we’d all benefit from seeing stories today swing back to. It gives you breathing room between the Hobgoblin’s big debut — #238 — and his return in #244, both of which set the stage for his “final” battle with Spider-Man in #250. That’s a lot of real estate, when you zoom out — but the side quests and bottle episodes make it seem almost breezy in comparison to today’s narrative style. 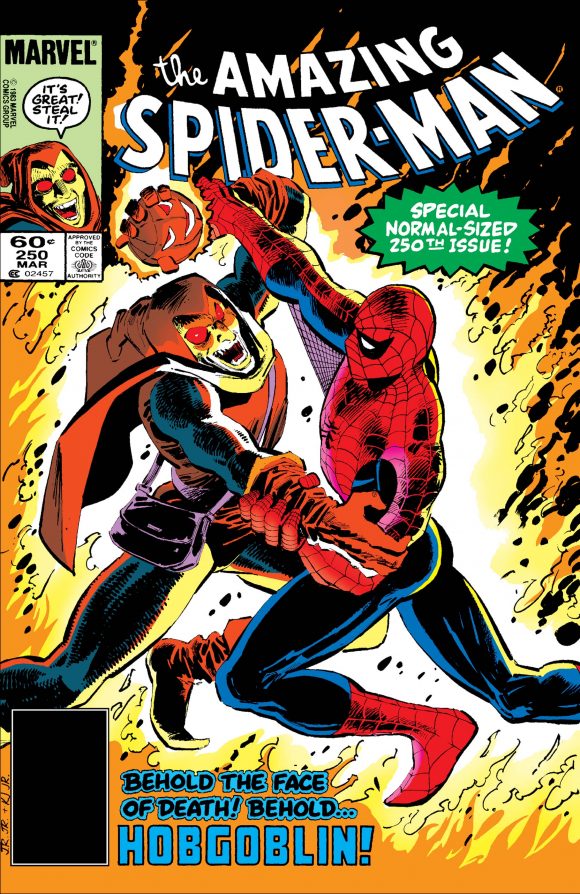 So, this finally brings us to my one quibble, if there is one, with the run: the ending. If I had the powers of the Beyonder, and only had a certain amount of issues I could give to Stern and JRJR, I’d do one thing — conclude the Hobgoblin story first, then end the entire Stern/JRJR era with The Kid Who Collects Spider-Man!

I realize that half of that issue involves a meaningless fight with Thunderball, but ignoring that, we’re left with another certifiably classic Spider-Man tale. From Stern and Spidey great Ron Frenz, doing his best Ditko impression, the short story is narrated by a column written by The Daily Bugle’s Jacob Connover, featuring the story of a kid obsessed with our hero. 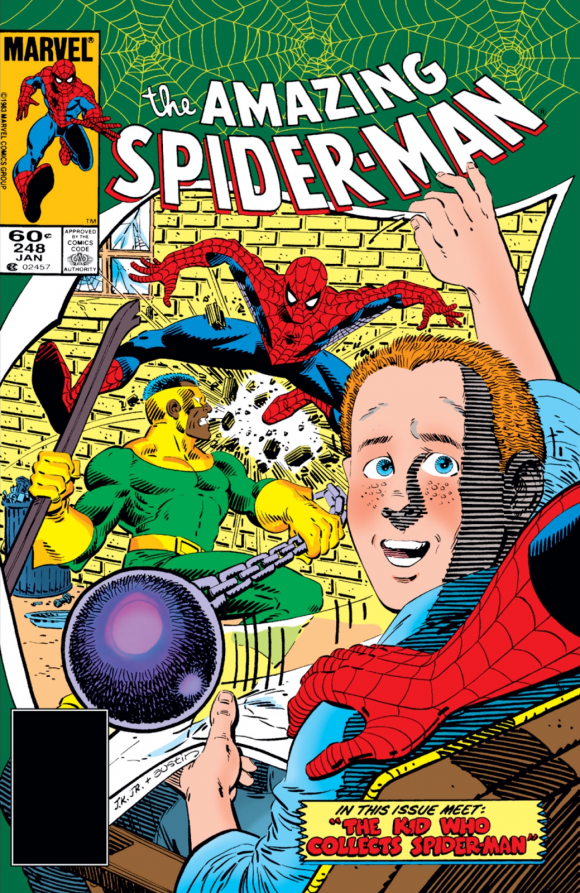 We see Spider-Man visit the boy, and they have a heartfelt chat. As the story unspools, though, we start to get a sense that there might be more to everything — until the last page, which will pull your heart out if you haven’t read this story already. It sums up Stern’s run perfectly — it plays on Spider-Man’s layered history, it builds off the humanity of the character, and it echoes one of the core tenets of Peter Parker and Spider-Man: responsibility.

It’s a truly masterful comic, crafted by two vets at the top of their games, and though it’s not published at the end of Stern and JRJR’s run, serves as the perfect coda to Stern’s time with Spider-Man. 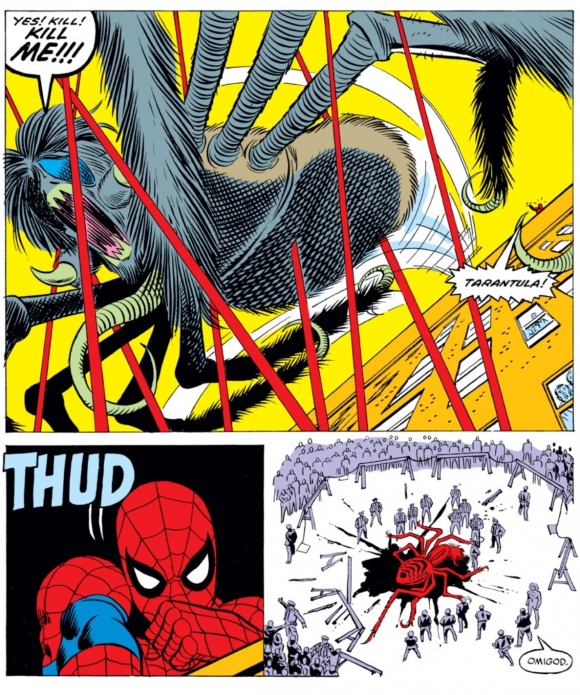 — We’ll keep discussing the Hobgoblin in the coming installments, but it’s no surprise to say that things didn’t turn out the way Stern had planned. So much so that Marvel, a decade after he left the series, came back to the scribe to have him revisit the saga and clarify for readers who the real Hobgoblin was. (Spoiler: It wasn’t Ned Leeds!).

— Since it’s been decades since Stern wrote the original story and the bookend, I think it’s fair to discuss the beats of the story and his intention to have Roderick Kingsley be the Hobgoblin. I have to say, knowing this going into the reread, it still doesn’t add up — Kingsley mentions a brother in #250 and perhaps before, which apparently was part of Stern’s plan: to reveal Kingsley had a brother that, thanks to a hairpiece, could sit in for Kingsley at business meetings and fool everyone. 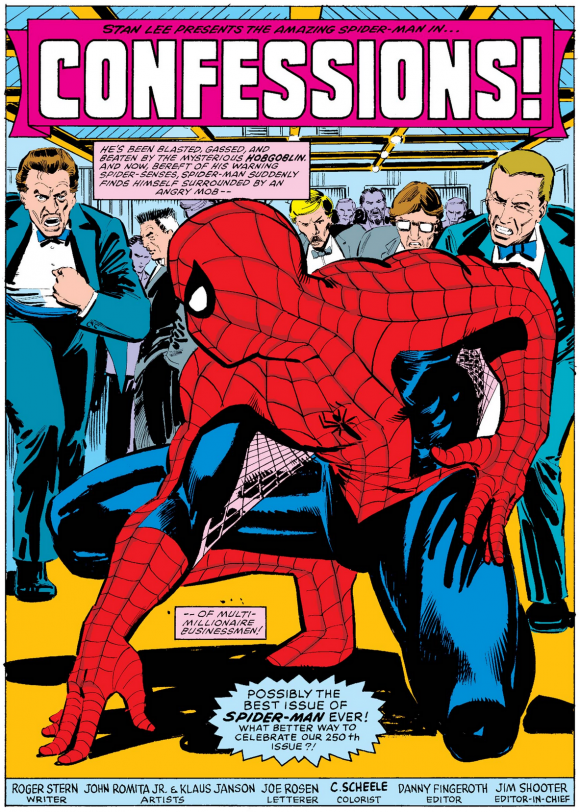 — It makes sense in hindsight, but feels flimsy overall. If you’re reading straight through, though, there’s no way you’d think Kingsley could be the Hobgoblin. In one of the climactic scenes, you see the camera zoom in on Kingsley as the Hobgoblin leaves the famed “club” that boasts Jameson, Osborn and the Kingpin as members. I believe that it was Stern’s intent, though, because otherwise he wouldn’t have dropped those red herrings. I just don’t find the “He had a brother!” twist as compelling a reveal. But it is kind of cool that, years later, he was able to return to the series and set things right. Ned Leeds never worked for me as a Hobgoblin beyond being a Band-Aid to fix a confusing plot thread.

— NEXT TIME: We ride on to the next Spider-Man era, as he gets some new duds courtesy of Tom DeFalco and Frenz! Stick around, Spider-Pals.