The story behind the legendary cartoonist’s quixotic quest — by his widow, Norma Martin 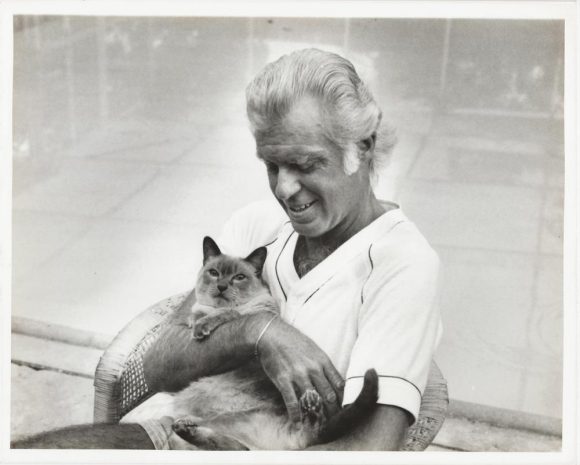 Don Martin and Stella. All images in this article are copyright Norma Martin. Used with permission.

Don Martin would have been 86 today and we’re proud to present this piece by Norma Martin, his widow.

Norma, I’m pleased to say, is a regular 13th Dimension reader and has contributed stories about Don in the past. (Click here and here for a couple examples.)

Here, she takes you behind the scenes of Don’s quest to produce a successful newspaper comic strip. It’s about passion and creativity — and how they often collide with the publishing business.

So dig this piece and enjoy the more than 13 rare Don Martin strips that Norma included. — Dan 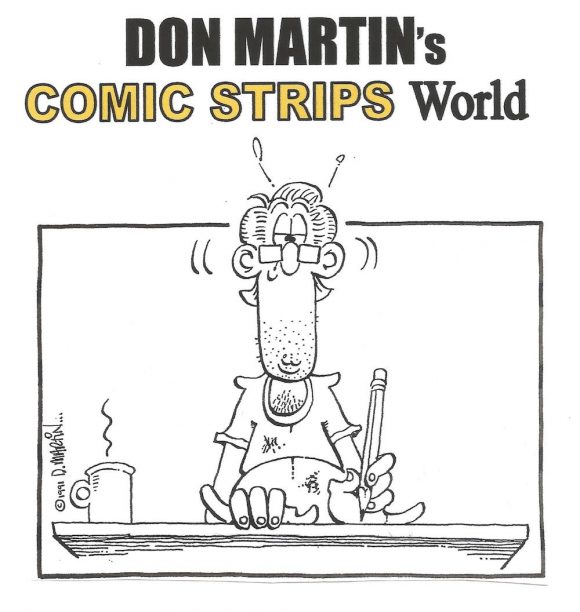 In 1931 when Don Martin was born, comic strips were a major part of newspapers. During this Golden Age each comic was spread across an entire page of the paper providing both children and adults with amusement.

Unlike the comic strips of today, each early successful comic had room to stretch in panels that allowed for elaborate artwork and bold coloration. Look at any history of comic strips of this period and you will see a glorious, colorful patchwork of fantasy, adventure and fun.

Don was influenced by these early works, as were many other artists and writers, and as he explained in a Honk Magazine (1986) interview… “I got interested in cartooning in the first place because I was attracted to comics — the funny comics, not the adventure comics. …The drawings I used to like were Bringing Up Father –Maggie and Jiggs.  I don’t think I much followed the stories, the characters. But I used to marvel at the drawing. Polly and Her Pals was another one — they had this crazy cat who mocked everything. Smokey Stover, Krazy Kat — that would have been around 1940.”

By 1956, after five years of art school, freelancing and some studio jobs, Don became a contributor, as a cartoonist and gag writer, to MAD Magazine. Within a short time his unique brand of humor and art were well known around the world. However, even with this success, he and his MAD pals and one of Don’s gag writers had dreams. They wanted to strike it rich with a comic strip like Charles Schulz had with his Peanuts strip.  They weren’t the only ones with this dream, as most major comic-strip syndicates fielded thousands of submissions annually from cartoonists and writers. There were few acceptances and fewer successes.

During these pre-computer years, a comic strip’s hard-copy inked pages travelled by mail to syndicates. Creating a comic strip was a lot of work and each one usually had a small staff on the creative side, with a syndicate providing salesmen, duplication, billing and much more in order to keep things moving. Most of the time, the syndicates owned the copyrights to the strips and this created any number of problems that may or may not have been resolved for today’s creators.

In any case, a comic strip was a lot of work, with Sundays colored using a limited color chart that was sent to a third party who followed the creator’s notations that were marked on a copy of the strip. Still, while it may seem primitive compared to Photoshop and other computer programs used for coloring strips today, look at the early comic strips and you will see this early effort created a marvelous palette for each comic.

Going through Don’s files we found that the earliest comic strip he was involved with and drew up was one using Captain Klutz as the main character. This was probably in the early 1970s and nothing came of this effort, save for some art which is lost. Then by 1983, Don told the interviewer, Mike Zwerin, of the International Herald Tribune, that he and Don Edwing, a writer, failed to find a syndicate to buy their proposal for a Sunday strip called Fopsop’s Fables.

During 1984 and 1985 when The Far Side was popular, Don and a favorite gag writer, John Gibbons, created a single-panel strip entitled Unbelievable But Strange. A great amount of effort went into this strip’s creation and it was sent to many syndicates, but the timing was wrong and no one was interested in it. However, some syndicates did exhibit interest in a Don Martin comic strip.

So by early 1990, still believing in the comic strip dream, Don collaborated with me on a comic strip that eventually became The Nutheads. As Don said in a radio interview, it’s “a comic strip about a nutty family that centers around a way-out supermarket, the kind that Alice in Wonderland would probably shop in. You can buy anything — from any time or place; but at the same time the gags are grounded in a typical TV-type family atmosphere.” 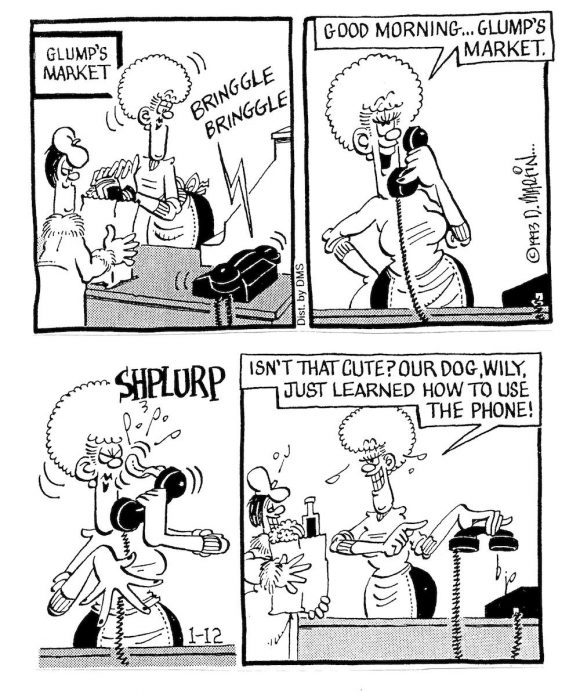 In the December 1990 Cartoonist PROfiles, Don described the creative process involved in the strip’s creation: “I gathered together all of the screwball characters that had appeared in my work for a number of years — all of the zany faces and figures — I didn’t really know who these people were or what they were. But by making a careful selection out of a huge variety of characters, I thought they would make a pretty good comic-strip family. (We) gave them names… a work environment, the store (Glump’s Market) with the slogan, ‘If we don’t have it, you don’t need it.'”

We lived with these characters for quite some time. Their foibles and characteristics eventually firmed up and they interacted like a real family. It was an interesting process. There was Hazel, the manager of Glump’s Market; her husband Nutley as her assistant; and the couple’s two children, a nine-year-old daughter, Macadamia, and a baby, Nutkin. They lived downstairs in a house with Hazel’s grumpy mother and father, Retchel and Bilious Glump, the owners of the market.  Other characters came and went as the main ones changed to make the strip funnier. Nutley made a major change from a jock to a Don Martin everyman jerk. This went on for weeks. 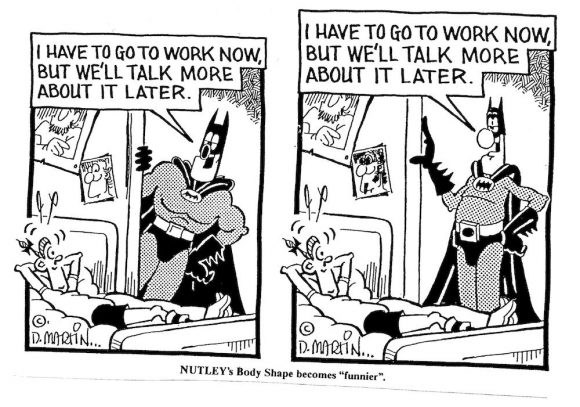 Eventually The Nutheads was sent to several syndicates and two of the major companies were interested enough to fly us out for interviews.

Both wanted the strip and Don selected the one with which he felt most comfortable. Our attorney negotiated an agreement that gave us copyright rights over the comic. 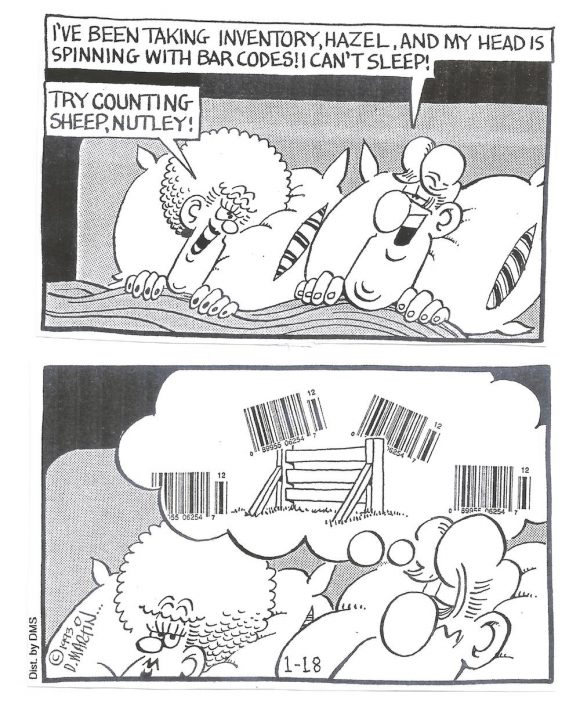 We worked very hard to make it a successful strip. It takes a lot of effort to create six dailies and one Sunday strip and all the while Don was also contributing to Cracked Magazine in addition to working on other miscellaneous projects. Fortunately, we had two fine inkers of Don’s tight pencils — Jack Bender for the strip and Bruce Bolinger for the magazine.

Our fax machine hummed and pages went out via special mail services. A far different way of working from the computer age we are living in now. 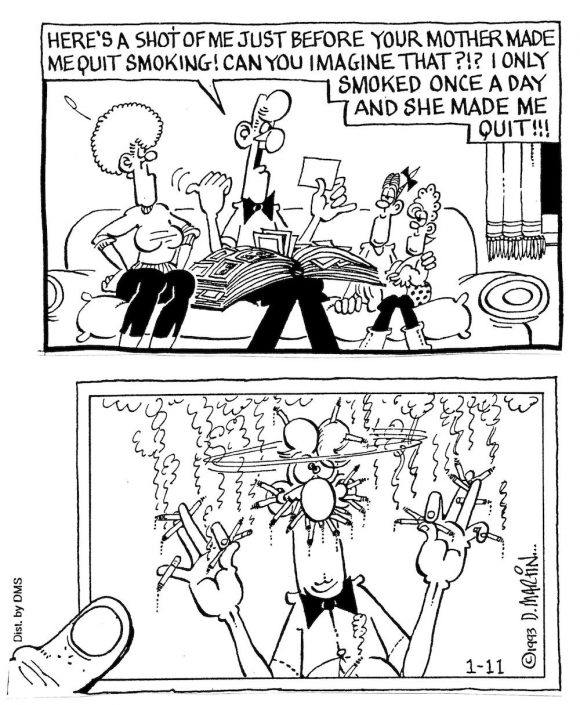 While The Nutheads was short lived, the humor was suitable, for the most part, for the newspaper market (a few people complained about the most amazing things) and it reflected Don’s love of silliness and way-out thinking. It was certainly as good if not better than the greeting-card humor found in many of today’s comic strips. And the artwork was always of the highest order. 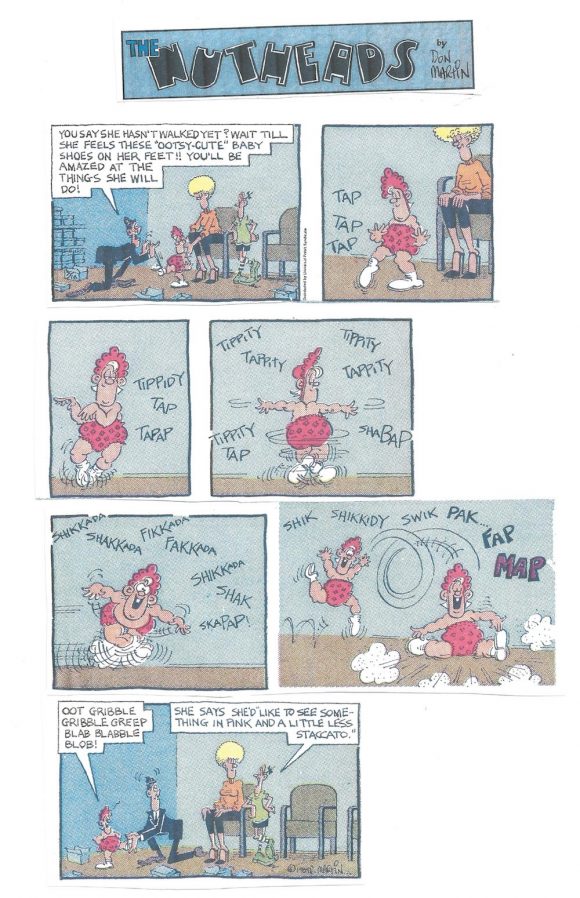 Recently I was wondering if The Nutheads would still be around if the syndicate had owned it or at least given it a longer chance in the marketplace, as it does with most strips they own. I have no way of knowing.

Enjoy this work, because I can assure you Don Martin enjoyed creating these comic strips — especially The Nutheads.

Don really believed in it. 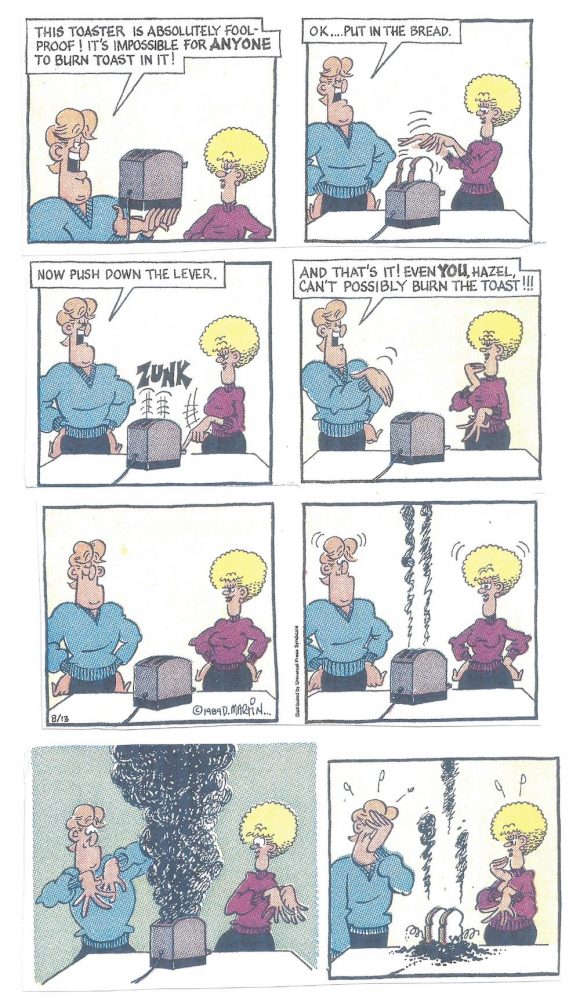 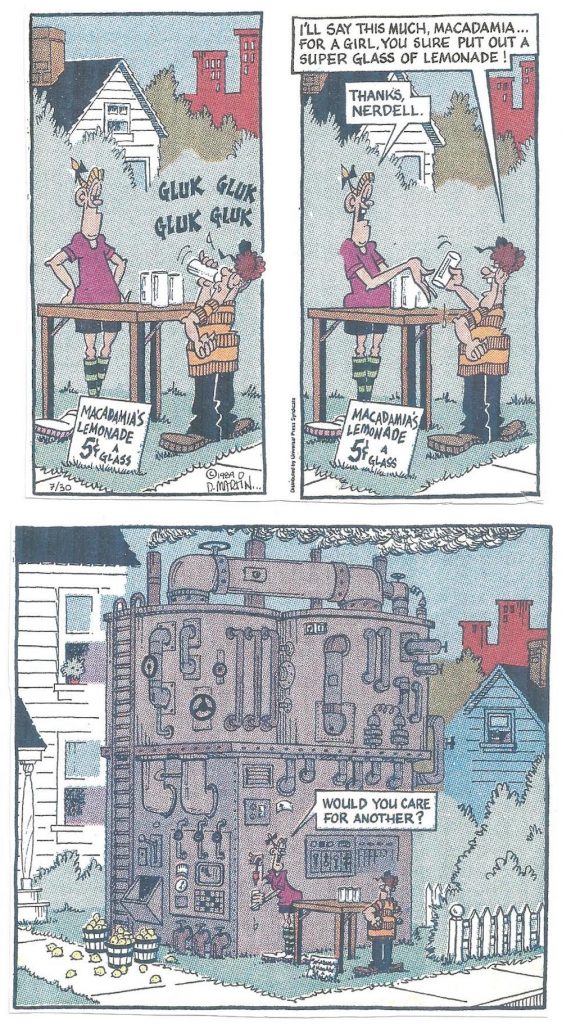 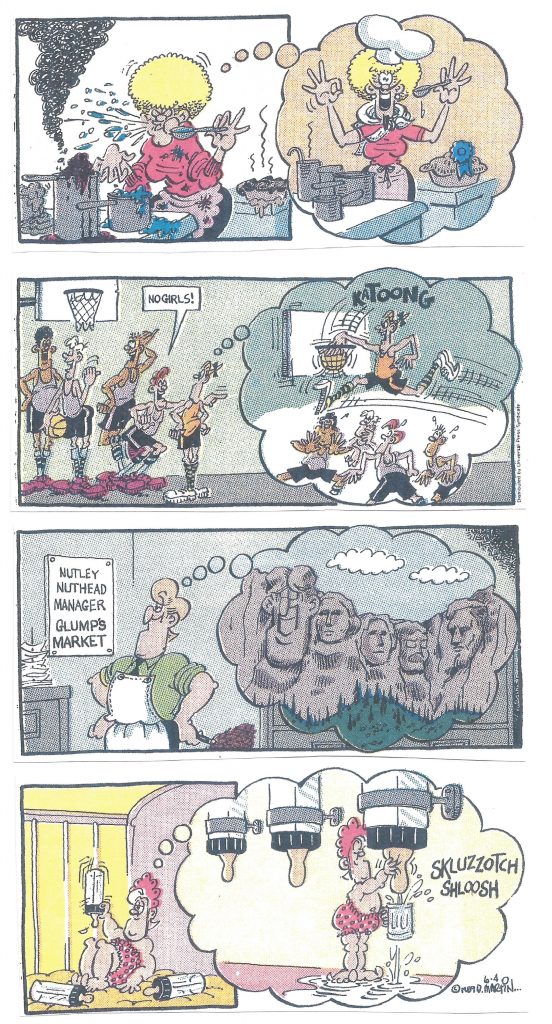 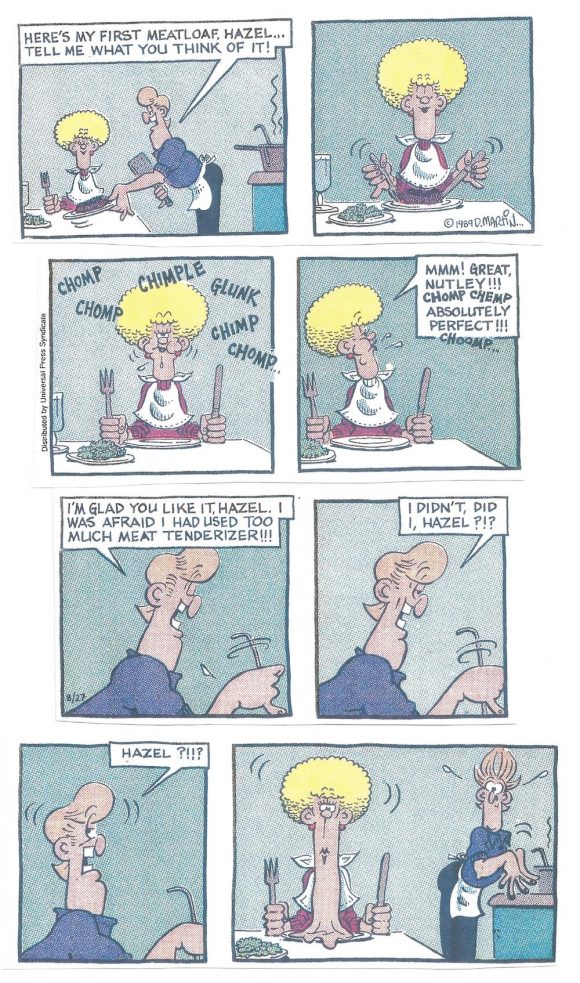