AN ANNIVERSARY SALUTE: As Marvel is wont to say… What If?

This may sound odd coming from such a Batmanophile, but when it really comes down to it, my all-time favorite cartoon is the 1967 Spider-Man series, which debuted 55 years ago today.

In fact, I can give you 13 reasons that’s the case — and have. You can click here for 13 GREAT THINGS ABOUT THE 1967 SPIDER-MAN CARTOON.

But you know what we never got from that series? Action figures.

Years later we got Megos, of course, and I cherish my Spidey and dig my Lizard and Green Goblin. 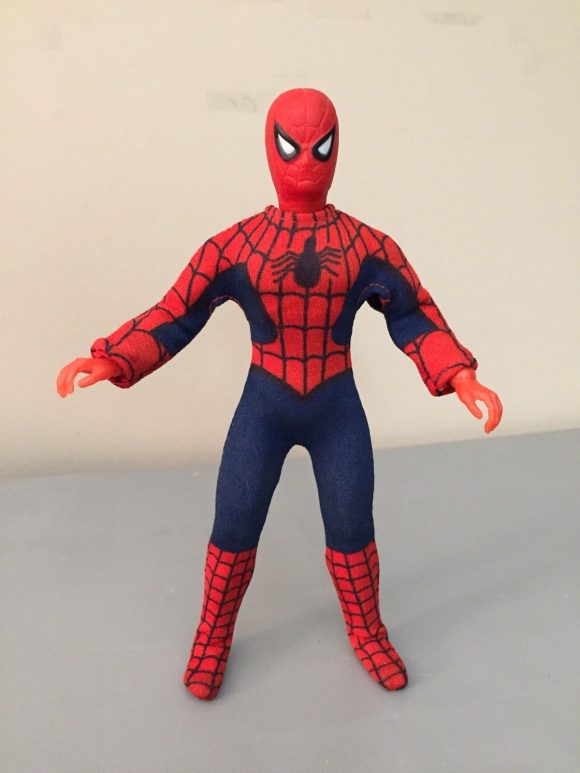 Not mine, but a really nice one from eBay.

Nevertheless, Spider-Man ’67 wasn’t merchandised like so many animated series are these days.

Well, at least Spider-Fan Brian Dailey wants to do something about it: He’s designed two waves of 3 3/4-inch figures that look much like the types produced by Super7 and Funko.

Check out his Wave 1 designs: 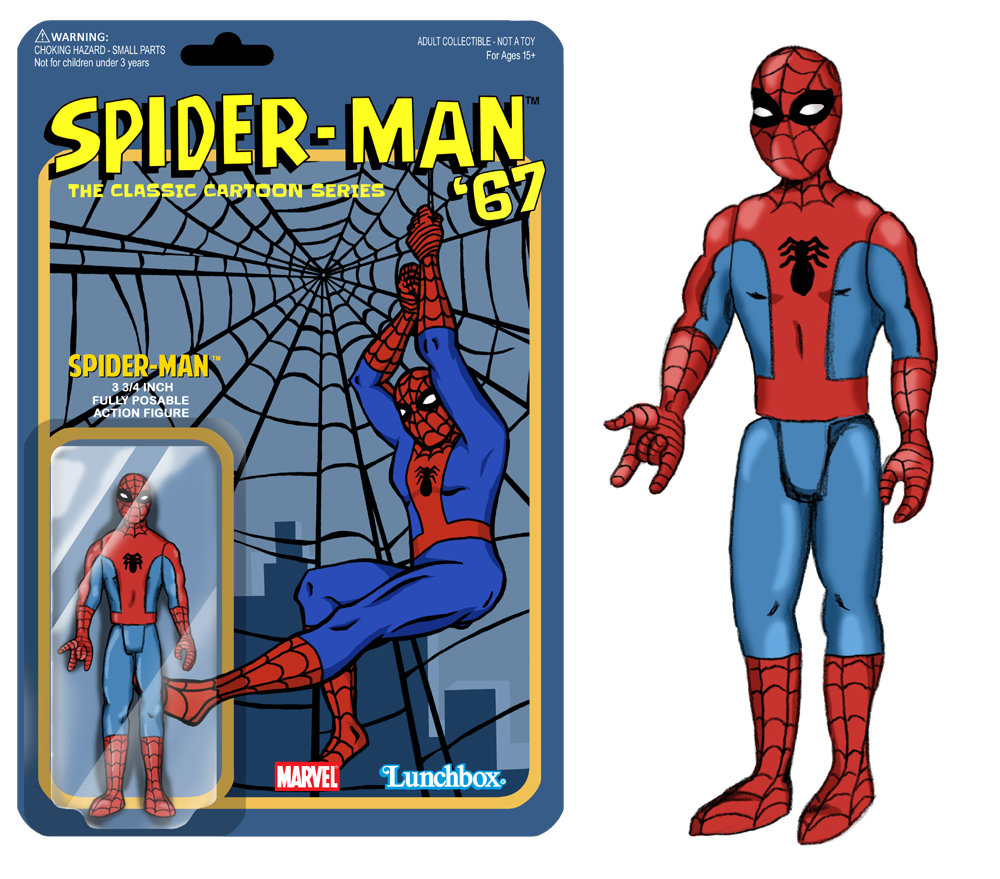 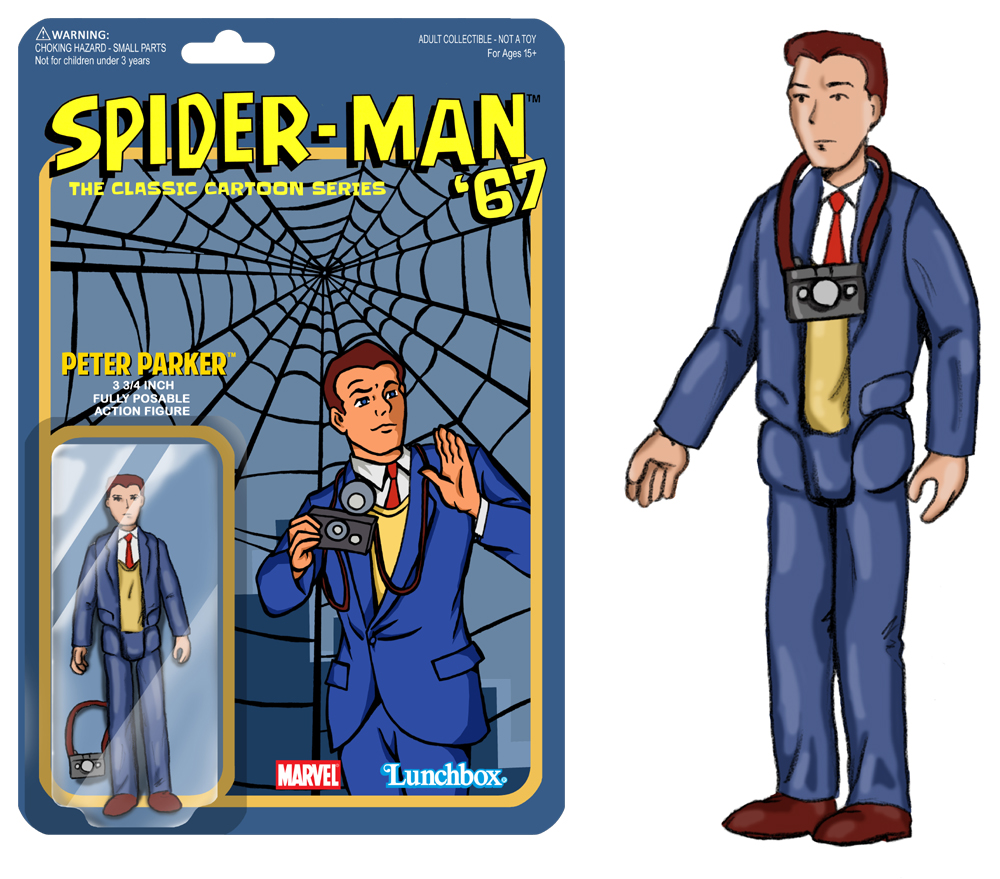 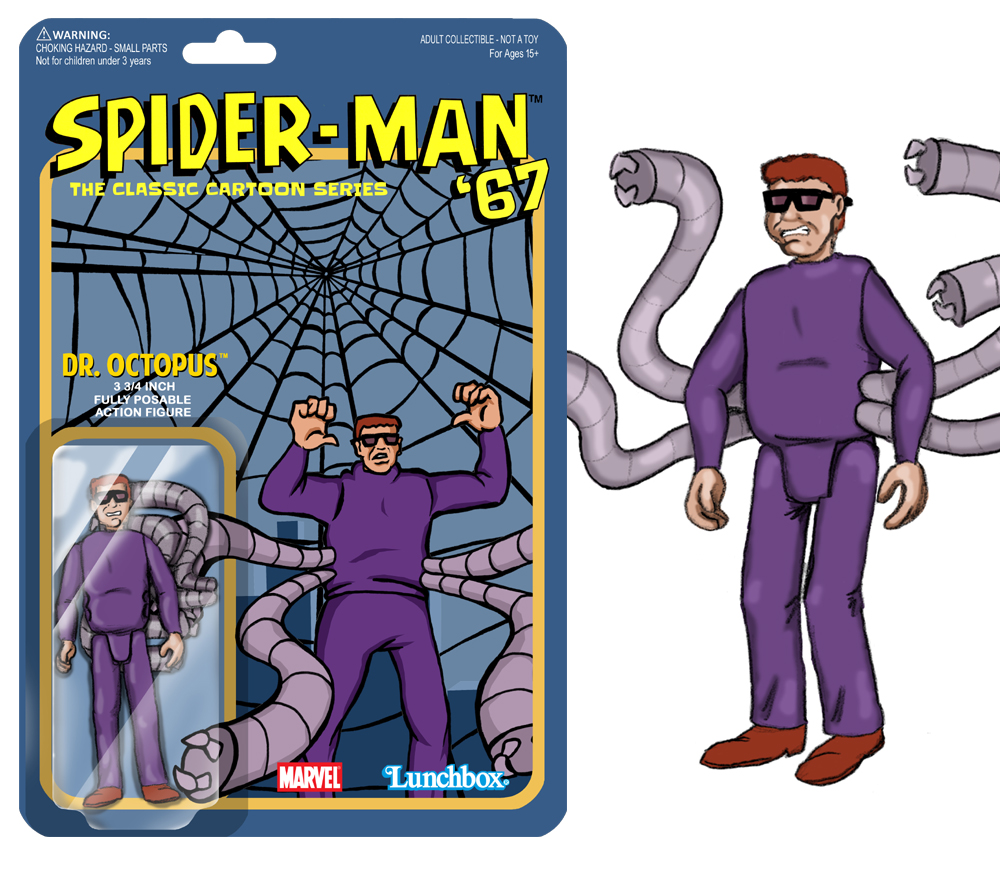 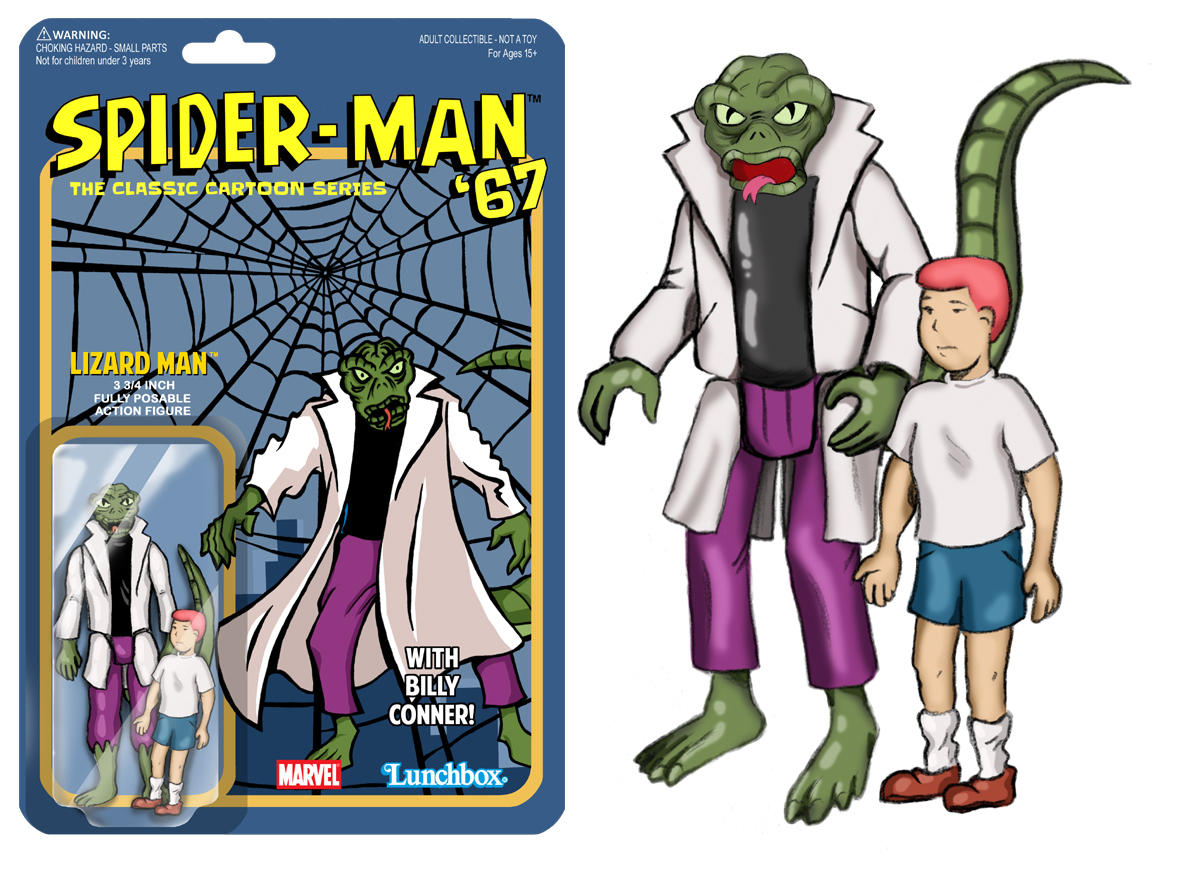 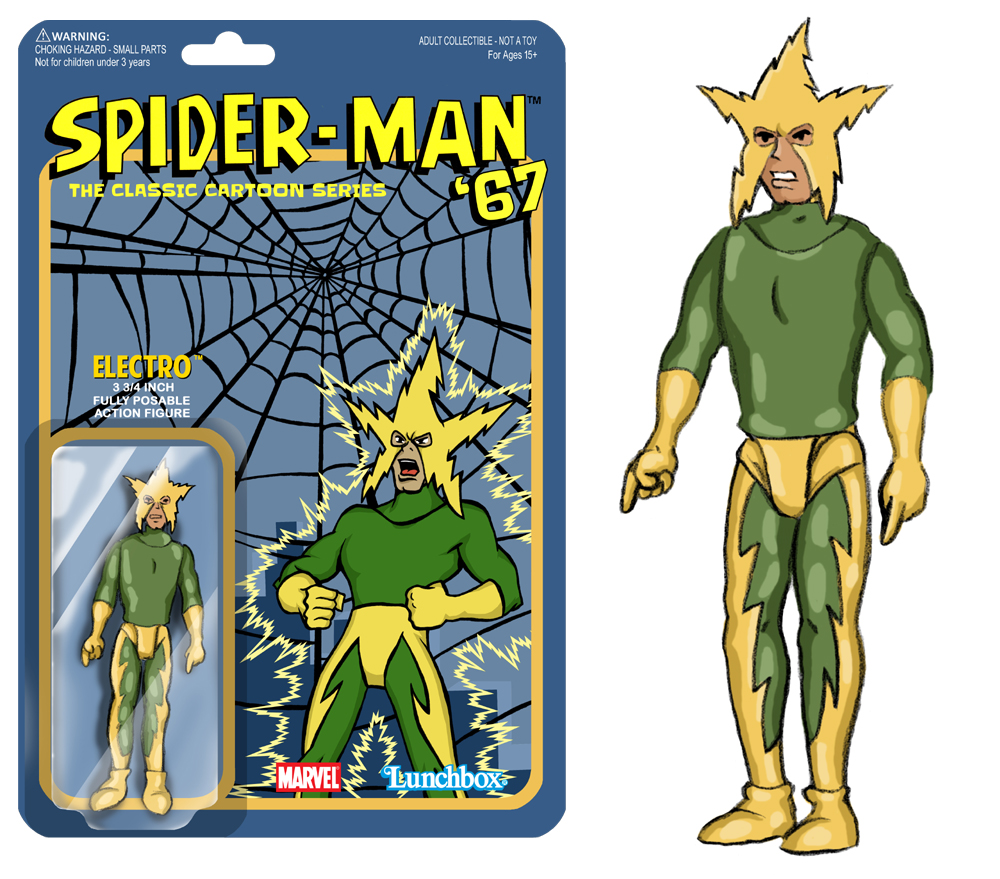 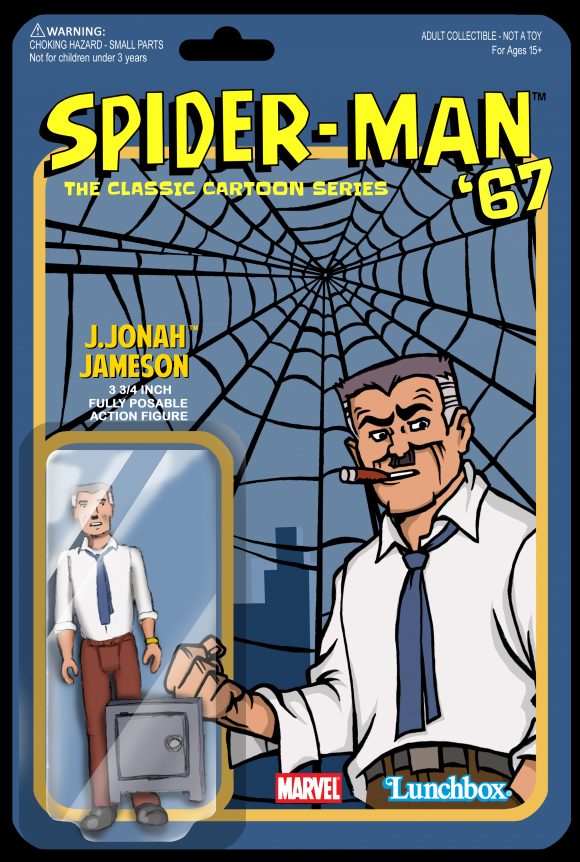 And Dailey even did card backs: 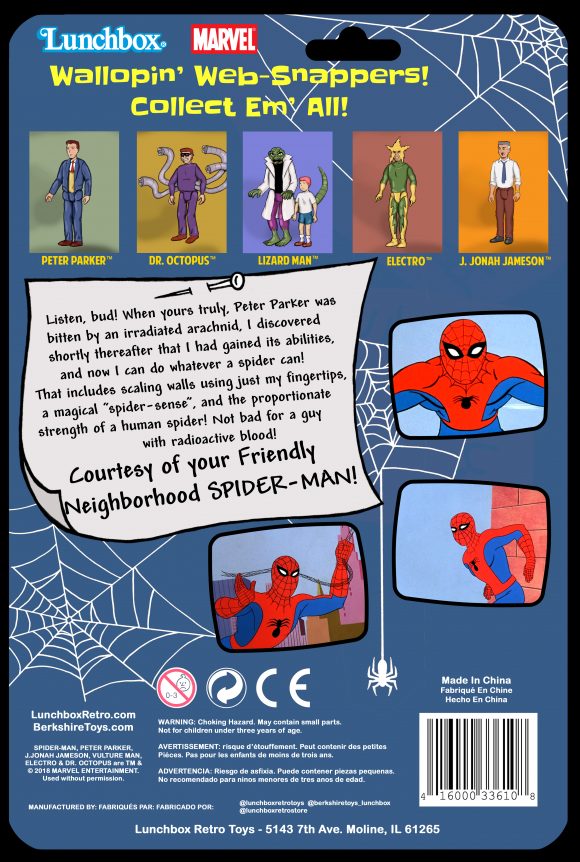 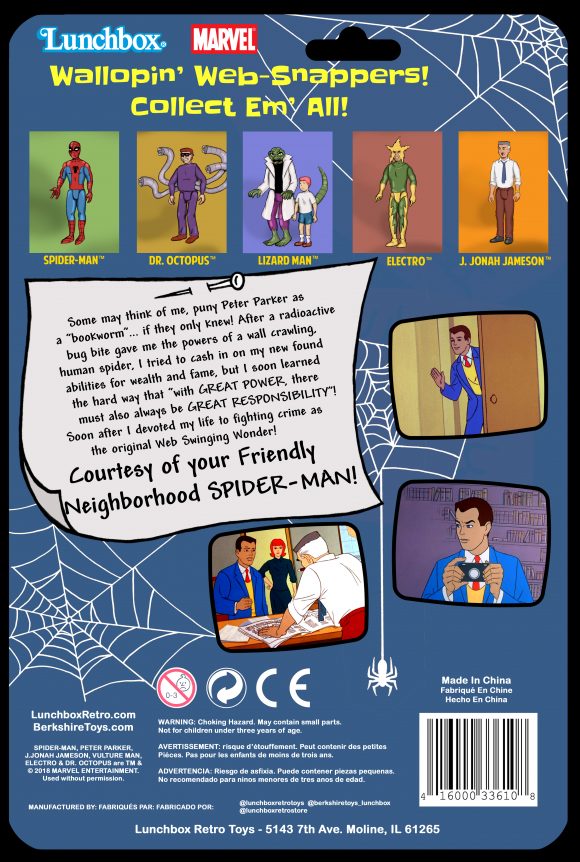 I’m gonna come right out and say it: This is brilliant, inventive work — and it’s all down to the details, like the webbing missing from Spidey’s torso, the accessories, Peter’s yellow sweater vest, “Lizard Man,” and Billy’s pink hair. (Hell, the fact that he included Billy to begin with!)

Not just that, the packaging is smart and attractive, with a design scheme that echoes the show’s graphic sensibilities.

“I’m a big fan of the classic Spidey cartoon, going back to my childhood in the early 1970s,” Brian told me. “I used to watch it on WSNS/Channel 44 out of Chicago. Growing up, when I would read Spider-Man comics, it was Paul Soles’ voice that I heard in my head. I’ve had bootleg copies of the episodes on VHS over the years, and in 2002 when the DVD box set of the series came out, I was at Walmart at midnight to get my copy. I helped the employee get them out of the case!”

That quote? I could have almost written it about myself, only swapping in WNEW/Channel 5 out of New York.

“With companies like Funko and Super7 putting out all of these great retro action figure lines, I figured Spider-Man ‘67 would be a great line, similar to the Batman 1966 line that Funko had released,” he continued. “I know Hasbro has the Marvel action figure license, but they don’t seem to be to interested in anything retro, although they have since proved me wrong more recently with Star Wars and Transformers re-releases. So, if nobody else was going to make my little dream toy line a reality, I decided to just do it myself.”

It’s worth pointing out that Diamond Select Toys also has a Marvel action-figure line, so who knows?

Anyway, what’s additionally impressive is that Brian took the time to consider how waves could be rolled out — and how variants could fill out the roster.

I mean, just dig the start of his Wave 2: 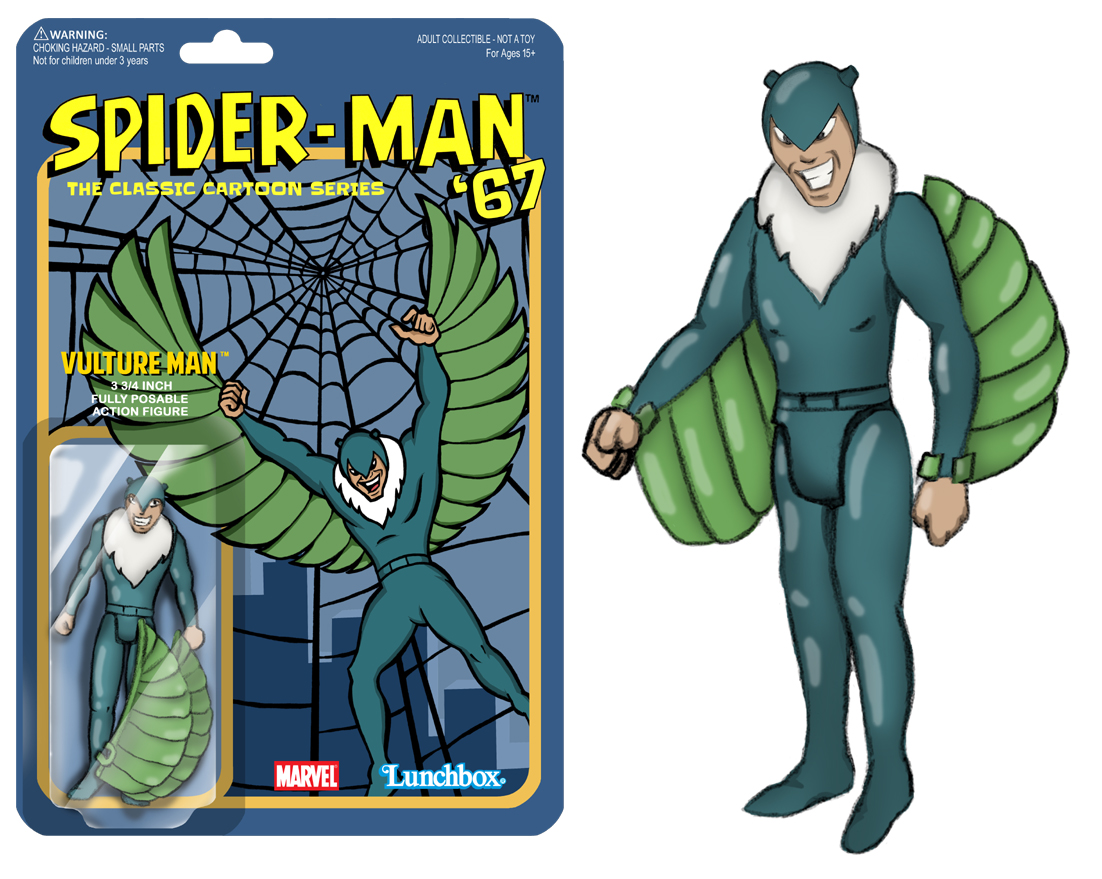 Oh, come on! Mysterio comes with the Flying Dutchman!

“I fancy myself somewhat of an artist, so I came up with a list of what characters I would like to see made, broke them down by how I thought toy manufacturers would divide up the assortments and just went from there,” Brian said. “I think of it as a ‘What If?’ situation: What if a toy company got a hold of this property — what would they do? What if I was in charge of that company — what would I do?”

I know what I would do. I’d buy every single one. Chances are if you’re reading this, so would you.

And as they say on your favorite schlocky commercials — but wait there’s more!

Brian has other, incomplete designs — and noted, “If I continue, Green Goblin would be in the next wave. My plan would be to keep going until I did figures of almost every character featured on the show, including Aunt May!” 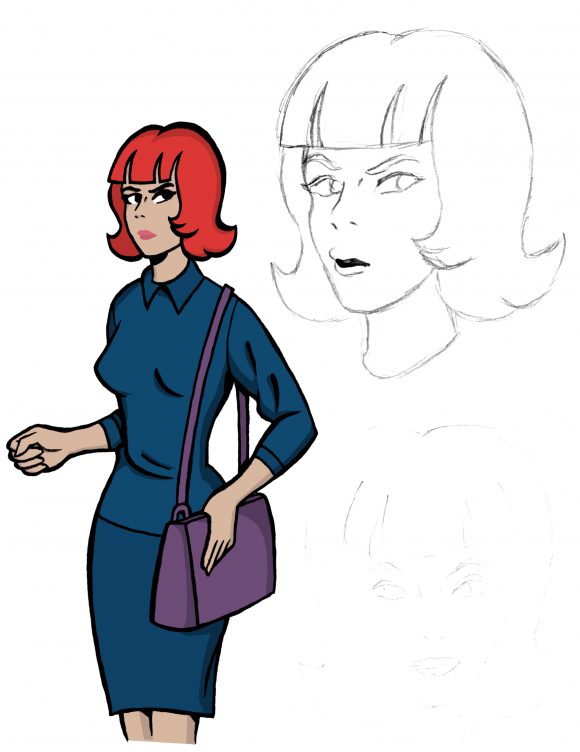 But frankly, no Spider-Man ’67 set would be complete without this guy: Get on that, Brian!