Labor Day weekend is a big one for weddings in the U.S. of A., so get ready for some supernuptials… 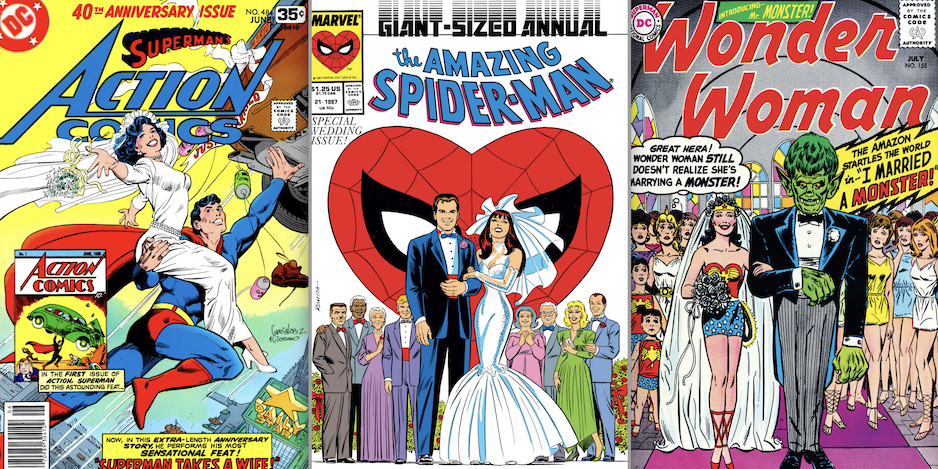 Comic book publishers are romantics at heart, I would suspect. DC and Marvel each published a line of love comics, to be sure, but they also inserted heartache and true bliss into their superhero comics. Who among us did not agonize with Peter Parker over his love for Liz, then Betty, then Gwen? The earliest weddings in comic books were imaginary stories, or elaborate plots to draw criminals out of hiding, or just a dream for one of the characters involved, but starting in the 1960s some weddings became real.

I am offering below a mixture of both worlds, 13 covers from the Silver Age until now. But when the officiant asks, “Does anyone object to these covers? Speak now or forever hold your peace,” PLEASE do not shout, “What about when Jimmy Olsen was marrying a gorilla?!”, “What about when Aunt May was about to marry Doc Ock?!”, “Where are Donna Troy’s nuptials?!”, and “What about when the Thing finally married Alicia Masters?!” Please know I have dozens more for a possible later piece or two. (There’s always Valentine’s Day! — Dan) 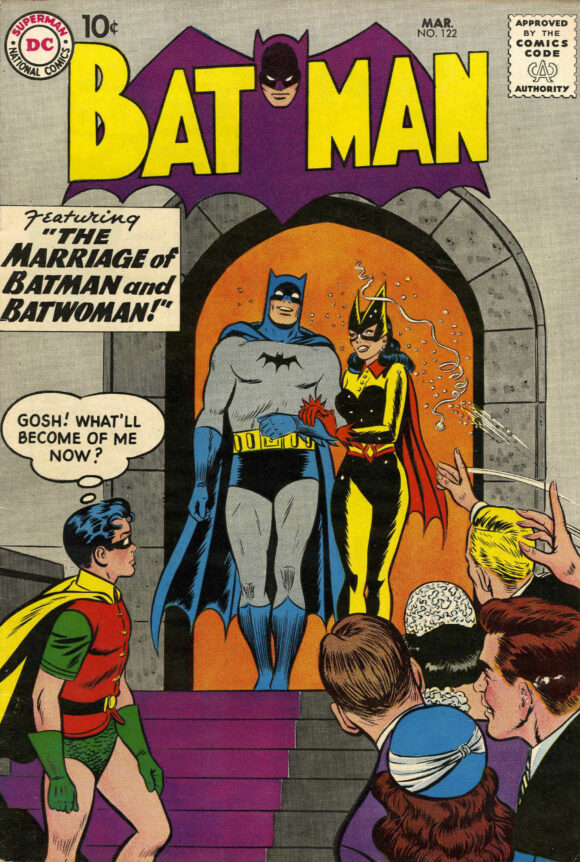 Aquaman #18 (Nov.-Dec. 1964, DC). Nick Cardy drew this great cover of the first time that a DC hero actually got married (not counting the already-married Hawkman and Hawkgirl). 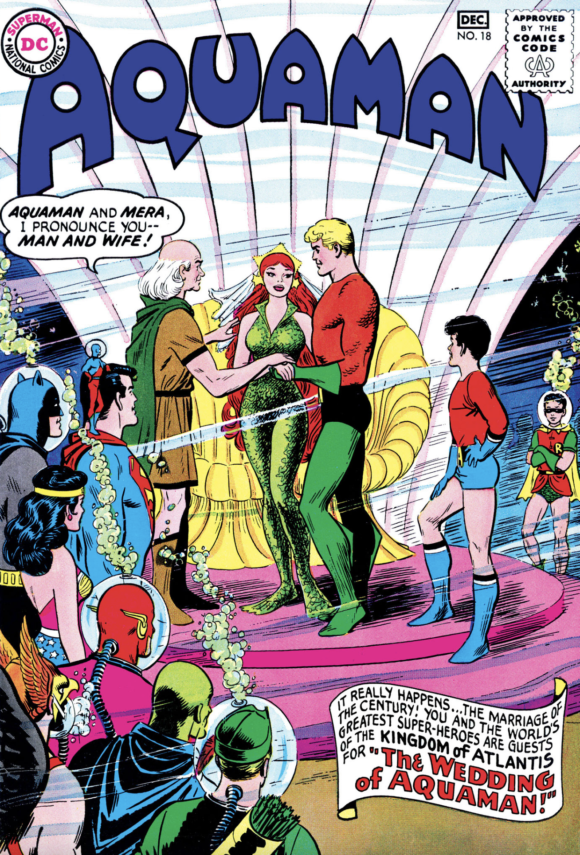 Fantastic Four Annual #3 (1964, Marvel). This incredible battle of superheroes and supervillains by Stan Lee and Jack Kirby was truly the Marvel Age of Comics at its zenith. Cover pencils by Kirby and inks by Mike Esposito. 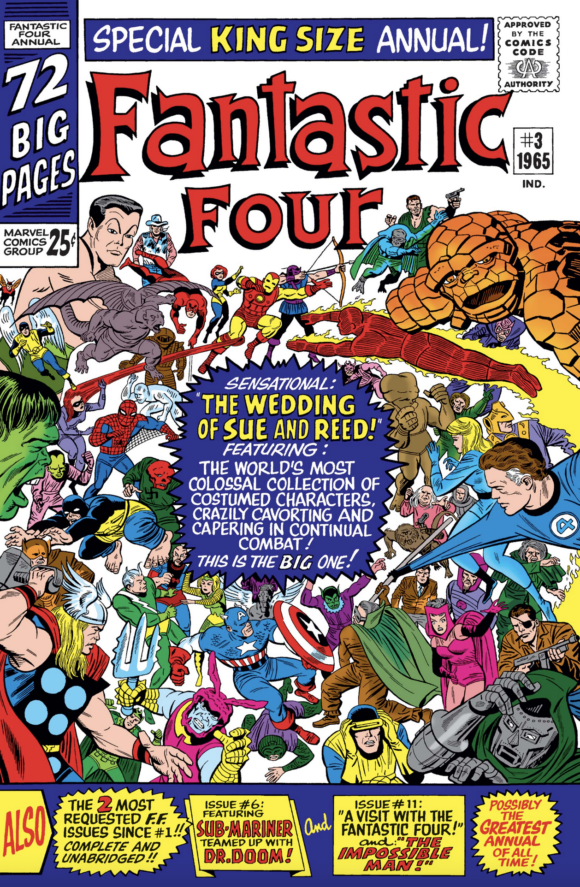 Superman’s Girl Friend, Lois Lane #58 (July 1965, DC). Lois gets back some of her own on this cover by Kurt Schaffenberger. 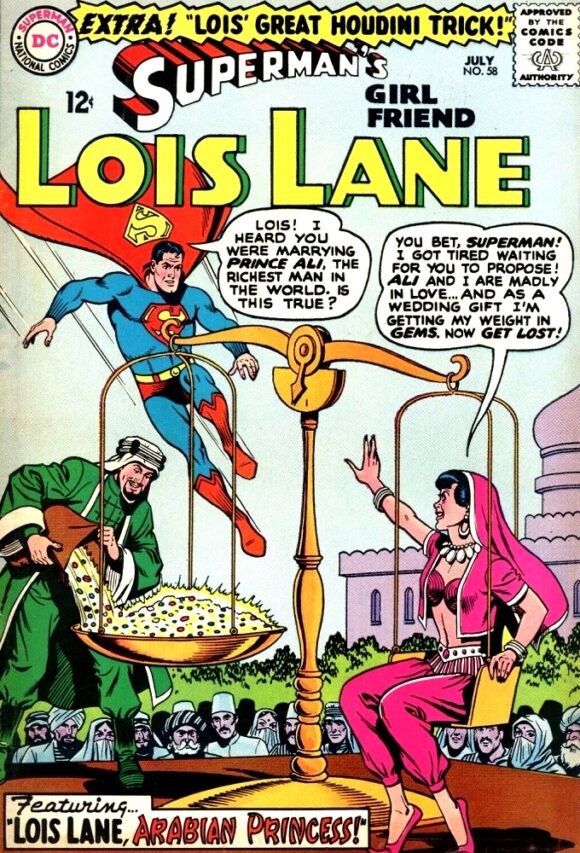 Wonder Woman #155 (July 1965, DC). In this modern-day retelling of “Beauty and the Beast,” her mother was wrong. Diana does know what he looks like and she loves him for himself. Cover by Ross Andru (pencils) and Mike Esposito (inks). 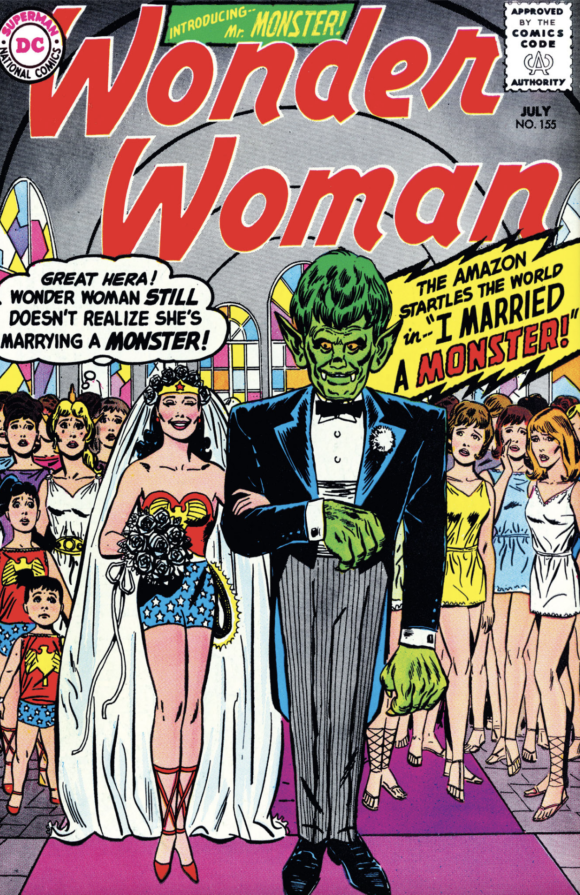 The Doom Patrol #104 (June 1966). Bob Brown’s cover’s captured the madness of Elasti-Girl trying to marry Mento. But the craziness isn’t the attack by the Brotherhood of Evil, but why she is choosing Mento, one of the most terrible heroes ever created. The cover blurb of “You said it could never happen!” should have been “You said it should never happen!” 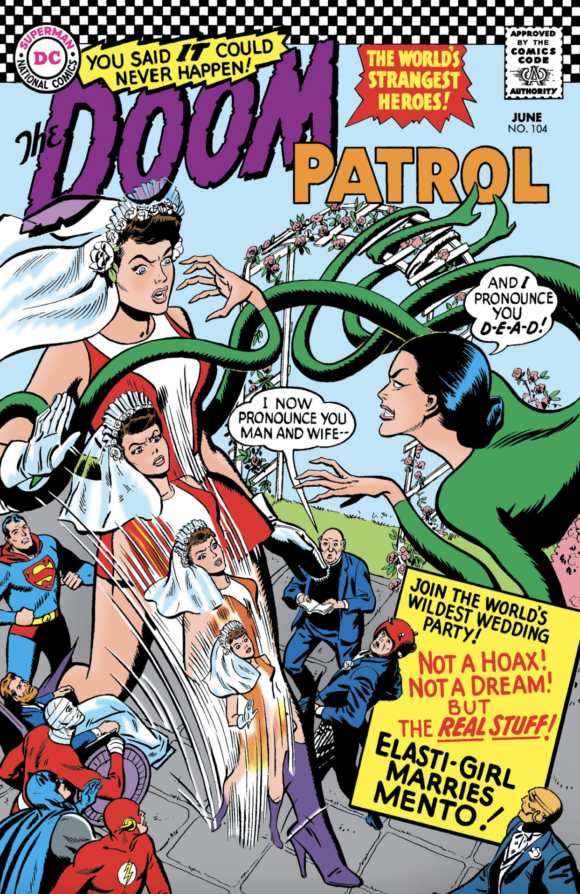 The Flash #165 (Nov. 1966). One Barry Allen and one Flash… but which one is Professor Zoom aka the Reverse-Flash? Cover by Murphy Anderson. 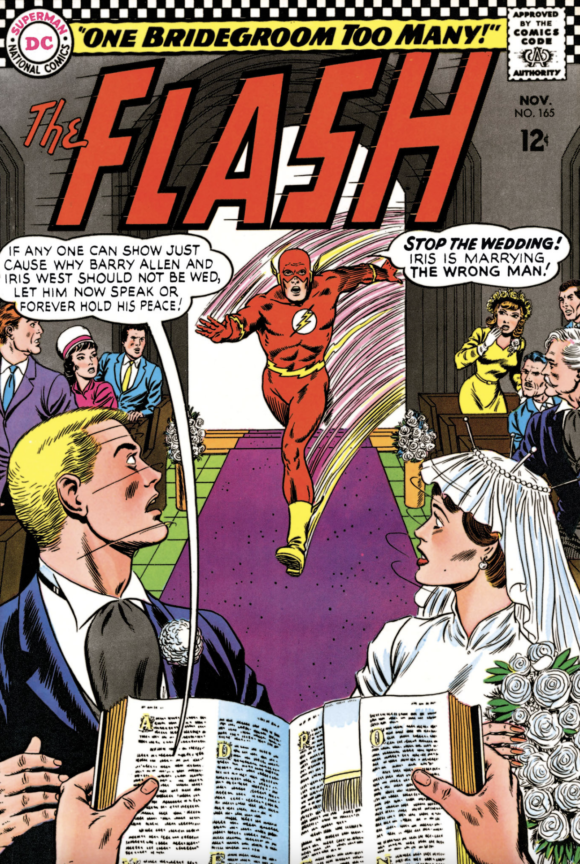 The Avengers #60 (Jan. 1969). The Circus of Crime tries to bomb the wedding of Janet Van Dyne (the Wasp) and Yellowjacket (aka Ant-Man/Giant-Man/Goliath/Henry Pym) with all the Avengers present. Big mistake! Cover pencils by John Buscema (with alterations by John Romita) and inks by George Klein (and Romita). 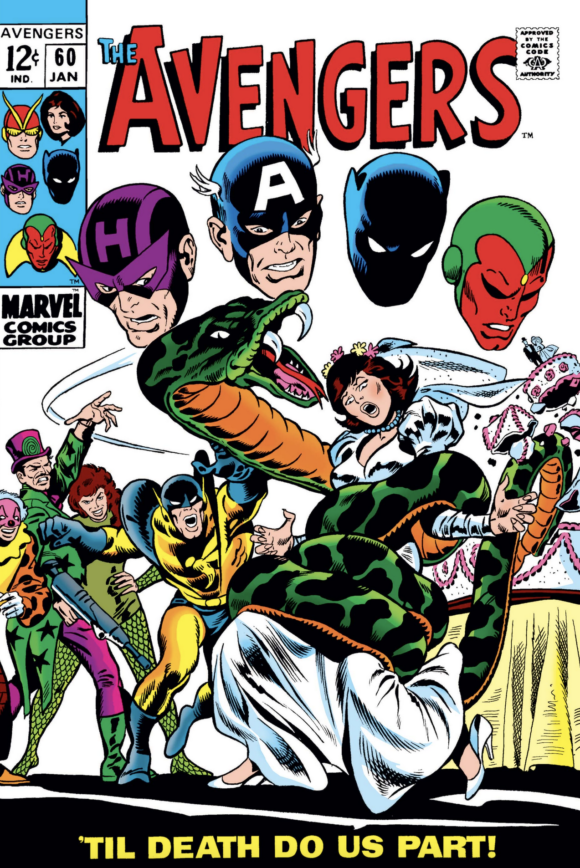 Action Comics #484 (June 1978). After 40 years, Superman and Lois finally tie the knot. For real. The only thing is that DC makes this about the original Superman (Kal-L) and Lois Lane who had been introduced in 1938 (also known as the Earth-Two Lois and Clark). The excellent cover is by José Luis García-López (pencils) and Dick Giordano (inks). 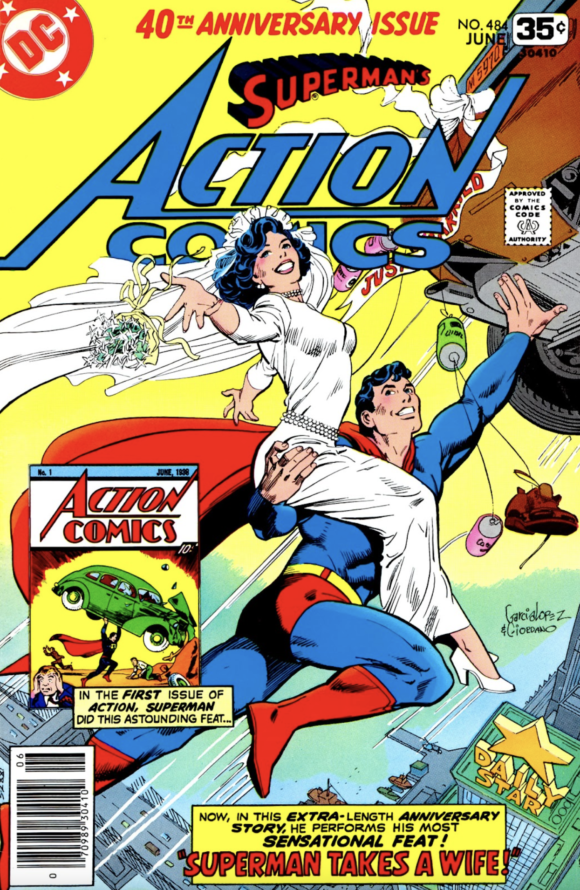 The Amazing Spider-Man Annual #21 (Sept. 1987). In a nice change of pace, no superheroes or villains are present at the wedding of Peter and Mary Jane. They get to say their “I do’s” just surrounded by their friends and family. Even J. Jonah Jameson weeps. Cover by John Romita. 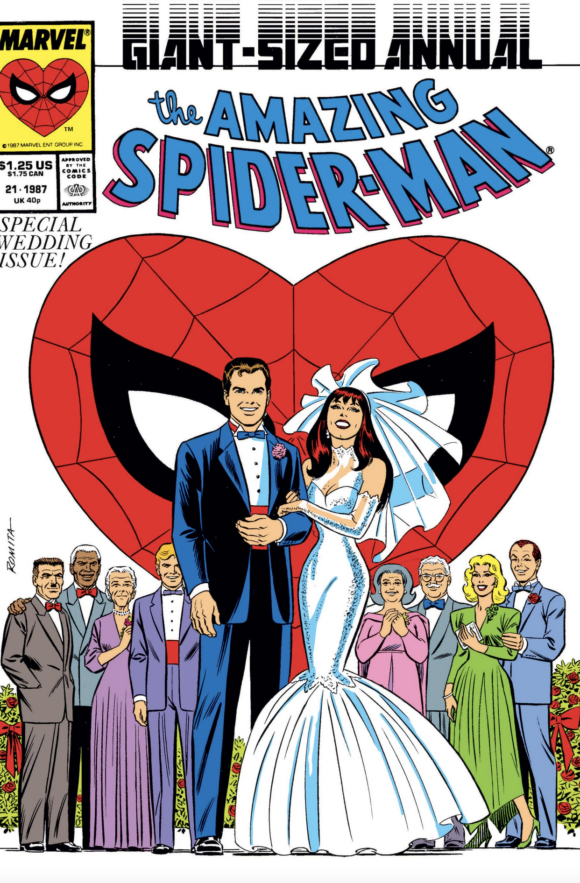 X-Men #30 (Mar. 1994). This cover and the inside story by Andy Kubert (pencils) and Matthew Ryan (inks) may well be the most spectacularly drawn wedding issue of them all. Since way back in 1964 when he first met her, Scott and Jean silently loved each other. It’s nice to know some things can have a happy ending. 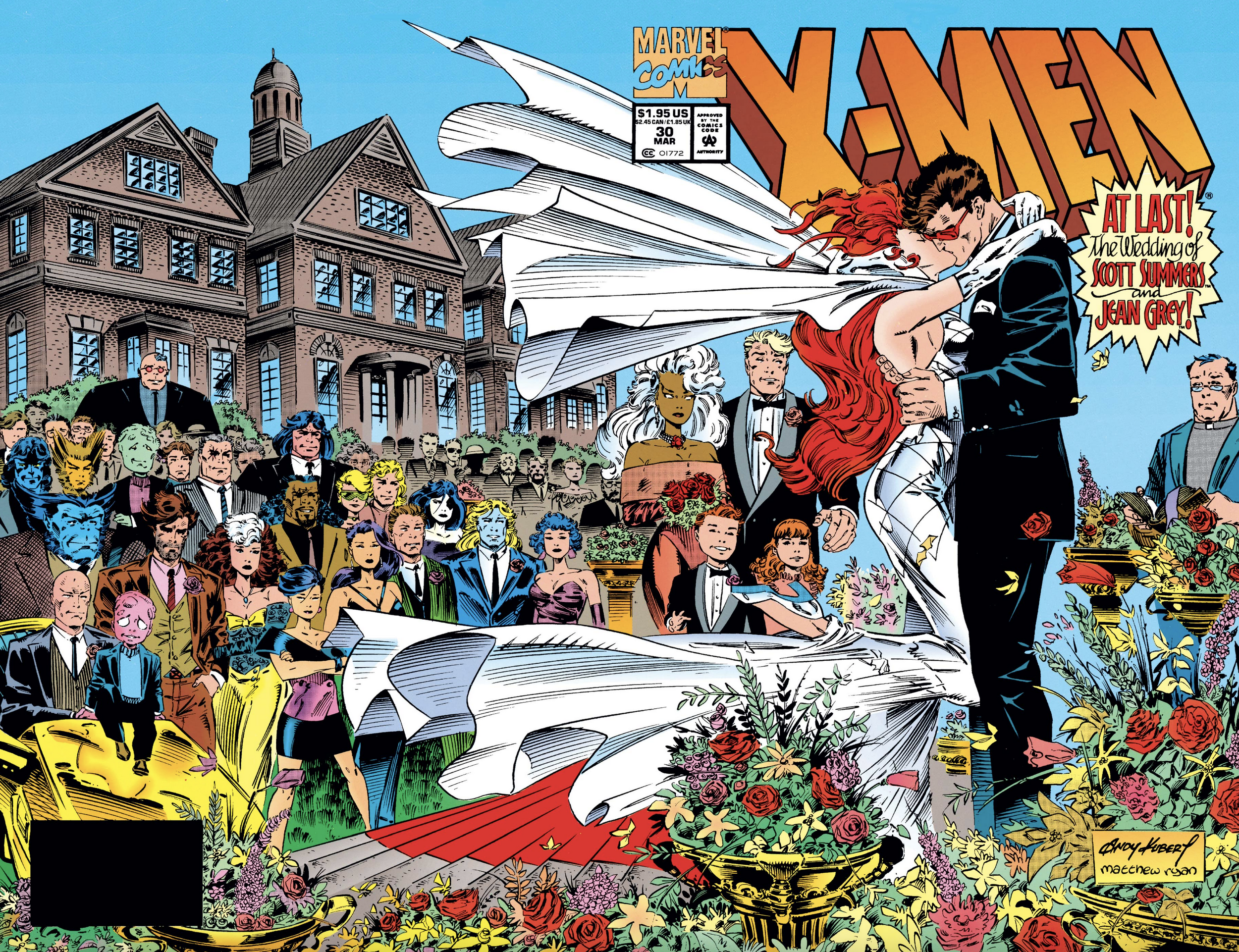 Superman: The Wedding Album #1 (Dec. 1996). This time it is the Clark Kent and Lois Lane we grew up with, and a more soul-satisfying wedding ceremony there could never be. John Byrne did the cover and a multitude of writers and artists came together to make this the big one. Astonishing X-Men #51 (Aug. 2012). Northstar and Kyle Jinadu tie the knot, establishing that in comics, too, when two people love each other it doesn’t matter what gender they are. Cover art by Dustin Weaver.