SPIDER-MAN’s 1980s Roller-Coaster: A Gang War, a Wedding and a Funeral

THE SPIDER’S WEB: A lot happened to Spider-Man before Kraven’s Last Hunt…

Hey Web-Spinners: Hope you’re hanging in there amid all the madness in the world. Let’s escape for a minute into the life of one Peter Parker, eh?

Last time we chatted, we spotlighted the vastly underrated Tom DeFalco/Ron Frenz run on Amazing Spider-Man, and did a few detours to cover things like the classic Death of Jean DeWolff storyline in sister series Peter Parker, the Spectacular Spider-Man.

We touched on how DeFalco and Frenz had a rocky end to their run, which resulted in a more awkward exit to one of the better creative teams in recent memory. That was a bummer to experience as a reader, and made for a few plot speed bumps along the way. Let’s address those really fast before we get to the good stuff: 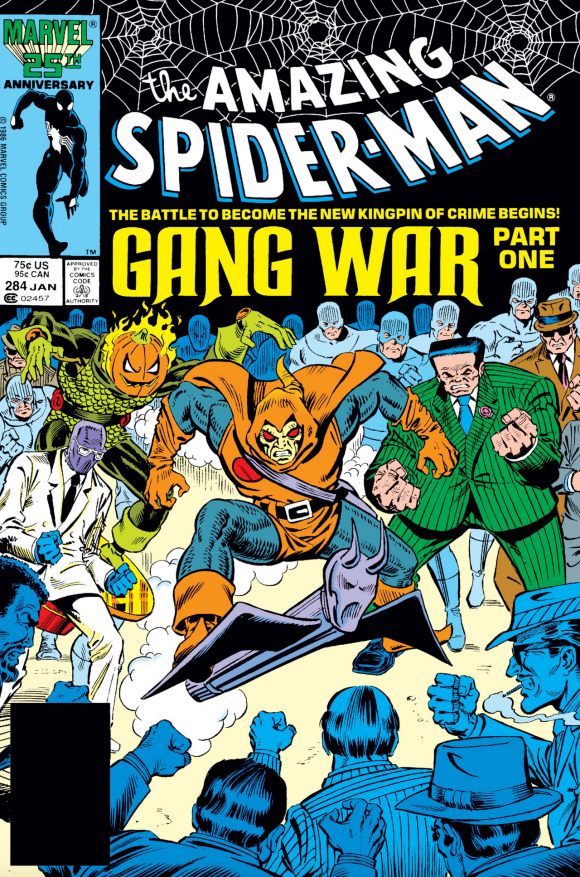 So, as DeFalco and Frenz departed, ex-Spidey Group Editor Jim Owsley (now known as Christopher Priest) took over for a short spell, writing over some DeFalco plots and crafting the 1986-87 Gang War storyline, which brought to a head many of the organized crime threads bubbling around the Spider-Man books over the last year or so, and tying into Daredevil’s Born Again story — which ended with the Kingpin leaving the country.

In the wake of the Kingpin’s departure, a handful of bosses tried to step in to fill the vacuum, including the Rose (who we soon learn is Richard Fisk, son of the Kingpin!), Hammerhead, a cyborg Silvermane (IIRC he became a cyborg toward the end of Mantlo’s run on PPSSM, which was not part of this reread), and “the Arranger,” Kingpin’s right-hand man, who we only happen to see during his appearances in Spider-Man books. (I could be wrong, but I don’t remember him showing up during Born Again, which makes his importance harder to swallow. Anyway.) 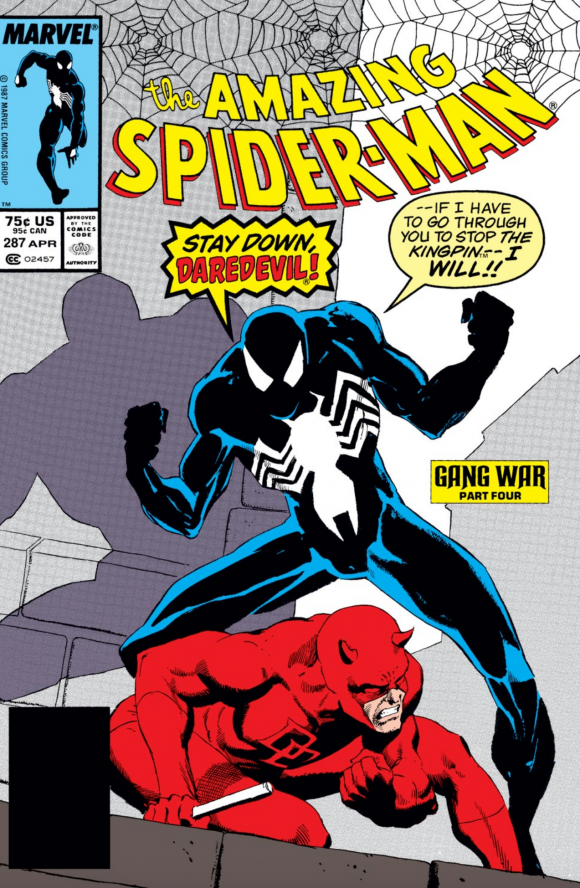 I’ll be honest, readers: The Gang War story is a rough ride, and very much not essential. The big reveals — that Fisk is the Rose, for example — are unfurled in passing and not a lot changes, beyond tons of fights before the Kingpin eventually returns, reestablishing the status quo. There’s a lot of red herring action, though, as Owsley teases potential identities for the Hobgoblin — Flash Thompson, Lance Bannon, Ned Leeds — but it doesn’t really come together as I think they hoped. It feels very transitional, like the team was treading water until the next big event was locked in. Whether that was intentional or not, that’s pretty much what happened. But not before some major fireworks.

At first blush, the 1986 one-shot Spider-Man vs. Wolverine feels like your standard crossover adventure. Heroes cross paths. Heroes disagree. Punches are thrown. Reconciliation. Heroes team up to defeat a common foe. But this comic is much more than that.

Good pal and comic writer Fred Van Lente (a fellow 13th Dimension contributor) mentioned when I posted about the weird, subversive vibe of the comic on Twitter, that this issue was the first comic that “felt like Priest.” I can totally see that, as it evokes a more noir and complicated feeling than his earlier Spider-Man work, which comes off as much fairly perfunctory and generic. Spider-Man vs. Wolverine is darker, moodier, and has greater stakes. The story is much less about the A plot — Spider-Man and Wolverine battle in Germany over the fate of Wolvie’s old flame, a criminal named Charlemagne — and more about the feeling. 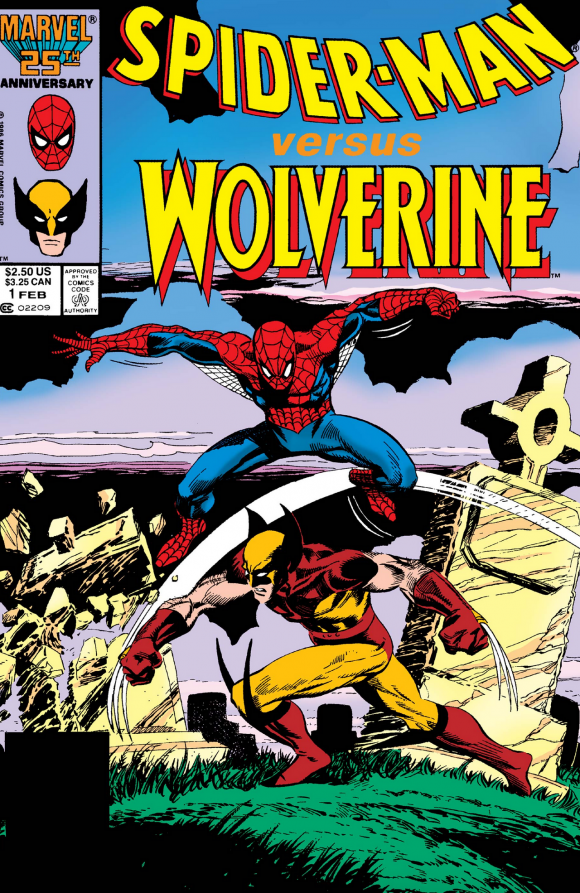 It’s a startling accomplishment, for a number of reasons — Spider-Man, by this point, has been around so long that some might find it hard to inject anything new into the character. Priest also was relatively young by the time this was written, too. Third, it was a particularly convoluted time for the wall-crawler, yet the story finds a way to synthesize it all and tell a complete, compelling story. But it wasn’t without problems, either.

I’m going to skip the spoiler warnings because these comics came out 30-plus years ago, but most Spider-fans know that this comic featured the death of Ned Leeds, who at that point was just a supporting cast member who was married to Pete’s ex-flame, Betty Brant. Leeds had, admittedly, been acting weird lately — and was being used as one of many red herrings for the Hobgoblin. But his death started the process of Ned Leeds being revealed as the Hobgoblin. Just not directly in this issue. Why? Well…

There’s a lot of backstage drama to this story — which we’ve touched on in the past. Roger Stern intended for Hobgoblin to be Roderick Kingsley (and got to retcon this into existence with The Hobgoblin Lives! miniseries, a decade later). At one point, Tom DeFalco wanted Richard Fisk to be the Hobgoblin. DeFalco told Owsley at a Spider-Man writers’ conference he intended for Ned Leeds to be the Hobgoblin. You see where this is going? It wasn’t set in stone. I suggest you read Glenn Greenberg’s detailed and comprehensive history of the Hobgoblin in Back Issue #35, which you can order here. 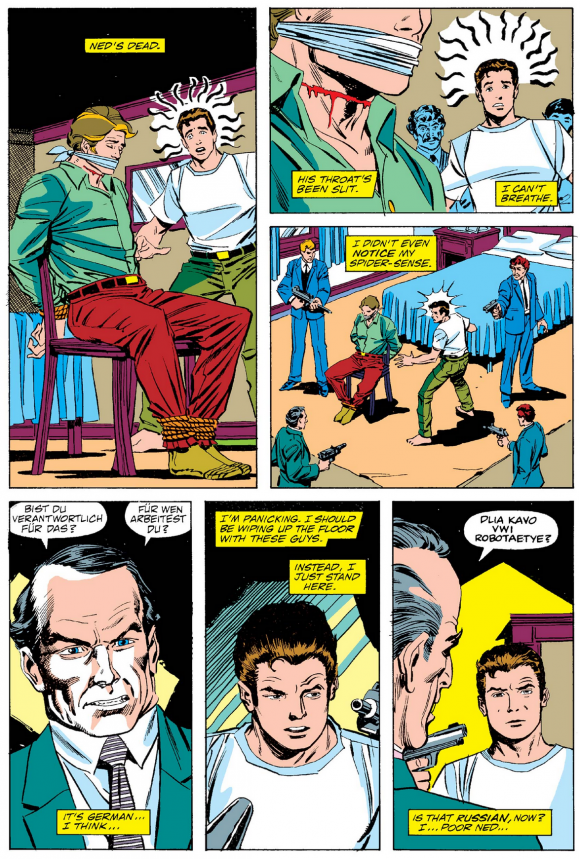 For the purposes of this column, the Hobgoblin’s identity was TBD, but Spider-Man vs. Wolverine threw a curveball into the equation, as it featured the ideal candidate being murdered by mysterious assassins. It also created a huge mess for someone to clean up, plot-wise.

That person was Peter David, who’d just knocked it out of the park with the aforementioned Death of Jean DeWolff story and now had to, in the next issue of Amazing Spider-Man (#289), recap the truth about Ned, which is revealed to readers (and Spidey!) via a “secret dossier” the Kingpin happens to have. The long and short of it? Ned was the Hobgoblin and Jack O’Lantern hired the Foreigner to off him so JOL could take over the Hobgoblin persona, apparently feeling like he needed an upgrade. Everyone in the story was in shock, as were the people creating it. The issue was a well-crafted Band-Aid to a gaping bullet wound but it got the job done.

The Leeds revelation leads into another (seemingly) hasty tale, this time a three-parter by Spidey vet David Micheline, John Romita Jr. and Alex Saviuk. It features the return of the Spider-Slayers, but that’s far from the point. Micheline doesn’t beat around the bush — this story is built to set up something much bigger: Peter Parker’s wedding to Mary Jane Watson. 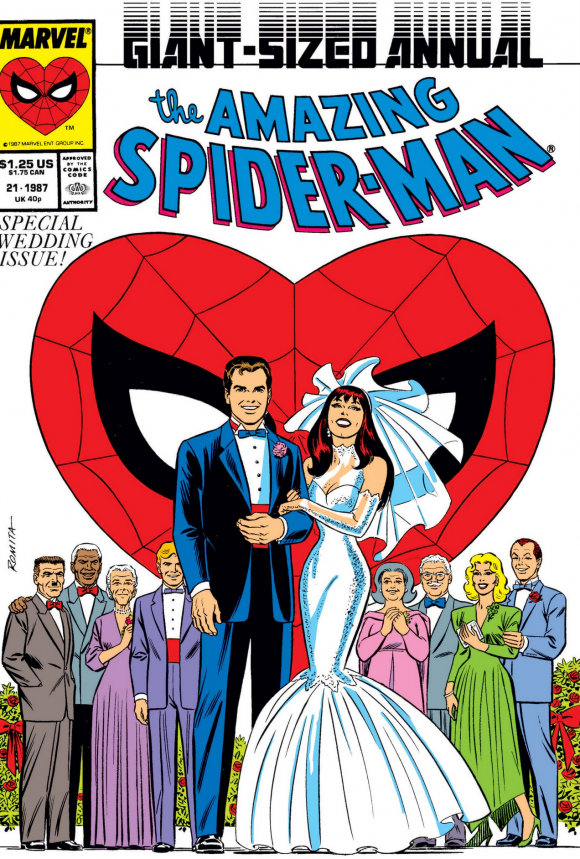 As the story goes, Spider-Man co-creator Stan Lee, now writing the daily Spidey comic strip while out in Hollywood, thought it’d be a good idea to have Peter and MJ get married in the newspaper strip. This spurred the editorial team at Marvel proper to fast-track the storyline in the comics, which resulted in the well-done Micheline issues, which are beautifully rendered by a returning JRJR (and savvy vet, Saviuk), almost tricking the reader into believing this was what was intended to happen. If the creators had more room to play with, Pete’s initial (rejected) proposal would make sense, and MJ’s evolution from sort-of friend to true love might ring more authentic. As it stands, it feels a bit rushed, but in the hands of pros like Micheline and co., it almost comes together.

The wedding itself, in a story aptly titled “The Wedding,” in Amazing Spider-Man Annual #21, is also fairly solid — with Micheline writing off a Jim Shooter plot, and more-than-capable art by veteran Paul Ryan. Micheline manages to make the best of what he’s given — keeping an eye toward the historic nature of the story and, perhaps, auditioning for the gig as the main Amazing writer, too — while keeping the story true to the characters and history. 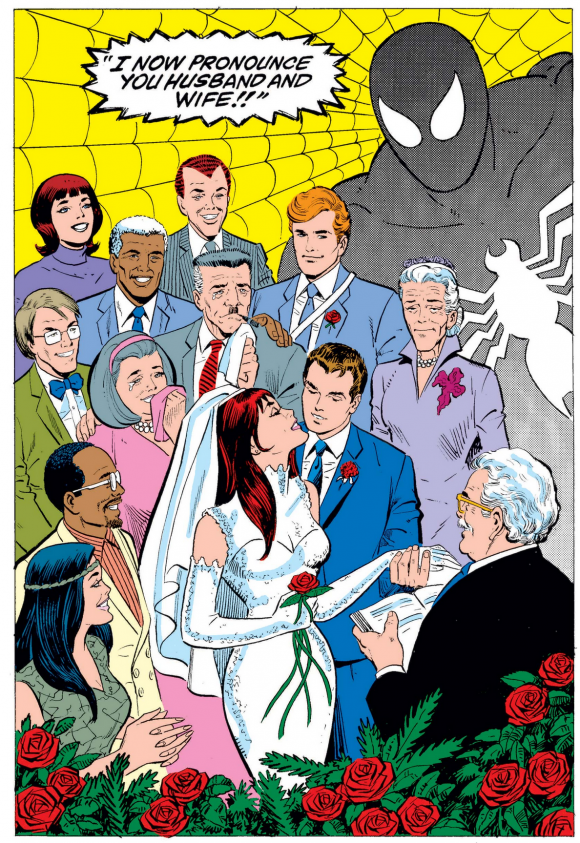 We’re actually hitting a fairly interesting point for me as a reader, where I catch up with the comics I’d started reading as a fan. Michelinie wrote many of those tales, and I was reminded of his solid, character-driven stories that still managed to be packed with action and fun subplots.

A few quick things before we go:

— The Gang War story features Daredevil impersonating Kingpin in an effort to trick Spider-Man into… fighting him? Yeah. Daredevil in a fat suit! That happened. A low point in a story that is very much a low point. 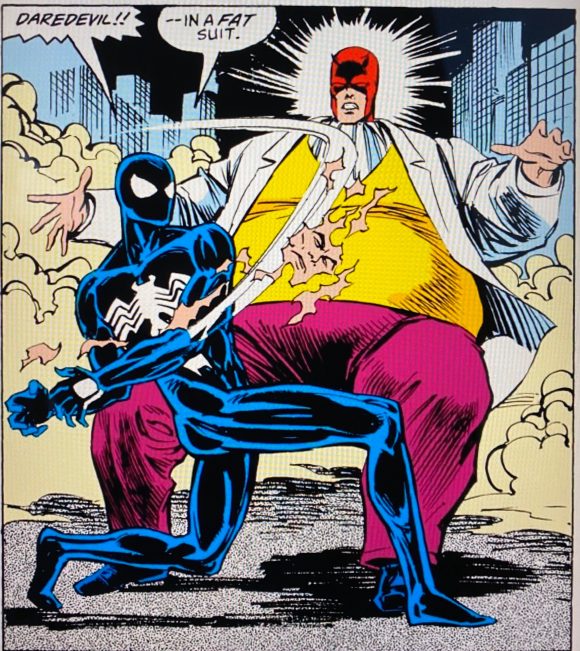 — The quick transition of Jason Macendale (Jack O’Lantern) to becoming the new Hobgoblin feels rushed, but we actually won’t see him again (meaningfully) until Inferno, the X-Men crossover that tied into the Spider-books and saw Macendale possessed. So, yeah. Something to look forward to! Even in his earliest appearances as HG, it’s clear the creators were trying to make the case that Macendale was tougher than Leeds, but it just didn’t stick.

— If you read the aforementioned Back Issue story by Greenberg, you’ll see DeFalco had a lot of plans for Richard Fisk as the Rose, which were trimmed by editorial. In any event, in the wake of DeFalco’s departure, Owsley spent a lot of time giving Fisk a backstory, involving a mysterious friend named Alfredo and a lover named Dana. Owsley stepped in to write the Gang War story and a few issues of Web of Spider-Man, which seemed to focus on fleshing out and retrofitting not only Fisk’s motivations, but his relationship with Leeds. 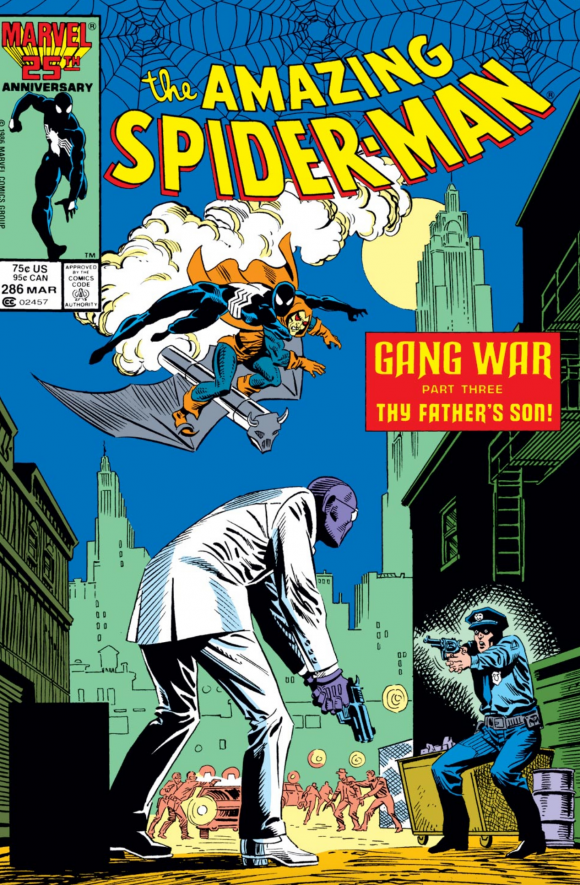 The genius of it all, though, is how smart Roger Stern was in tying it all together when he finally returned to the characters and reestablished Kingsley as the one, true Hobgoblin. That’s the fun of this reread — being able to zoom out a bit and see the broader strokes while still enjoying the stories in the trenches.

— A testament to how quickly the Spidey wedding came together? Amazing Spider-Man #289, in which Peter David tried to make sense of the mess that had been wrought in the wake of Ned Leeds’ death, closes the issue with Spider-Man coming home to Black Cat, his on-again, off-again lover who happened to be crashing in his apartment (there was some tension, during the final DeFalco issues, between MJ and BC, too — as it seemed like DeFalco was trying to reestablish the Pete/MJ connection, after spending a lot of time on rehabbing MJ’s character). The next issue Peter proposes to Mary Jane, who up until that point had been trying to be Peter’s friend (there was an awkward kiss in Spider-Man vs. Wolverine that seemed to really mess Peter up). By the end of the three issues by Micheline, the two are professing their love for each other and planning marriage. Not judging here, but that was fast! 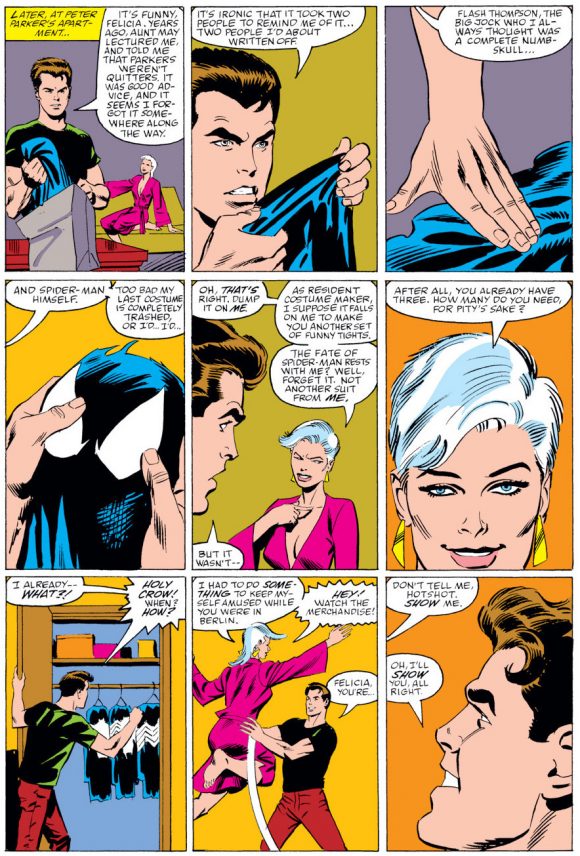 — We get a peek at Spidey vet Erik Larsen during the Gang War story. Larsen drew the first Spider-Man comic I ever bought on my own, Amazing Spider-Man #348.

— The Flash Thompson threads get resolved fast — with his lover Betty Brant spiraling into insanity and any legal issues stemming from the idea that he was the Hobgoblin disappearing in less than a page!

— We’re on he cusp of a long, fun period of stability for the main Spidey books, with Michelinie stepping in on Amazing and (eventually) Gerry Conway on Spectacular. I may hop between both series once we get clear of Kraven’s Last Hunt and the subsequent Mad Dog Ward story by Annie Nocenti.

— NEXT TIME: Kraven’s Last Hunt – the classic by J.M. DeMatteis and Mike Zeck — which was originally scheduled for this column.