Hey, guess what: Batman debuted 82 years ago on March 30, 1939! To celebrate this offbeat anniversary — 82 is hardly a round number — we bring you recurring contributor and fellow Batexpert Mark S. Reinhart with 13 OFFBEAT BATMAN COLLECTIBLES. I wasn’t quite 2 years old when the Batman TV series premiered in January 1966, and I started hanging onto whatever Batman merchandise I was given right at that point in my life. Thanks to my ongoing Batman obsession and my parents’ kind indulgence, many of these items have stayed with me throughout my 56 years. A life of collecting Batman has brought me some unusual things, and I thought it would be fun to share 13 items that I consider to be kind of off the beaten path.

There is a common theme to some of the pre-1970s items. Even as a little kid, I was fascinated by Batman stuff that captured him as a darker, more serious hero. Strangely, I guess I was drawn to a vision of the character that reflected Bob Kane and Bill Finger’s original creation before I even knew their first Batman comic stories existed!

Here, then are 13 OFFBEAT BATMAN COLLECTIBLES, in no particular order:

Batman infant’s bib, 1966. There’s nothing dark or serious about this first item. Yes, this bib was mine, and I used it when I was a baby. My parents never got rid of it because I simply liked looking at its colorful Batman image even when I didn’t need to use it anymore. But even as a toddler, I remember being annoyed that the colors on Batman and Robin’s costumes weren’t true to the costumes of the TV show! 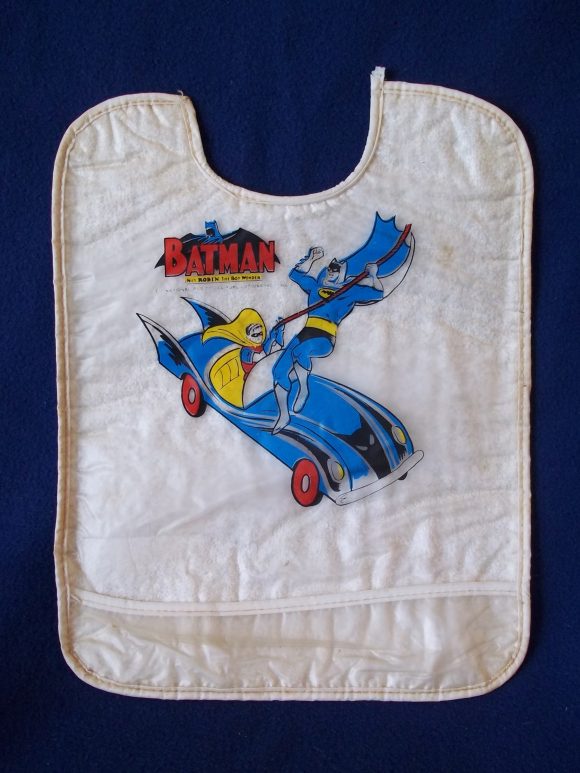 Batman kid’s dinner plate, 1966. The same goes for this plastic dinner plate in terms of not being dark or serious. And it was also something I used when I was a very little kid. This image of the characters was pulled from the cover of the classic comic book Batman Annual #1, Summer 1961. The only change that needed to be made from comic to plate was putting a yellow oval around the bat symbol on Batman’s costume in order to update him to his post-1964 “New Look” self. Because this plate was made of plastic, it survived numerous drops and moves from house to house. 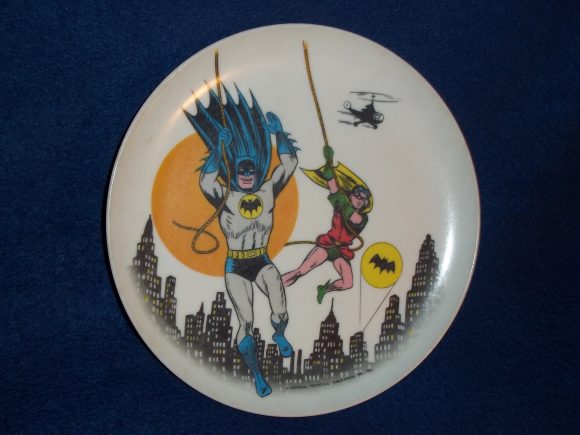 Batman kite, 1966. Now THIS is an item that I always felt captured Batman in a more serious manner. Featuring incredible art by Carmine Infantino (or possibly Murphy Anderson), this kite seemed to show Batman in a moment of action, and the expression on his face is hard to read. He’s not smiling, he’s not angry, he’s just BATMAN. I don’t remember ever seeing this kite in the air, but I know we must have flown it because it’s kind of beat-up. What I remember most about it is that my dad hung it on a cinder-block wall in our basement, and my preschool self thought that it made such a cool poster. I still think that! Batman pennant, 1966. We got this pennant at a small amusement park by the Columbus Zoo, and like our kite, it hung on a wall in our basement. The pennant’s image of Batman and Robin was adapted from the cover of Batman #179, cover-dated March 1966.

That comic cover featured the characters in the background behind a close-up view of the Riddler. It is fun to see this image enlarged and moved to the front and center. 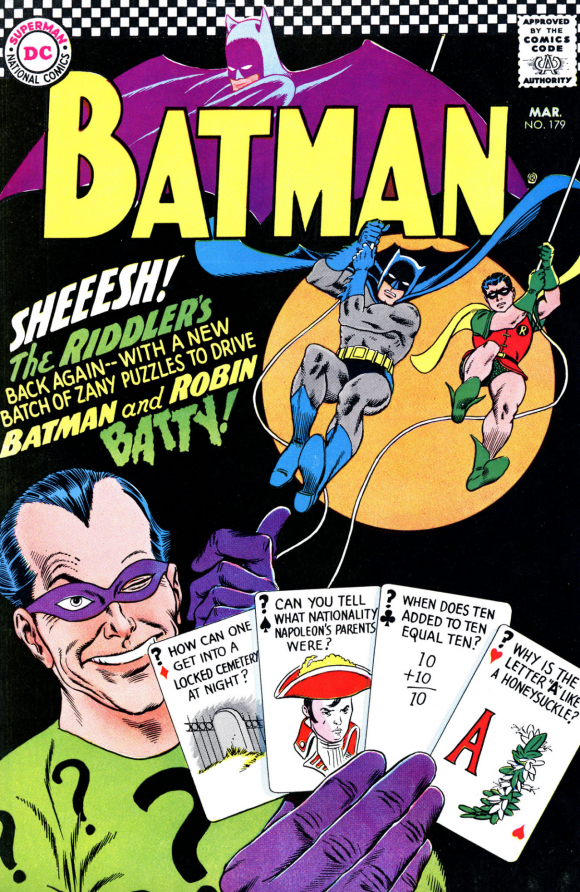 Transogram Flying Batman slingshot toy, 1966. This is another item that I always felt captured Batman in a more serious manner. It did not feature the “New Look” Batman insignia with the yellow oval, so it seemed to harken back to the character’s early days. The old-school bat insignia and unsmiling face made Batman look grim and mysterious. I never shot my Flying Batman into the air — I just held it in my hand while I was running, imagining that Batman was leaping from rooftop to rooftop. 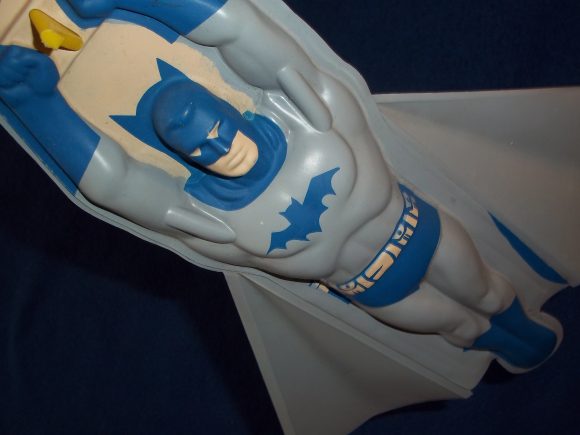 Incidentally, this being a flying toy, it really made far more sense as a Superman item — and that is just what it originally was. The Transogram Superman was first manufactured in 1954, and it was repurposed as a Batman item during the massive wave of Batmania in 1966. You can see Superman’s hairline in there.

Transogram Batman bank, 1966. Transogram made a number of cool Batman items in 1966 other than the Flying Batman. Their Batman bank stood at 19 inches tall, making it one of the largest figural items from that time period. Again, this particular piece always looked like an imposing, serious interpretation of the character to me. 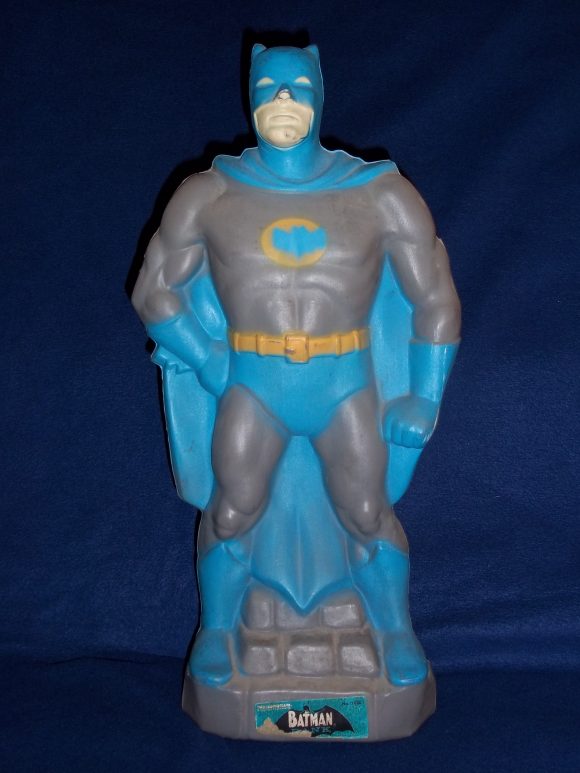 In fact, I think it looks a lot like the Batman image on the cover of the Batman: The Dark Knight Returns 1986 trade paperback. 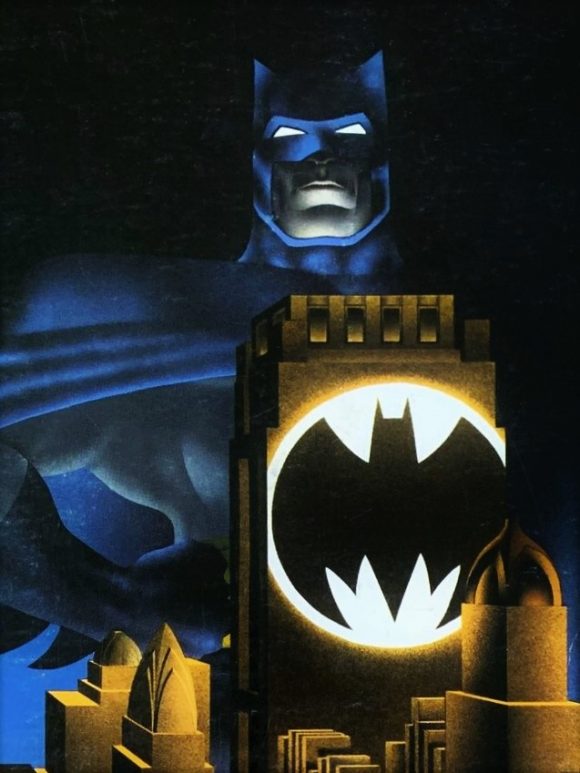 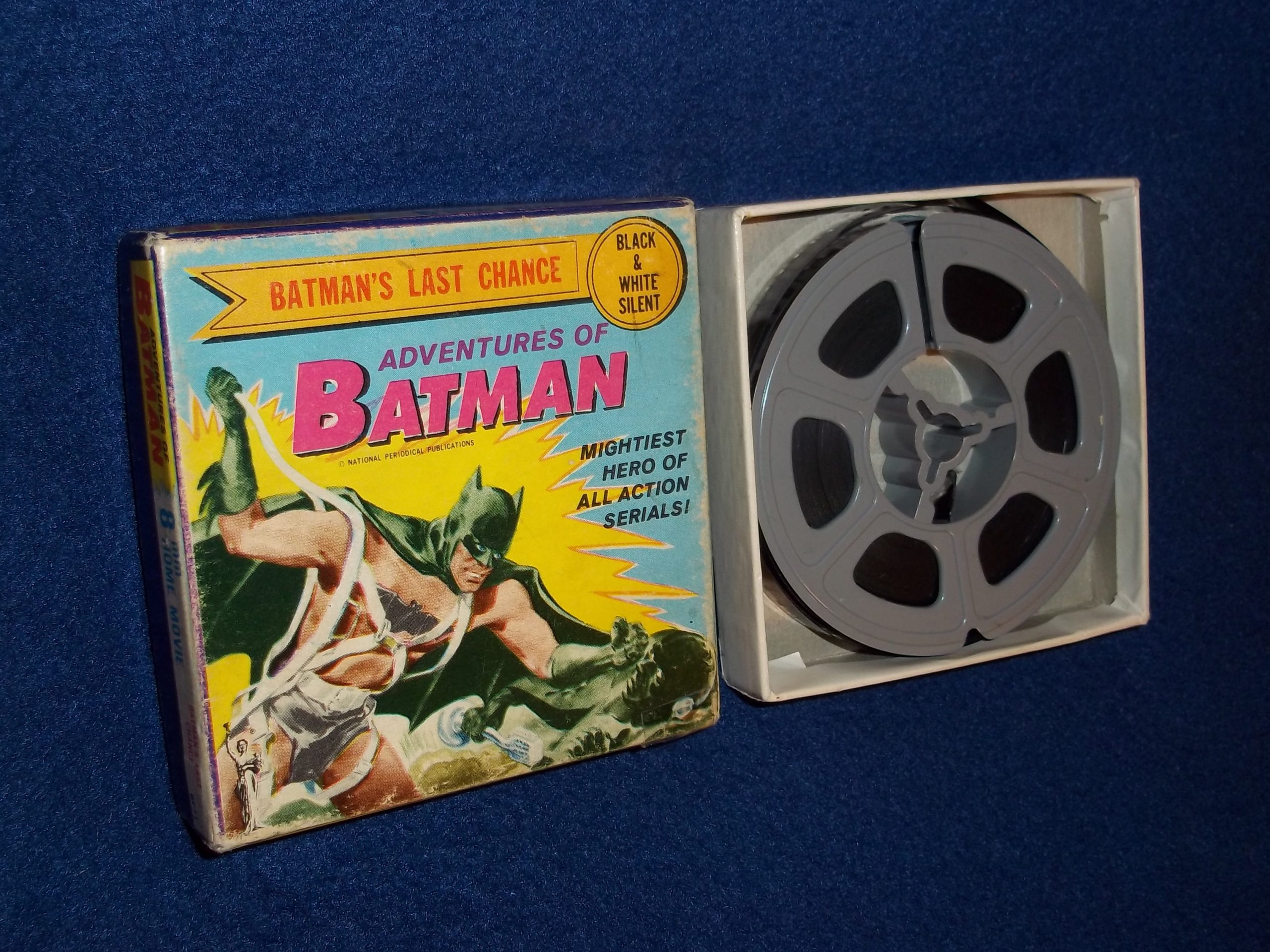 Here’s some backstory on how this film came to exist. After the success of the Batman TV show, Columbia Pictures edited the 1943 Batman into a roughly hour-long, silent, six-chapter version titled The Adventures of Batman, and offered it for sale on 8mm and Super 8mm film at stores throughout the country. In addition to the six chapters, Columbia released “Batman’s Last Chance,” presumably for people who were interested in owning a Batman movie, but not interested enough to buy multiple reels. 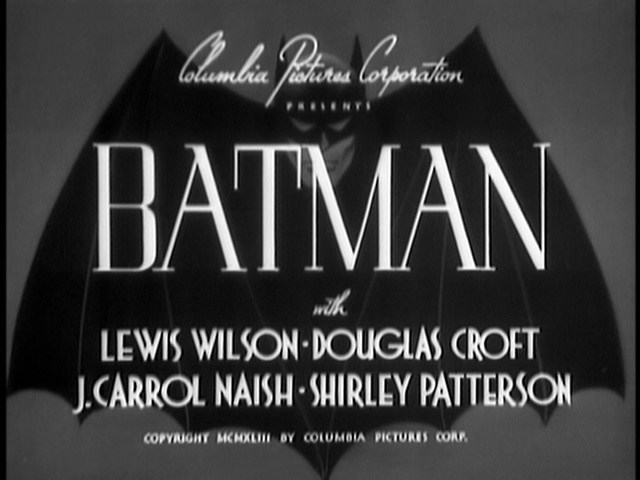 As a little kid, I LOVED watching this movie on our home projector. Dad would set up the screen, thread the film through the projector, shut off the lights, and Batman would come to life in our living room! “Batman’s Last Chance” was subtitled, black-and-white, and deadly serious. I thought it looked like some sort of spooky Batman newsreel — nothing at all like the tongue-in-cheek, brightly colored TV show. Even the movie’s box art looked dramatic. I was always bothered by the fact that it showed Batman’s costume as brown and green instead of gray and blue, though. (Incidentally, that art did not have anything to do with the 1943 serial — it was pulled from poster art from the 1949 serial Batman and Robin.) 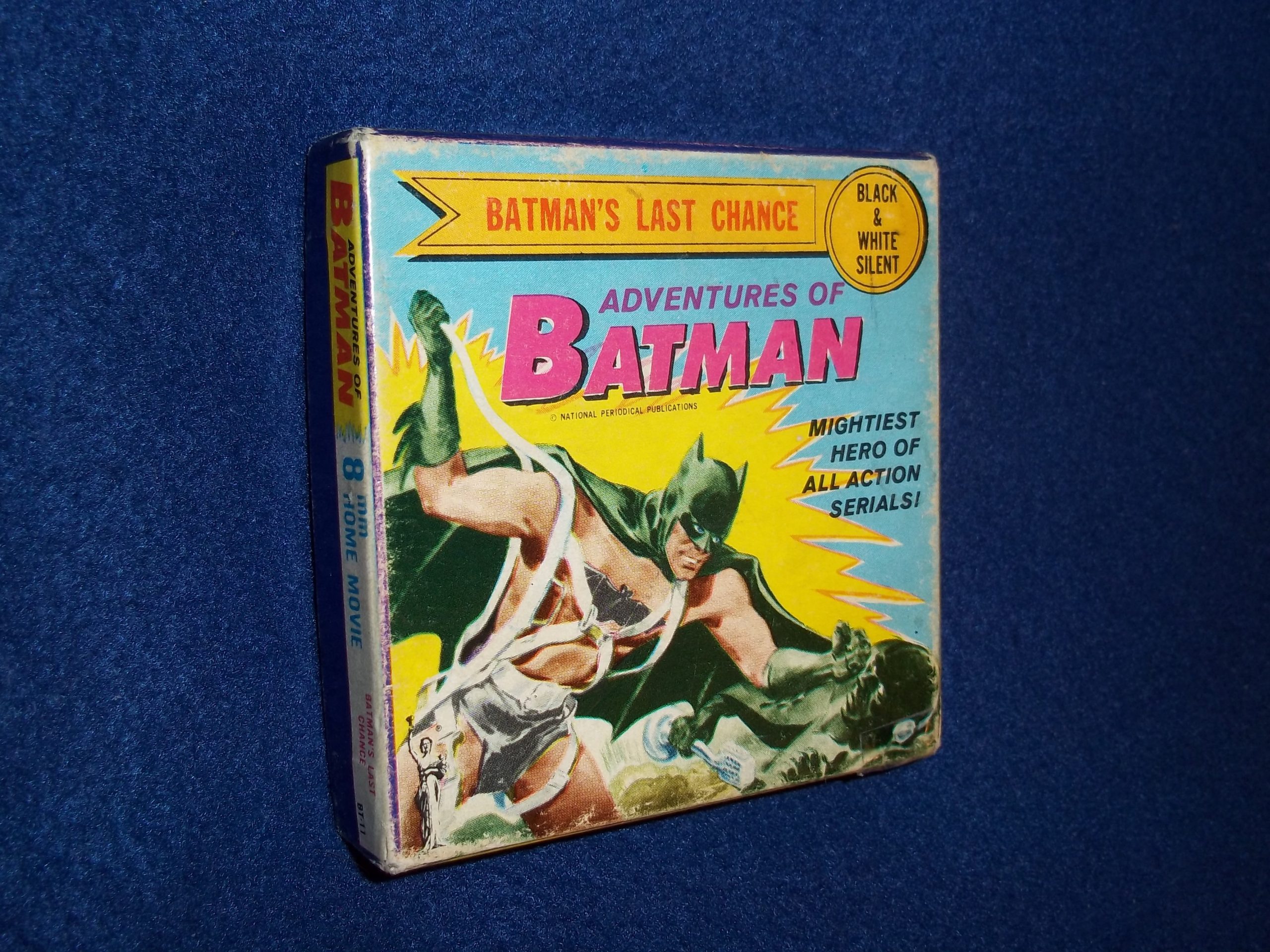 Batman Bop Bag, 1970. When I was a kid, I liked this punching bag because it was so cool to have a Batman that was even taller than I was. But I never much liked the idea of punching Batman — I didn’t want to fight him, I wanted to fight alongside of him like Robin. Still, his large size and grim expression made him very fun to have around the house. (Dan adds: I had this – and loved it too!) 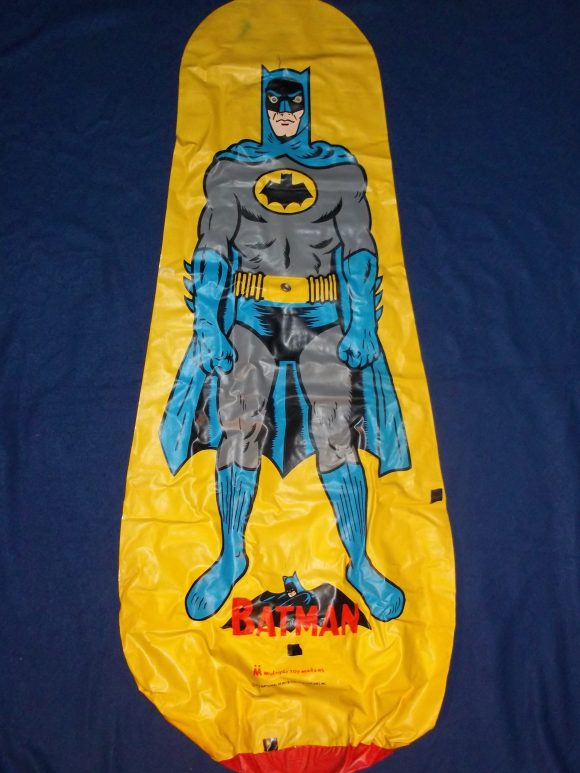 Batman inflatable pool toy, 1972. I must have blown this thing up and taken it in a swimming pool at some point when I was a kid. But to be honest, I only wanted it because it was such a cool Batman logo! I still think that — in fact, to me it looks a lot like the Batman logo found in the opening titles of the 1943 serial. Aurora Batman poster puzzle, 1974. This giant puzzle featured incredible art that was similiar to the box design of the 1970s release of Aurora’s Batman model kit. I had always thought that art was by Neal Adams, though I just read an article written by illustrator Terry Beatty that credits the art to Dick Giordano. Oh well, you can’t go wrong with either of those legends! 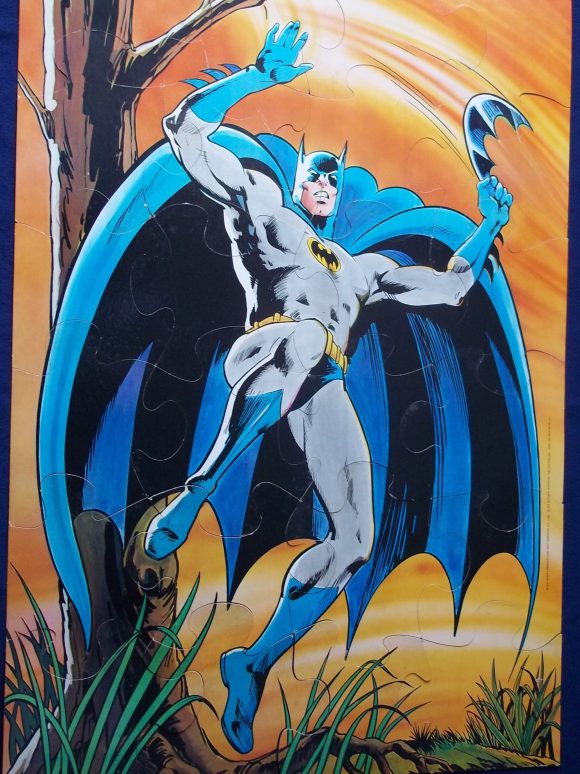 Batmania #22, Feb. 1976. The independently-produced Batmania fanzine is widely considered to be the first publication to examine Batman history from a serious, scholarly perspective. It was created by Billy Joe (Biljo) White, who released his first issue in the early 1960s. White kept Batmania going until 1967, and then it was continued by Rich Morrissey until 1978. At that time, DC refused to let the fanzine continue to be published under that title, so it carried on under the new name Beyond the Clock. I bought Batmania #22 at a comic convention when I was about 12 years old because I was fascinated by its dramatic black-and-white Batman illustrations by Arlen Schumer. I think that Schumer’s great work really foreshadows the hugely popular Batman: Black and White stories that began in the 1990s and continue today. Incidentally, Schumer has gone on to have a successful career as an illustrator and author.

Battery-operated Batcycle, late 1970s. I have no idea where this item was manufactured, but I doubt it was made by any of the mainstream companies that were making Batman toys in the 1970s. I think the item’s box art showing Batman and Robin is every bit as interesting as the item itself. 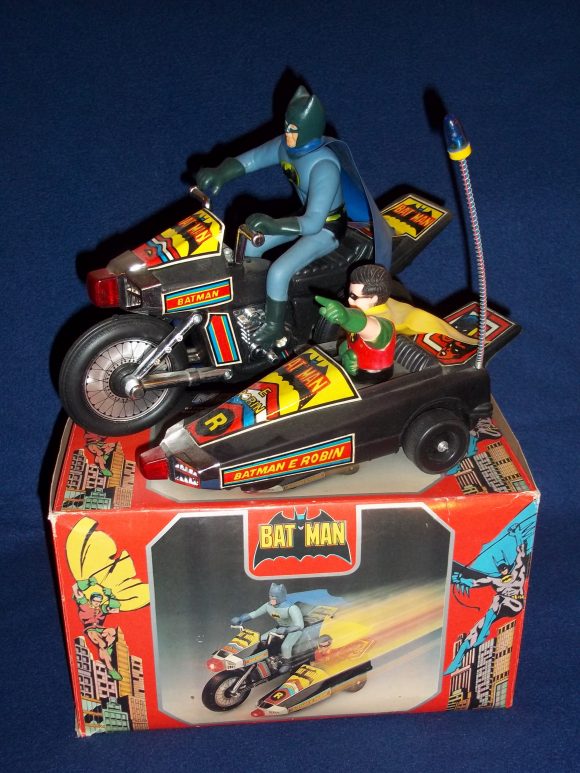 The art is a copy of a panel found on Page 10 of the classic comic book story “The Malay Penguin.” That story was illustrated by Marshall Rogers and Terry Austin, written by Steve Englehart, and first published in Detective Comics #473, dated Nov. 1977. I’ve never seen a Rogers Batman image used on any other non-print Batman merchandise, so I’ve always assumed that this Batcycle was not an officially licensed product.

Batman Annual 1982. Hardcover Batman Annual books have been published in Great Britain since 1960 by a number of different publishers. Beginning in the 1970s, these books started featuring reprints of Batman comic stories. I didn’t know about the British annuals until about 10 or 15 years ago. But once I learned about them, I started collecting them for their story reprints on thick, high-quality paper, and their wonderful cover art. 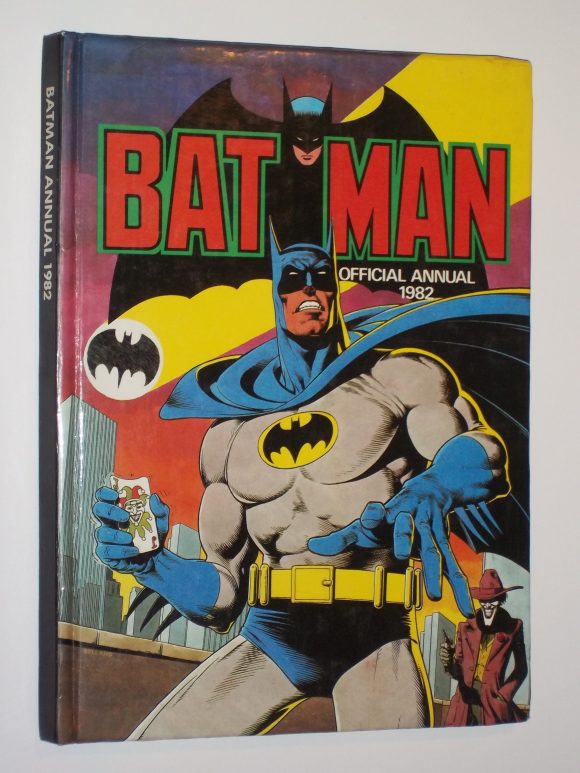 I think that Batman Annual 1982 takes the prize for having the most amazing cover art of all the annuals. It features a Batman/Joker illustration by Brian Bolland that pre-dates his groundbreaking work on Batman: The Killing Joke by about six years. As far as I know, this illustration has not appeared anywhere other than the annual and I think it’s a shame it has not been more widely circulated. In fact, I’d love to see it used as a variant cover for The Killing Joke, because the book’s cover art has always been so Joker-centric.

Well, that’s it for now. I’ll keep on collecting Batman stuff, both new and old. As I’ve said before,  an avid Batman fan is a person who always has something to look forward to, because there is great new Batman stuff being released all the time.

I’ve shown you a lot of things I’ve had since I was a kid, but I wasn’t able to hold onto every last item. My Wilton Batman cake topper I had for my 3rd or 4th birthday didn’t stay with me, and I’ve always got my eye out for a replacement!

Mark S. Reinhart is the author of The Batman Filmography.