TOYHEM! More shopping in the past …

UPDATED 12/5/19: Welcome to TOYHEM! For the holiday season, we’re bringing you a series of features and columns celebrating the toys of our youth, which often made for the best memories this time of year. Click here to check out the complete index of stories. Most of TOYHEM! is brand-new material but there are a few pieces worth re-presenting and this is one of them — because we’ve got a sequel coming! So dig this dandy column from 2018. It holds up as well now as it did then. Dig it. — Dan

A few weeks ago, I posted a story listing 13 classic toys we’d love to see re-released. I say “we” because it was inspired by an online conversation I was having with reader Tyrone Biljan. (Click here to check out the list because if you’re reading this, you’ll dig it.)

Anyway, Tyrone decided to get on the act himself — only he chose to focus his efforts strictly on Batman, who of course has had a Bat-ton of merch over the decades. He also decided to rank his choices, 13-1. Cool by me. (He’s Canadian, by the way, so I’ve left in his spellings. I’m polite like that.)

Naturally, a lot of this stuff is available on the secondary market, and not necessarily all that expensive. But there’s nothing quite like being able to get something fresh and new, hence our desire to see some enterprising company pick up the baton on these.

So, here’s Tyrone and his list of 13 BATMAN TOYS WE WANT TO SEE RE-RELEASED:

Dan’s list had some of my recommendations when we were messaging back and forth. (Click here.) But I wanted to be a little narrower in scope, specific only to some of my favourite Batman collectibles that I think others would enjoy seeing on store shelves or pegs or via an online retailer. This list was also inspired by my recent visit to the amazing Batman TV show exhibit at the Hollywood Museum in Los Angeles. (Click here for MUCH more on that.)

13. Topps Batman photo cards. Abrams ComicArts has published hardcover books highlighting Topps’ Star Trek (click here), Star Wars (click here) and Planet of the Apes (click here) bubble-gum cards. It would great to see the Batman photo series cards represented too — or as a reprint card set! The artwork cards that came out around the same time are fantastic, but they have been rereleased in various formats over the years. Bring back the Bat Laffs cards! 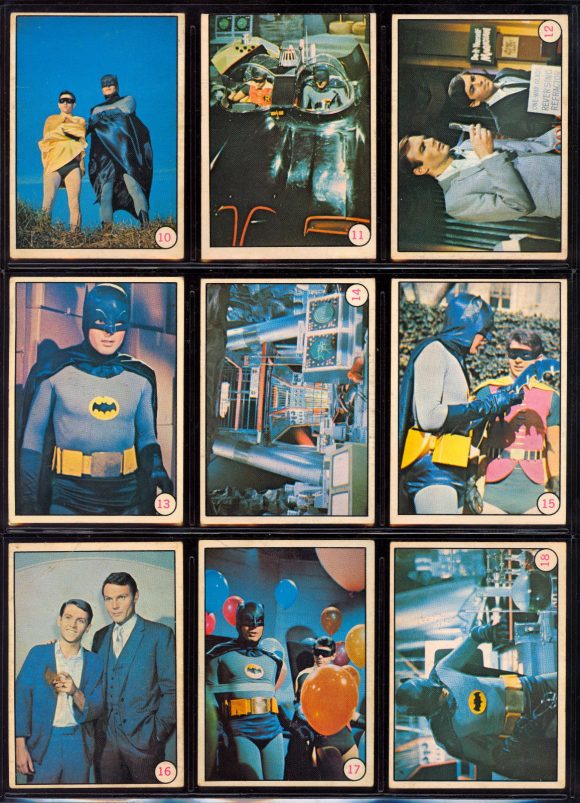 12. Batman parachute figure. This I first saw in a discount store called Zellers in Grimsby, Ontario. It was on an aisle peg-rack display in the early ’70s. For me it is one of the perfect collectibles, with its great mid-’60s logo at the top and printed on the parachute. (There were variations, with red and, I think, green plastic parachutes. Mine was the yellow one.) Also I thought it cool that the figure had the Bat logo without the circle around it. 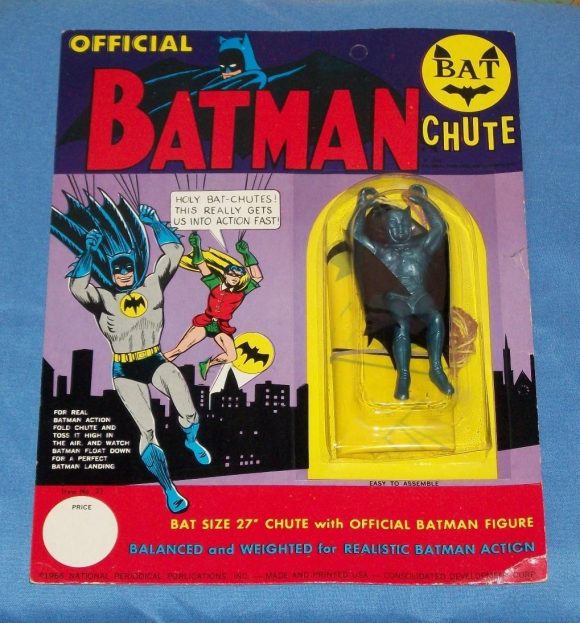 11. 1966 Batman three-ring binder. I remember seeing kids with this at school and I thought it was so cool. The scallops on the bottom — and the design entire design of it. There was kind of a variation of it in the early ’90s based on the Bruce Timm animated series. 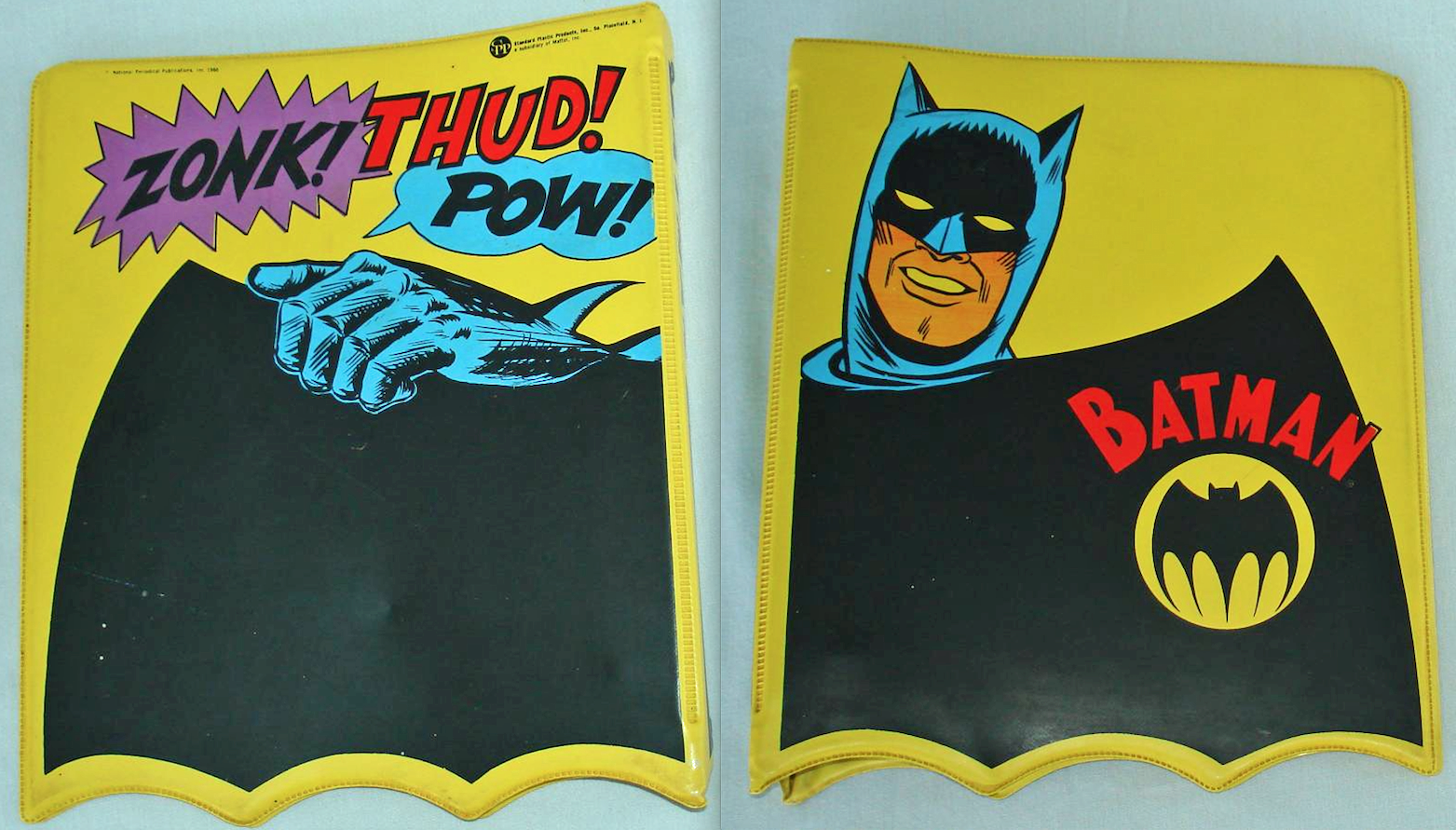 10. Aurora Penguin model kit. Hands down, one of the best Bat-model kits next to the Batmobile. I got mine at a hobby/hardware store in Stoney Creek, Ontario. You could see it sitting there on the shelf for years — and I mean years — next to the Aurora Wonder Woman kit of the ’60s. I never painted mine. I liked the look of it just the way it was. (Though I think I used some of the decals.)

9. Ben Cooper costume/mask. Ben Cooper is sort of going through a resurrection these days, and acknowledging its licensing past too. I hope they find a way to rerelease this not as a kids’ costume but maybe as a Figures Toy Company figure or an adult onesie! 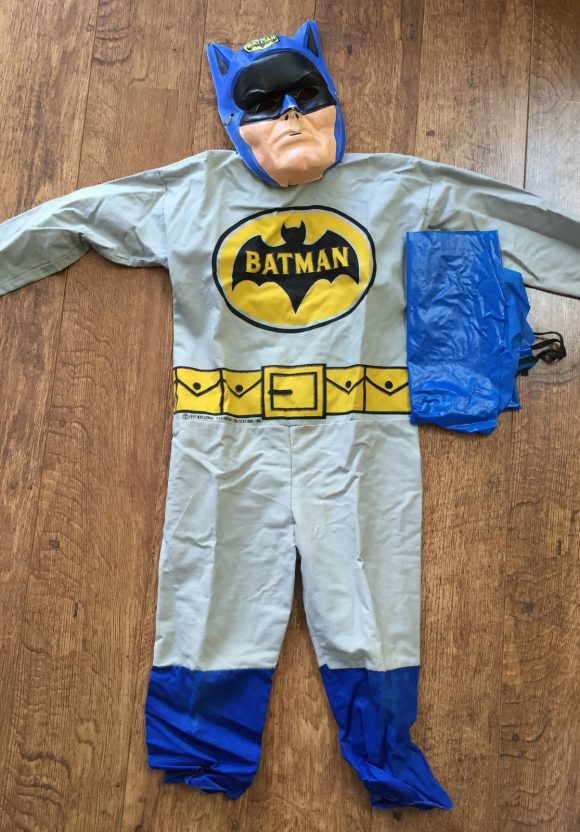 8. Ben Cooper rubber Batman figure on a string. Yeah, it’s cheap looking and odd but I just love it for what it is. Again, a favourite as a kid but lost to time. I found it again at a comic convention in the mid-’90s. 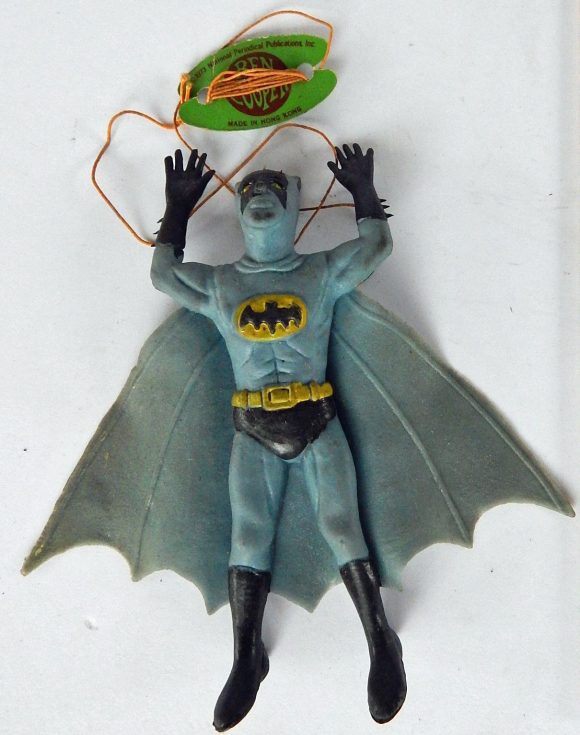 7. APC jigsaw puzzles in a can. There were various releases of these around 1973. My fave was the one with the Carmine Infantino/Murphy Anderson art of Batman and Robin on a rooftop. (There were others too, both in cans and boxes, such as Neal Adams’ Batman punching out the Joker.) 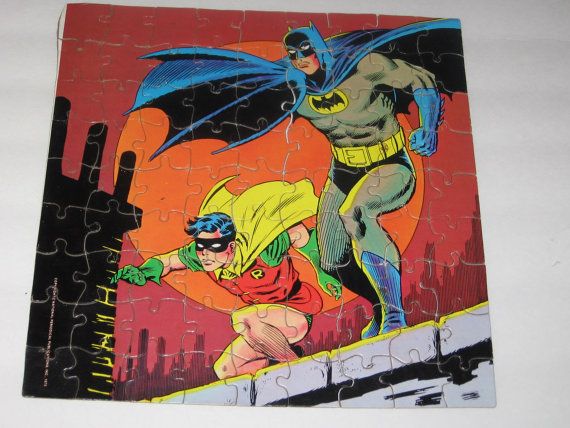 6. Ideal cape and cowl. The cowl is a great display piece. You can get them reasonably on auction sites if you look. Box design is great too. 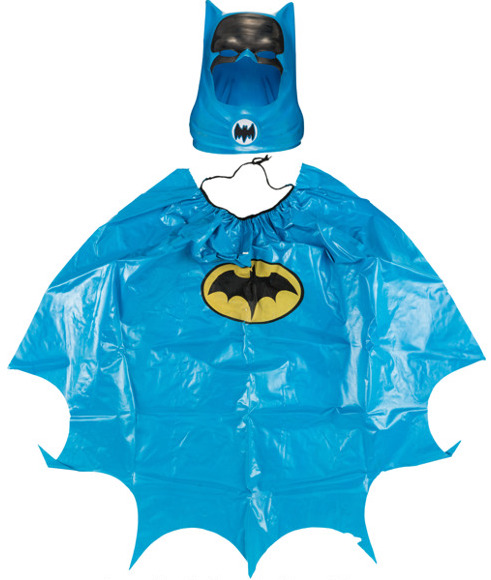 5. Batman Pez with cape. The 1966 Batman Pez head pretty much was unchanged for multiple releases all over the world up until the mid ’90s. But the Holy Grail is the figure with the cape. I’m actually surprised this hasn’t popped up as a bobble-head or large bank.

4. Corgi 1966 Batboat. The one with the black metal tail fin and mini Batman and Robin figures. I think I went through several them as a kid. It went in the backyard pool and floated no problem. The original Corgi release was the best with the trailer. 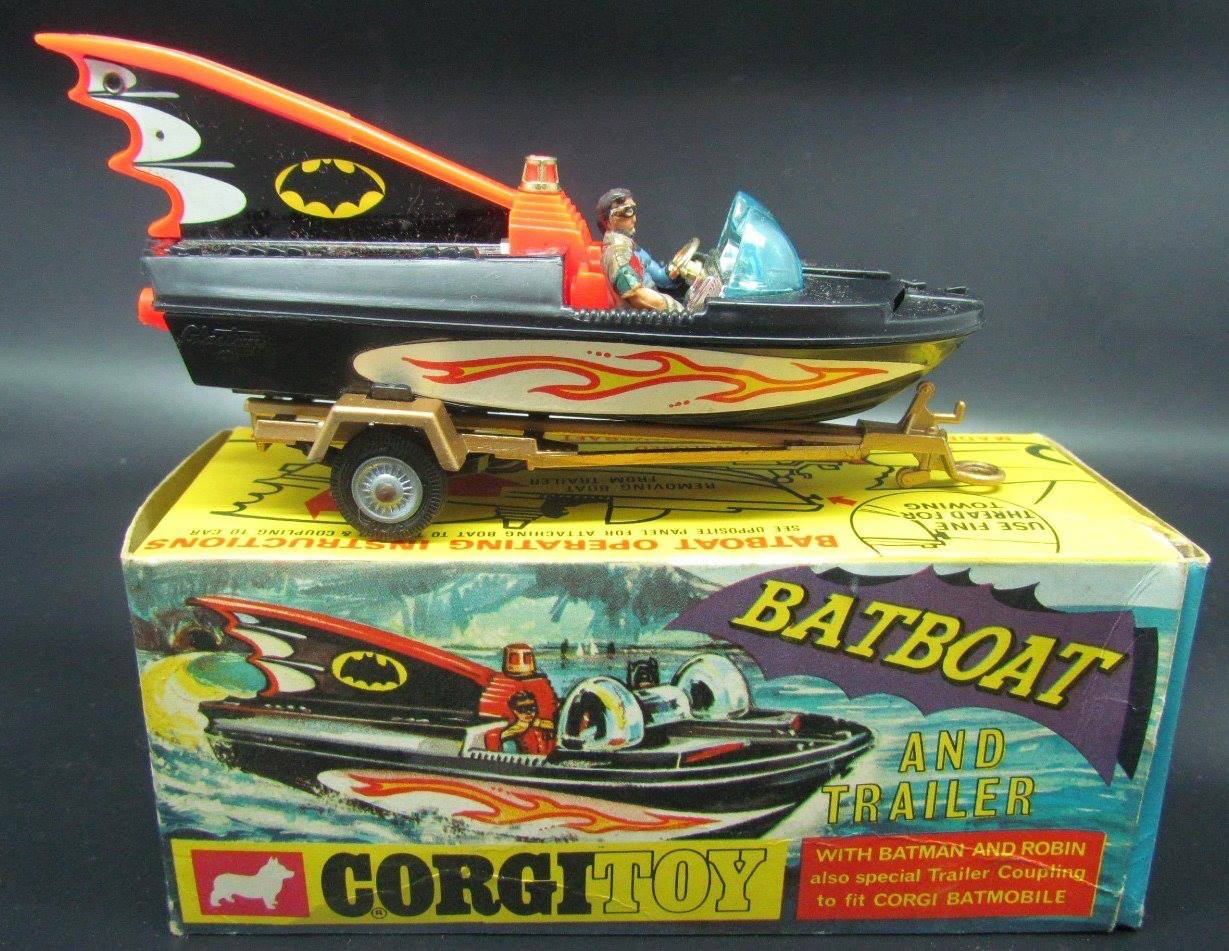 3. Colorforms Batman kit. Dan covered this one, as well. Colorforms has been saluting its past, with re-releases including Snoopy Come Home and the original generic set. Can the classic Batman kit be far behind? 2. 1973 Carmine Infantino Batman poster. I had this poster for years in my room as a kid and it was lost to time. The Infantino/Anderson artwork is classic against a purple background with the Batsignal in the sky. 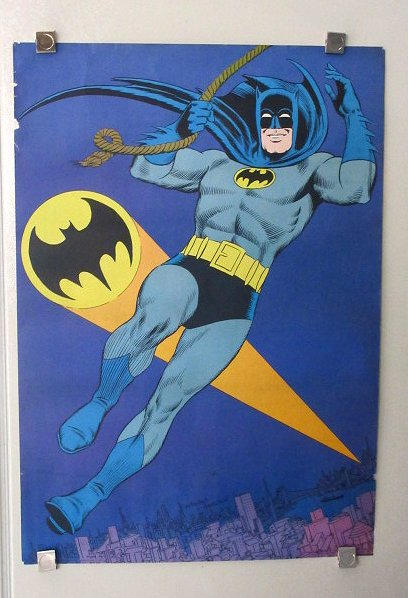 1. Corgi 1966 Batmobile. The original release, with the cool box graphics. The Bat-wheels with the “fire” moving in and out of the back by the trailer hitch. The firing rockets, the chain cutter. Infantino Batman figure on the bottom. A classic for every Bat-fan! (Click here for DC Comics writer/artist Dan Jurgens’ take on this great toy.)