The only thing better than comics is reading about them…

Peter Bosch is one of our more recent contributors and I came to know him through his superb American TV Comic Books: 1940s-1980s – From the Small Screen to the Printed Page, published by TwoMorrows. (Click here to buy it! It’s worth every penny.)

Given his talent for research, he’s an ideal choice to write this column — 13 FABULOUS BOOKS ON COMICS HISTORY.

What did I do when I wasn’t reading comic books in my youth? I was reading about them!

When I was young (oh, so many years… sigh, decades… ago), I wanted to learn about comic book heroes of the past, those before my time. Well, as the saying goes, when the student is ready, the teacher will appear and, at that time in my childhood (the early 1960s), books about the history of comics started appearing.

To this day, the teacher still finds me an eager student.

Here are 13 of my favorite comics-history books, starting with the very best: 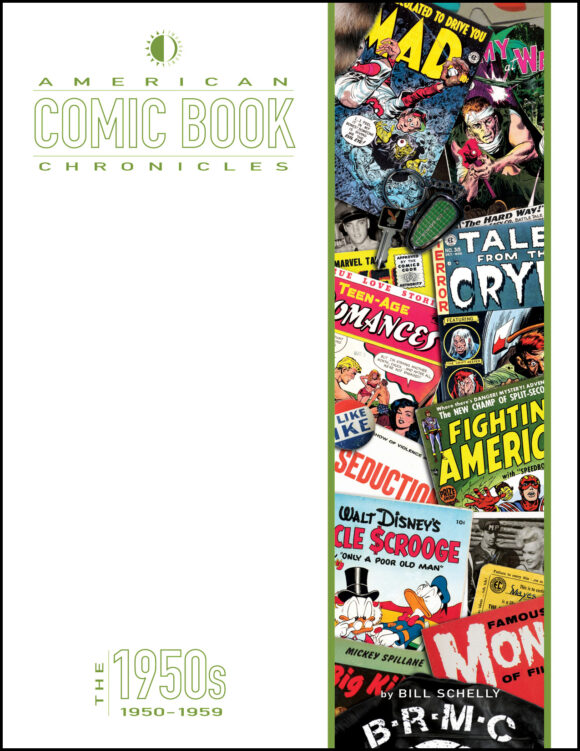 The following of my favorites are listed by their publication date, not by rank.

2. The Great Comic Book Heroes (Dial Press, 1965). In the early 1960s, the subject of the Golden Age of Comics was generally limited to fanzines. It was humorist Jules Feiffer who brought that nostalgia to the rest of America with his lengthy article, “The Great Comic Book Heroes,” first in the October 1965 issue of Playboy and then a few months later in a large hardcover book from Dial Press. Feiffer wrote about his magical time as a youth reading comics in the 1930s and 1940s, and his famous wit was quite evident, such as in this description of Will Eisner’s The Spirit: “Much of the Spirit’s charm lay in his response to intense physical punishment. Hoodlums could slug him, shoot him, bend pipes over his head. The Spirit merely stuck his tongue in his cheek and beat the crap out of them.” (It should be noted that Feiffer got to work as Eisner’s assistant from 1946 to 1956.) When Dial Press published Feiffer’s book, they also included over 100 pages of full-color reprints featuring the Spirit, Superman, Batman, Captain America and other major heroes of the Golden Age.) 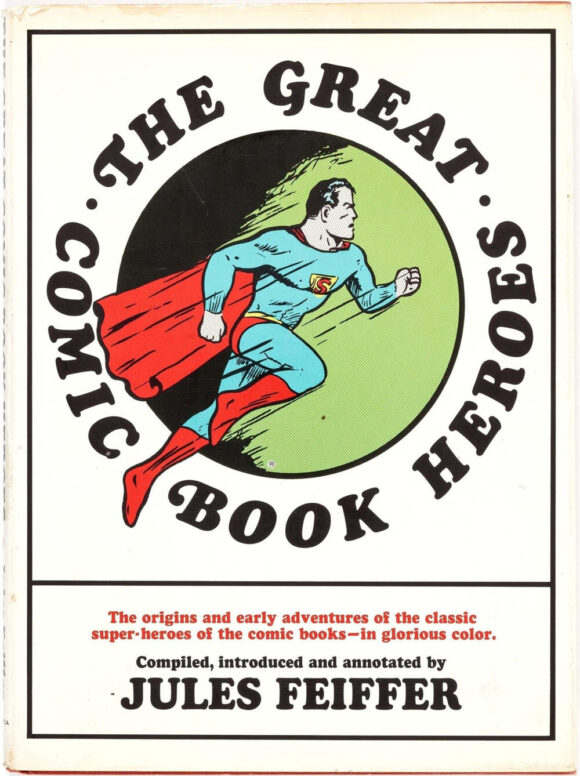 3. The Illustrated Comic Collector’s Handbook (SFCA, 1966-1970). G.B. Love (Rocket’s Blast Comicollector) published four fanzine issues of The Illustrated Comic Collector’s Handbook about Golden Age superheroes (the 4th issue was renamed “The Collector’s Handbook”). Researched and written by Raymond Miller (with Miller doing most of the black-and-white illustrations), these averaged between 20 to 40 pages per issue, usually with two heroes per page and a short bio of each. These fanzines were simply done, and no match for the books below, but they offered exposure to Golden Age heroes I knew very little about in the 1960s. 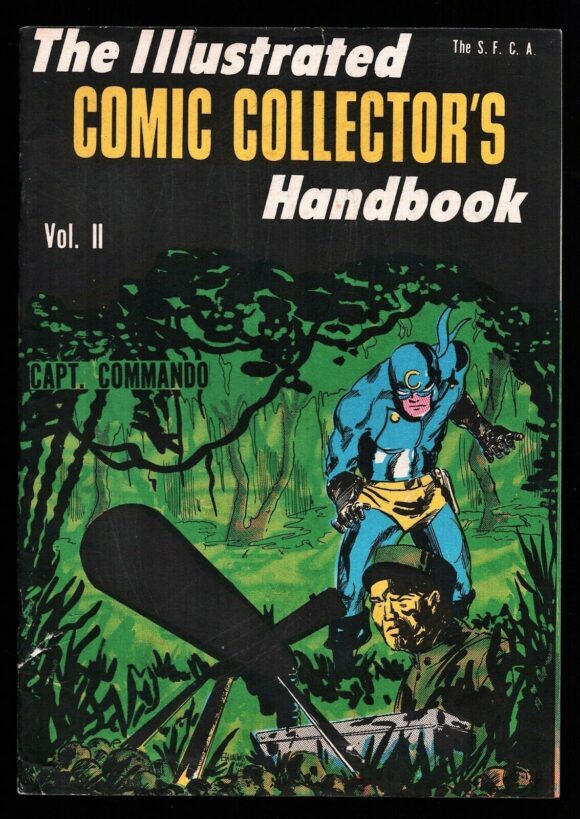 4. All in Color for a Dime (Arlington House, 1970). Collecting articles from the early 1960s fanzine “Xero,” as well as including newly written pieces for this book, All in Color for a Dime was about the Golden Age of comic books. In-depth analyses of various comic heroes, including Superman, Captain Marvel and Captain America, were written by Dick Lupoff, Don Thompson, Roy Thomas, Jim Harmon, Ron Goulart, Harlan Ellison and others. Several black-and-white illustrations accompanied the articles and there was a bonus 15-page section of color covers. 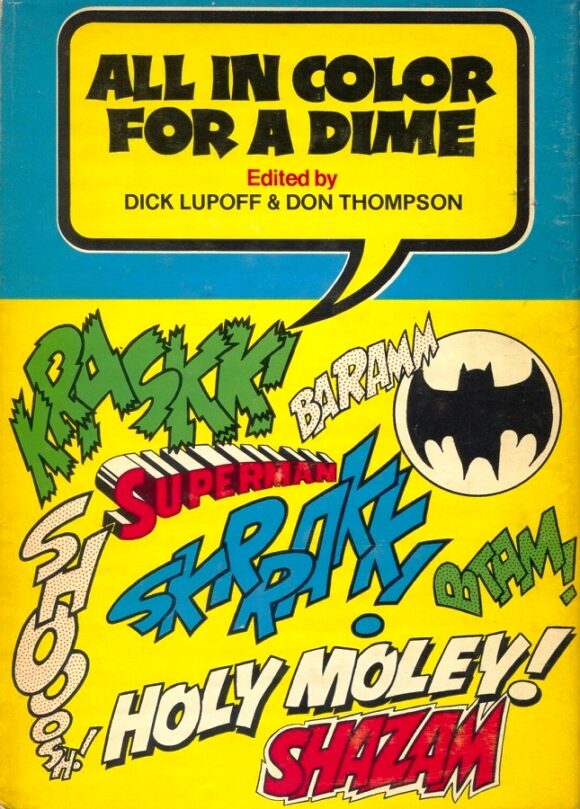 5. The Steranko History of Comics (Supergraphics, 1970-1972). What was originally intended to be a six-volume history by Jim Steranko, ended after just two, but these two were magnificent! Each volume measures 10.5 x 14 inches with stunning wraparound covers by Steranko featuring dozens of superheroes. The inside chapters detail the Golden Age days of Superman, Batman, Captain America, Captain Marvel, Blackhawk, Plastic Man and the Spirit, as well as secondary heroes from DC, Marvel, Fawcett and Quality. Each volume also has hundreds of black-and-white photos of rare comic book covers. The Steranko History of Comics was one of the first histories of comics and is still one of the finest. 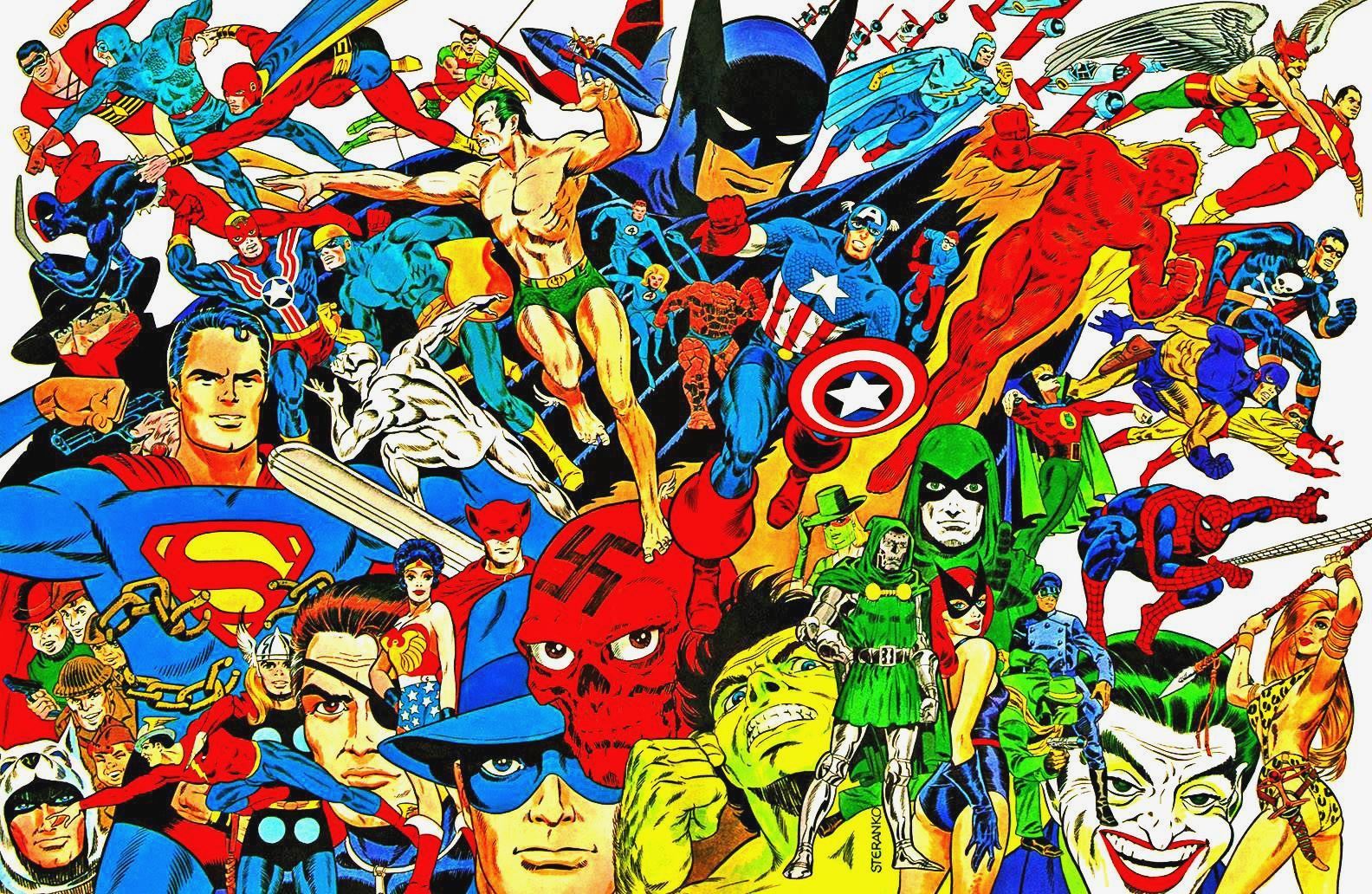 7. The Photo-Journal Guide to Comic Books (Gerber Publications, 1989-1991). While there is very little text that discusses the history of comics in Ernst Gerber’s spectacular four-volume series, it was certainly the most ambitious project at the time to show comic book covers — more than 29,000 in full color. His first two volumes (with Mary Gerber) contained a total of approximately 21,000 covers from all companies between 1935-1965. The third and fourth volumes were called The Photo-Journal Guide to Marvel Comics and had almost 8,000 covers from the company’s Silver and Bronze Ages. (There was also a deluxe edition that combined the two Marvel entries and added 16 more pages of pre-superhero covers.) 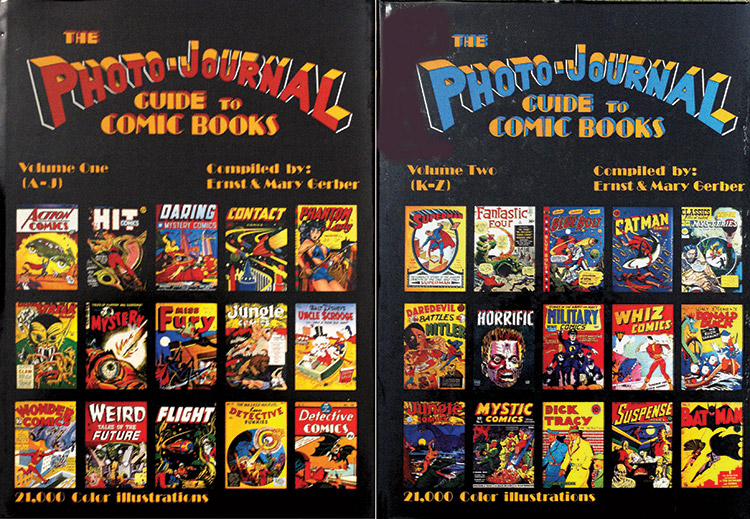 8. The Taylor History of Comics (Taylor Publishing Company, 1991-1993). A superb comic history, this five-volume set written by Mike Benton was a follow-up to his exceptional book, The Comic Book in America (Taylor, 1989). The separate volumes of this series were (in order): “Horror Comics,” “Superhero Comics of the Silver Age,” “Science Fiction Comics,” “Superhero Comics of the Golden Age,” and “Crime Comics.” Each volume was well-written and included hundreds of full-color covers and illustrations. 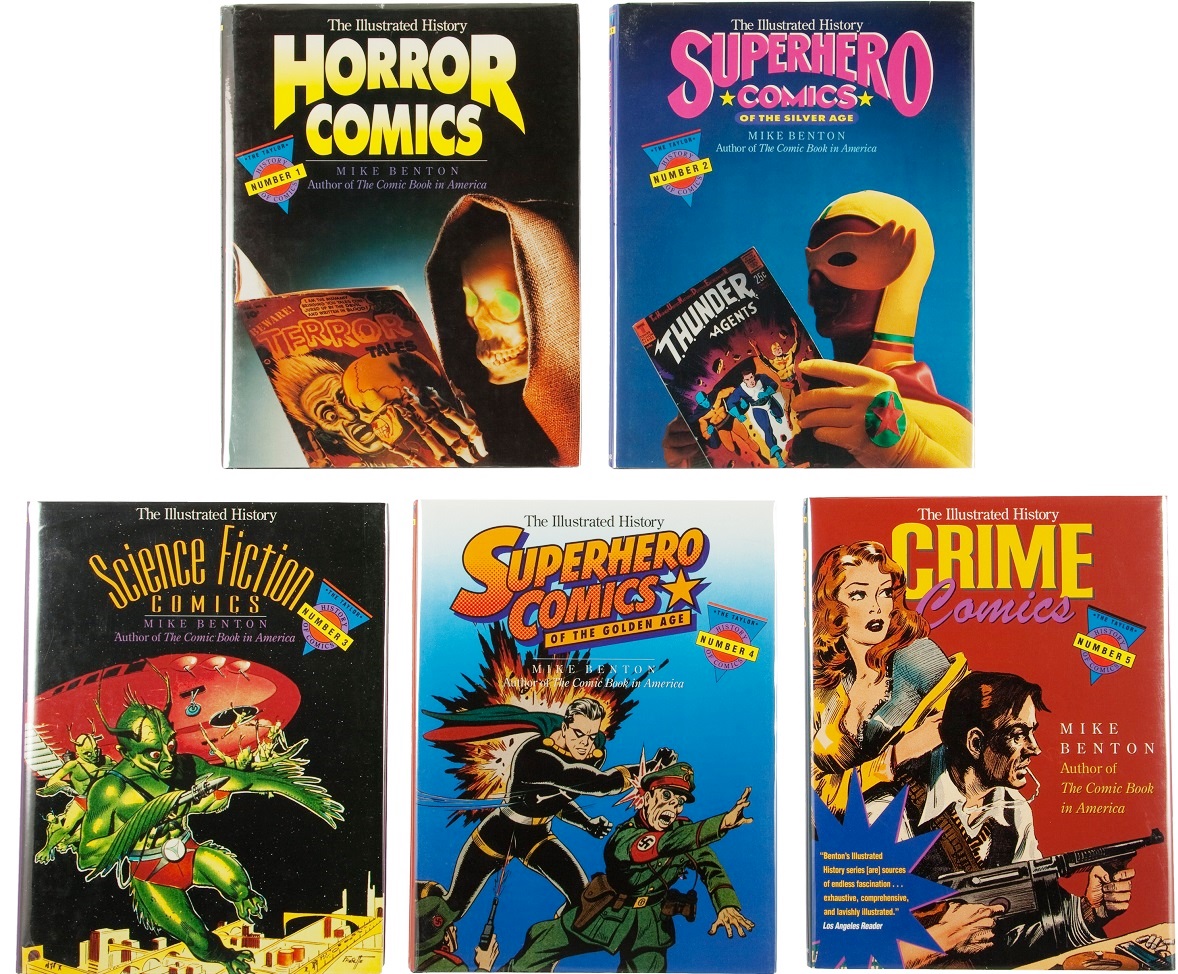 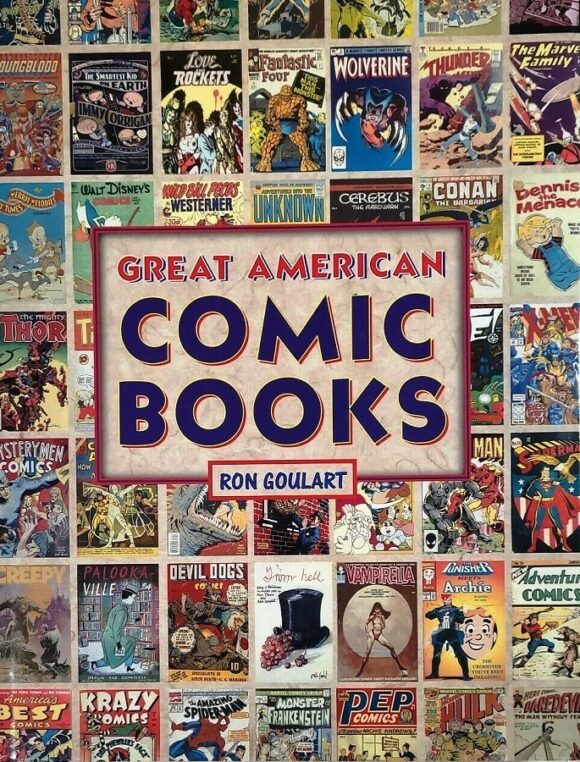 10. 75 Years of DC Comics: The Art of Modern Mythmaking (Taschen, 2010). Weighing in at 15 pounds and measuring 12 inches wide, 16 inches high, and 3 inches thick, 75 Years of DC Comics is a monster of a book that requires a forklift to get it on a coffee table. At 720 pages, including five timeline foldouts, this is the ultimate book for fans of DC Comics, covering 1935 to 2010. In addition to chapter essays written by Paul Levitz, there are more than 2,000 images of comic covers, interior pages, original art, and miscellaneous photos. The immense book provides excellent coverage of the different eras: the Golden Age chapter gets a whopping 239 pages, the Silver Age receives 196, the Bronze Age has 112, the Dark Age at 58, and the Modern Age with 70 pages. (Taschen used this material later to create smaller individual books on the Golden, Silver, and Bronze Ages of DC Comics, but the “75 Years” book contained it all.) 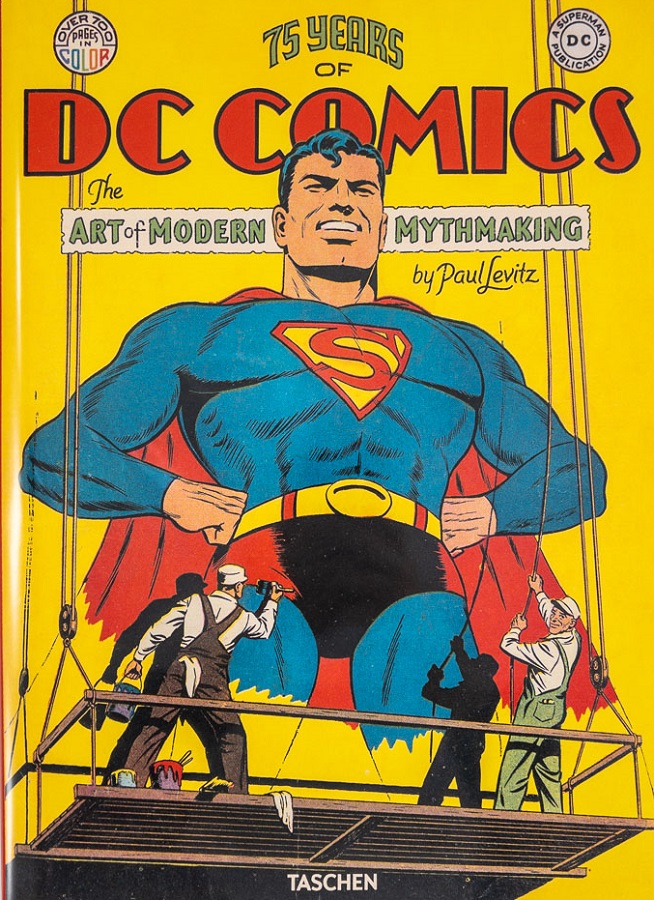 11. The Quality Companion (TwoMorrows Publishing, 2011). Quality Comics lived up to its name, with Reed Crandall, Lou Fine, Will Eisner, Jack Cole and others providing the finest art to appear in comics of the 1940s. TwoMorrows’ 224-page The Quality Companion by Mike Kooiman and Jim Amash, starts right in with 62 pages of full-color story reprints of major heroes under the Quality banner, including the Ray, Phantom Lady, Black Condor and Uncle Sam. Following that, the book explores the history of the company (including the later transition of some characters to DC Comics). There are also bios of Quality’s major artists and writers, and the largest chapter details the heroes’ origins and a listing of every comic in which they appeared. 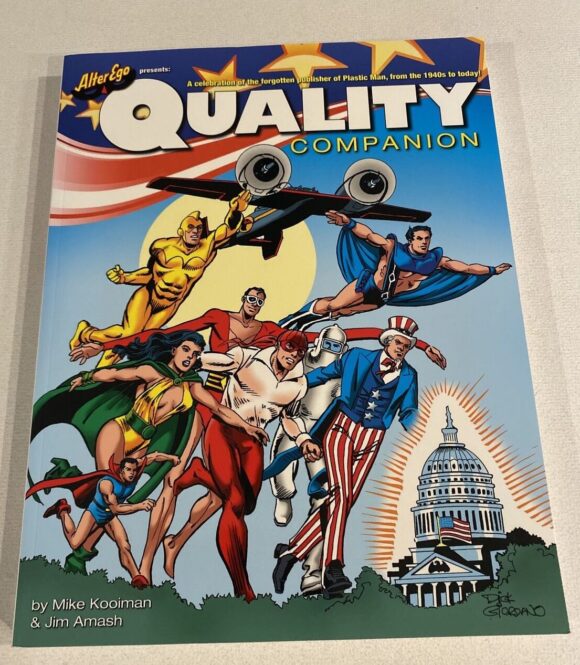 12. 75 Years of Marvel: From the Golden Age to the Silver Screen (Taschen, 2014). Four years after their DC book, Taschen did the same for Marvel’s 75th anniversary in 2014. The huge dimensions of the book matched that of the DC volume, as well as containing a similar 2,000 images, but it had a slightly less amount of pages, 712, because a 10-page timeline foldout was a separate item this time, and chapter essays were written by Roy Thomas. The history covers from 1939 to 2014 (as well as when Marvel publisher Martin Goodman started publishing pulp magazines in 1933). The Timely era receives 110 pages, followed by almost 100 pages devoted to Atlas Comics, and, of course, the Marvel Age of Comics gets the largest segment with 264 pages. That is followed by 80 pages of “The Dawn of the Bronze Age”… which still left 150 pages to extoll the virtues of the 40 years after that. 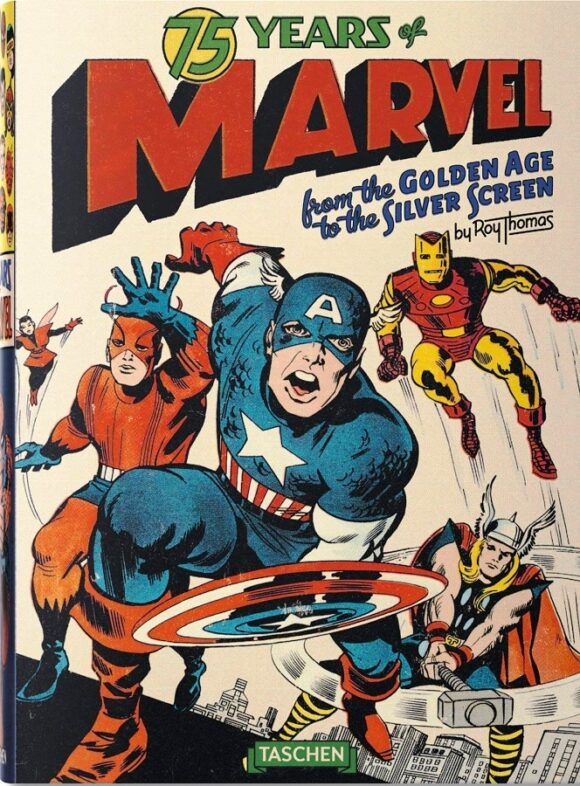 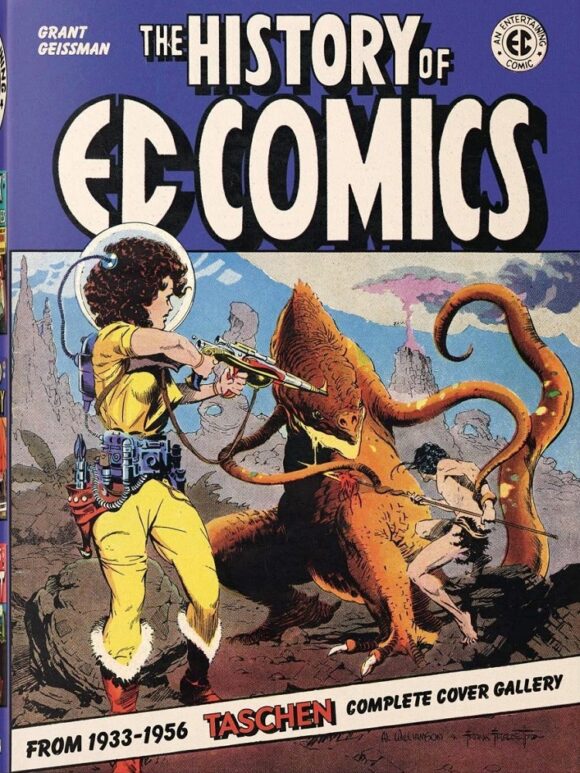