Dig the Magnificent Cover for DC’s WHO’s WHO OMNIBUS Vol. 1 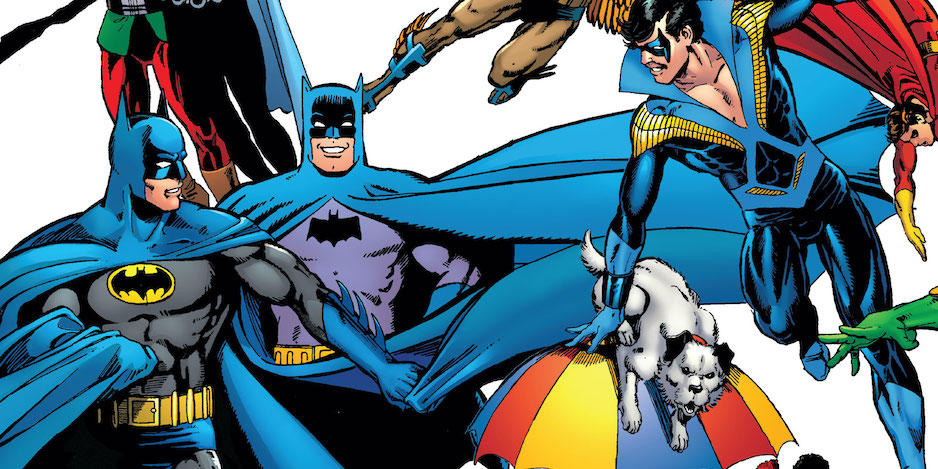 Easily one of the year’s most anticipated trade collections is Who’s Who Omnibus Vol. 1, coming from DC in April.

There is a LOT to unpack here:

— George Perez’s original Who’s Who covers from the first ’80s series are legendary but he didn’t produce all 26. It looks like DC curated Perez’s images from various covers to make this new tableau. Nice.

— To make it easier to see, here’s the front cover: 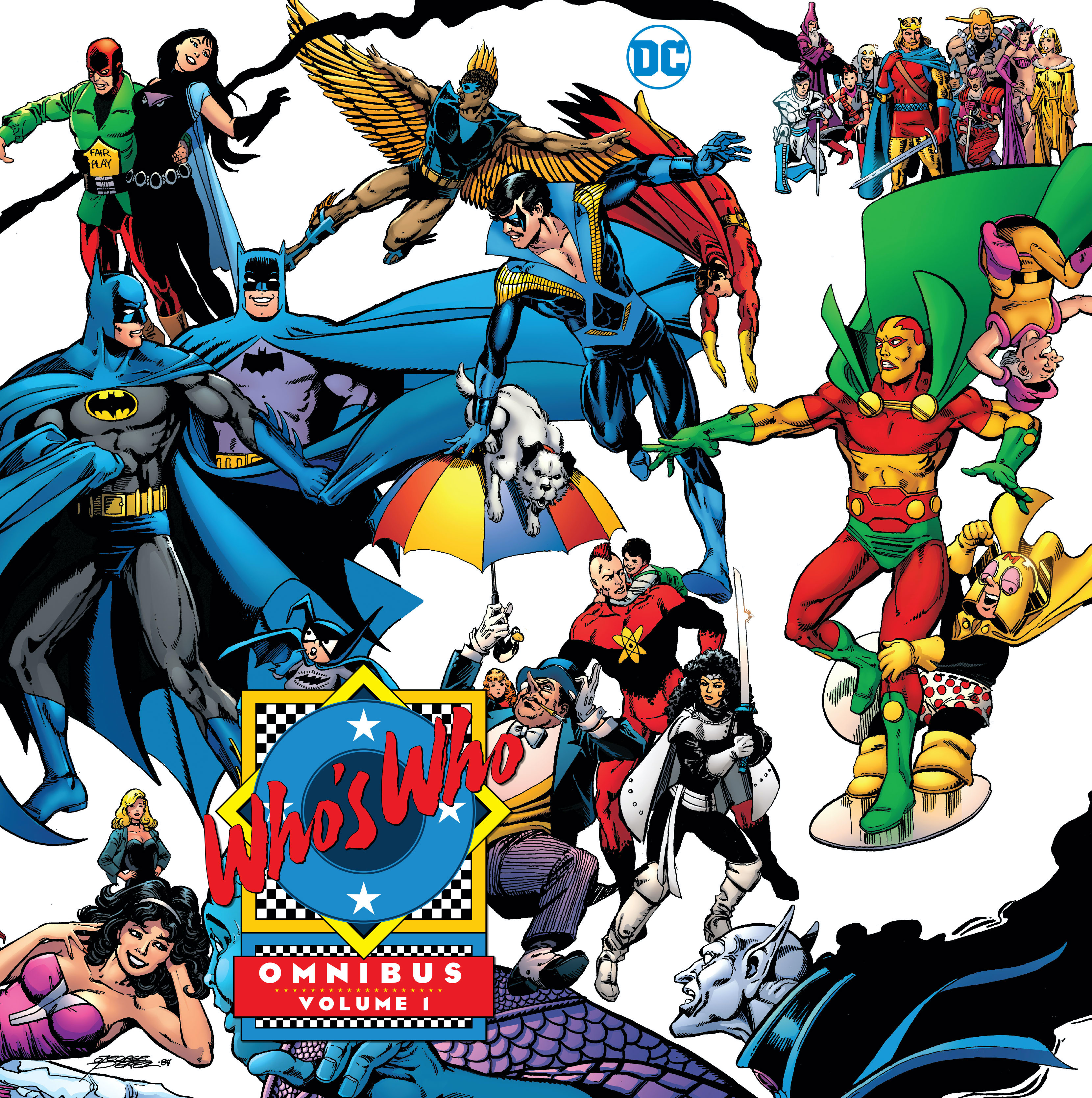 The right section looks like it will be the inside flap.

— And here’s the back cover: 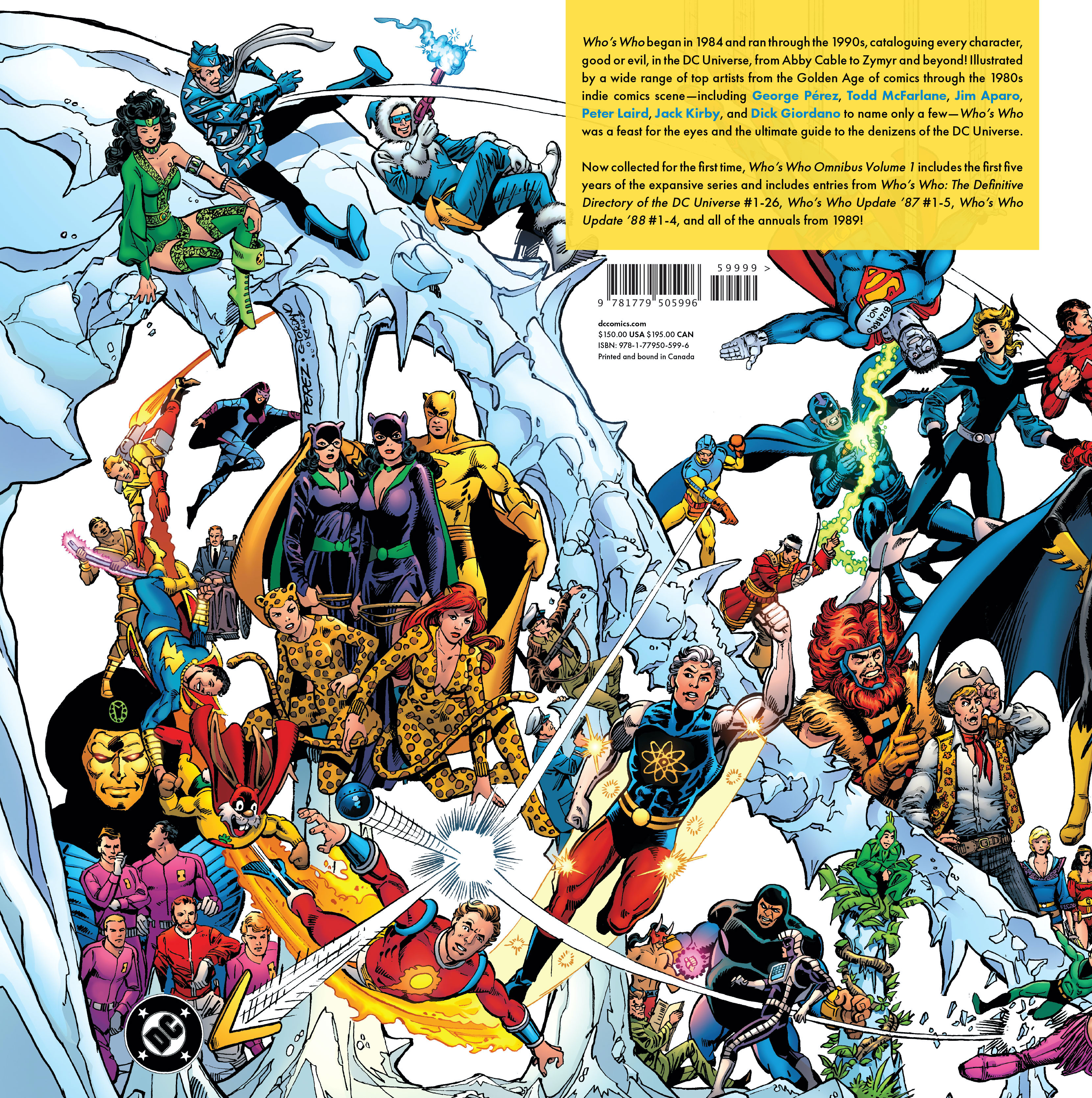 The left section looks like it will be the inside flap

— Batman dominates the center of the front cover and gets the spine logo to himself. Notice who’s missing? Superman and Wonder Woman. I imagine they will be central to a second volume’s cover. 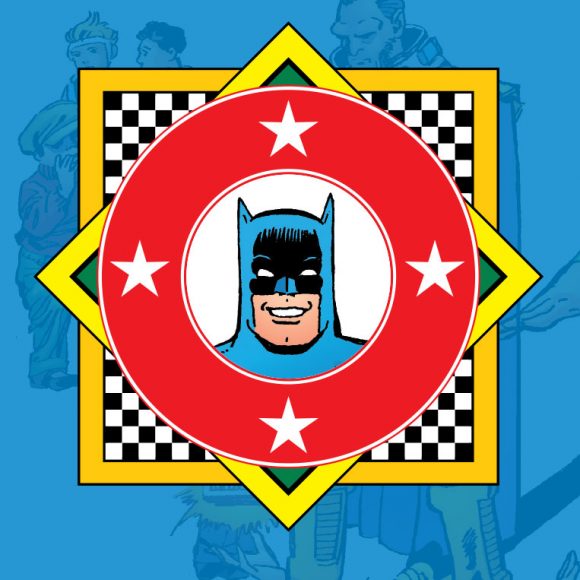 Too bad Batgirl and Batwoman are obscured under the translucent blue spine. (See full cover above.)

— Speaking of, if you notice the yellow box on the back cover, you’ll see the edition’s finalized contents — ending in 1989. Who’s Who continued into the ’90s in various incarnations, so I expect those series will make up the anticipated sequel.

— The 1,320-page doorstop is due April 13 and lists for $150. I have all of the original series and most of the first sequels but there is no question I’ll be picking this up. The interior art and readability should be major selling points. A lot of the original pages don’t age well because their backgrounds tended to be light, monochromatic colors that have become washed out. The versions on DC Universe Infinite, however, are bold and vibrant, like so: 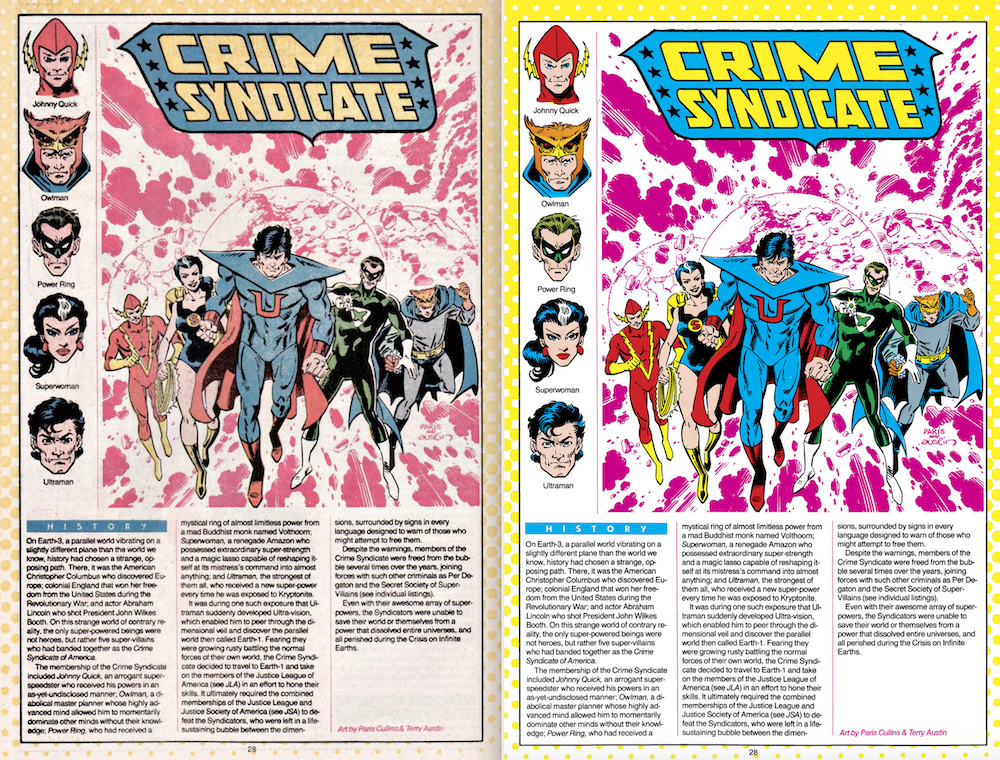 — My hope is the book will look a lot more like the right than the left. I’ll be stunned if that’s not the case.

— Nice to see the classic DC Bullet making a cameo appearance in the lower, left-hand corner. Check out other little bits and pieces too: 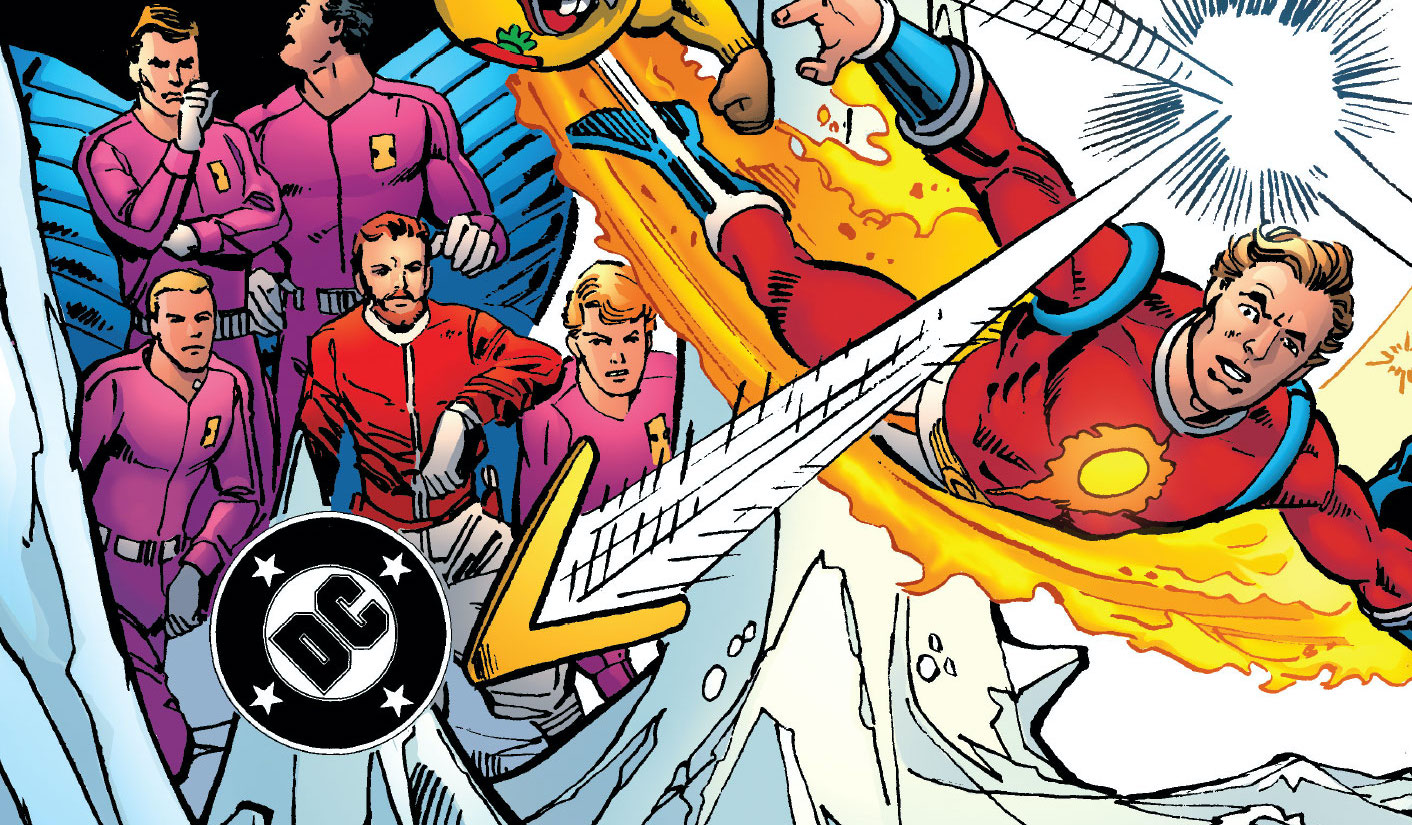 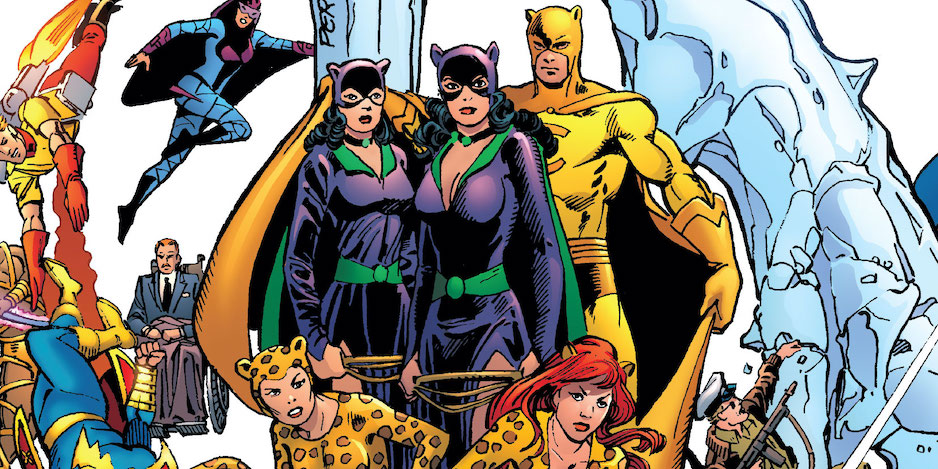 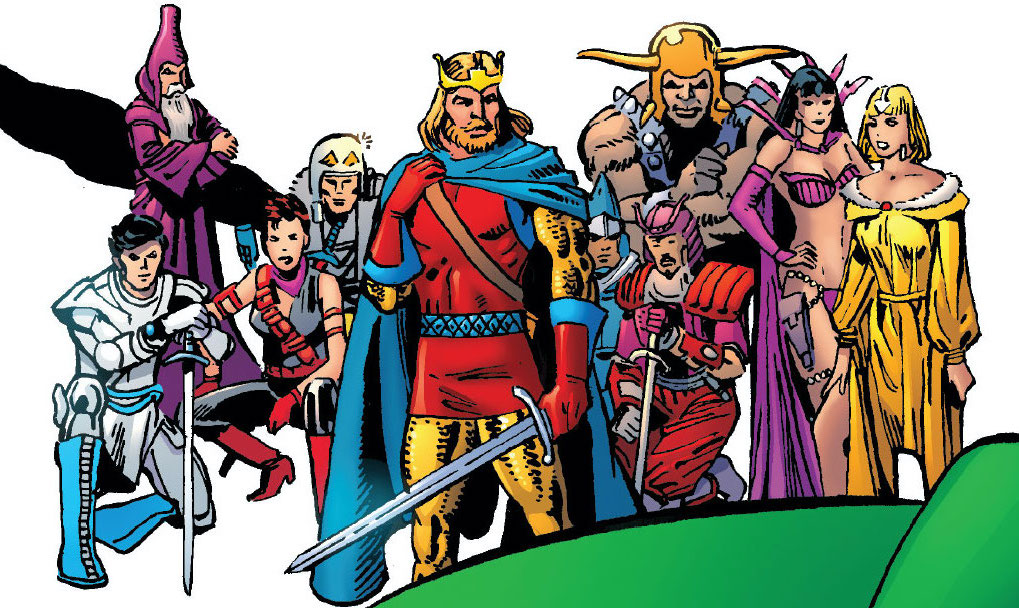