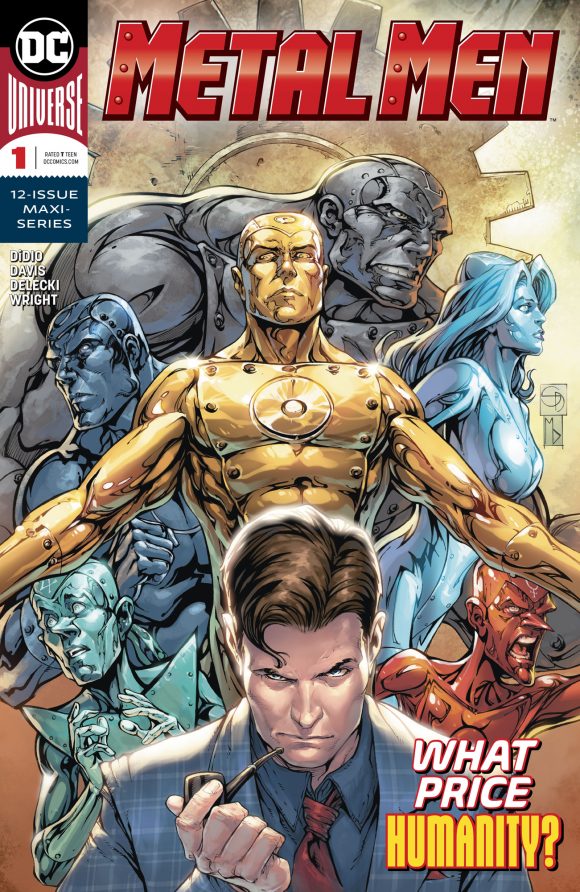 The Metal Men are one of those cult-fave DC teams that pops up from time to time, usually eliciting amused smiles and pangs of nostalgia.

The concept is very much of its time – and ahead of it: Created by writer Robert Kanigher and artist Ross Andru in 1962 – the thick of the high-concept Silver Age – Metal Men features a crew of sentient robots each imbued with the powers and characteristics of a particular metallurgic element: bold leader Gold, acerbic Mercury, lovely Platinum, and so on — all guided by their human creator Doc Magnus.

On the face of it, they’re a bunch of old-timey characters with wacky powers and personalities. But on a deeper, more modern level, the Metal Men explore the nature of AI – for good and bad.

With all this in mind, DC Comics’ co-publisher Dan DiDio (whose 60th birthday happens to be Sunday) and artist Shane Davis on Wednesday (Oct. 16) are launching a 12-issue maxiseries starring the team of sentient androids – now faced with a being made from powerful Nth Metal and confronted by a disturbing truth about their pasts. 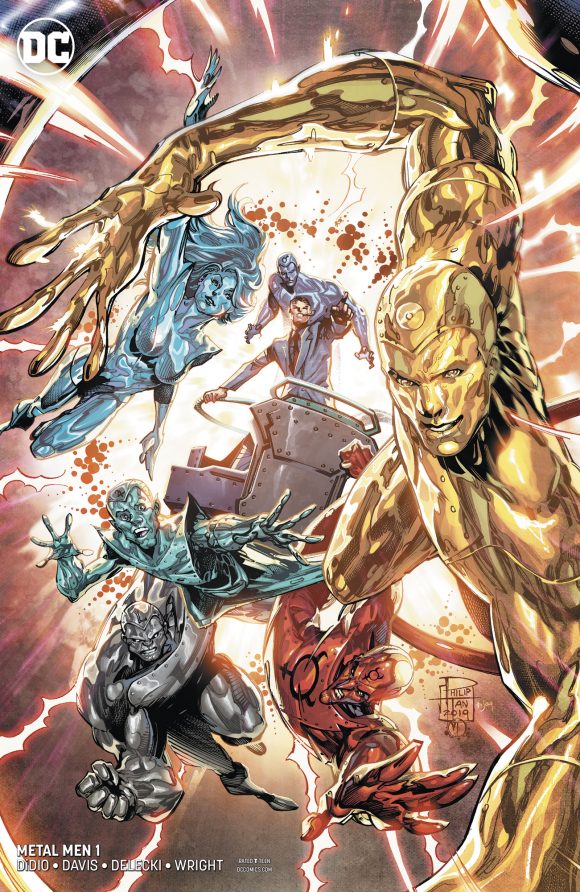 I asked DiDio in an interview why now was the right time to bring the Metal Men back:

“I was watching the Westworld series on HBO and I loved what they were doing and what they were exploring, the humanity of the animatronics, so to speak,” he said. “And I figured there was a lot of what was in there that we could apply and really delve deeper into the Metal Men and explore who they truly are as individuals and as a team — what held them together, and most importantly, explore their relationship with Doctor Magnus, the guy who created them, and what sort of relationship that really is.”

And bringing Nth Metal into it made sense, DiDio added, given its renewed import in the DC Universe after the events of the miniseries Metal by Scott Snyder and Greg Capullo. 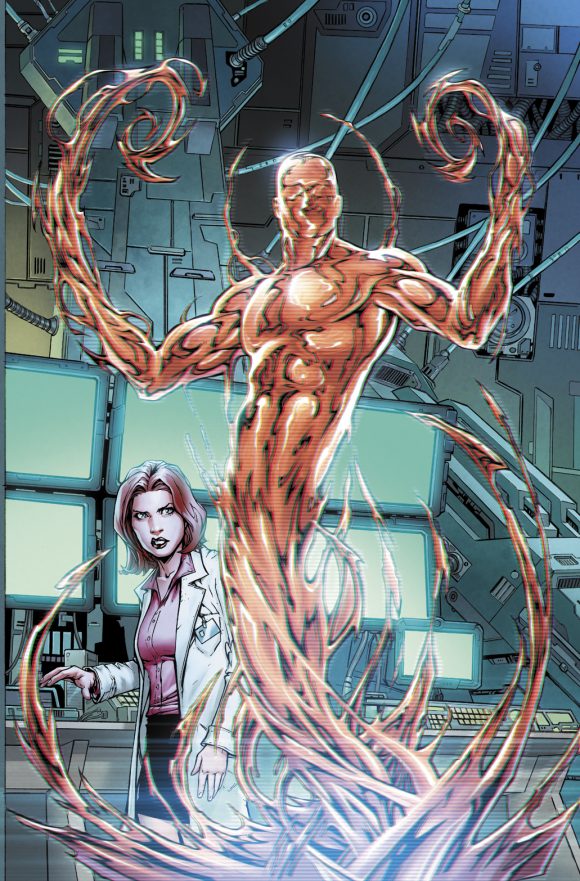 “I like to look at everything we’re doing and I love when an idea comes on the table and it really starts to take form and then it’s part of a story,” DiDio explained. “What’s interesting for me about Nth Metal is it’s a psychic metal that reacts to the emotions around it.

“Putting that type of metal in the middle of a team of metal, how would it change who they are and how they would behave, and more importantly, how would Doc Magnus react to this type of new dynamic within the Metal Men team?”

Putting renewed focus on a team like the Metal Men doesn’t come without its risks. They’re an inherently retro idea, so you have to sell modern readers on what makes them cool. At the same time, you have to appeal to traditional readers who are usually protective of more classic interpretations of characters.

DiDio and Davis appear ready to walk that line: 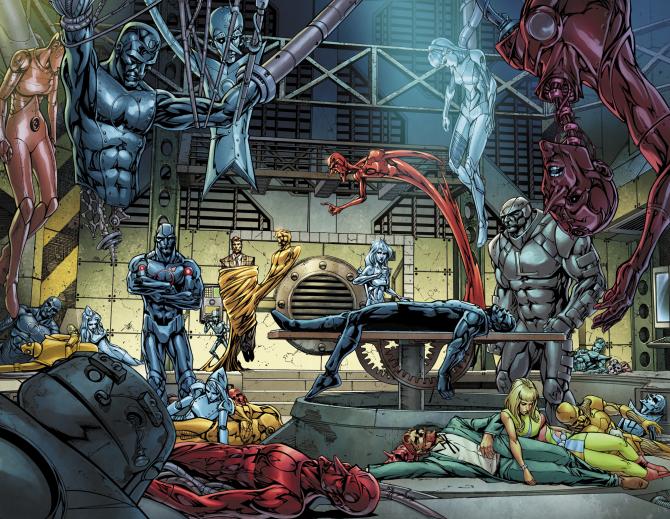 “Shane does a beautiful double-page spread in the first issue that really takes in all the interpretations of Metal Men throughout the years, all the different designs,” DiDio said. “I think at that moment, you realize that everything we’ve seen with the Metal Men is actually in play, and part of the overarching story. So what we’re trying to do is really acknowledge and tip our hats to all the interpretations that have come in the past and put them in a single place to show that we see this, we acknowledge it all, and now we’re about to move forward from here.”

“See, Dan didn’t just give me like, a spread, and just say, ‘Draw these guys standing together in this big homage piece.’ There is a gravity to that page.”

Such gravity that the creators say it’s a turning point in the relationship between Magnus and the Metal Men.

Generally speaking, the Metal Men themselves look much like they did when they premiered in Showcase #37, with some tinkering by the artist. 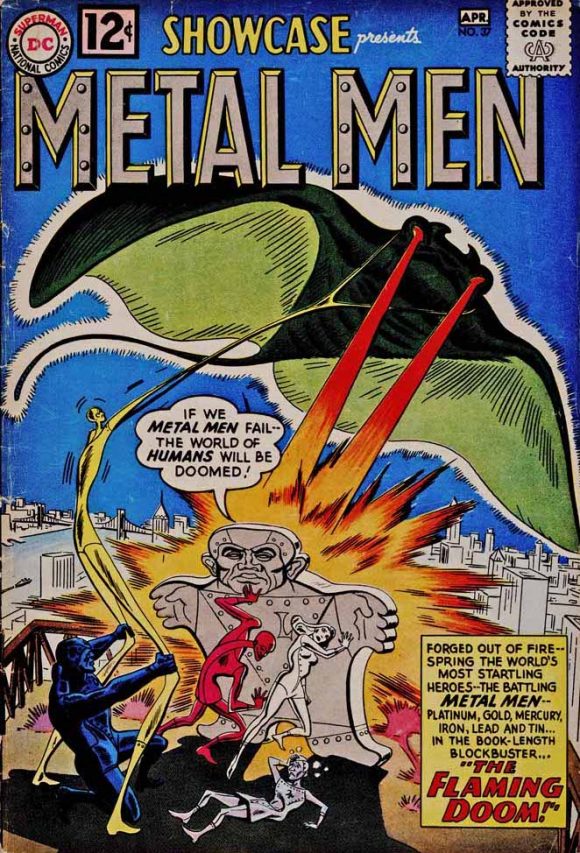 For example, he looked to make Lead more muscular than straight-up hulking: “Just changing his bulk around a little bit more, (giving him) more of a muscular body type rather than the bulky guy he was in the original. …

“I really didn’t come into this trying to reinvent the wheel,” he added. “I understand if it was a cartoon or movie, they would kinda animate them, but with the way comic panels are… my idea was the reader’s mind is animating them, transforming into things.”

DiDio tackled the team once before — with Jose Luis Garcia-Lopez in 2009’s critically acclaimed Wednesday Comics – and his interest in them goes back years before that.

“They’re some of my favorites,” he said. “Actually when I first did animation, back in the ’90s when I was over at ABC, I actually developed Metal Men as an animated series. We started … and it was all set to go, but at the last minute, that was when Disney bought ABC. 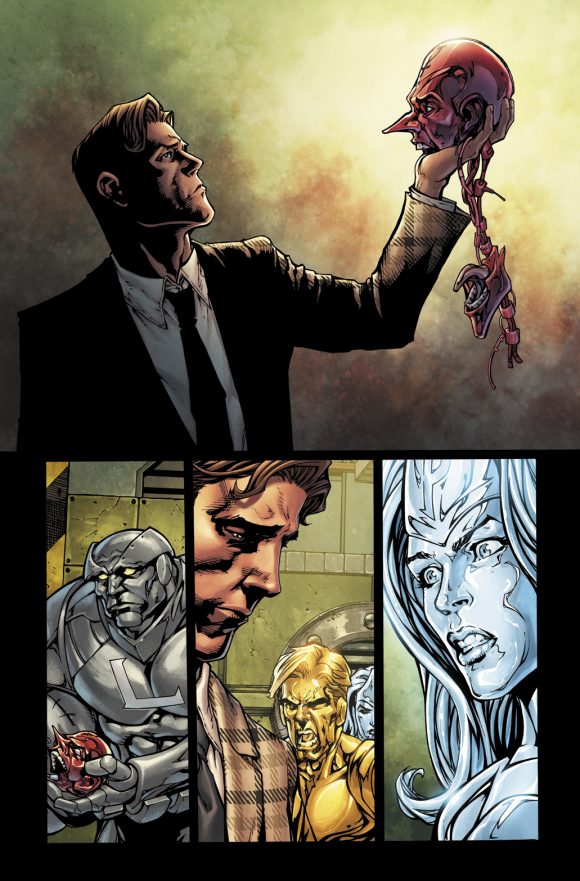 “We never made it to air, but it’s always been a favorite of mine. I’ve always seen some weird potential in these characters that I’ve always wanted to exploit and find a way to do it. I wouldn’t be working on this project now if I didn’t feel like it had a real story to tell, and a way to examine them that we’ve never seen before, so that’s the fun part. Once you get that story in your mind, it’s hard to get it out and honestly I enjoyed this so much I just wanted to do it myself.

“I find that it’s just a really interesting opportunity to really delve into some personalities and start to understand what makes these characters tick.”