Another big landmark in April…

Let’s take this from the top, shall we?

— March marks the 80th anniversary of Robin and DC will be producing a 100-Page Super Spectacular by an all-star cast of creators, complete with decade tribute covers. (Click here for the rundown.)

— April marks the 80th anniversary of Catwoman, so DC will be releasing a similar 100-Page Super Spectacular in her honor as well. (Click here for the whole shebang.)

But April also marks the 80th anniversary of the Joker — he and Catwoman both debuted in 1940’s Batman #1, natch — so guess what? 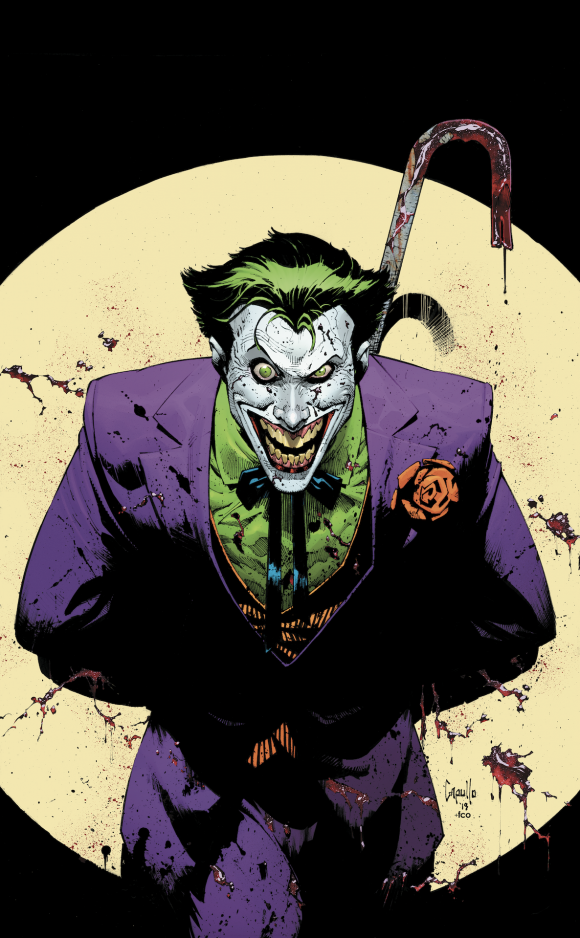 THE JOKER 80TH ANNIVERSARY 100-PAGE SUPER SPECTACULAR #1
Written by BRIAN AZZARELLO, PAUL DINI, DENNIS O’NEIL, SCOTT SNYDER, TOM TAYLOR, JAMES TYNION IV, and more
Art by RAPHAEL ALBUQUERQUE, LEE BERMEJO, SIMONE BIANCHI, TONY S. DANIEL, MIKEL JANÍN, JOCK, JOSÉ LUIS GARCÍA-LÓPEZ, EDUARDO RISSO, RILEY ROSSMO, and more
Cover by GREG CAPULLO
The Clown Prince of Crime celebrates 80 years of chaos! The Joker has been the greatest villain in comics since his debut and to celebrate we have a who’s who of comics’ finest talent giving the Harlequin of Hate the birthday roast he deserves. The stories feature a range of terror and anarchy, showing how the Joker has impacted Gotham City from the police to Arkham Asylum, from the local underworld to the Dark Knight and his allies! Make sure to RSVP to this birthday bash—you wouldn’t want to wake up with a Joker Fish on your doorstep, would you?
PRESTIGE FORMAT | ONE-SHOT | ON SALE 04.29.20
$9.99 US | 96 PAGES
FC | DC
This issue will ship with ten covers. Please see the order form for details.
1940s variant cover by ARTHUR ADAMS
1950s variant cover by DAVID FINCH
1960s variant cover by FRANCESCO MATTINA
1970s variant cover by JIM LEE and SCOTT WILLIAMS
1980s variant cover by BILL SIENKIEWICZ
1990s variant cover by GABRIELE DELL’OTTO
2000s variant cover by LEE BERMEJO
2010s variant cover by JOCK
Blank variant cover

— We have an EXCLUSIVE reveal for you related to this particular announcement. Click here to check it out.

— That’s one helluva line-up of creators there. Now since it seems fated that we’ll never see another Denny O’Neil and Neal Adams collaboration, my gut tells me we’ll see O’Neil paired with Jose Luis Garcia-Lopez, which would be pretty cool nonetheless. I could be wrong of course. We’ll see.

— I really dig Capullo’s main cover. During his Batman run, he generally drew the Joker in unorthodox incarnations. This here is classic Clown Prince of Crime.

— I could seriously get used to this anniversary 100-Page Super Spectacular thing.