I’m obviously predisposed to look favorably upon anything Batman ’66 and I’m also pretty much in the tank for anything produced by the terrific trio of Lee, Mike and Laura Allred.

But if you were going to ask me to pair TV’s Caped Crusader with any other DC entity, the Legion of Super-Heroes would be pretty low on the list. I’ve just never considered myself much of a fan.

Yet it doesn’t take Chemical King to figure out that the Allreds have hit on the perfect alchemy in Batman ’66 Meets the Legion of Super-Heroes, a one-issue corker that will have your cheeks hurting from smiling by the time you reach the final panel.

Unlike the unnecessarily dark finish to Batman ’66 Meets Wonder Woman ’77 by a different creative team (click here if you want to know what I’m talking about), Batman/Legion is an outright celebration of everything optimistic and silly in the Silver Age, whether it’s Robin learning how to use a Legion flight ring, Egghead squaring off against Universo, or even Mike and Lee Allred giving themselves cameos as two Gotham City scamps.

This is pure, unadulterated comic-book love.

Here’s the premise in a Bat-nutshell: A handful of Legion members go back to 1966 to recruit Robin, whom they consider the greatest teen superhero of them all. (Superboy is notably absent.) Universo has also travelled back 1,000 years with the aim of preventing the Legion from existing in the first place. Egghead, meanwhile, is headed to the future with bad intent.

And then a lot of fun stuff happens, with Easter eggs and comedic gags galore.

There are two particular high points.

The first is when the Legionnaires tour the Batcave and the Allreds answer the question of what’s behind the “fourth wall” that we never see on TV: 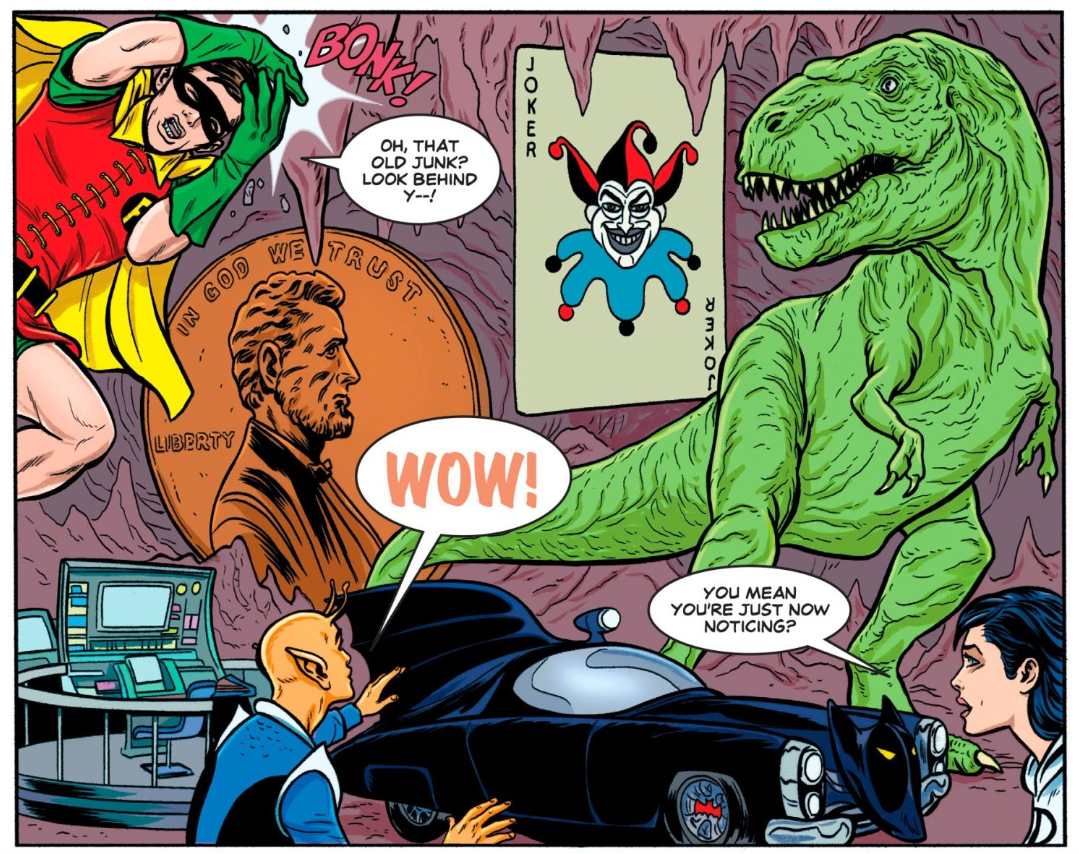 At the same time, the teens regale Robin with tales of his exploits that are legend in the 30th century — all taken from Silver Age comics that the TV Boy Wonder has no recollection of: 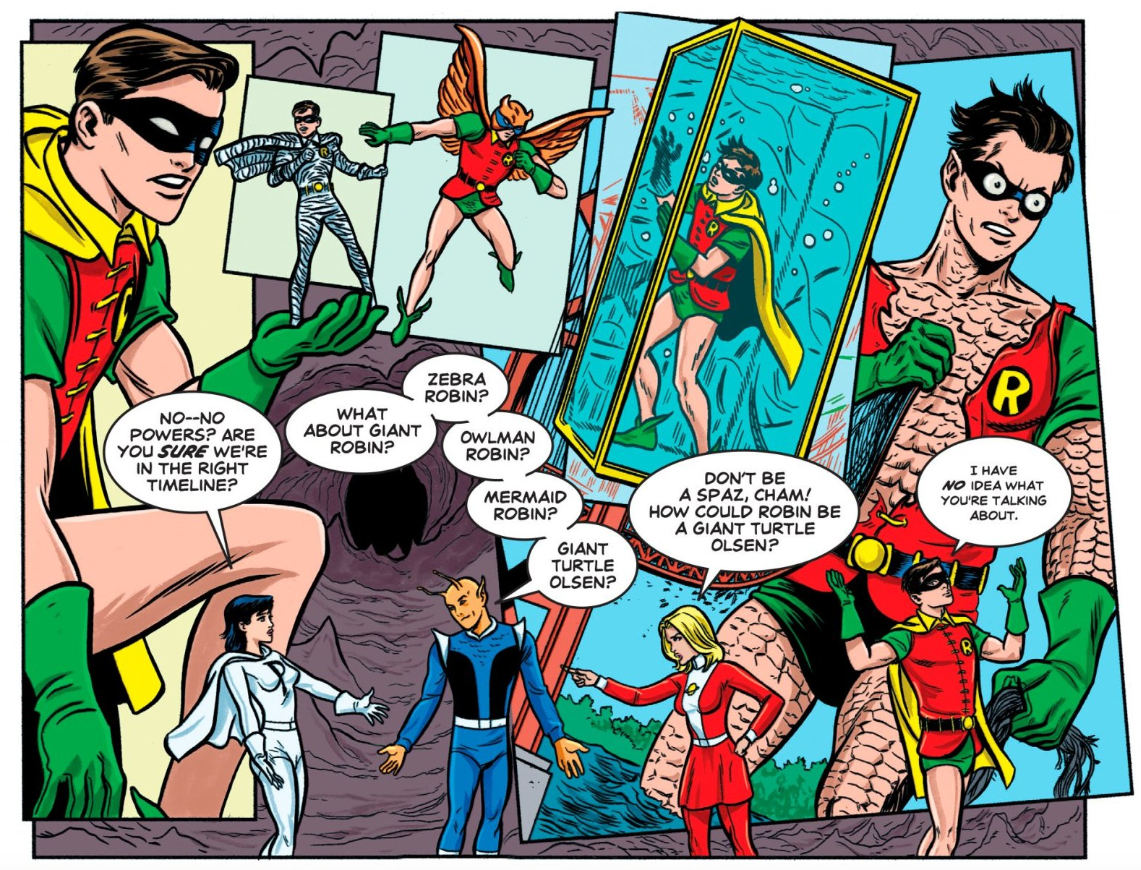 But the centerpiece is a whiz-bang, full-page “board game” that emulates a disagreement between wise and patient Batman and the impudent and stubborn Brainiac 5 on just where Egghead is in 2966 Gotham. (SPOILER ALERT: Batman’s right, of course.) 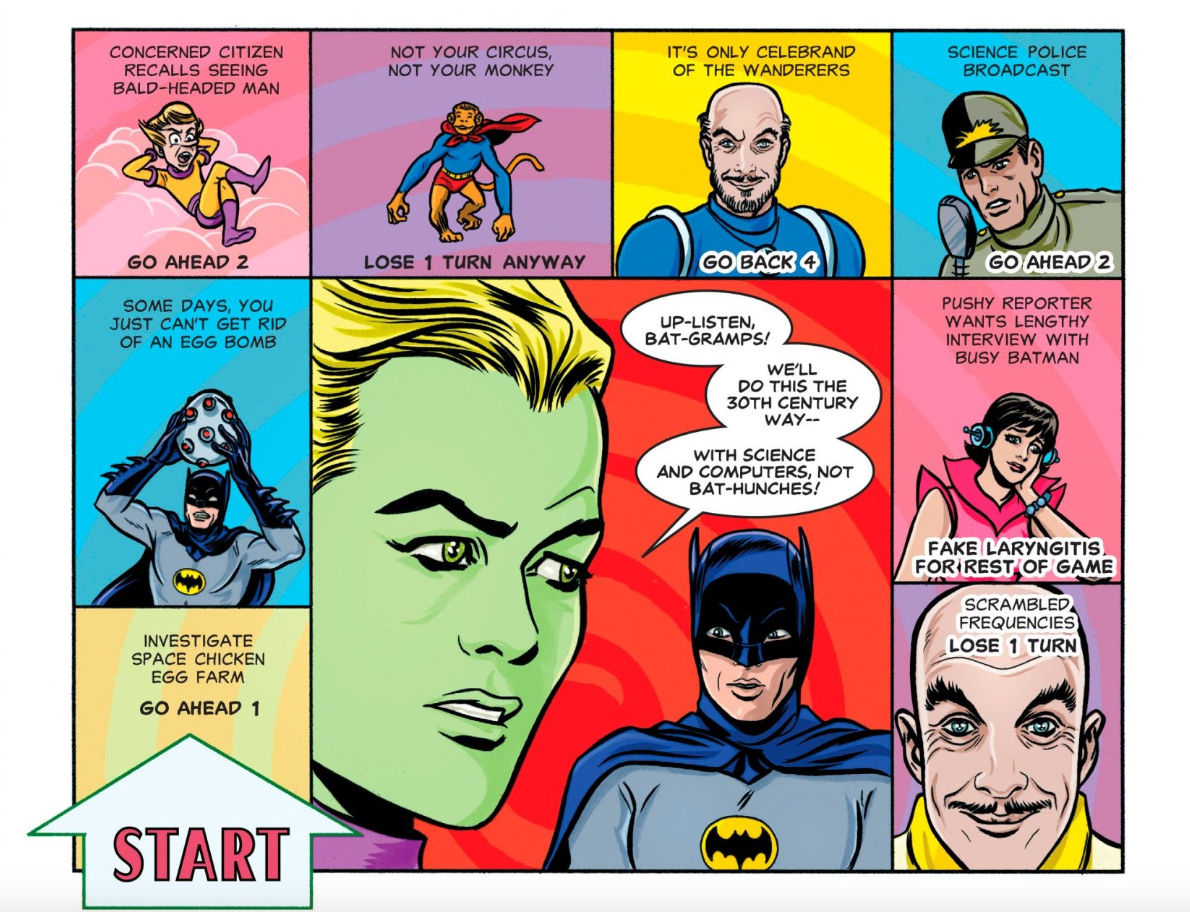 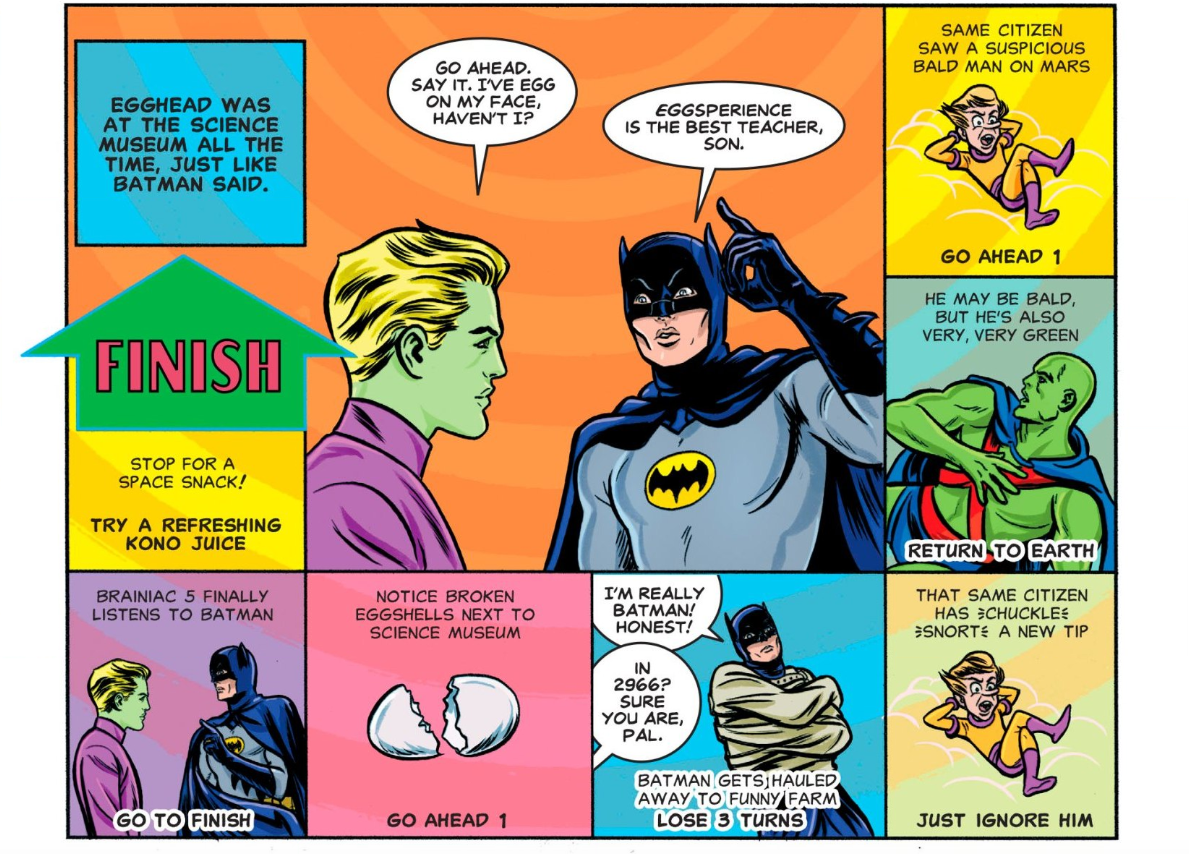 Taking a step back, this is the first time DC has published a Batman ’66 crossover with one of its own comics properties. Everything else to date has been with other TV shows, like The Green Hornet, the UK Avengers or even the in-house Wonder Woman ’77.

So I can’t help but think that this would be a great way to revive the Brave and the Bold concept: as a series of Batman ’66 adventures with heroes and villains specifically of the Silver Age vintage. Think how much fun it would be to see the Allreds turned loose on Batman ’66 Meets Green Lantern or Metamorpho (which Mike drew in Wednesday Comics) or the Teen Titans or Metal Men or the Flash or the Inferior Five or, yes, finally, Superman, all in their mid-’60s styles and surroundings. 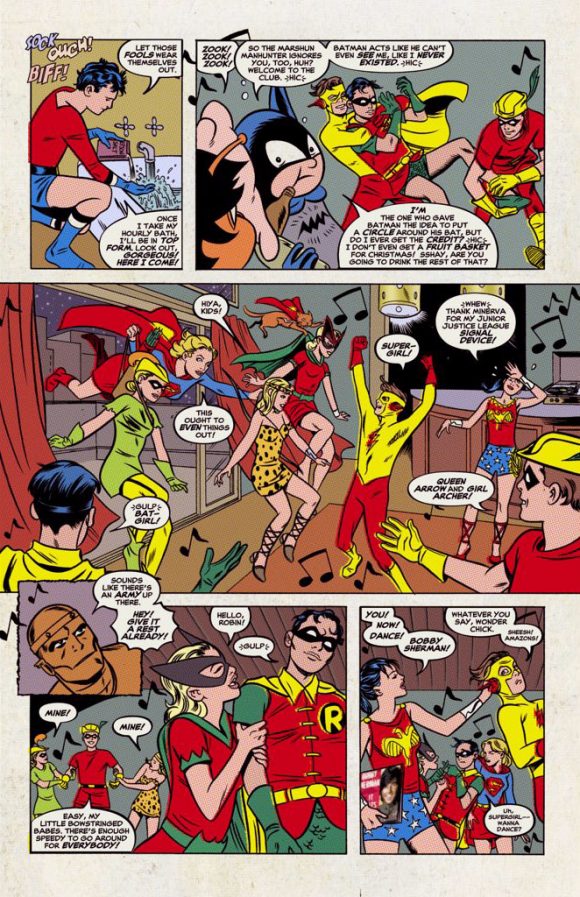 No crossover or likeness rights to worry about. Just imaginative, exultant storytelling.

It’d also be great to see Batman ’66/Legion collected along with the Allreds’ other outstanding Batwork, like Batman ’66 #30 and the homages from Mike’s issue of Solo, as well as all of his covers from the past several years. 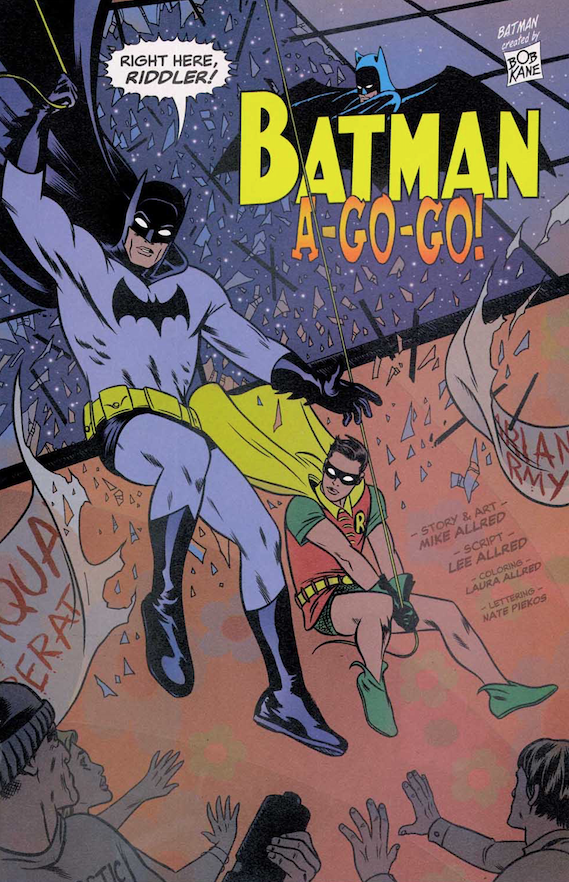 In any event, hustle your way to your comics shop to pick up the issue. It’s been out digitally for a few weeks but Batman ’66 Meets the Legion of Super-Heroes #1 is a story that demands to be held in your hands like, well, a comic book.

Now, if only the Eisners gave out awards for Fun. This would win in a heartbeat.