BATBOOK OF THE WEEK: Robin War #1

This year was the 75th anniversary of Robin the Boy Wonder and you’d only kind of know it.

DC published a retrospective hardcover, the kind they put out for any character or team that’s hit a big milestone, but there was no Robin Variant Cover Month and only a barely used Robin 75 logo.

This surprises me since just about anything connected to the Batfamily gets a leg up where sales are concerned — and it’s even stranger when you consider there are no less than five monthly titles starring once and present Robins, not to mention a new weekly, the Titans Hunt miniseries, the onetime Boy Wonder’s high profile in the Arkham comics offshoot, Tim Drake’s role in Batman Beyond and Carrie Kelley’s return in Dark Knight III. The Robins are a franchise within a franchise.

But even without anniversary trappings, this is a big month for Dick Grayson and his red-breasted brethren and sistren. In last week’s BATBOOK OF THE WEEK column (which you can read here), Grayson co-writer Tom King pointed out that the former Robin is in a full quarter of DC’s output this month. That’s chiefly down to the mini-event Robin War, which kicks off this week (and is also written by King). 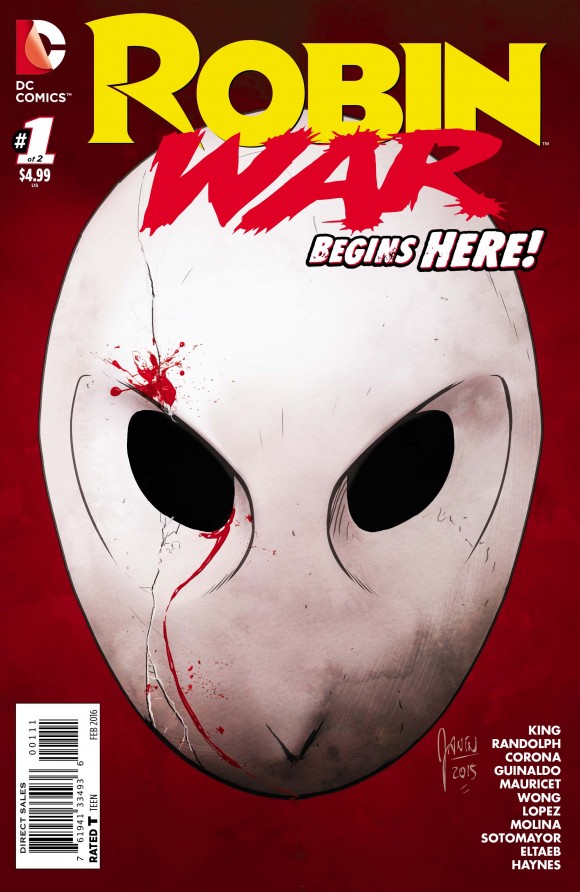 The premise of Robin War seems to be the Court of Owls vs. All the Robins Running Around, plus some obligatory infighting. I haven’t looked into it much beyond that because, call me old-fashioned, I like not to be spoiled.

I’m down with the Court, by the way. It’s been a neat addition to the modern DCU and I was intrigued by the reveal a few years ago that Dick was to be groomed as a Talon before Batman took him in. A little contrived maybe, but handled well.

Robin War will run throughout the month in the various Robin titles, like Grayson, Robin: Son of Batman, We Are Robin, and so forth.

So, that’s cool, but really I’m just using all that as an excuse to have our second ROBIN WEEK. We had our first one a year ago when Damian Wayne, my second favorite Boy Wonder, returned from the great beyond. Now, we’re back with another round.

Actually, we unofficially started over the weekend with Robin, the Teen Fashionista — a sartorial survey of Dick Grayson’s Bronze Age threads that you can read by clicking here. Then join us all week for a load of 13 COVERS salutes to the Greatest Sidekick(s) of Them All.

ALSO ON THE BATSHELVES THIS WEEK: Speaking of the Court of Owls, there’s Absolute Court of Owls, which is on my Chanukah list. There’s also Batman and Robin Eternal #9; Teen Titans #14; DC Presents Robin War 100-Page Spectacular #1, which reprints a bunch of salient Robin stories; DC Presents Titans Hunt 100-Page Spectacular #1, which reprints a bunch of significant Teen Titans stories; and the Batman ’66 Vol. 4 hardcover.