BATBOOK OF THE WEEK: Grayson #14

There are other Batbooks besides Dark Knight III #1 this week, y’know …

We’ve published a metric ton of stories in the past week dedicated to the original Dark Knight Returns, what with Dark Knight III coming out this week.

But the main reason I’ve been focusing on the original instead of the new book is because I have no real use for any Dark Knight sequels. (I’ve featured a lot of the variants because A) they’re beautiful and B) they largely pay homage to the first story.)

Now, I will read DKIII — or at least the first issue. Blind curiosity has the better of me. And, hey, maybe I’ll be really surprised and I’ll like it. (UPDATED: You can read my spoiler-free review of DKIII here.)

But there are other books out there this week that I have much more confidence in — and Grayson #14 is at the top. 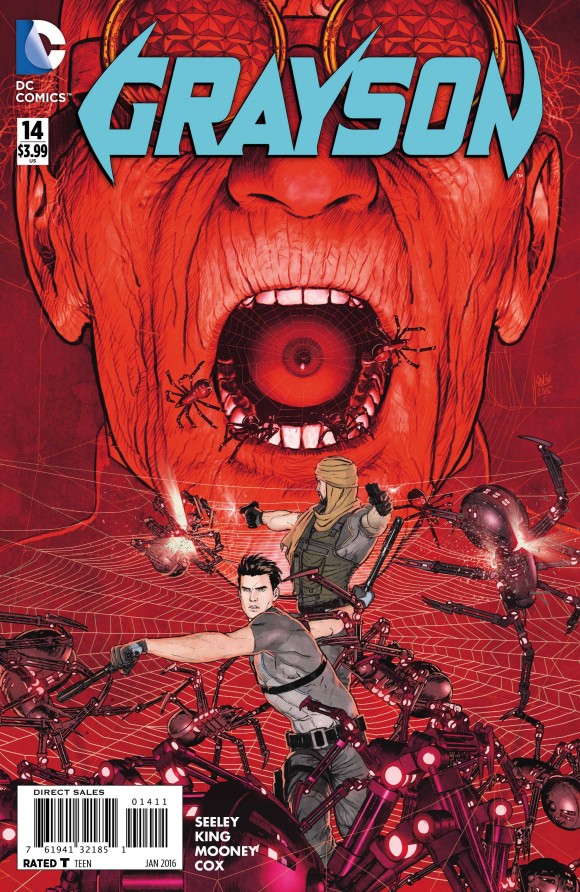 As I’ve written a number of times lately, Grayson is a consistently entertaining and funny comic book that keeps getting better. I talked to writers Tim Seeley and Tom King (artist Mikel Janin wasn’t there) about it recently, particularly with an eye toward just how long this book will be around.

“Our plan is—and it has been from the beginning—to elevate Dick to become the fourth tier of the DCU,” King said. “To have it be Batman-Wonder Woman-Superman-Dick Grayson. He’s a 75-year character and I think he has that potential. My grandmother knows who Robin is. … Dick Grayson’s in 12 books in December. That’s a quarter of our line. … So we have a huge plan but we have to make it so that it fits into this world. We want Dick Grayson to be at the heart of the DCU and that’s what he’s going to become.”

I asked whether they were surprised that the success has lasted into a second year since a lot of fans were anxious about Dick taking the mask off. 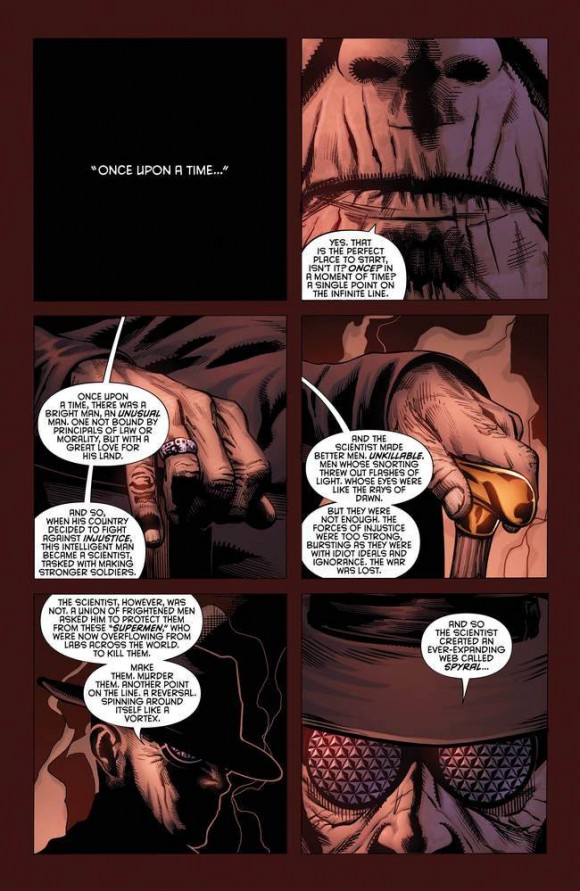 “I don’t think we’re surprised. We had no expectations,” Seeley said. “When we started talking about this, we were just, like, well we’ve got an idea. I don’t think we ever sat down and said, ‘Well, here’s what happens if it doesn’t work.’ We just said, ‘This is gonna work,’ I think. … And we didn’t change the character. We just changed his genre situation. It’s not like it’s a different character in the same suit. It’s the same guy in a different…a different pair of pants, really. To us it was just continuing a Nightwing story in another genre. That’s it. ”

King added: “I had utter faith in Dick Grayson as a character. I knew if I could sort of nail down what the greats had done—what Marv Wolfman had done, what Chuck Dixon had done—and get that out to an audience, then it was going to succeed. I had faith in that.

“But I should say that I’m always surprised at any success! I’m always…I write scared,” he said with a laugh. “So yeah, when someone tells me they read the book and loved it, I’m insanely grateful, in sort of a surprised way.”

Seeley chimed in: “Tom and I, we’re at conventions and people come up to us all the time and say, ‘I didn’t wanna like this. I hated this idea. But I love this book.’ We hear that constantly!” 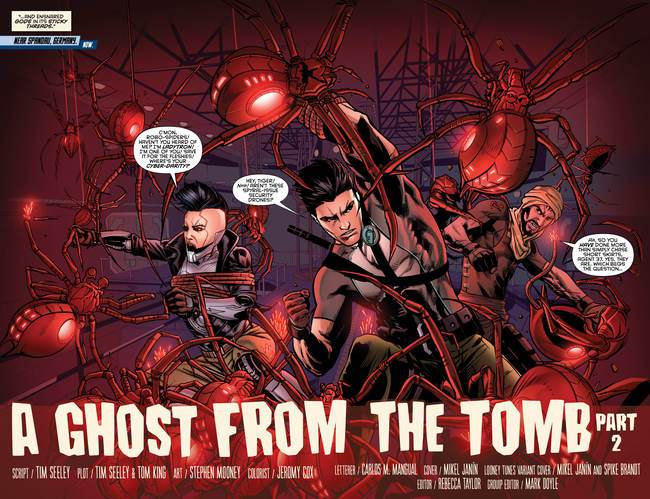 It doesn’t look like Dick’s getting back into costume any time soon: They explained that they have a roughly 40-50-issue plan ahead of them.

“We want the book to be constantly changing, so one arc, he’s working with Spyral. One arc is he’s partnered with Helena. One arc, she’s his boss and they have a different dynamic and now he’s fighting Spyral. Whatever the case, we’re just gonna be flipping the paradigm all the time. Which is how you keep it fresh, you know, and interesting. And it gives us tons of mileage,” Seeley said.

The funny thing is that I’ve looked at Grayson as the outgrowth of two worlds — Grant Morrison’s Batuniverse and the swingin’ ’60s British TV show, The Avengers.

Turns out, King says he hasn’t even seen the zippy adventures of John Steed and Emma Peel — though Seeley accused him of lying.

ALSO ON THE BATSHELVES THIS WEEK: Robin: Son of Batman #6. Batman and Robin Eternal #8. We Are Robin #6. Batman: Endgame Director’s Cut. Batman: Arkham Knight — Robin Special. They all should scratch that non-DKIII Bat-itch …