We pay tribute to his finest Bat-moments…

For ADAM WEST: A Salute to the Brightest BATMAN, a series of interviews and tributes to the greatest Caped Crusader, click here.

As I’ve noted many times, Adam West is the reason I do this. He introduced me to Batman and everything followed from that.

He was born Sept. 19, 1928, and I’ve spent barrels and barrels of digital ink writing about his exploits and legacy — and those of his Bat-colleagues — over the last few years. It’s been an incredible joy.

But I’ve never taken a step back and looked at his best, coolest, funniest, wackiest moments as Batman. I did it for Burt Ward’s Robin when it was the erstwhile Boy Wonder’s birthday last year (click here), so I’m doing it for Adam West here.

Because while he wasn’t actually Batman, he was an underrated performer who had a gift for melding comic timing with an action persona.

13. Batman Gets Booed. One of the show’s most improbable conceits was the idea that Gotham City would ever turn against its stolid defender. But it happened from time to time, with one notable case being Otto Preminger’s Mr. Freeze episode: Freeze has managed to corrupt Batman’s image and in one scene, Bruce Wayne happens upon a boy booing a picture of Batman in a store window. What follows is one of Adam West’s most hysterically deadpan line readings: “Nothing has ever cut me so deeply to the quick. No blow ever struck by any arch-villain has ever hurt me so acutely as that little boy’s boo.” And … cue the Bat-transition.

12. The Great Escape. One of these days I’ll rank the Top 13 Death Traps on this show. There are so many great ones. One of them unlikely to make it will be from The Penguin’s Nest/The Bird’s Last Jest. It’s pretty mundane. But it’s the solution that gives West one of his best straight lines. Batman and Robin are stuck behind the Batshield under machine-gun fire. Finally, Batman surmises it’s time to get out from behind the barrier because he’d deduced the Penguin’s crew is out of ammo. How did he know, asks Robin. “Easy. I’ve been counting their bullets,” is the stone-faced reply.

11. Fingers’ Player-Piano Trap. OK, if escaping from the Penguin’s trap is deadpan, then the escape from Fingers’ piano-roll machine is the other end of the musical scale. Batman and Robin manage to avoid getting perforated by … yodeling and singing nonsense.

9. A Date with Miss Kitka. Bruce and Miss Kitka’s date from the movie kind of makes you squirm but it’s this line that brings everything to a … uh… climax: “Miss Kitka, I have the strangest feeling that I am about to be utterly and madly carried away!”

8. Bruce Wayne vs. the Bad Guys. Adam West gets to leave the cowl and tights at home when he takes on the villains and their henchmen as kidnapped millionaire playboy Bruce Wayne. One of the dopiest conceits of the show was that Bruce and Dick could never leap into action for fear that someone might figure out they were Batman and Robin. In a city of 8 million. (Then again, Egghead figured it out.) But here, the filmmakers let all that slide and give West a tuxedoed fight scene worthy of James Bond. He even gets a double punch in — and escapes, to boot. 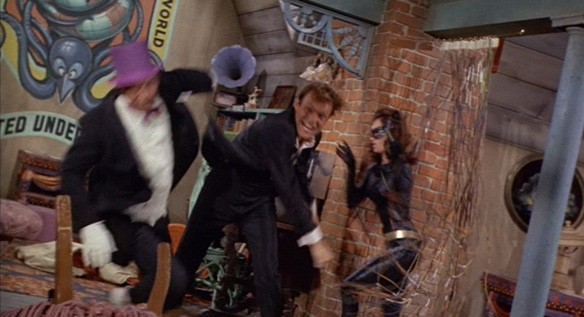 7. Surf’s Up! Joker’s Under! C’mon, Batman in baggies, rising to the challenge on his long board? All while breaking out his Batspray Shark Repellent to fend off the second shark to menace him? Cowabunga! 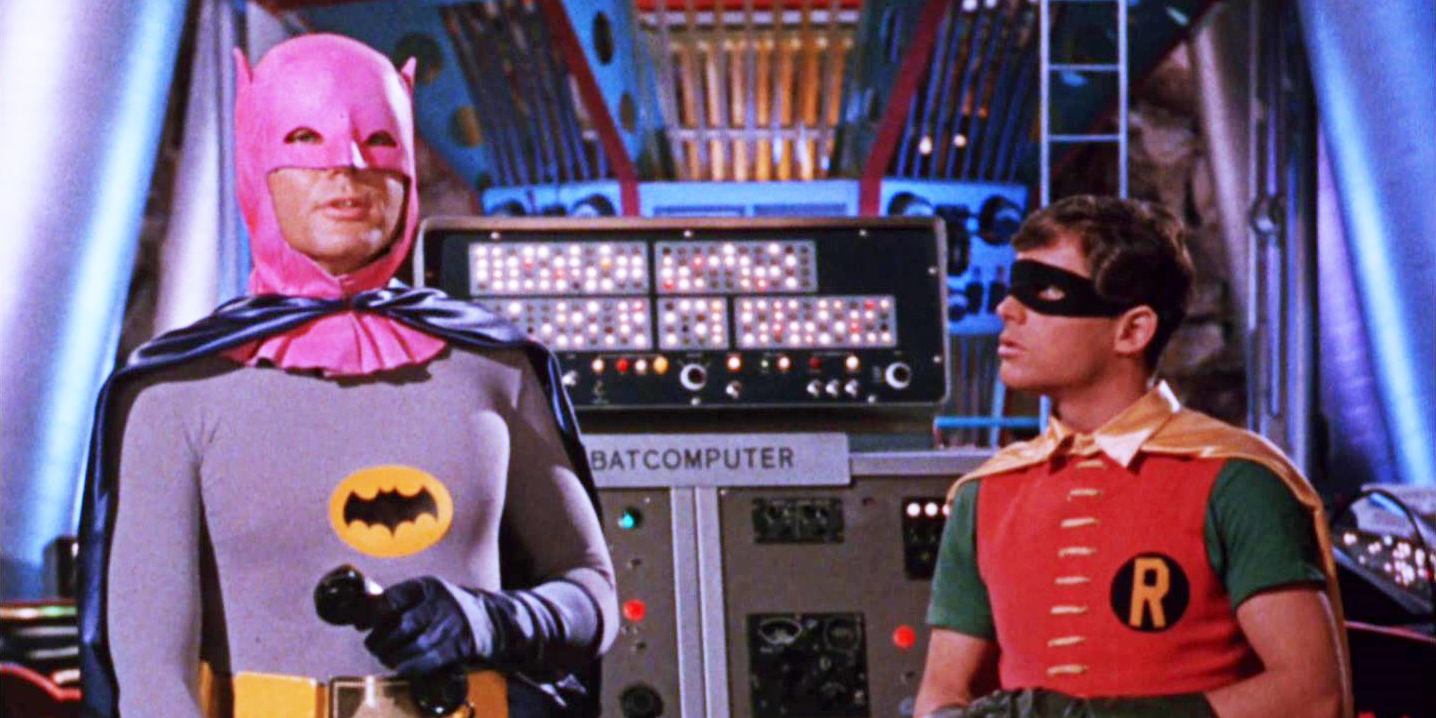 5. Swinging ’60s. Y’know what they never did enough of on the show? Have Batman and Robin swing in on their Batropes. They did it but never enough for me. Best time? When Batman swung in to save Robin from the pit of man-eating tigers in The Purr-fect Crime/Better Luck Next Time. This is when you get to see Batman as straight hero. (OK, so it was probably a stunt double. Sue me.) 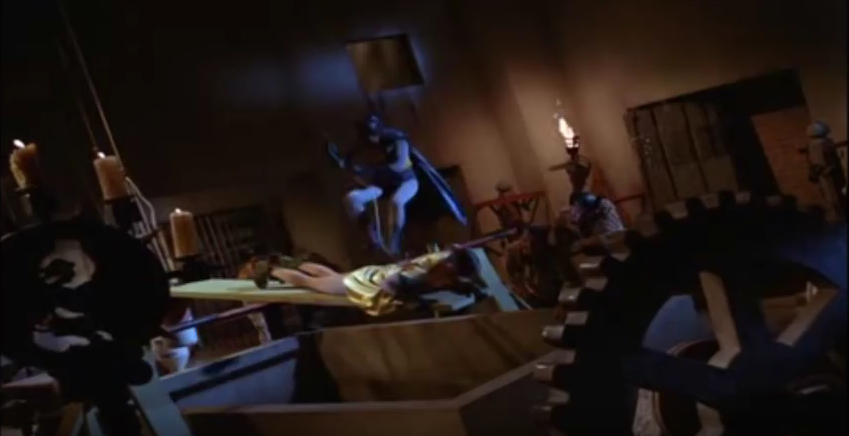 4. Any Scene With Julie Newmar’s Catwoman. Their chemistry was palpable. It’s hard to pick just one scene, but I’m going with the one from The Cat’s Meow/The Bat’s Kow Tow, where Batman captures her, they nearly kiss — and Robin interrupts them then blurts out “Holy mush!” as the Caped Crusader and the Feline Fatale stroll off.

3. Batman vs. the Shark. The opening set piece in the 1966 movie is a sterling example of absurdist, deadpan action — exactly what Batman was known for. I’m not sure which part’s the best — the plastic thumping sound when Batman repeatedly punches the shark, Robin’s unnecessarily complicated acrobatics on the ladder or the use of the Batspray Shark Repellent to dispatch the marine predator from the Caped Crusader’s leg. Aw, who am I kidding? It’s the Batspray.

2. Batman vs. the Bomb. If Batman vs. the Shark is winking deadpan, then Batman vs. the Bomb is pure slapstick. First, there’s the bomb itself, which is ripped right out of a Looney Tunes cartoon. Then, there’s the madcap dash and all the improbable obstacles: the (wooden) ducks, the young lovers, the Salvation Army band, the nuns — in case the Salvation Army wasn’t enough. Then, there’s Batman’s burst of frustation, “Some days you just can’t get rid of a bomb!” — which just may be his most quoted line of dialogue ever. West goes all in for the entire sequence, awkwardly running around the pier with urgent abandon in full commitment to his comedic craft.

1. The Batusi. For so many people, Adam West and the Batusi are synonymous and the amazing part is that they both debuted in the show’s very first episode. So how do you top it? Bring it back — and improve upon it by letting Batman cut loose on King Tut’s henchmen to an even zippier musical accompaniment. But you can’t go wrong with either one. Because if Batman ’66 was supposed to be silly (and it was), and if the Batusi is its silliest moment (and it was), and if Adam West is to be commended for playing Batman straight as an arrow amid such silliness (he is), then it only goes to follow that the Batusi is Adam West’s Grooviest Batman Moment.