Or one of them, anyway…

Little did I know when I went to the New-York Historical Society’s Superheroes in Gotham exhibit on Manhattan’s Upper West Side that I’d be making a pilgrimage to see the greatest car in pop-culture history.

I mean, I knew that George Barris’ Batmobile was going to be there but that’s not why I went. I went because I wanted to check out the exhibit, which runs through Feb. 21, 2016, as a whole (click here for info). 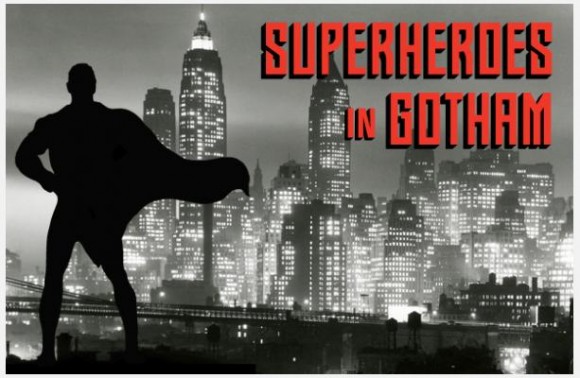 What I didn’t realize was that Barris, who famously designed this magnificent machine from the Ford Futura concept car, was going to leave us so shortly after.

My wife says I’ve been living a charmed Bat-life the last couple of years, and she’s right. I’ve gotten to do many things and meet many people that I never rightly expected.

Unfortunately, I never got to meet George Barris — but I have been lucky enough now to see two of his creations up close and ride a couple times in a spectacular replica. (For 13 QUICK THOUGHTS: Why the ’66 Batmobile Was the Greatest Car Ever, click here.)

The first time I saw the Batmobile was at the New York Auto Show when I was maybe 8 years old. I was disappointed that it was covered in fuzz and only learned decades later that that was a “thing” back then. .

(UPDATED: Thanks to the ultimate Batmobile expert — Mark Racop of Fiberglass Freaks, whom I’ve profiled before — informs me that the Batmobile I saw as a kid is the same one I just saw at the Historical Society. Holy full circle!) 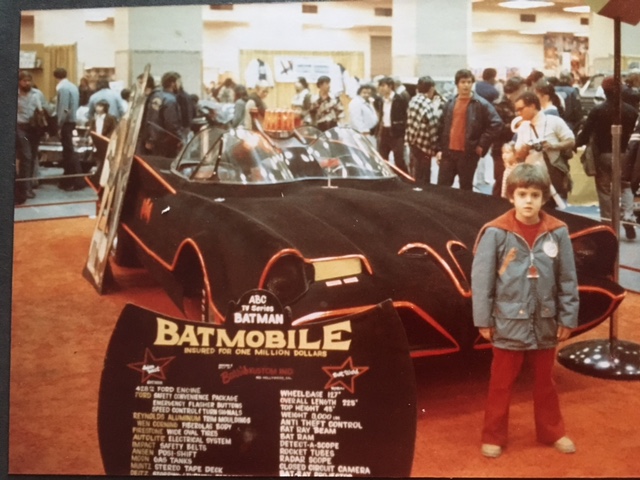 (I think I might not be smiling in this picture because I was terrified that I was going to get in trouble for going inside the ropes. My Dad promised it would be OK, but I wasn’t so sure … )

But just last month I made my way over to the Superheroes in Gotham exhibit, which is an exploration of comics’ New York City roots. It’s a nice exhibit, complete with important comics under glass and videos playing.

For me, the best parts were Julie Newmar’s Catwoman bodysuit and Barris’ Batmobile #3 in the lobby of the Historical Society.

I just stood there and gawked, taking as many pictures as I could: 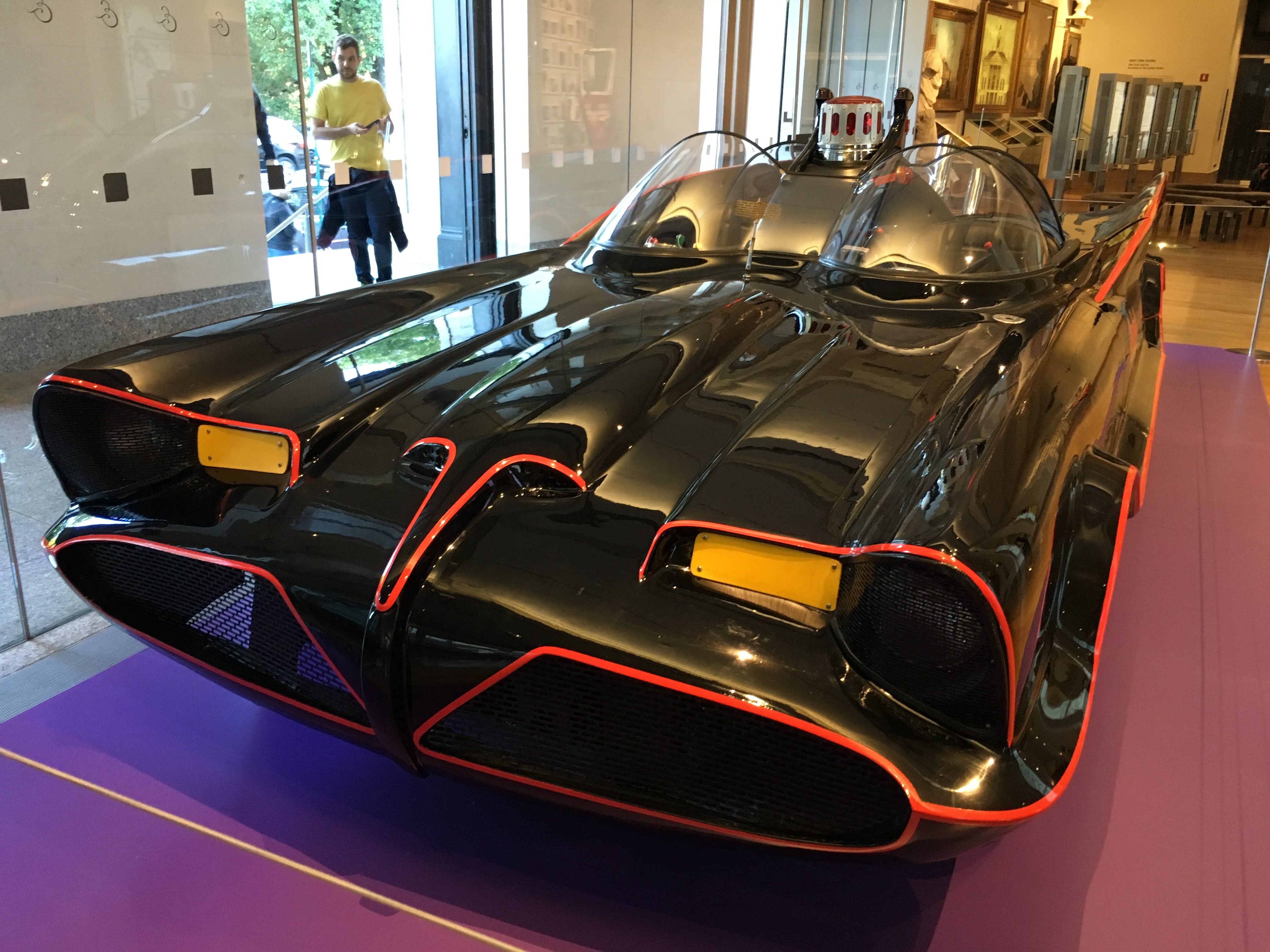 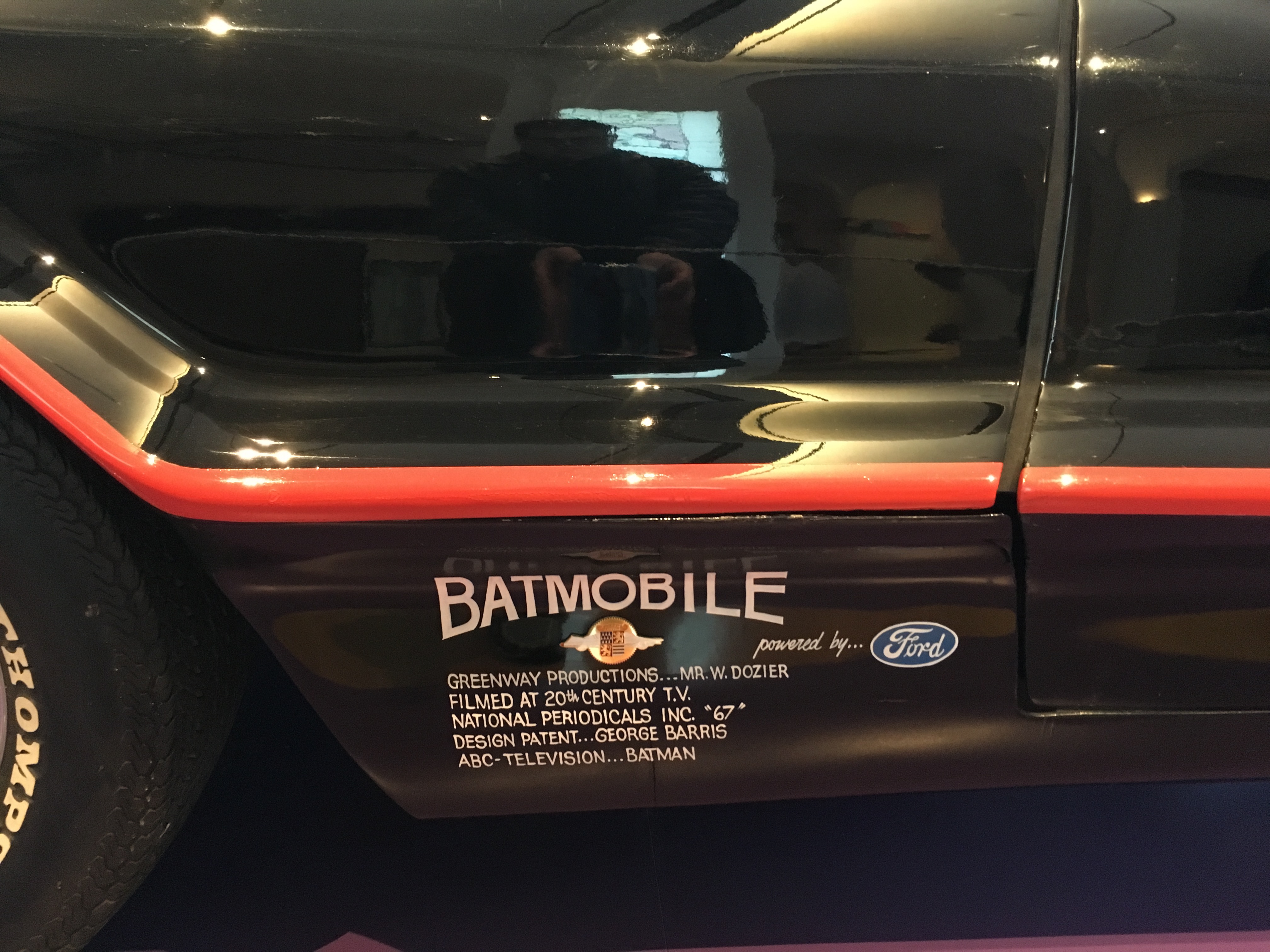 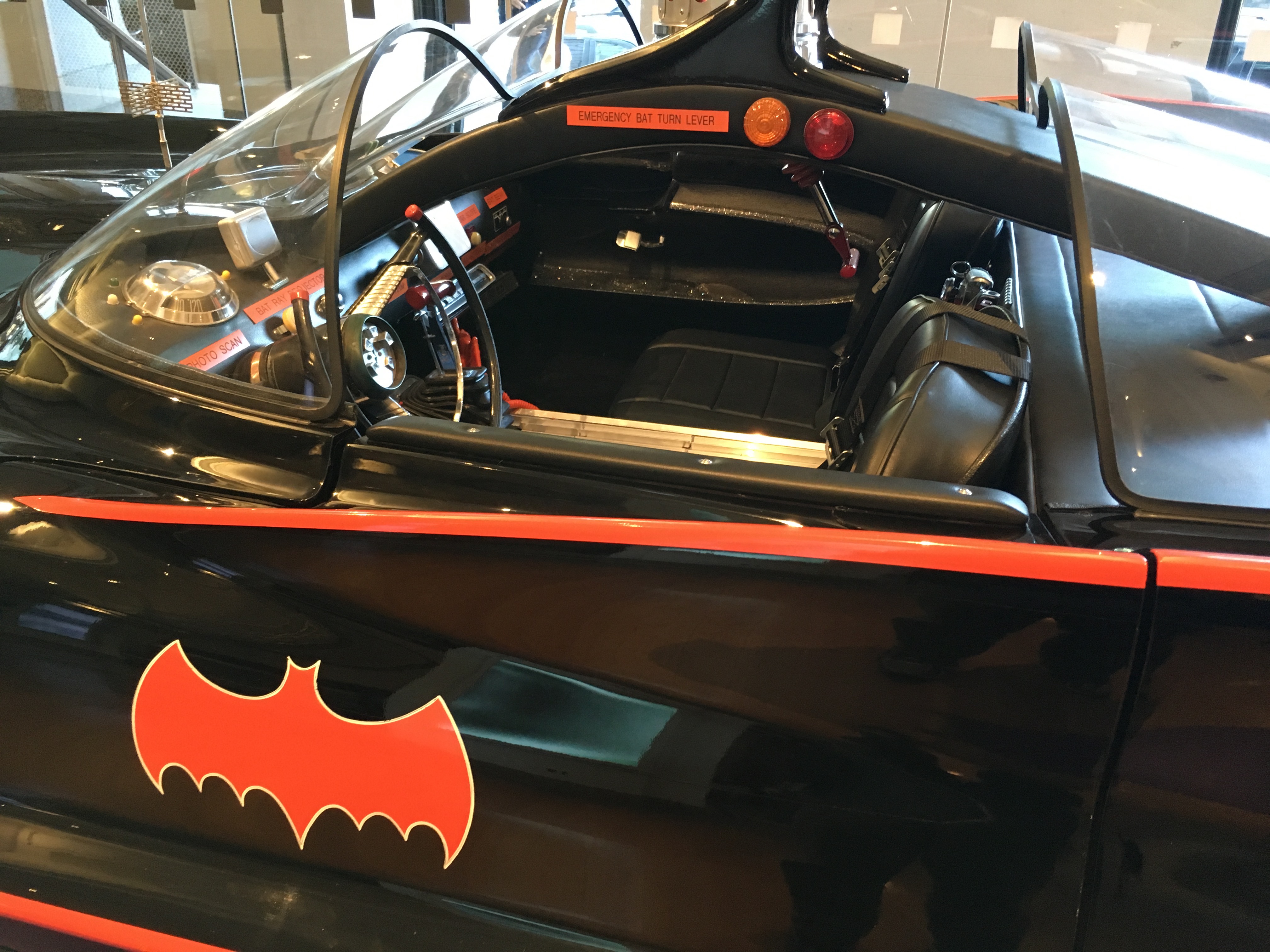 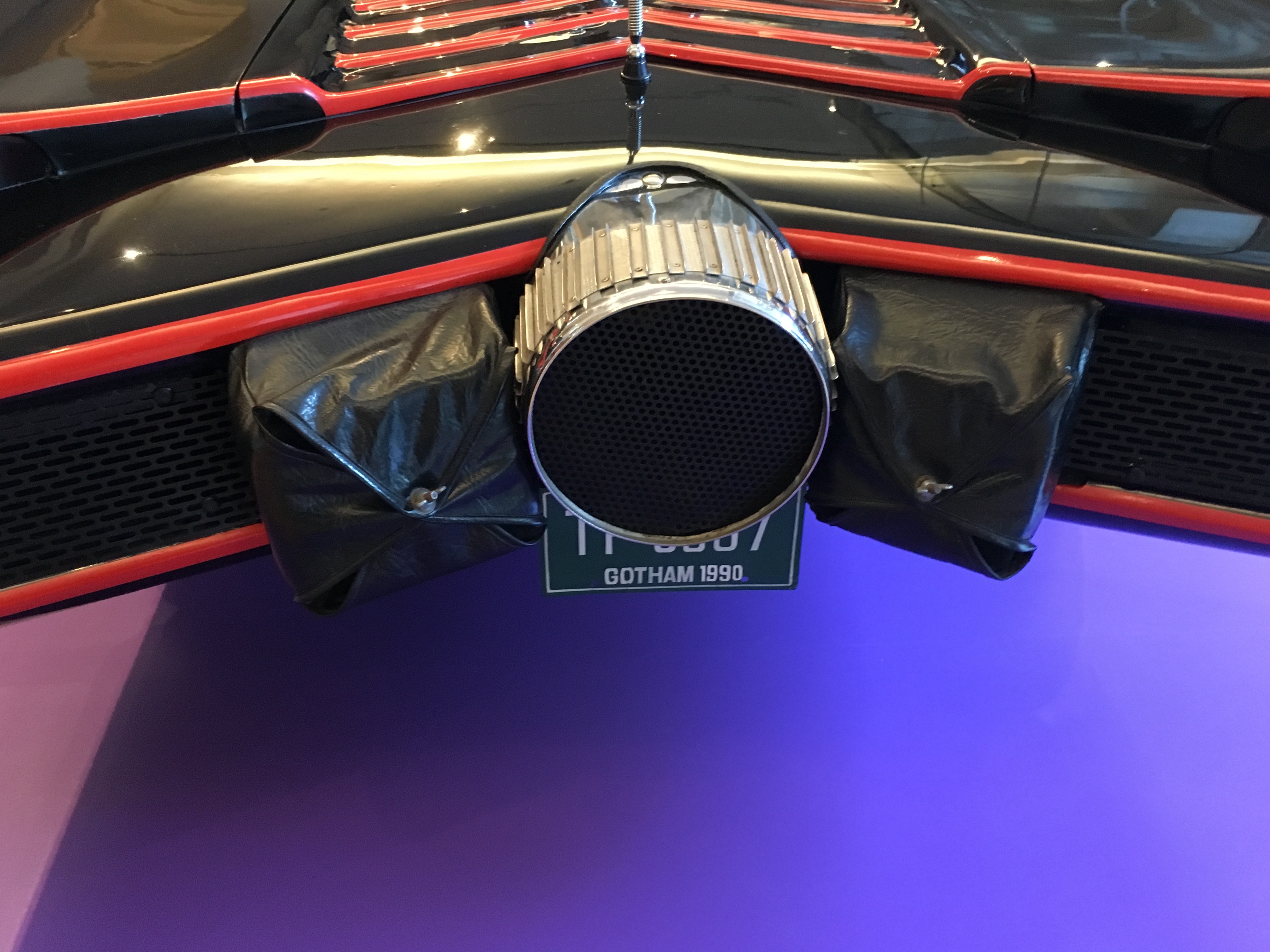 So I gotta tell you, if you’re anywhere close to the city over the next few months, whether it’s for Thanksgiving, Christmas, New Year’s or any other excuse, you gotta go check it out.

Because if, like me, you wear your Bat on your sleeve or back bumper … 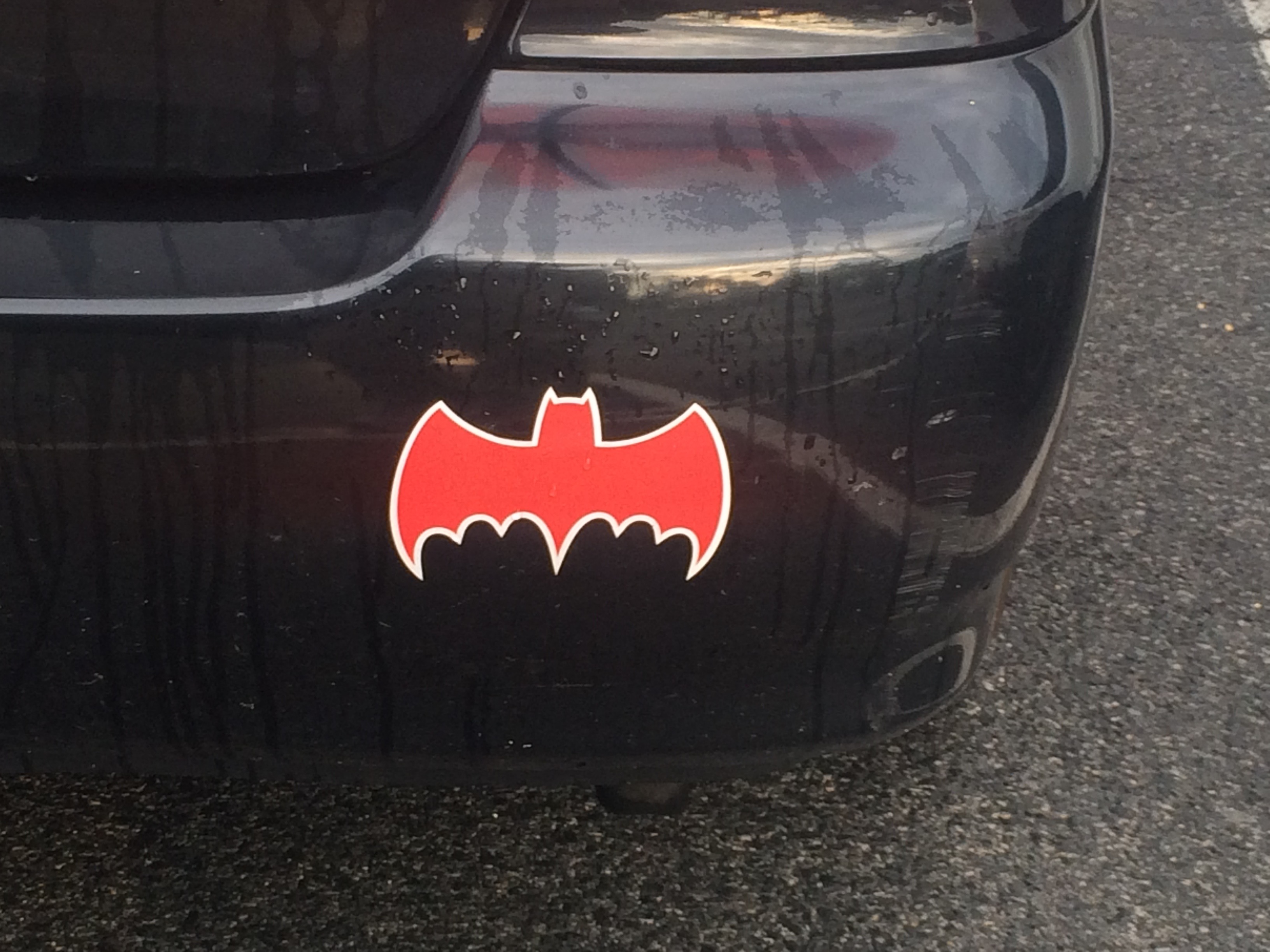 … there’s nothing like communing with the bona fide Batmobile: 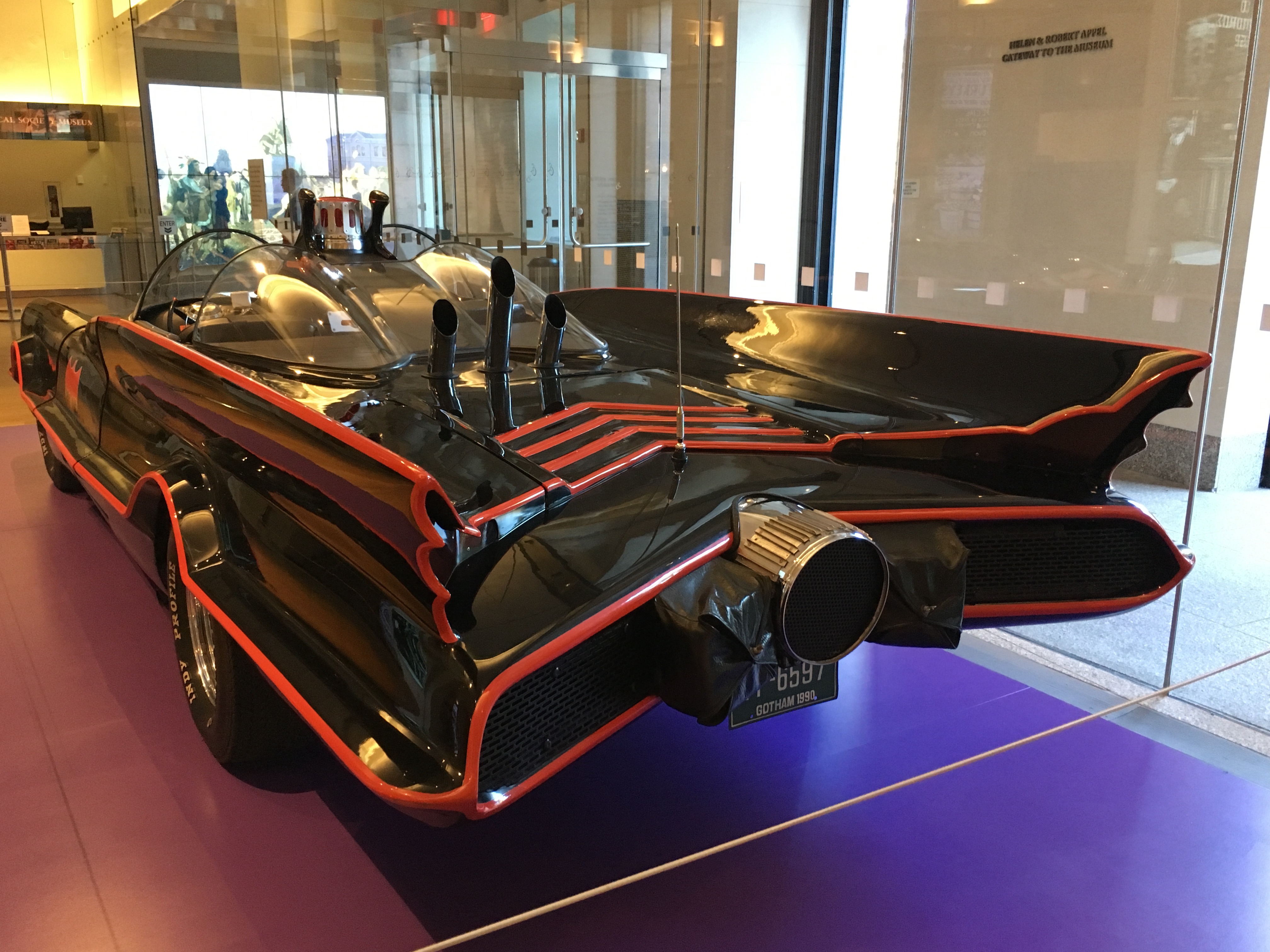 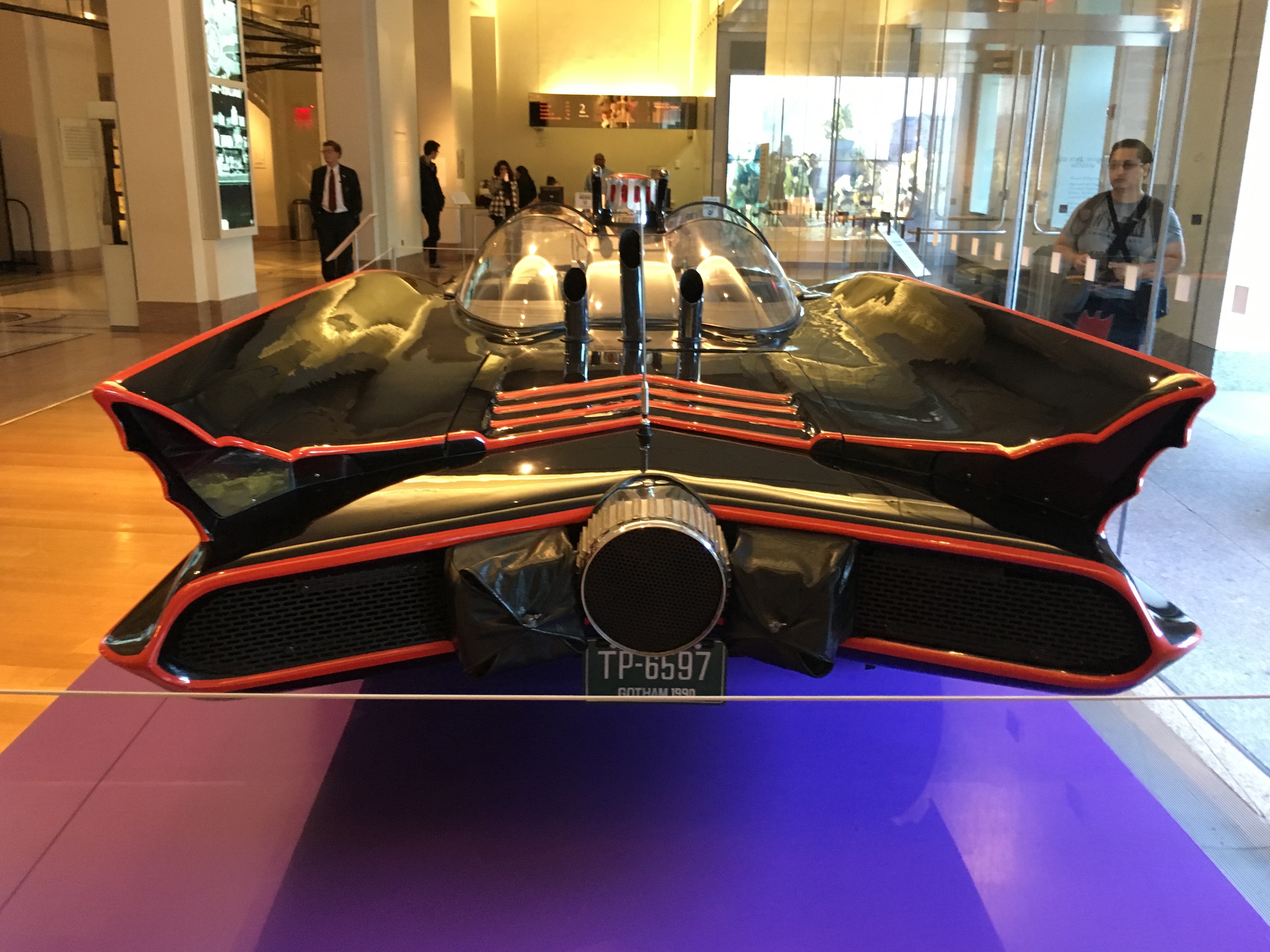 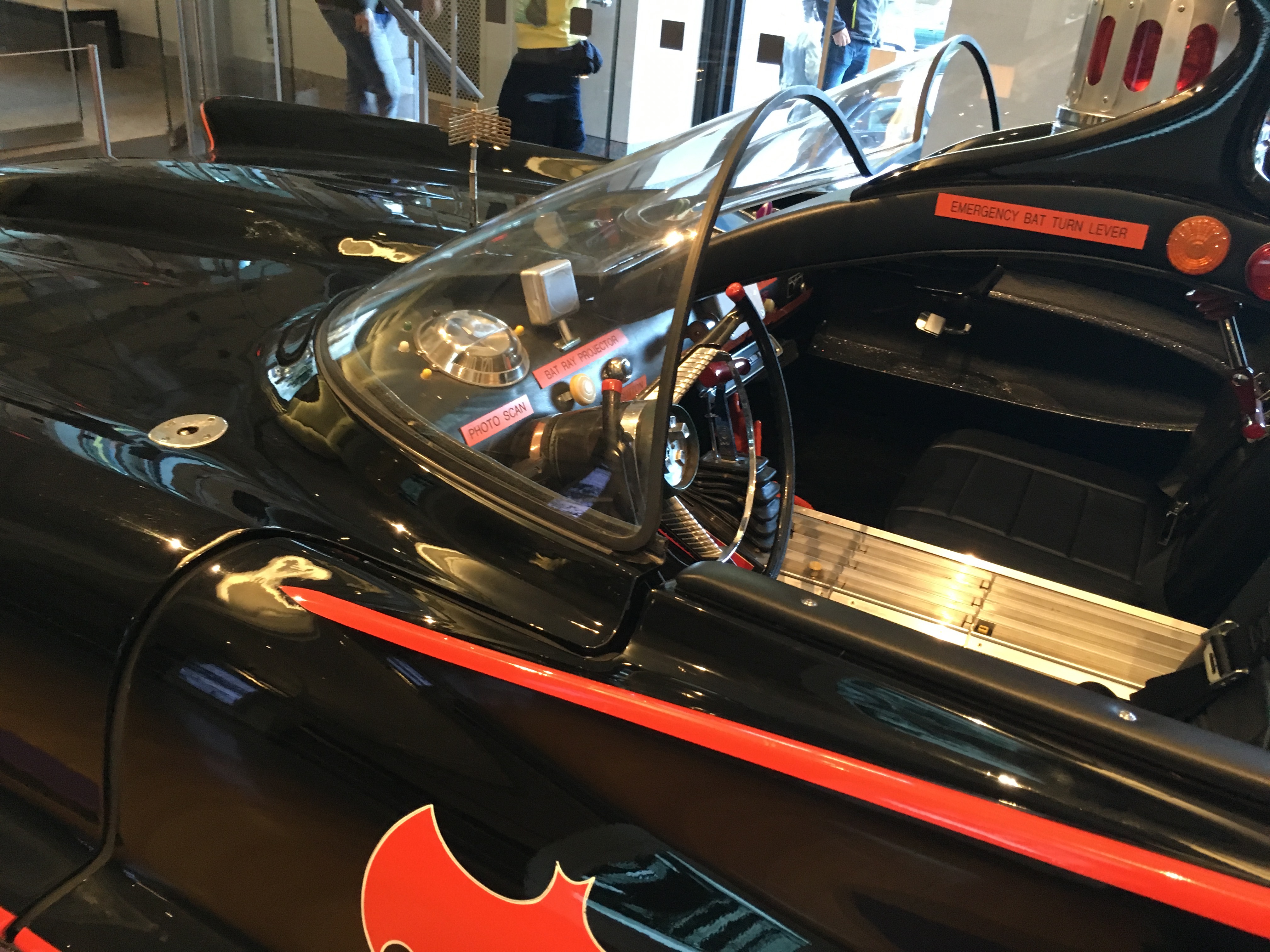 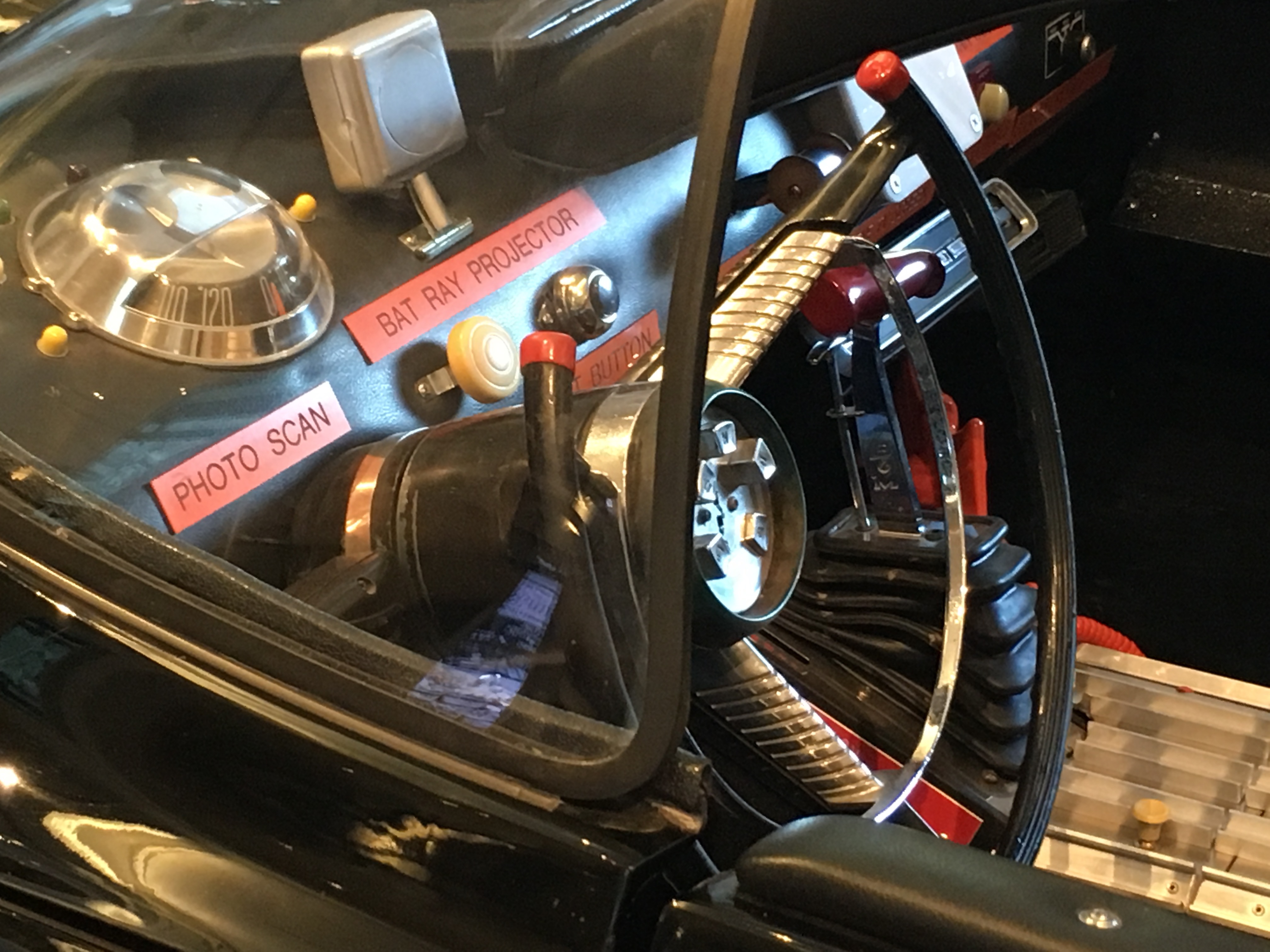 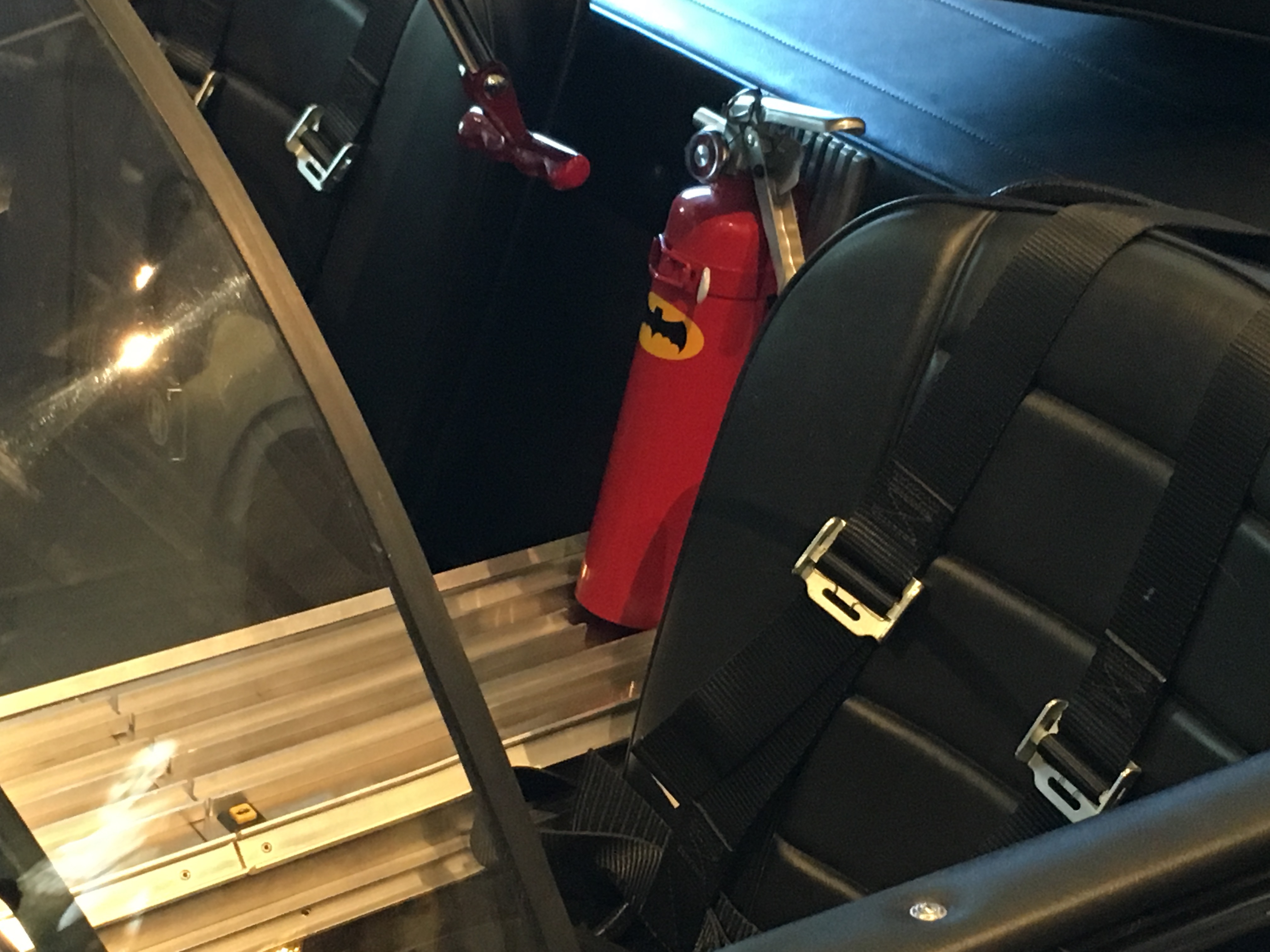