TOYHEM! The fan-fave artist brings us full circle with a fond remembrance of the hero of many masks…

It’s the TOYHEM 2020 finale — and we end where we began: with Captain Action! Joe Jusko kicked off this year’s festivities on Black Friday with his personal recollection of the beloved superhero toy of the 1960s. (Click here.) But everyone’s experience is different — and Jerry Ordway has his own warm memories to share, so it seemed perfect for TOYHEM’s Christmas Day finish, especially since both artists grew up to illustrate CA professionally. 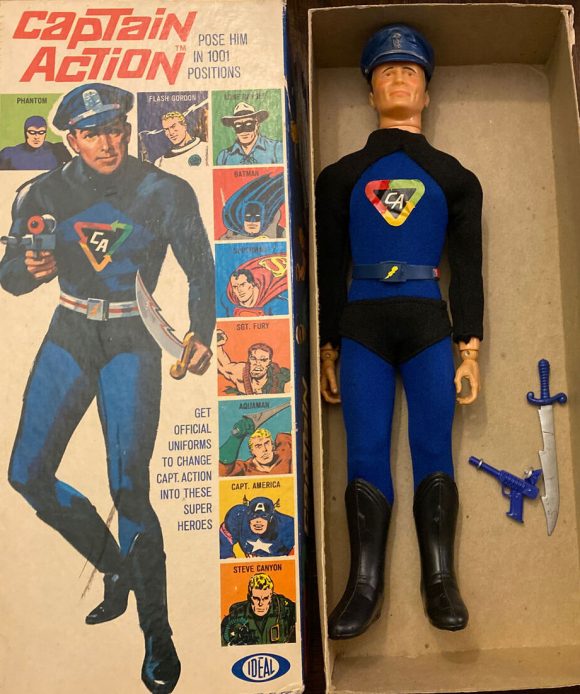 My memories of my discovery of Captain Action, my favorite childhood action figure, are still strong. Events and time compress when you look back on them from so many years, so it feels like Captain Action filled my entire childhood. In reality, I played with my various figures for the years the toys were available, 1966 until maybe 1968.

The Batman TV show was the smash sensation of January 1966, and in that same year, the Marvel Super Heroes came to syndicated television through animation. Both events rocked my world, and cemented my love of superheroes. 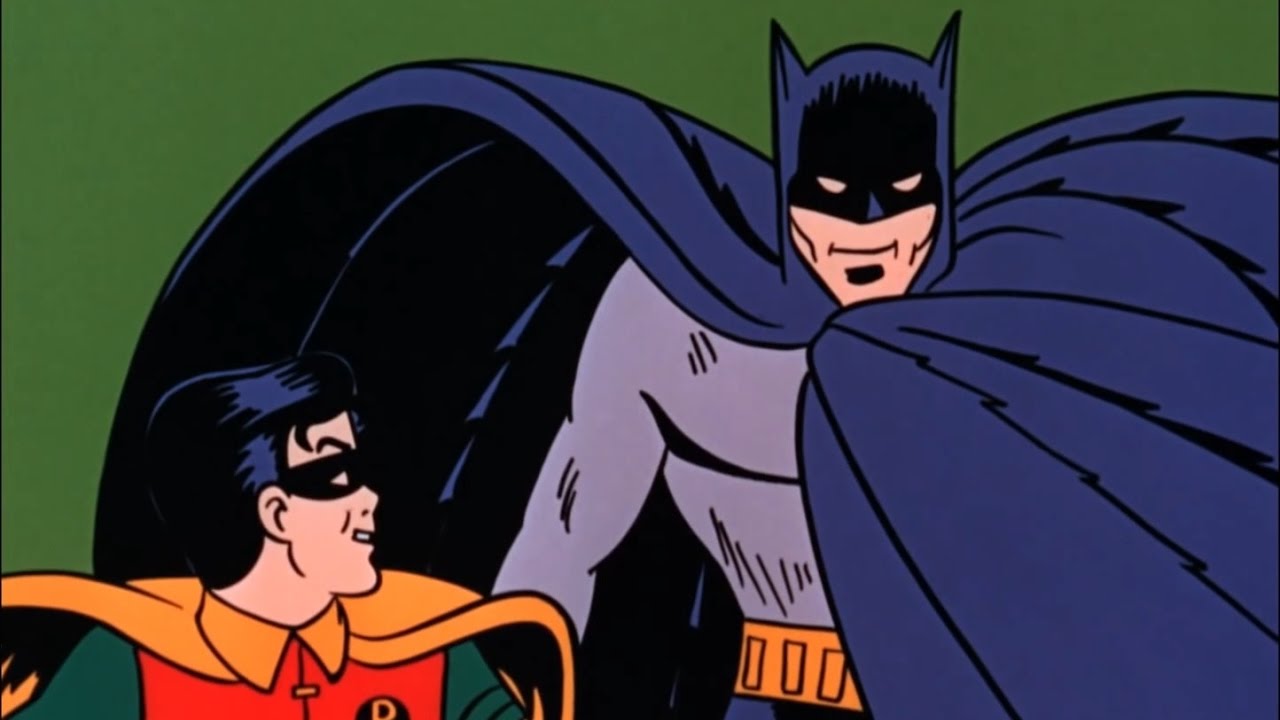 In Milwaukee, where I grew up, there was a business near my aunt’s home called Smith Distributors that produced a catalog of items they sold, including toys, such as Captain Action. You would enter the building, look through their catalog for the items you wanted, write the catalog numbers on a form, give that and payment to the cashier, and then wait.

I watched in anticipation at a conveyor belt snaking through the upper area of the building, to catch a glimpse of my purchases making their way to me! It was truly a weird and wonderful thing, to have to wait for those toy boxes to make their way from the hidden warehouse shelves, on a slow moving conveyor belt, until they stopped in front of me! It only added to the shopping experience.

Running to my aunt’s house, holding the box with the Captain Action figure, and a separate package with a Batman costume, I could hardly wait to open them up and play. Over the next couple of years, I had purchased duplicate Captain Actions and costume sets featuring Superman and Captain America. 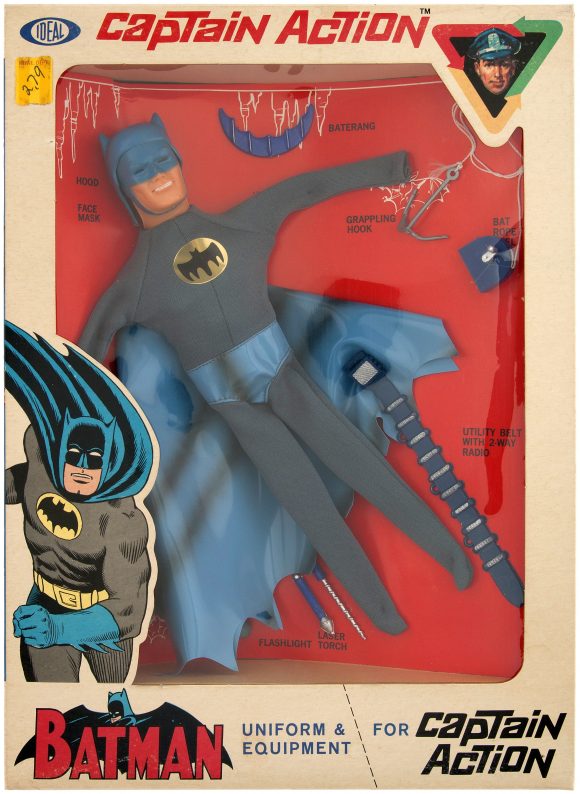 I also realized the outfits fit snugly onto that era’s G.I. Joes, which was helpful. I spent many hours playing with those figures, including making my own costumes to create Marvel’s Avengers line up. I learned to sew (poorly) just for that purpose. I’ve somehow managed to retain the black-haired G.I. Joe I repurposed as Tony Stark. The magic marker mustache is still visible, though faded after so many years. Alas, the costume is long gone. 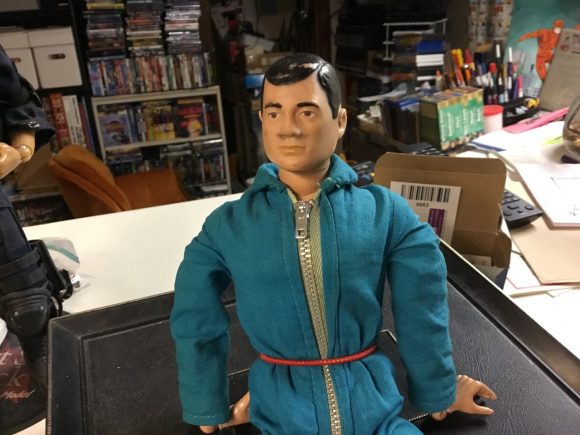 Look closely and you can see Tony’s trademark ‘stache.

I saved money from chores in hopes of finding the Spider-Man costume set for Captain Action, but opportunities for shopping outside of my neighborhood were limited to tagging along with a family friend on a rare excursion to a department store. The one time I found the elusive Spider-Man costume set at a store, with money in hand to actually buy it, the set was damaged. Someone had stolen the mask! I passed on that, and never found one again. My childhood regret! I can’t tell you how many times I agonized over not buying that set missing the mask, over the years.

The story ties into my love of comics in another interesting way — when I discovered that DC published a comic of my favorite toy. I was at my aunt’s house after a Friday night sleepover (she had a color TV!) when my brother Joel showed up after a trip to the downtown newsstand, with a copy of Captain Action. 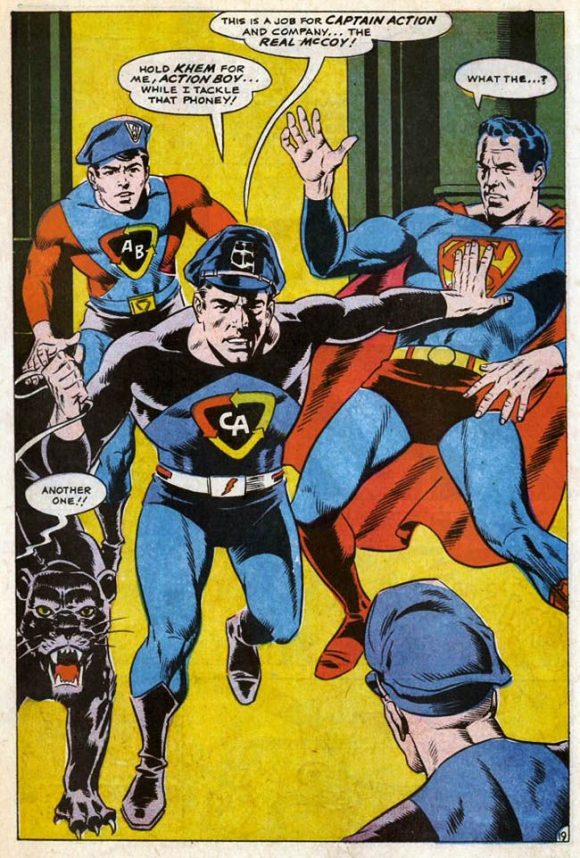 The comic was drawn by Wally Wood, and I became an instant fan of his work. The story developed a persona and premise for CA that was his own, not an excuse to have him dress up as other comics characters. This was apparently a last gasp to try and make him an interesting character in his own right. I loved it, but the series didn’t last long.

After buying the Captain Action figure that came with a parachute, which I tossed into the air over and over again for a week, I lost interest. Trends move fast when you’re a kid.

I eventually gave all of the figures and costumes away to someone who had younger kids. Well, not all of them. I saved my Doctor Evil doll. I drilled a hole in his belly, and his backside, and made a stand out of a metal coat hanger and a base of wood. I posed it, and drew from it for years, like an art model. It was sculpted like a Gil Kane drawing and perfect for creating flying shots. 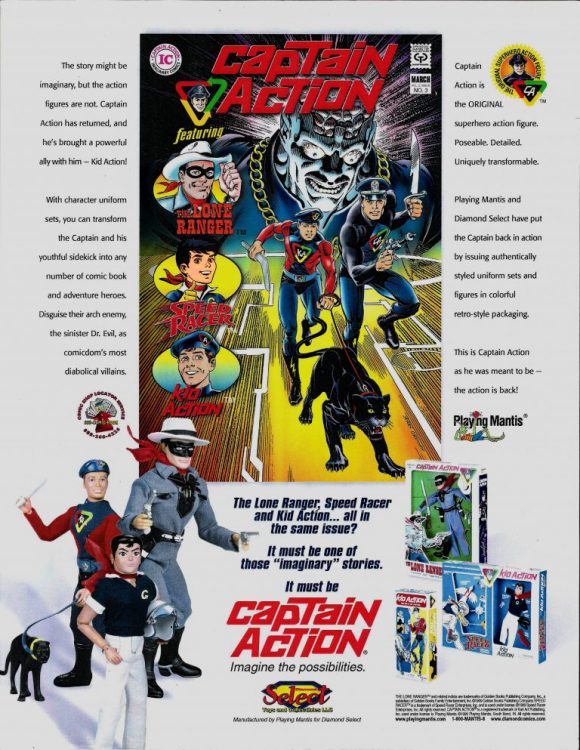 In the late 1990s, I was thrilled to create artwork used for both an advertisement and the back of a box featuring the Captain Action figures for Playing Mantis toys when they relaunched the line. And of course there are many modern Captain Action figures displayed in my studio to this day, including a 2010s-era Round 2 Spider-Man costume set, given to me by a friend.

All is well with the universe, finally.

— The Complete TOYHEM 2021 Index of Features and Columns. Click here.