In case you missed it, we asked 13 top artists to name their favorite Action Comics covers as part of our SUPERMAN WEEK celebration. Click here to check that out. You’ll dig it.

But we wanted to widen the net and ask them to pick a general Superman cover too. And when we say “general,” we mean any other title featuring Superman. The selections are below — and they’re just as terrific. (Some even feature bonuses.)

In the meantime, enjoy these Supercovers:

I’ll never be able to pick just one favorite for either Action or Superman, so I went with two of the books from my shelf of Superman back issues that make me happy every time I shuffle through all of them. Superman #416 is a great read already, but I kept the great cover by Eduardo Barreto visible from my desk for a very long time. It’s a strange one, but beautifully illustrated, and just weird and mysterious enough to really stick with me. 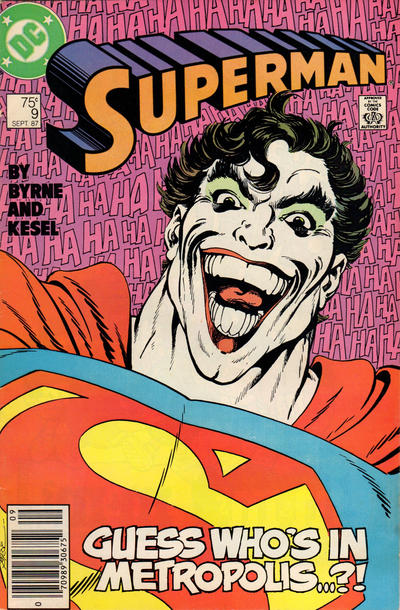 So I chose this one as it was one of the earliest comics I ever read. I was at my friend’s house for one of my first sleep-overs ever and he had a batch of comics. I was flipping through them and this one just caught me and sucked me in. What the hell is the Joker doing in Metropolis and why on Earth would he dare mess with Superman? The cover alone really kind of scared me at first. This beefed up Joker. I remember debating with my friend if it was supposed to be Superman turned into the Joker or if it was the Joker dressed as Superman. You know it’s a good cover if it can cause a debate before you even flip it open to the first page.

The issue itself is a great, fun single-issue read. It was the first book to make me realize that a good villain didn’t have to always match strength with the good guy. A brains-over-brawn situation. And the idea of another superhero’s villain coming over to cause some trouble was really cool to see at that age too. Just a perfect issue (and cover) to help get a young kid into comics. 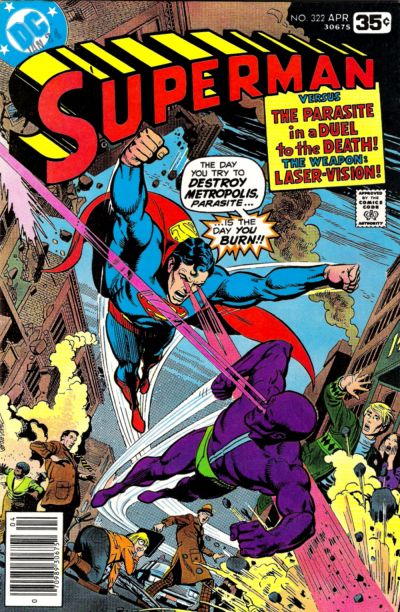 This issue was an early one for me in my Superman reading career. As a kid, I vividly remember being grabbed by this cover. Superman was locked in an intense battle with this powerful purple guy that I would later come to know as the Parasite. Both Superman and the Parasite fly dynamically at the reader. A path of destruction trails behind them. This comic book begged to be read and best of all, the interior delivered on all the action the cover promised. This remained one of my all-time superhero fights and it made the Parasite one of my favorite Superman villains! 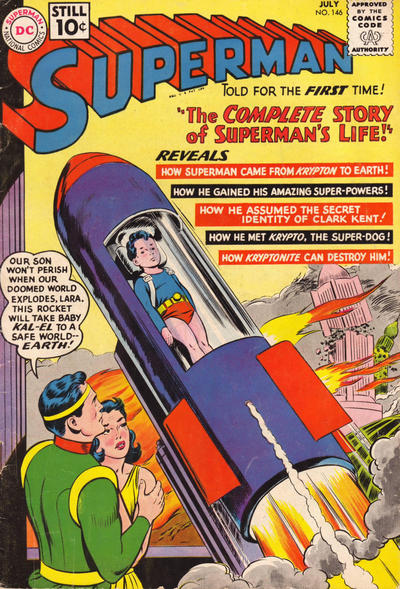 While there are so many, many great Superman covers, I am choosing Superman #146, for sentimental reasons. The image is a great one, and certainly iconic, with strong colors. I encountered this comic as a young child, in a bag of old, DC comics given to me by a family friend. I was maybe 5 years old, and this cover, with a toddler Kal-El, just grabbed me. The story clearly had some impact, but at that age, the cover meant more. I didn’t actually read Superman after that, until the time when Jack Kirby took over Jimmy Olsen, as I was an avowed “Marvel maniac.” The Superman movie in 1978 changed my perception of Superman and I became a fan, late in the game. I’m going to say my runner-up cover is the Neal Adams cover for Superman #233. It’s such an iconic pose, with all the energy Adams was famous for. 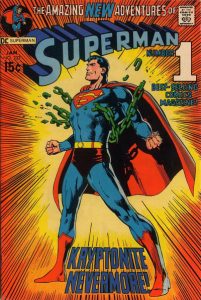 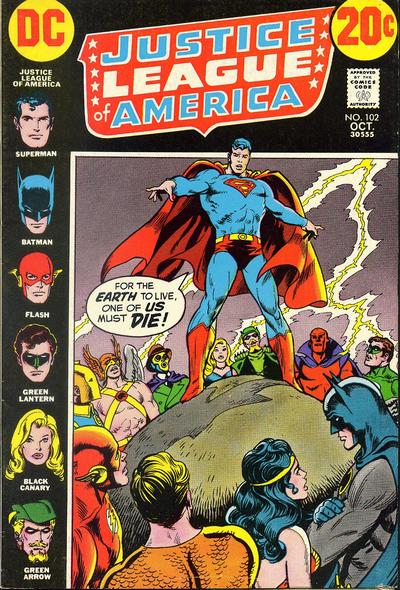 I love this dramatic Nick Cardy cover and it has one of my favorite Superman images (looking a little superior and almost messianic), addressing all the other heroes. You can almost hear the low rumble of thunder approaching. Bonus points for the great Neal Adams face bullets on the side and the beautiful Gaspar Saladino lettering.

Adventures of Superman #441 and Superman: The Man of Steel #37 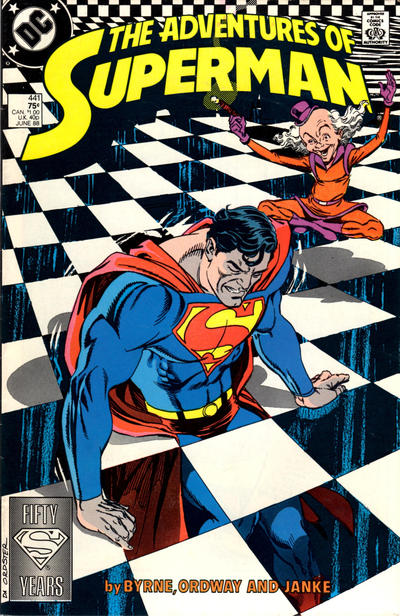 I really loved both Jerry Ordway and Jon Bogdanove’s runs on Superman and these covers always stood out as favorites. Ordway’s mind-bending , three-dimensional approach to the cover design of Adventures of Superman #441, combined with his nailing the unique characters of both Superman and Mr. Mxyzptlk and their relationship to one another, still inspires me as an artist to this day.

Bogdanove’s draftsmanship was always impressive to see month after month on Superman: The Man of Steel, but the sheer audacity of his cover for Issue #37 (inked by Dennis Janke) has always blown me away. The idea of Bog drawing Batman in the various, distinctive styles of so many great artists, and contrasting that with his own trademark style of illustrating Superman, was and is, simply jaw-dropping. 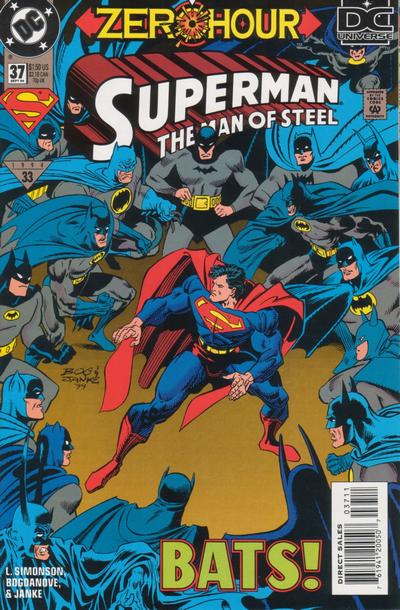 History of the DC Universe Portfolio 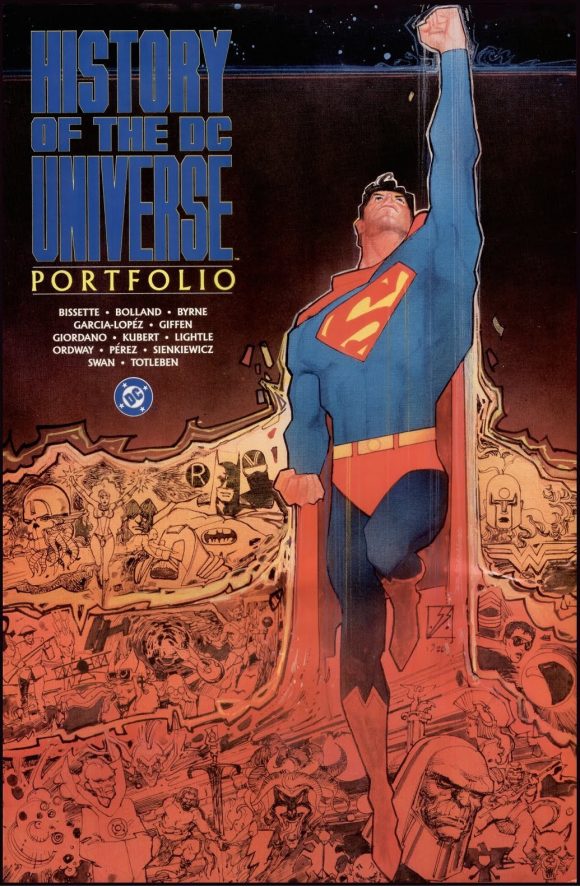 I love Bill Sienkiewicz Superman images, and the cover to this portfolio is incredible.

The character is powerful enough to work with very expressive renditions and still come through in a timeless, iconic way.

And I’ve always loved the design of this Bill Sienkiewicz portfolio piece of Superman. (From the Superman #400 Portfolio.) 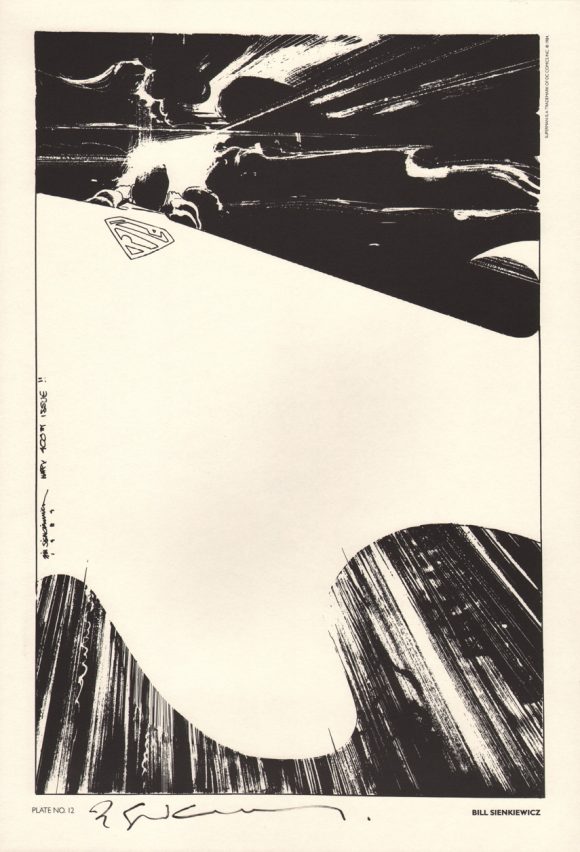 His cape is most of what you see, but all the marks work just right to give all the information you need in such a dynamic way and from a perspective you don’t usually see.

For my all-time favorite general Superman cover, I’m going to resist the urge to name Superman # 149, fronting the uber-classic The Death of Superman!… … and instead turn to another Curt Swan/Stan Kaye minor masterpiece, Superman’s Girl Friend, Lois Lane #29 from 1961. 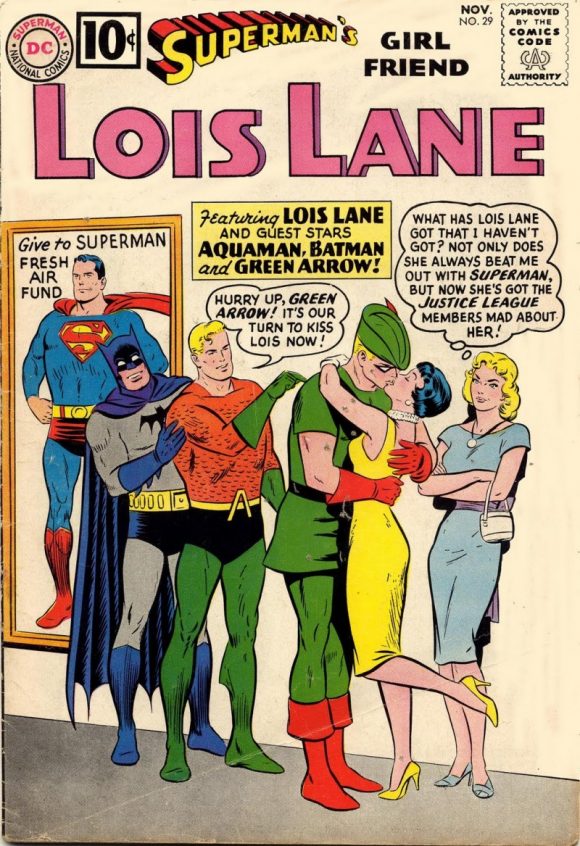 At age 8, I was already dazzled by comics crossovers, so who could forget seeing Green Arrow, Aquaman, and Batman all gathered together (with the lurking presence of the Metropolis Marvel on a nearby life-sized poster), lined up to KISS Superman’s ostensible gal pal, as Lana Lang watches, complete with a catty thought balloon! Mort Weisinger’s stable of Super-titles were, in retrospect, blatantly insane at times, and never more so than here. Covers like this very likely contributed to my slightly off-kilter way of appreciating the silliness of superheroes, while still being able to dig that great Curt Swan artwork! (And hey, I don’t know if this qualified as a #MeToo moment for Lois, but I’m pretty sure Robin wasn’t very happy!)

The Adventures of Superman #451 Jerry Ordway’s run writing and drawing Superman was my favorite. I could pick any of his covers from that time but this one stands out for me. It’s a simple, graphic concept that gets its idea across and makes you want to read the book. Plus, the tone work in the black-and-white “newspaper” images is immediately arresting. Black-and-white images have a deep-seated appeal for me. I’m always drawn to them over color work so the fact that this is a functionally B&W, story-motivated cover makes it great in my book. 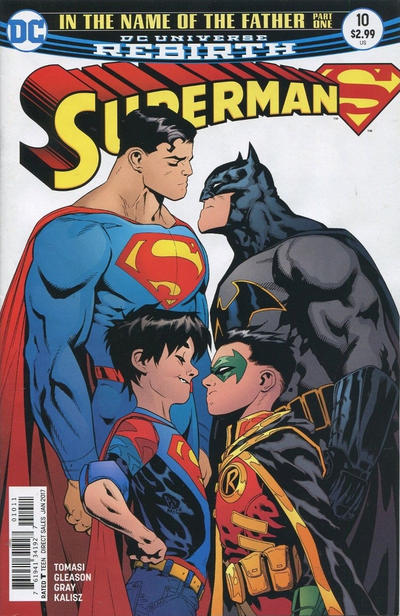 I’m being a bit biased on my favorite Superman cover, but, hey, it turned out AMAZING! Superman #10, pencilled by Patrick Gleason and inked by me, is pretty iconic! The look on all of their faces is nothing short of wonderful! The attitude on this cover is so thick, you could cut it with a knife! But… as many memes have shown, if Superman and Batman’s heads are isolated, it kinda does look like they are getting ready to kiss! PRICELESS!!! The US cover to the first Superman comic I ever owned will always be special! Here’s the British (actually Australian) edition of the same comic. This is my original copy, which I still have! 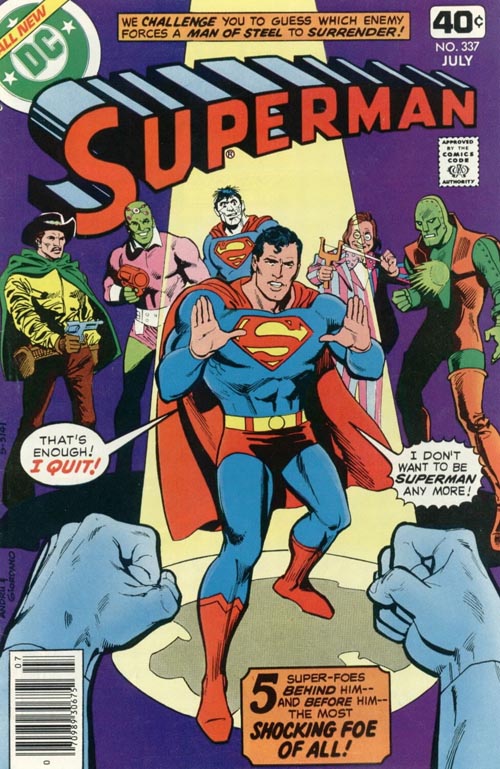 This issue is my all-time favorite cover in all of Superman history! It’s the first time I was introduced to some of the bad guys: Terra-Man! Toy-Man! Metallo! Plus, the evil threat Superman is facing is… HIMSELF? How can this be? Love this issue tremendously! I even paid homage to this cover in my very own Super Powers #5! AW YEAH HISTORY!!! Easily my favorite Superman cover. Proving yet again that I am a victim of nostalgia. It’s easily in the running for the comic I read and re-read the most in my childhood.  The cover promises so much and that 25-cent Giant format delivers!  I super crushed on Lori Lemaris and “the First Supergirl”! This would also be the cover that largely inspired my Action #1000 variant cover.