13 THINGS We Want to See in the New HAWKMAN Series 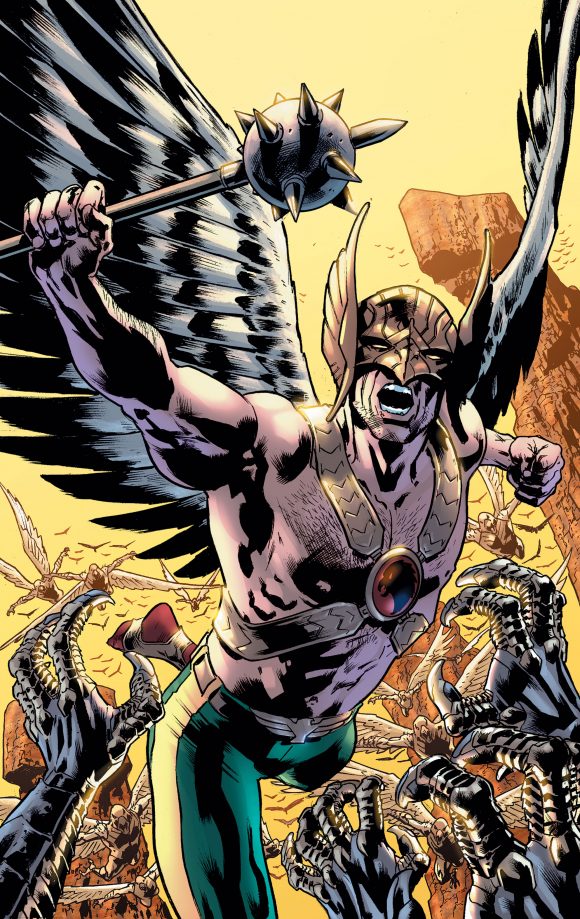 DC the other day announced Hawkman’s return to his own solo title, launching this June. (Click here.) I’m something of a late-awakening Hawkfan, so I asked Hawkmaven Extraordinaire Tim Board, of the popular and vibrant Hawkworld Facebook group to chime in with 13 THINGS WE’D LIKE TO SEE IN THE NEW HAWKMAN SERIES.

After a wait of almost five years, the Winged Wonder will get another opportunity to fly! I was asked by 13th Dimension to list 13 things I would like to see in the new series. There are many but here are the ones I think most fans are interested in:

1. Exploring the New Horizons of Hawkman. Scott Snyder’s Metal series has opened up a whole new world for Hawkman in ways no one could have imagined before the series started. His origin before his original origin (LOL) was revealed, and connections to other heroes have given Hawkman a much deeper and important role in the DC Universe. DC Comics explains on its website: “Spinning out of the events of Dark Nights: Metal and Hawkman: Found, Carter Hall resumes his role as an explorer of the DC Universe’s ancient and unknown. As Hawkman, Hall is on a quest to find out the true nature of his many incarnations throughout time, but he quickly finds out that elements from those past lives want to keep that secret hidden at any cost.” The potential is wide open for Hawkman as he starts his new quest. 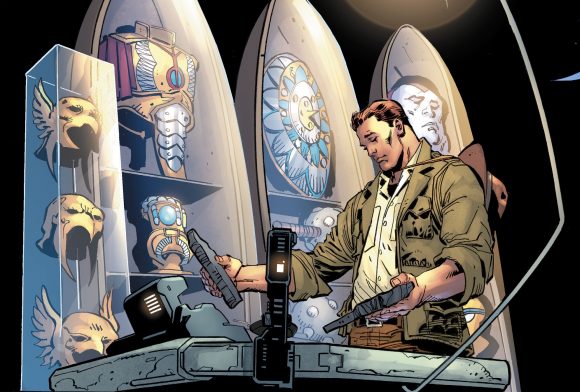 From Dark Days: The Forge

2. Realizing the Power of Hawkman’s Nth Metal. One fascinating revelation in Metal was the connection Nth Metal has to so much else in the DC Universe. As the hero who gets his powers directly from Nth Metal, and with it so prevalent in the DCU, the possibilities are endless. Will Hawkman have new powers? Will he have even greater control of Nth Metal? 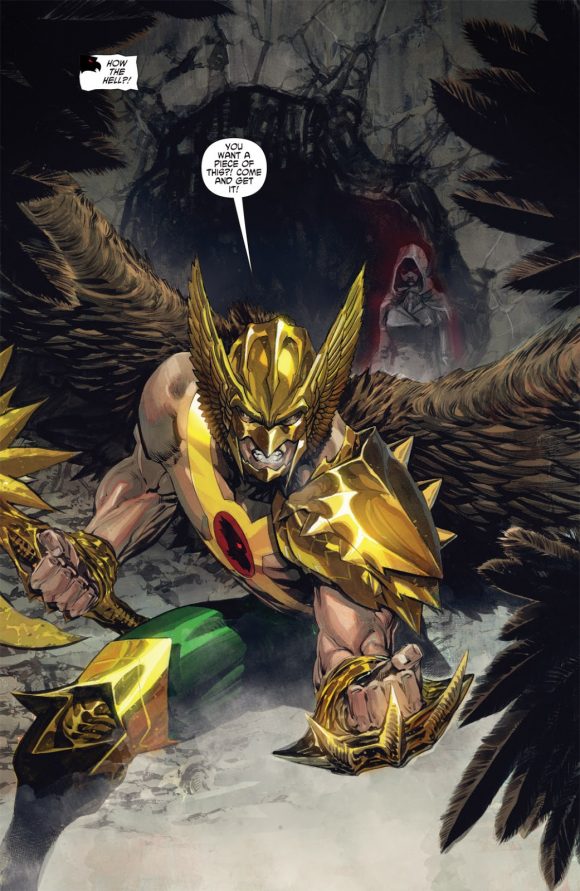 3. A Consistent Creative Team That Lasts at Least 2-3 Years. The team for the book will be writer Robert Venditti (X-O Manowar, Green Lantern), penciller Bryan Hitch (Justice League, The Ultimates), inker Andrew Currie and colorist Alex Sinclair. This is a top-flight team that will be taking over Hawkman. Hitch and Sinclair worked together on Hawkman: Found, which I consider one of the most beautiful Hawkman books ever. If they can bring that art to the new series, it will be amazing. With his experience with X-O Manowar and other characters, there might be no one better than Venditti to take on the character of Hawkman. For the book to be consistent in its storytelling and look, here’s hoping that this team will be able to stick together for 2 or 3 years.

4. The Return of Hawkgirl. One of the things that makes Hawkman special is his relationship with Hawkgirl. While it’s still not clear which Hawkgirl will be in this Hawkman story, or what her role will be, she’s a hero deserving of equal status. A big positive is that she’s going to be in Snyder’s Justice League. Venditti also mentions her in his interview with The Washington Post. “She’s as foundational to the concept really in a lot of ways that Hawkman is,” Venditti said. “Now how we’re going to do that is hopefully going to be set up in a way that will surprise some people. Even when she’s not there on the page, she’s still there in terms of what we’re building and how we’re working towards it.” 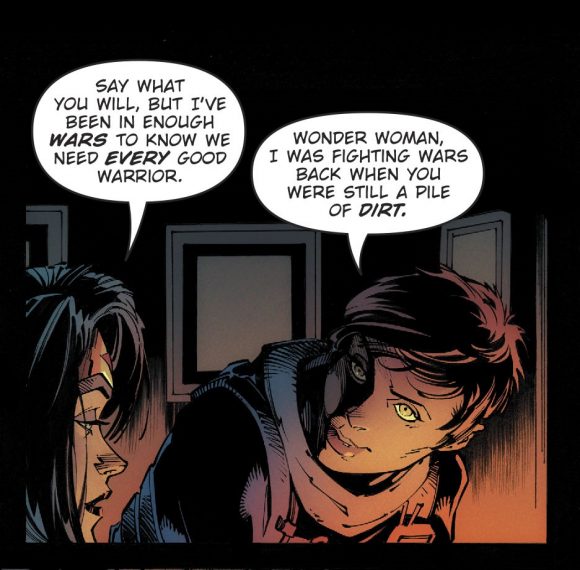 5. Hawkman and Friends. Hawkman’s friendship with the Atom, his sparring with Green Arrow, his adventures with Adam Strange (and many others), are not only entertaining, they show off the great contrasts between the heroes. 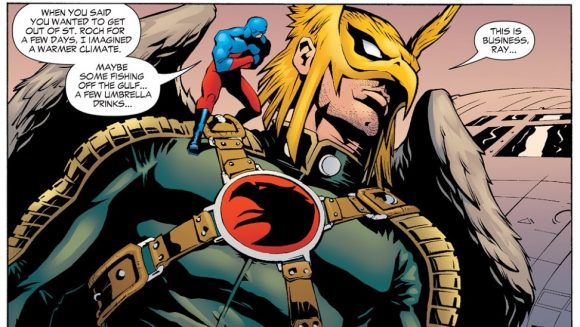 6. Hawkman’s Flight Skills. When Hawkman came on the scene in late 1939, there were not many superheroes who could fly. Zatara was the only DC hero who flew or levitated before Hawkman did. Then Green Lantern showed up, Superman started soaring and Hawkman lost his uniqueness. But as the Winged Warrior, it would be awesome to see focus put on Hawkman’s agility and technique in the sky. While there will always be faster-flying heroes, giving Hawkman unmatched aerial combat abilities would bring back his status as DC’s premier flier. 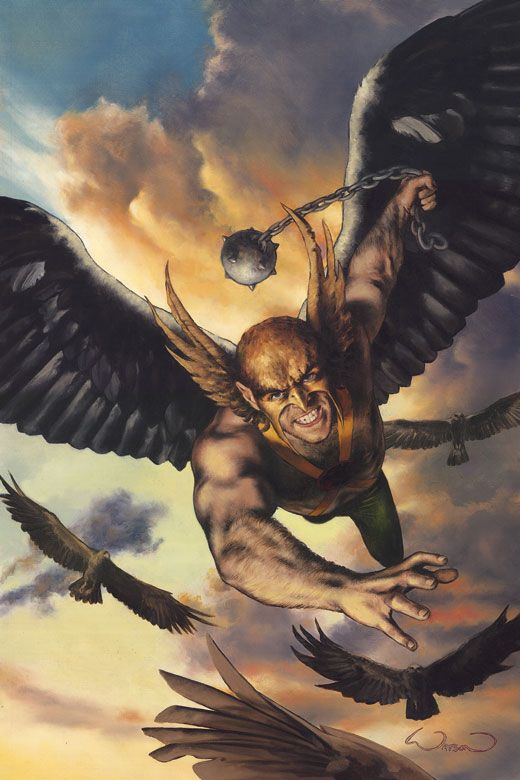 7. The Blackhawks-Challengers of the Unknown Connection. From the Metal series, we now know that Hawkman and Hawkgirl have a connection to the Blackhawks, and Hawkgirl is even their leader as Lady Blackhawk. The Hawks were also working with the Challengers in their quest to find the truth about the Nth Metal. It would be a shame for those connections to disappear after Metal is over.

8. Location, Location, Location. Where will Hawkman be located? Midway City? St. Roch? Or how about Blackhawk Island? In Metal, we discovered that it had been a base of operations for Hawkman for decades. There is even a gold statue erected in his honor. How cool would it be to see Hawkman’s headquarters on a secret island in the South Pacific? Extremely!

9. The Shared History of Hawkman and Batman. This may be the most intriguing storyline to come out of Metal. Apparently, Carter Hall had connections to the Wayne family, seemingly going back centuries. How will this change the dynamic between the two heroes? I would love to be a fly on the wall for a conversation between Carter and Bruce about what happened before and during the Metal event.

10. Thanagar. Even though the current Hawkman is Carter Hall, Katar Hol of Thanagar is not completely gone. When Hawkman came out of the Well of Spirits on Thanagar in 2001, he was changed. He did not have Carter’s blond hair or Katar’s black hair. He had brown hair and the physiology of a 26-year-old man. The two Hawkmen were merged together and Carter was the principal presence, but he still had Katar’s memories. He is basically half Thanagarian and half-terran. Venditti has so much material to work with: Carter’s past lives through reincarnation, his connection to Thanagar, and his present life on Earth. I hope the Thanagarian part of him comes up regularly. It is too good to toss aside and be forgotten. 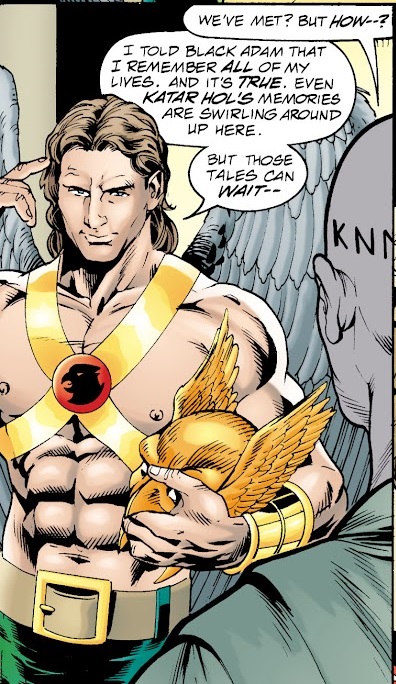 11. The Rogues Gallery. Hawkman has one of the most interesting collections of villains in the DC Universe: Gentleman Ghost, Shadow Thief, Lion-Mane, Byth, Onimar Synn, Hath-Set, the Manhawks and many more. Let’s see some more of them! 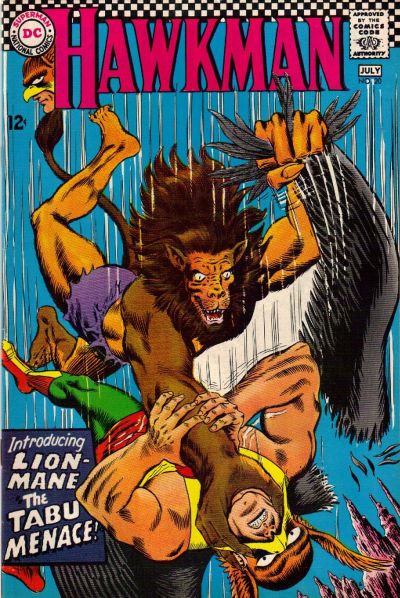 12. More Emphasis on Life Than Death. When Hawkman came back in 2001, reincarnation and death became a focal part of his character. He was constantly haunted by his past deaths, and always expecting to die and reincarnate again. The stories were interesting, but they became all that Hawkman was about until finally, the snarkier fans started thinking of his main superpower as Dying Repeatedly. For the last decade, writers have delivered that theme ad nauseum, killing Hawkman no less than 10 times. A Hawkman series where Hawkman doesn’t die could work to correct that image. It would be nice to see Hawkman more positive about life and focused on the one he is living than always brooding about his past deaths. 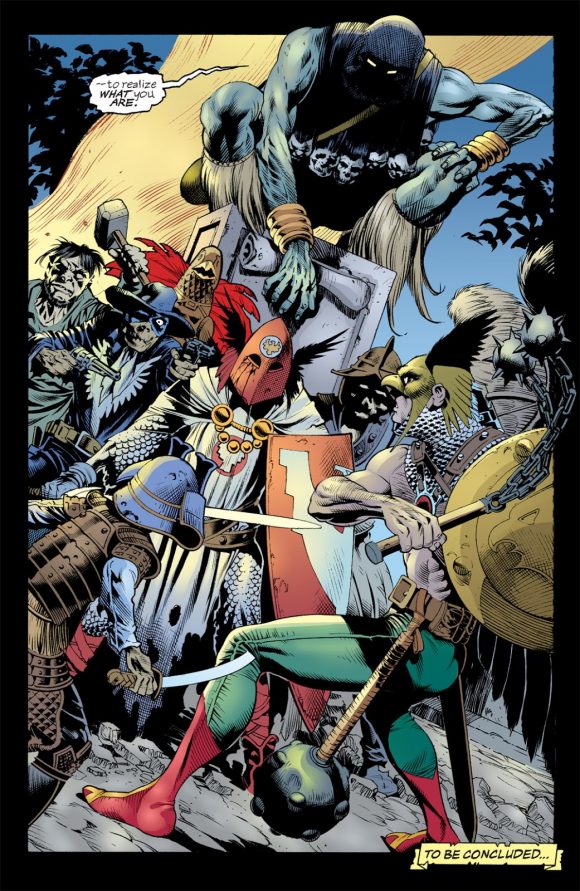 13. Streamlining Hawkman and Hawkgirl. For most comic book fans, Hawkman can be a confusing character to follow. He needs to be simplified. Geoff Johns did a masterful job in clearing up some of the confusion. Although a new origin seems be in the works, it will only hurt Hawkman if the story is made any more confusing than it already is. Here’s hoping Venditti can figure out a way to streamline Hawkman and Hawkgirl and make them less confusing … if that’s possible! 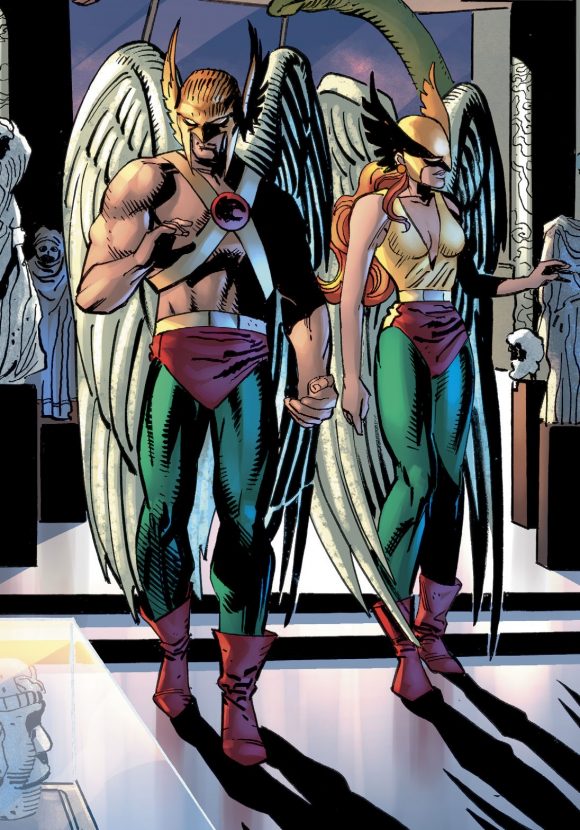 It’s been a long time coming, but we finally get a regular Hawkman series for the first time since The Savage Hawkman was canceled after 21 issues in 2013. The longest running Hawkman series has been 49 issues (66 if you’re counting the Hawkgirl issues), so here’s hoping that history will be made, and we will be celebrating Issue #100 in September 2026!