13 THINGS to Love About CAPTAIN ACTION #4

You know the best part of a vacation? It’s that point where you’ve been doing it long enough so you’re in a groove, but not so close to the end where you have to worry about wrapping it all up… and heading for home. DC’s Captain Action #4 is the epitome of that ideal vacation sweet spot.

In the fourth outing of this epically short series, Captain Action faces off, once again, against his hated foe Dr. Evil. And like Khan and Kirk in Star Trek II, the two don’t actually meet. But don’t worry; writer-artist Gil Kane is able to ratchet up the tension (Sixties style) to create an over-the-top adventure that’s gorgeous to behold and memorable in so many ways.

Here’re the 13 things that I love most about the penultimate issue of DC’s Captain Action series:

1. The Pink Lady. No, in this issue Captain Action doesn’t sip Pink Lady cocktails at Happy Hour. Instead, Gil Kane starts the action off with a stunning cover — as an oversized, slightly menacing pink lady is beckoning the heroes. Captain Action holds back Action Boy, who wants to embrace the woman. She seems to be his mother! There’s lots of wipsy clouds swirling around. But Kane made an interesting design choice — the only black trap lines are used on the heroes. This simple design choice gives an already impactful cover (it’s both urgent and confounding) an eerie, off-kilter feel. 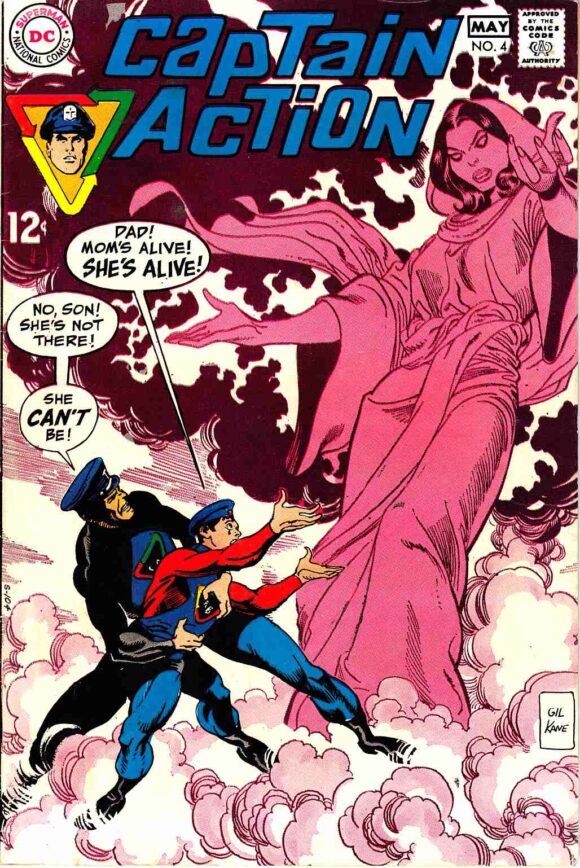 2. The Dr. Evil Show. This issue has so many pages focused on Dr. Evil. In fact, there are nine pages that feature Dr. Evil exclusively, without our heroes. Way back in the Silver Age, it seemed to me that only Dr. Doom, and maybe once in a while Lex Luthor, got storytelling treatment like that. Not bad for Dr. Evil’s second comic appearance. 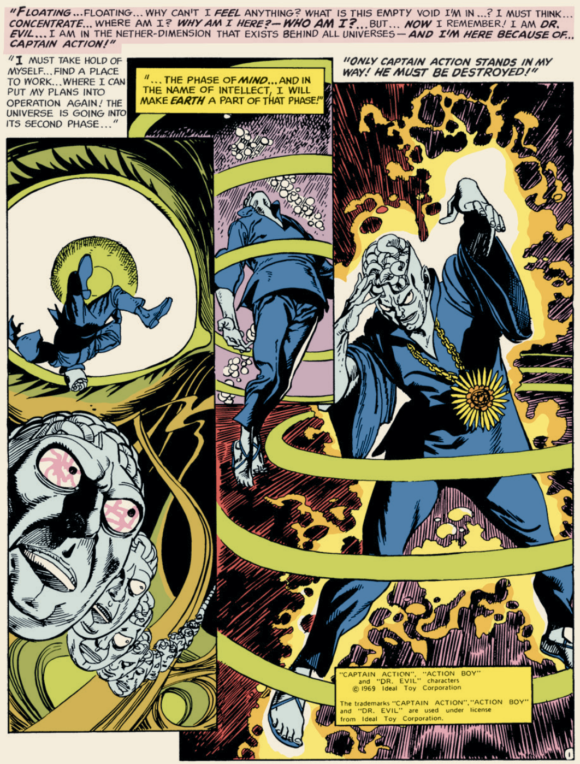 3. A Planetful of Evil. The story starts out as Dr. Evil “feels his consciousness drawn, inexorably, toward the planet Alpha Centura.” We learn this is a dying world… but still inhabited. And would you believe, it’s inhabited by a race of aliens who all look exactly like Dr. Evil? Goofy? Maybe, but it works for me.

4. Mount Crumpit: Dr. Evil Style. Just as the Grinch who stole Christmas has his mountainous perch, Dr. Evil spends a few scenes shaking his fists in rage at storm clouds while poised on his own craggy roost. And when illustrated by Gil Kane, it’s breathtaking! 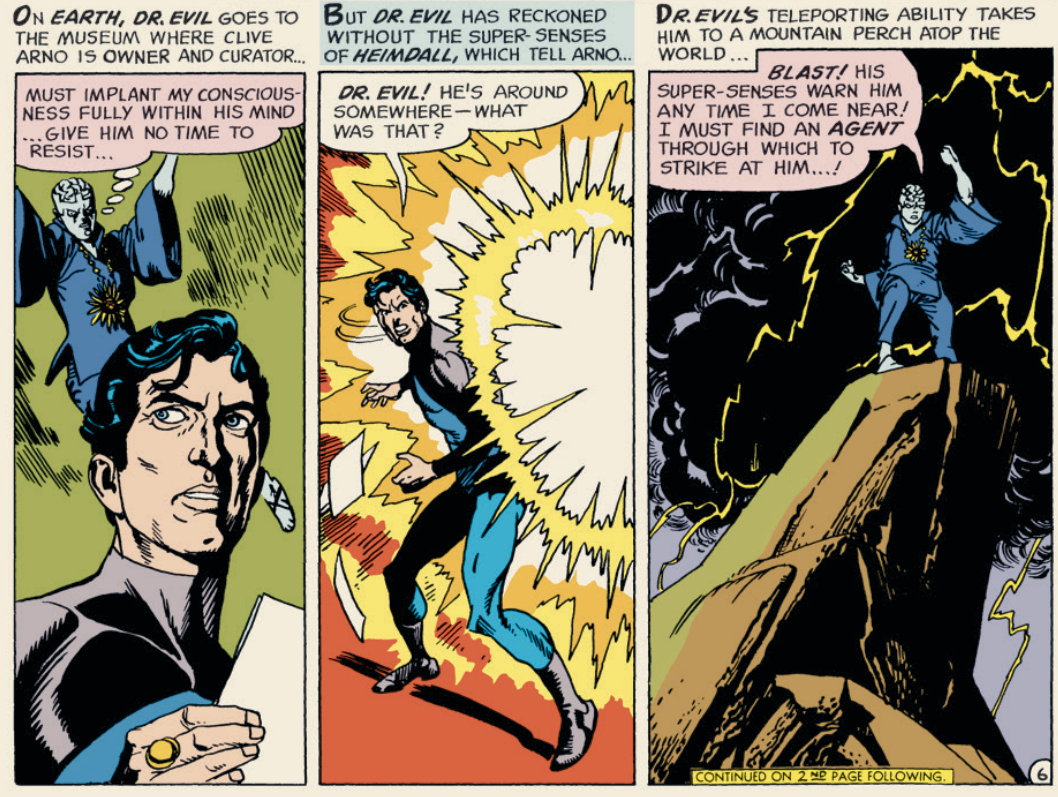 5. Inking: Kane on Kane. Issue #4 provides one brief look for fans to enjoy Kane inks on Kane pencils. Wally Wood had provided his luscious inks for the previous and subsequent issues, but Issue #4 is all-Kane. (Well… maybe not all-Kane; it’s lettered by Ben Oda, of course.) It clicks artistically. The urgency of Kane’s vision seems to shine through, unhampered by another artist’s inks. 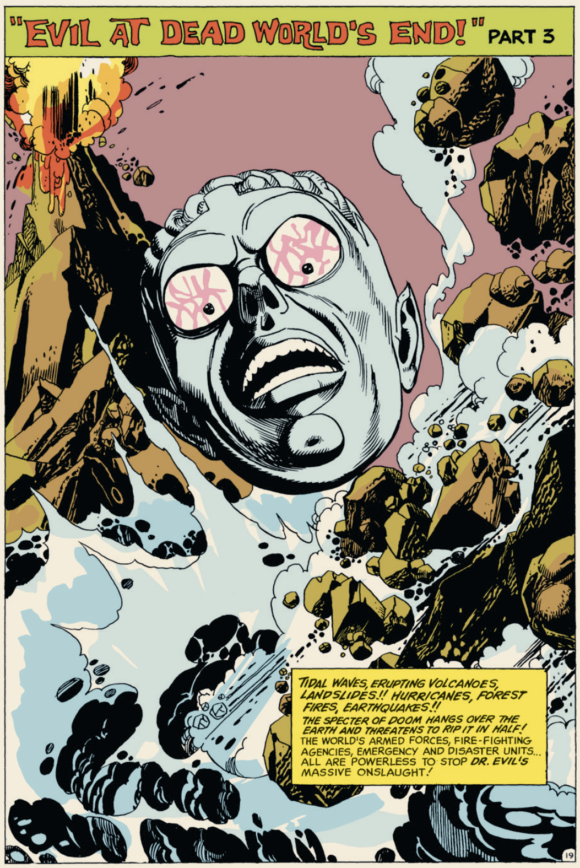 6. Three Alpha Centuran Monsters Running Amok. This almost sounds like it should be the Yuletide lyric that comes after “Two Turtle Doves.” In actuality, this issue provided a fantastic opportunity for Gil Kane to render scary monsters to fight Captain Action and Action Boy. These monsters, a Devourodon, a Blastoid and a Cyanide-Crawler actually came from Captain Action’s lab. Dr. Evil had converted his foe’s lab machinery into a receiver for monster teleportation from Alpha Centura. And was there an easier way to set this up? Sure, there was!  But as a reader, it’s fine to just go with the flow. 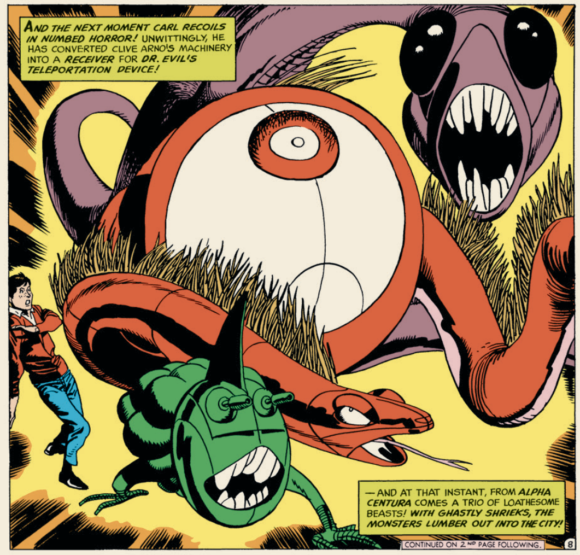 7. Zombify Your Daughter. By finding the “frozen energy after essence” of his deceased daughter (also Captain Action’s wife), Dr. Evil is able to “perform the most difficult feat” of his existence. He reanimates her! After pausing for just one panel to react like any normal father, he shifts back into business mode to use the reanimated Kathryn as a tool against his archenemy, Captain Action. It’s kind of the worst way of twisting the concept of “Take Your Daughter to Work Day” that one could ever imagine. 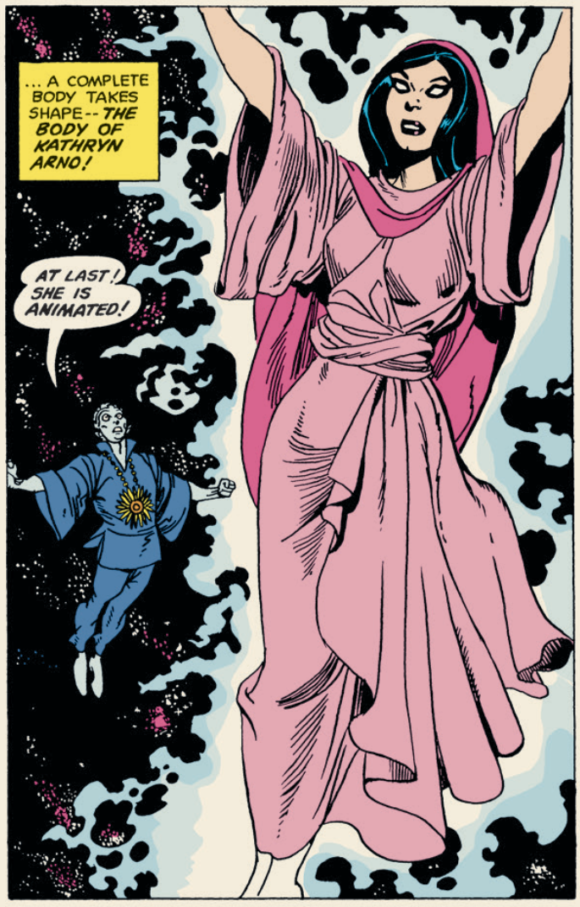 8. Signature Kane Floating Heads. This issue has several full-pagers and they are all gorgeous. But since Mark Waid covered that as one of the 13 THINGS he loved on the first day of CAPTAIN ACTION WEEK here (he reviewed Issue #1 illustrated by Wally Wood), I’ll take a different tack. Let me instead praise the numerous Gil Kane “floating head panels” in this issue. There are quite a few (including an all-Dr. Evil floating head panel) but this signature element from Kane’s artistic arsenal never gets old. In fact, Kane packs so much emotion and individuality into each characters’ face that it’s a treat each time he employs it. 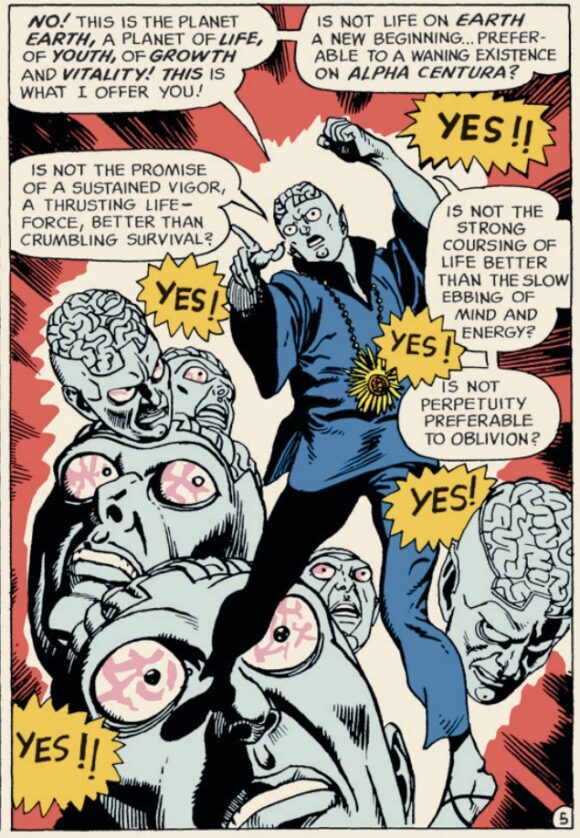 9. A Jumbotron in the Action Cave. Perhaps wishing he had pursued a job working in Times Square, Captain Action has installed a HUUUUUGE viewscreen in his Action Cave. It must have been guaranteed to give the viewer a neck ache. But by the story’s end, it IS used to show a fantastic Dr. Evil-on-that-craggy-rock scene, so it’s kind of worth it. And when it’s all drawn by Gil Kane, who can blame the hero for splurging on a personal Jumbotron?

10. An Emotional Exchange. Gil Kane wrote himself an engaging scene to draw: Captain Action, in his guise as everyman Clive Arno, is tempted by his true love, his deceased wife Kathryn. There’s a lot of confusion, longing and sadness packed into just a few pages. (NOTE: In fact, I also married a woman named Katherine. Coincidence? Destiny? Something foretold by Dr. Evil? Is it because I read this comic at a young age? I will let you decide!) 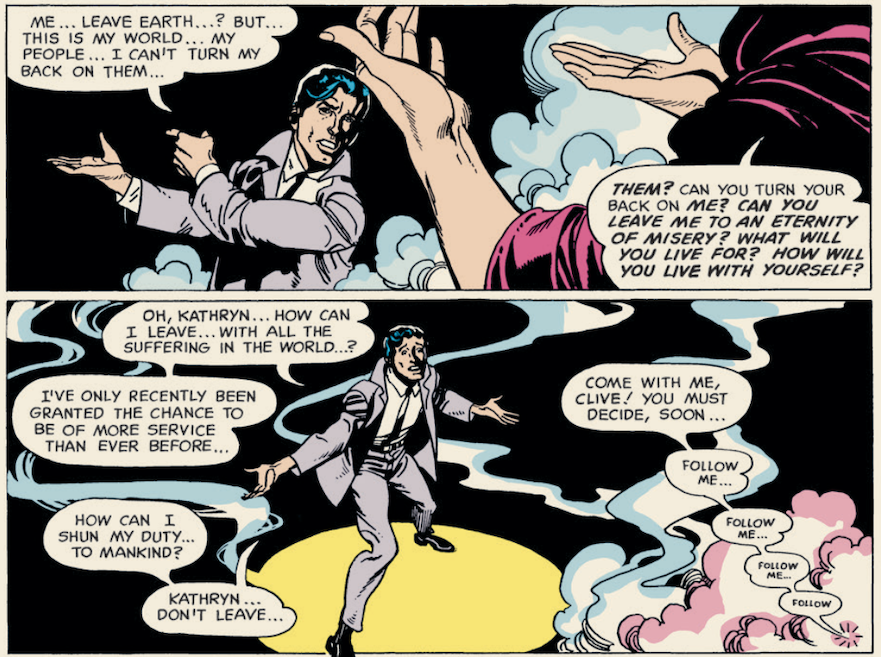 11. Missed It by That Much! You know that famous meme of Batman slapping Robin? Well, page 10’s final panel just missed internet fame as Action Boy slaps his dad, Captain Action, back into reality. On the next page, Carl quickly apologizes, and Captain Action is thankful. “Yes, thanks. Thanks, Carl. I see now… it was Dr. Evil’s doing all along. It had to be!” And then he gives his sidekick a hug. Awww… 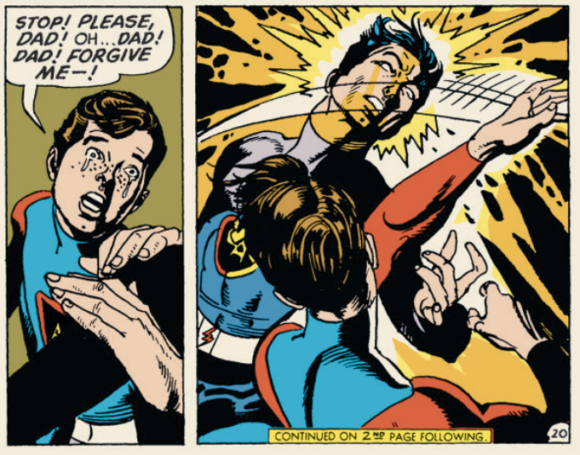 12. “This is the End.” Gil Kane takes Earth to edge of oblivion in this one. So much so, that a national newscaster signs off his broadcast and says goodbye to the world. Of course, this is followed up by the comic book equivalent of “never mind”, but still. 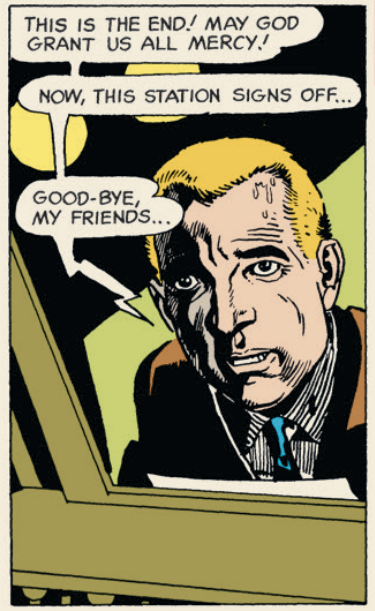 13. A Future Pro Writes In. I always love to read old letter columns. The best ones are when you spot a letterhack who would later turn pro! Carl Gafford would become a colorist, and an editor “when he grew up.” In this issue, his letter offers insights into Captain Action’s comic debut. It’s amazing how quickly Julie Schwartz and Gil Kane changed the comic from the initial two issues, and that’s reflected in the response to Gafford’s letter by the “Editor” (presumably Julie Schwartz). And this is such a neat time capsule that we’ve included this letter column in the Captain Action: The Classic Collection hardcover, by the way. 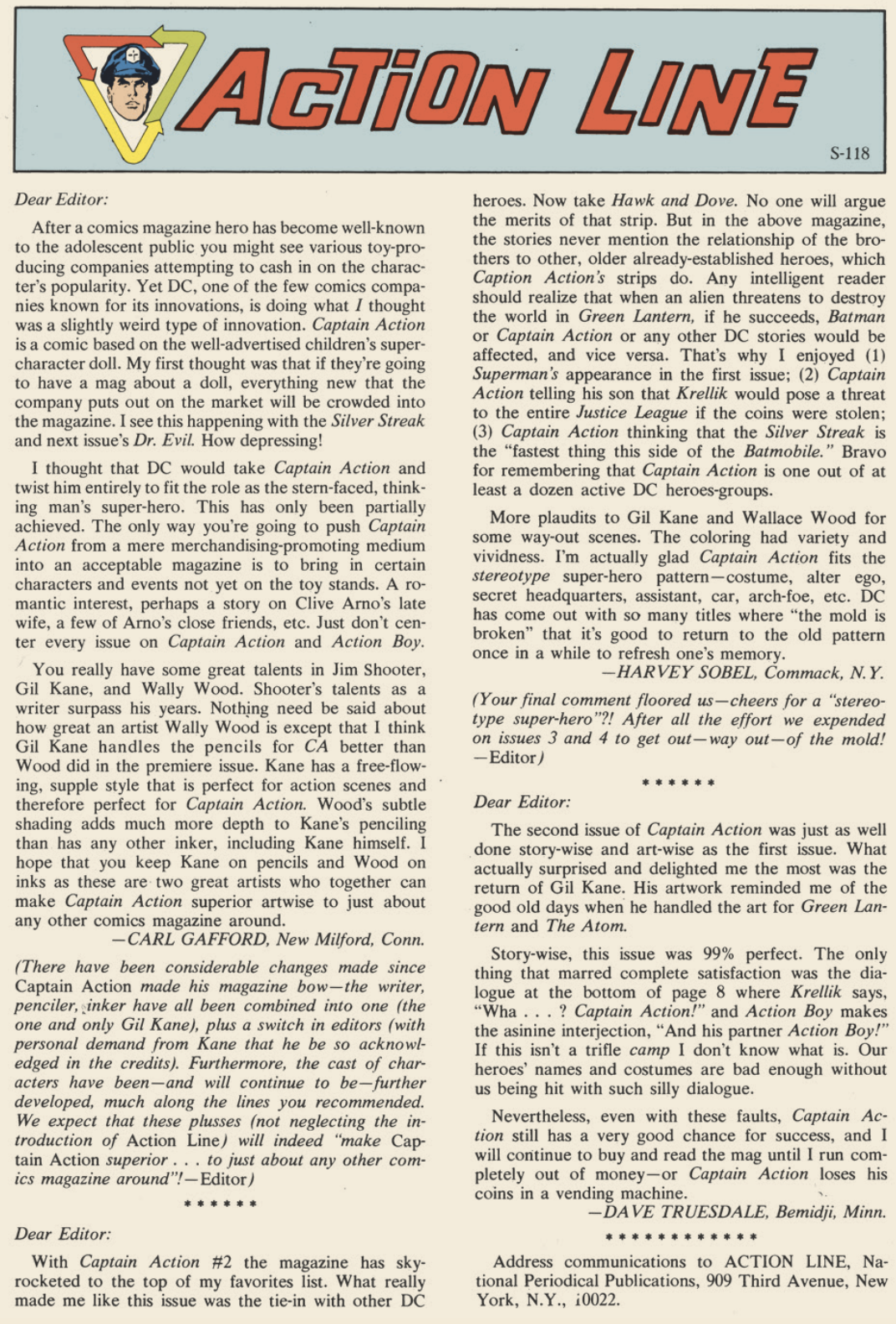 What an issue! Reading this one is like running a 10K, after you’ve already spent 60 minutes on the Peloton!

NEXT: 12 REASONS TO LOVE (AND 1 REASON TO HATE) CAPTAIN ACTION #5, by MICHAEL EURY. Click here.

As a “retropreneur,” ED CATTO co-founded Captain Action Enterprises. He continues to embrace comics and pop culture in his writing for Pop Culture Squad, Back Issue Magazine, the Overstreet Comic Book Price Guide and ComicMix (and sometimes 13th Dimension too). More recently, Ed has launched Agendae Group and joined the faculty of Ithaca College’s School of Business. Between consulting, writing, teaching and drawing, Ed continues to work very hard to whittle down the teetering tower of comics on his nightstand.