They say I wrote the book on Captain Action.

While that’s true (2002 and 2009 editions of Captain Action: The Original Super-Hero Action Figure, both from TwoMorrows Publishing), when it comes to Captain Action, I don’t see myself as an “expert”… nor am I a super-collector. 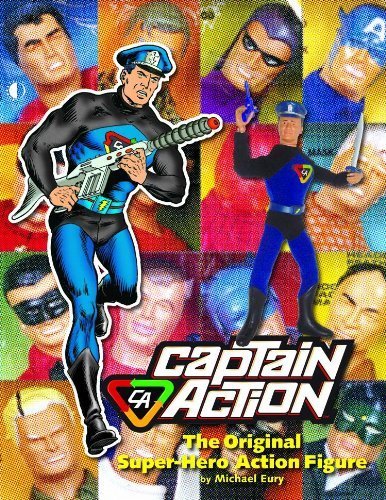 I’m just a guy who was a kid in 1966 when Batmania changed the world, and when Captain Action premiered on toy shelves and appeared under Christmas trees. Two years later, I jumped out of my skin with excitement when DC Comics released Captain Action #1, and fidgeted for the dreadful two months that crept by between issues.

The lightning sword has been passed to me to chronicle the 13 things I love most about Captain Action #5. Although I’m a cheerful, optimistic guy, I have to instead offer 12 things I love and 1 thing I hate about DC’s final issue. Let’s start with the positive:

1. The Cover Art. You probably don’t need me to tell you that Gil Kane was a master illustrator. And this cover shows why. Kane depicts a larger-than-life super-villain as… well, larger than life, symbolically lording over our hero and his sidekick. What comics-loving kid wouldn’t plop down 12 cents to find out what happens next?

2. The Cover’s Foreboding Message. “Destroy Captain Action… and America is ours for the taking!” The series’ previous four covers depicted personal struggles for Cap. But this one, with its super-sized villain swarmed by his rabid disciples (brandishing “Down with Captain Action” protest signs, no less!), upped the ante for Captain Action, placing the fate of a nation in his hands. 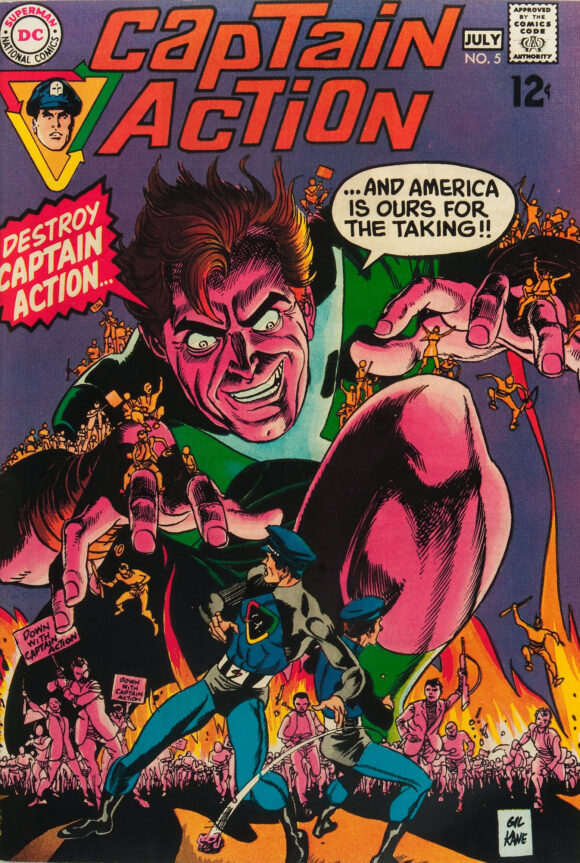 3. Gil Kane, Writer. For the third consecutive issue, Gil Kane writes as well as pencils Captain Action. “While my syntax wasn’t great, my ideas were good,” Kane told me in an interview for my Captain Action book. It’s to editor Julius Schwartz’s credit that he gave Kane this room to stretch. 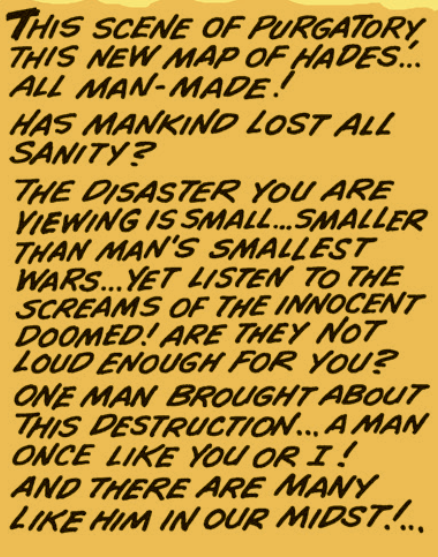 4. Death and Destruction… On Page 1! The issue opens with a horrific splash page depicting hapless victims flailing about amid an explosion. As the page turns, there are casualties among the wounded. Such graphic fare was uncharacteristic for DC Comics in 1969, an era where gimmicky plots and storybook premises ruled, and proved a precursor to a wave of more mature storytelling that would soon emerge in the medium. 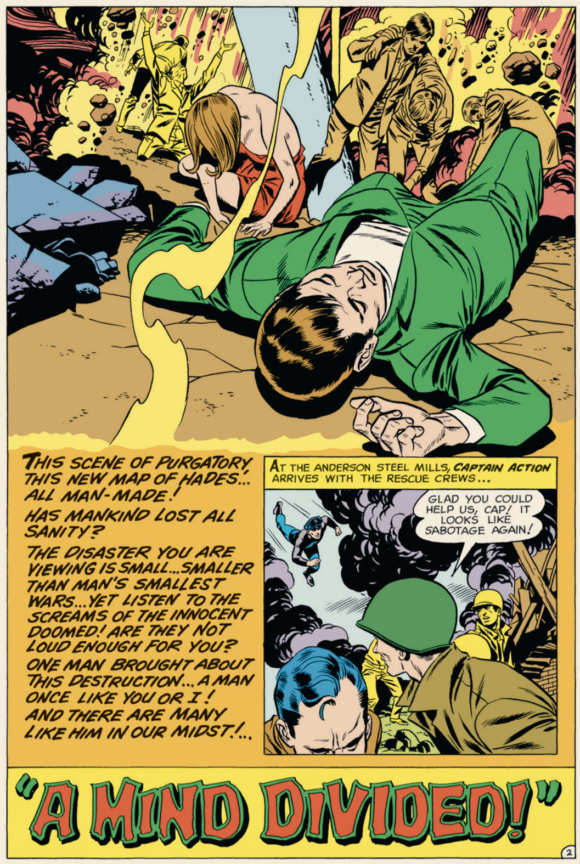 5. “A Power-Mad Fanatic — a Poisonous Hate-Monger.” That’s how Captain Action describes the villain responsible for the opening carnage, identifying his foe by name at the bottom of Page 3 while vowing, “Matthew Blackwell! He must be stopped!” 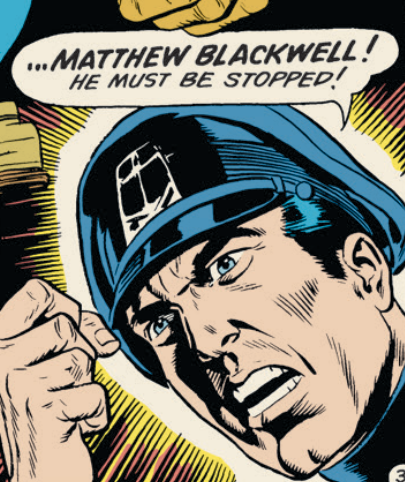 6. Silver Tongue, Black Heart. Matthew Blackwell is a persuasive demagogue whose inflammatory orations intoxicate the masses into obedience. Violence, xenophobia and anti-authority hostility ensue, all by agitated “honest Americans.” To call Kane’s story prescient of recent events would be a tremendous understatement. 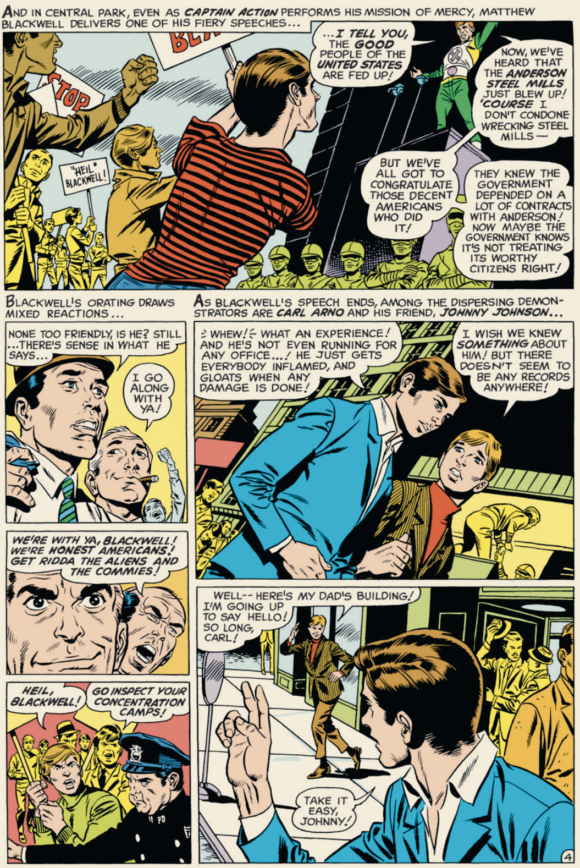 7. No Norman Osborn, He. Conversely, Eugene Johnson, a crusading magazine publisher mired in depression since the passing of his wife, is the epitome of kindness when it comes to his teenage son, Johnny. 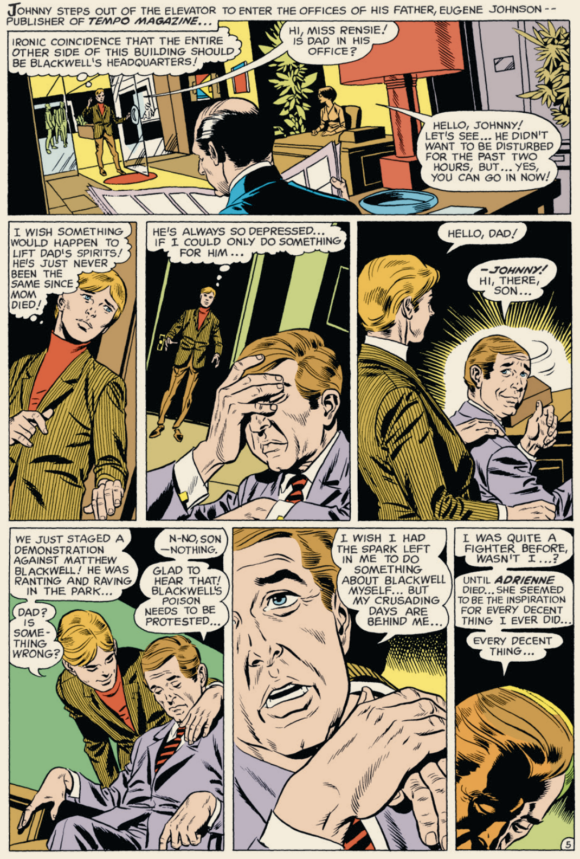 But a flip of the page later…

8. …The Mask Comes Off! (Spoiler alert!) Instead of the Dr. Tracy face mask that concealed the blue skin and exposed brain of Dr. Evil in the previous two issues, Johnson is revealed — in a deliciously over-the-top transformation panel rife with maniacal cackles and up-shots — to be Blackwell, the very villain he, as a journalist, editorializes against. 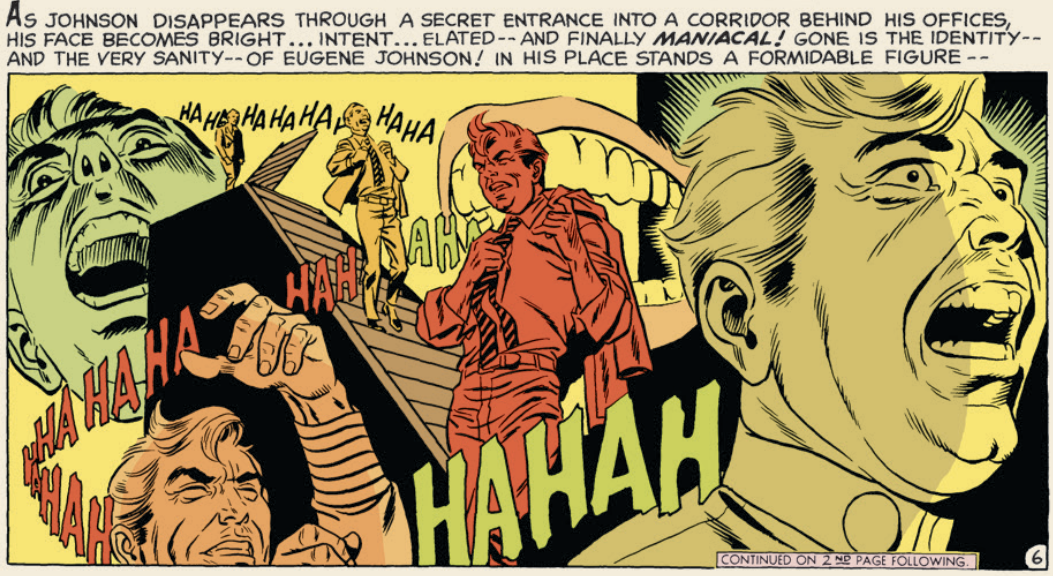 9. Action Boy Fights Alone! When Blackwell’s Gestapo knocks heads with a group of anti-Blackwell demonstrators, the observing Carl Arno gets a chance to spring into action as Action Boy — sans Captain Action, his papa — chanting his (and Cap’s) “Let justice be done!” battle cry as he storms into the fray.

10. A Fragile Mind. What little remaining rationality keeps Blackwell from going over the deep end snaps on Page 20, when a ghastly (but not unexpected) turn of events plunges him into insanity… conveyed by Kane via his hallmark floating heads on an astounding splash page. Classic Gil Kane! 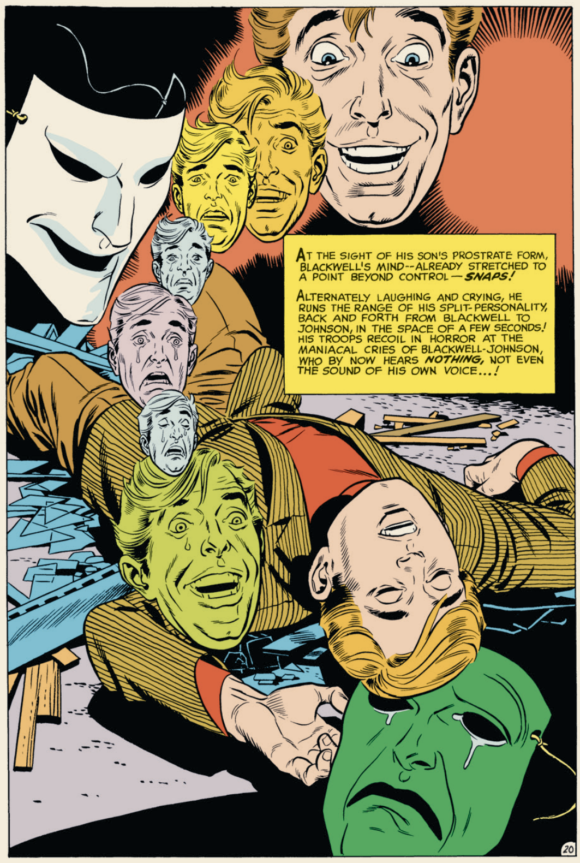 11. “An Avenging Juggernaut.” During the climax, Kane and inker Wally Wood let Captain Action cut loose with his god-infused super-abilities as our hero mops up the chaos sparked by Blackwell’s costumed paramilitary soldiers. Cap flies around with Green Lantern–like grace and speed, but Page 22’s final panel, with the hero super-heaving a massive piece of machinery, is the issue’s money shot. 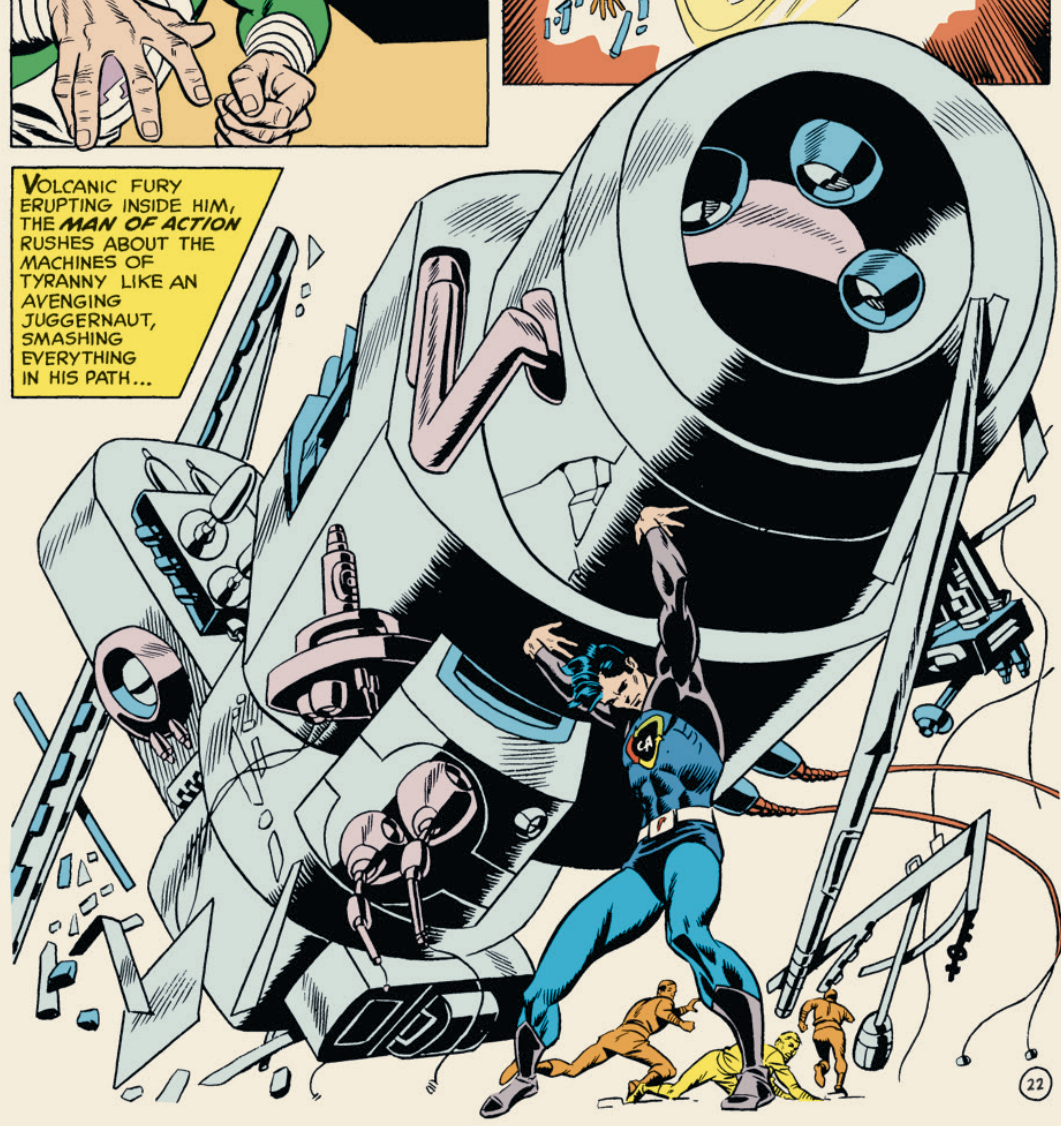 12. The Return of Wally Wood’s Inks. Ed Catto rightly touted Kane’s embellishment of his own pencils in Issue #4. But with Issue #5, Wood — who helped launch this toy tie-in comic book — returns to ink Kane. While Wood’s luscious lines often overpowered the pencils underneath, Kane’s angular Captain Action layouts and figures are simply too vigorous to be lost under Wood’s brush. A dynamic duo! 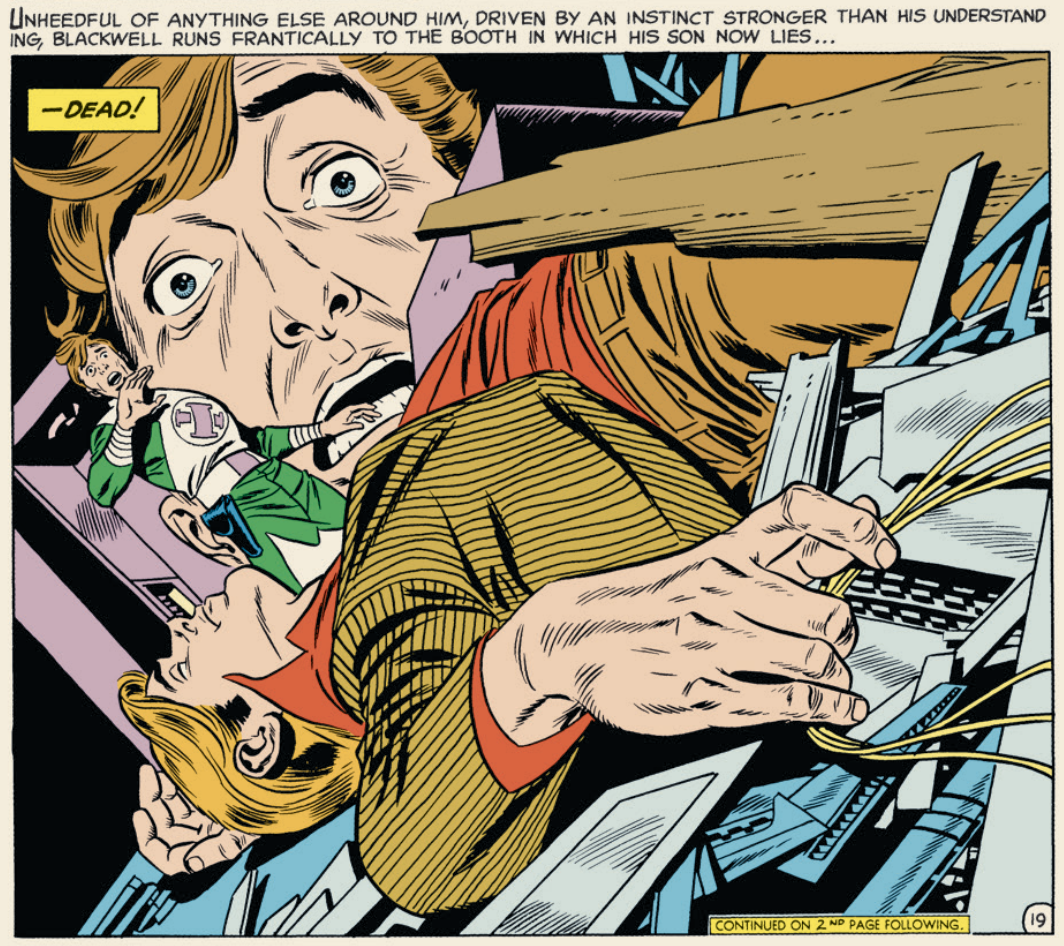 And the one thing I HATE about Captain Action #5:

1. It Was the End! As a 10-year-old, I couldn’t wait for Captain Action #6. Two months after #5, I flipped through newsstand shelves and spinner racks, in a valiant search for the sixth issue. After weeks of dashed hopes, I finally gave up. Since I saw no DC house ads or “Direct Currents” news items about Captain Action #6, I accepted the heartbreaking news that the comic was no more. (I was similarly devastated a year or so earlier when Metamorpho was abruptly cancelled after the release of its 17th issue.) In those pre-internet, pre-Diamond Previews days, how was a kid like me supposed to know that DC’s licensing deal with Ideal Toys was for five issues of Captain Action, with a continuance occurring if sales warranted? But as wonderful as these five issues were, the series’ start came two years into Captain Action’s toy run, too late to fully exploit the super-hero mania that accompanied Cap’s launch. And thus, DC’s Captain Action came to a crashing, and crushing, halt.

While my inner child can imagine what might have happened in later DC issues — Action Boy donning his silver space suit, Captain Action and Action Boy meeting Batman and Robin, a Dr. Evil/Brainiac partnership, the use of Cap’s Ideal Toys accessories (imagine Gil Kane drawing Cap in his Directional Communicator!) — the saga was over with Issue #5.

We can only dream of what might have come next, but at least we have IDW’s deluxe reprint of Captain Action #1-5 to allow us to revisit some of DC’s best and most inventive comics of the late Silver Age! Let justice be done… and let’s go to where the action is!