The co-creator of the superhero was born 108 years ago… 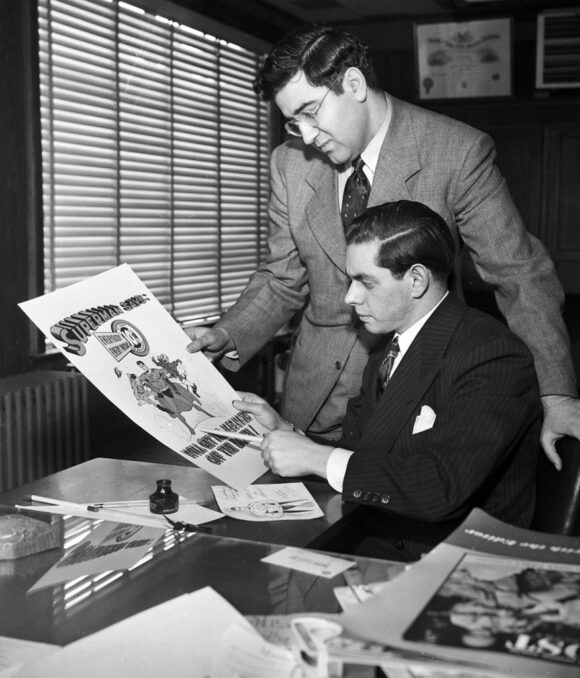 We all know that Jerry Siegel (born Oct. 17, 1914), created Superman with Joe Shuster. What may be less well known is that though Siegel stopped working for DC in the late ’40s, he returned in 1959 to write several more years of stories featuring Superman, Supergirl, Lois Lane and others of the Superman family.

My favorite comics in my youth (the early ’60s) were those with Superman, and I recently discovered that many of the stories I liked best from that time period were written by Siegel. He wrote humorous tales very well, but he also had the ability to tug at your heart strings with a serious story. Below is a mixture of both, a selection of my favorite Jerry Siegel Superman stories from the Silver Age, plus three Golden Age delights that DC reprinted in their 80-Page Giant and Famous 1st Edition series during the 1960s and 1970s.

Action Comics #1 (June 1938). The first Superman story pulled no punches when it came to the subject of wife-beating. Art by Joe Shuster. (Reprinted in Famous 1st Edition #C-26, 1974.) 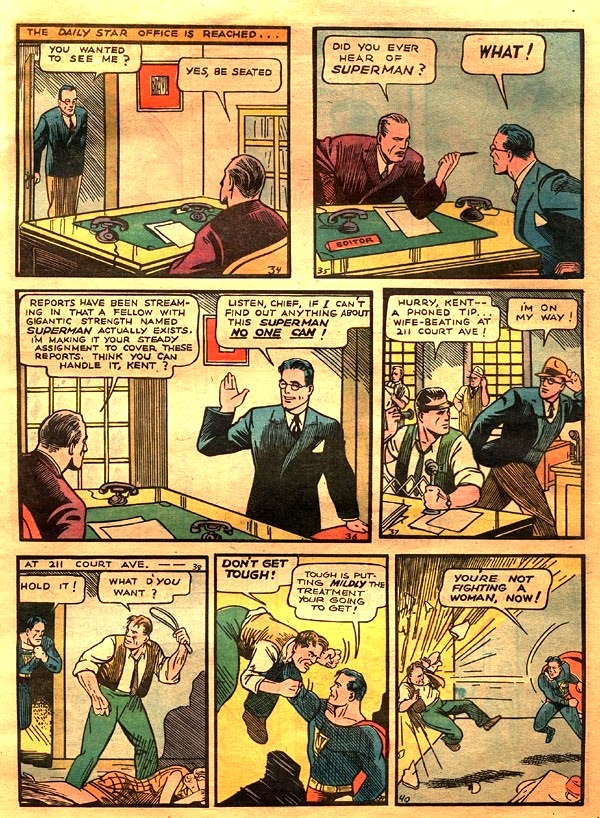 “Superman, Matinee Idol” – Superman #19 (Nov.-Dec. 1942). Lois goes with Clark to a movie theater to see one of the new Paramount Superman cartoons. When he realizes there are times onscreen when his secret identity could be revealed, Clark creates diversions to stop Lois from seeing the animated Clark change to Superman. Pencil layouts by Shuster, finished pencils by Ed Dobrotka, inks by John Sikela. (Reprinted in Superman #183, January 1966.) 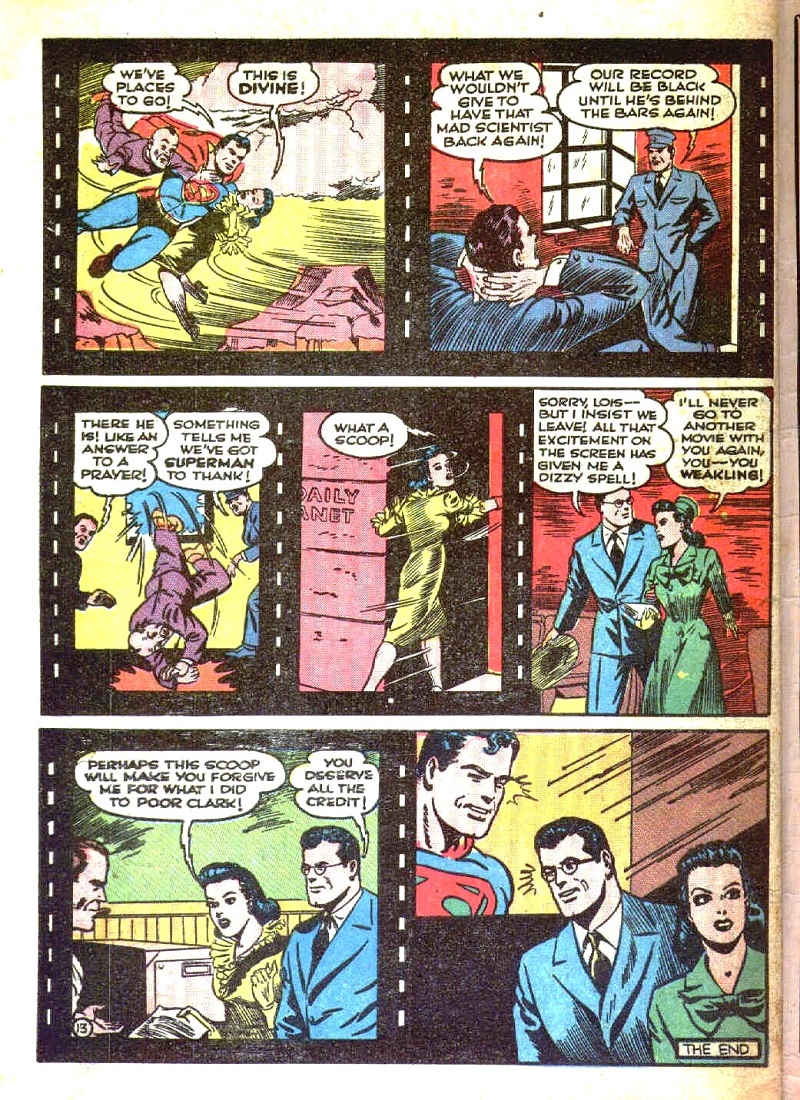 “The Mysterious Mr. Mxyztplk!” – Superman #30 (Sept.-Oct. 1944). This tale introduces Mr. Mxyztplk, the magical imp from the Fifth Dimension. At the time, his name was spelled “Mxyztplk” but years later changed to “Mxyzptlk” (so much easier to pronounce). Pencils possibly by Shuster and/or Ira Yarbrough, with inks by Yarbrough. (Reprinted in Superman #183, January 1966.) 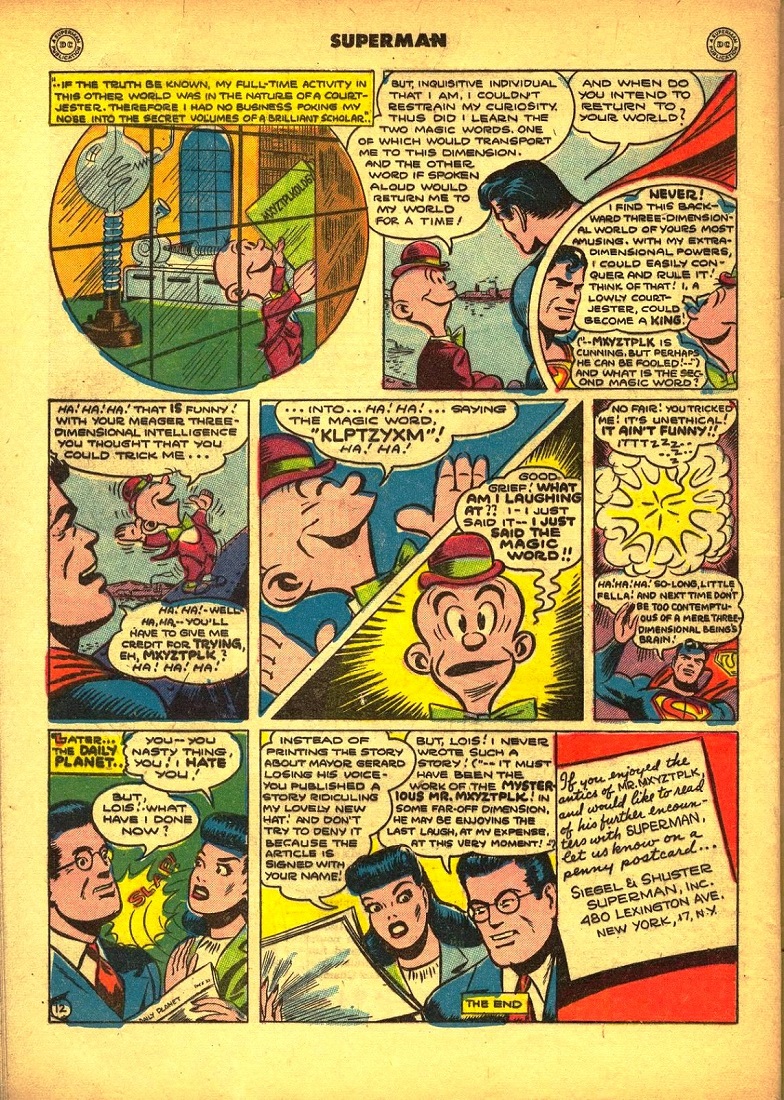 “The Impossible Mission” – Superboy #85 (Dec. 1960). Superboy travels back to April 14, 1865, in order to stop the assassination of President Lincoln, but then finds Luthor hiding out there to escape Superman. Luthor thinks Superboy is there to capture him and whips out a piece of Red Kryptonite, which always affects the Man/Boy of Steel in different ways — in this case causing him to be unable to move for a time and thereby unable to save Lincoln. Drawn by George Papp. 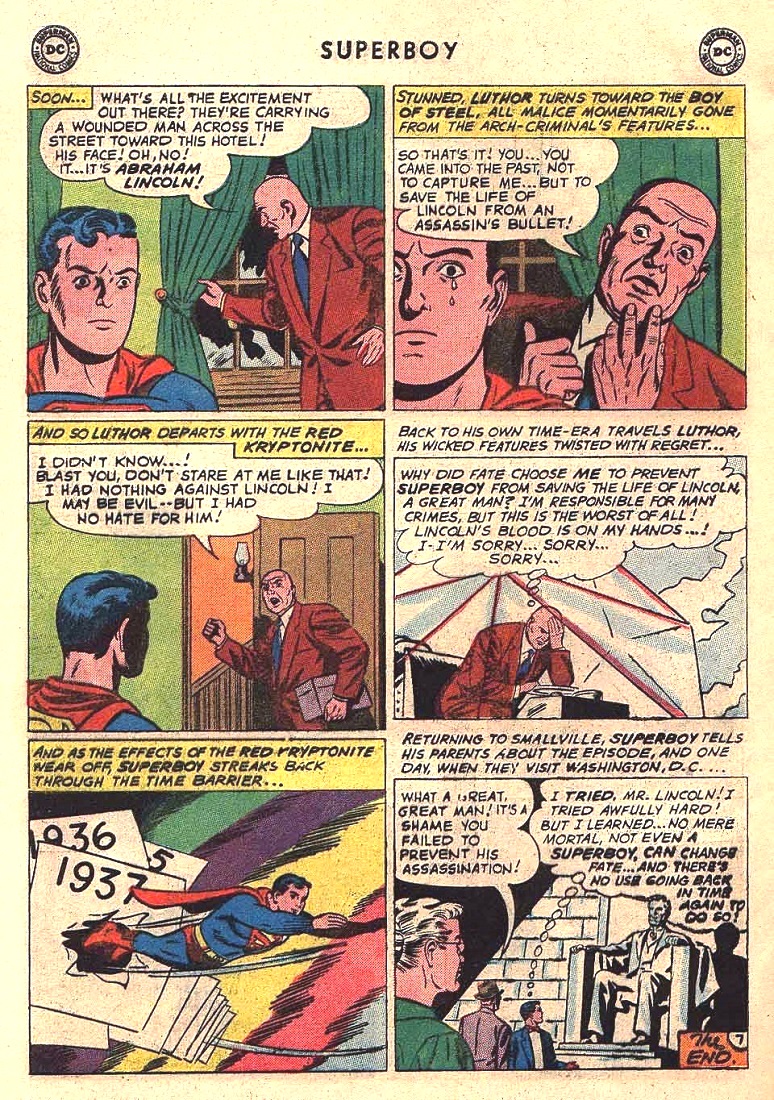 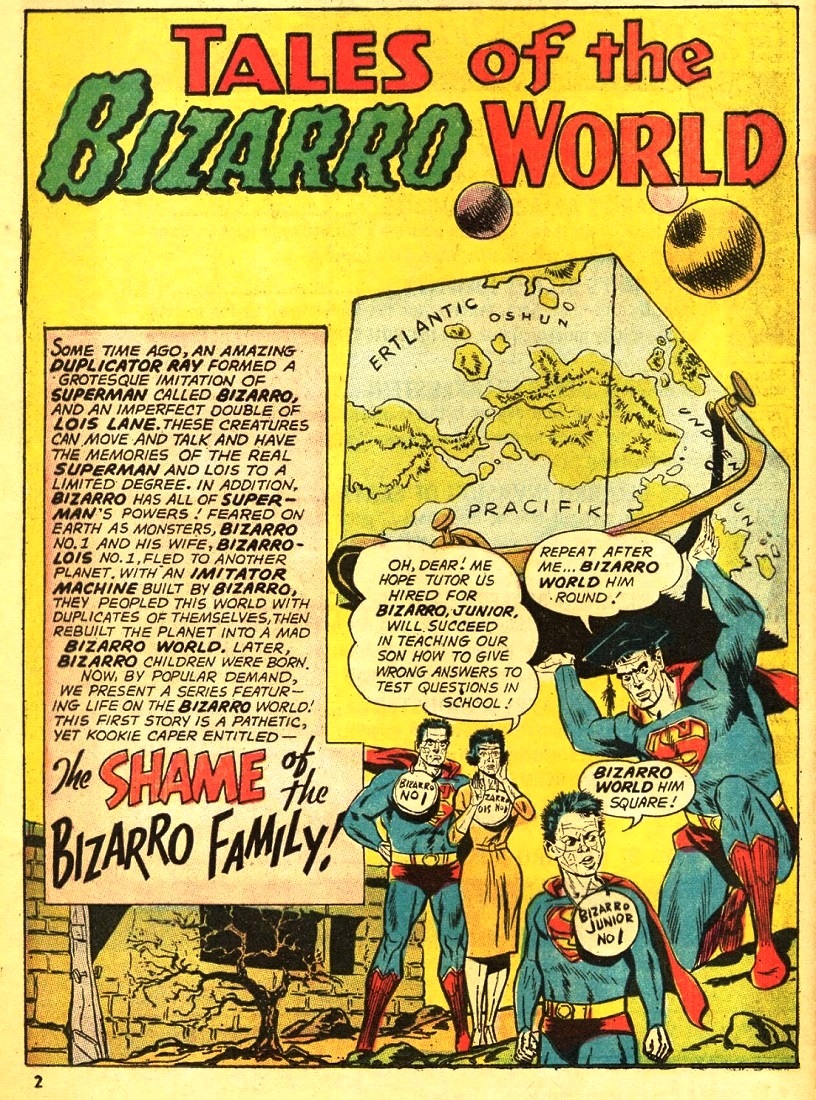 “The Death of Superman!” – Superman #149 (Nov. 1961). This is my favorite Jerry Siegel story. An “imaginary story” three-parter in which Luthor pretends to reform in order to gain Superman’s confidence and, when Superman does trust him, Luthor kills him with Kryptonite in front of Lois, Perry and Jimmy. Siegel’s writing and Curt Swan’s art (with inks by Sheldon Moldoff) are especially potent in a three-page sequence that shows Superman laying in state, with the deeply moving thoughts of his close friends and those of mourning aliens who have come from across the universe to pay their last respects. The tale ends with Supergirl capturing Luthor and putting him on trial before an unforgiving judge and jury in Kandor. 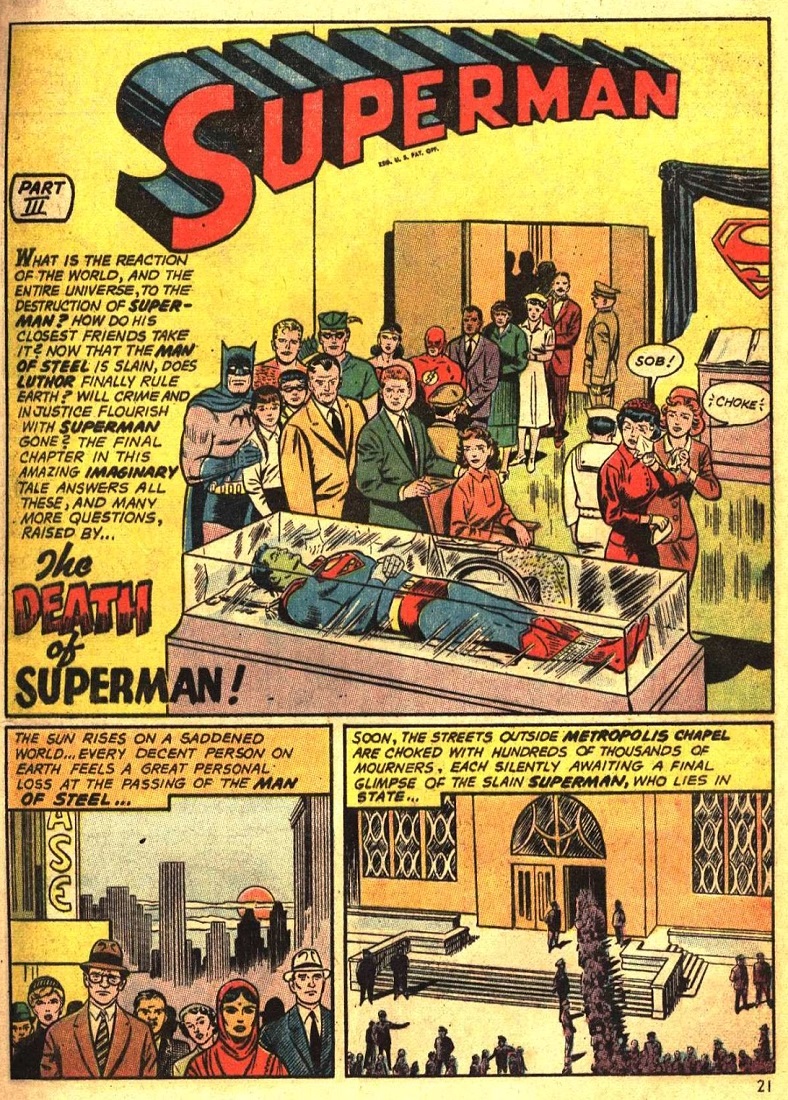 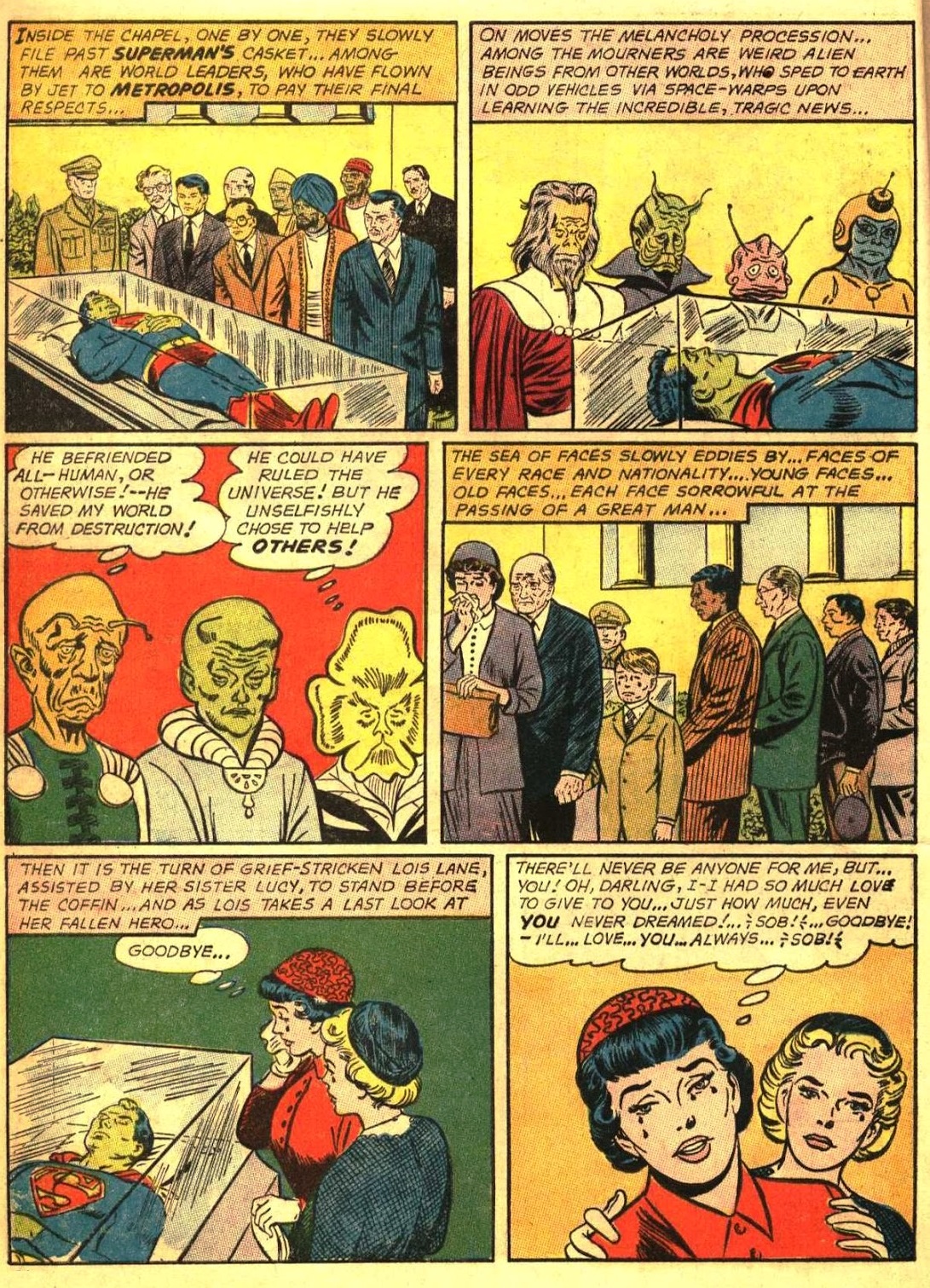 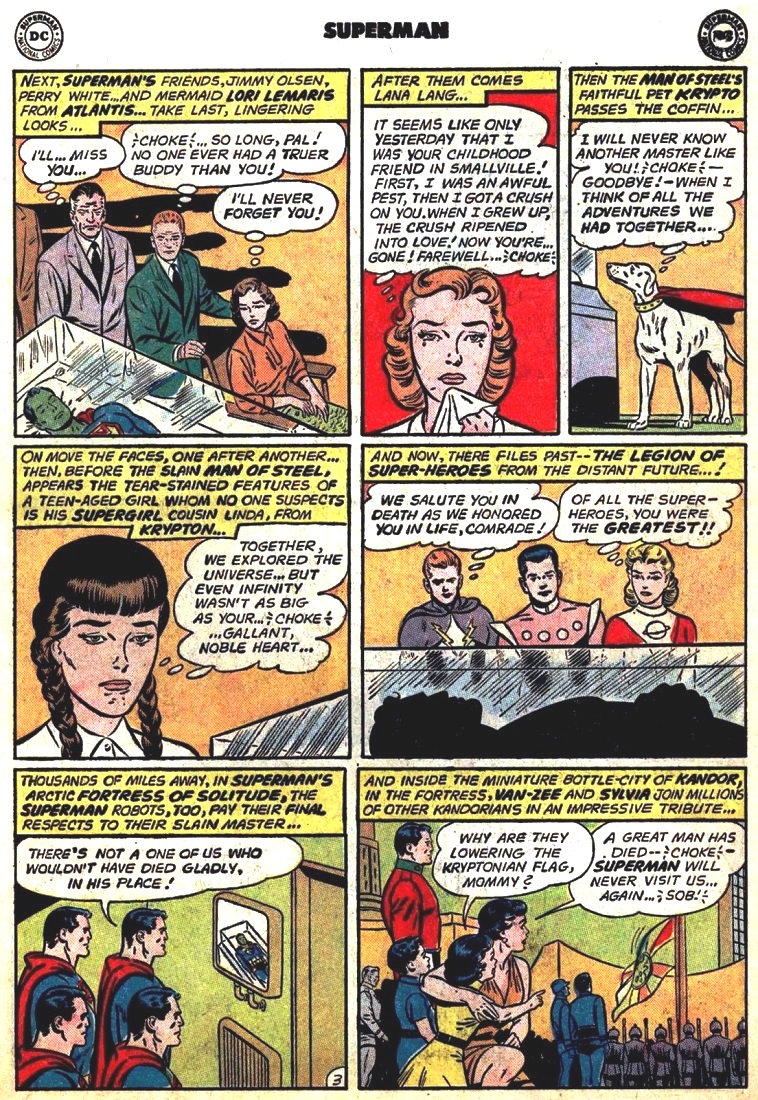 7. “When the World Forgot Superman!” – Superman #150 (Jan. 1962). After a space mission, Superman returns to Metropolis to find no one remembers him and people discover that his super powers are done by tricky devices, including a jet pack that suddenly appears under his cape for flying. It doesn’t take long before Superman works out that Mr. Mxyzptlk is behind it all. Swan pencilled and Boring inked the story. 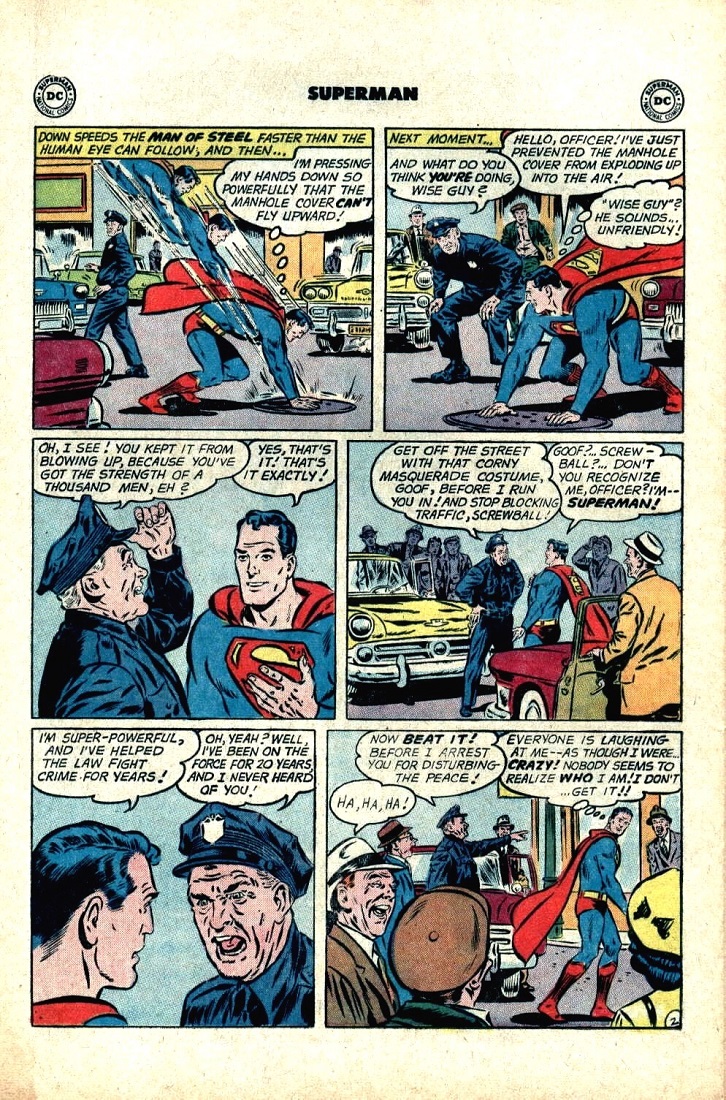 “The World’s Greatest Heroine!” – Action Comics #285 (Feb. 1962). After having been introduced in Action Comics #252 (May 1959), and acting as Superman’s secret emergency partner for nearly three years, Supergirl is finally introduced to the world. Drawn by Jim Mooney. 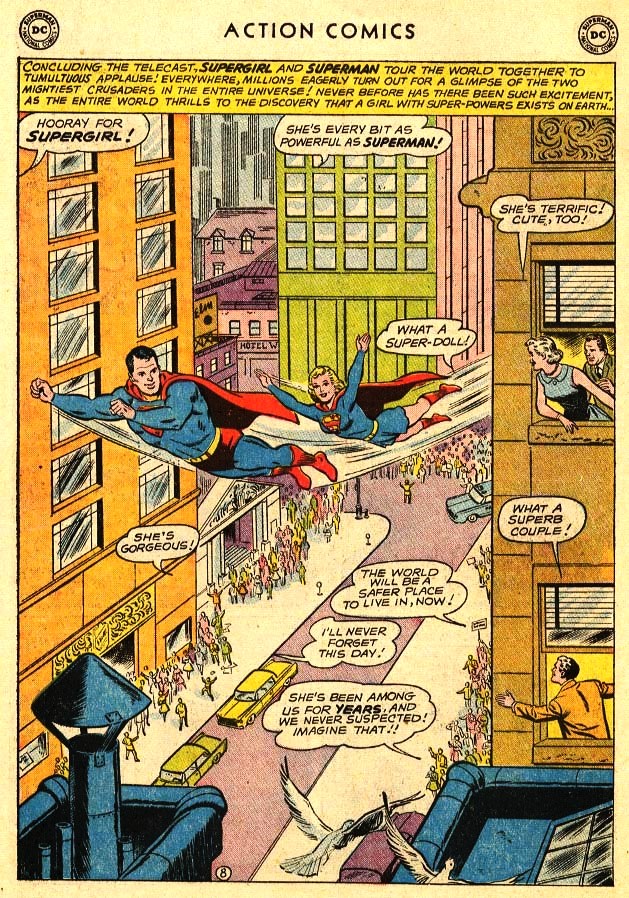 “The Robot Master!” – Superman #152 (Apr. 1962). While it is a good mystery, this is another time when Superman editor Mort Weisinger had members of the Superman family go to extraordinary lengths to be cruel to one character in order to play a joke on them. In this case, Superman gets put through enormous strain and emotional pain, only to discover his friends were just joshing him. With Swan pencils and George Klein inks. 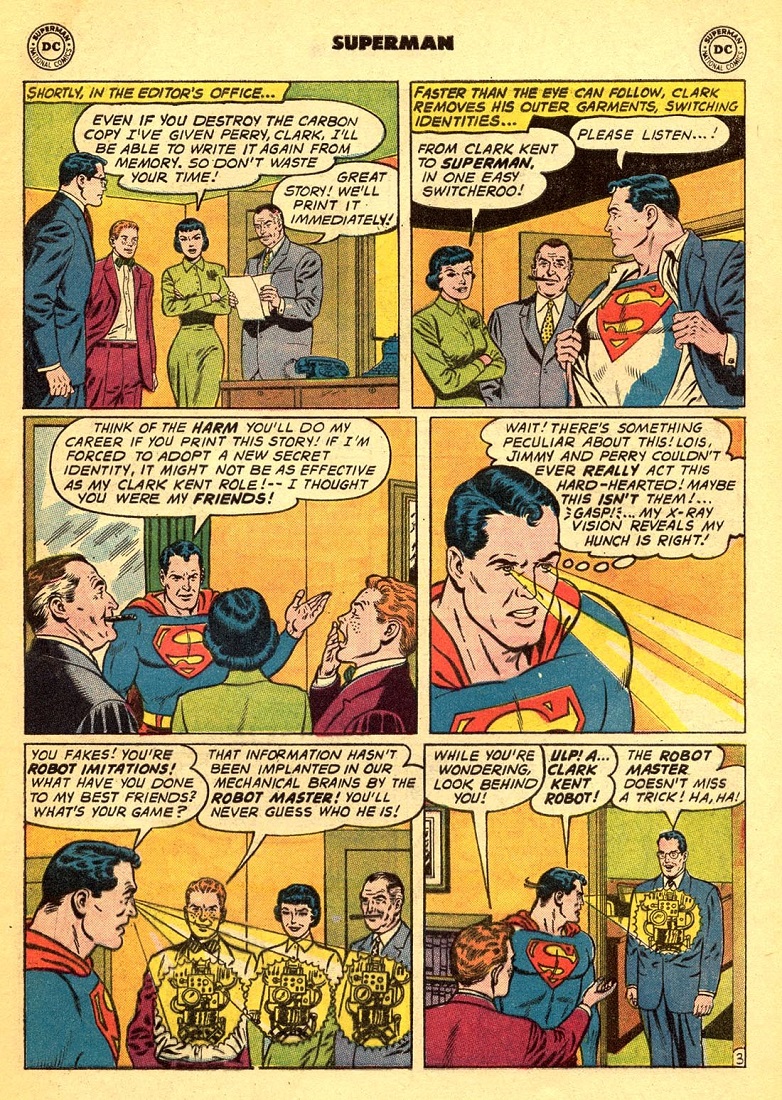 “The Simpleton of Steel!” – Superboy #105 (June 1963). This story is a frolic until the ridiculous ending. Red Kryptonite affects Superboy again, this time apparently making him “super-stupid.” It’s another story where the hero goes to elaborate means in order to flush out a crook. The real effect of the Red Kryptonite was revealed at the end of the story and it truly was super-stupid (it gave him an extra finger on each hand). Swan pencils, Klein inks. 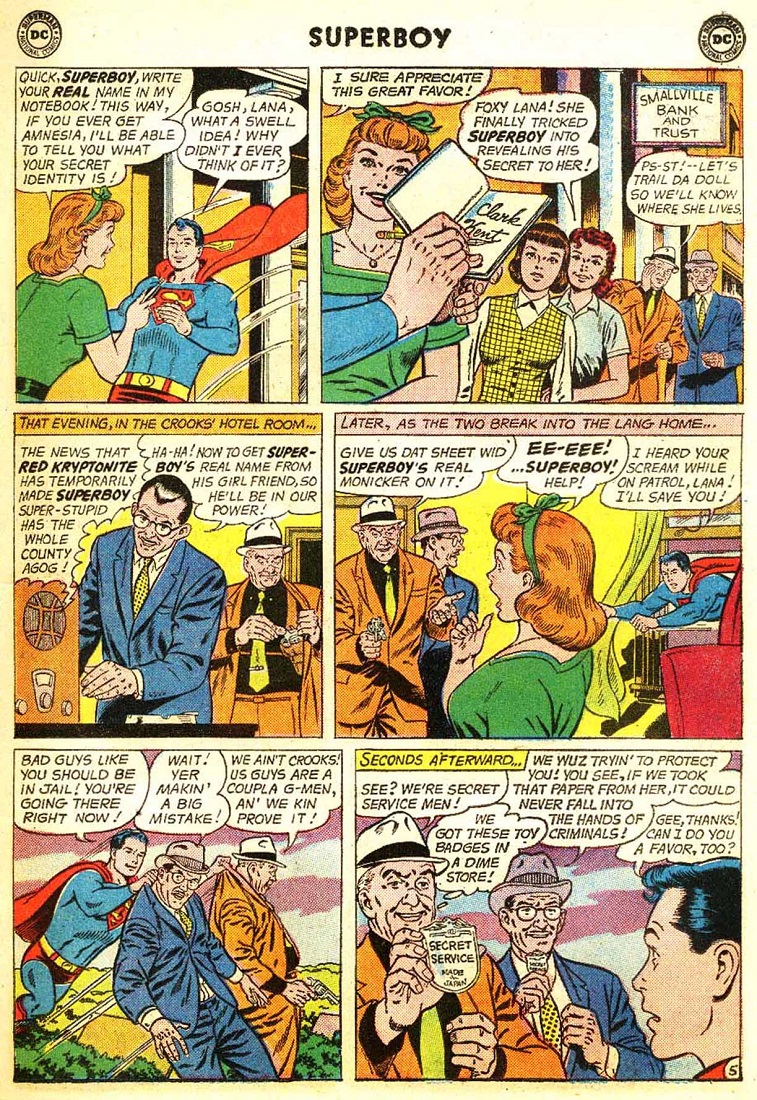 “The Sweetheart Superman Forgot!” – Superman #165 (Nov. 1963). Red Kryptonite causes Clark to lose his memory and his powers. While acting as an ordinary human, he falls in love with a beautiful young woman, but as a result of an accident he is crippled and forced to be in a wheelchair. While contemplating his future by a cliffside, a jealous rival tries to scare him but accidentally knocks him off the cliff into the sea. Days later, he wakes in Atlantis, having been rescued by Aquaman. His memory and powers have returned but he doesn’t remember the love affair. Meanwhile, the woman is heartbroken, thinking he died. It was a memorable and serious story by Siegel and he wrote a sequel to it in Superman #169 (May 1964). Both parts were drawn by Al Plastino. 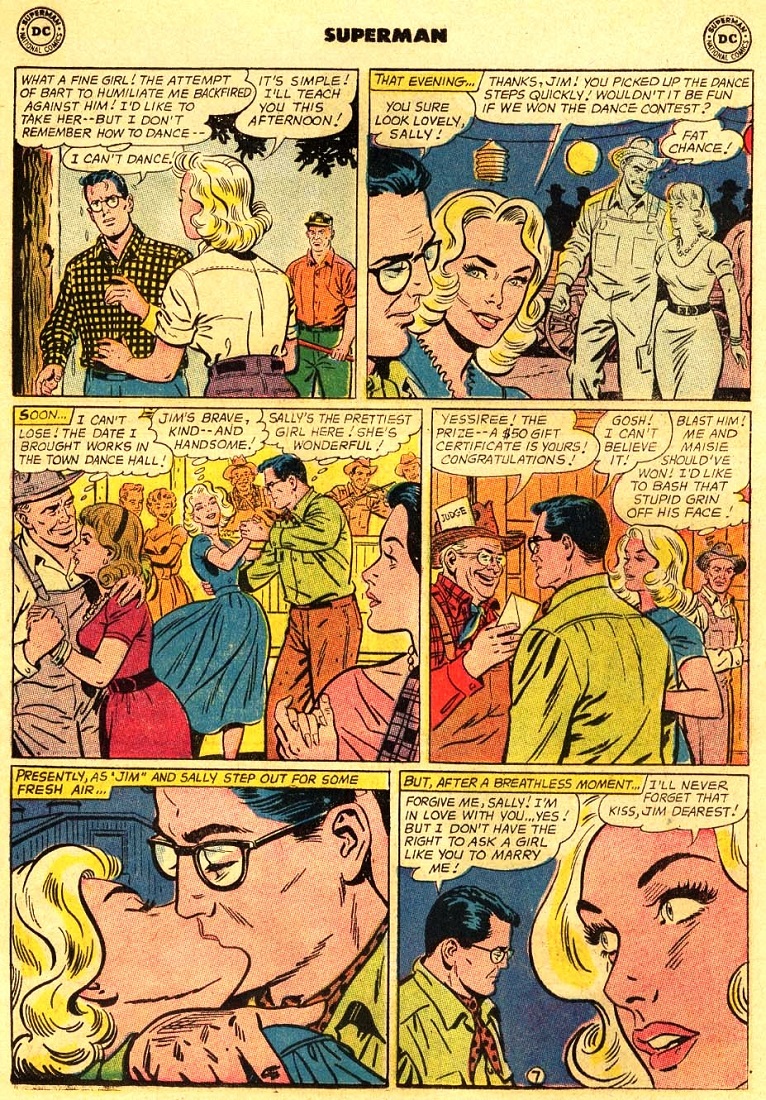 “The Bizarro Invasion of Earth!” – Superman #169 (May 1964). Bizarro #1 and his fellow Bizarros threaten to destroy the planet and it’s up to Superman to stop them. Lots of Bizarro illogic here. However, the gimmick of the story – also known as “The Great DC Contest!” – was that DC invited readers to find the letters “D” and “C” in the story. In the below image, you can see where the letters were. Art was by Swan and Klein. (Twenty-five winners each got a Swan-signed original art cover.) 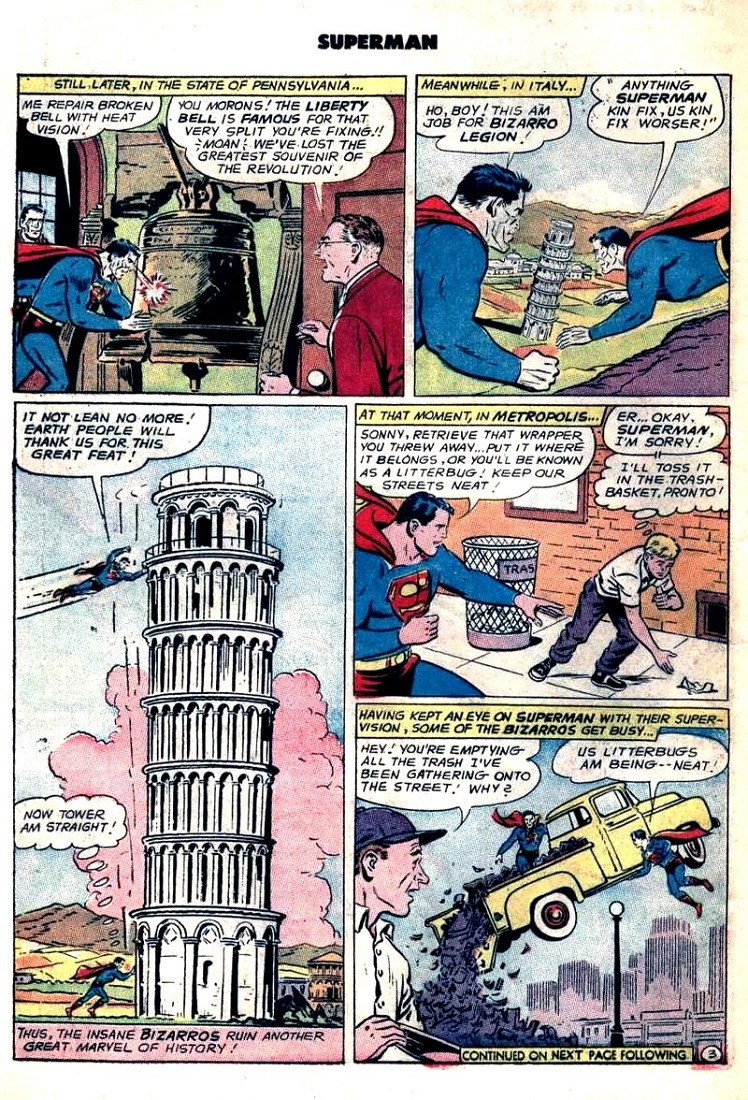 “The Bizarro Legionnaires!” – Adventure Comics #329 (February 1965). Nobody did Bizarros funnier than Jerry Siegel. In this two-chapter tale, Bizarro #1 creates a “Legion of Stupor-Bizarros” who, naturally, do everything wrong. When they make everything imperfect on a “Paradise Planet,” an alien yells “Oh, how I hate you for this! I hope every one of you freaks drops dead!” (Let’s see Alan Moore top that for dialogue.) Art by Jim Mooney. 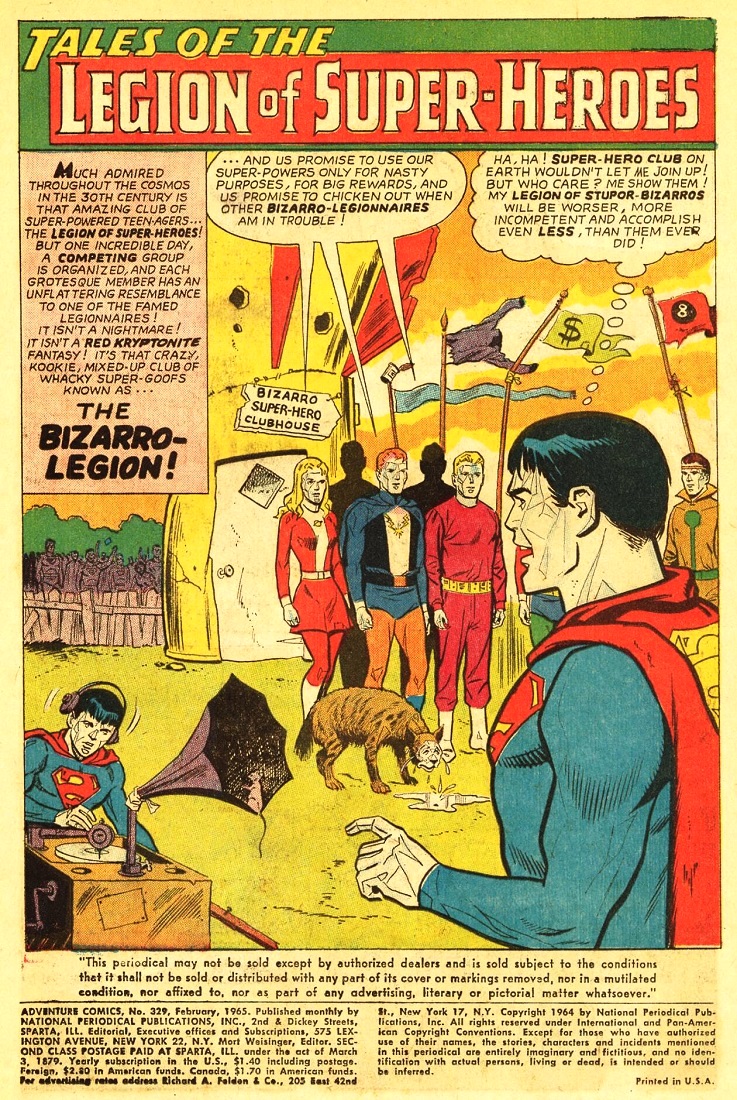