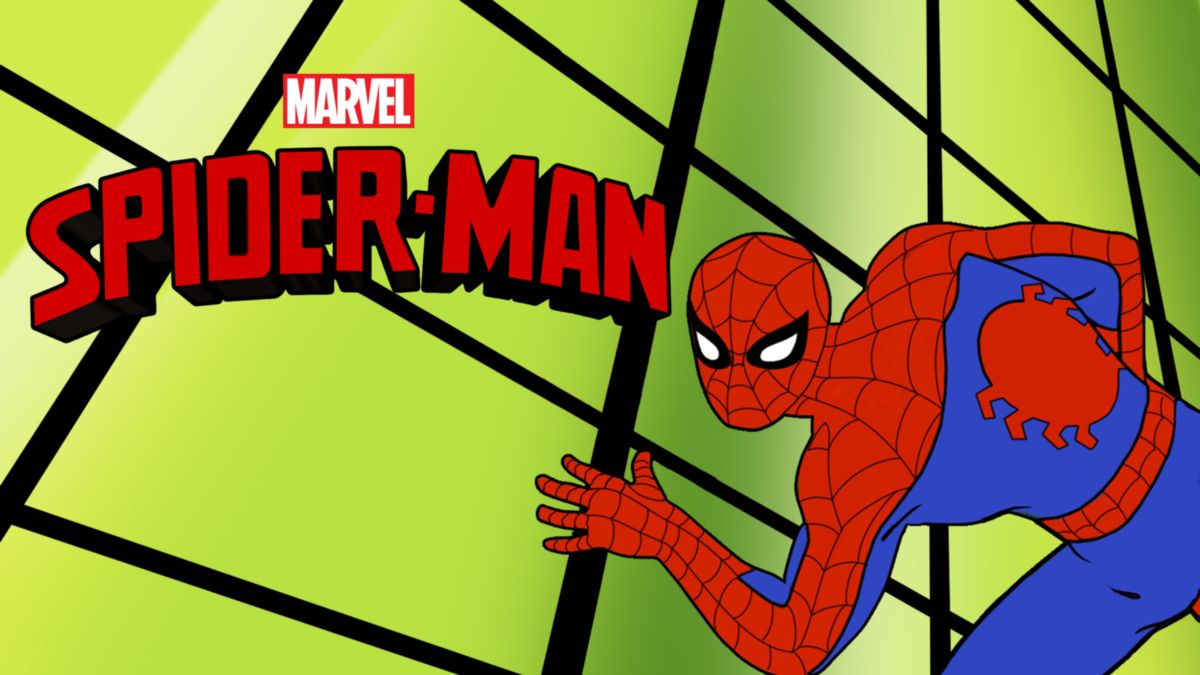 For all that I know about comics and related pop culture, there’s plenty I don’t. No need to hide it. There’re only so many hours in a day.

Example: It wasn’t until the last year or so that I even learned about the 1981 syndicated Spider-Man cartoon, which didn’t play in the New York area when I was growing up.

We had Spider-Man ’67 and that was all you needed, y’know? And I did watch Spider-Man and His Amazing Friends on Saturday mornings, because why not?

Anyway, thankfully, 1981’s Spider-Man is now readily available. But should I watch it? More importantly — should you?

Well, our buddy and contributor-at-large Scott Tipton has 13 REASONS TO WATCH THE 1981 SPIDER-MAN CARTOON SERIES.

If there’s anyone out there who has yet to sign up for Disney+ — and you love comics enough to be reading this website — well, what are you waiting for? There’s so much rare and unique material up there for streaming, well beyond the MCU films and the outstanding new Marvel original series.

One of my favorite discoveries was the 1981 syndicated Spider-Man series, a little-seen or remembered offering from the then-new Marvel Productions, produced at roughly the same time as Spider-Man and His Amazing Friends, which would air Saturday mornings on NBC. At first glance, the two series look alike, but there’s actually a lot that separates them, as I’ve been discovering.

Like what, you may ask? Well, here are 13 REASONS TO WATCH THE 1981 SPIDER-MAN CARTOON SERIES, in no special order:

Great Metropolitan Newspaper. Unlike Amazing Friends, which has a lot more emphasis on what Peter and roommates Bobby Drake and Angelica Jones were doing at Empire State University, this series leans hard into Spidey’s career as a photographer for the Daily Bugle, with frequent appearances by Bugle publisher J. Jonah Jameson, his secretary Betty Brant, and even Bugle Editor-in-Chief Joe “Robbie” Robertson. 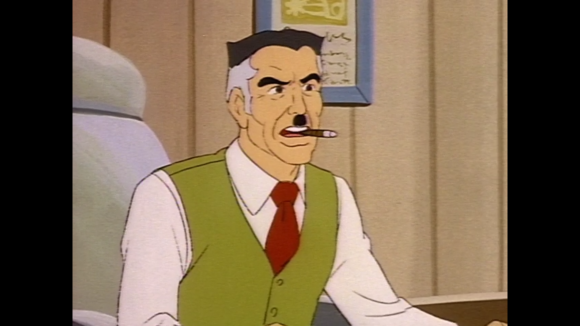 The Otis Factor. Speaking of ol’ JJJ, apparently the producers decided Peter Parker needed another reason to hate Jonah, so they introduced Jonah’s obsequious nephew Mortimer, who was always looking to “outscoop” Peter Parker. Think Ned Beatty to Gene Hackman’s Lex Luthor. Shockingly, Mortimer didn’t catch on and he was never seen again after this series. 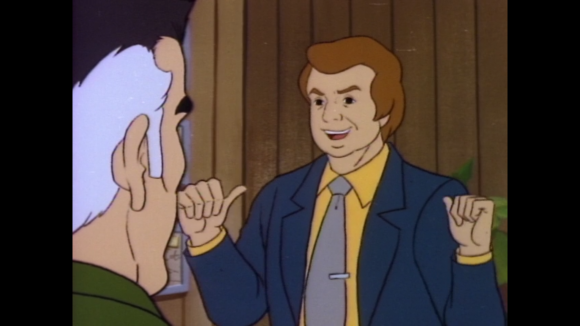 Doom, Doom and More Doom. Even though he’s usually the Fantastic Four’s arch-nemesis, this series certainly considered Doctor Doom to be Spidey’s top opponent, appearing in six of the series’ 26 episodes. Why so much Doom? My guess is that in the Star Wars-crazy world of the time, Doom was the closest thing to Darth Vader that Marvel had in their cast of characters. (Note from Dan: The late ’70s-early ’80s was also period of exceptional popularity for the character. He was everywhere – so much so that Marvel famously published a cover with Doom holding a sign proclaiming he was not in the issue.) 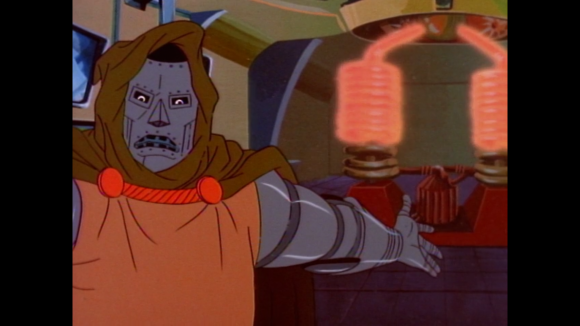 He’s a New Yorker. While Spidey’s voice in Amazing Friends is provided by Dan Gilvezan, who gives it a straight-down-the middle, all-American sound, in this series he’s played by Ted Schwartz, with a distinctly New York accent, especially as Spider-Man, where at times he almost sounds like a Borscht Belt comedian. (Don’t believe me? Go look at the scene from “Lizards, Lizards, Everywhere,” where a sick Spidey pays a visit to the doctor’s office, and delivers a joke so bad Fozzie Bear would be booing from the balcony.) 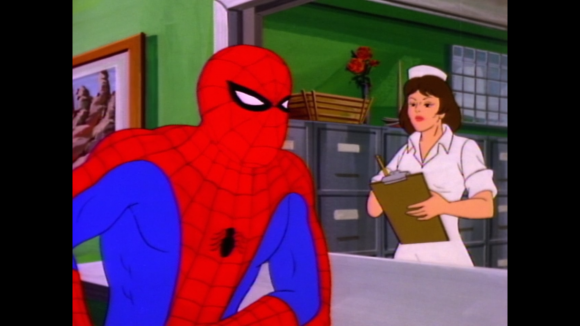 Safety First. Speaking of the Lizard, he makes an appearance in this series along with most of Spidey’s rogues gallery, which gets a lot more attention here than in Amazing Friends. I particularly like this moment where the Lizard makes sure to wear his safety goggles when he’s welding his doomsday machine. 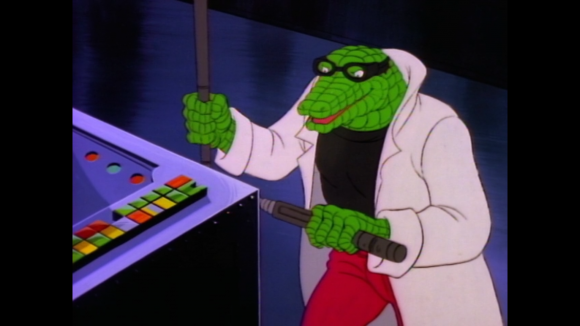 Hi, Felicia! This series also marked the first appearance of the Black Cat, who at the time was one of Spidey’s newer antagonists, having only recently premiered in the pages of Amazing Spider-Man. Too bad the show’s producers must have thought that her white hair was closer to gray – the actress they cast to play Felicia Hardy sounds older than Aunt May! 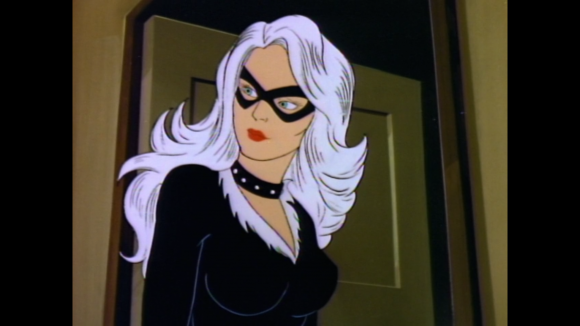 Happy New Year! Another thing this series had in common with Amazing Friends? Costume parties! Any excuse for a costume party. I mean, whoever heard of a New Year’s Eve costume party?  But it’s all worth it for this glorious shot of J. Jonah Jameson dressed like a pirate. 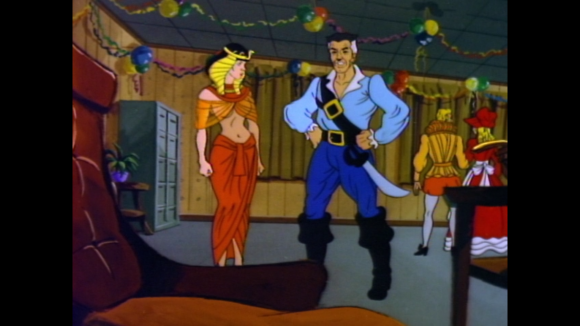 Unclear on the Concept. Of all Spidey’s villains, Mysterio has maybe the most clear-cut M.O. – “former special effects wizard who uses his illusions for crime.” Elegant and simple. Which explains why here when we see Mysterio, he’s… running a disco. Sure, why not? It was 1982, kids love disco. 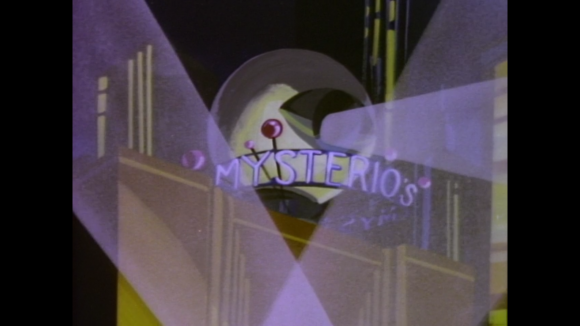 Children of the Atom. I thought it was only Amazing Friends that had all the X-Men guest appearances, until I saw “Circus of Crime,” where it’s revealed that the same carnival run by the villainous Ringmaster also features the brainwashed X-Men posing as the freak show from Uncanny X-Men #111! 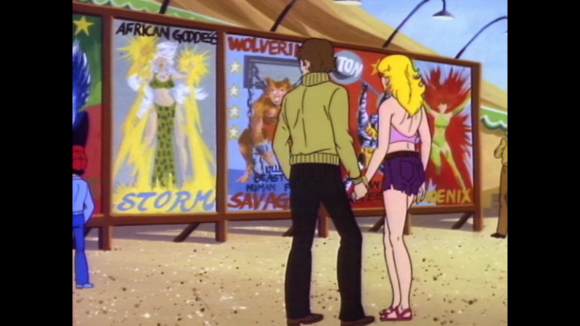 Everyone’s Crazy ’Bout a Sharp-Dressed Man. Speaking of the Ringmaster, I think this may be his only animated appearance to date, and here in an even louder version of his already garish look from the comics. And yet, he never once uses his pinwheel hat to hypnotize the audience! That’s his whole schtick! 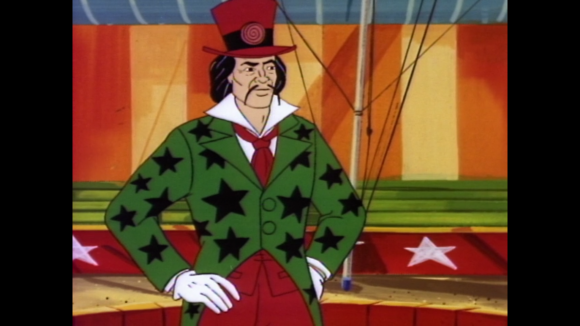 Villainy Is the Mother of Invention. The series starts strong with a classic 1970s-looking Doctor Octopus, who adds a wrinkle here that I can’t remember seeing Doc Ock doing anywhere else: weaponizing his mechanical arms! That buzzsaw at the end of one of his arms is scary as hell, and the blaster in the other one turns out to be very useful as well. Goblin Quality. You can always judge a Spidey series by how well they use the Green Goblin, in my mind always the wall-crawler’s greatest foe. Here in “Revenge of the Green Goblin,” they hit all the right notes, with Spidey and the Goblin knowing each other’s identities, right down to Norman Osborn losing and re-gaining amnesia every time he gets thumped on the head. 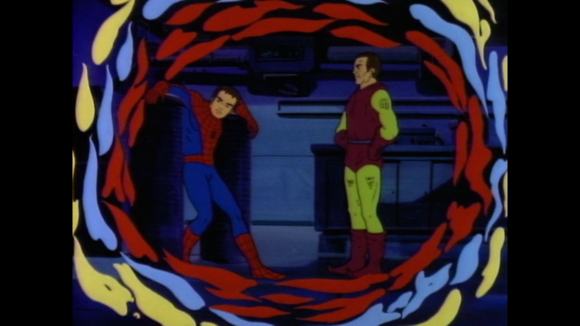 Ladies Love Cool Spidey. In the series’ most surprising finale, after Spidey helps free the Inhuman Medusa from being manipulated into a life of crime by the Wizard, the two have a tender moment on an NYC rooftop, before she flies away, presumably back to a fuming Black Bolt. Where the hell did that come from?! Scott Tipton is a New York Times best-selling author who has written everyone from Captain Kirk to Mickey Mouse. His most recent book, Deep Space Nine: Too Long a Sacrifice, is available now wherever books are sold.