13 QUICK THOUGHTS on the Remarkable BATMAN: THE DEFINITIVE HISTORY

REVIEW: An INSIDE LOOK at a startling achievement in Bat-history…

In December, Andrew Farago, the co-author of Batman: The Definitive History of the Dark Knight in Comics, Film, and Beyond, stopped by with 13 OFFBEAT FACTS ABOUT THE CAPED CRUSADER. You can click here to check it out because it’s a gas.

But we also wanted to take a broad look at the book itself, so fellow Batmaven Mark S. Reinhart — the author of The Batman Filmography — follows up here with a full-on review of what’s probably the most ambitious book ever written about the Dark Knight.

So dig these 13 QUICK THOUGHTS ON BATMAN: THE DEFINITIVE HISTORY: 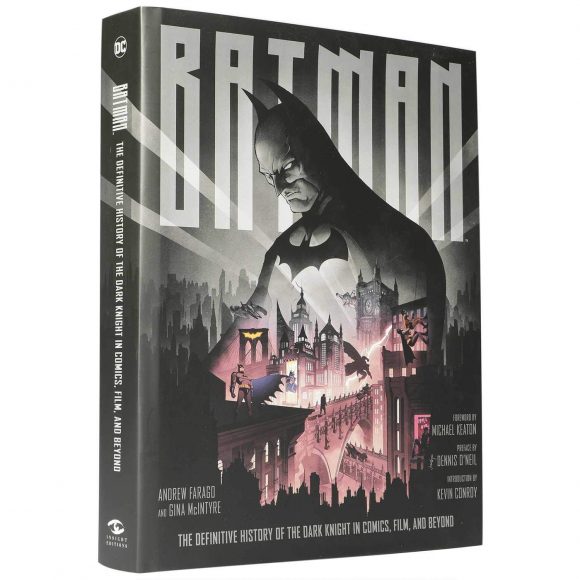 Out of all of the different Batman events and products designed to celebrate the character’s 80th anniversary in 2019, the one that I personally had been most looking forward to was the book Batman: The Definitive History of the Dark Knight in Comics, Film and Beyond by Andrew Farago and Gina McIntyre.

Published by Insight Editions, the book was being billed as “the most comprehensive history of Batman ever written.” I’ve pored over BTDH quite a bit now, and it comes close to living up to its lofty billing.

So here are 13 QUICK THOUGHTS on the book:

1. It’s Like Taking a Trip to a Batman Museum. BTDH is laid out in chronological order, following the character’s exploits from his debut in 1939 right up until the present day. And the book is GIANT! It measures 9.2 x 1.8 x 12.8 inches, and is more than 400 pages long. It is beautifully printed on heavy paper, with many full-page illustrations, allowing you to really immerse yourself in the detail.

2. The Big Screen Gets Big Treatment. Given my interest in Batman feature films, I particularly loved its full-page photos of many of the actors who have played the character on the big screen since the 1940s. These photos make you feel as if the actors are standing right in front of you, so you can really spend a lot of time studying the costuming and set design of these films. 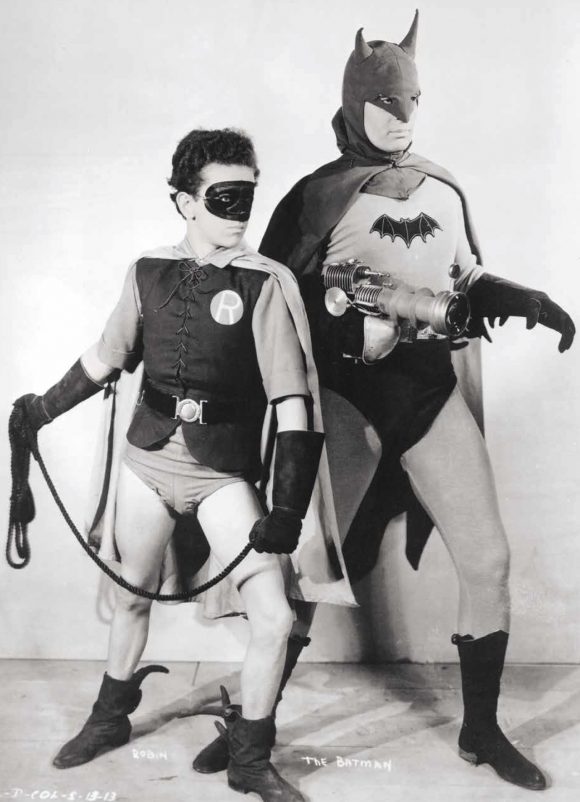 Batman (Lewis Wilson) and Robin (Douglas Croft), stars of the 1943 serial. The images in this review are culled from the book.

3. Find Yourself a Nice, Sturdy Table. Since BTDH is so large, it really is uncomfortable to hold when you sit down to read it for a long time! I didn’t want to be distracted from enjoying the book due to fact that my arms were going numb, so I chose to set up a sturdy (and very clean!) wood TV tray to hold it while I read it.

4. There Are Several Books Inside the Book. I think my single favorite feature might be the reprint of Batman’s debut story, The Case of the Chemical Syndicate from 1939’s Detective Comics #27. The book displays the issue’s iconic cover larger than original size — and behind that, all six pages of the story are printed in the same size, semi-detached from the overall volume. So, in essence, you get your very own high-quality replica of Batman’s debut story. 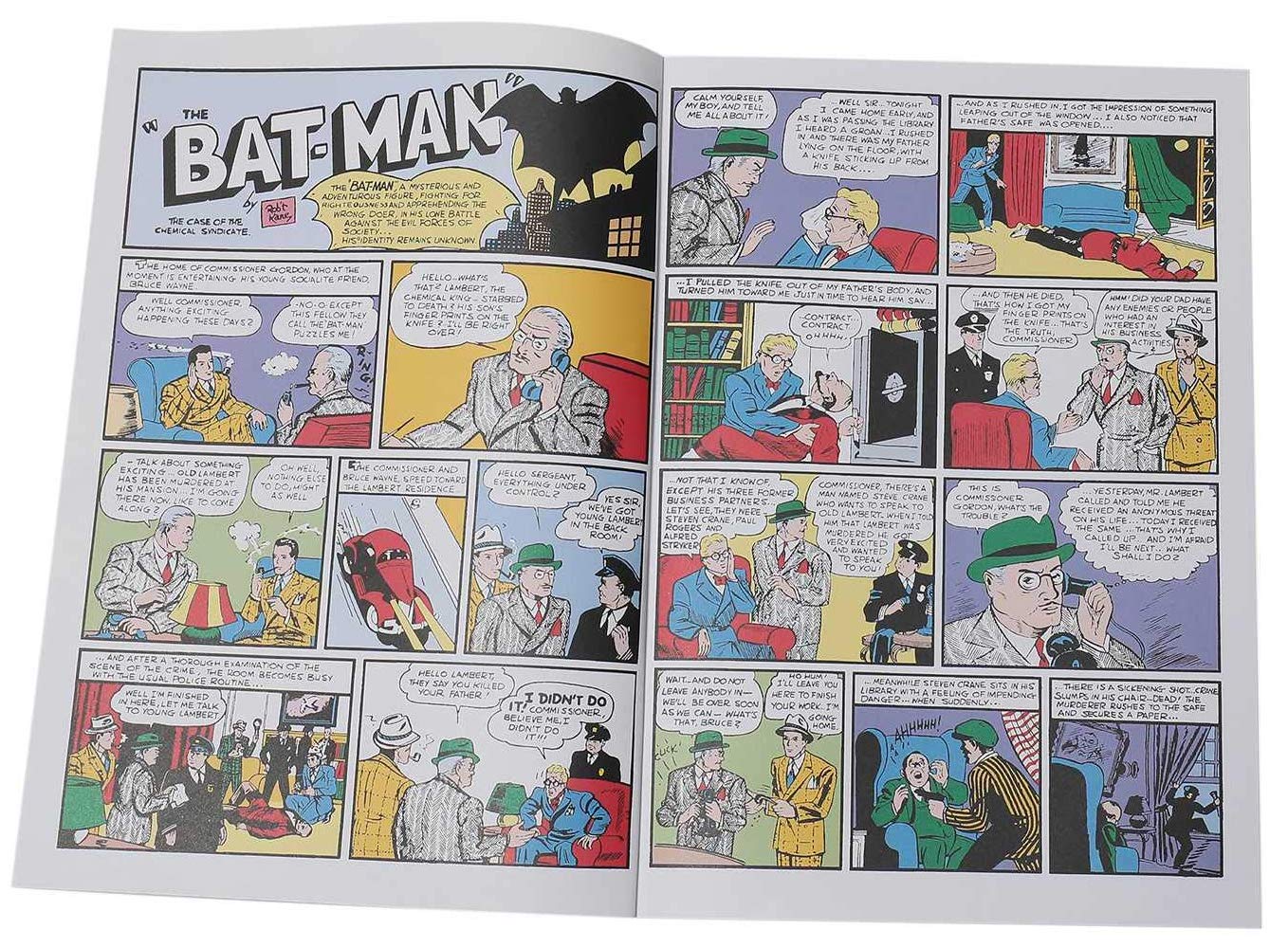 5. And Not Just Stories, Either. There are pullouts showing costume designs, scripts, storyboards and more! 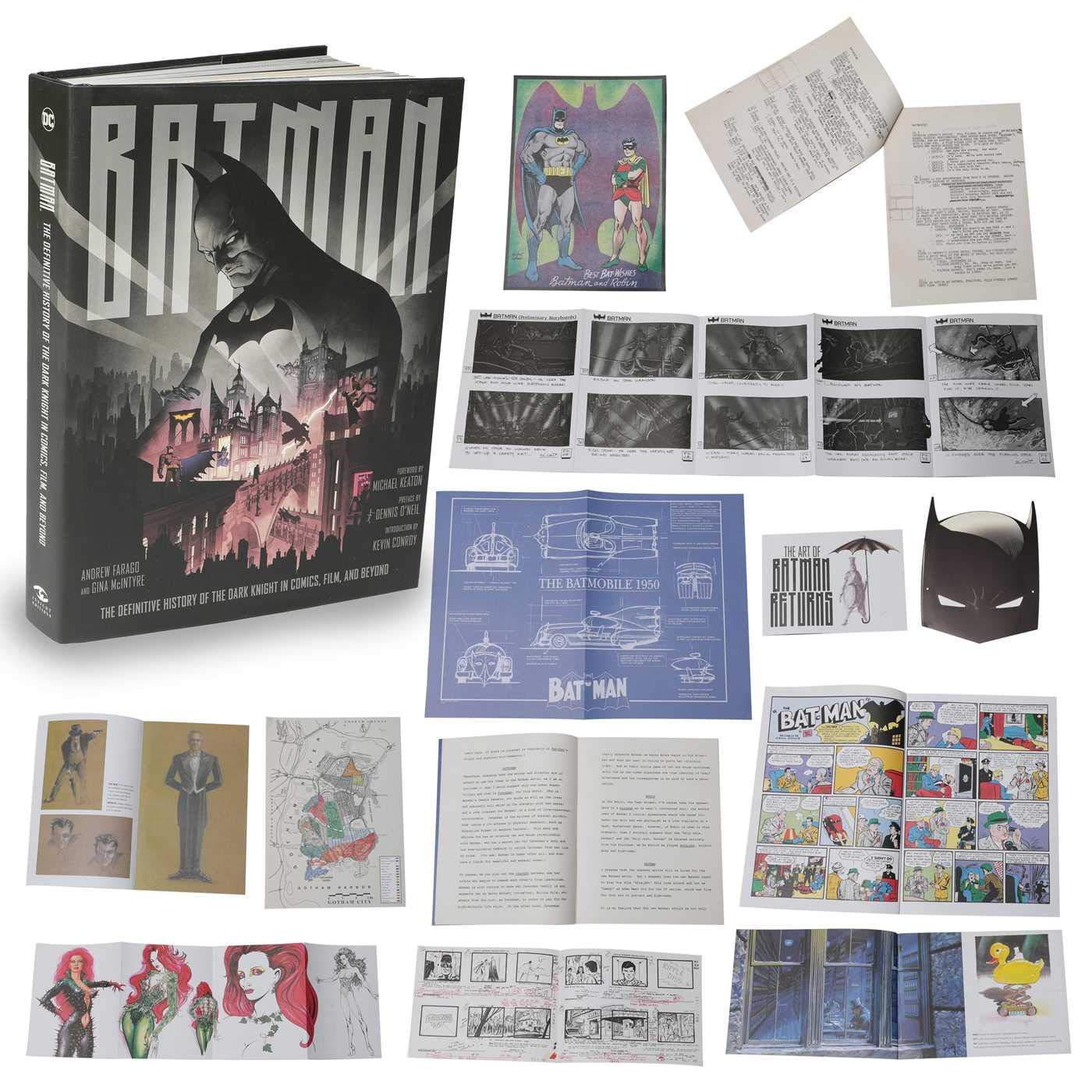 6. There Are Insightful Observations From a Wonderfully Wide Variety of Sources. How’s this for a start: Michael Keaton, Denny O’Neil, and Kevin Conroy all write their own introductions to the book! And the list of Batman experts who contribute interviews and commentary just goes on and on. I know someone who might not feel comfortable being mentioned as one of those experts, but I’m going to brag on him just a little anyway. I won’t even mention him by name — I’ll just say that someone we all know and love here at 13th Dimension is quoted a number of times in the book’s discussion of the Batman cartoon series produced by Filmation. Being a part of this book gives one a very prestigious spot in Batman history — so congrats, unnamed person! 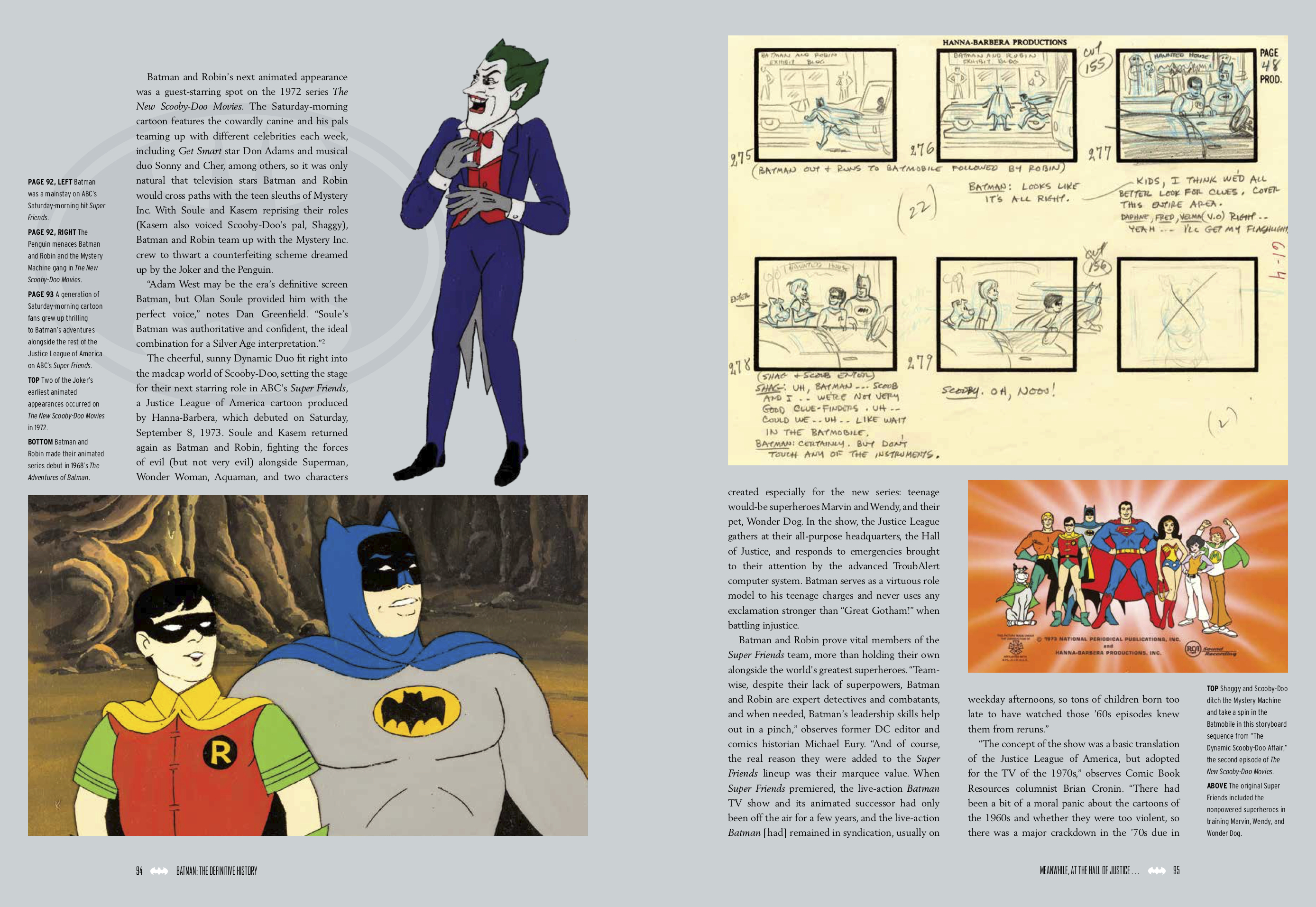 A spread from the book’s section on early Batman animation

7. The Book Does a Solid Job of Covering Batman in Various Media. When DC celebrated the 75th anniversary of Batman’s debut in 2014, I was surprised that a book like BTDH was not released. The closest was Batman: A Visual History by Matthew K. Manning. That book was an enjoyable, very lavish recounting of Batman’s 75-year comic history, but it made almost no mention of the character’s movie and television history. BTDH, on the other hand, covers Batman’s history in many different media. In it, you will find a wealth of information relating to Batman comics, graphic novels, movies, TV shows, video games and more. Still, there are a few areas of Batman history where I wanted more, such as…

8. The Book Could Have Given More Coverage to Batman Merchandise. BTDH does spend a few pages showing some of the merchandise produced during the Batmania of 1966, but the book could have used more pages on the topic of Batman toys and collectibles in general. A few large photos showing items made by companies such as Mego, Kenner, Mattel and DC Direct would have really enhanced the book’s overall quality. 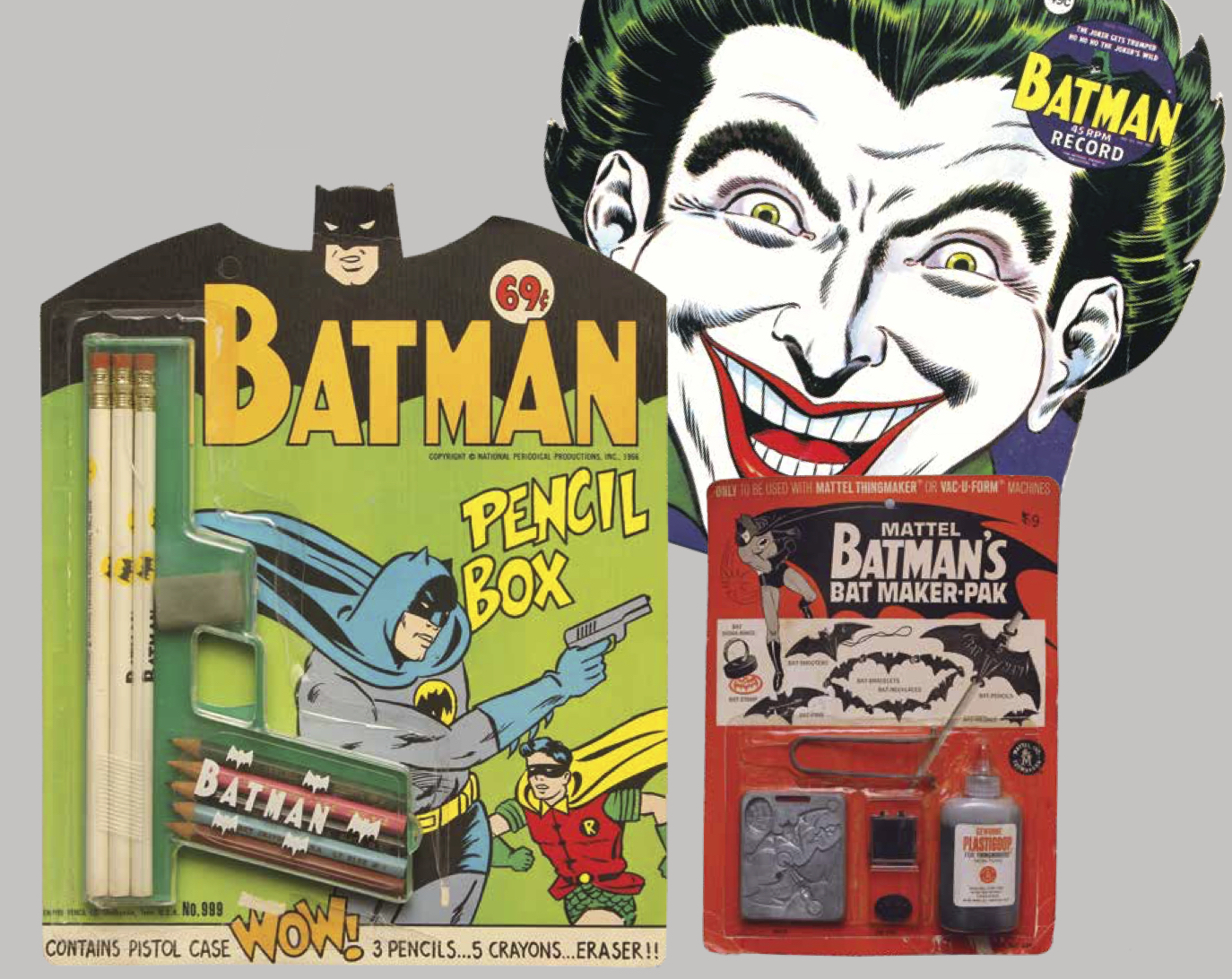 9. More Animation, Please. Given the fact that BTDH gives so much coverage to animated Batman works such as the Filmation cartoons, Batman: The Animated Series, The Batman, and even the poorly-received Beware the Batman, it’s surprising the book did not devote more coverage to DC’s original animated Batman movies.

10. And More Alex Ross, Please. This is a personal quibble: Alex Ross’ art shows up in a few full-page illustrations — but there is no mention of his classic graphic novels that feature Batman, such as Kingdom Come (1996) or Batman: War on Crime (1999). 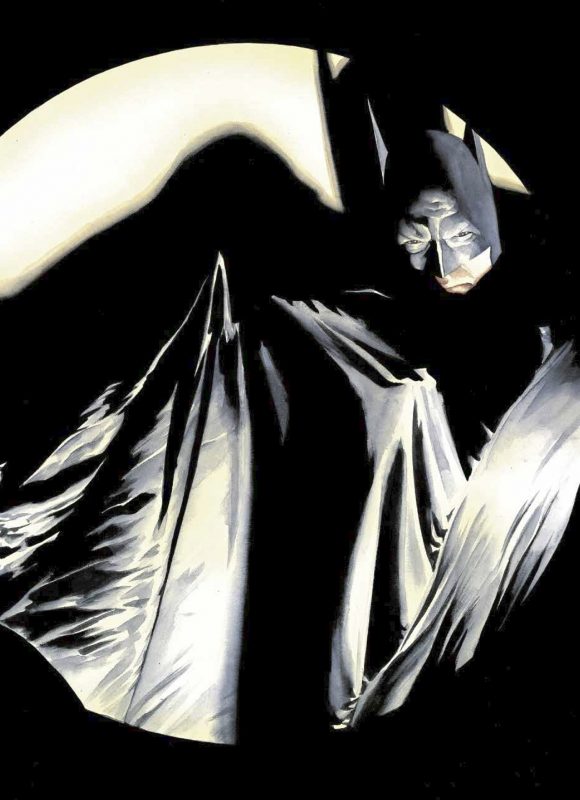 11. If You’re a Big Fan of Frank Miller or Tim Burton, You’re in Luck. BTDH gives an enormous amount of coverage to Miller’s graphic novels and Burton’s two films. There are so many pages devoted to the work of these two men that this content could almost be a standalone book. Don’t get me wrong, though. I love the graphic novels Batman: The Dark Knight Returns and Batman: Year One, and I especially love the 1989 film Batman. (I saw the movie in theaters more than 20 times in the summer of 1989!) 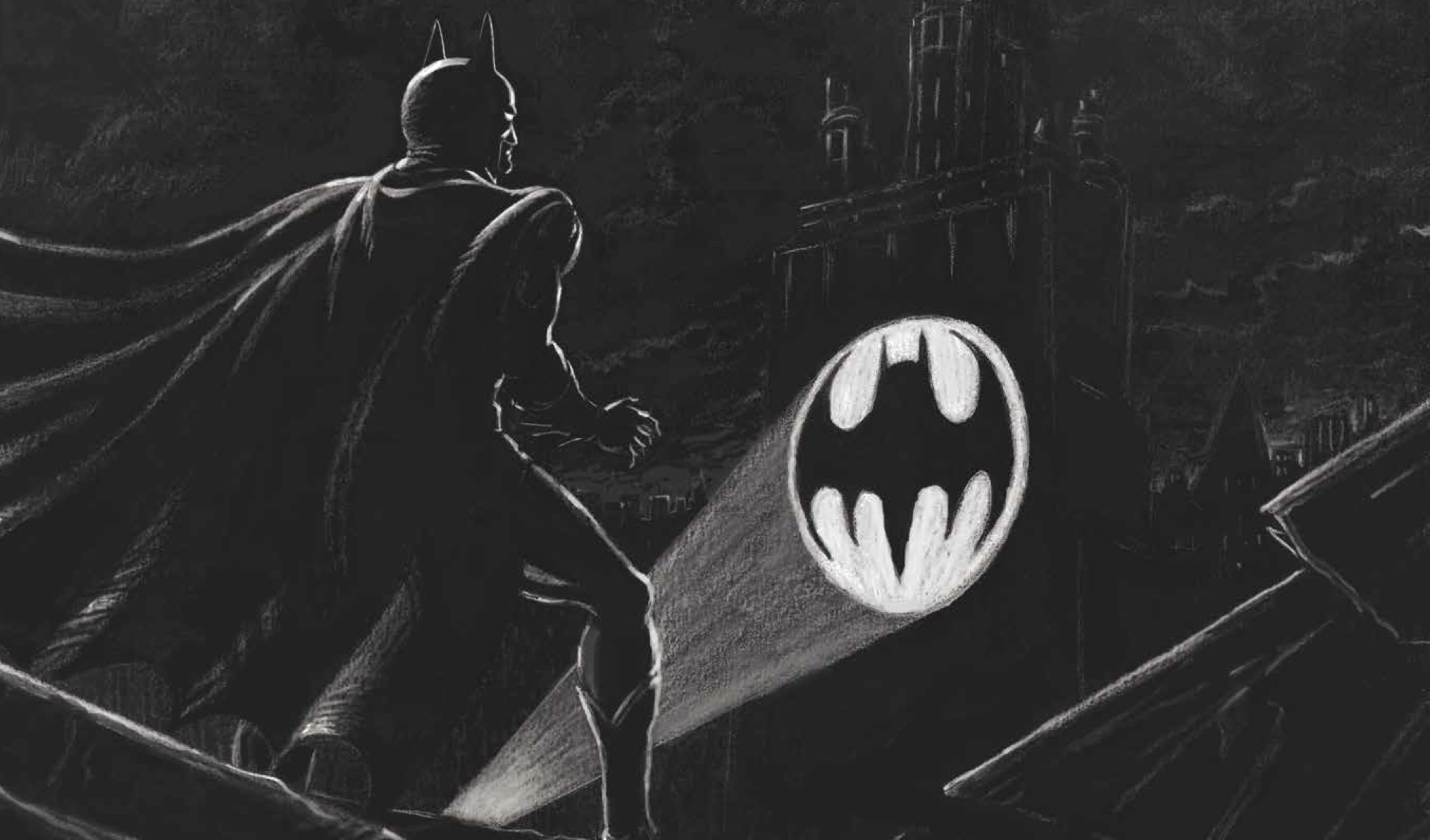 12. Keep the Book Next to Batman: The Complete History by Les Daniels on Your Bookshelf. Some of you Batman fans who have been following the character for a long time might remember a book that was a forerunner to BTDH called Batman: The Complete History by Les Daniels. It was released in 1999 to commemorate the character’s 60th anniversary, and it provided a concise summation of the Dark Knight’s history in the comics and on the screen. The book’s visuals were every bit as strong as its text — it was designed and art directed by Chip Kidd, author of the 1996 book Batman Collected. Kidd has a knack for constructing imagery pulled from wildly varying sources, so the illustration pages in his books almost seem to tell stories that aren’t found in the original sources themselves. BTDH’s visuals are more straightforward, so the two books recount the history of Batman in markedly different styles — but both do a great job with their subject.

13. I Sure Hope I’m Still Around For Batman’s 100th! I was born in 1964, the year Batman marked his 25th anniversary. So I’ve celebrated a few milestones of my own as Batman has had his big anniversaries. I’ll be 75 when Batman hits his 100th — and if the overall high quality of BTDH is any indication of how DC plans to commemorate future major Batman anniversaries, count me in for the party! 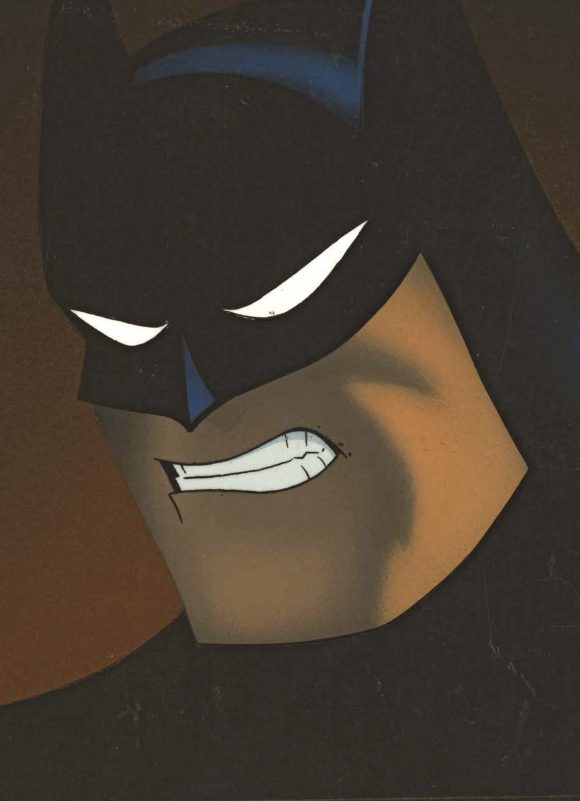 Batman: The Definitive History of The Dark Knight in Comics, Film, and Beyond, by Andrew Farago and Gina McIntyre is published by Insight Editions. The 400-page, oversized hardcover lists for $75 but can be purchased for less at booksellers such as Amazon.