13 QUICK THOUGHTS on the AQUAMAN Trailer 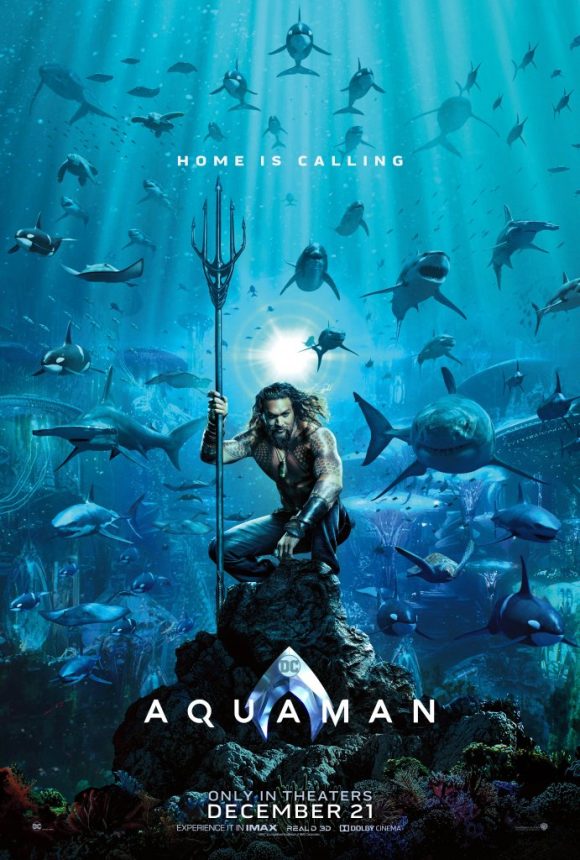 If there’s one person whose opinion you want on the Aquaman trailer that debuted at San Diego Comic-Con – besides yourself – it’s Rob Kelly.

Rob’s a longtime columnist here at 13th Dimension but he’s better known as the guy who founded and ran for 11 years The Aquaman Shrine blog, the world’s greatest resource on the Sea King. (Click here.) And of course, he’s the co-host of the ever-popular Fire and Water Podcast, which also celebrates the adventures of Atlantis’ boldest. (Click here.)

So here’s the footage again — and Rob’s 13 QUICK THOUGHTS ON THE AQUAMAN TRAILER:

I have been an Aquaman fan ever since I first saw him on ABC’s Super Friends cartoon show in the early 1970s. As the creator of The Aquaman Shrine blog (2006-2017, now dba as a quite superb Twitter feed), I would love to say I’ve been waiting 40-plus years for this moment, but that’s not really true. That’s because, up until just a few years ago, the idea of an Aquaman movie was so far-fetched that I never once considered it even a remote possibility. Yet, here we are. So here are my 13 QUICK THOUGHTS:

1. The Origin. I’ve always thought Aquaman’s Silver Age origin was so primal, so simple, that subsequent changes to it were unnecessary and just gum up the works. I’m happy to see that for the movie, Arthur Curry will again be the son of a surface dweller and the Queen of Atlantis.

2. The Aquarium Sequence. In a perfectly executed opening sequence, the film shows why the ability to “talk to fish” is nothing to laugh about.

3. Permission to Come Aboard. Our hero gets a great, dramatic entrance, complete with fun intro line. This scene tells us that the dour, downbeat, depressing tone of the previous DCU films will not be duplicated here. This hero is enjoying himself!

4. Mera. Amber Heard looks pretty much exactly like the way the boffo team of Ivan Reis, Joe Prado, and Rod Reis visualized her during their triumphant run on the Aquaman book.

5. and 6. Amazing Visuals. We get brief glimpses of the remarkable undersea world of our hero, again seemingly ripped (okay, copied, because you don’t want to rip up your comics) from the pages of Aquaman, Adventure Comics and all the other books whose pages the Sea King has swum through.

7. Knife to Meet You. Aquaman grabs a knife in his bare hands and then breaks it off with a mighty chop. Badass!

8. Pep Talk. Jason Momoa can be funny! I didn’t know that.

9. The Crowd Goes Wild. A great laugh in the middle of all this drama.

10. The Sub Mariner. He may not be Superman, but Aquaman is no slouch in the super powers department. Here, we see him lift an entire submarine, which looks like a great set-piece.

11. Synchronized Swimmers. In a sequence that, once again, looks like the work of Reis-Prado-Reis come to life, Aquaman and Mera face a swarm of bad guys (the Trench?) and then do a coordinated dive into the ocean. Something tells me these two are gonna get along.

12. Black Manta. Movie studios have a tendency to overwork things, redesigning costumes and vehicles that looked just great in comic form. Here, we see that Manta’s classic domed head has been faithfully recreated, along with blood-red eyes. Is it too much to ask that he come with his Challenge of the Super Friends voice?

13. That This Movie Exists At All. As I mentioned above, the idea that I would ever see an Aquaman movie was so absurd it never crossed my mind it would happen, even over 40 years of reading his comics. To see Warner Bros. make the trailer’s debut the main event at the mecca of geekdom, San Diego Comic-Con, is just simply unbelievable. And while I’ve had a lot of issues with the DCU films to date, this trailer delivered almost everything an Aqua-Fan could ask for—the classic origin, Mera, Ocean Master, Black Manta, plus even more stuff from Aqua-History we haven’t even seen yet.