Director JOEL SCHUMACHER has died at the age of 80…

UPDATED 6/22/20: Filmmaker Joel Schumacher has died at the age of 80, so it seemed appropriate to re-present this defense of the much-maligned Batman & Robin. It first ran as the epilogue to 2019’s BATMAN WEEK. You may find you’ll agree more than you expect. — Dan

It’s the end of BATMAN WEEK! We’ve been celebrating Detective Comics #1000 and the 80th anniversary of the Caped Crusader. For the complete index of features and tributes — many by some of the top creators in comics — click here.

Over the last two weeks, related to our BATMAN WEEK festivities, we’ve published THE TOP 13 BATMAN COUNTDOWN, a daily listing of the very best stories of the Caped Crusader’s first 80 years, as selected by a panel of top comics pros and experts. (Click here.) We’ve also produced THE ULTIMATE BATMAN READING AND VIEWING GUIDE, which lays out every single story voted on by our panelists — resulting in a comprehensive slate of more than 100 selections. (Click here.)

And that’s where Ken Holtzhouser comes in. Ken, a cartoonist, pitched me on the idea of defending the indefensible — the 1997 dud that’s long been the low bar in Batmandom.

Who was I to say no?

So, as a coda to our celebration, here’s Ken, with 13 QUICK THOUGHTS: IN DEFENSE OF BATMAN & ROBIN: 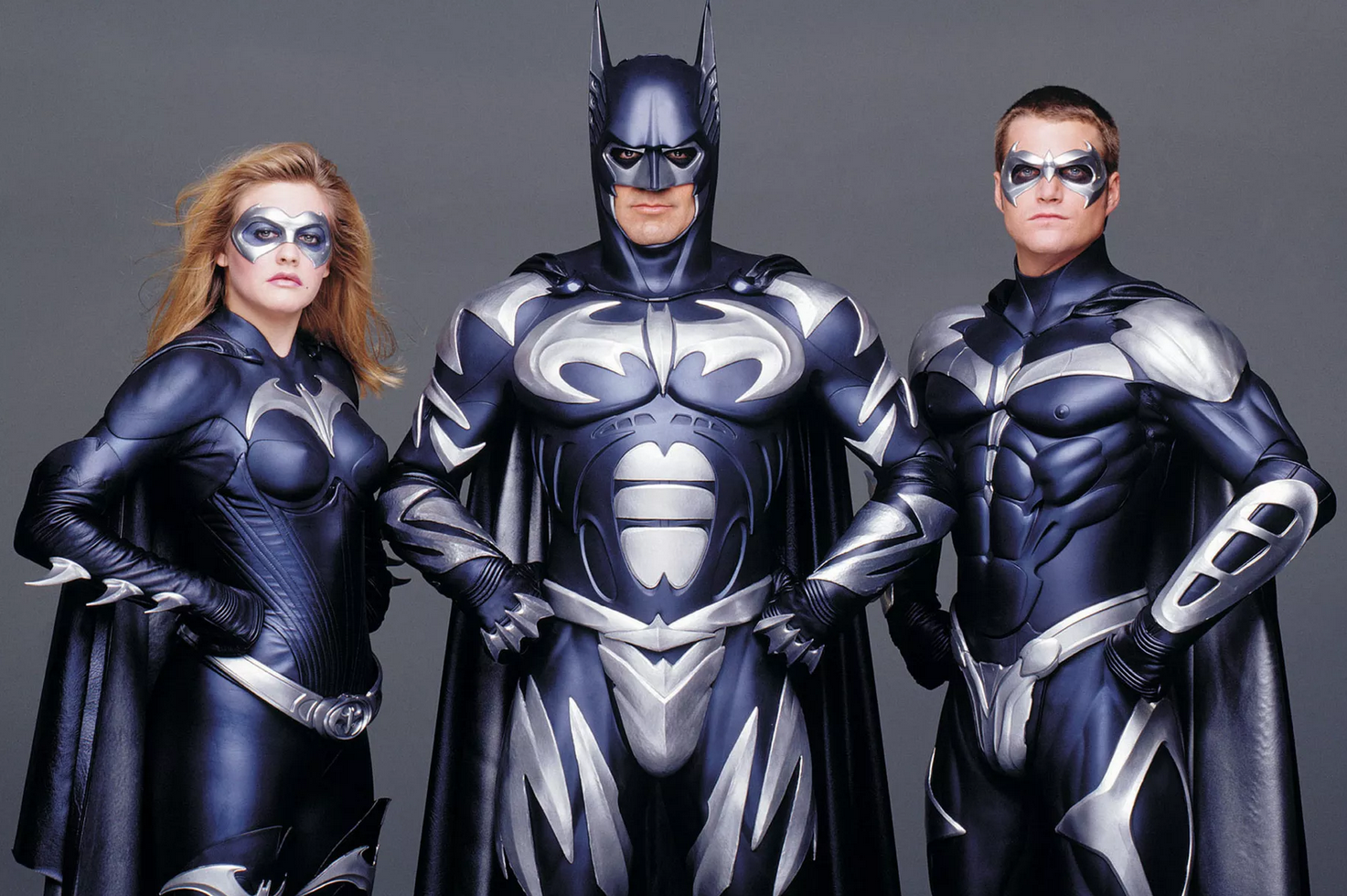 It’s certainly no secret that fandom harbors a … negative opinion of 1997’s Batman & Robin, the fourth film in the lucrative Burton/Schumacher film franchise. There’s a lot to criticize about the movie and heaven knows that I’ve done my fair share of Bat-bellyaching over the years, but for Batman’s 80th anniversary I think we should make every effort to find the good in all facets of the Caped Crusader’s legacy. A character doesn’t endure for eight decades (and counting) without a few missteps along the way, after all.

In that spirit, I will put aside my regular complaints involving poor casting, toy decisions over script decisions, wretched performances and cotton-candy gorilla suits:

1. The Elliot Goldenthal Batman march (also used in the previous movie, Batman Forever) is a terrifically heroic piece of music. Following Danny Elfman’s iconic Bat-theme is a daunting task, but even the hardest fanboy heart soars with this theme.

2. As a longtime DC fan, I appreciate the use of a deep-cut, non-Batman villain like Dr. Jason Woodrue, the Floronic Man! John Glover’s over-the-top performance as the mad scientist is a bit of a guilty pleasure.

3. On the subject of DC continuity, I appreciate the inclusion of old-school girlfriend Julie Madison (Elle Macpherson). I also appreciate the implication that Bruce is beginning to have a non-crimefighting social life. It’s healthy.

4. While the neon-color palate of Gotham City might rub purists the wrong way, it’s ideal for HD television. The clarity of Blu-ray images makes everything pop art. Yes, even that awful pink gorilla suit. 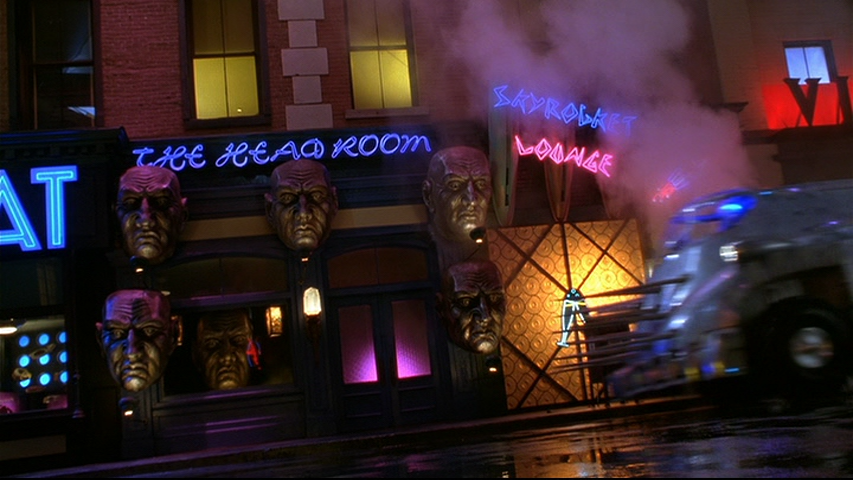 5. The fourth appearances for Michael Gough and Pat Hingle, as Alfred and Commissioner Gordon, respectively. Admittedly, they might not always have great things to do in these movies, but these veteran character actors always bring a little class to the nonsense.

6. The Batman Forever callback in Arkham Asylum. In those pre-Marvel franchise environments, any acknowledged continuity between movies was minimal. Just seeing the Riddler and Two-Face’s costumes was the ’90s equivalent of Infinity War.

7. It’s better than Superman IV when it comes to strip-mining a franchise. Admittedly, it takes almost the opposite approach. Where Superman IV tries to return the narrative to the characters and situations of the first film, Batman & Robin tries to cram as many new characters and villains into the frame as possible. (Click here for a “tribute” to Superman IV.) 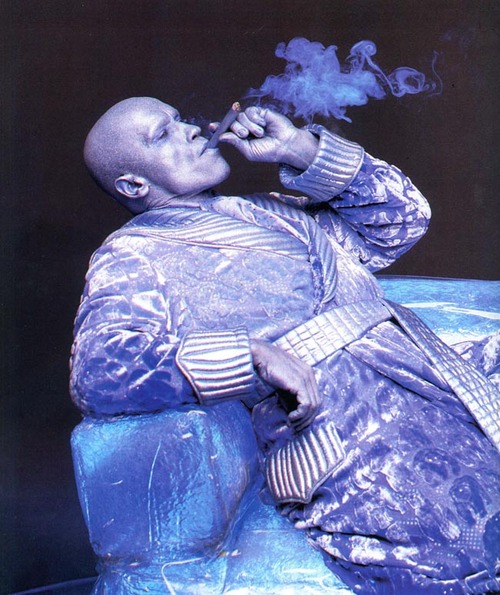 8. Mr. Freeze in his cell in Arkham is a more visually striking design than his “Buzz Lightyear” armor. The blue makeup with sparkling silver highlights? Sometimes less is more. Besides, it evokes the Batman ’66 versions of the character without being an outright copy. Vhild!!

9. Chris O’Donnell’s Robin is transitioning into Nightwing (though a better script would give the idea more prominence). The scene during a car chase where Batman remotely shuts down Dick’s motorcycle was enough of a betrayal of trust to break up the duo. This should have led to Robin rebranding himself and striking out on his own — which leads to… 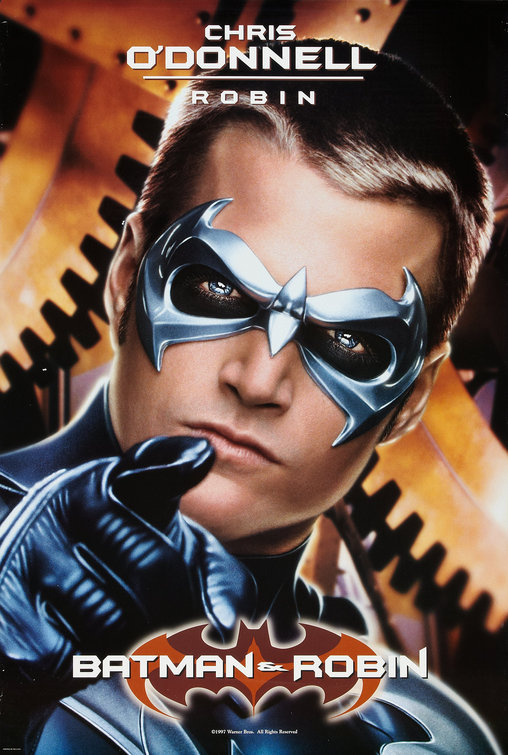 10. Batgirl is obviously intended to be a replacement for Robin. With Robin suggesting that it’s time to leave the nest, Alicia Silverstone’s Batgirl is the new squire-in-training for Batman. Sunrise, sunset. It would fit neatly into the missed-opportunity theme of the movie…

11. Bruce Wayne faced with losing his family again. Robin’s desire to leave home and the impending loss of Alfred SHOULD have given us an emotionally vulnerable Batman, comparing the slow dissolution of his new family to the sudden loss of his old one. There’s glimpses of this idea and they give us a new emotional dimension to Bruce Wayne. 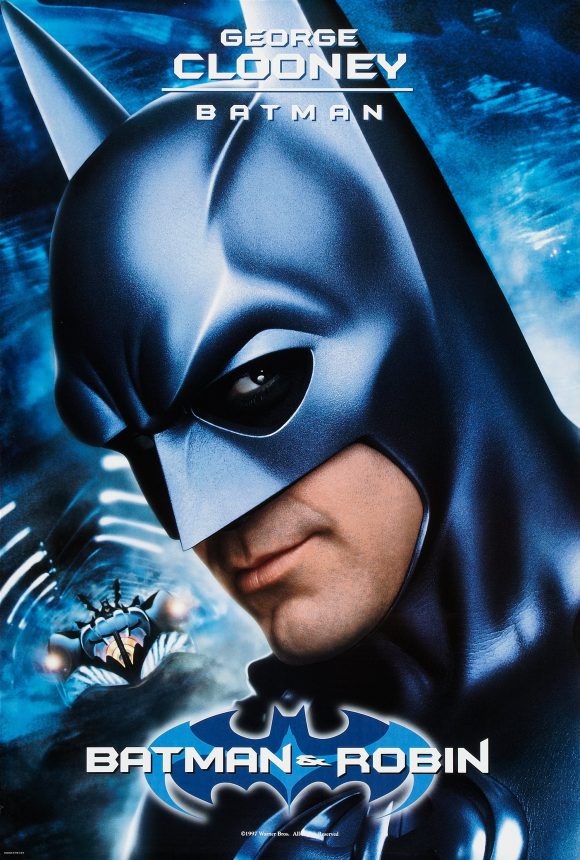 12. The decision to base the Mr. Freeze character and storyline around Paul Dini’s masterful script Heart of Ice from Batman: The Animated Series is the very best decision in the movie. We can argue forever about the execution and Arnold Schwarzenegger’s suitability in the role (imagine Jeremy Irons or Ed Harris instead), but the character is built on a solid foundation of pathos. (Click here for more on Heart of Ice, from the TOP 13 BATMAN COUNTDOWN.)

13. It offers a clear direction for future installments — away! With this stumble, the seemingly invincible franchise has to go back to the drawing board and find a way to reinvent itself. It does, nearly a decade later, with Christopher Nolan’s eventual reboot, Batman Begins. The audience had soured on over-saturated toy commercials and future Batman movies would have to offer dramatic weight and spectacle in equal measure.

And for that, we owe a begrudging thanks to Batman & Robin.

I can’t defend that credit card scene, though…