A year ago, I found a slew of terribly awesome and awesomely terrible Ben Cooper costumes on the eBay. Guest what? There’s plenty more for this year’s HALLOWEEN WEEK!

Of course, by the time you read this, some (un)lucky soul may have snapped some of these up. But as I write this, here are 13 epic disguises from the days of yore: 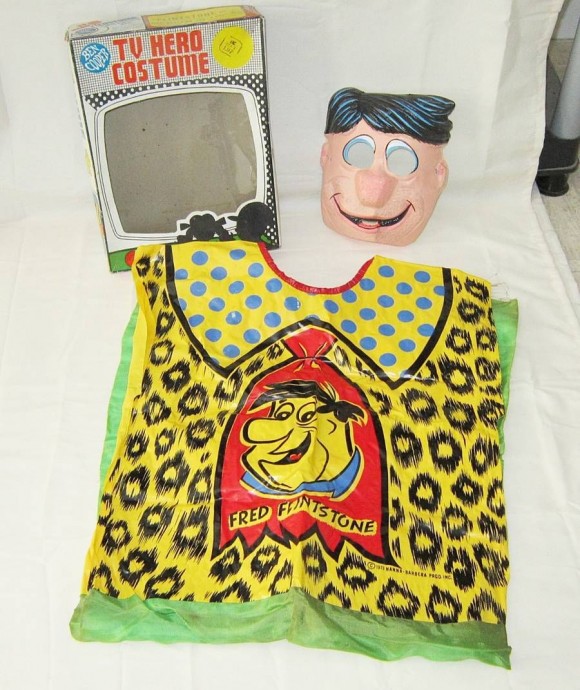 Yabba Dabba Don’t! First off the Fred mask looks like he’s had one too many down at the ol’ Water Buffalo Lodge. But what’s with that clown collar? Naturally, it has the signature Ben Cooper element: The name and face of the character prominently displayed on the chest so that clueless — or creepy — grown-ups don’t have to ask you who you are, little boy … 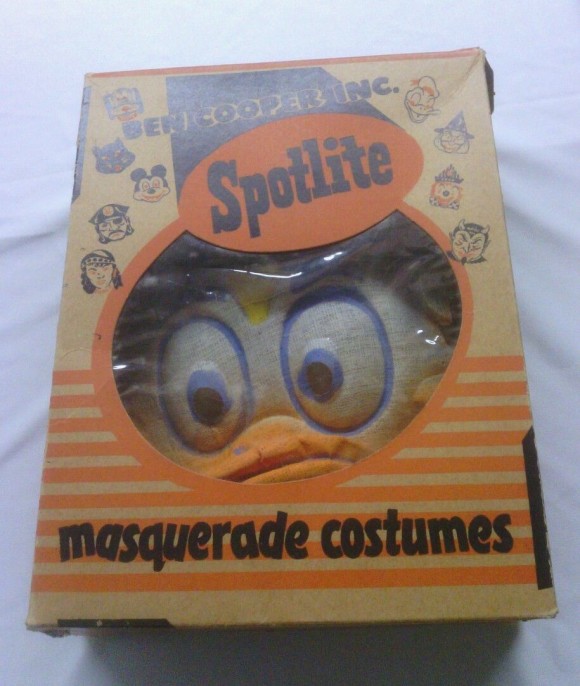 What’s in the Baaaaaahx? Good lord, Donald Duck looks like a crazed maniac peering at you with his googly eyes from the window. Not pictured: The straitjacket he’s wearing while staring into your soul. 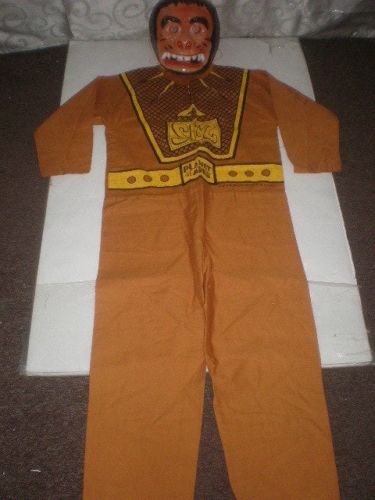 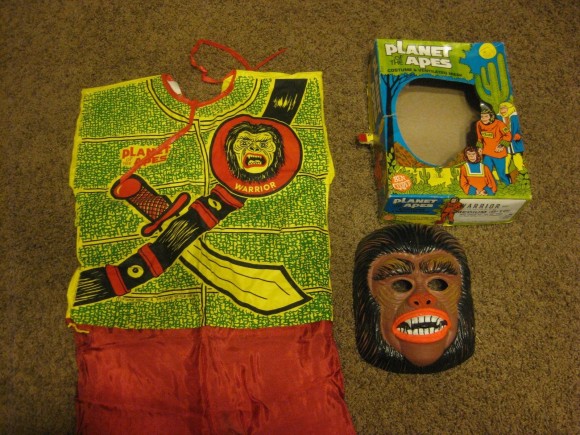 Then again … This is more like your classic Ben Cooper costume! Lime-green and yellow top! Red pants! A big ol’ emblem with an ape face that says WARRIOR. NOW you’re talking … 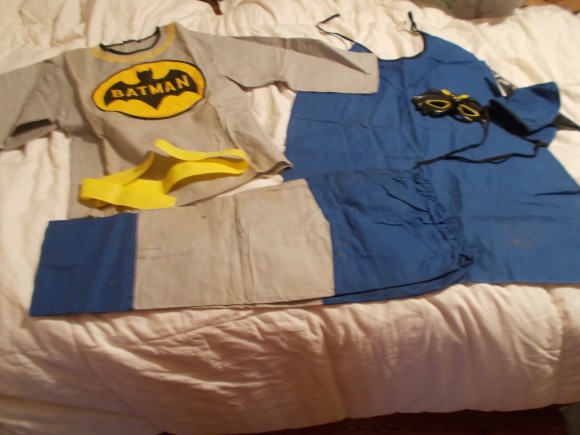 Excuse the blurry. I didn’t take the picture.

The Batgranddaddy of Them All. This is epic and one of the cloth Batman costumes that was actually pretty close, all things considered. (Note: Those Batglasses didn’t come with the costume.) I had one very similar to this one — but check out the yellow frills around the neck! Is that supposed to replicate the bottom of Adam West’s cowl — except in yellow? A mystery worthy of the Dynamic Duo! 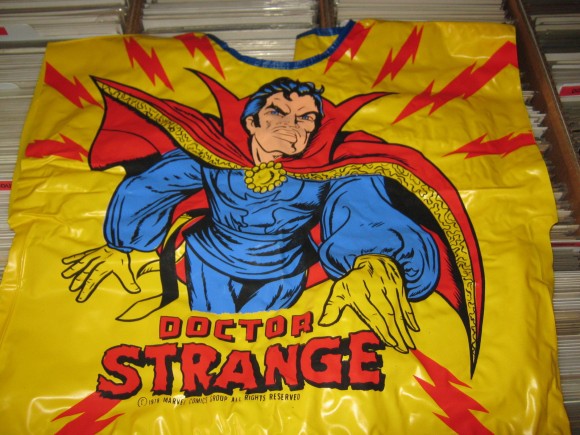 This Hurts My Eye of Agamotto! Someone needs to give ol Doc’ some Ex-Lax, no? Rather than calmly chanting some ludicrously hippie-dippie incantation, he looks like he’s about to bite the towel, doesn’t he? Yeah, I know. Toilet humor is easy. But check out the tunic! Ben Cooper just knew nobody was gonna recognize Dr. Strange on your suburban block. Fuck it, they said, just throw his whole body on there! This was a thing. I’ve noticed going through the annals of Ben Cooperdom that you’ll find the occasional ethnic costume. This Balinese dancer, for instance, which is, all things considered, a pretty attractive design. I have to think this is the influence of mid-century World’s Fair/It’s A Small World globalism because otherwise it’s pretty random for a mass-market costumer that did everything on the cheap. I kinda dig this, though through a modern prism, I’m not quite sure how culturally sensitive it is. 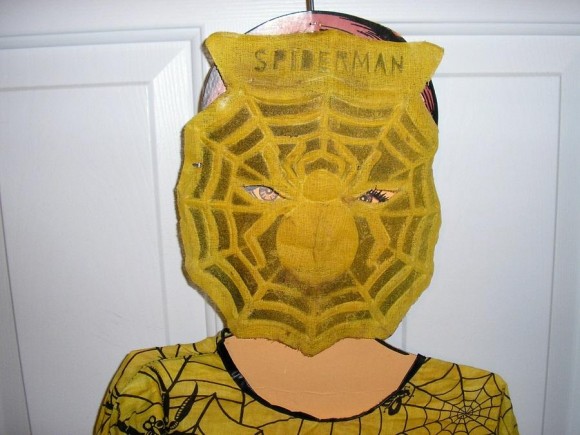 Forget Kirby or Ditko … BEN COOPER should have been pissed at Stan Lee. This Spiderman costume evidently predates ol’ Peter Parker. I mean, check out that (otherwise unsettling) mask! Look at it! If this guy doesn’t show up in Spider-Verse, Dan Slott’s doing it wrong.

Zoinks! This is one seedy Scooby outfit. Putting aside that it doesn’t even pretend to be a dog costume with the exception of the creepy mask, look at those horrendous colors. And blue pants! Shaggy looks especially dissipated. One toke over the line, kid. Carmine, take us away! Leave it to the Ben Cooper designers to monkey with one of the most simplistically elegant designs in comics. I can live with FLASH and the lightning bolt symbol on the mask because that’s not the worst affront among the many Cooper shop crimes of fashion. But what in the name of James Jesse is that costume?! It’s as if the Trickster redid the Flash’s duds to embarrass him in front of all of Central City — which come to think of it sounds like a classic Julius Schwartz cover. The New 52 Comes Calling a Little Early. On the other hand, look how incredibly restrained they were in this version of Superman. Instead of adding unnecessary color and verbiage, they took away his red trunks. The belt buckle’s a little redundant, but in the world of Ben Cooper that’s a very minor trespass. Just about as good as it gets. Let’s Roll, Kato. Green Hornet is oh-so-close to that Superman ideal. First off, that mask is outstanding. It really is good given the standards we’re dealing with here. (All of these are graded on a curve, obviously.) And check out that snazzy lapel. If only they could have reined in that emblem on the breast pocket. I do dig the monogrammed pocket square, though. 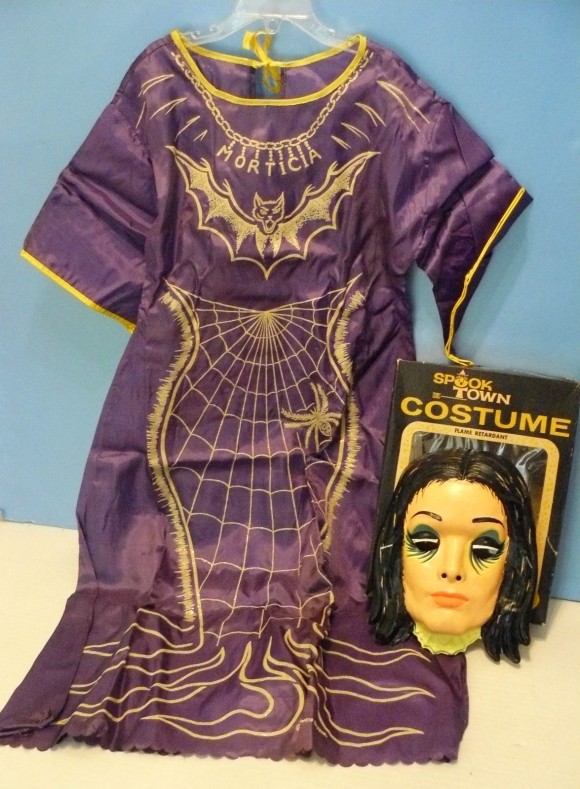 Altogether Ooky. I’m just not sure what to make of this one. Nice color scheme, kinda interesting design and incorporates Carolyn Jones’ sleek figure. But then there’s that big bat on the chest. Taking it all in, I suppose they really did have to put her name on the front. But heaven help us — THAT HIDEOUS MASK! DON’T MAKE EYE CONTACT!

Until next year, Happy Halloween, folks! Don’t forget to check the apples for razor blades and the candy buttons for acid!