From Battlestar Galactica to The Six Million Dollar Man to Space: 1999 and MORE… 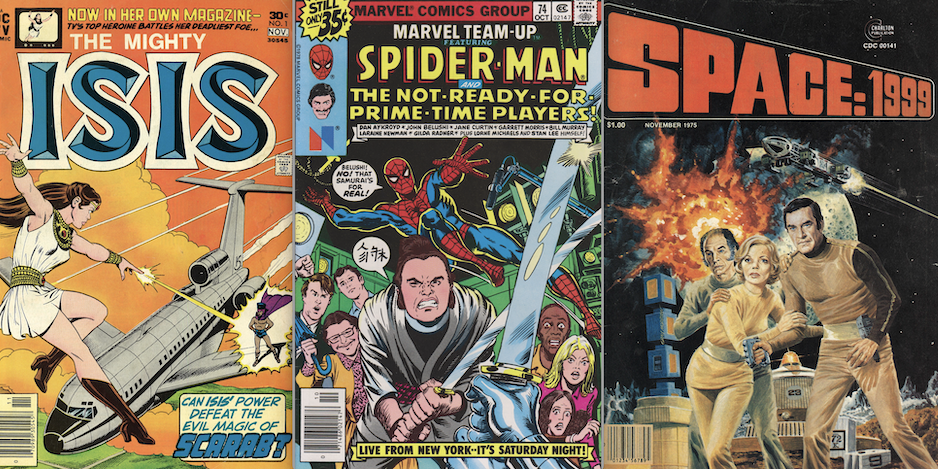 As the title suggests, the oversize trade paperback covers a very specific genre with a level of detail that brings to the fore the artistry and creativity that went into comics often sniffed at because they were licensed properties. We’re talking creators like Neal Adams, John Byrne, Joe Staton and many other comics heavyweights. 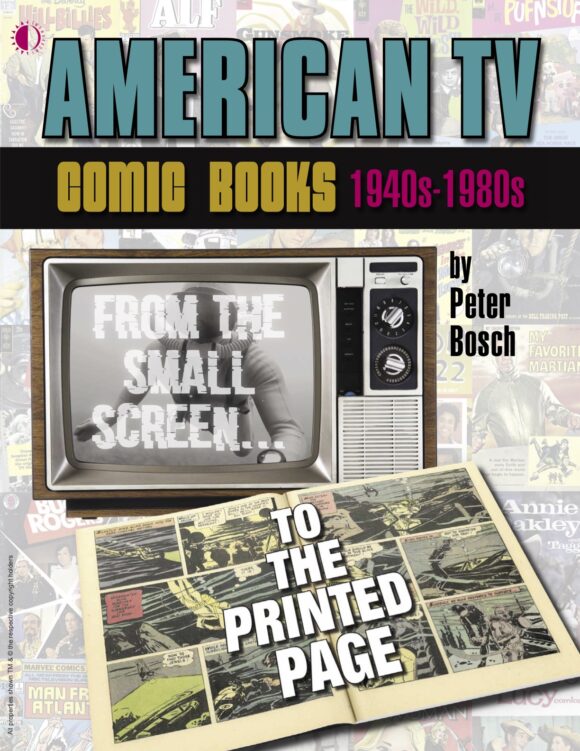 The 1970s saw Charlton, DC, and Marvel reentering the TV comics field. Here are 13 of my favorites from that decade:

Spidey Super Stories #2 (Nov. 1974, Marvel). During the 1970s, the PBS children’s show The Electric Company added a live-action Spider-Man to its cast. He never spoke aloud, only in comic book word balloons. He appeared in short spots on the series, but it was a great promotion for Marvel Comics. And Marvel endorsed the show in return through a 57-issue comic book series from 1974 to 1982 called Spidey Super Stories, in which Spider-Man fought villains while interacting with The Electric Company television characters. In this particular issue, Spidey teams up with Jennifer of the Jungle (played by the wonderfully funny Judy Graubart). (Click here for a cool interview with Electric Company Spidey Danny Seagren. — Dan) 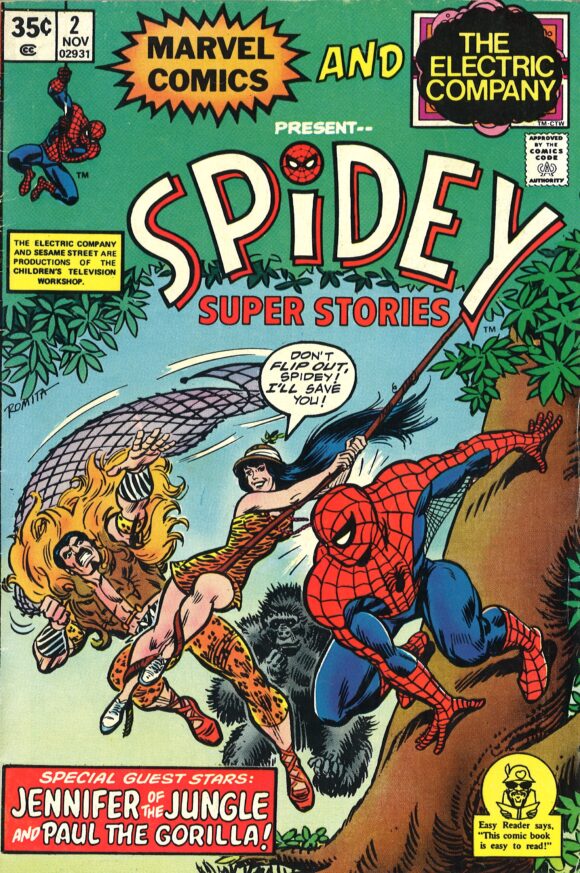 Korg: 70,000 B.C #1 (May 1975, Charlton). While Hanna-Barbera had struck paydirt in the 1960s with The Flintstones, they did not fare well with Korg: 70,000 B.C., a live-action series about another Stone Age family. The ABC Saturday-morning drama lasted only 19 episodes, from September 7, 1974, to August 30, 1975, but the nine-issue Charlton comic book series tie-in continued through most of 1976. The title’s artist, Pat Boyette, had a varied career in comics, drawing war, science-fiction, superhero, Western, and horror stories, and his Korg: 70,000 B.C. was a perfect match of art style and subject. 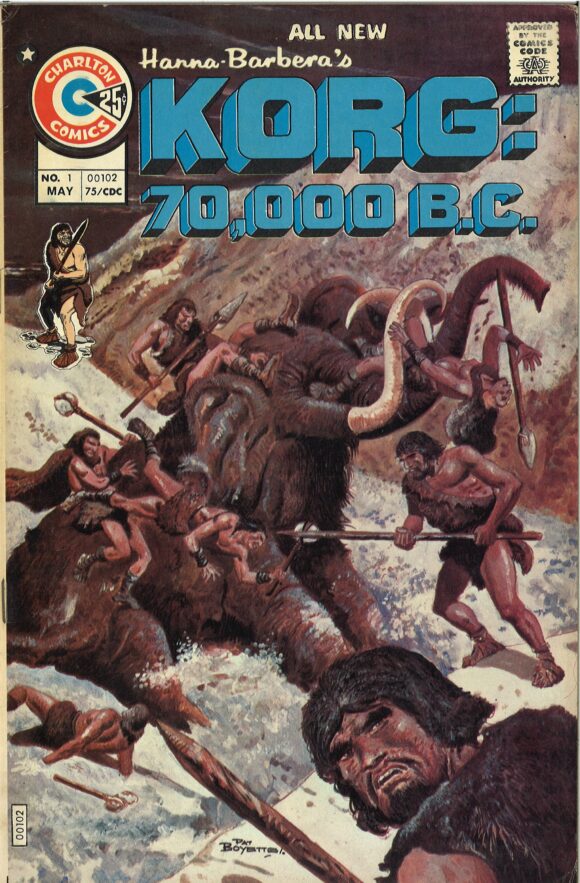 Space: 1999 magazine #1 (Nov. 1975, Charlton). Charlton Publications created both a regular seven-issue comic book title based on the science-fiction TV series, as well as an eight-issue magazine with comic-illustrated stories. Each format had different stories and different artists. 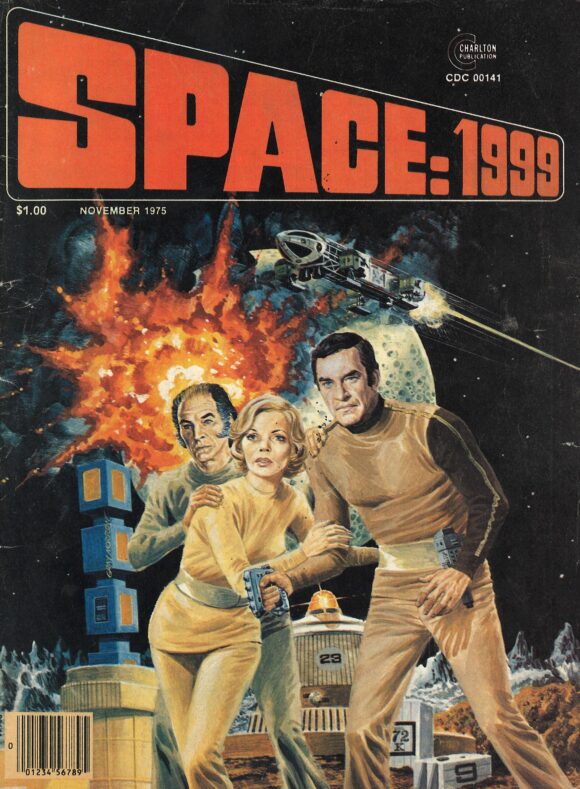 The comic book was drawn in different issues by Joe Staton, John Byrne, and Pat Boyette, while Gray Morrow worked on the black-and-white magazine. 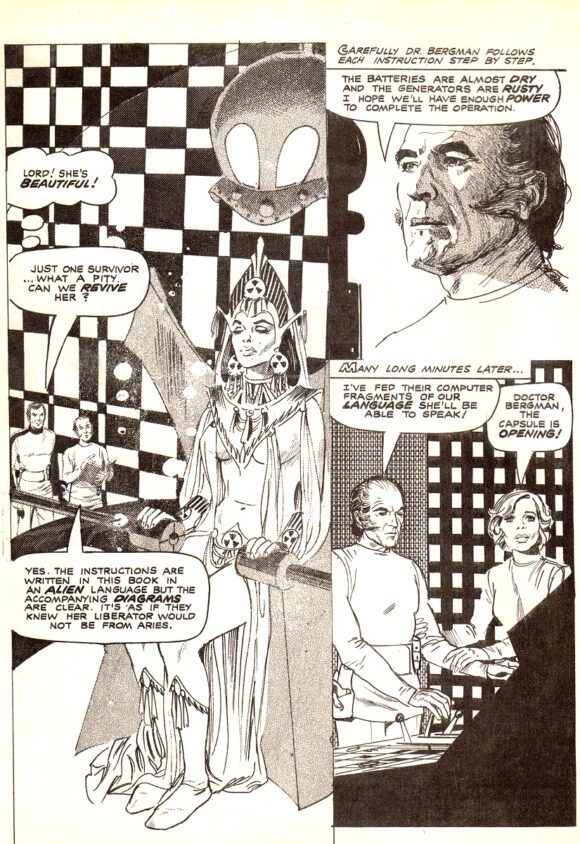 Emergency! (comic book #1, June 1976; and magazine #1, July 1976, Charlton). The TV series Emergency! (1972 to 1977) focused on the fictional interaction between L.A. firemen and the medical staff of a hospital’s emergency section. Just as Charlton did with Space: 1999, Charlton published both a comic book series as well as a black-and-white, comic-illustrated magazine. 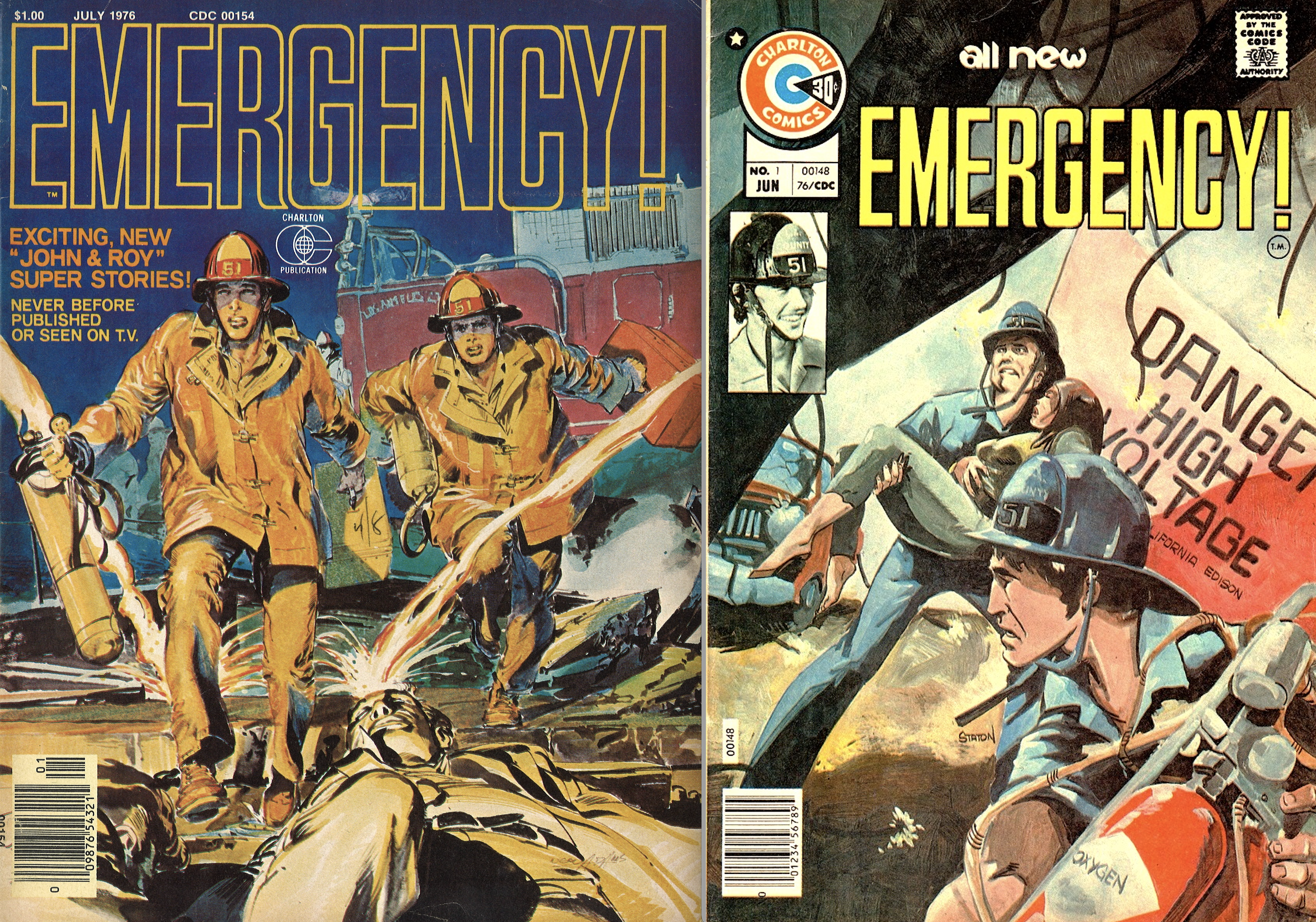 The comic book’s first issue had early art by John Byrne, while Neal Adams and his Continuity Associates team provided exceptional work for the magazines. (Note from Dan: Counts as two selections.) Isis #1 (Oct.-Nov. 1976, DC). A year after the live-action series Shazam! debuted on CBS, the network added a new female superhero to its Saturday morning lineup. Isis had high school teacher Andrea Thomas (played by Joanna Cameron) visiting Egypt where she finds an ancient amulet that allows her to channel the power of the goddess Isis. CBS combined the two shows as The Shazam!/Isis Hour. While DC Comics barely capitalized on the TV series Shazam!, they did create an Isis eight-issue comic book title. This first issue featured a Dennis O’Neil story with Wally Wood inking Ric Estrada’s pencils. 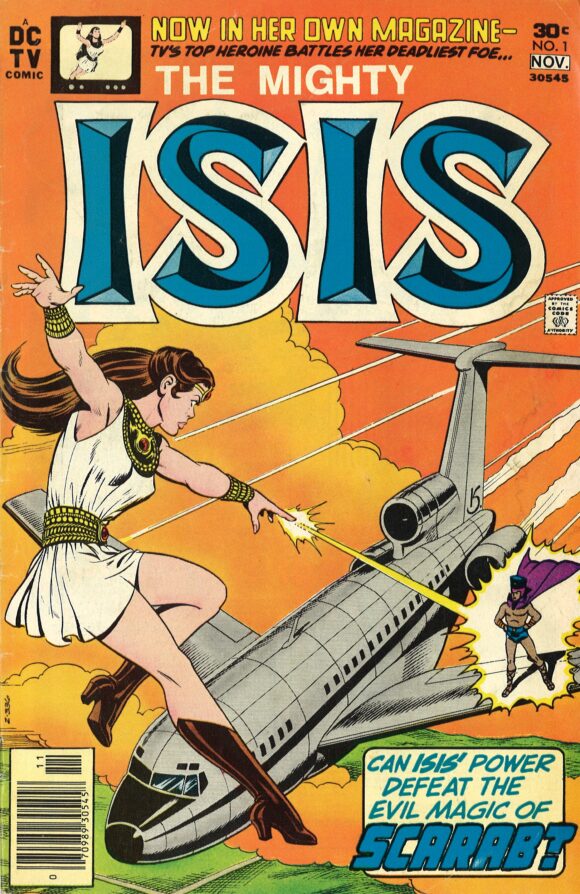 Star Trek #41 (Nov. 1976, Gold Key). The first Star Trek comic book based on the original TV series was published by Gold Key in 1967. Though the earliest issues were not precise to the program’s particulars, the comic series got better when artist Alden McWilliams came aboard. McWilliams had drawn the 1952 Tom Corbett, Space Cadet TV comic book tie-ins, as well as the sci-fi newspaper strip Twin Earths, and his exceptional art was perfect for Star Trek. 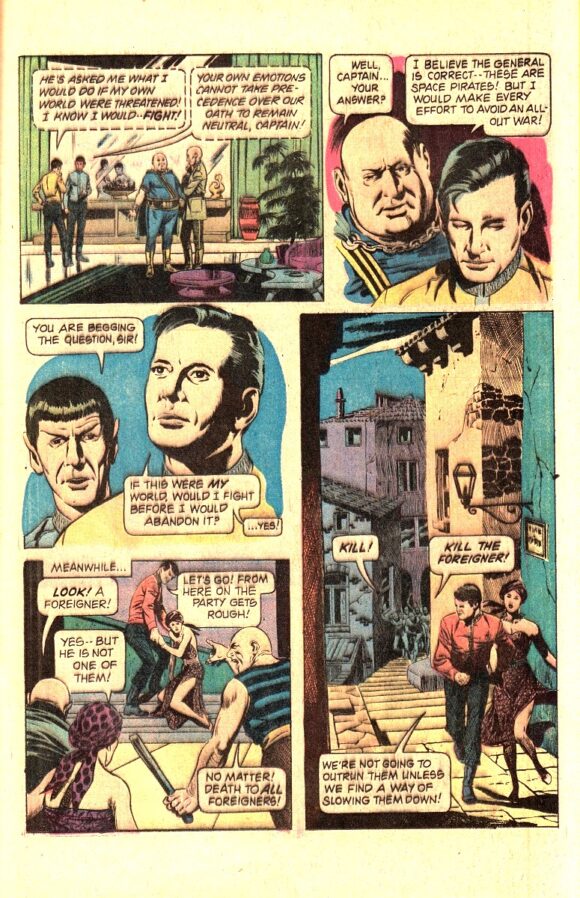 The Six Million Dollar Man magazine #3 (Nov. 1976, Charlton). Charlton was back with yet another comic book and magazine published concurrently. While Neal Adams and Joe Staton drew the adventures of Steve Austin for the comic, the best work was by Jack Sparling for the third issue of the magazine in a story of an old prospector, his beautiful great-granddaughter, bandits, and a WW I biplane named Daisy. 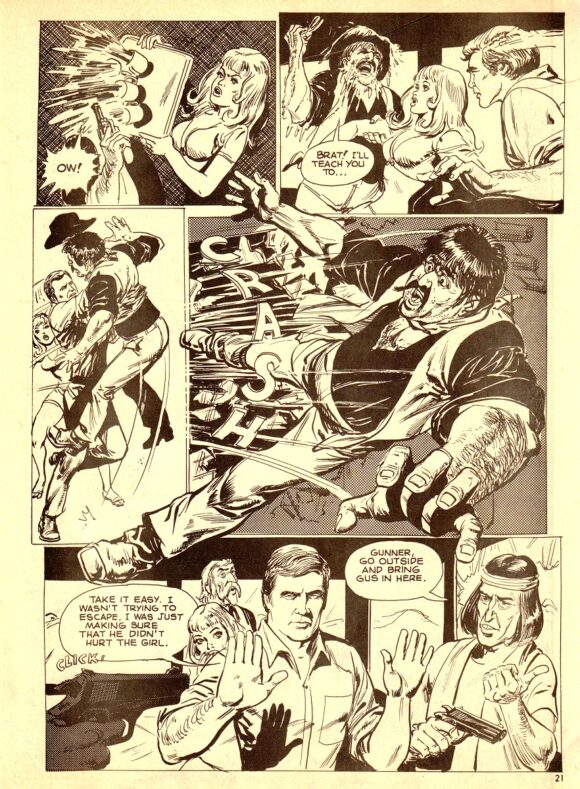 Man from Atlantis #1 (Feb. 1978, Marvel). Washed ashore, a man (Patrick Duffy) suffering from amnesia is believed to be from beneath the sea due to his webbed hands and feet, as well as his great powers underwater. The Man from Atlantis series began as an NBC TV-movie in 1977 and then NBC produced three more TV-movies that year before giving approval for a regular series. Marvel published a seven-issue comic book title, with this first issue being the best. Bill Mantlo handled the scripting and art was initially by Tom Sutton and Sonny Trinidad, and then given over to Frank Robbins. The first issue also had three “pin-up” art pages by Gene Colan, Joe Sinnott and Mike Zeck, as well as photo-and-text articles about the TV series. 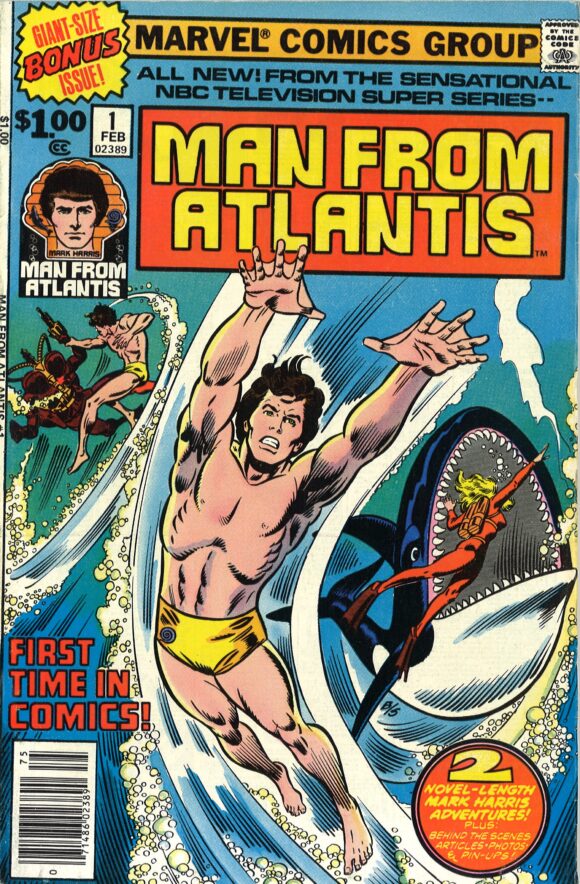 The Bionic Woman #3 (Mar. 1978, Charlton). The spinoff of The Six Million Dollar Man also got a comic book from Charlton, but this time with a comic book only, and they assigned Jack Sparling to the five-issue title. Sparling’s work on the title was good, particularly in the third issue when Jaime had to outrun a raging forest fire. Marvel Team-Up #74 (Oct. 1978, Marvel). A definitely silly but fun issue that features Stan Lee as the host of an episode of Saturday Night Live. In the audience, Peter Parker and Mary Jane Watson watch until Spider-Man has to take action when the villainous Silver Samurai goes after John Belushi to obtain a ring he had been sent mysteriously. (Beatles fans will recognize that as the plot of their second movie, Help!) 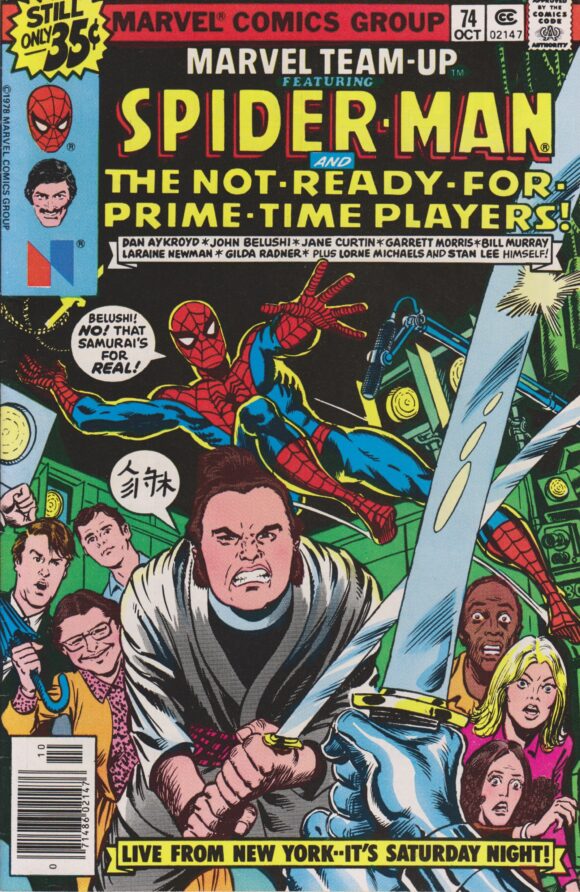 Buck Rogers in the 25th Century #3 (Sept. 1979, Gold Key). Another science-fiction TV property blessed by Alden McWilliams art, this was the second of three issues that adapted the original pilot starring Gil Gerard. (The other chapters were drawn by Frank Bolle and Jose Delbo.) 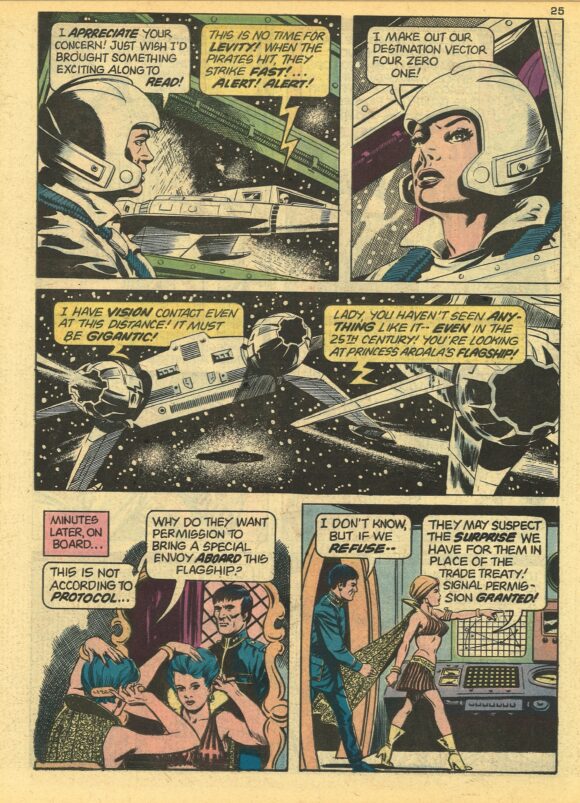 Marvel Super Special #8 (Oct. 1978, Marvel). The original Battlestar Galactica series lasted just one season, from September 17, 1978, to April 29, 1979, but Marvel Comics’ comic book title outlasted the first TV series by almost two years. After Marvel Super Special #8, which adapted the pilot, they published 23 issues of the regular Battlestar Galactica title. Ernie Colon’s work for the MSS adaptation was excellent and he redrew it in a simplified version for the first three issues of the regular comic series.