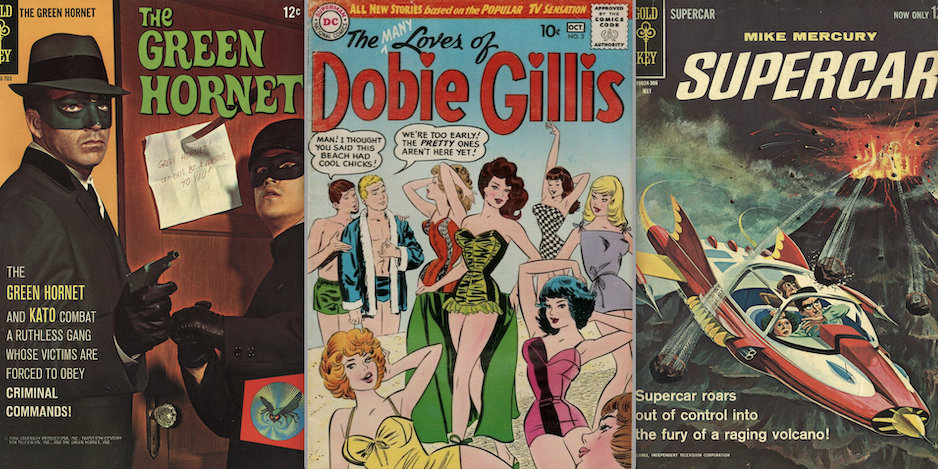 As the title suggests, the oversize trade paperback covers a very specific genre with a level of detail that brings to the fore the artistry and creativity that went into comics often sniffed at because they were licensed properties. We’re talking creators like Alex Toth, John Buscema, Russ Manning and many other comics heavyweights. Anyway, with the book due out April 20, we’ve invited Peter to put together a swingin’ gallery of 13 GROOVY TELEVISION COMIC BOOKS OF THE 1960s, complete with commentary. Oh, and next week, we’ll bring you a second feature on the ’70s! (UPDATED: And here it is!)

Comic books based on television shows have been around since 1949 and have been a favorite of mine since I first watched TV as a kid. I was born in the mid-1950s, not long after TV became a staple in everyone’s living room, and many of my fondest memories as a child of the Sixties were that decade’s great TV shows. At the same time, I also developed a second love in my life… comic books! And how delighted was I when I discovered on the comic rack that the two combined into one.

Below are 13 TV comics from that period. Some are fond memories of a happy child. The rest are looked at now with an adult’s appreciation of the artists in them: 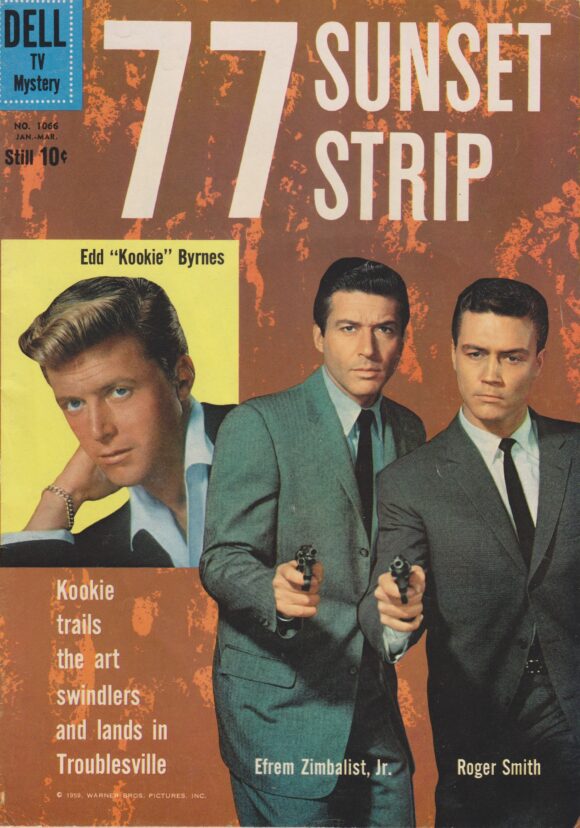 Dell Comics’ first 77 Sunset Strip issue tying in to the show was dated January-March 1960 and such was Byrnes’ popularity that a photo of him appeared prominently alongside Zimbalist and Smith on its cover. (He was also on all of the six Dell comics covers after that, as well as two Gold Key issues). What makes this issue special is Alex Toth’s art, a delight from beginning to end. Toth even got to draw Kookie holding off a villain with a bit of swordplay a la Zorro, Toth’s comic masterpiece from a few years earlier. 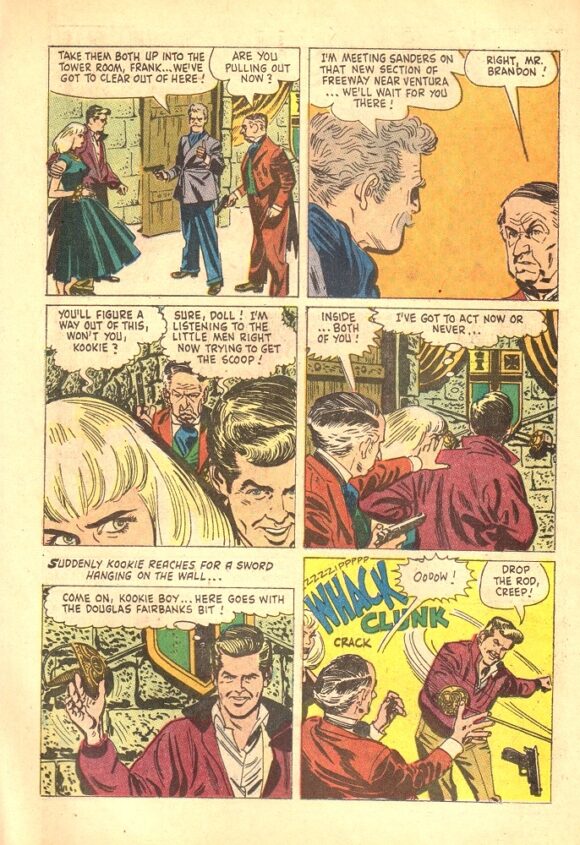 The Deputy (Four Color #1077, Feb.-Apr. 1960, Dell). Prior to his great Marvel superhero work, John Buscema drew several TV and movie comic book adaptations, including this great issue of The Deputy from Dell Comics, based on a 1959-61 NBC television series starring Henry Fonda and Allen Case. Buscema’s art here and on the second Four Color issue of The Deputy (#1170) was strong, a forerunner of his superb art on The Avengers and other titles. 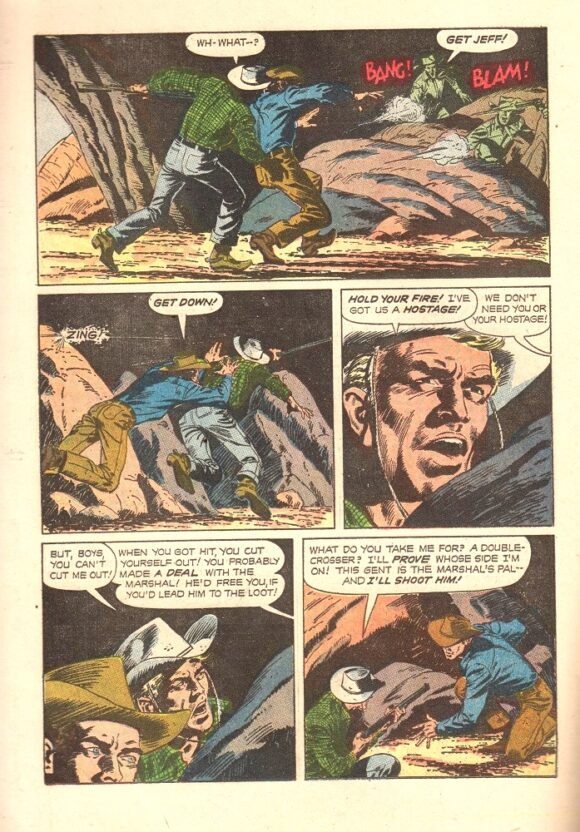 Peter Gunn (Four Color #1087, Apr.-June 1960, Dell). A great Henry Mancini jazz theme introduced one of the greatest private eye series on television, Peter Gunn, starring Craig Stevens. Despite the popularity of the series (it aired for three seasons, from 1958 to 1961), Dell only released one comic issue based on it. However, artist Mike Sekowsky delivered a one-two punch, with heavy-duty action sequences and excellent representations of the lead actors in it. (Sekowsky had experience in this field, before and after Peter Gunn, drawing TV-based comic books such as The Rebel, Gunsmoke and The Man from U.N.C.L.E.) 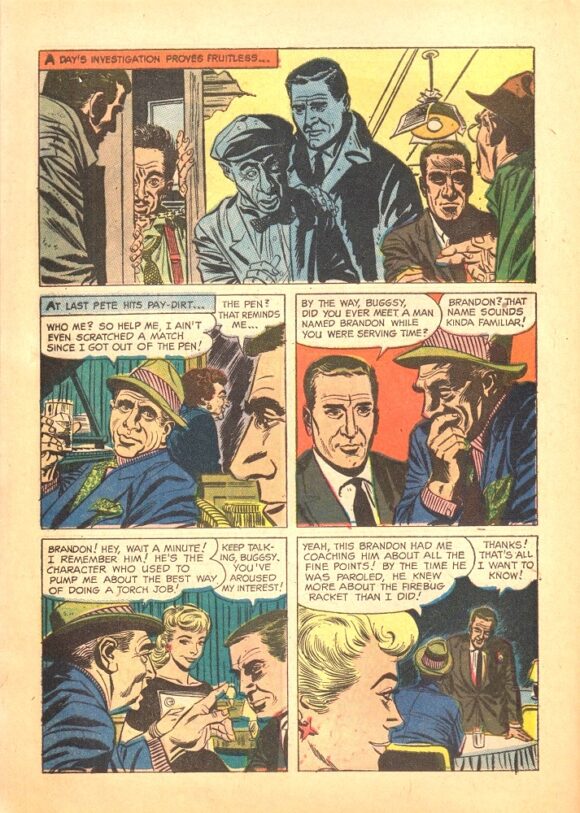 The Many Loves of Dobie Gillis #3 (Sept.-Oct. 1960, DC). One of the most popular sitcoms of the late 1950s and early 1960s was CBS’ The Many Loves of Dobie Gillis, with Dwayne Hickman as the girl-happy Dobie and Bob Denver as his beatnik buddy, Maynard G. Krebs. DC Comics was quick to license the series for comics and the first issue (May-June 1960) featured a cover with Dobie in front of Rodin’s “The Thinker” statue, a regular stop for him on the show to discuss with the television viewers his current frustration, usually women. The comic book series featured Dobie with so many new female loves that only one artist could do them all justice and that was Bob Oksner. The women he drew were not just beautiful, they were dazzling heartstoppers. Laramie (Four Color #1284, Feb.-Apr. 1962, Dell). The stories on the Laramie television series from NBC usually revolved in or around the farm that served as the temporary stopover for stagecoach passengers. 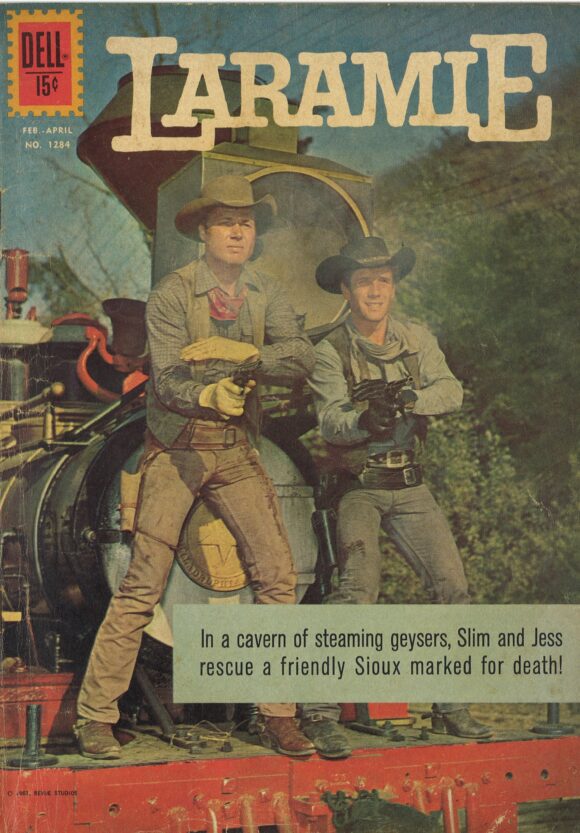 Dell’s comic tie-in to the program, which starred John Smith and Robert Fuller, featured four issues (mostly within the fold of Dell’s Four Color title) that contained excellent art by Gil Kane and Jack Sparling but this issue was the finest, with some of Russ Heath’s most striking Western comics art ever. 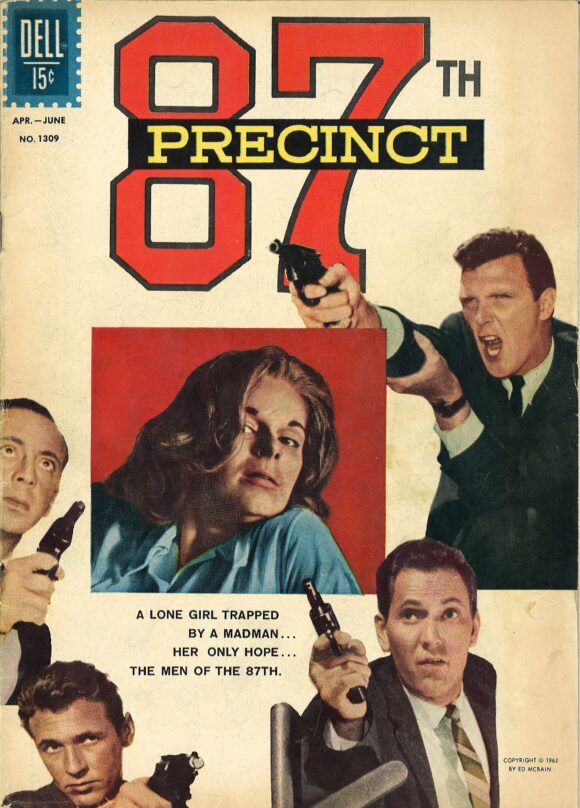 Dell published two issues, but the first issue was the real standout because it featured Bernie Krigstein’s final comic book art — and he went out with a tale of an insane artist who murdered his subjects. That the artist was also blind led to some of the wildest art Krigstein ever committed to comic book pages. Ben Casey Film Stories #1 (1962, Gold Key). This Gold Key issue has a unique place among 1960s comic books because it was the only television tie-in issue at that time to feature TV-film frames laid out in comic book fashion instead of drawings. 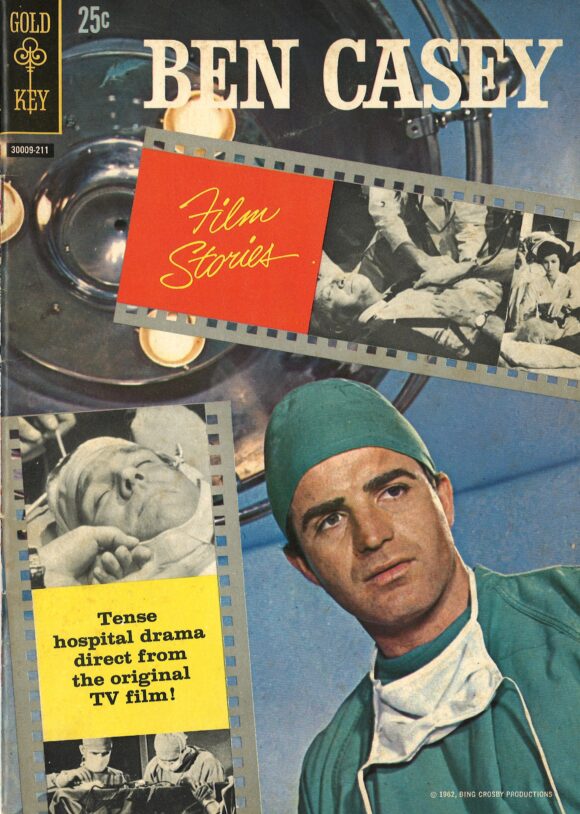 The photo comic adapted two episodes from the television program starring Vince Edwards, but it was an experiment that did not succeed. Gold Key was going to do a similar issue for “Gunsmoke” but it was never published. Supercar #3 (May 1963, Gold Key). This was likely the earliest TV comic I purchased when I was very young, so it has always had a warm spot in my heart. Supercar was the first marionette adventure TV series by England’s Gerry Anderson and featured test pilot Mike Mercury and his friends using the amazing vehicle of the title to help people and defeat bad guys. The four-issue series from Gold Key was an excellent adaptation of the look of the TV program. My Favorite Martian #1 (Jan. 1964, Gold Key). Russ Manning was assigned to draw the first of nine Gold Key comics based on the My Favorite Martian TV sitcom. It was an unusual choice considering Manning was great at drawing dramatic TV adaptations such as Sea Hunt, Rawhide, and 77 Sunset Strip for Dell and Gold Key. 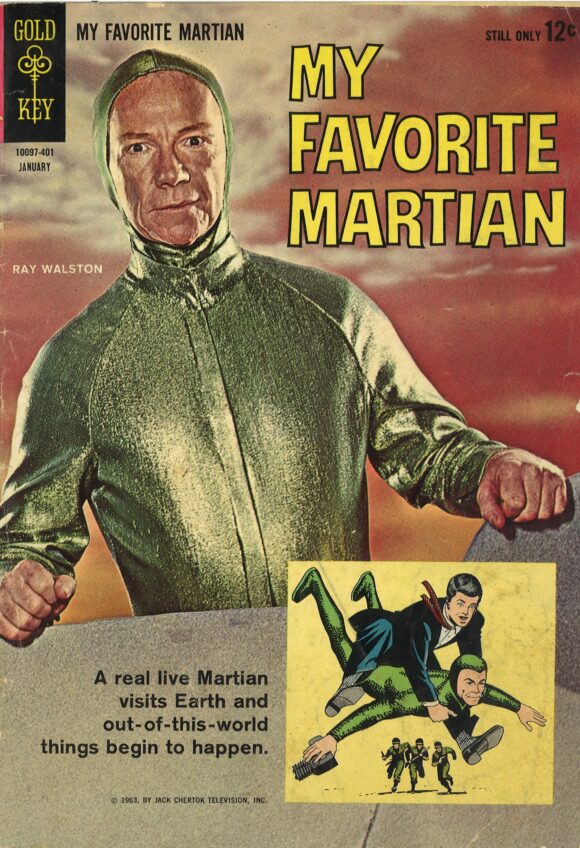 However, with this, he also proved he could draw comedy in the retelling of the first TV episode with reporter Tim O’Hara (Bill Bixby) helping a Martian (Ray Walston) after his spaceship crashed on Earth. Dan Spiegle did a masterful job drawing the 32-page story set in 18th-century England. Gold Key, Disney, and Spiegle followed up with two more issues in 1965, with the title reduced to The Scarecrow and including original stories. Wagon Train #4 (Oct. 1964, Gold Key). The long-running TV series (1957-1965) about wagon masters taking homesteaders West led to a comic book tie-in of 13 issues from Dell Comics between 1958 to 1962.  However, the artwork for the issues could have been much better. In 1964, Western Publishing began a new Wagon Train tie-in series under their Gold Key imprint and they brought in Warren Tufts, a masterful artist whose experience included writing and drawing the Western newspaper comic strip Casey Ruggles for nearly seven years, as well as illustrating comic book versions of the TV shows Zorro, Rawhide, and The Rifleman. The new comic series was exceptional and worthy of the television program. Action Comics #345 (Jan. 1967, DC). Candid Camera was one of the funniest television programs of the Fifties, Sixties, and Seventies. Host Allen Funt had outrageous gags secretly set up in public to see how the ordinary citizen would react to them. It led to a lot of good-hearted hilarity for the home viewer, and a secret desire to one day have Funt say to them, “Smile, you’re on Candid Camera.” Action Comics #345 was a silly tie-in, but it was fun at the same time. The Green Hornet #1 (Feb. 1967, Gold Key). The Green Hornet TV series made its debut on ABC in 1966 and had several things in its favor. It was played seriously (as opposed to its sister program Batman), had a good cast of Van Williams as Britt Reid/Green Hornet and Bruce Lee as Kato, a great car (the Black Beauty), and Al Hirt playing a jazzed-up “Flight of the Bumblebee.” Unfortunately, it failed in the ratings and was yanked after just one season. On the plus side, the three-issue Gold Key series published during that time was wonderfully drawn by Dan Spiegle, with plenty of action sequences and nighttime scenes in the first issue, bringing over the feeling of the television program. (Each of the three issues also had excellent photos of Van Williams and Bruce Lee on the covers.)