TOYHEM! Diving deep into a catalog of wonders…

The thing about running 13th Dimension is that I sometimes (often, really) have ideas for stories that I really want to do but just don’t have the time. So, there are few things more satisfying than asking a member of our network of contributors if they want to take a crack at it — and have it come in far better than I could have done it myself.

I loved the Heroes World catalogs of the ’70s and have a handful of them today, including those with alternative names like The Superhero Book. But it turns out so did 13th Dimension regular Chris Franklin — and so here are his wonderfully curated 13 GROOVY HEROES WORLD CATALOG PAGES — RANKED: 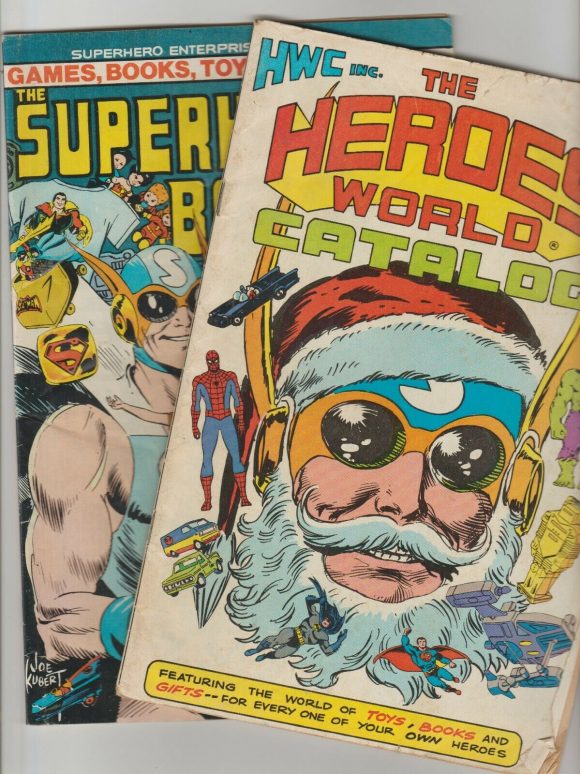 No comics-reading kid of the ’70s can forget those wonderful Heroes World ads, hawking the latest in comics-related merchandise.

From Megos to bed sheets, belt buckles to pajamas, Heroes World carried anything a young fan could wish for. In addition to the ads they ran regularly in DC and Marvel Comics, Ivan Snyder’s New Jersey-based retail company also produced full color, comics-sized catalogs that were available via mail order or in one of their local stores.

Now, unfortunately, I never knew of these wondrous catalogs until Heroes World’s omnipresence was long gone, finding my first one among some random back issues at a flea market in the late ’80s.

But thanks to the internet, and sites like Forces of Geek, TheSuperHeroShop.com, and MegoMuseum.com (which I contributed catalog scans to) – not to mention 13th Dimension itself — we all can now (ahem) marvel at these wonderfully crafted, mostly hand-drawn recreations of some of the greatest superhero products ever produced. 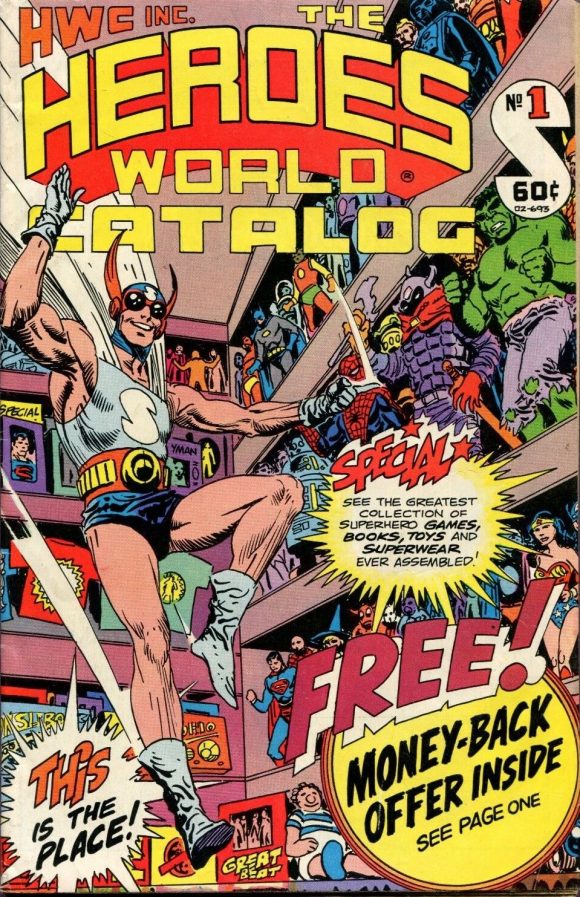 On top of all that, the artwork was provided by the Joe Kubert School of Cartoon and Graphic Art, and you’ll see the master’s hand in a lot of these pieces as well.

This time, we’re focusing on just the superhero-related material, so sorry fans of Stars both Wars and Trek.

Maybe we’ll do a sequel.

13. From a 1976 catalog comes this diverse page showcasing a Superman bean bag (I had a Super Friends one, myself) and Janex’s Batman talking alarm clock. I was lucky enough to own this wonderful item, finally receiving it one Christmas after coveting it for what seemed like years from the glass display case at Lee’s Drugstore. 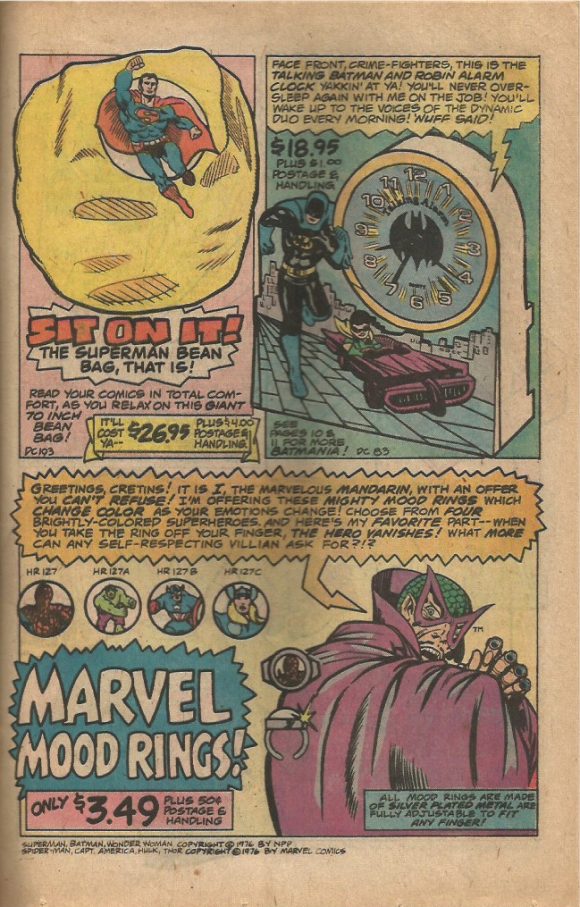 Even though my clock hasn’t worked in years, I can still hear the final exchange from the Dynamic Duo as they stirred their fans to action every morning.

And below that… a ’60s-era Jack Kirby-drawn Mandarin pitching Marvel mood rings! This shows how Heroes World could pull some pretty obscure artwork and build a whole ad around it!

Just too fun not to include here.

12. What kid didn’t want superhero pajamas? I know I had many a pair, and still wear geeky “lounge pants” to this day. Here, Heroes World bypasses the Kubert School art and reproduces John Romita Spider-Man and Captain America artwork, and Neal Adams-drawn Batman and Shazam!, etc. 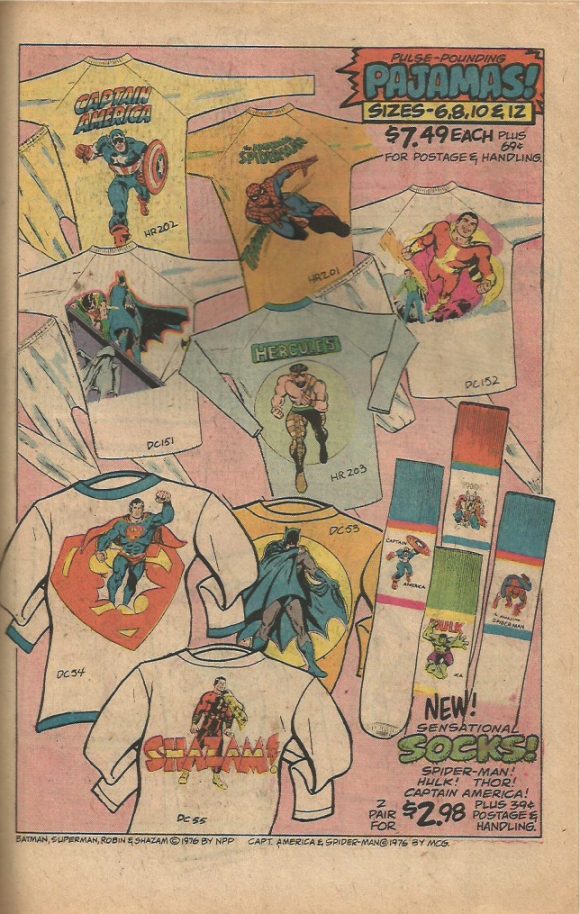 But the biggest shocker of them all is … a Jack Kirby/Vince Colletta Hercules!? They made PJs of Marvel’s Hercules?! Why? The mind boggles. But considering this page contains artwork from some of comics’ biggest legends… who’s complaining?

11. From a 1979 catalog comes our first page of Mego products, but definitely not our last. Here, we see the latter day 12-inch and Die-Cast superhero figures offered. Aside from the Superman and Wonder Woman supporting cast, the artwork doesn’t represent the toyetic quality of the items much.

Instead, it’s seemingly Marvel and DC heroes just mingling together. I do still wonder how the Magnetic Batman and Robin made it to stores when Mego’s planned Magnetic Spider-Man got scrapped. 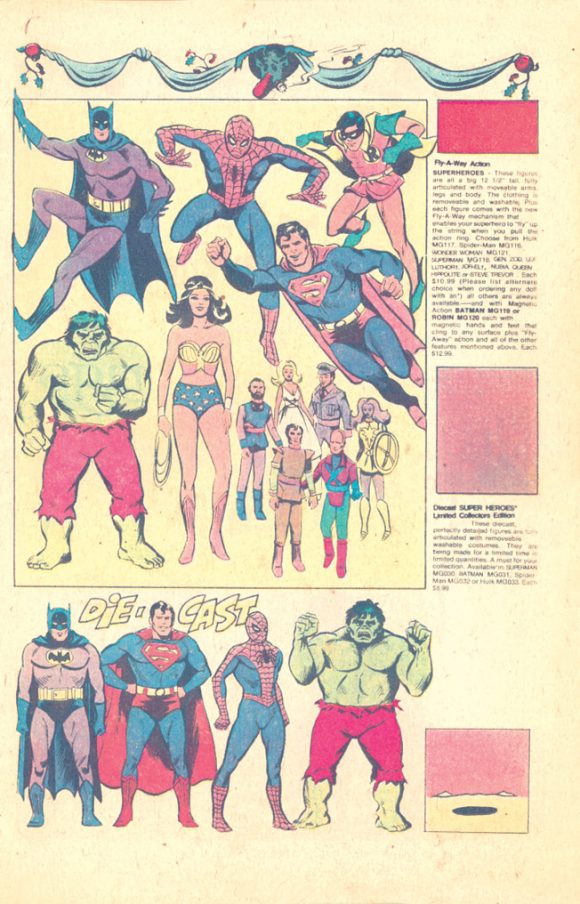 10. Heroes World wasn’t just toys. They actually sold comic books as well, and I recall seeing ads in my comics like this, offering nearly every tabloid-sized treasury DC had produced. Sure, the price has been bumped up to $2, but it still seems to be a steal. Plus, you can get DC’s in-house fanzine, The Amazing World of DC Comics. 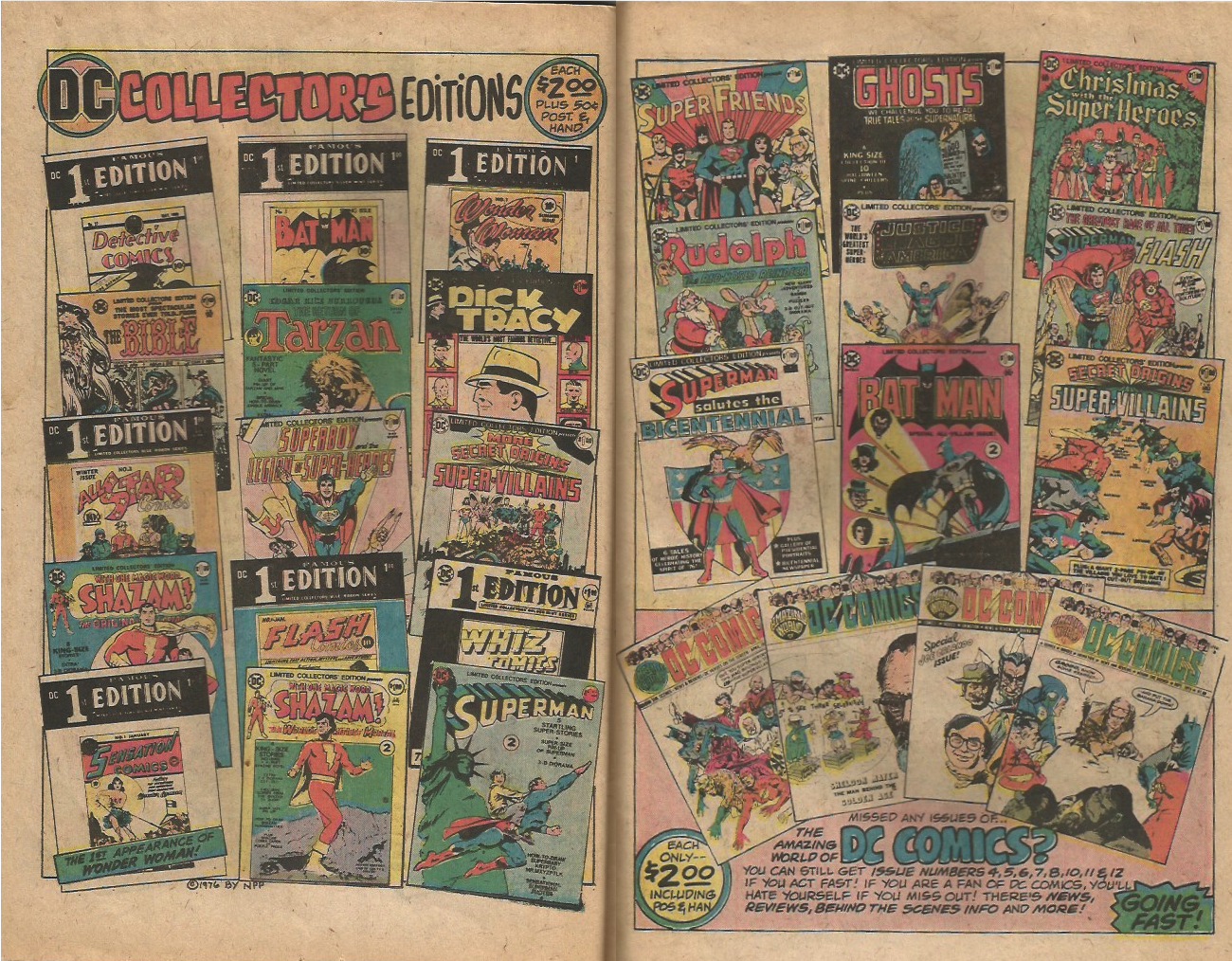 I had to include this spread for my pal — and fellow 13th Dimension contributor — Rob Kelly, host of TreasuryCast, (who, as it happens, has written about these catalogs before!)

9. Speaking of podcasts, the aforementioned Mr. Kelly and I host the Power Records Podcast, so of course I’m going to make note of this page from the 1976 catalog showcasing all the comic-related audio offerings Peter Pan/Power Records had available. 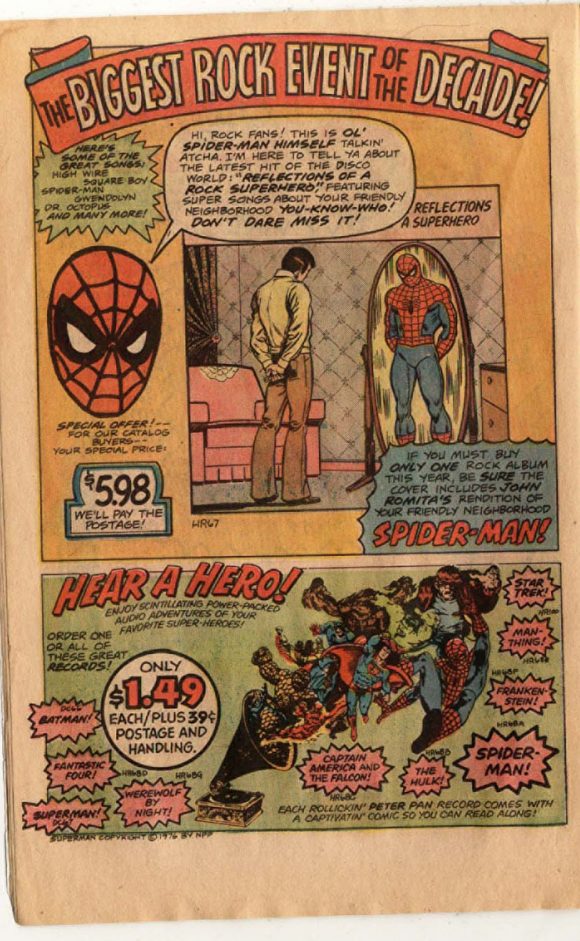 Courtesy of The Superhero Shop

I don’t know how many kids of the ’70s knew what a phonograph was, but the idea of all these characters emerging from it is a great visual, nonetheless. And up above we have Spider-Man himself hawking “The Biggest Rock Event of the Decade!” Yes, Spider-Man: Rock Reflections of a Super Hero was bigger than Bowie, Springsteen, Queen and Zeppelin combined!

Well, not really, but it does have a great John Romita cover!

8. Also from 1976, this page of Bat-goodies is the usual fare of rack toys, mostly produced by AHI, such as the Batmobile/Batboat set (note the Jaws reference!) and the stunt cycles below.

But the real money shot is the Empire ride-on Batcycle (or Bat-Bike) in the middle of the page. I had this baby as a kid, and have one now, and I have a ton of fond memories tied to this and its sister product, the Empire pedal Batmobile. Nothing made me feel more like the Caped Crusader than hopping onto these and speeding away! 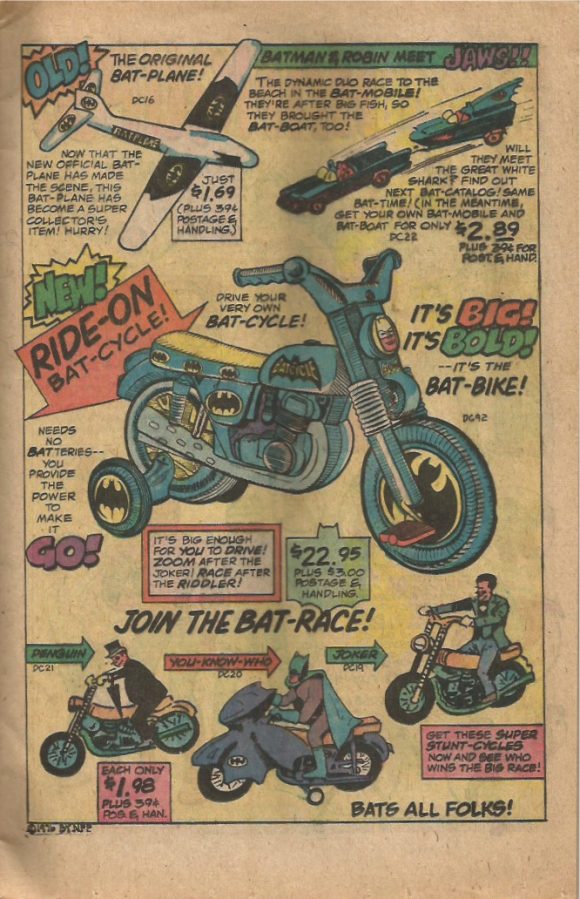 7. More Mego goodness from 1979, this time focusing on the 3 3/4-inch Pocket Super Heroes line of DC and Marvel characters.

Mego revived their earlier, squat posed Comic Action Heroes line by giving them straight legs, and in some case arms, no doubt in response to the game-changing advent of Kenner’s similarly-styled Star Wars line. 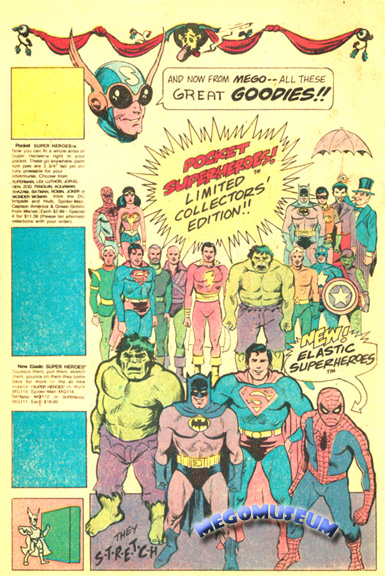 Oddly enough, Shazam! (Captain Marvel), Joker and Penguin were never released in the Pocket Super Heroes style, so if Heroes World fulfilled these orders, they must have sent old Comic Action stock!

At the bottom we see Superman, Batman, Spider-Man and the Hulk standing around, supposedly representing the Elastic Super Heroes. The real figures don’t look nearly as detailed, and Mego got into a bit of trouble with Kenner for aping their winning Stretch Armstrong formula. Not shown is the actually appropriate Plastic Man figure!

6. OK, this spread is advertising the previously featured 12-inch Mego figures again, but that’s not really the point. Look at that gorgeous Joe Kubert artwork! 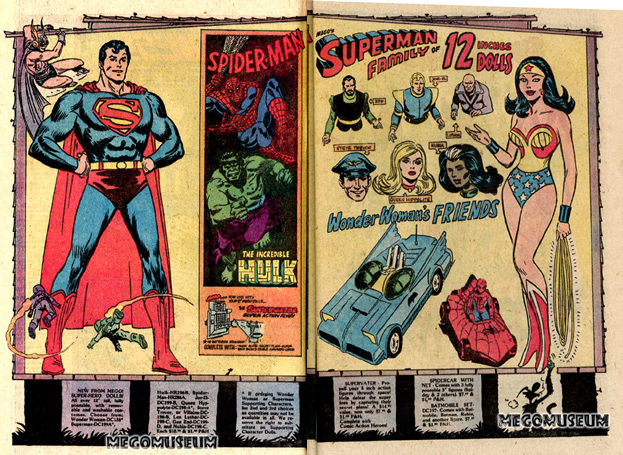 Kubert rarely got to draw Superman and Wonder Woman, and NEVER drew Spider-Man or the Hulk, being mostly a DC guy for the bulk of his career. Just beautiful stuff, even though Hippolyta looks a bit like Supergirl.

5. This 1976 spread is so full of win, people are still cheering for it. Classic art from Romita, Kirby and others abounds, and being 1976, there are some great Bicentennial-themed offerings as well.

But the real star is that fantastic “Excelsior!” shirt featuring Marie Severin’s portrait of Stan “The Man” Lee at his funkiest and flashiest, back in the days when he sported a rug to seem hipper to the young ’uns. Little did he know a generation of movie fans would grow to love Stan as a loveable nonagenarian. Courtesy of The Superhero Shop

4. Another page of Bat-goodies, from the 1977 catalog this time, with another great piece of Kubert art! This page goes a long way to proving Batmania never really died, it just ebbed a bit in the late ’60s after the onslaught of TV series-related merchandise subsided. But it certainly roared back to life in the ’70s! 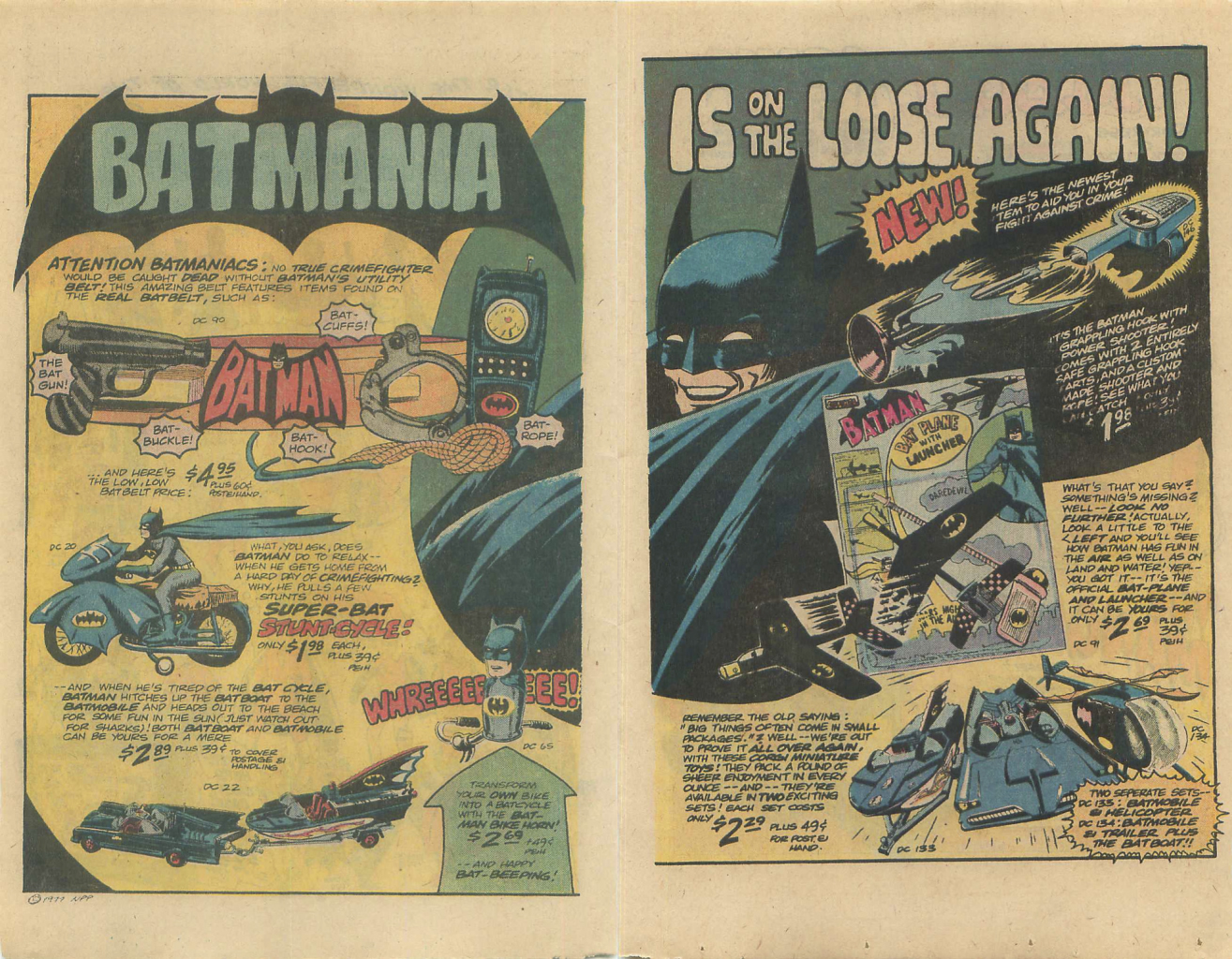 Here we get Bat-staples like the Corgi Junior die-cast vehicles, Remco’s famous Utility Belt, and Fun Stuf’s Batarang launcher, among others!

3. I just love this page from the 1979 catalog showing Mego’s superhero vehicles on parade! I’ll even forgive the artist for mixing up the design of the Pocket or Comic Action Batmobile with the standard 8-inch one. I kind of wish Mego’s Spider-Car had been two-toned like that. 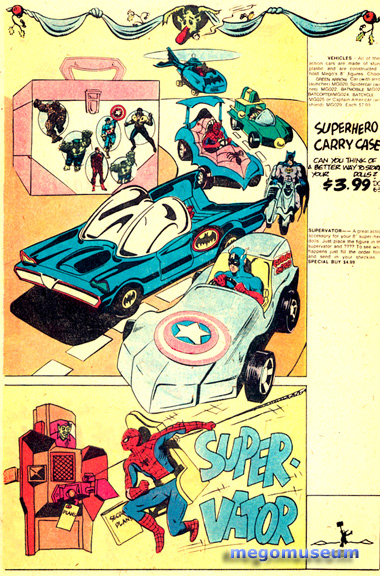 We also get the bewilderingly strange play set/activity toy, the Supervator. This one is a real head-scratcher for even the most diehard of Mego fans. But hey, it’s part of the line, and gave Spider-Man something to do before he got his set of sweet wheels.

Even more surprising is the Marvel edition of the Super Hero Carry Case, which was advertised for both records AND action figures. I own the DC one, but I’ve never seen this Marvel one in the wild.

2. Another case where the products take a back seat to the art. Just look at the composition of this page! The “special effect” of the flashlights makes it look like Cap and Spidey are disintegrating something! And again, it’s Joe Kubert (and probably some of his students) drawing Spider-Man and now Captain America! I’m sure everything on this page is a cheap rack toy, but man, it looks like a million bucks! 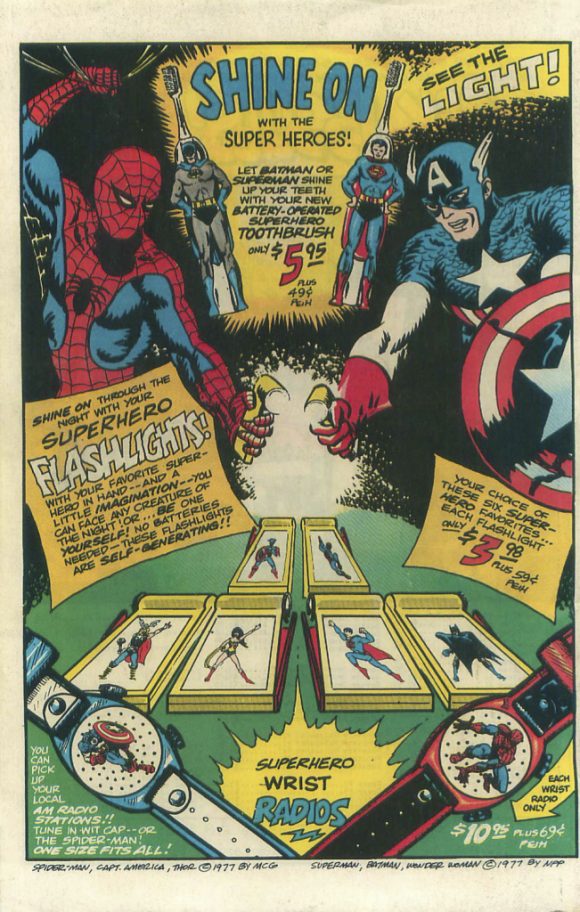 1. How could this page, or some variation of it – of which there are many — NOT be number 1? Mego was the epicenter of the superhero toy explosion in the ’70s, so any page showing the company’s bread and butter line of 8-inch World’s Greatest Super Heroes is going to have to get the top spot. These drawings of the figures (which actually look like the toys for the most part) were reused over and over. But this time we get the addition of the last new figures of the line, the Teen Titans, and Filmation’s Mighty Isis. This image represents every regular figure in the line, minus Tarzan, who was already discontinued by this point, and Wonder Woman, who lost her 8-inch figure for a whole line of 12-inch dolls to tie into her TV series.

If there is a quintessential Heroes World ad page, this is it!

Chris Franklin hosts and produces many shows on The Fire and Water Podcast Network – notably Those Wonderful Toys — found at fireandwaterpodcast.com.