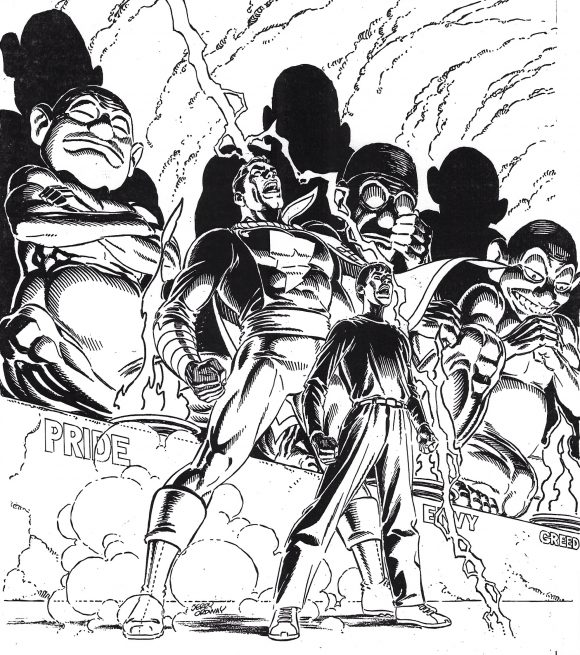 Guest columnist Walt Grogan made his 13th Dimension debut just this month with a superb look at Earth-Two Robin, about whom he runs a terrific Facebook group. That piece — which you can find here — was such a smash that I invited Walt back to write about his favorite character — the original Captain Marvel — and one of comics’ greats, Jerry Ordway, who was born 64 years ago on Nov. 28, 1957. (You should also join Walt’s Facebook group The Marvel Family Web!)

Hey, it’s Jerry Ordway’s birthday! It’s hard to describe Jerry’s impact on the world of comics but I’ll give it a try: I first noticed his work inking Bob Hall on the Creature Commandos in Weird War Tales #100 (June 1981). But he really made his mark soon after, starting with the preview of the All-Star Squadron in Justice League of America #193 (August 1981) and then in its own magazine, first inking Rich Buckler, then Adrian Gonzales, and finally himself after taking over the pencilling duties. His polish improved every penciller he worked with.

While Jerry was drawing All-Star Squadron, I was hoping without hope that he would get a chance to tackle the Big Red Cheese, himself, Captain Marvel! By the time the World’s Mightiest Mortal made his appearance in All-Star, Jerry had left for Infinity, Inc. Luckily, and thankfully, he was able to provide the inks over Rich Buckler’s pencils on All-Star Squadron #36 (August 1984). That issue featured Cap taking on the Golden Age Superman — and Jerry brought out the marvelousness of Cap’s face and power. I knew then that Jerry was the perfect artist to take on Cap and I hoped that DC would see it, too. 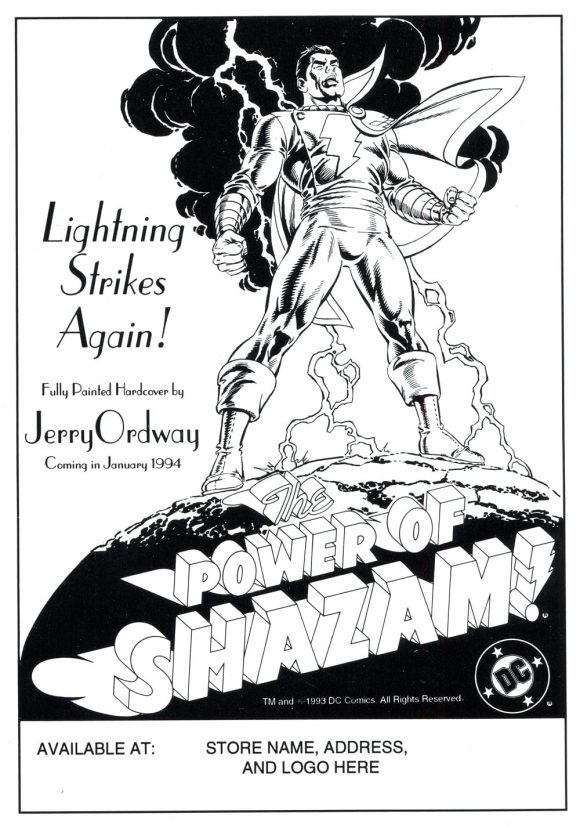 There had been some false starts with other creators, but Jerry finally got tapped to reimagine the Big Red Cheese as both writer and artist. And he didn’t take the easy way out. Instead he did it the Ord-way — not only pencilling and inking The Power of Shazam! graphic novel but fully painting over his inks! He crafted his own corner of the DC Universe, reimagining Fawcett City as a bustling metropolis steeped in an art deco nostalgic style that harkened back to Cap’s heyday in the 1940s. When I found out, I couldn’t have been happier, and when the graphic novel was released in 1994, I was overjoyed. Jerry had hit on the right amount of seriousness and whimsy.

As a huge fan of the original Captain Marvel, it always made sense to me that when Billy Batson transformed into the World’s Mightiest Mortal, they were one and the same. Why give a kid powers, if he was just going to go into limbo? While some have overplayed the naivete and immaturity of Captain Marvel, Jerry managed to handle it with aplomb.

With the success of the graphic novel, it was only natural that DC would greenlight a monthly series and so in February 1995, The Power of Shazam! was launched with pencils by Pete Krause, inks by Mike Manley, and written by Jerry who also did beautiful, fully painted covers for all 48 issues of the series. 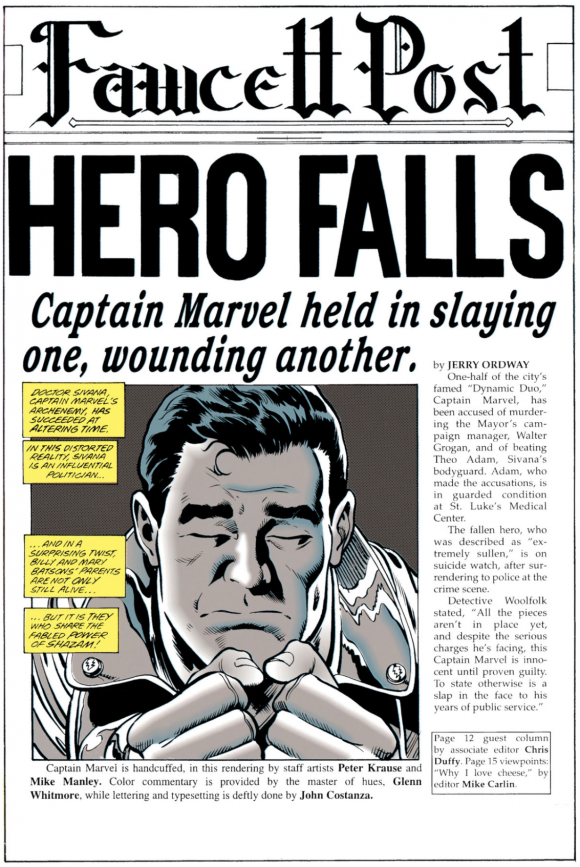 So, happy birthday, my friend! Here are 13 of my favorite covers of The Power of Shazam! monthly series — without trade dress. (I even decided against including the cover to Issue #26 (May 1997) in which a beer-loving mayoral campaign manager to Dr. Sivana, named “Walter Grogan,” joins the DC Universe!)

13. The Power of Shazam! #2 (April 1995). Nostalgia boils off this cover featuring Captain Marvel, Beautia Sivana, and the reintroduction of the Arson Fiend! Except for the fiery color of the cover, this scene could have been ripped right out of a serial with the World’s Mightiest Mortal saving a damsel in distress! Jerry cleverly and tastefully shows the brightness of the flames shining through Beautia’s beautifully painted gown. 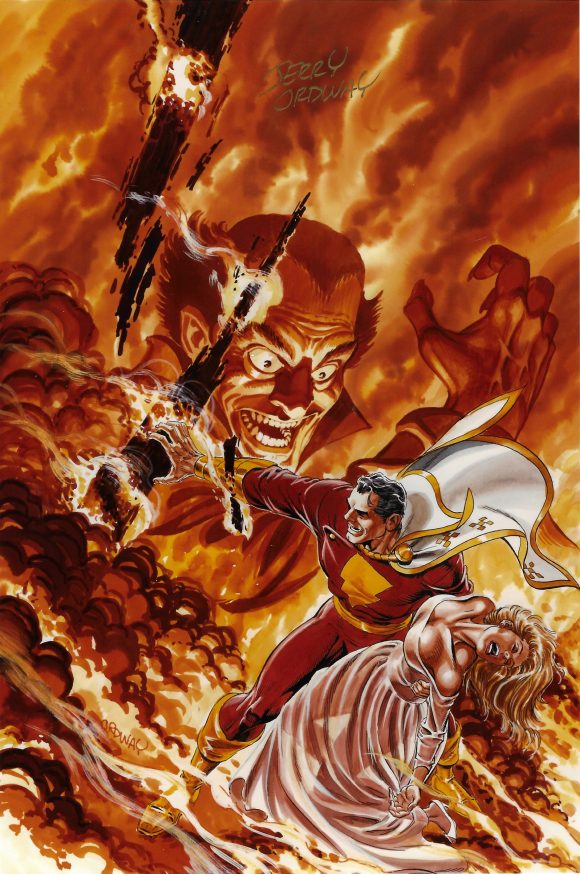 12. The Power of Shazam! #29 (Aug. 1997). It was bound to happen! You can’t keep a good rabbit down even in the main DC Universe! Hoppy the Marvel Bunny returns in the way you would expect — via a good ol’ magician’s top hat! And unlike the Hoppy of old, this rabbit has an attitude! 11. The Power of Shazam! #23 (Feb. 1997). If there’s one thing that Jerry Ordway can paint, it’s water! Sometimes Mr. Atom can look less than threatening, which seems hard for a 20-foot robot — but not here! Jerry does a great job of making Mr. Atom not look clunky but full of menace! And you can feel how Mary and Cap were struggling with him underwater! 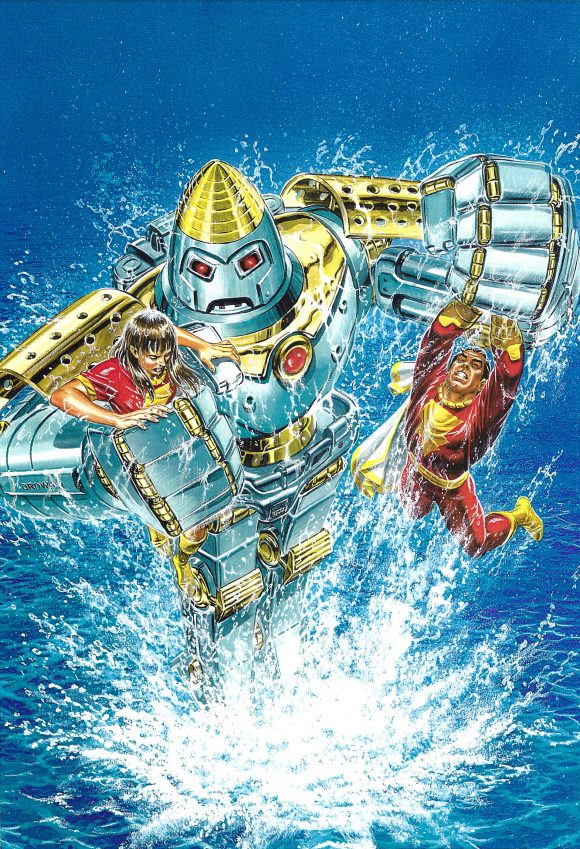 10. The Power of Shazam! #8 (Oct. 1995). This cover has everything! The return of Captain Marvel Jr. bursting through the cover! Captain Nazi battling Spy Smasher! Minute-Man punching a Nazi, and Bulletman… flying! It’s a Fawcett Free-for-All! 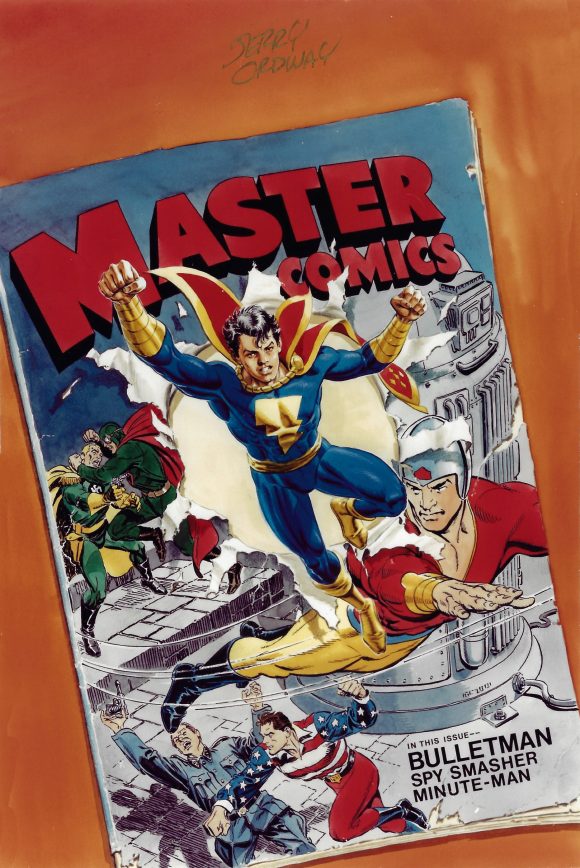 9. The Power of Shazam! #47 (Feb. 1999). Twenty-Five years in the making, this cover is an homage to the cover of Superman #276 (June 1974) by Nick Cardy and featuring an epic battle between Superman and… Captain Thunder?!? Here, Jerry reimagines the battle with Captain Marvel as it might have been! 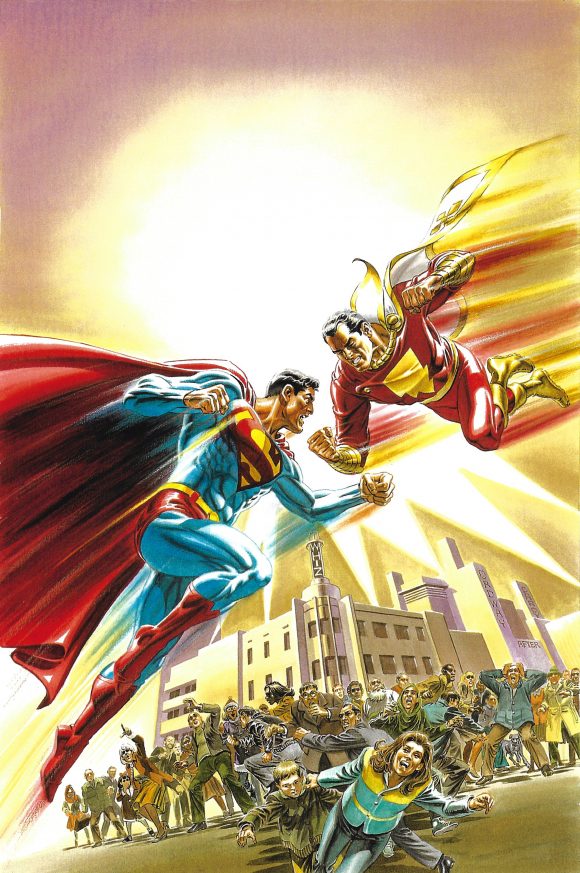 8. The Power of Shazam! #17 (August 1996). It finally hit me why I love this cover so much. It reminds me of Star Trek’s Mr. Spock and Captain Kirk returning through the Guardian of Forever’s portal in “City on the Edge of Forever.” Plus, I love Dr. Sivana’s space suit. While, on one level, it reminds me of the original Iron Man outfit, I’m sure Jerry drew inspiration from some obscure science-fiction movie or pulp cover. 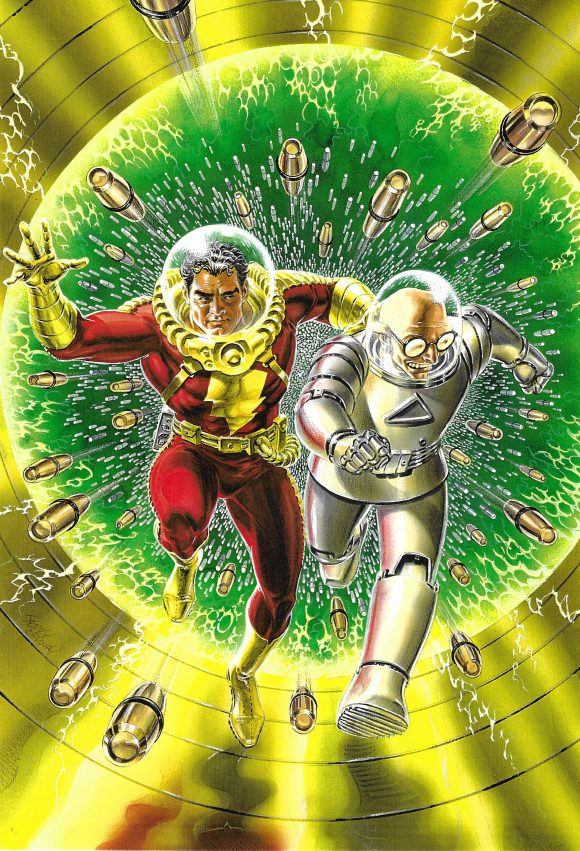 7. The Power of Shazam! #20 (Nov. 1996). There is so much to look at on this cover. Jerry does an amazing job painting a white-out blizzard! It’s not easy to do! And look at how he differentiates Superman and Captain Marvel! Cap doesn’t have the same set of powers as Superman, so unlike Superman who has many different vision powers, Cap has to use his hand to cut through the snow like many of us would have to do. And look at that background! Much like your standard blizzard, Jerry washes out, and reduces to a single hue, the buildings behind Superman and Captain Marvel. 6. The Power of Shazam! #9 (Nov. 1995). When I was a kid this type of cover was my favorite. I don’t know if there’s a name for it, so I’ll just call it a “Team Face-Off”! My only complaint is that I wish Mary Marvel was facing off against a Fawcett villain — no offense to Lady Libertine! 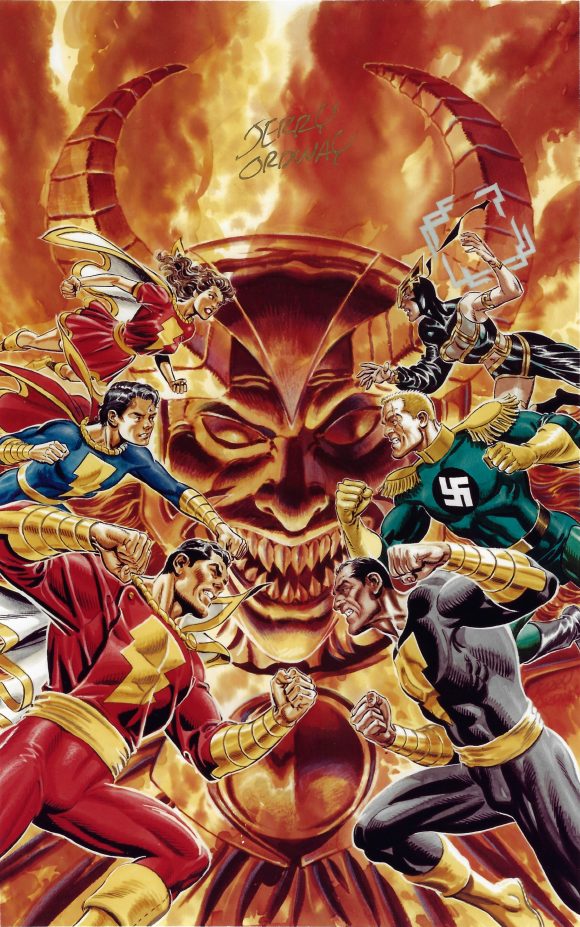 5. The Power of Shazam! #24 (March 1997). Who could have thought that Spy Smasher would ever headline the cover of a comic again?!? Plus, even though that’s C.C. Batson (Billy Batson’s father) standing next to him, if you squint a little bit, maybe it’s Radar, the International Policeman! Okay, I’m stretching things a bit but heck, this cover screams old-school Fawcett like none other! 4. The Power of Shazam! #1,000,000 (Nov. 1998). I love this cover especially for what it represents. Here’s an aged Captain Marvel of the future with long hair and a beard much like the wizard, Shazam. And just like the wizard Shazam, Captain Marvel passes on his powers to a new champion, a young boy named Tanist, who lost his mother. It’s easy to forget that the wizard Shazam was once a hero in his own right, passing his powers onto Teth-Adam, and then to Billy Batson. 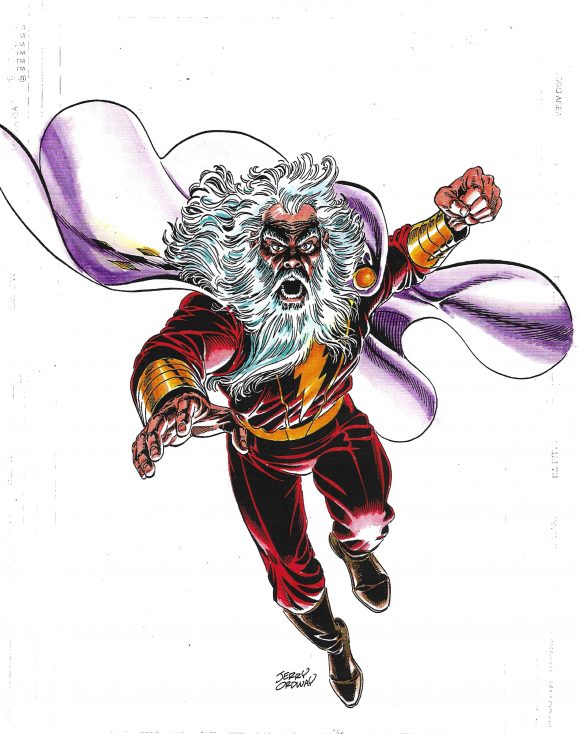 3. The Power of Shazam! #42 (Sept. 1998). When Jerry took over the art on Issue #42, this marvelous cover heralded the change along with a new logo. Jerry also went back to the flattened braid look on the cape. 2. The Power of Shazam! #7 (Sept. 1995). Jerry flipped around the introductions of Mary Marvel and Captain Marvel Jr., so Junior is missing from this cover but I adore that Da Ordster gave us a smiling Cap (and Mary) on at least one cover in the run! 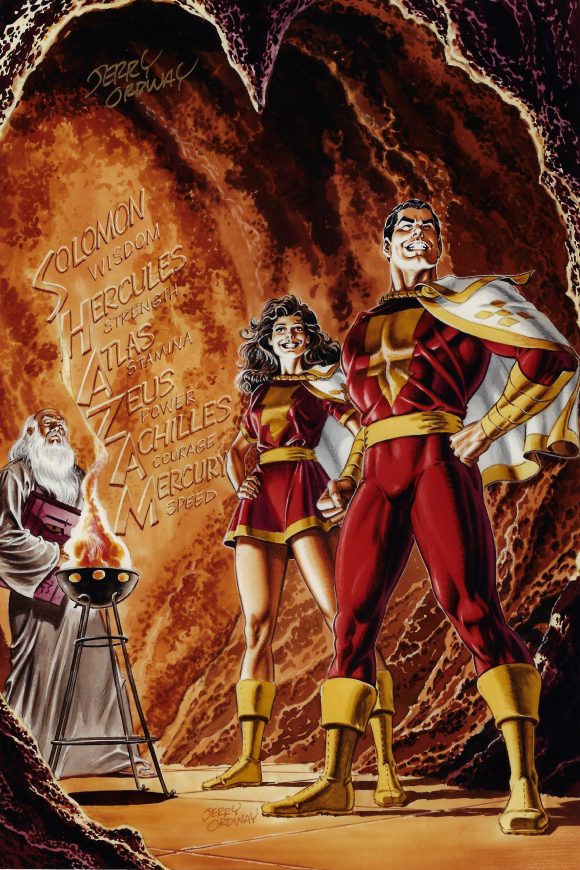 1. The Power of Shazam! #1 (March 1995). You can almost smell the ozone in the air from that power-filled lightning strike! Look at the newspapers flying around and the garbage can bounced into the air and bursting open like a giant popcorn kernel! Jerry subtly gives us Billy Batson’s background as a newspaper boy, ties in the abandoned subway tunnel — the portal to the Rock of Eternity– and paints a nearly-3-D Big Red Cheese flying off the cover! And, although you can’t see it here, kudos to editor Mike Carlin for putting that mini-“Captain Marvel” logo on the cover! It was something that hadn’t been seen since the 1970s! 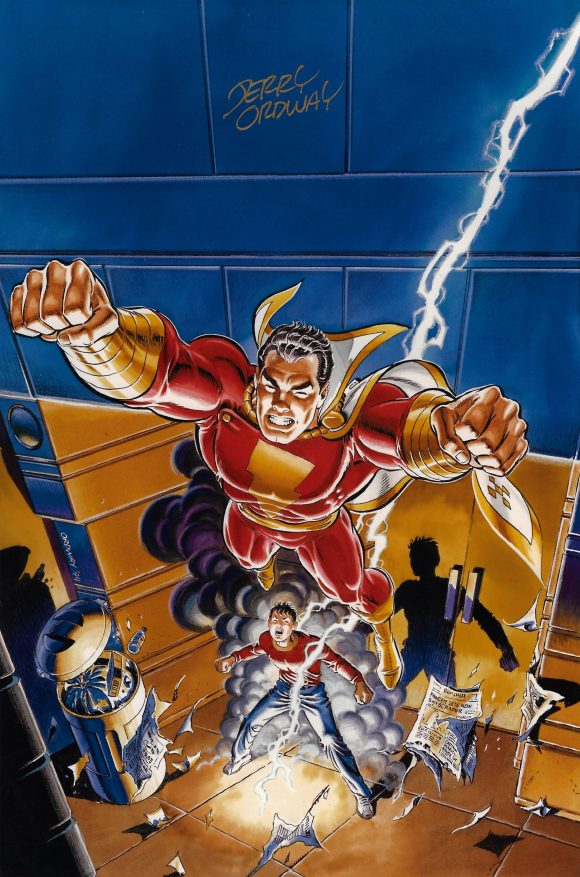