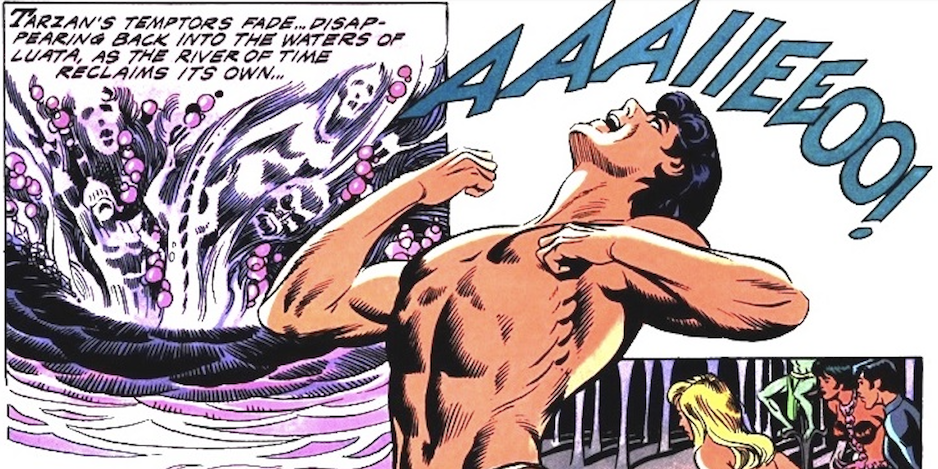 For Curt Swan, it was Superman. For Neal Adams, it was Batman. Every great comic book artist can be successful in drawing many characters but there is usually one that rises above the rest to be called the pinnacle of their career. For Russ Manning, it was Tarzan.

While Manning’s work on Magnus, Robot Fighter 4000 AD was jaw-dropping, it was nothing compared to the heights he reached drawing Tarzan in comic books, in newspapers, and in graphic novels sold around the world. Through the influence of Tarzan’s main artist at the time, Jesse Marsh, Manning (born January 5, 1929) was hired in 1952 at Western Printing & Lithographing Co., which produced the Tarzan comic book and many others for Dell. 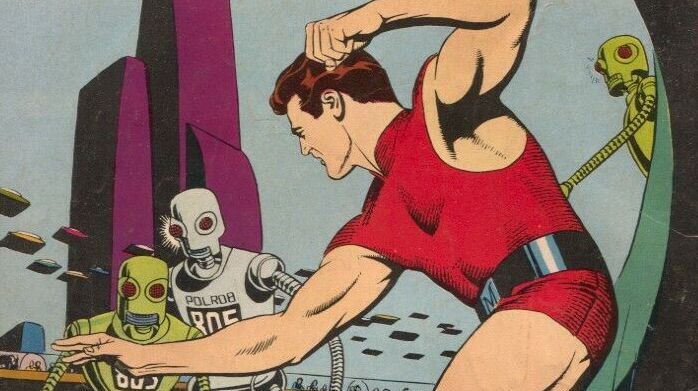 Manning’s initial assignment, though, was drawing the Tarzan comic’s backup strip, “Brothers of the Spear,” starting with Edgar Rice Burroughs’ Tarzan #39 (Dec. 1952, Dell). He was still drawing it over 100 issues later. Manning did get to do a Tarzan story on occasion (the first being in 1954 for a Western giveaway, Boys’ and Girls’ March of Comics #114) but those opportunities were few and far between. So, while Manning kept working on “Brothers of the Spear” over the years, he was also developing his clean and beautiful drawing style in other Dell titles, including illustrating exceptional comic book adaptations of TV shows and movies.

By 1963, Edgar Rice Burroughs’ Tarzan of the Apes (as the comic title was changed to) was being published by Gold Key (an imprint of Western), and Manning was still doing “Brothers of the Spear,” but he was also now drawing Magnus, Robot Fighter 4000 AD (which he co-created with editor Chase Craig) and that comic’s backup feature, “The Aliens.”  Within a year, he became the artist for another Gold Key new title, Korak, Son of Tarzan.

In 1965, Jesse Marsh retired and he recommended that Manning be given the main Tarzan feature. It would still be written by Gaylord DuBois (who had been doing the Tarzan comic since 1948) but it would be a new beginning for Tarzan because the comic book started adapting Edgar Rice Burroughs’ novels and stayed away from the baggage of the movies’ version of Tarzan (e.g., Cheetah and Boy). Manning had been a huge Burroughs fan since childhood, so this return to the character’s roots was a dream assignment for him. 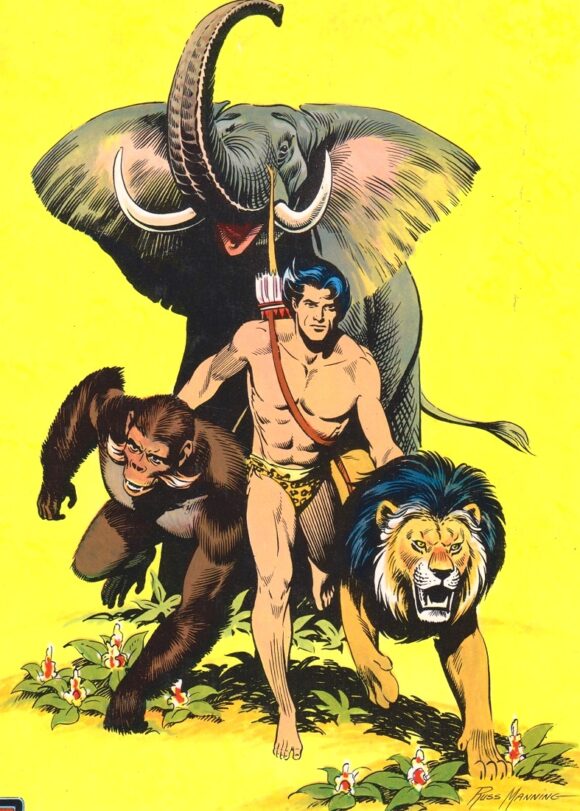 Back cover for European editions

During that time, he also illustrated several new Tarzan graphic novels for the European market where Manning had an enormous following. And, as extraordinary as the newspaper strip art was, these books were Russ Manning at his very finest.

In 1979, there was a two-month period when Manning was writing and drawing the Tarzan newspaper strip and the new Star Wars strip, which started March 11, 1979; however, the pressures of doing both led him to giving up Tarzan. Regrettably, his work on Star Wars lasted just over a year because his health deteriorated and he quit the strip. Russ Manning died of colon cancer on December 1, 1981, when he was only 52 years old. 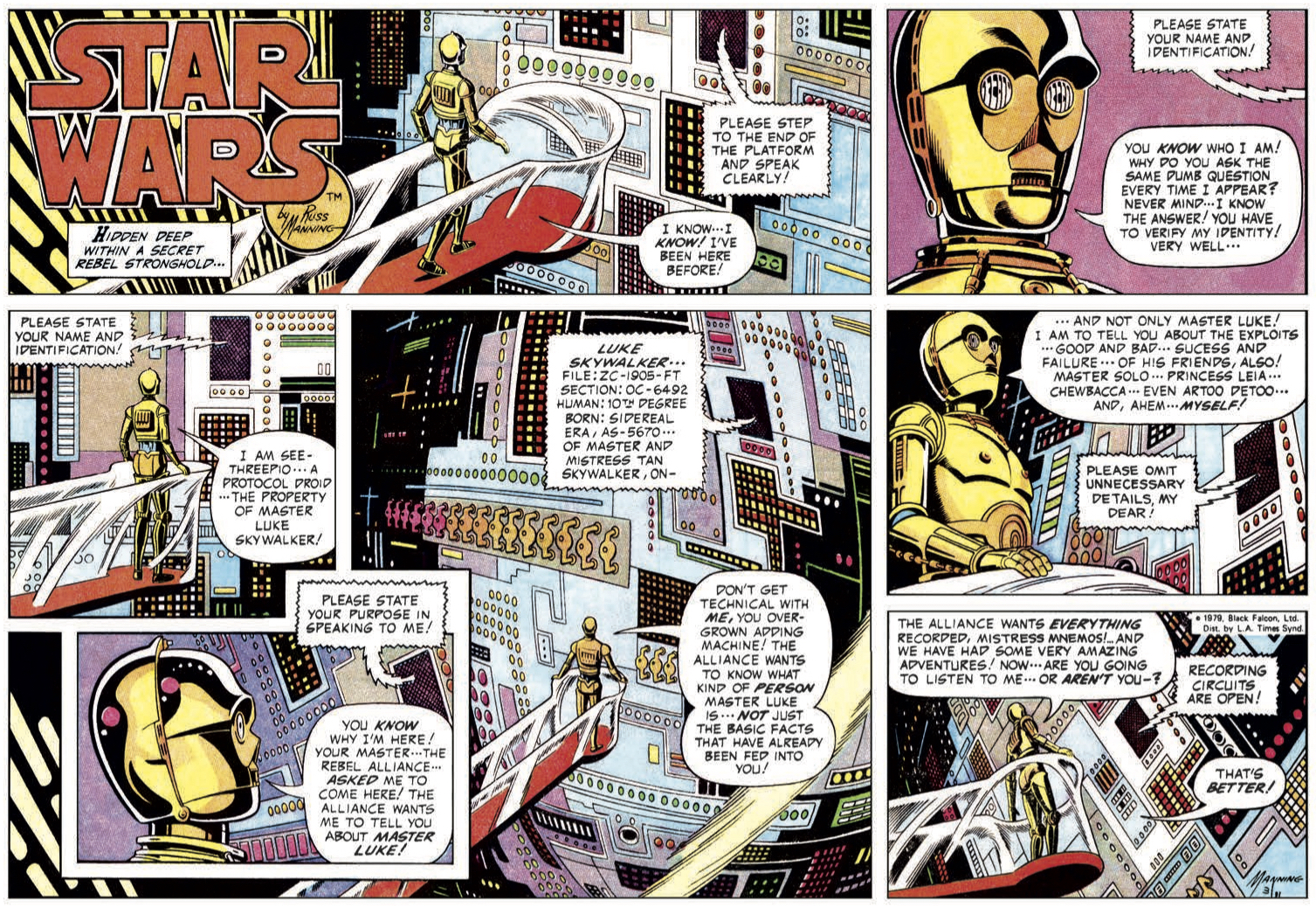 In 1982, the San Diego Comic-Con created the annual Russ Manning Promising Newcomer Award in his memory. The first honoree was Dave Stevens, who had been an assistant to Manning.  (Other Manning assistants included Rick Hoberg, Mike Royer and William Stout.)

Russ Manning left a magnificent body of work. Here is a selection of 13(+) of his glorious Tarzan illustrations.

The three pages below are from Edgar Rice Burroughs’ Tarzan of the Apes #155 (Dec. 1965, Gold Key), which was his first adapting the original Burroughs novel: 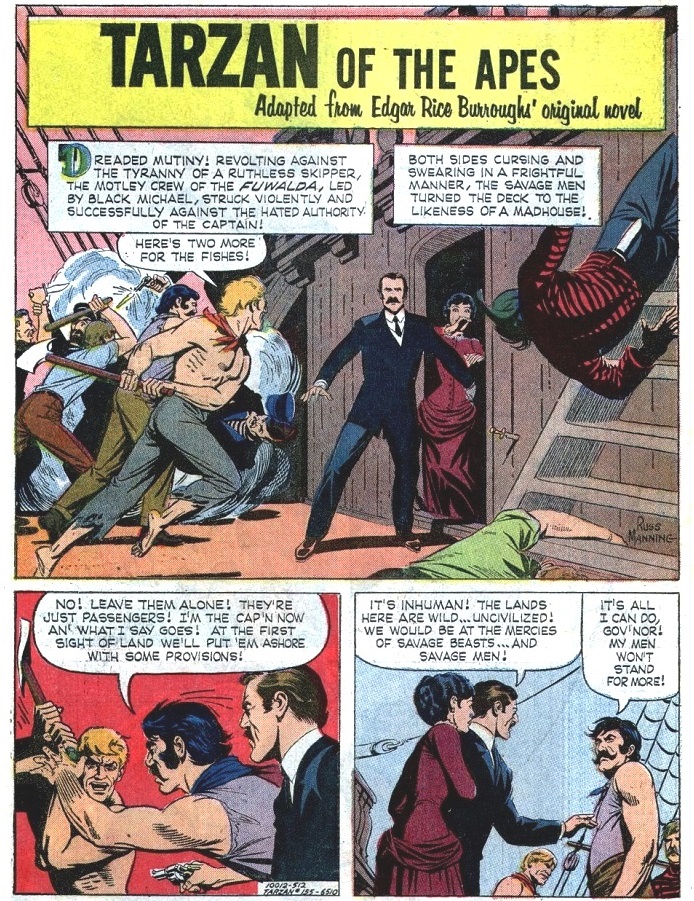 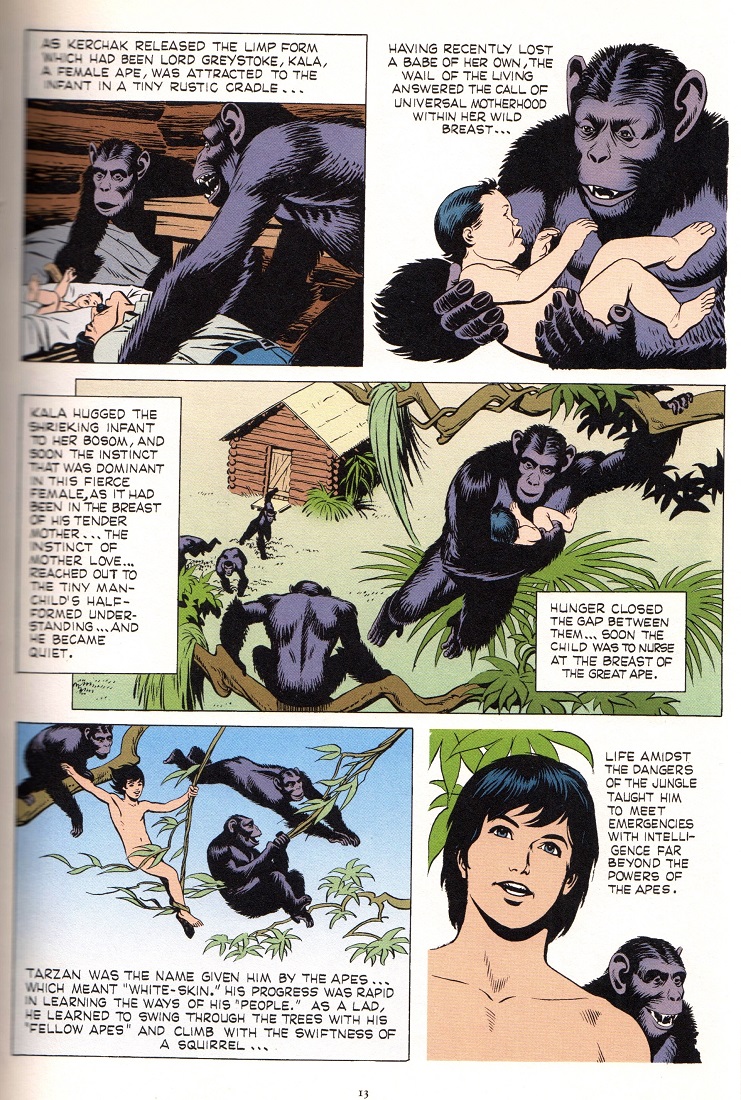 The next images include a pair of dynamic dailies and four Sundays, including his first on January 4, 1968: 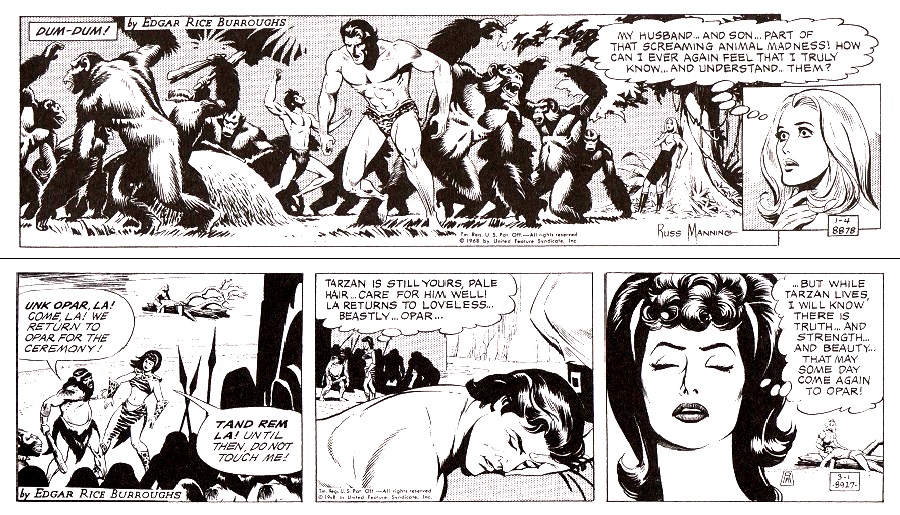 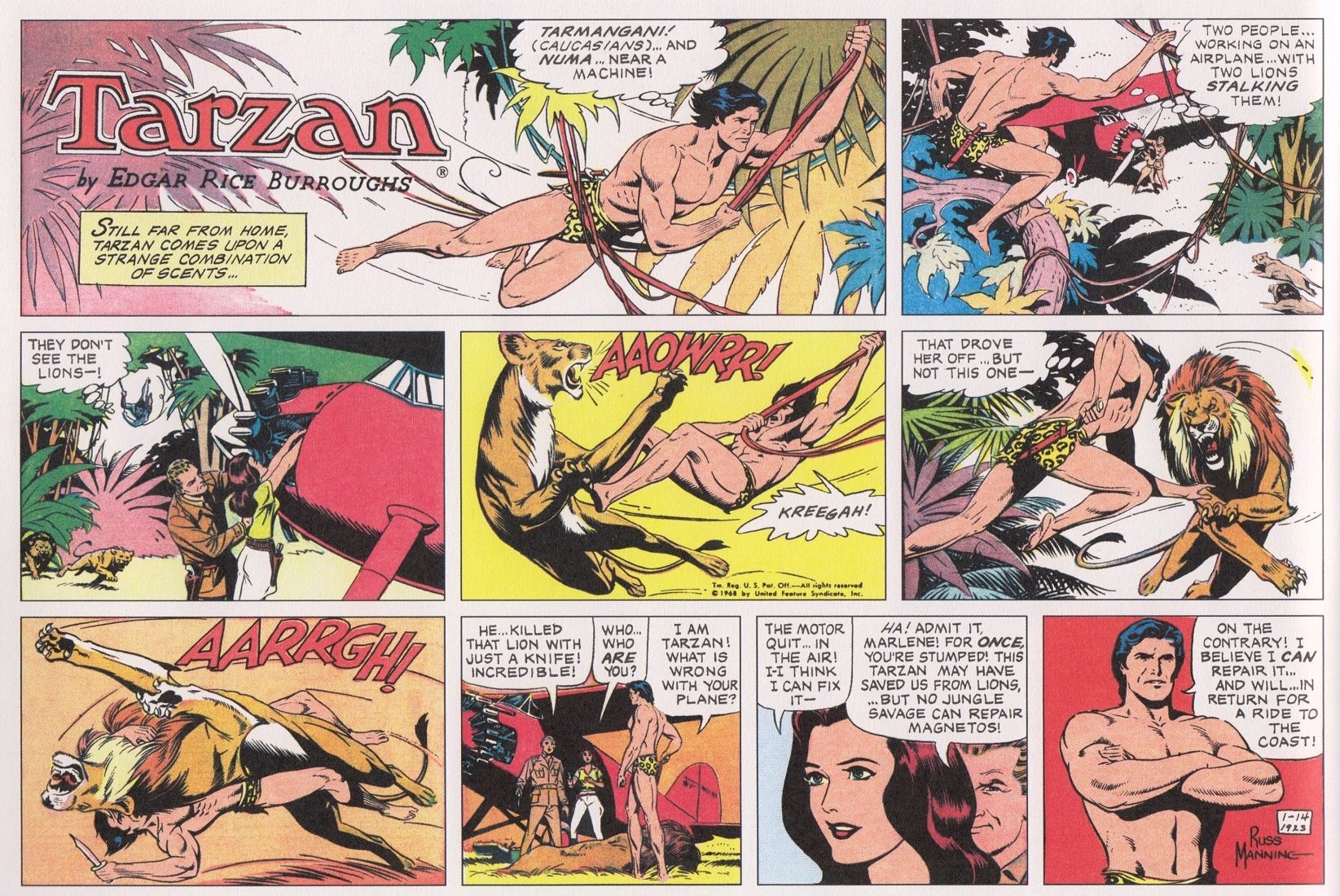 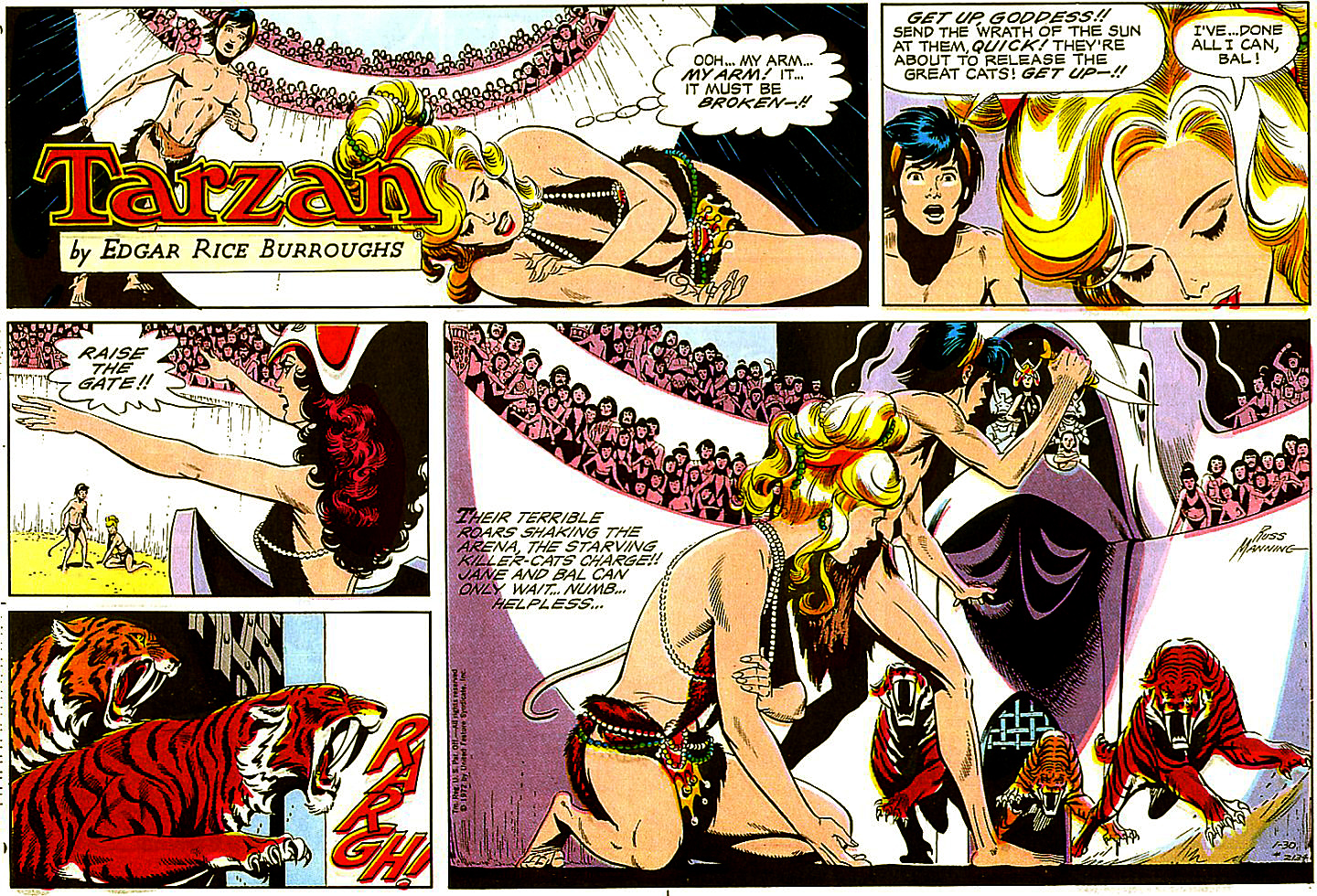 Here are covers and select interior pages from two of the Tarzan graphic novels he illustrated for the European market, Tarzan in the Land That Time Forgot and The Pool of Time: 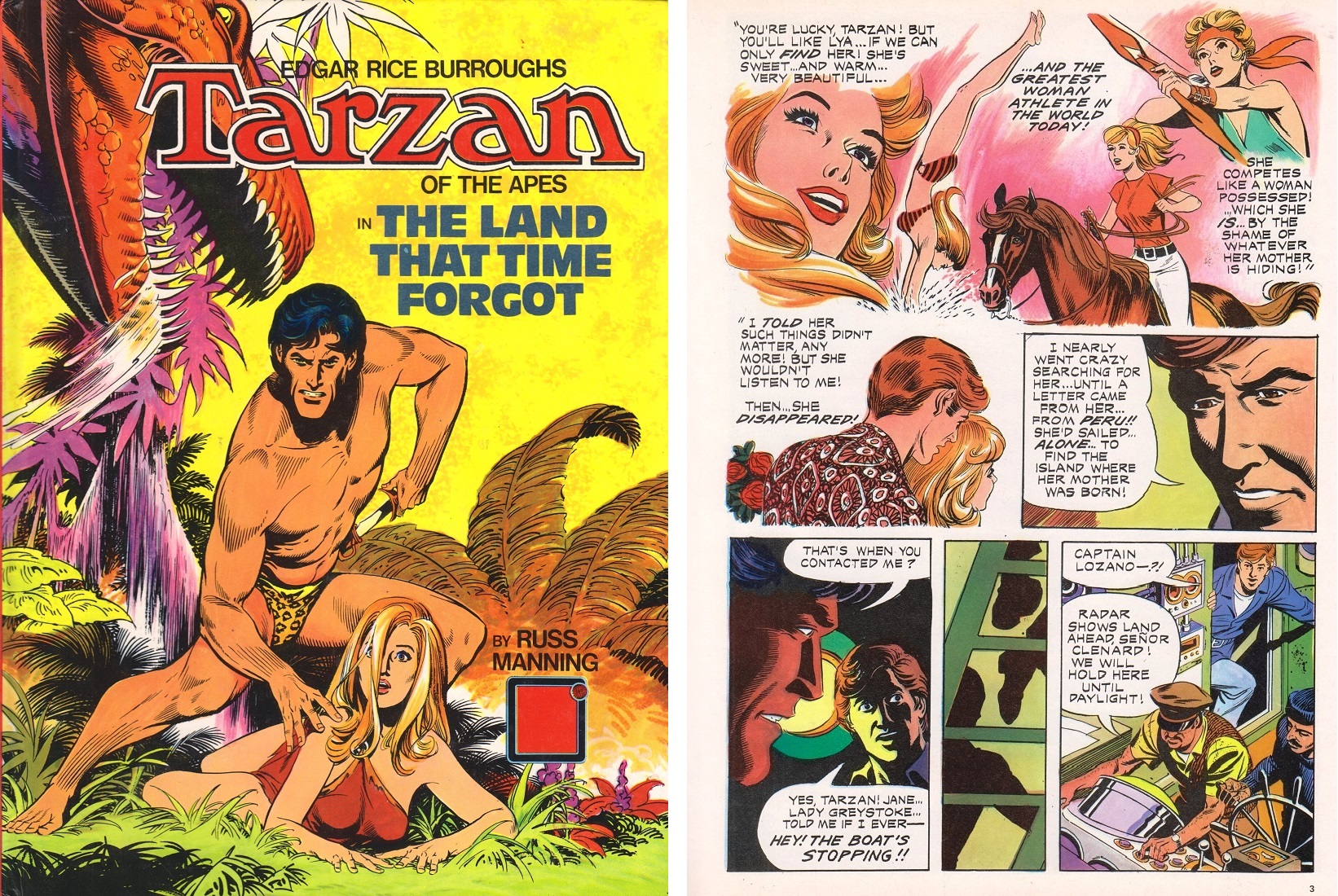 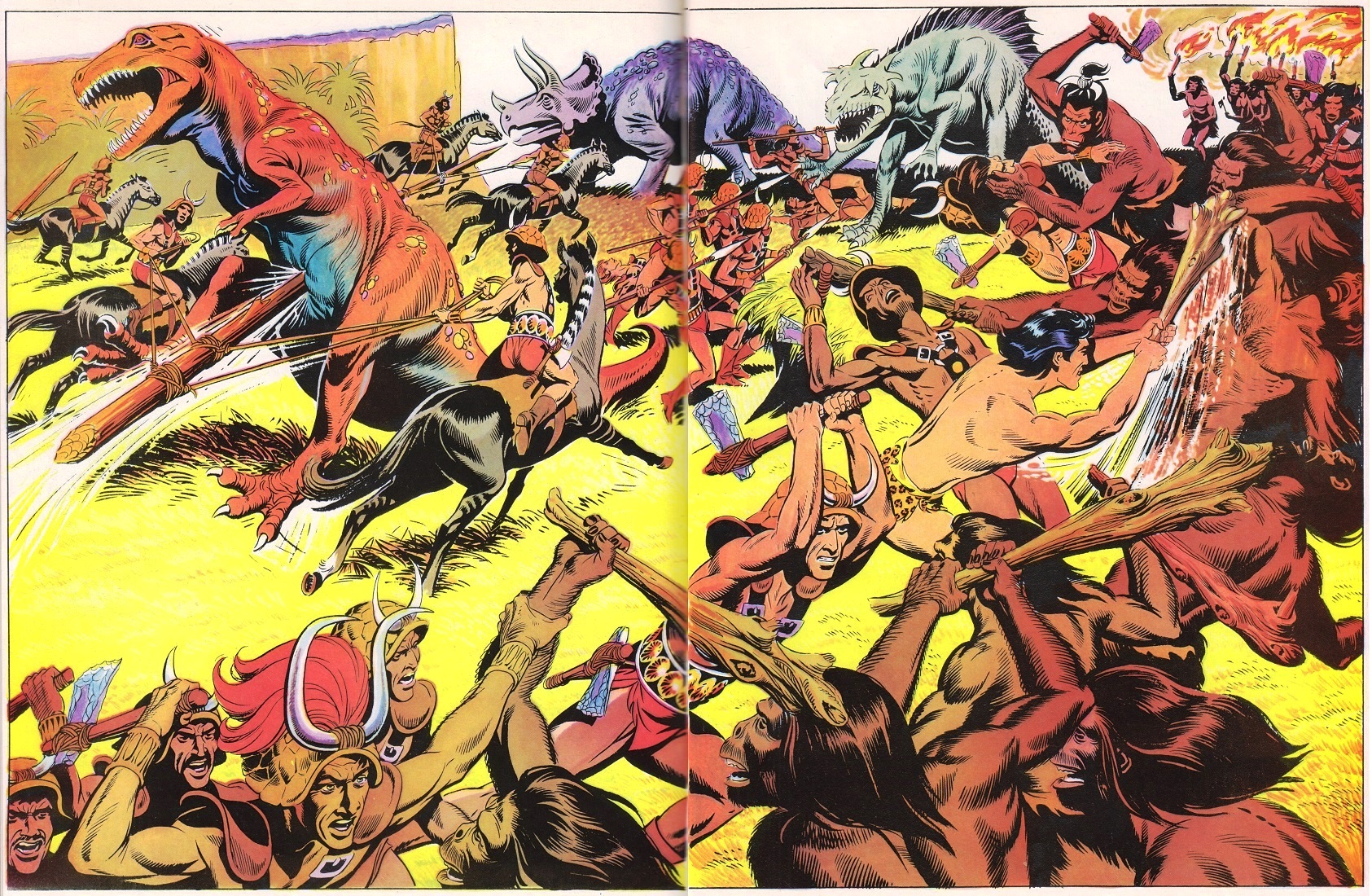