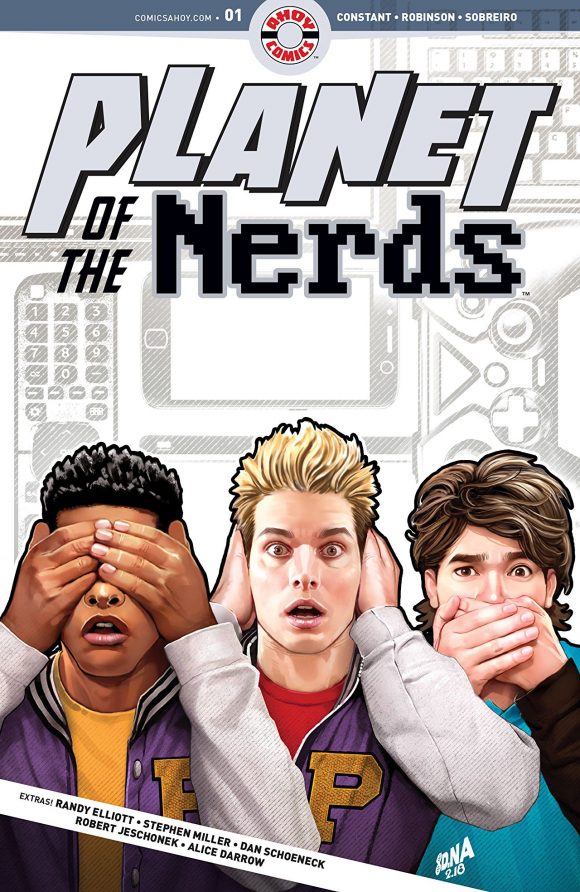 Hey, we all have at least a little nerd in us. Otherwise, why would you be here?

So dig this groovy list of comics’ greatest dorks by writer Paul Constant, whose Planet of the Nerds #2 — art by Alan Robinson, colors by Felipe Sobreiro — is out May 15 from the awesome AHOY Comics.

Chances are good that if you’re reading this essay, someone has called you a nerd at some point in your life and meant it as an insult. Kids can be cruel, and the cruelest bullies of all turn the things you most love into a weakness — an object of shame. Until fairly recently, loving comics too much could get you mocked and even beaten up at any high school in America.

So it’s probably not a coincidence that comics have traditionally featured nerds of all kinds as heroes, as villains, and as supporting characters. We like to see ourselves reflected in our entertainment — sometimes accurately, sometimes as a funhouse-mirror version of ourselves. You could probably populate a good-sized Midwestern city with all the nerds who have appeared in comics through history.

My first full-length comic, Planet of the Nerds, is an update and investigation of the century-long love affair between nerds and comics. It’s about three jocks from the 1980s who are cryogenically frozen and accidentally revived in the modern age, when nerds rule the Earth. 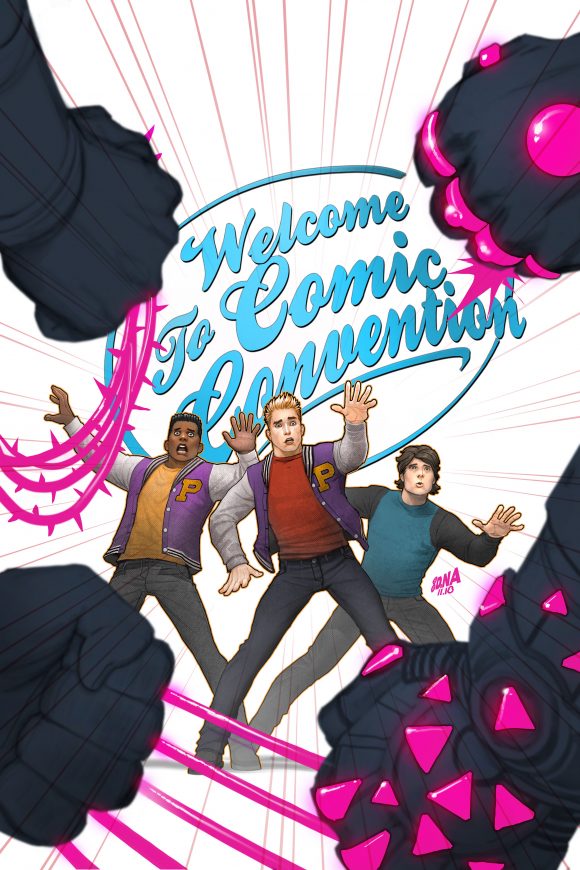 In their own time, the jocks were Big Men on Campus. But in 2019, when everyone is a superhero fan, programming is a high-paying gig, and the wealthiest people on the planet are computer geeks, the jocks find themselves at the bottom of the pecking order. Naturally, they declare war.

As I prepared to write Planet of the Nerds, I had to do a lot of thinking about how nerds have been represented in popular culture through the years. The 13 nerds I’m sharing on this list might not all be the most popular or relatable nerds in comics history, but taken in aggregate they represent the wide varieties of the American nerd experience — both the good and the bad.

13. Forge. Man, Forge is the best. Yes, he’s a prickly one-legged Native American with a terrible mustache and the power to invent pretty much anything (which backfires on him literally all the time). But he’s also confident enough in his own body to wear teeny-tiny shorts in public — and that confidence pays off in the form of a passionate romance with Storm, in her swoon-worthiest mohawk phase, no less! Man, Forge is the best. 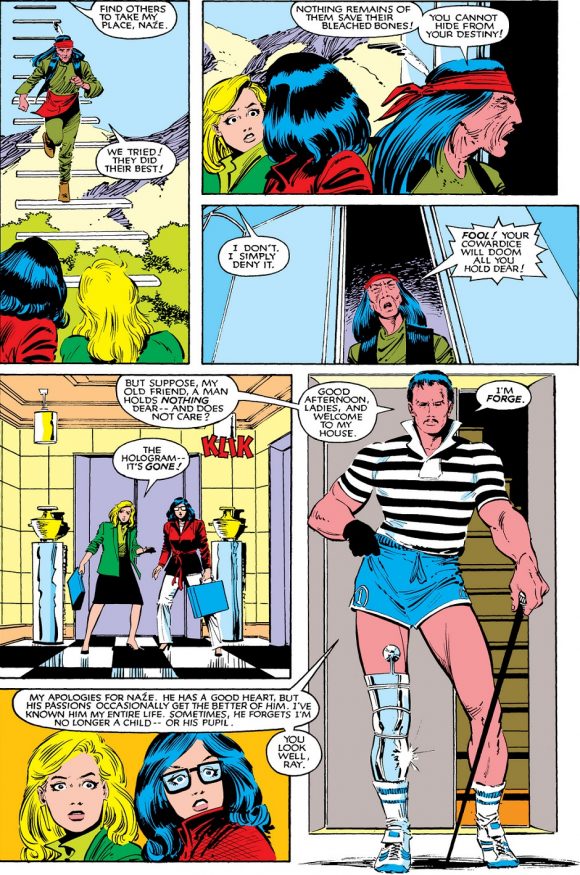 12. Doctor Bong. Embarrassing personal admission time: Doctor Bong’s origin story is the first comic that ever made me cry. When I read those Howard the Duck comics as a kid, Doctor Bong’s tragic past — a meek and ineffectual pudgy nerd with a speech impediment who was mercilessly mocked — hit a little too close to home. Doctor Bong is always played for laughs, but he’s always struck me as a deeply tragic figure.

11. Linus Van Pelt. Technically, Linus is a comic-strip character and not a comic-book one, but since alternative comics publisher Fantagraphics has collected every Peanuts strip in a beautiful graphic novel format, I’m giving myself a pass. And how could I not include Linus, the literary, sometimes-glasses-wearing, Great-Pumpkin-believing intellectual outcast of the Peanuts crew? The fact that Linus carried a torch for his school teacher, Miss Othmar, only made him more relatable. 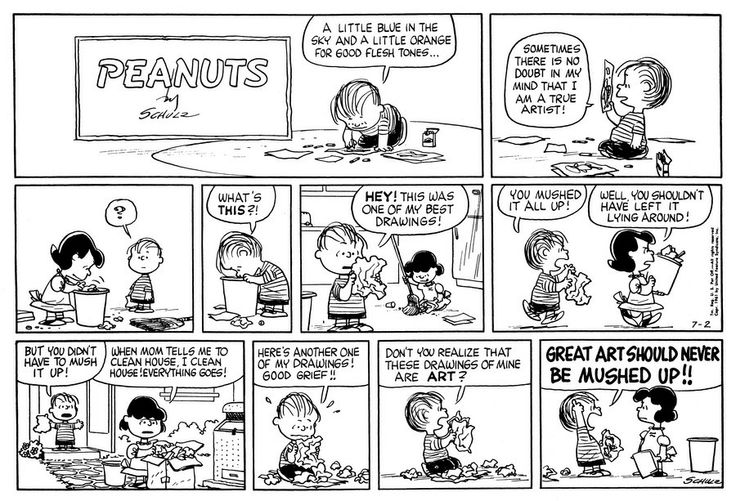 10. Jessica Jones. I would argue that in Brian Michael Bendis’ long and prolific career, one of his very best ideas was to retroactively make Jessica Jones a high school classmate of Peter Parker who was madly in love with him. The twist — that Peter literally didn’t even know who Jessica was because he was always daydreaming about hotter, more popular girls — was a beautiful knife to the heart. How many of us comic-book geeks wasted our high school years dreaming of kissing the prom queen while amazing young women like Jessica sat quietly by, hoping we’d notice them? 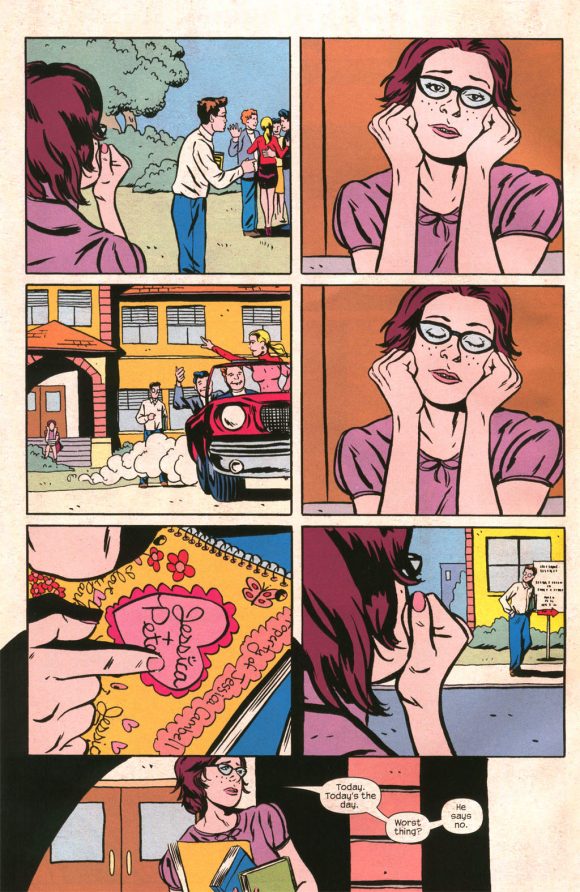 9. Donatello. Boring doofuses wanted to be Leonardo. Skaters wanted to be Michaelangelo. Edgelords wanted to be Raphael. But us nerds knew that Donatello, the inventive, dorky Teenage Mutant Ninja Turtle, was the best one of all. 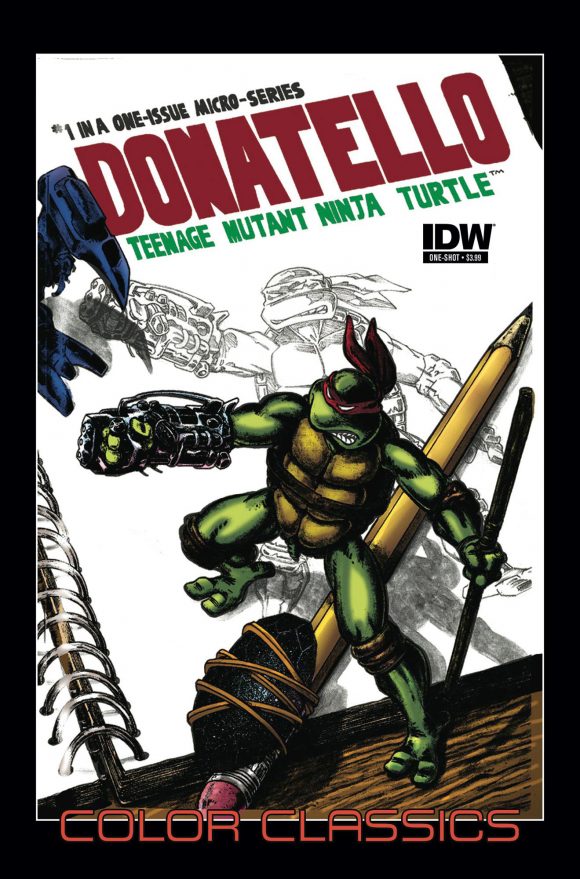 8. Georgia Sivana. The pug-ugly Dr. Sivana is pretty much your run-of-the-mill mad scientist, but I’ve always had a soft spot for his daughter, Georgia. See, Dr. Sivana is the father to two sets of twins: Georgia and her brother Thaddeus Jr., who look like carbon-copies of their dad; and the impossibly gorgeous Beautia Sivana and her hunky twin brother, Magnificus. Georgia has always been madly envious of Beautia’s physical beauty, at one point engaging in a whole elaborate time-travel caper just to try to go back in time and pay for braces for her teenage self. She’s maybe the single most tragic figure in the whole Marvel Family mythos. 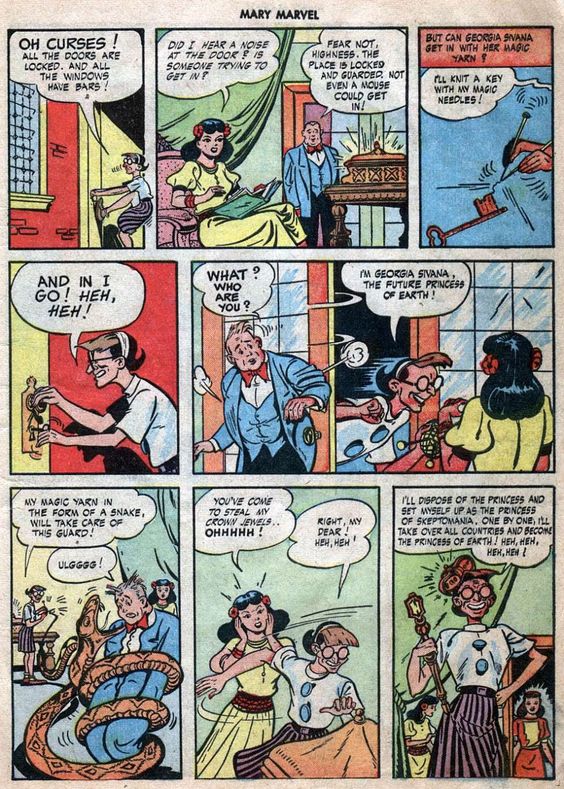 7. Kamala Khan. When Ms. Marvel first debuted, I thought that writer G. Willow Wilson’s decision to make Kamala a Marvel fangirl was a little too precious and self-referential. Over Wilson’s remarkable run on the character, she proved me wrong time and time again. Khan’s obsession with the heroes of the Marvel Universe — not to mention her love of MMORPGs — turned out to be the character’s greatest strength as she gradually parlayed her geeky interests into a valuable base of superheroic knowledge.

6. Chunk. This villain from early in Wally West’s time in the Flash costume is a highly underrated comics nerd. Chunk is an emotionally wounded, awkward genius who responds to the world’s cruelty by teleporting people to a weirdly empty pocket dimension. Soon, though, Chunk is rehabilitated and he becomes a stellar supporting cast character, providing all kinds of fancy tech support for the Flash and his pals in the Justice League. 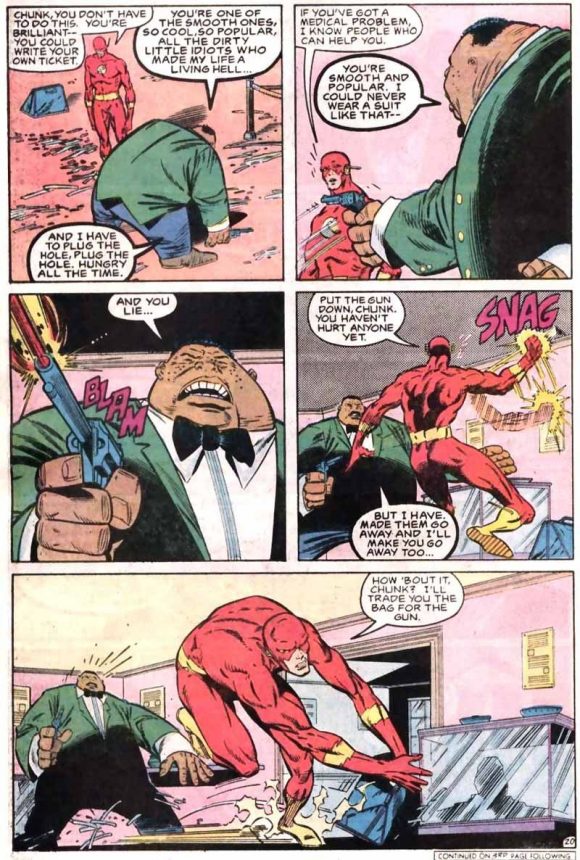 5. Peter Parker. Are you kiddin’? That bookworm wouldn’t know a cha-cha from a waltz! 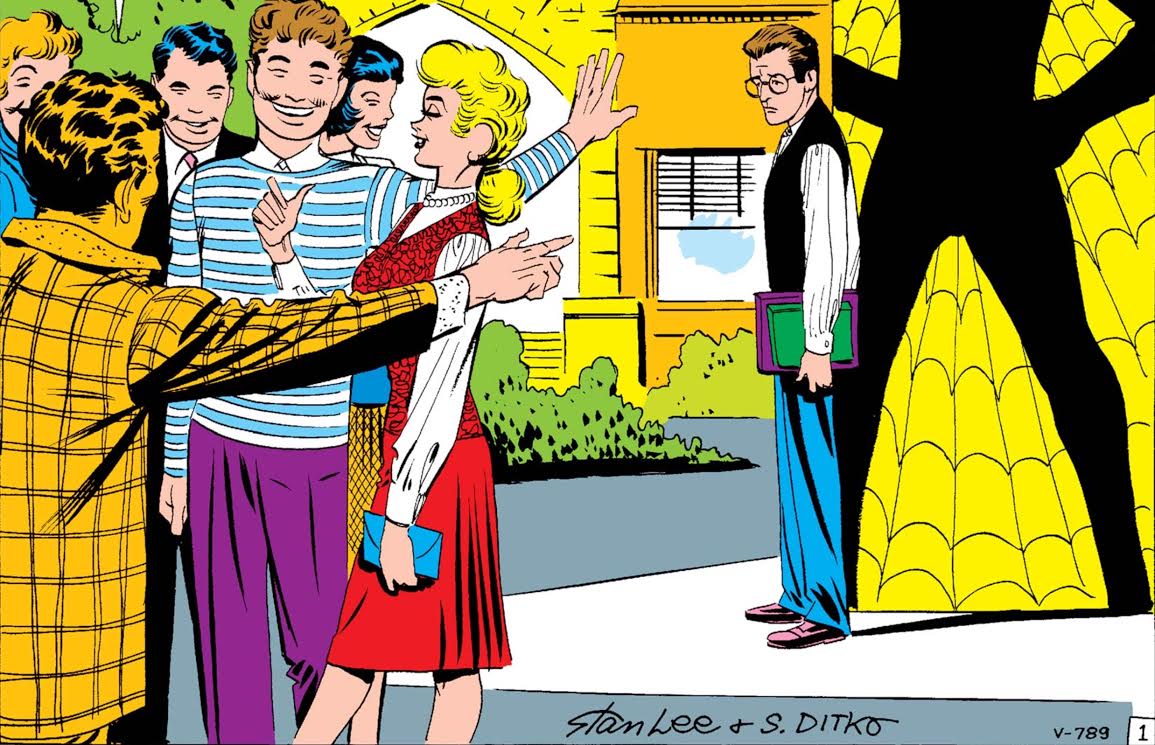 4. Barbara Gordon. Babs is one of my all-time personal favorite comics nerds because she’s got a ton of interests, and she’s not afraid to get geeky with all of them. Whether she’s following her bliss as a bookish librarian who sews her own clothes, or a wonky politician who cares deeply about policy, or a computer expert who helps superheroes around the world as Oracle, Babs never does anything by half-measures — the mark of a true nerd. 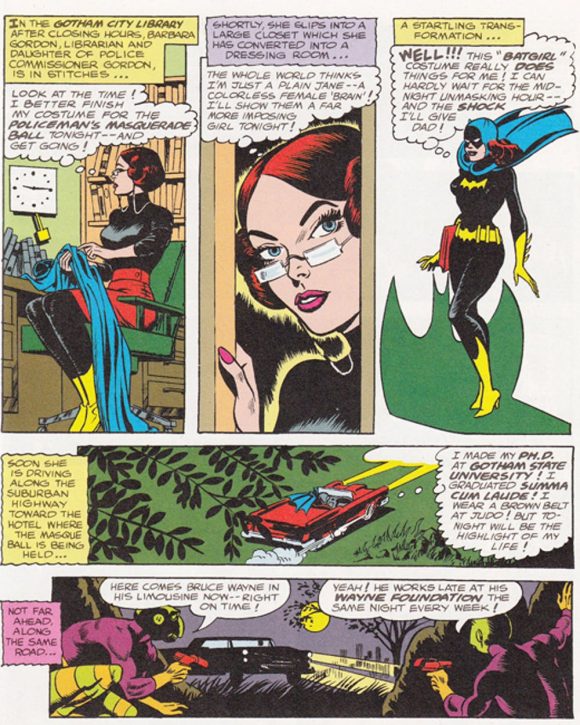 3. Bruce Banner. The Marvel Universe is lousy with nerds, but I believe Bruce Banner is the nerdiest of them all. Bruce is a complex avatar of nerddom that includes the bad as well as the good aspects of what it means to be a geek. He’s a brilliant, wounded loner with anger issues, boundless compassion, and a deep well of self-loathing — which is basically the personality profile of every Reddit power user ever. 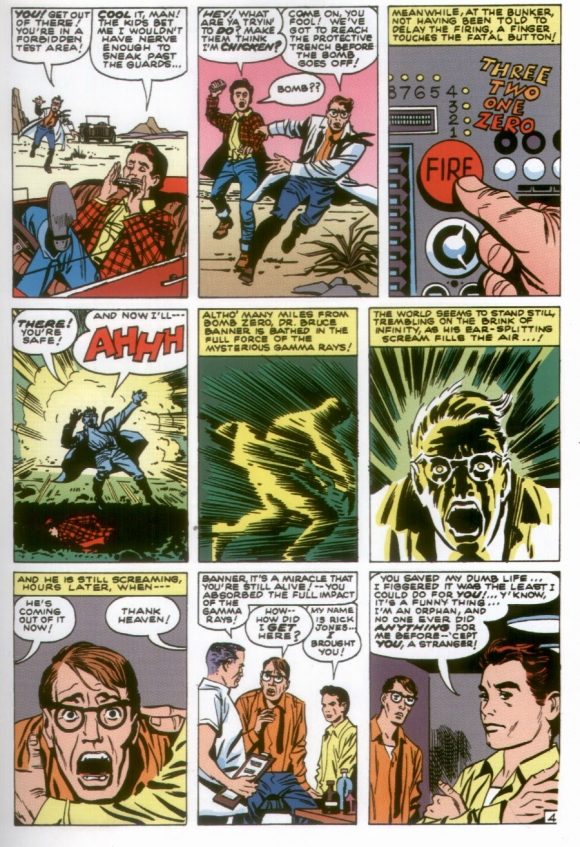 2. Herbie Popnecker. In his surrealistic 1950s-’60s humor series, Herbie Popnecker fought crime as the omnipotent, lollipop-powered superhero known as “The Fat Fury.” But when Herbie went home for dinner, his straitlaced dad would berate him as “a fat little nothing.” Herbie was placid in the face of his dad’s abuse, but his dilemma was instantly identifiable to every fat kid who ever disappointed their dad because they quit the 4th-grade baseball team halfway through the season after their pants split in a failed attempt to steal second base. Uh, so I’ve heard. 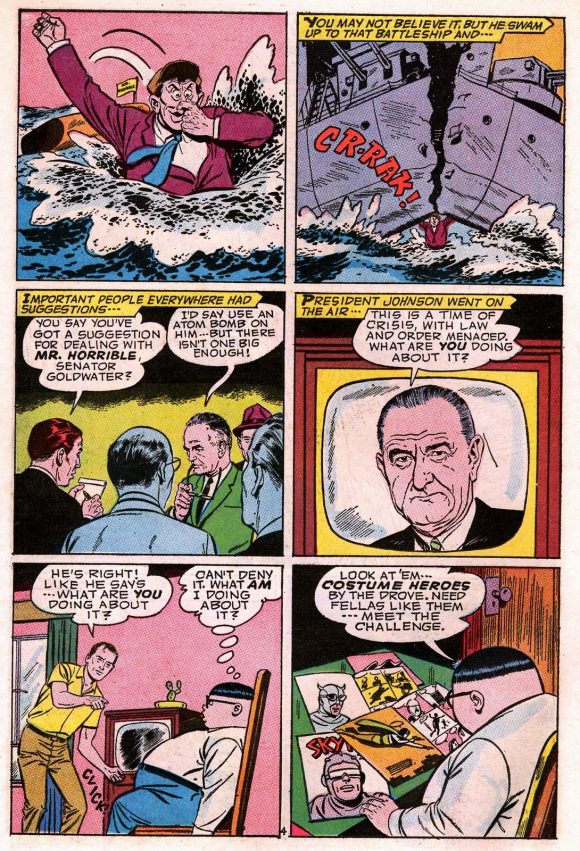 1. Clark Kent. The granddaddy of them all. Clark has been fainting, blushing, running in fear, and being underestimated by tough guys for over eight decades now — and in so doing, he has blazed a trail for generations of comics nerds to follow. In his 1980s Man of Steel reboot, John Byrne tried to recast Clark as a hunky alpha-male football star, but soon enough the character was tugging on his collar and gulping really loudly whenever he had to talk to women, the same way he always had. Clark isn’t cool, and that’s the whole point of Clark. Every great Superman writer understands that the confident, inspiring figure of Superman is the character that nerdy, meek Kansas farmboy Clark Kent puts on when he needs to rise to the occasion. 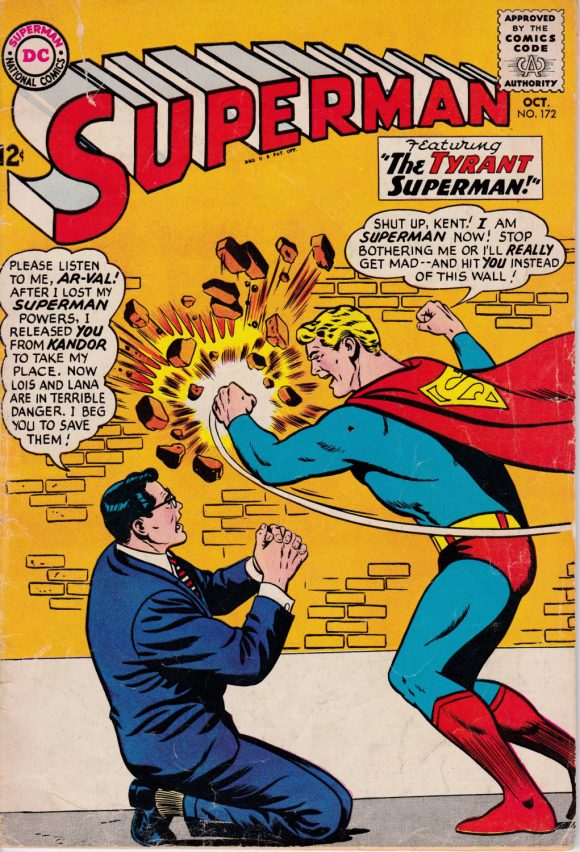