And yes, I said band. Despite their artificial beginnings, Peter, Micky, Mike and Davy did forge themselves into an actual band and that’s one of the things I’m a believer in today—the other being all the marvelous, manic Monkees merchandise.

They didn’t have the bounty of the Beatles, but the Pre-Fab Four had their fair share of retail items and some pretty ginchy, groovy gear at that. So, cheer up, Sleepy Jean, we’re gonna buy me a dog and dive right into 13 examples of all the super stuff you could’ve had back in the day.

Pisces, Aquarius, Capricorn & Jones Ltd. (Colgems, 1967). I want to start right here with what’s become my favorite classic Monkees disc. After the boys got Headquarters out of their systems, they sort of went back to what they’d been doing before axing Don Kirschner, but with them at the controls. I love every cut on this album, but I think the two Moog pieces are among the big standouts. 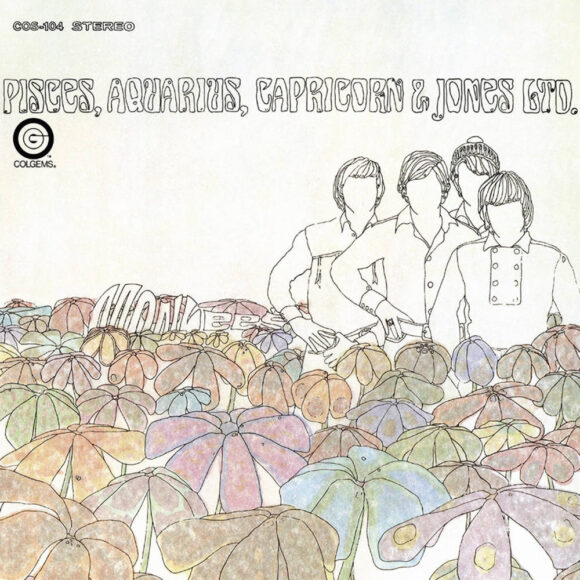 The Monkees #1 (Dell Comics, 1967). Did the Beatles have an actual ongoing comic book series? I think not. The Monkees did and it ran a respectable 17 issues of crazy comic capers, complete with inks by the likes of Dick Giordano, Frank McLaughlin and Sal Trapani. 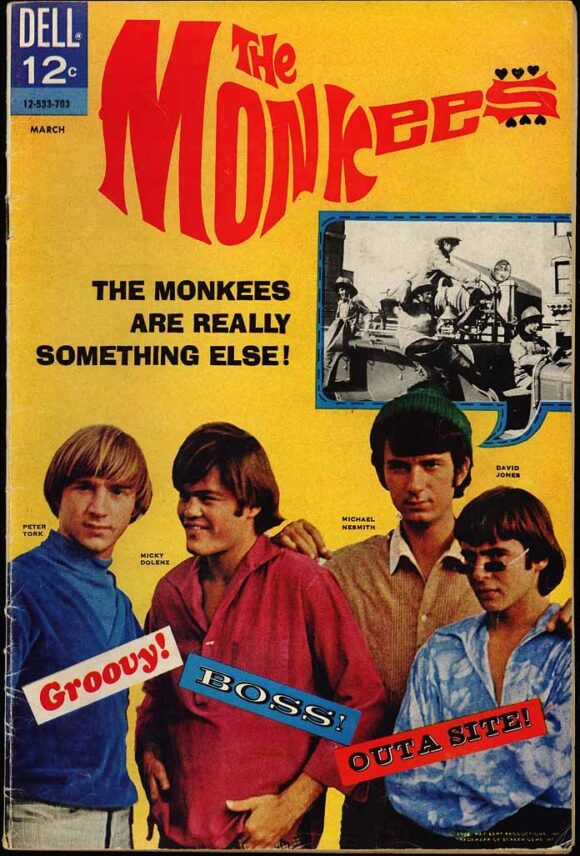 The Monkeemobile (Corgi, 1968). One of the very first reproductions of the famed modified Pontiac GTO convertible seen tooling around on the television screen. This is Hot Wheels size and features tiny little plastic figures of the groovy guys.

Monkees Guitar (Mattel, 1966). The way I see it, kids would hear the albums and want to play Monkees music, but y’know, they’re just kids, so this hand-crank toy stand-in would have to do. Love those graphics. There was also a different version in ’67. 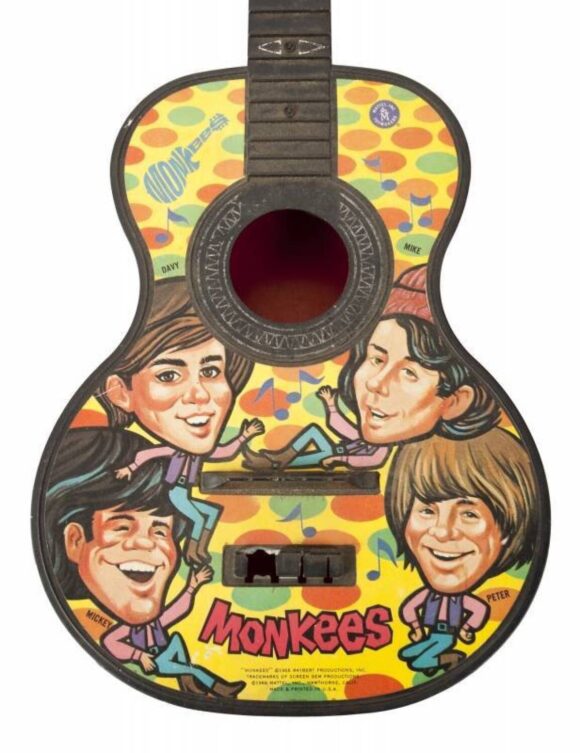 The Monkees Cereal Box Singles (Post Cereals, 1970). Crazy thing is, it’s all true, all of it. I was there and I can attest to the fact that Post had actual, playable 45s on the back of cereal boxes that you cut out and plunked down on your record player. And they really played. And the Monkees were right in the middle of it. 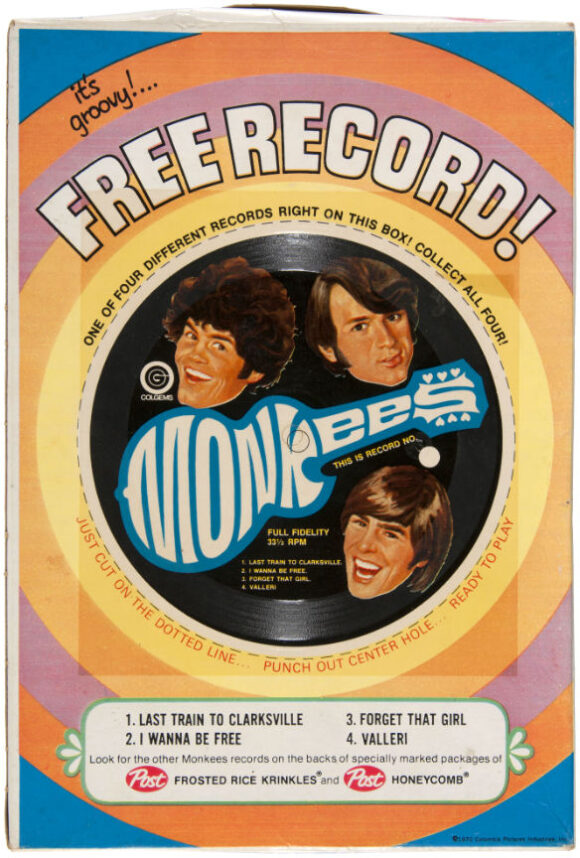 The Monkees Go Mod (Popular Library, 1967). My sister had a copy of this, one of four or five mass-market Monkees paperbacks. They had fluff pieces about the guys, jokes, comic stories, stuff like that. Took you about 10 minutes to read one, but you cherished it if you had it. I think I have all of them now. 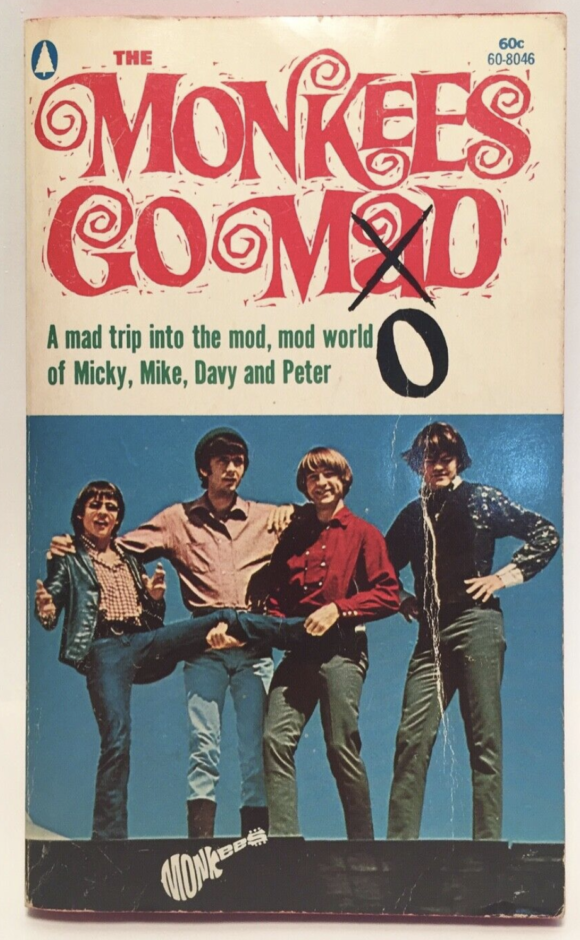 Head (Columbia Pictures, 1968). The first in a series of death-knells for the Monkees, a big-screen production of four guys shooting themselves in the foot. Nobody went to see it back in the day, but today, in my opinion, it’s a fascinating, psychedelic, nihilistic tone-poem about everything and nothing. And the soundtrack is fantastic.

TV’s The Monkees Talking Hand Puppet (Mattel, 1966). Every time I look at this it reminds me of the cover of 1962’s Justice League of America #10. And that’s really the only reason I need to give here to have it on my list. 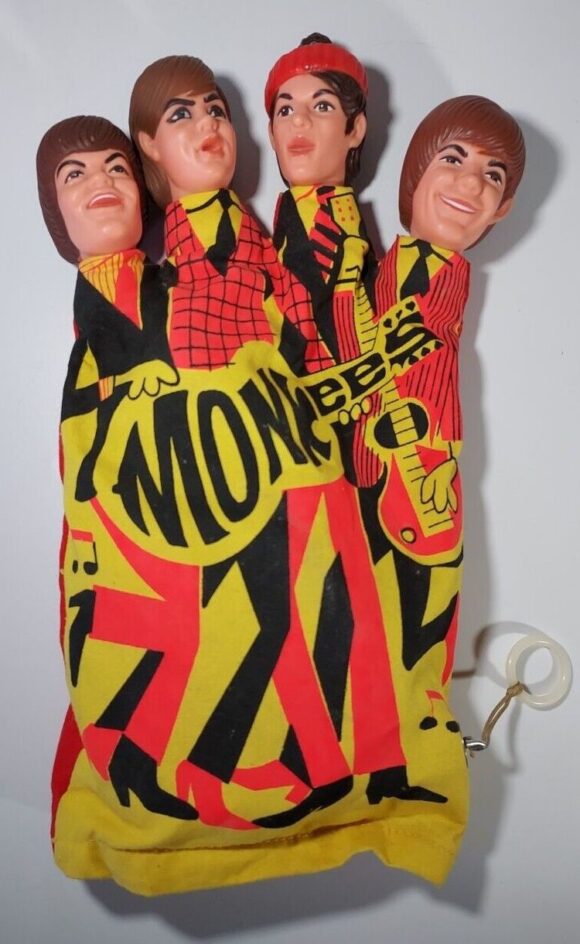 The Monkees: Who’s Got the Button? (Whitman, 1968). This one is truly incredible to me, because as far as I know, it’s the one and only original, official Monkees prose novel. How does the writer maintain Monkees antics across an entire fiction (albeit kids’ fiction) book? Get a copy and see for yourself. It’s genuinely a one-of-a-kind piece of tie-in merchandise.

Headquarters (Colgems, 1967). This is the album that was Number One on the charts until pushed down to Number Two by a little thing called Sgt. Pepper’s Lonely Hearts Club Band. That said, Headquarters stayed in that second slot throughout the Summer of Love and along with the Beatles formed a best-selling duo that to this day still blows me away. Raw and raucous, it’s the Pre-Fab Four off the leash and makin’ some garage band sounds like nobody’s business. 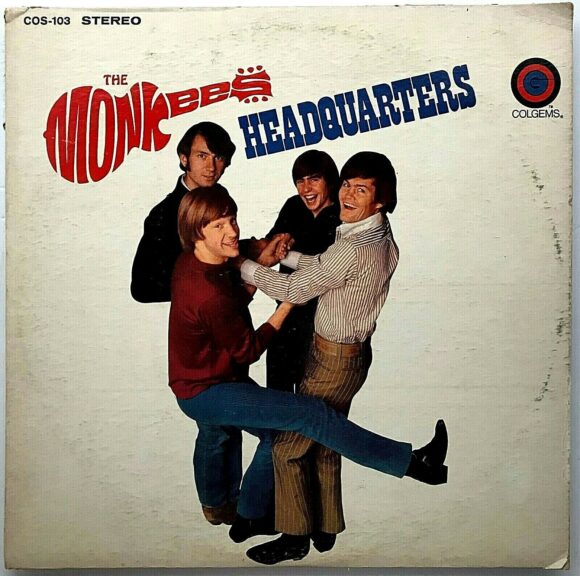 Monkees Costume (Bland Charnas, 1967). I had some recollection of their being real, honest-to-goodness Monkees Halloween costumes for kids back in the day, but kind of wrote it off as a fever dream. But here it is and it’s as wonderful as I thought I’d imagined it. 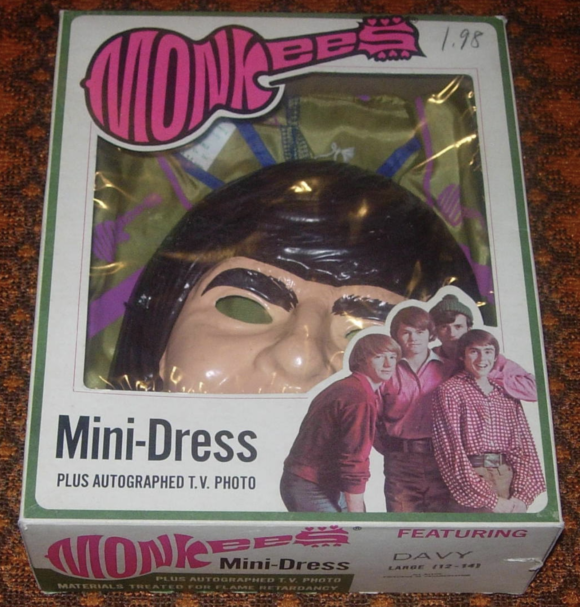 Monkees View-Master Set (GAF, 1967). There are many measures of success for products, and the Monkees could claim to have reached and exceeded those measures, but for my money an official View-Master set means you have arrived. 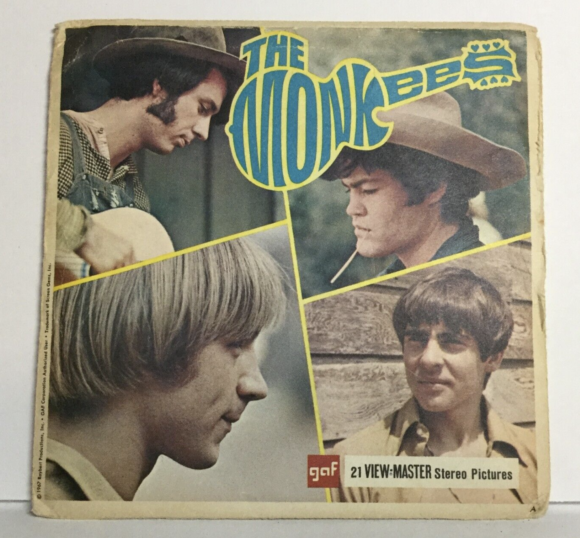 Good Times! (Rhino Records, 2016). I’m going to wrap up this list by heading back to the future and rolling out a modern Monkees masterpiece—just this once. Davy was gone by this point, but Micky, Michael and Peter set out to get back upon their feet to recreate some of the ol’ Monkees magic on this one, and boy did they. Fantastic songs by fantastic writers with fantastic musicians, and everybody obviously having a, ahem, good time. Nice capper on the legend. 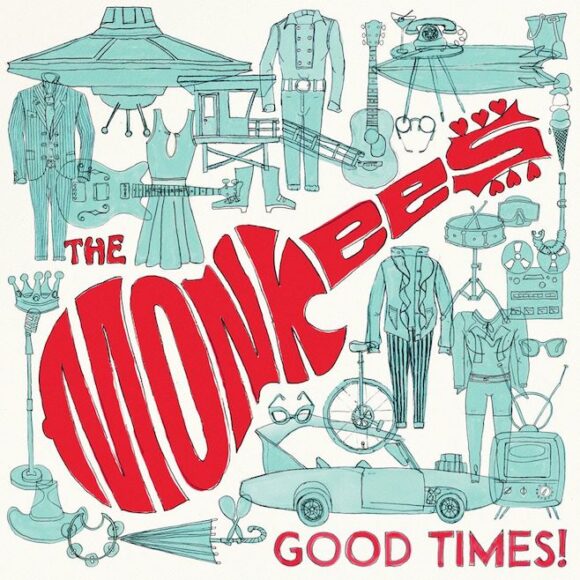