13 Classic Easter Eggs in BATMAN: THE BRAVE AND THE BOLD

Home » BATMAN'S HOT-LINE » 13 Classic Easter Eggs in BATMAN: THE BRAVE AND THE BOLD

A colorful tour through the Golden, Silver and Bronze Ages…

For BATMAN WEEK, we’re looking at all sorts of interpretations of the Caped Crusader and one of our favorites is the show Batman: The Brave and the Bold, which is a love letter to the Caped Crusader’s Golden, Silver and Bronze Age roots. The animated series celebrated its 10th anniversary last fall and producer James Tucker — who is one of our expert panelists for the 80th Anniversary TOP 13 BATMAN COUNTDOWN (click here) — dropped by to share some of the show’s concept art (click here) and to list his Top 13 episodes (click here).

Well, we’ve got one more to add: Travis Meidell, who on Instagram chronicles the history of Batman in animation — click here for his great video on the Joker — has put together a list of 13 Easter eggs to be found in B&B. (Actually, there are more than 13, but you’ll see.) 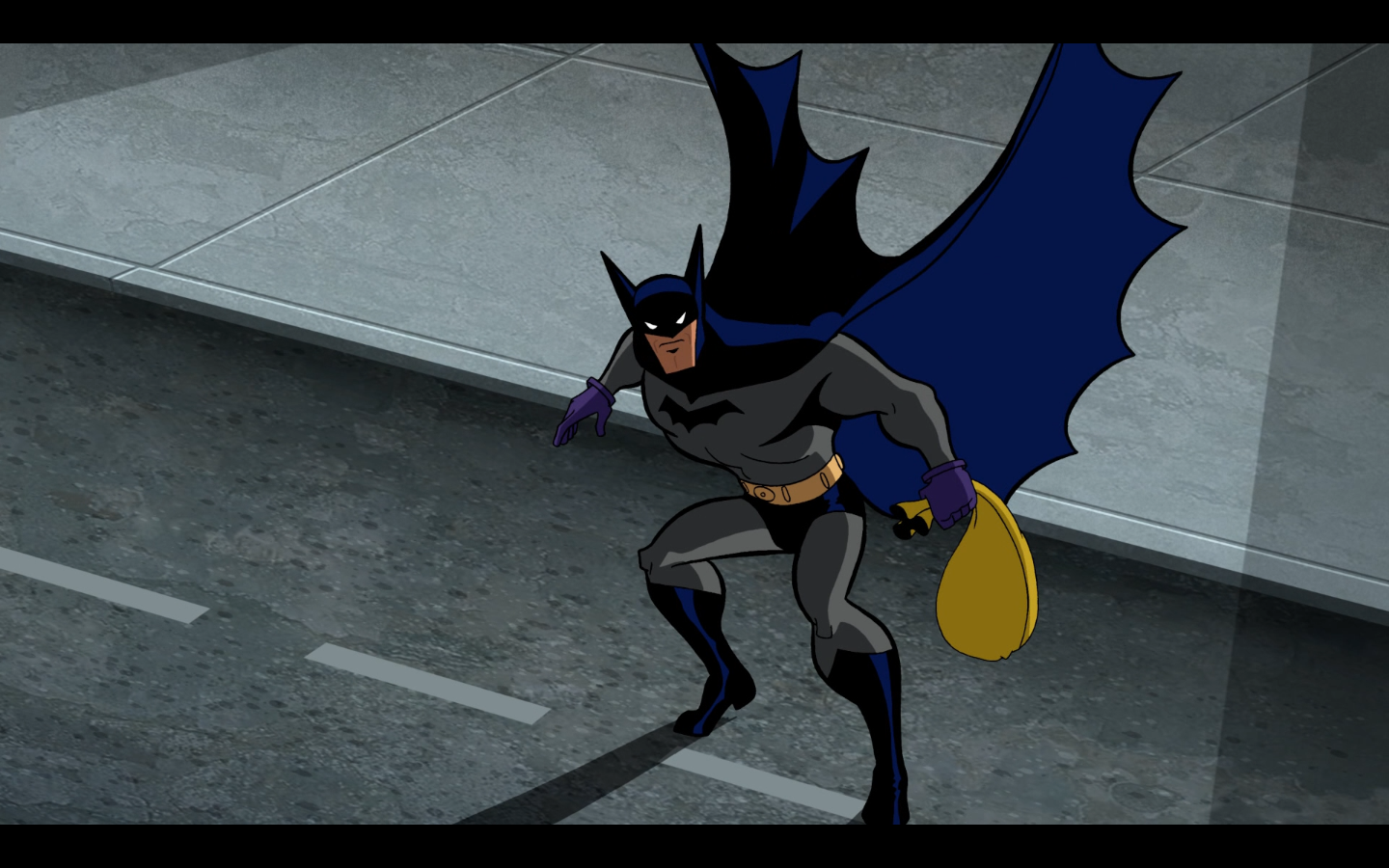 When I first stepped into comics in the early ’90s, the Silver Age had ended its run decades earlier, yet something drew me to it. It was probably because my exposure to comics didn’t come with foil variant covers or million-plus issues printed. It came from my stepdad’s vintage collection, which had classic Superman titles like Action Comics, Superman’s Pal Jimmy Olsen, Adventure Comics and others.

But it wasn’t the many Super-titles that really caught my eye. It was a single Batman issue — #183. The idea of Batman leaning back, ignoring his duties to watch his own show was ludicrous. Yet, as the cover blurb promised, there was a clue on the cover as to why Batman was doing this. I was sucked in. 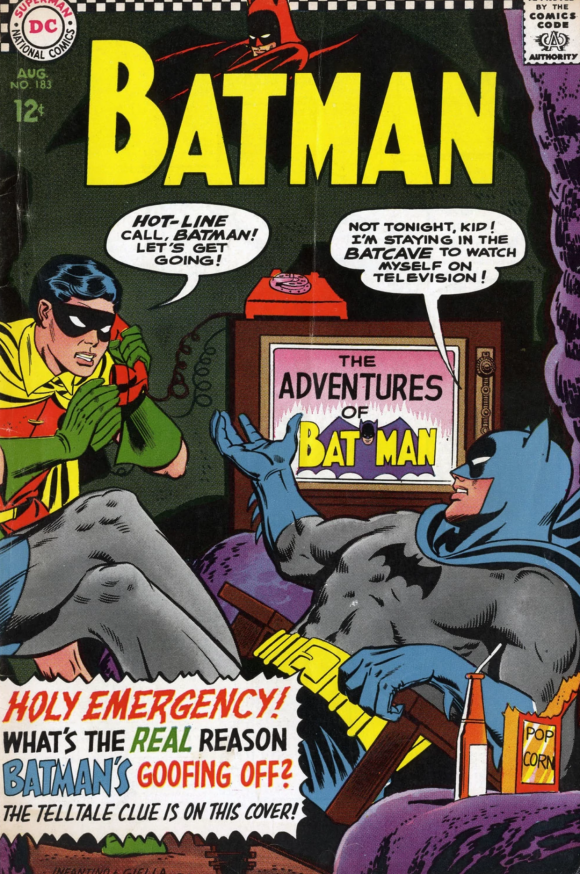 While I would continue to get current Batman titles, my love of the Silver Age never faded, and to this day, I still spend most every convention digging through back-issue bins of Batman, Detective Comics and Brave and the Bold.

The reason I mention all this is because when the animated show, Batman: The Brave and the Bold premiered on TV in 2008, I knew almost right away that this show was something special. It was an unabashed love letter to Batman’s mythology in the Golden, Silver and Bronze Ages. 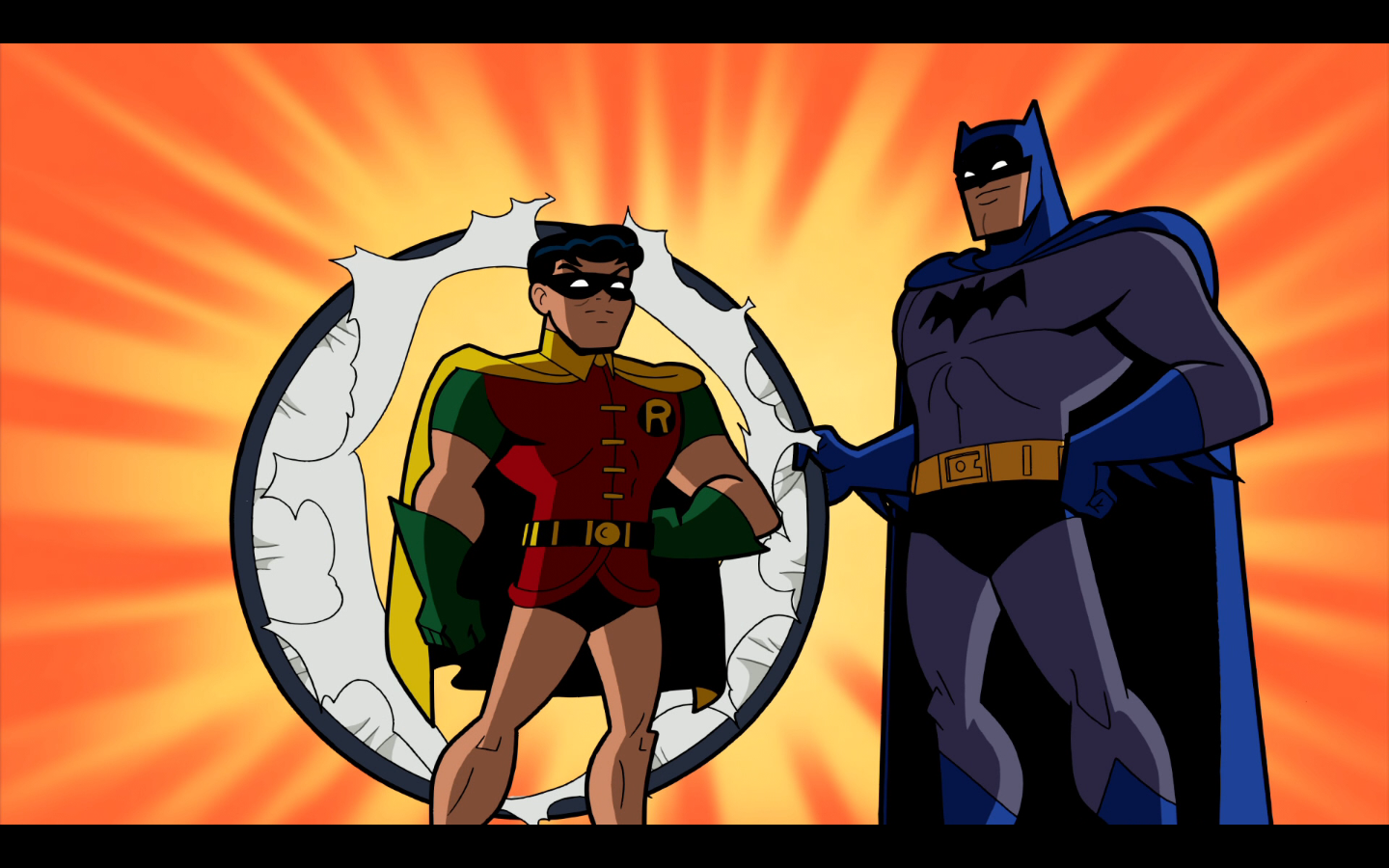 So, without further rambling, here are 13 CLASSIC EASTER EGGS IN BATMAN: THE BRAVE AND THE BOLD (and then some):

1. Game Over for Batman! While off-world helping Red Hood stop the Injustice Syndicate, Batman is framed for crimes by his evil doppelgänger, Owlman. Not only was this episode the first time the show introduced us to Joker, but it is oozing in Easter eggs from Batman’s history. Owlman wears Batman’s Golden Age costume (with purple gloves), and we get a look at the Jokermobile from Batman #37. There are also cameos from several alternate reality Batmen, including Bat-Hulk from 1966’s Brave and the Bold #68; Vampire Batman from the Red Rain trilogy; Captain Leatherwing, a Bat-pirate from 1994’s Batman: Leatherwing; and the Batman of 800,000 AD from World’s Finest #151. 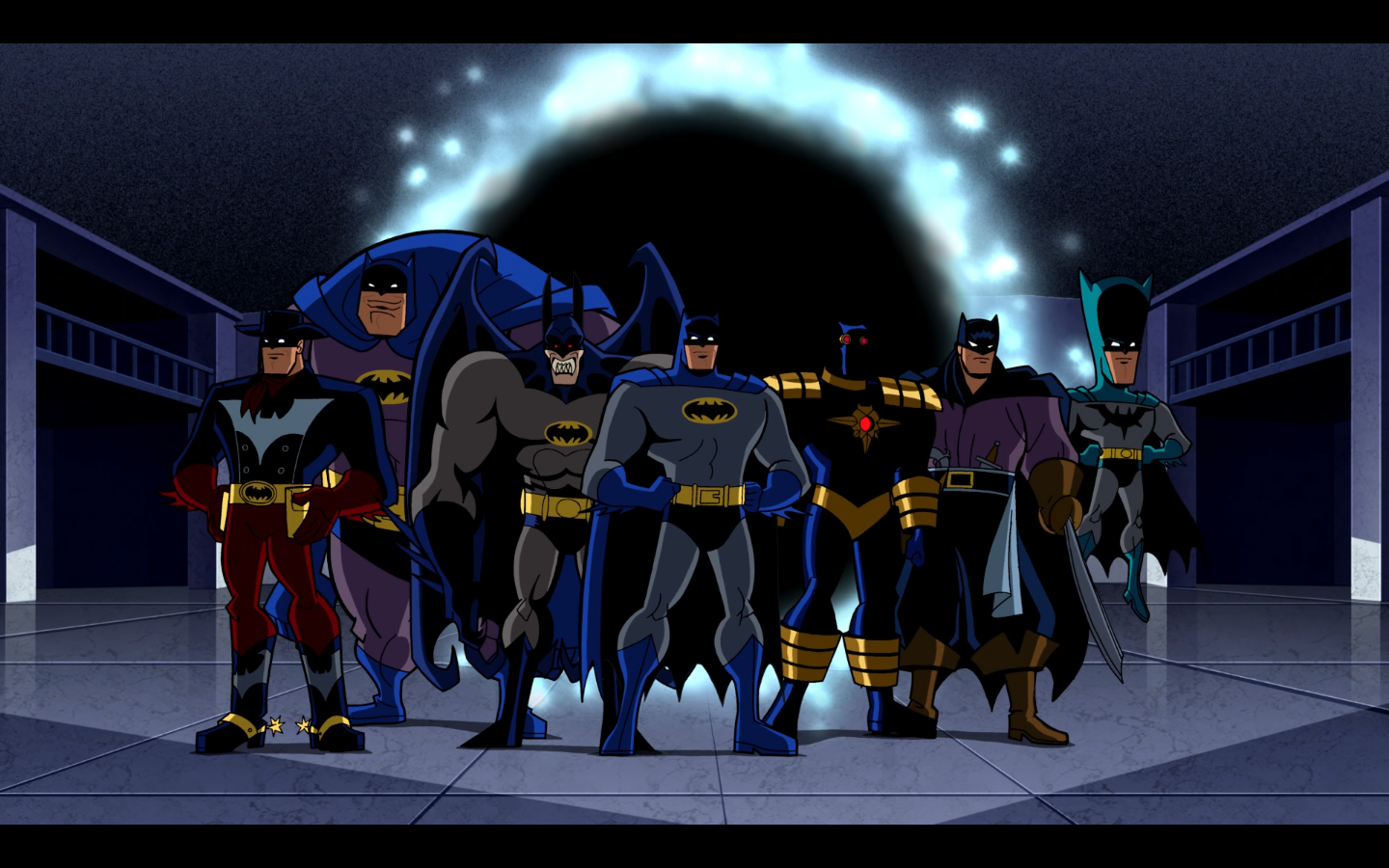 2. The Color of Revenge! This episode plays as a sort of sequel to Len Wein’s Crazy Quilt story from 1979’s Batman #316. After Robin unintentionally blinds Crazy Quilt in the cold open, our story jumps forward some years later where we find Quilt still angrily blaming Robin for his blindness. He not only condemns Robin but has become OBSESSED with him, creating a handful of weird Robin art. Eventually, Quilt escapes Arkham and heads straight to Blüdhaven where Robin resides as the local hero.

3. Legends of the Dark Mite! When Bat-Mite decides to be Batman, his imagination runs away with him in a scene that is a fun tribute to the classic Looney Tunes cartoon, The Great Piggy Bank Robbery. Several classic Silver Age villains chase poor Bat-Mite through a weird world with homages to the House that Joker Built (Detective Comics #365), Riddler’s first appearance (Detective Comics #140), Two-Face’s coin and more. Awesome-sauce. 4. The Last Patrol! With Batman trapped by Killer Moth, Batgirl comes to his rescue and the two team up to make sure this “larcenist lepidopterist” is “molting in the state pen.” Those are Batgirl’s exact words — and if those aren’t the words of a librarian, I’ll eat my chapeau. This intro is a nice throwback to Batgirl’s comic-book origin from 1967’s Detective Comics #359, The Million Dollar Debut of Batgirl. In that story, Barbara Gordon attends a costume party dressed as a female Batman and ends up stopping Killer Moth in his attempted kidnapping of Bruce Wayne. (UPDATED: We’ve heard from James Tucker himself, who clarifies: “The Batgirl intro was mainly inspired by her rescue of Batman and Robin from her Batman’ 66 TV debut, mixed with the unaired pilot where the villain was Killer Moth — which was inspired by the comic.”) 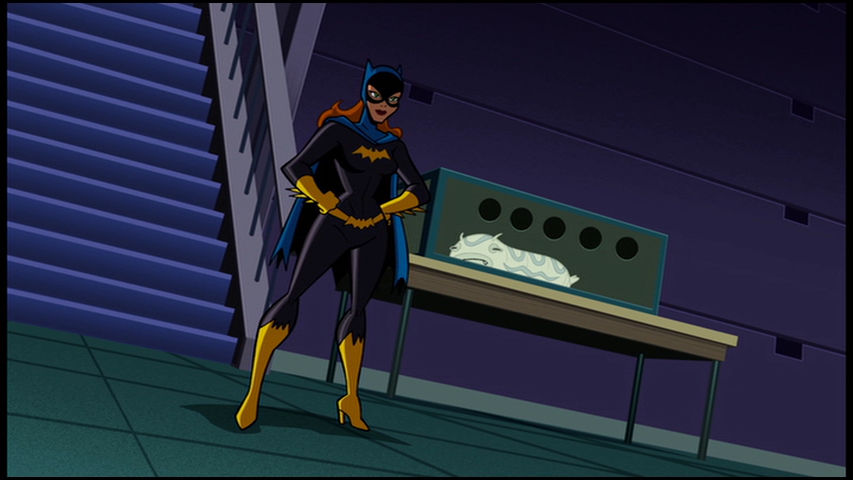 5. Emperor Joker! The opening stinger to Emperor Joker! is a tribute to Silver Age issues Detective Comics #241 and Batman #134. The episode finds Batman wearing a different colored uniform every night to battle Firefly. (Batman has discovered that Firefly’s color weapon does not work against items of the same color.) Firefly summons a “rainbow creature,” but Batman doesn’t even blink as he transforms his suit into a multi-hued outfit that can resist every color. 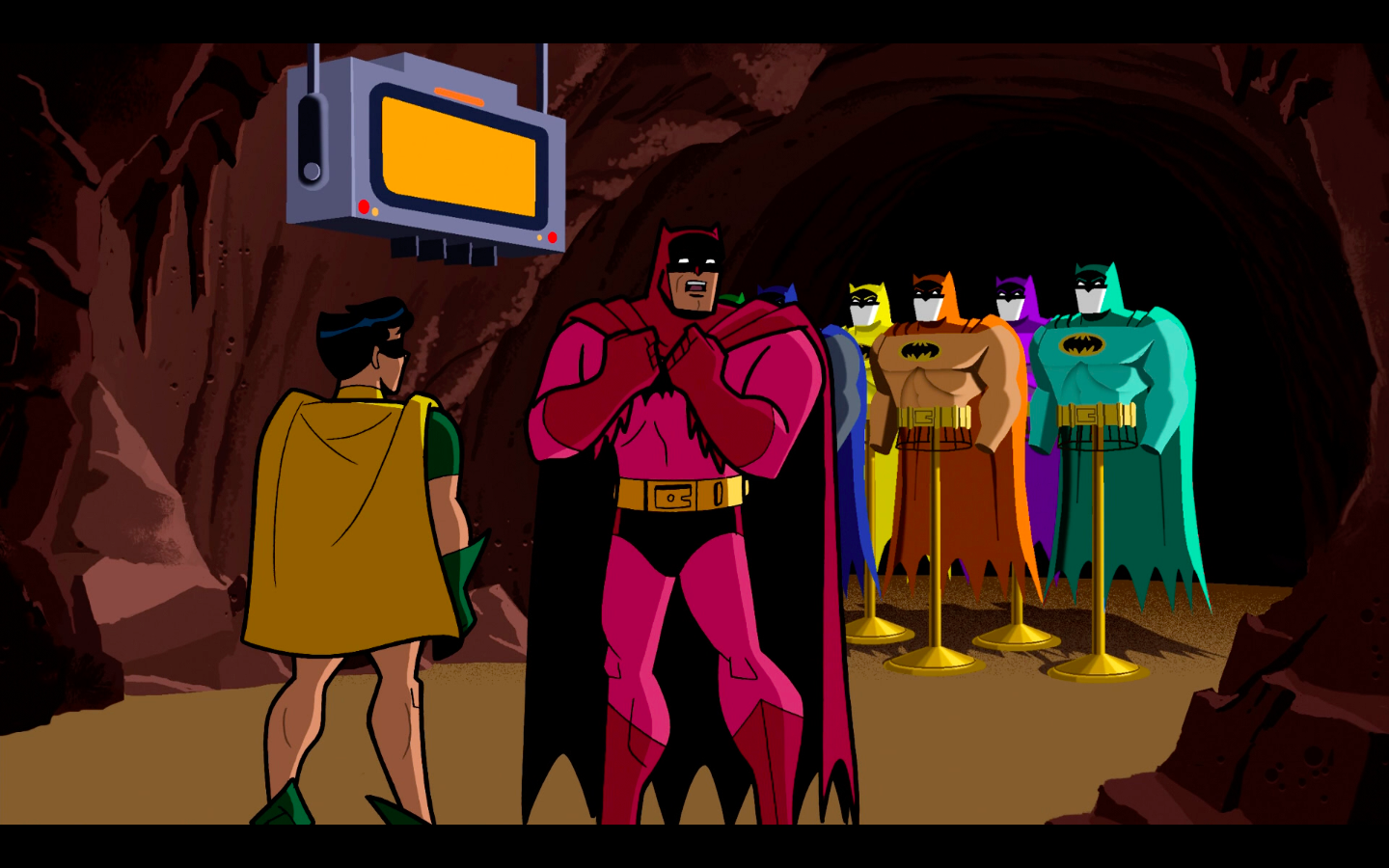 6. Knights of Tomorrow! The plot is loosely based off 1962’s Batman #145, which is a short story about Batman’s future “written” by Alfred. The episode (also narrated by Alfred) takes us through Batman’s history, starting with nods to Detective Comics #27, Detective Comics #38, and even a wink to the Batman ’66 opening credits. Eventually, Batman marries Catwoman, and they have a son, Damian. Following the untimely deaths of Bruce and Selina, Damian and Dick team up to take down the Joker and his “son” as well as a variety of foes from Grant Morrison’s run, including Professor Pyg, Mister Toad, Flamingo, El Sombrero, Scorpiana, Charlie Caligula, Pierrot Lunaire and King Kraken. 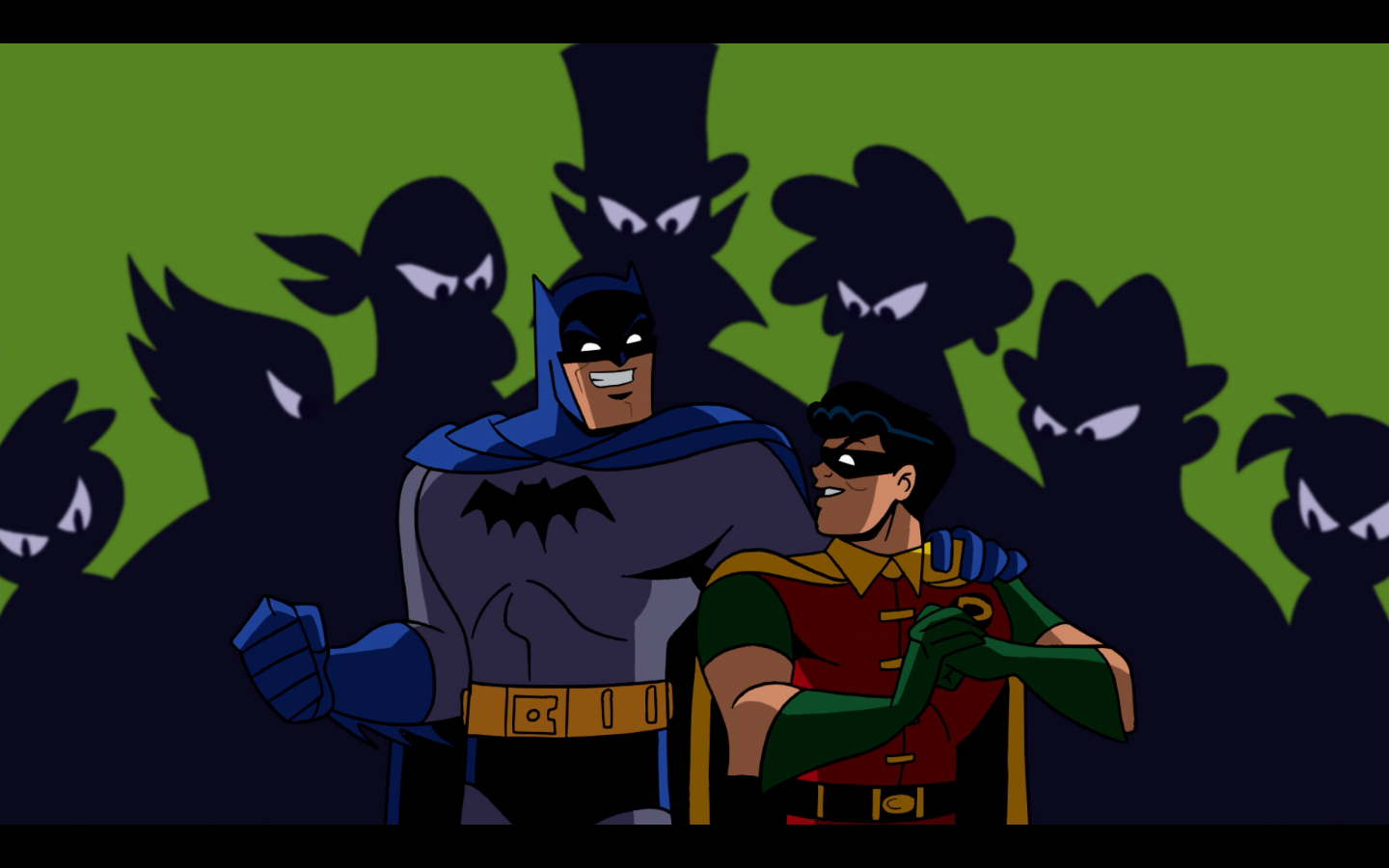 7. Bat-Mite Presents: Batman’s Strangest Cases! Bat-Mite reveals he can peek into every dimension and wants to share some unique versions of Batman. The stories used here are Batboy and Rubin! (from 1953’s Mad Magazine #8); Jiro Kuwata’s manga adaptation of 1966’s Batman #180; and, Batman Meets Scooby-Doo (a riff on their team-ups from The New Scooby-Doo Movies in the early ’70s). The Scooby short also included a Super Friends-esque safety message about fighting sharks, and if that isn’t a wink at Batman ’66, I don’t know what is! 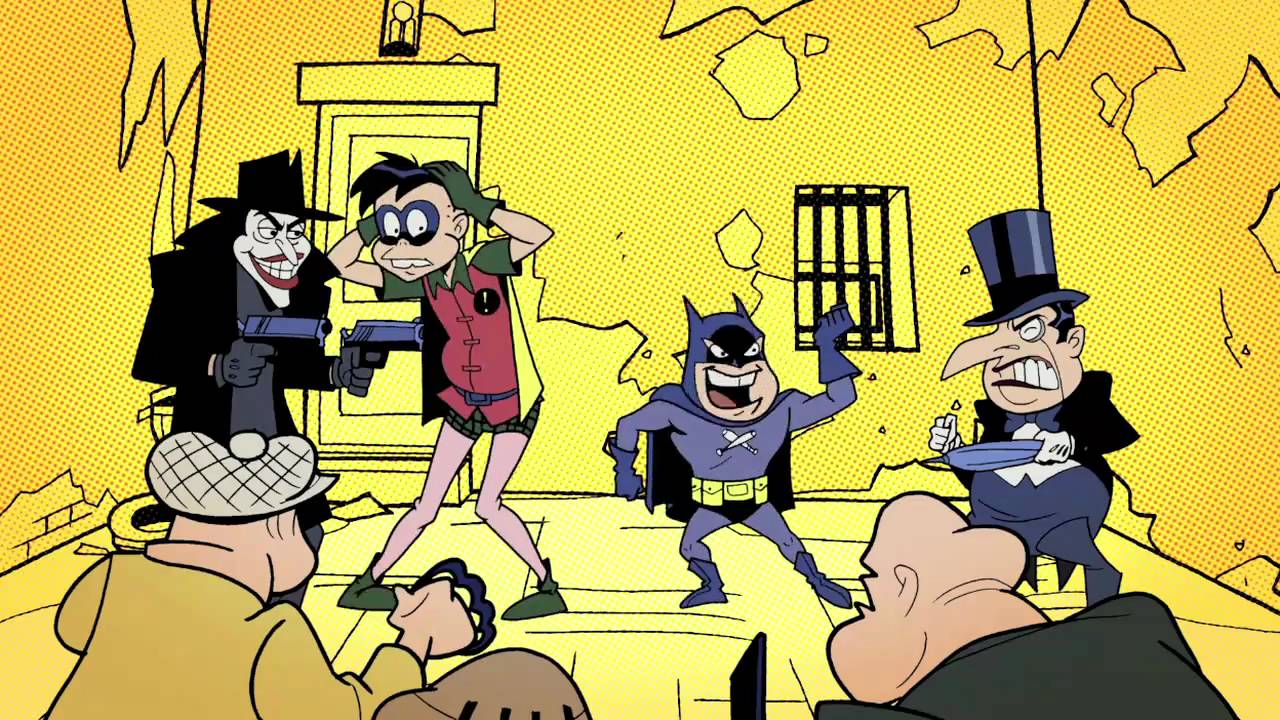 8. Shadow of the Bat! Here, we get a cold-open From the Secret Files of the Bat-Computer with Batman and Robin in the jungle battling Catwoman with help from Bat-Ape, whom Batman describes as “a loyal partner in the fight against jungle-based crime.” The short is a combination of three Silver Age Bat-tales — from Batman #113, The Secret of the Mechanical City; Batman #172, The Jungle Batman; and, Detective Comics #211, The Jungle Cat Queen. 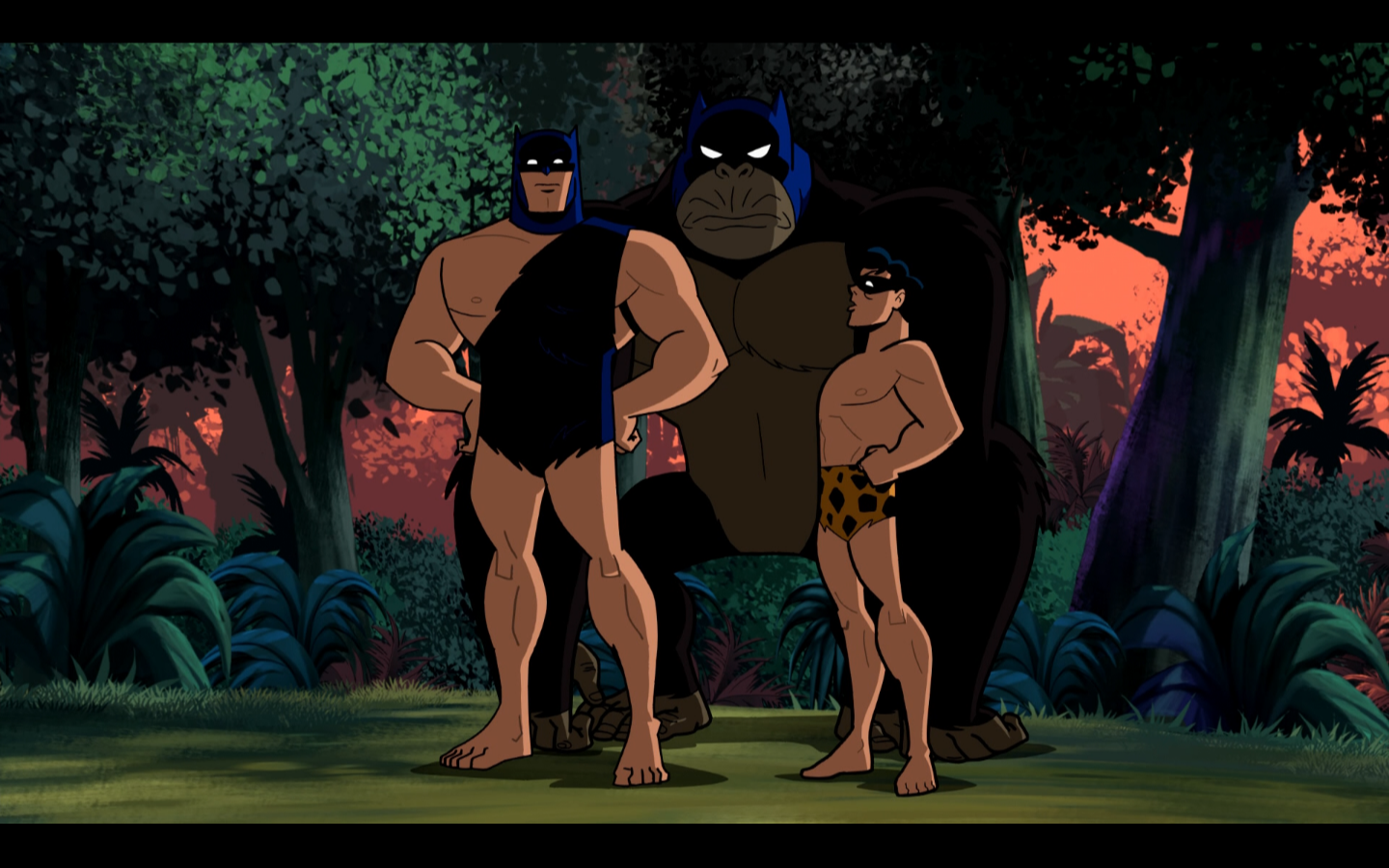 9. Battle of the Superheroes! Another From the Secret Files of the Bat-Computer opening short – this one a tribute to Detective Comics #320. However, this is a double-whammy, with King Tut from Batman ’66 as the villain (under a different name because of rights issues). 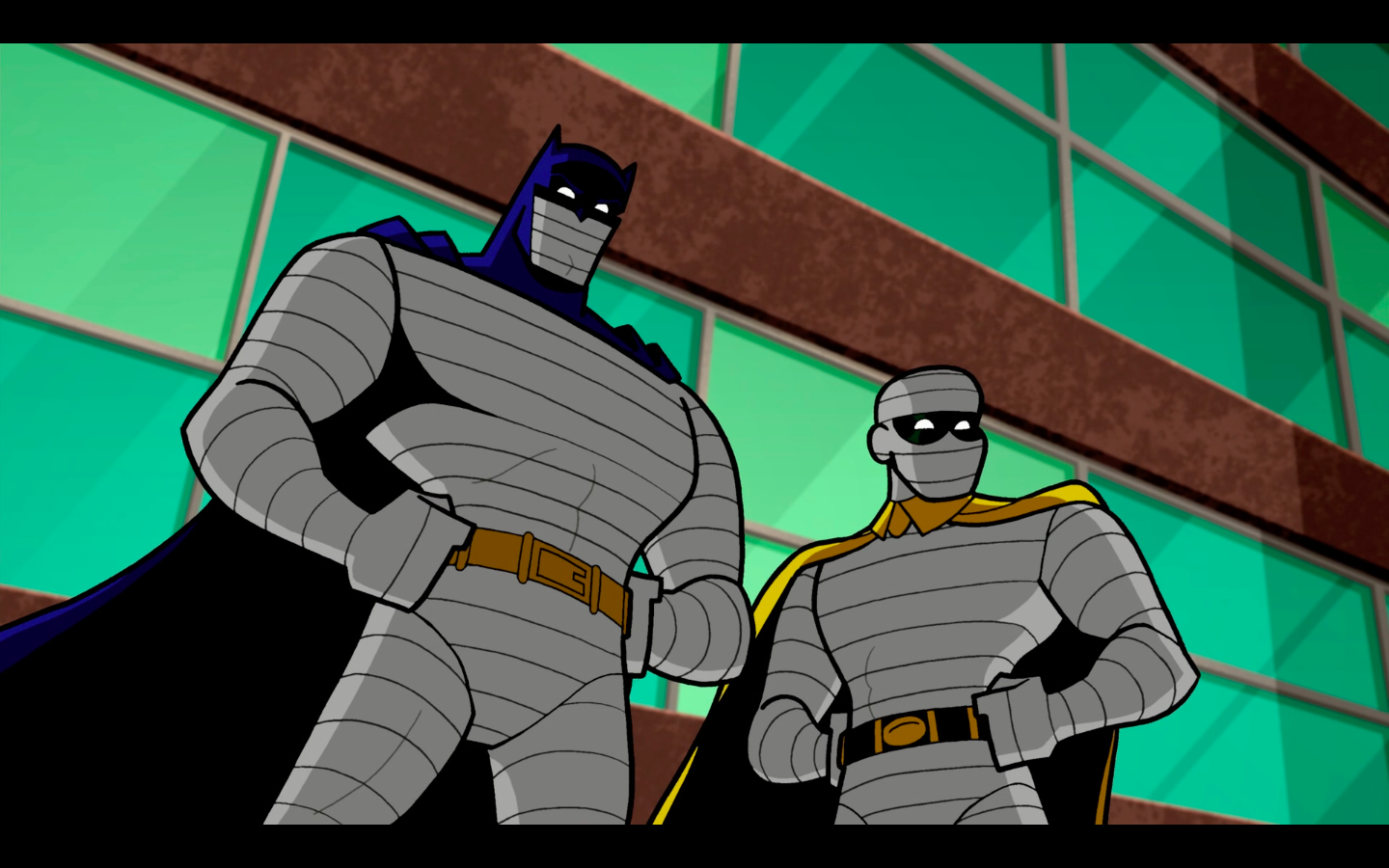 10. Powerless! In this one we find the Batmen of All Nations from Detective Comics #215. Joining Batman in the story are El Gaucho (Argentina), Knight (UK), Legionary (Italy), Musketeer (France), Ranger (Australia), Wingman (Sweden) and Impala (Africa). That last one is the only one created specifically for the show. The team is attacked by the Joker, who brings with him the Jokers of all Nations — including an Eskimo Joker, Japanese Joker, Canadian Joker, Russian Joker and Scottish Joker. (UPDATED: Tucker clarified this one, as well: “Impala is from the Bronze Age Super Friends comic and was on the team the Global Guardians, where Fire first appeared. I always tried to find comics-specific versions instead of creating new ones when time and access allowed.) 11. Joker: The Vile and the Villainous! The Joker takes over the show entirely in a tribute to 1976’s Justice League of America #136. The Clown Prince of Crime teams up with a villain named the Weeper, who was created in 1942 as an arch-villain for Bulletman and Bulletgirl from Fawcett Comics. (Not to be confused with Willie the Weeper from 1975’s The Joker #2.) Bonus: We get another peek into the bar of forgotten Silver Age villains like Polka-Dot Man and the Eraser. 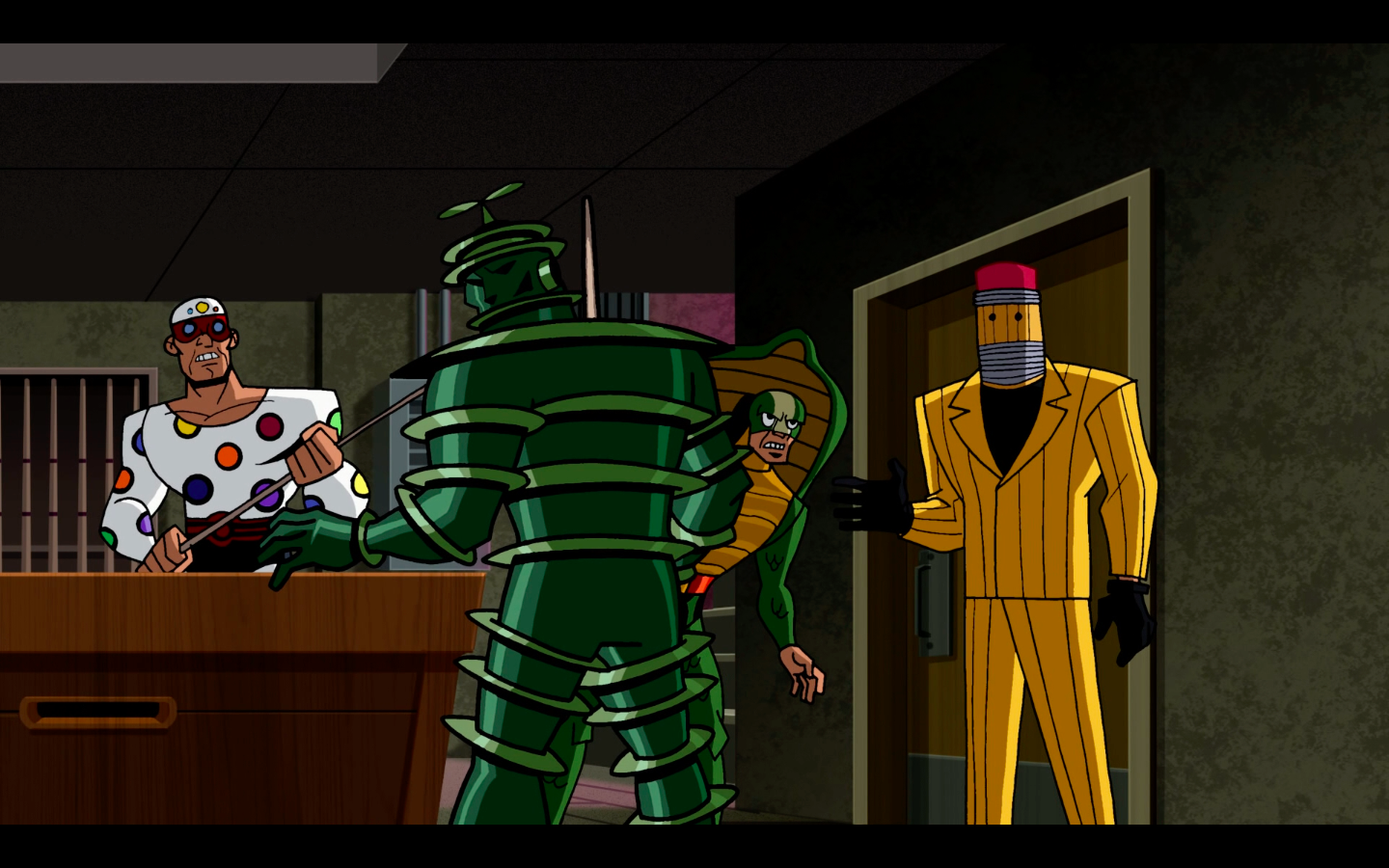 12. The Super-Batman of Planet X! This whole episode is a pretty straight adaptation 1958’s Batman #113. In the episode, Batman gets trapped in a wormhole and sent to the distant planet Zur-En Arrh. He discovers that he has superpowers similar to Superman’s, and he meets his alien doppelgänger, a fellow named Tlano, who is voiced by the great Kevin Conroy. 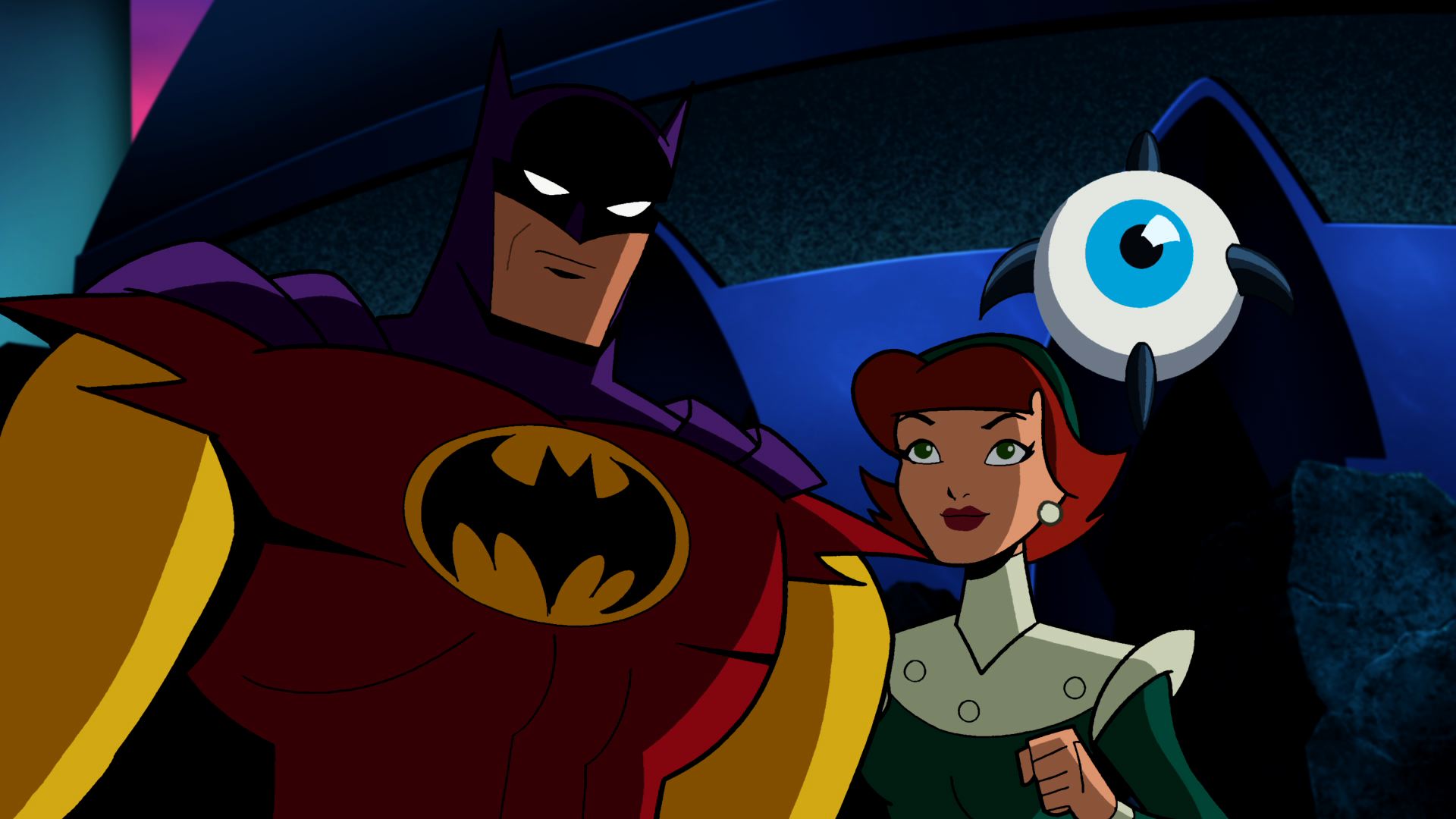 13. Scooby-Doo! & Batman: The Brave and the Bold. In 2018’s direct-to-video feature, there’s a reference to the Mystery Analysts of Gotham City, who first appeared as a backup feature in 1964’s Batman #164. The Analysts were a group of detectives who met regularly to solve “bizarre mysteries.” The original club included a mystery writer, an amateur sleuth, a criminal justice professor, an ace reporter, the district attorney, Commissioner Gordon and, of course, Batman. 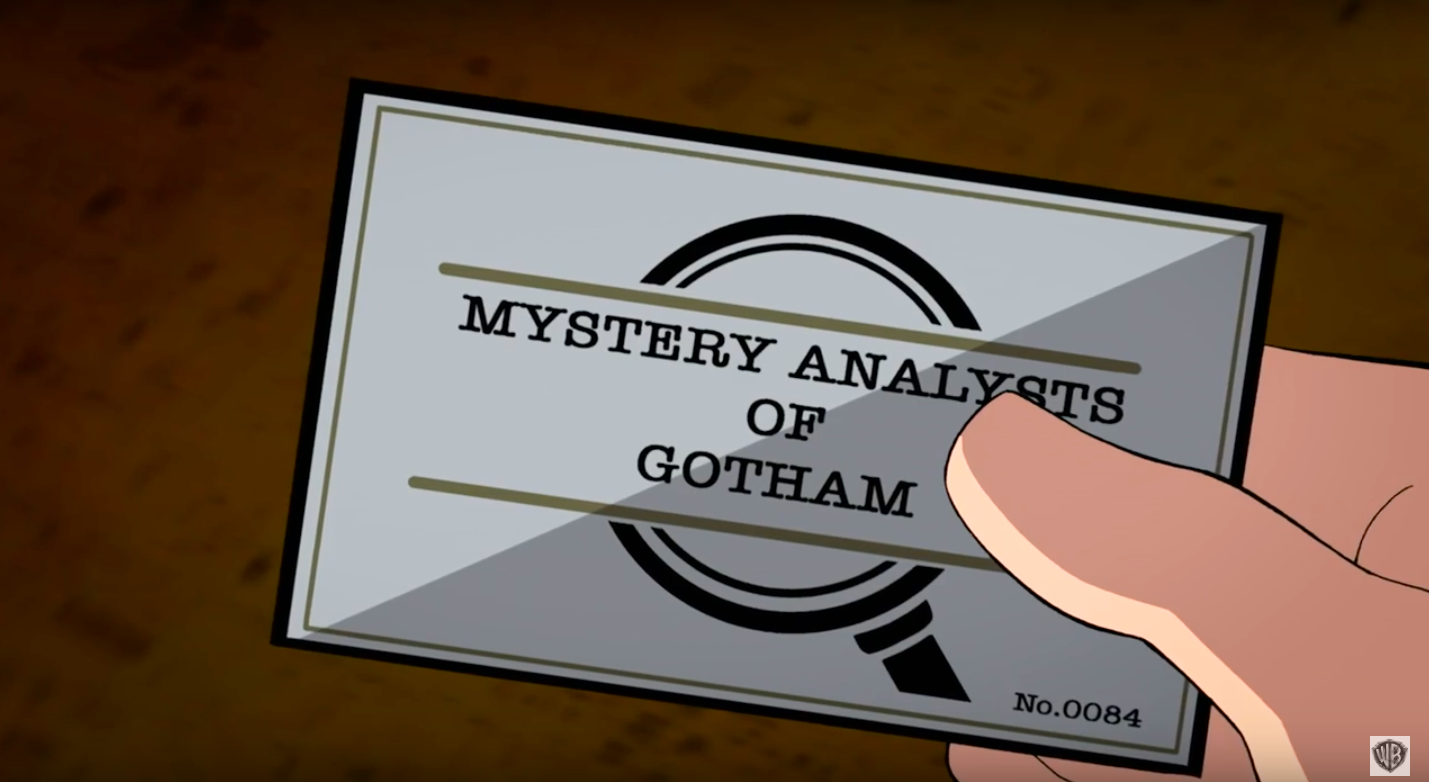