13 CHARACTERS I Wish We Included in DC’s WHO’S WHO, by Robert Greenberger

Home » COMICS HISTORY » 13 CHARACTERS I Wish We Included in DC’s WHO’S WHO, by Robert Greenberger

The long-awaited DC Who’s Who Omnibus Vol. 1 is finally out and we couldn’t ask for a better insider to take us through it than Bob Greenberger, an historian and former DC editor who was deeply involved in the original 1980s series.

Plus, don’t forget Bob’s latest project: Thrilling Adventure Yarns 2021, the latest such anthology from Crazy 8 Press. (Click here for info, including how to order.) 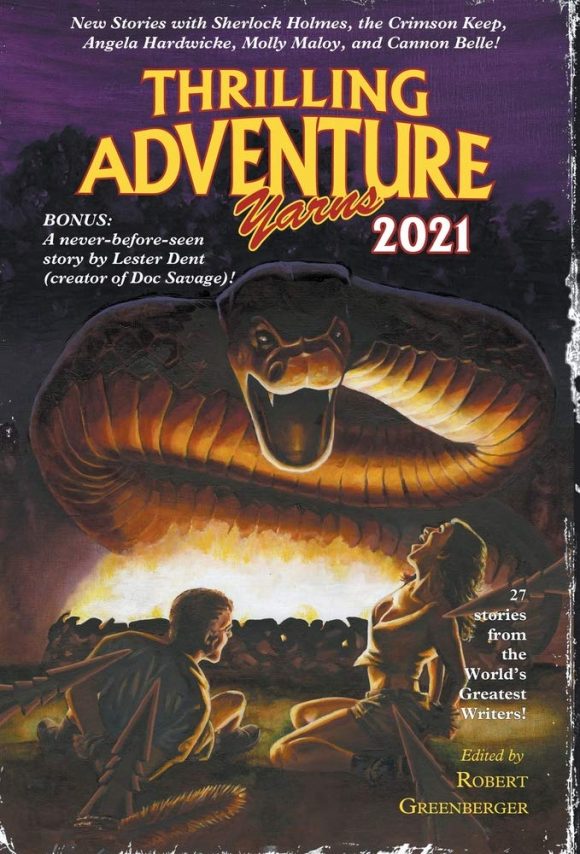 Who’s Who: The Definitive Directory of the DC Universe was designed to celebrate the company’s 50 years of publishing. The thinking was to include the seminal heroes and villains from the war, Western, mystery and superhero genres. In the interests of space, we had to eliminate characters who made brief appearances; I believe it was a three-appearance threshold for these genres.

The company also published funny animal, funny character and romance titles – among others — several with series that technically deserved consideration. Ideally, we would have had pages available to include them. Looking back, here are the ones I wish we had found room for, in alphabetical order:

Beowulf. The Anglo-Saxon hero is required reading in most every high school in America, first depicted in the Nowell Codex, and his exploits have been translated time and again, most recently by the poet Seamus Heaney. 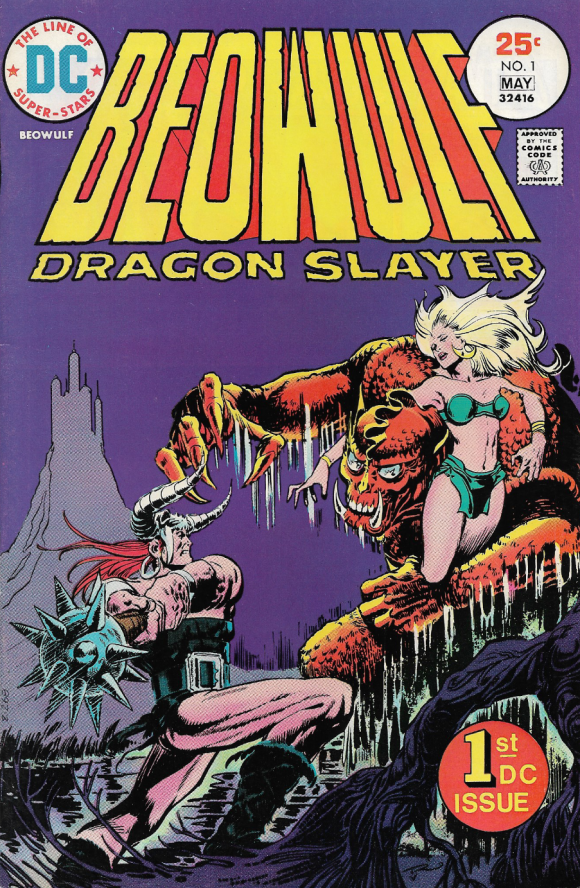 For DC, junior woodchuck Michael Uslan created the character at a time when the company was expanding in the sword and sorcery genre. Illustrated by Ricardo Villamonte, he debuted in his own series. He fought Grendel and other beasts, took on whole armies, and romanced beautiful women. These stories were inspired by the legends but did not hew too closely; this hero, among literature’s first, deserved a spot.

Binky Biggs. A few years after the arrival of Archie Andrews, every publisher had their own goofy teen heartthrob. DC’s Leave It to Binky arrived in 1948 and lasted a decade before a semi-successful revival in 1967, lasting to 1971. The series was popular enough to spawn a short-lived spinoff, Binky’s Buddies. 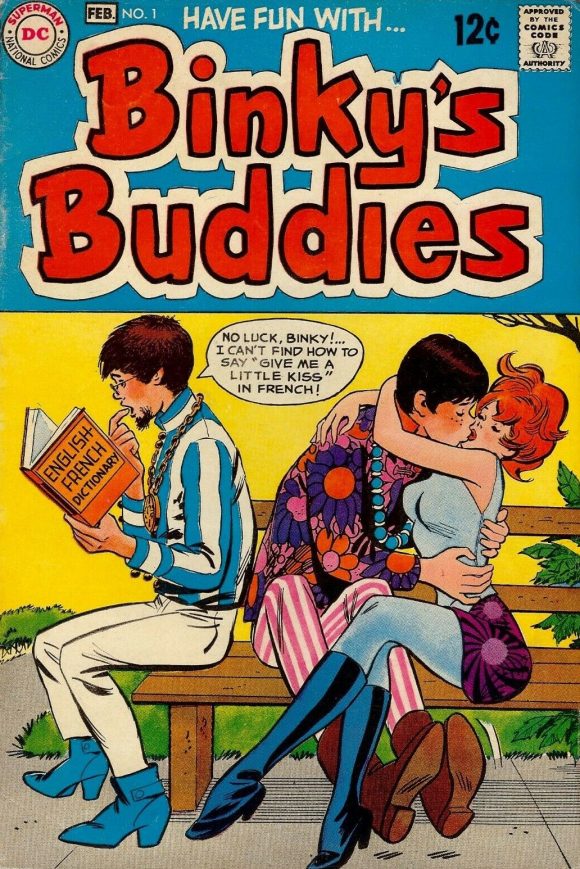 One reason he didn’t merit a page back then was one of our rules was not to make up too much information. It was one thing to give a character a first name, for example, but not a completely fabricated back story. Binky didn’t have much of a biography and I don’t think any of us had the time to wade through a decade of comics for a few tidbits to weave into an entry.

Dateline: Frontline. This was a just-under-the wire series conceived by Cary Burkett and ran in the short-lived late-’70s Men of War title. Set during World War II, the series followed journalist Wayne Clifford as he covered the European theater of war. I would have included it as an example of DC still stretching creatively during a turbulent period in its history. It is also one of many series illustrated by Jerry Grandenetti, who was rather busy on short works during this era, including the contemporaneous Paul Kupperberg-written Rosa, Master Spy. 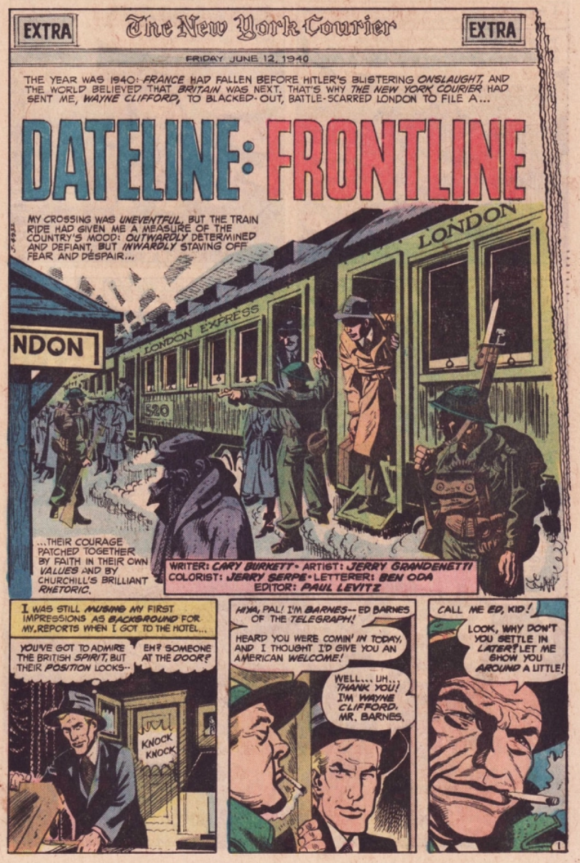 Debbi Anderson. Date with Debbi was created in 1969 as a female-centric companion title to Binky. Teen Debbi Anderson vied for romance and high school success, contending with her rival Desdimona De Wolfe. The series ran for just 18 issues, heavily inspired by the media tie-title A Date with Judy that DC ran from 1947-60. Henry Scarpelli won Best Inker (Humor Division) in the 1970 Shazam Awards, so someone was paying attention. 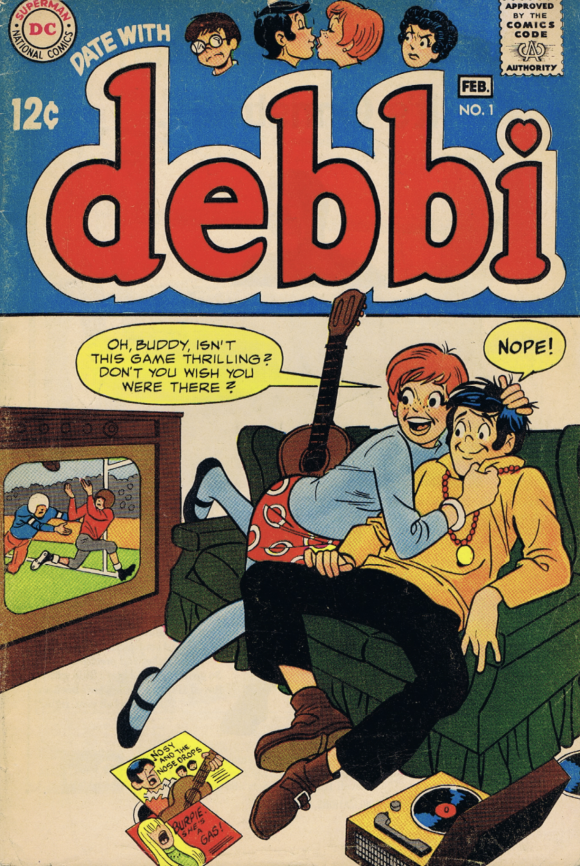 Genius Jones. We already had John Jones and Darwin Jones so there was no shortage of Joneses in our title. But, this Jones was created by budding science fiction author Alfred Bester and was drawn by Stan Kaye, who had started in the Joe Shuster Studio. Our hero, Johnny “Genius” Jones, debuted in Adventure Comics #77 (August 1942) and we found him stranded on an island with a mere 734 books. With nothing to do until he was rescued, he read these, memorizing their contents. When he spotted a ship, he burned the books to attract their attention and used his newfound knowledge as Answer Man (long before Bob Rozakis assumed the role), solving conundrums for a dime a case. He even had Mr. Oldster as his sidekick. 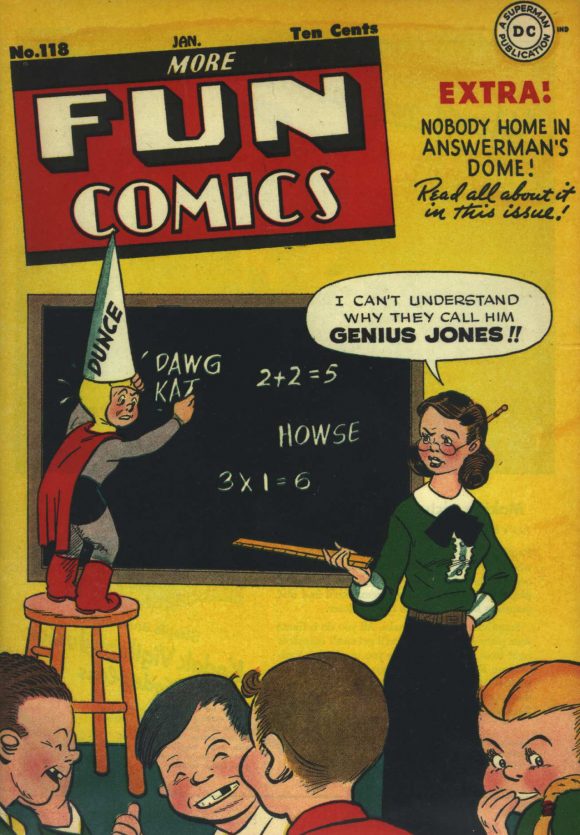 Jason’s Quest. This feature ran in Showcase #88-90 from writer/artist Mike Sekowsky. Jason Grant Jr. learned on his father’s deathbed that he was adopted and his birth father killed by a criminal. The byzantine plot was a pretext to put Jason on a motorcycle, searching across America, which was a popular theme of the time (see Easy Rider and TV’s Then Came Bronson). Jason made a cameo in Showcase #100 and even in Animal Man #25. While the series didn’t merit its own title at the time, when we were doing Who’s Who, Kurt Busiek was busily pitching a revival and this would have been a timely entry. 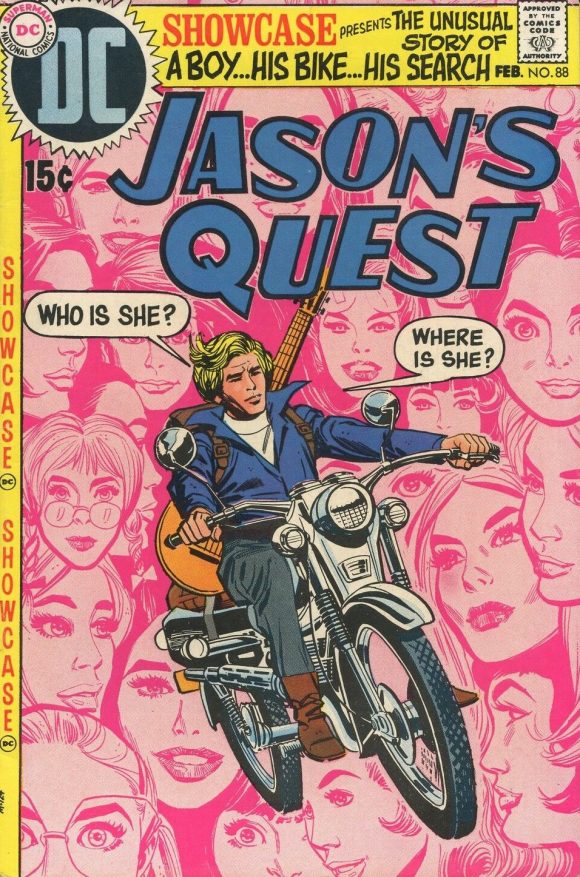 Manhunter 2070. Conveniently, the final three issues of Showcase (at the time) featured another Sekowsky creation: Starker, billed as Manhunter 2070. Once again, the father is killed but here, Starker is enslaved by space pirates until he grows up and usurps control, turning them in for the bounty. Now a bounty hunter, he and his robot Arky plied the space byways in search of prey. 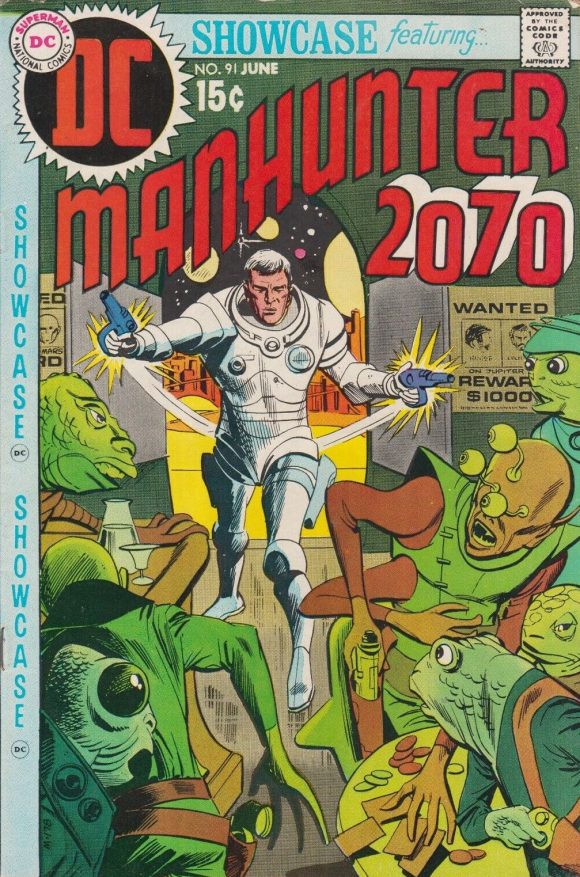 Set outside the DCU, we didn’t even include him in Crisis on Infinite Earths. Howard Chaykin, though, folded him into his Elseworlds series Twilight and Walt Simonson used him in his Judas Coin graphic novel.

Prez. Created and written by Joe Simon when he was briefly an editor at DC in the ’70s, the series posited a constitutional amendment that lowered the age a citizen could become president of the United States. Prez Rickard, a teenager, was elected to the Oval Office. It was a wacky attempt at catching the pop zeitgeist with Native Americans, corporate bad guys, Flower Power, and the summer of love. 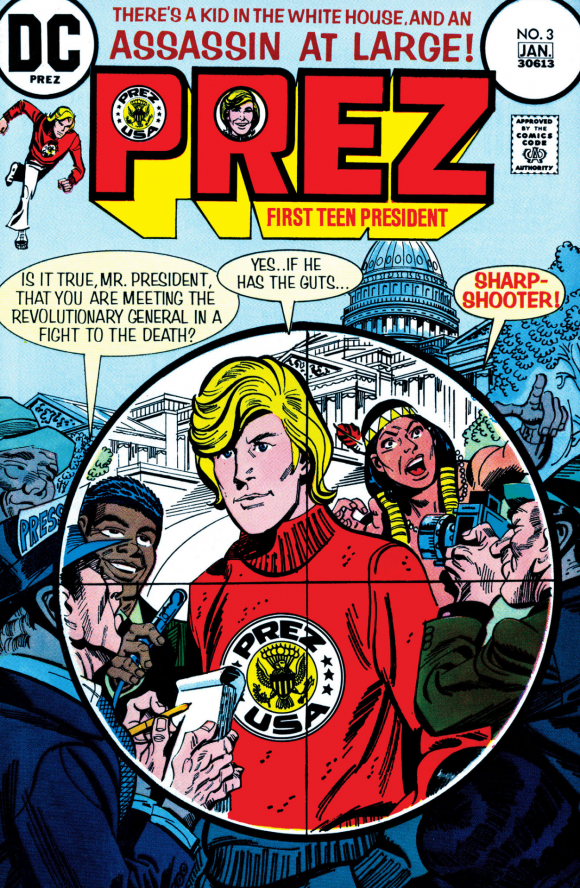 It proved out of step with the readership but left indelible memories resulting in his revival by Neil Gaiman and others ever since. There was even a reboot with a female lead.

Rodeo Rick. This was yet another seemingly generic Western feature, although it was co-created by artist Howard Post and an unnamed writer. The key here is that he arrived in 1948’s Western Comics #1, ahead of the conversion of other titles from super-heroes to Westerns. Over the course of his 69 appearances, through 1958, his exploits were illustrated by Ramon Fradon, Jimmy Thompson and Tom Cooke. Rick rode his horse Comet from adventure to adventure but as the Silver Age took hold, he briefly donned a costumed identity as the Masked Rider before riding off into the sunset. 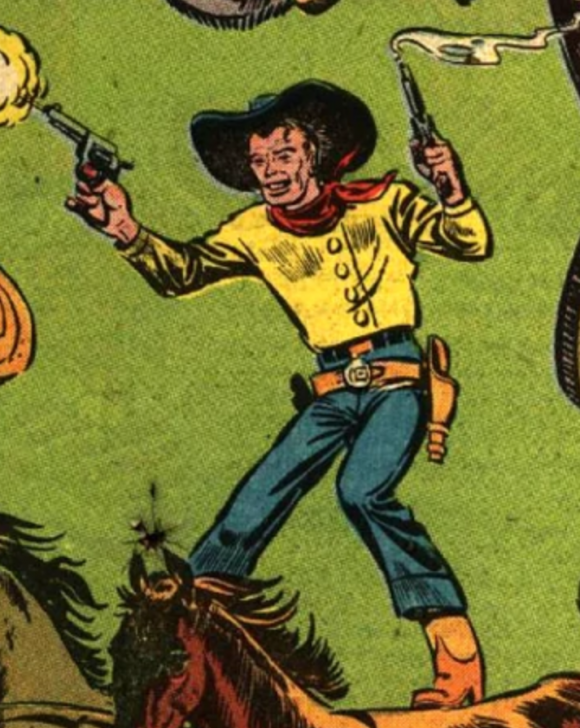 Scooter. Swing with Scooter was another teen-centric series, designed to capitalize on the renewed interest in Archie, crossed with the rock and roll craze. Created by editors Barbara Friedlander and Jack Miller, it was illustrated by Joe Orlando, arriving at DC before he became an editorial powerhouse. 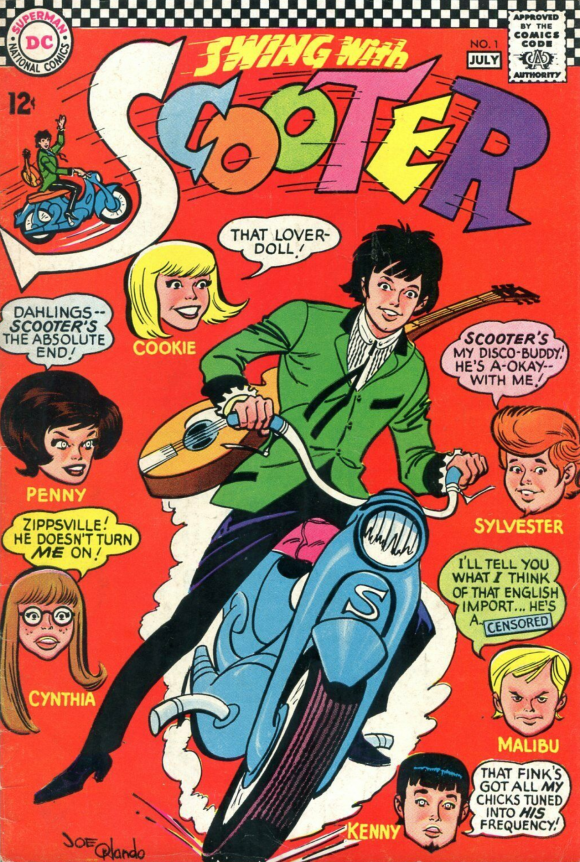 Scooter, nicknamed for the bike he rode, and his band the Banshees, were a major hit so they joined the British Invasion and relocated to Plainsville in the states. He performed and hung out with Cookie, Kenny, Malibu and Penny before confronting aliens and the Justice League of America.

Orlando ceded the art chores to Henry Scarpelli, shifting the look to a more generic Archie-style before the series ended after 36 issues.

Stanley and His Monster. A precursor to Calvin and Hobbes, six-year-old Stanley Dover found the pink-furred monster, which he named Spot, in a nearby sewer. He brought Spot home and the charming strip had everyone but Stanley unable to see the hidden beast. It was introduced as a backup in The Fox and the Crow in the mid ’60s until it took over the title, lasting from Issues #95-112. Created by Arnold Drake and Win Mortimer, the charming feature was memorable enough to be revived and revisited by others through the years. It’s well worth a reread. 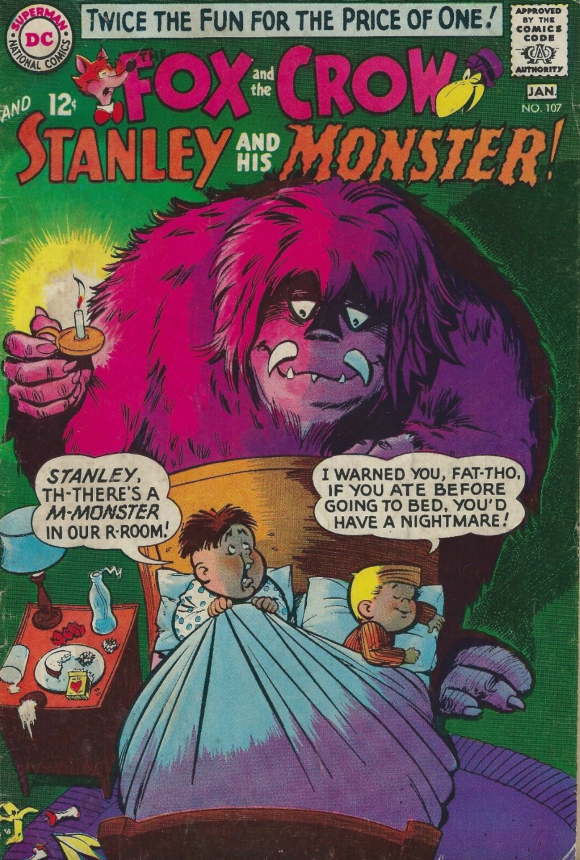 Sugar and Spike. Sheldon Mayer was a legendary figure as a writer, editor and artist dating back to comics’ earliest days. He first gained notice with his semi-autobiographical Scribbly feature, which also introduced readers to Ma Hunkel, the original Red Tornado (click here for more on her in Who’s Who). 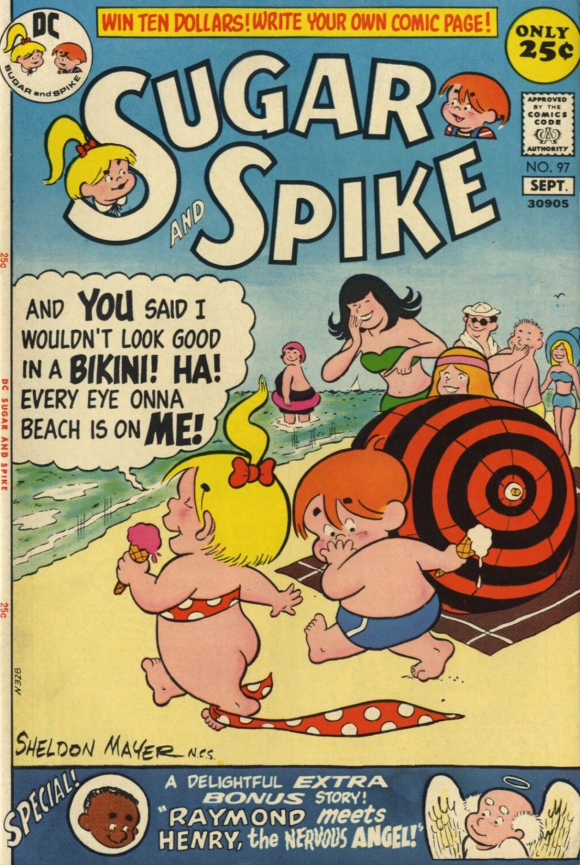 When he left editorial, he went on to write and draw numerous features (including a Scribbly backup in Stanley and His Monster), but his biggest claim to fame was his long-running series featuring the toddlers Sugar Plumm and Cecil “Spike” Wilson. These babies lived next door to one another and spoke “baby talk” that all infants comprehended but sounded like babble to adults. Among their friends was Bernie the Brain, a toddler who could understand the grown-ups (and cameoed in Crisis #9 so the feature counts!).

Mayer had to stop when his cataracts grew bad and the series was canceled with #98. However, he had successful surgery and resumed producing stories that mainly saw print overseas. Several were collected in a special 99th issue as part of the Silver Age Classics, released when DC ended its long-running printing relationship with World Color Press.

3 Girls — Their Lives — Their Loves. In the early 1960s, several of the company’s romance titles introduced recurring characters who appeared in serials to imitate daytime soap operas and perhaps juice the sales. The second-longest running feature was 3 Girls — Their Lives — Their Loves, which boasted 22 installments in Heart Throbs between 1966 and 1970. (The first was Secret Hearts’ “Reach for Happiness” with 29 installments drawn mostly by Gene Colan.) The three girls were Marian Tyler, Sandy Simms and Chris Mason, along with their friends and lovers. The best aspect of the run is the superb artwork of Jay Scott Pike and Russ Jones. 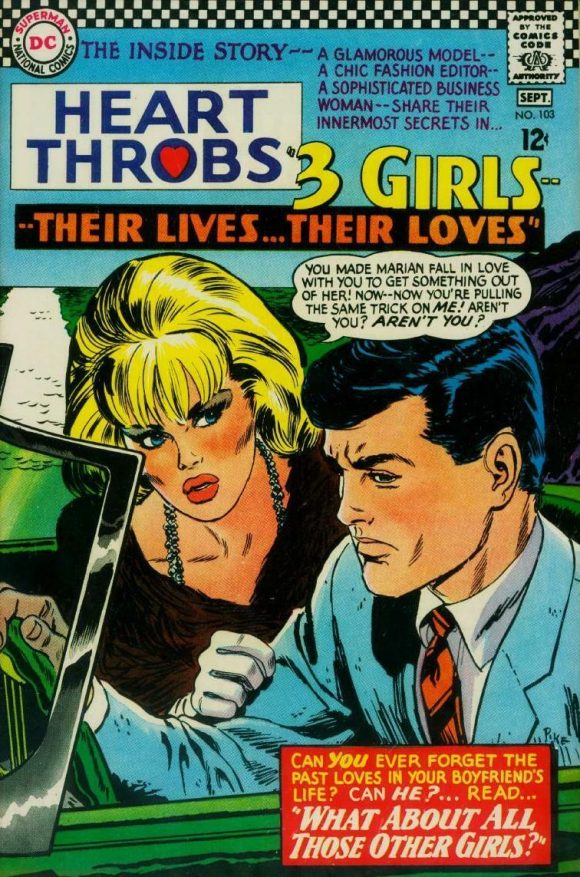