Why ROBIN Has Endured for 80 Years, by BOB ROZAKIS

Home » BATMAN'S HOT-LINE » Why ROBIN Has Endured for 80 Years, by BOB ROZAKIS

A year ago, Neal Adams launched our BATMAN WEEK anniversary celebration with a piece on WHY BATMAN HAS ENDURED FOR 80 YEARS. (Click here to check it out. It’s well worth your time.)

I invited Adams for the obvious reasons: Not only is he comics’ greatest artist, but he’s inextricably linked to the history of the Darknight Detective.

So in kicking off ROBIN WEEK, I wanted to do something similar and when I turned it over in my mind, I kept coming back to Bob Rozakis — my all-time favorite Robin writer, who chronicled the world of the Teen Wonder in Batman Family, Detective Comics and the second incarnation of Teen Titans in the heart of the Bronze Age. 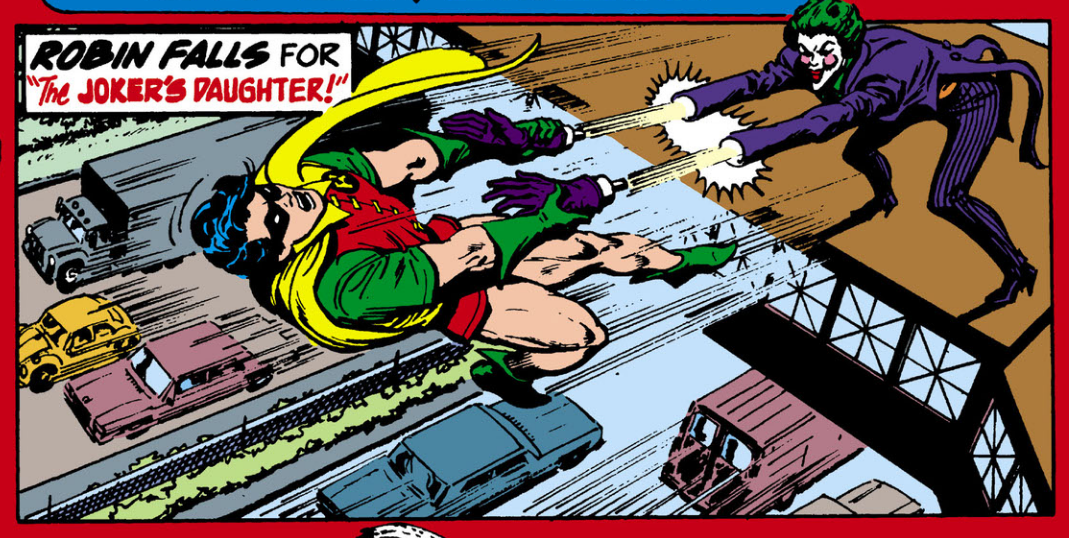 I loved those stories. Loved them.

I would sit in class in Highland Park Middle School and daydream that I was Dick Grayson at Hudson University. In my head, thanks to Rozakis and his artistic collaborators, I would be transported from the mundane world of pre-algebra to a universe of Batgirl team-ups and showdowns with the Joker’s Daughter. (No wonder I was never much of a math student.)

Anyway, all these years later, I asked Bob if he’d do the honors and inaugurate ROBIN WEEK — and he graciously agreed.

Here, then, is WHY ROBIN HAS ENDURED FOR 80 YEARS: 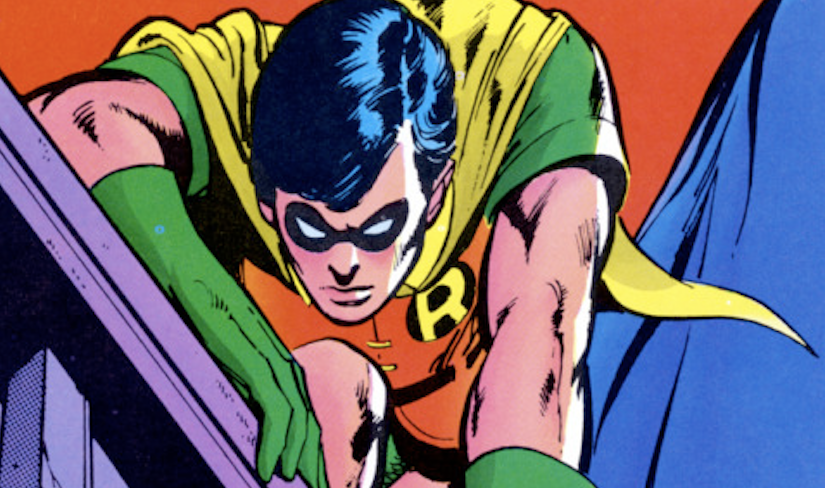 Adams. I still had to include him.

“The thing that bothered me was that Batman didn’t have anyone to talk to, and it got a little tiresome always having him thinking. That’s how Robin came to be.” — Bill Finger

That pretty much sums up the raison d’etre for Robin and every other sidekick who ever appeared in comics — the hero needs someone to talk to. Why a kid? So the young readers had someone to identify with: “I can’t be Batman, but I could be the Boy Wonder.” In addition, explaining everything to a young protege gave the writer a way to give the reader insights into how the hero was figuring out his plan of action.

What kid wouldn’t fantasize about being Batman’s partner? Riding in the Batmobile, fighting crooks, swinging between buildings on the batrope, having a secret identity — what fun! Well, except for those short-shorts. How did he not get frostbite in the winter? Or cuts and bruises? Or just plain dirty? Ah, it’s comic books; we don’t worry about such mundane problems. 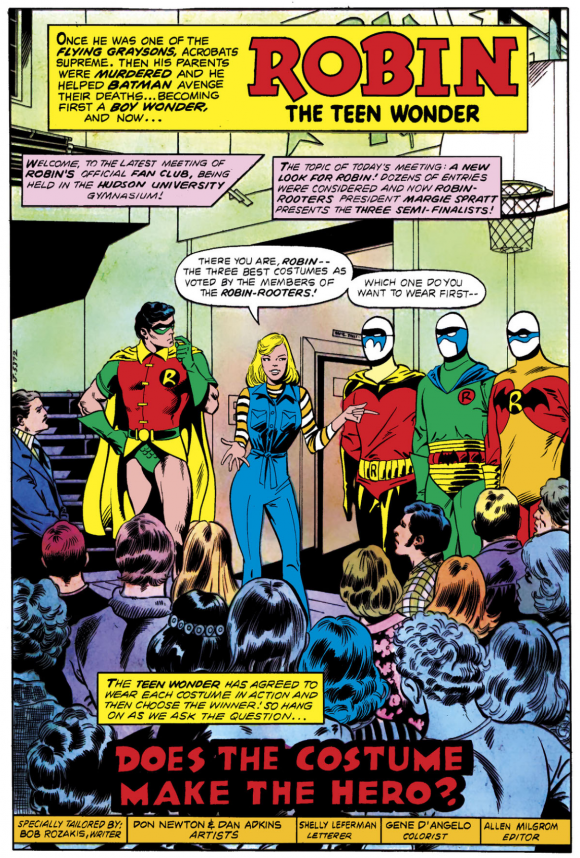 In the comics of the 1960s, Dick Grayson grew up pretty much when I did. In fact, we went off to college in the same year. (He was still there when I graduated and starting working at DC, so I was able to draw upon my own experiences for the scripts I was writing.) This was a major change for Batman as he started working alone again after 30 years, which worked fine for awhile, though he was left with only Alfred to talk to, usually after the fact. 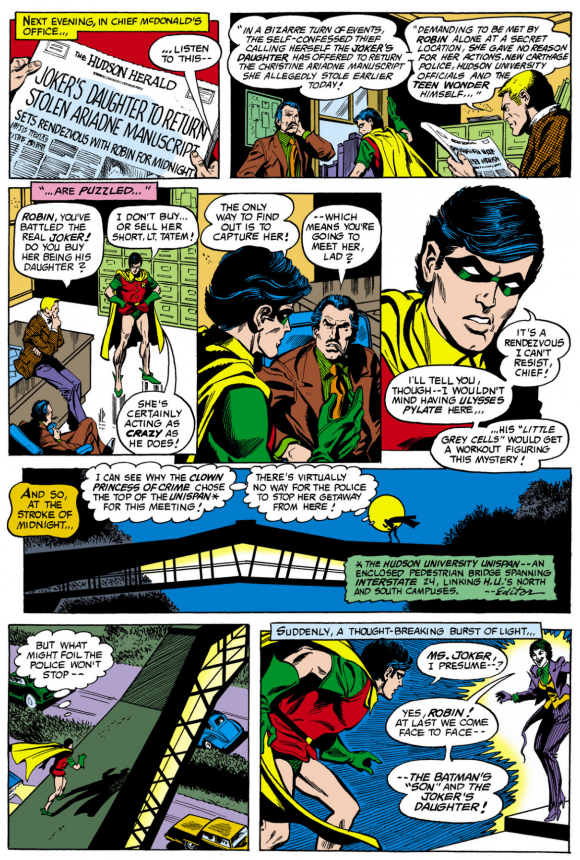 From 1976’s Batman Family #6 — the debut of the Joker’s Daughter, by Rozakis, Irv Novick and Frank McLaughlin.

As I mentioned, I used my time in college (at Hofstra University on Long island) as a basis for my Robin stories. In the first Joker’s Daughter story (Batman Family #6), I had Robin battling her atop the Hudson University Unispan, an enclosed pedestrian bridge modeled after the one at Hofstra. Some 40 years later, my alma mater immortalized the story (and me) as part of a span-long mural: 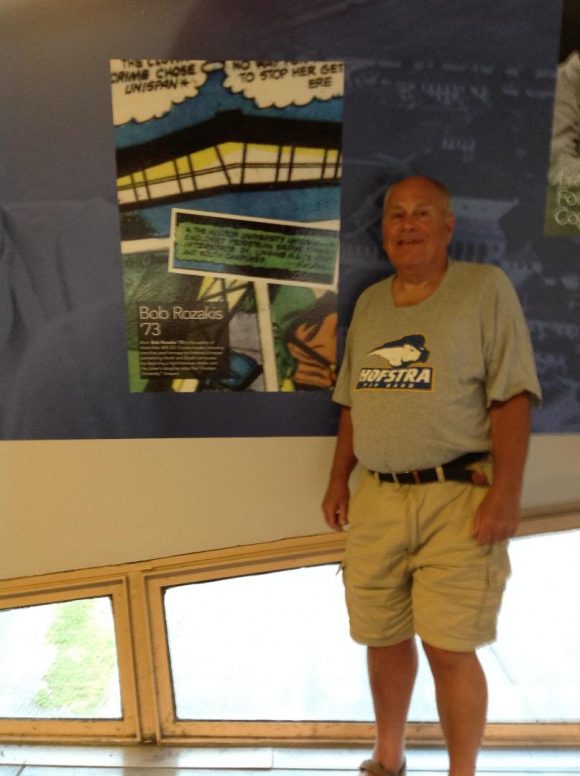 Finally, for a variety of reasons (and certainly not excluding the desires of licensees of the characters), the decision was made that Batman needed Robin. Or, at least, a Robin. Jason Todd, Tim Drake, Carrie Kelley, Stephanie Brown, Damian Wayne — all have taken on the role over the past four decades. Each provided a different spin on the role, but ultimately they served the same purpose: They gave Batman someone to talk to.

Bill Finger was right in 1940 and just as correct today.