Why ANT-MAN Is My Favorite Superhero – For Real 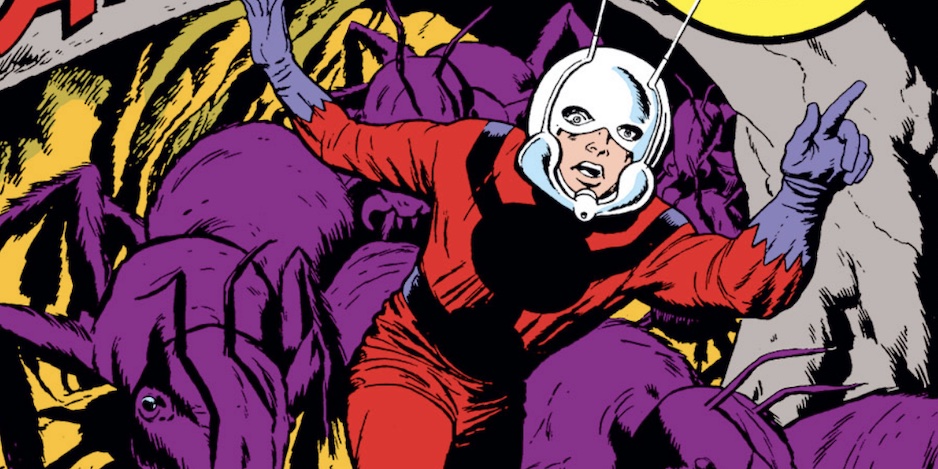 What a crazy day in Marvel history: On June 5, 1962, three comics were released that would have a spectacularly enduring impact on pop culture history: Amazing Fantasy #15, Journey Into Mystery #83 and Tales to Astonish #35, giving us Spider-Man, Thor and Ant-Man, respectively.

That’s according to Library of Congress copyright info — thank you Mike’s Amazing World of Comics — so I’m sure that given the vagaries of newsstand distribution, they actually hit stands at slightly different times. Nevertheless, it’s nothing short of extraordinary that these characters co-created by Stan Lee, Jack Kirby, Steve Ditko and Larry Lieber would all be birthed together. 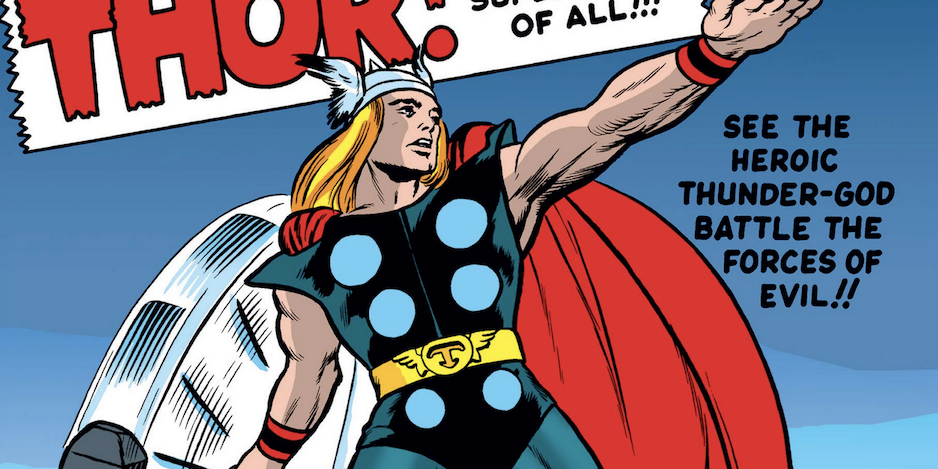 Naturally, each has fared differently in the decades since: Spider-Man has been a global comics phenomenon for decades while Thor and Ant-Man emerged into the general public consciousness thanks to the Marvel Cinematic Universe. 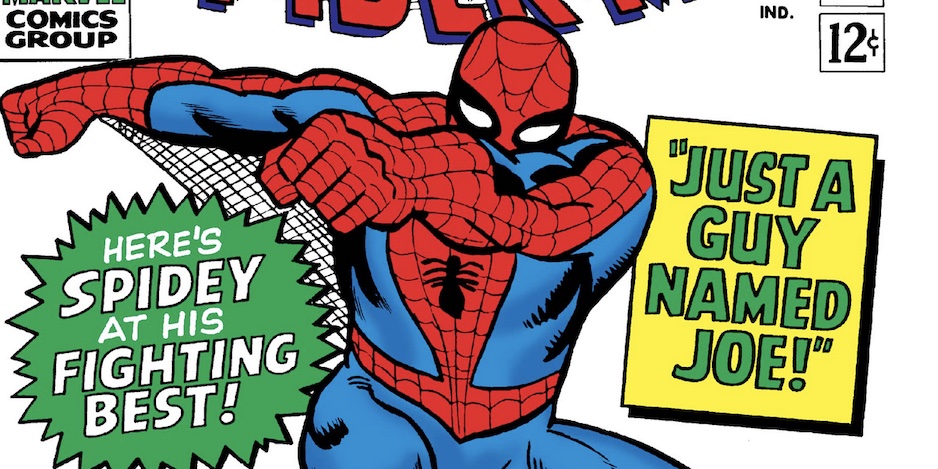 In any event, we’re having a three-pronged celebration: this piece by 13th Dimension contributor-at-large Scott Tipton, 13 COVERS: A THOR 60TH ANNIVERSARY SALUTE and THE TOP 13 STEVE DITKO SPIDER-MAN COVERS — RANKED.

So sit back and enjoy this celebration of the profound creativity of the House of Ideas.

In my many careers in and around the comic-book business, one question tends to come up more than most:

It’s a question I usually dread, because it requires a lot of explaining, but here we go. It’s Ant-Man, all right? Ant-Man. Or sometimes it’s Giant-Man. Or Goliath. Or occasionally Yellowjacket. Doesn’t matter, though, because they’re all the same guy: Dr. Henry Pym, the Incredible Shrinking (and Growing) Man of Marvel Comics.

Having gone through a number of superhero names and more costumes than the touring company of Cats, Hank Pym is nonetheless my favorite superhero character, bar none. Why? He’s just so messed up, but he keeps coming back. He’s got arguably the lamest power in comics, he’s so riddled with insecurity and low self-esteem that he makes huge mistake after huge mistake in order to prove himself, and yet he never gives up. 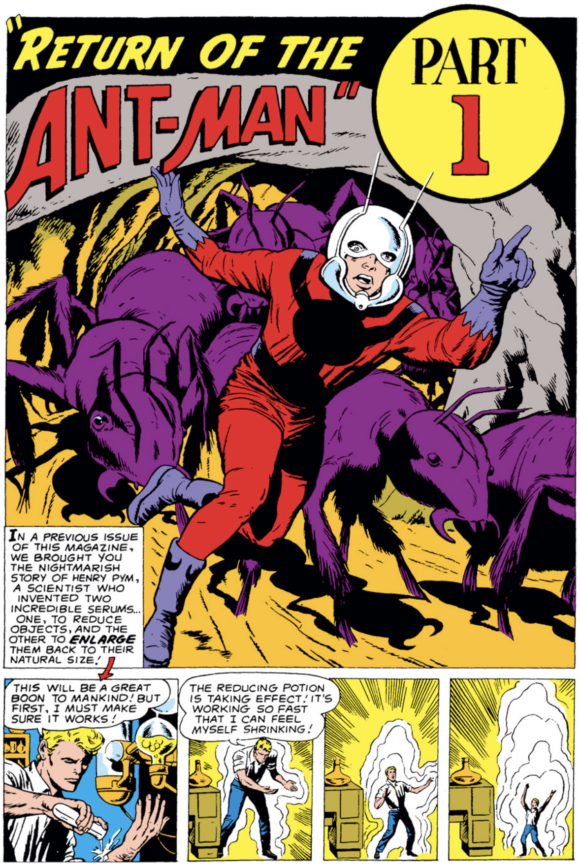 If I were a superhero, as much as I’d want to be cool like Spidey or Iron Man, I’m sure I’d wind up being Hank Pym. So come with me now as we take a look at the birth of the Marvel Universe’s resident also-ran, Hank Pym, on this, his 60th anniversary.

Of course, Ant-Man doesn’t seem like an also-ran these days, with two movies under his belt and a third on the way, not to mention pivotal roles in Civil War and Avengers: Endgame, two of the biggest and best superhero films ever made. But you may be surprised to learn that the debut of Ant-Man as a concept was more of an afterthought, a sequel to an earlier comic-book tale intended as little more than a one-off.

Hank Pym first appeared in Tales to Astonish #27 (released in September 1961) in “The Man in the Ant Hill!” — one of the countless sci-fi/horror stories Stan Lee and Jack Kirby were churning out just before the Marvel Universe really got rolling. 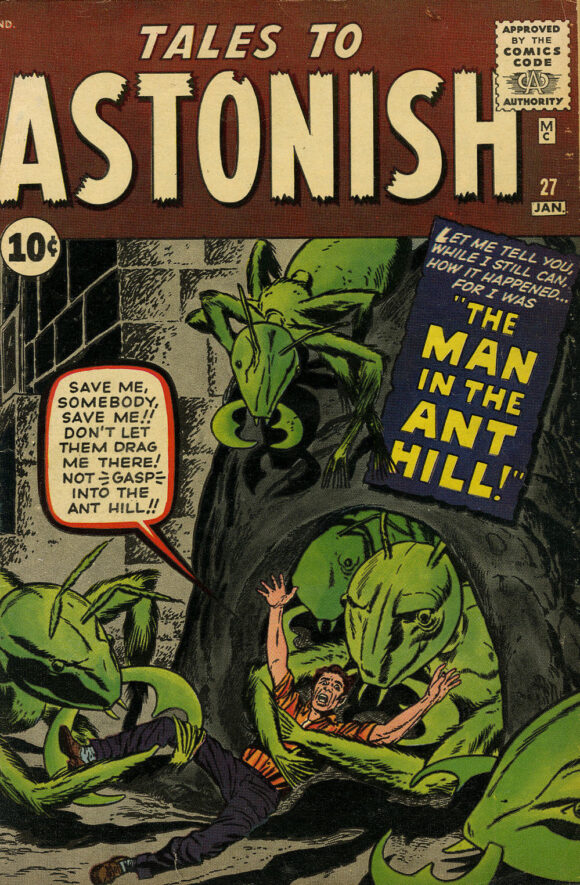 In the story, readers are introduced to Dr. Henry Pym, a scientist who refuses to devote himself to practical projects, only working on research that appeals to his imagination, such as, for example, potions that can decrease or increase the size of physical objects.

Having successfully shrunk and restored a lovely parlor chair, Pym logically decides the next step is animal testing, and rather than going out to the pet shop to buy some nice disposable white mice or guinea pigs, Pym jumps right to human subjects, and swiftly doses himself with the reducing potion.

The scientist is swiftly shrinking uncontrollably, and winds up at the approximate size of an ant, running to an anthill for shelter. Inside the anthill, Pym fends off the stampede of ants with a matchstick, a makeshift lasso, and even a little judo. 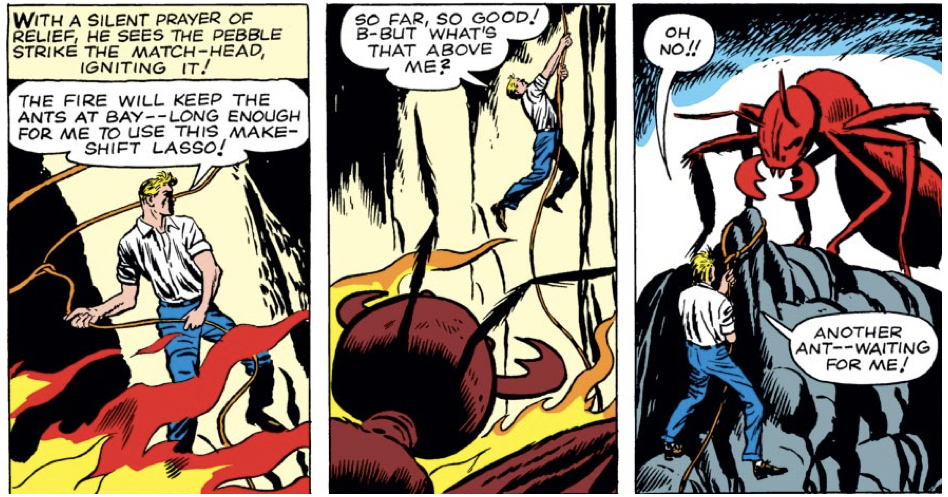 Thanks to a single friendly ant, Pym makes it back to the safety of his lab, where he dives into the test-tube containing the growth serum, restoring him to his proper size. Pym destroys the serums, and swears off his size-changing research.

However, when the sales numbers came back to Marvel editor Stan Lee, he noted that Tales to Astonish #27 was the best-selling comic for that month. Stan, Jack and scripter Larry Lieber (who had also scripted the first Hank Pym appearance) set to work converting the concept into an ongoing superhero character, and in June 1962, Tales to Astonish #35 hit newsstands, featuring “Return of the Ant-Man.” 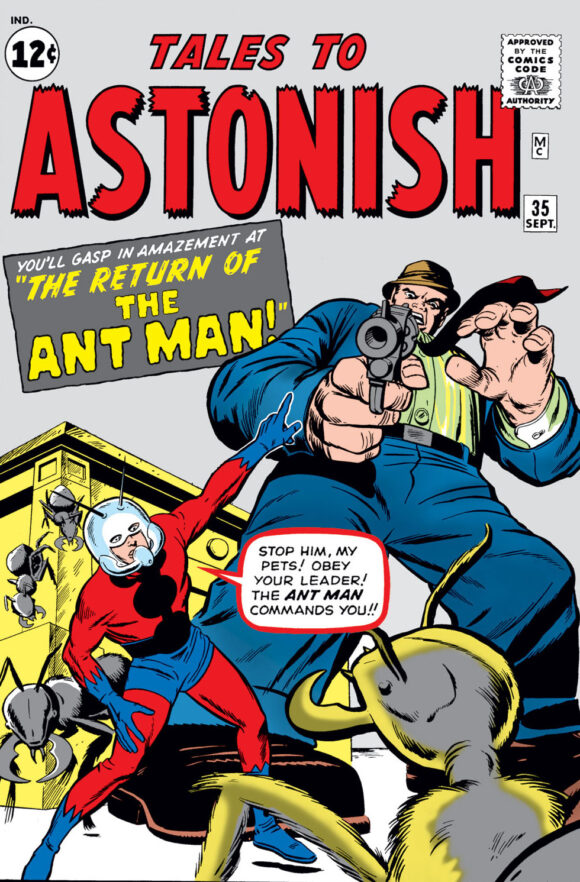 In his return appearance, it was revealed that Hank Pym had re-created his shrinking and growth serums and locked them away for safekeeping. Also, as a result of his experience in the anthill, Pym had become obsessed with ants, and had soon invented a helmet which would allow him to communicate with them, as well as devising a uniform to protect him from accidental ant bites. 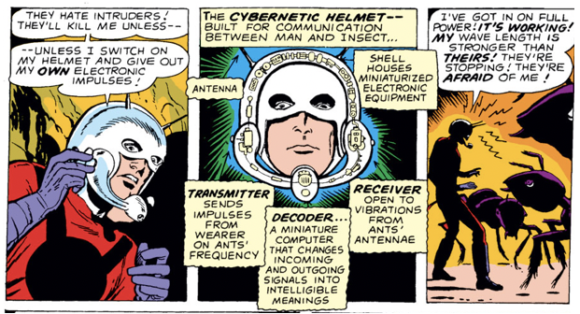 Before he could test the equipment, Pym is commissioned by the government to create a gas that could immunize the human body from radioactivity. Naturally, word of this leaks to Those Dirty Commies, who quickly dispatch a quartet of “goonskis” to steal the formula from Pym.

Pym, locked away while the Russians ransack his lab and interrogate his assistants, dons his helmet for the first time, shrinks down and heads for the anthill, where he discovers that not only does the helmet work, allowing him to communicate with his new insect allies, but he also retains his full human strength even at ant-size. With the help of his new ant buddies, Ant-Man frees his assistants and captures the Reds, keeping the anti-radiation gas out of Communist hands. 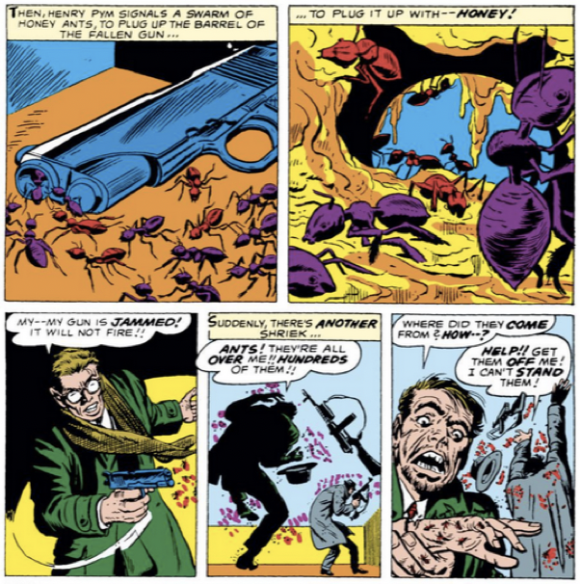 And with that, Ant-Man was off and running. Ant-Man never reached the same level of popularity as the other newly appearing Marvel characters like Thor and Spider-Man, and stayed a second-stringer throughout the Silver Age, eventually losing his solo spot in Tales to Astonish and remaining strictly in the pages of The Avengers.

Stan Lee never gave up on him, though, first introducing the Wasp as his crime-fighting partner, then giving him amazing growth powers as Giant-Man and later Goliath, with a parade of new costumes along the way, all in the hopes of finally getting the character up to the big leagues.

Sixty years later, everybody in the world knows who Ant-Man is, eagerly awaiting his next adventure on the silver screen. Not too shabby for an afterthought.

SCOTT TIPTON is a historian and comics writer, best known for his work on IDW’s Star Trek comics. Here he is with a masked friend. 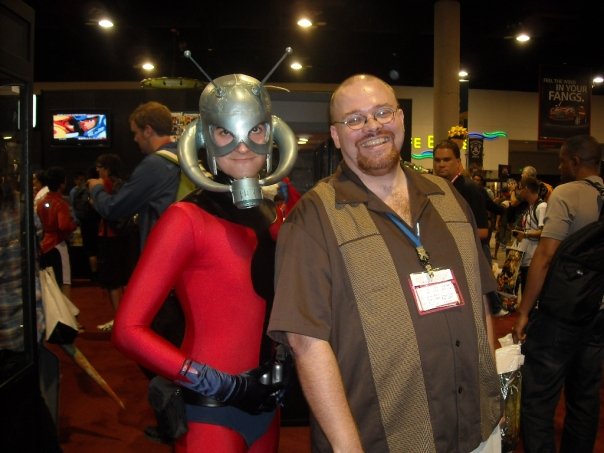