WHEN ROBIN LEFT: A Personal Look at a BATMAN Landmark

Home » BATMAN'S HOT-LINE » WHEN ROBIN LEFT: A Personal Look at a BATMAN Landmark

I’ve been thinking about time a lot lately and the reason is painfully simple: My son, Sam, moved out this week for college.

Never before have I been caught between such overpowering and conflicting crosscurrents of pride and pain.

Of course, whenever I feel I might drown, I ask my wife, Wendy, for a hug and a kiss. And then, often, I reach for a comic book.

For the last few weeks, the one I’ve been thinking about over and over is Batman #217. If the issue number doesn’t jump out at you, it’s the one from 1969 where Dick Grayson, after 29 years of adolescence, leaves Wayne Manor for Hudson University. 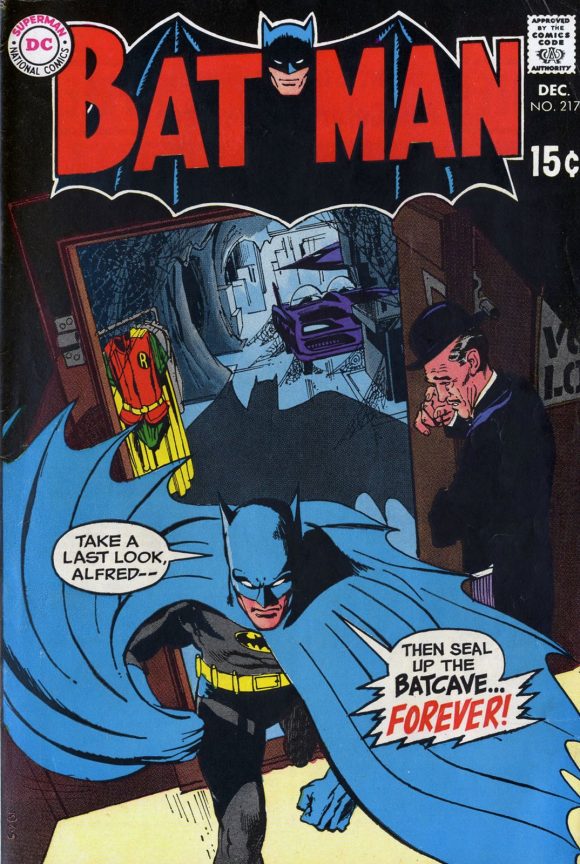 The Dick-leaving-Bruce trope has been reformulated many times over the intervening decades, with creators trying to introduce contrived motivations for their split. But Batman #217, written by Frank Robbins, with art by Irv Novick and Dick Giordano, posits the most elegantly realistic reason of all: Robin has grown up and it’s time for him to go. Not for good maybe, but for all intents and purposes, he’s leaving the nest.

The story — One Bullet Too Many! — is very much of its time. It only devotes three pages to Dick’s departure and there was just oblique lead-up to it in the preceding issues of Batman and Detective Comics. Even Neal Adams’ compelling cover makes no specific mention of it, instead giving us a scene that in modern parlance would be called clickbait: Batman angrily storms out of the Batcave, Robin’s brightly colored costume hanging forlornly behind him, as he commands a tearful Alfred to seal it up “FOREVER!”

Of course, Dick’s actual move is straightforward and quite gentle. As the story opens, Bruce wanders into in his ward’s room, looks around and muses on what’s happening. He even notices a stray sneaker lying under the bed and notes the sloppy kid’s “same messy habits — even to the end,” universal shorthand for bemused parenthood. (I’ve noted the same many times over, with that panel floating in my head when daring to venture into Sam’s room.) 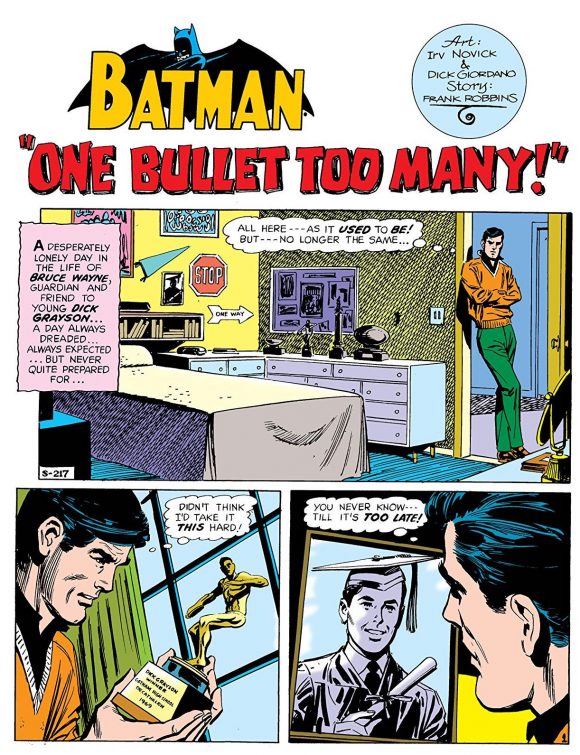 Bruce heads downstairs with Alfred, where we find Dick, who is already decked out in his college sweater, bags packed, cheerfully ready for his next adventure. The three say their good-byes, Dick urging everyone to keep their chins up. Finally, in a cab alone, he allows himself to shed a tear. 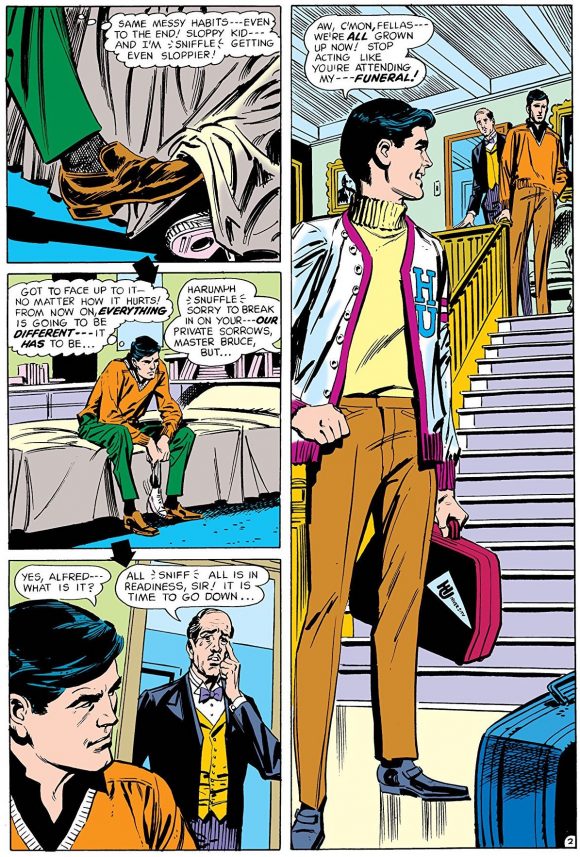 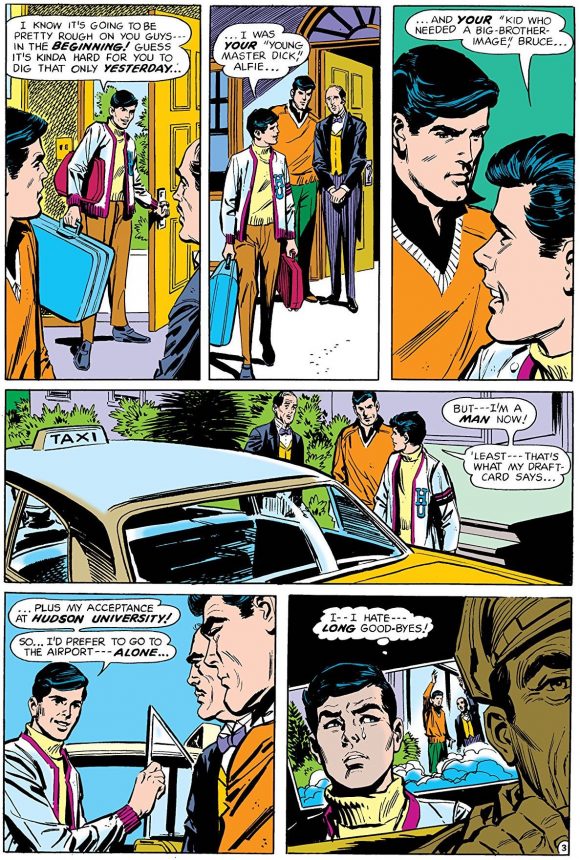 Now an empty-nester, Bruce tells Alfred it’s time for them to leave the Manor too and move into a penthouse bachelor pad, stripping away most of the trappings that had long been associated with Batman.

The rest of the issue segues into the kind of noirish potboiler that would become a Batman standard over the next several years. For much of the early ‘70s, the Darknight Detective battled gangsters, tussled with supernatural adversaries and tackled murder mysteries as if he were a muscled Miss Marple in cape and cowl.

Were this story told from scratch today, we would have gotten six issues of angst, hurt feelings and misunderstandings, plus three yelling matches and at least one punch thrown between them. Oh, and four weekly tie-in issues showing Dick visiting campus, applying for student housing, shopping for books and packing his socks and underwear.

But even though Dick’s leaving was handled in such pithy fashion, the impact of Batman #217 loomed large over the rest of the 1970s. Nearly 50 years and a succession of revisions later, it reads more like an artifact. Yet it was such a big deal then — so much so that the story was included in the seminal Batman From the ‘30s to the ‘70s hardcover that was published only a couple of years after the issue came out. (This is where I actually first found the story.) 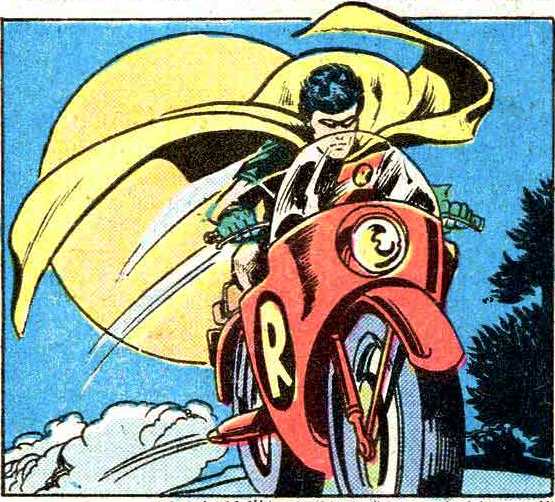 Batman now had his adventures in Gotham and Robin had his in New Carthage. As a young reader, I toggled between both, wanting to be Bruce but identifying with Dick. Bruce never had class or worried about homework or exams, y’know? Besides, the only thing that comes close to being Batman is hanging out with him, even if just for summer vacations and holidays. The Caped Crusader in the ‘70s was confident and comfortable in his own skin, a cool customer.

Eventually, in the early ’80s, DC engineered the first real rancorous division between the Dynamic Duo, but again, the reason was fairly mundane: Dick wanted to quit college and be a superhero full time. Bruce was against it. Classic parent-child conflict, only with lots of spandex.

Robin stood his ground and ultimately became Nightwing in 1984. I was 17 years old — the perfect time to read stories about a young man determined to live life on his own terms, even if — no, especially if — it meant adopting a whole new identity. Now I related to Dick Grayson in an even more powerful way.

And then something happened. Twelve years passed and I married Wendy, my best friend. Another two years went by and we had a baby. And then Sam went from baby to boy, and from boy to kid, a laughing young daredevil if you will.

Since he was old enough to hold up his end of a conversation, he’s been my sidekick. We don’t patrol rooftops and my version of the Batmobile is a 13-year-old black Toyota that doesn’t even have power locks. Yet we’ve had adventures every day, whether they’ve been cracking each other up in the supermarket, seeing our favorite movies together, squabbling over schoolwork and bedtimes, lovingly heckling old cartoons and commercials on TV, or spending long days walking all over the city. We’ve traveled to other countries and even hit places like San Diego Comic-Con, me in my Batman t-shirt and he in his Robin t-shirt. 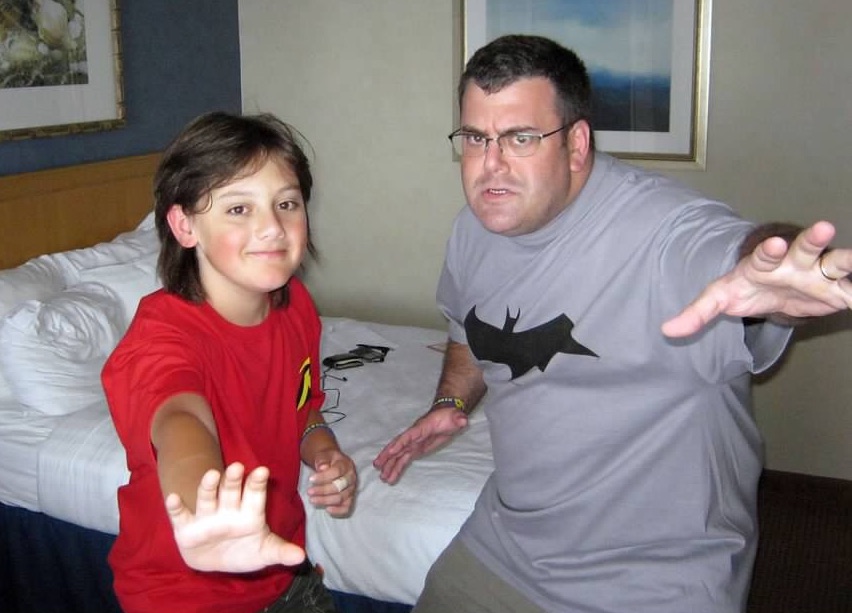 Throughout, Wendy’s made our Dynamic Duo a Terrific Trio, sometimes as an enthusiastic co-conspirator or, when Sam and I really start getting juvenile, a remarkably patient and vaguely amused chaperone.

A couple of years ago, though, Sam started making noise that he wasn’t really Robin to my Batman anymore.

I’d have none of it.

“You’re not out on your own yet. You live here, you’re still Robin,” I’d counter. “I’ll tell you when you’re Nightwing.”

Only deciding to become Nightwing really isn’t the father’s choice, is it? The whole point is it’s the son recognizing that he’s his own person and not just part of someone else’s story. 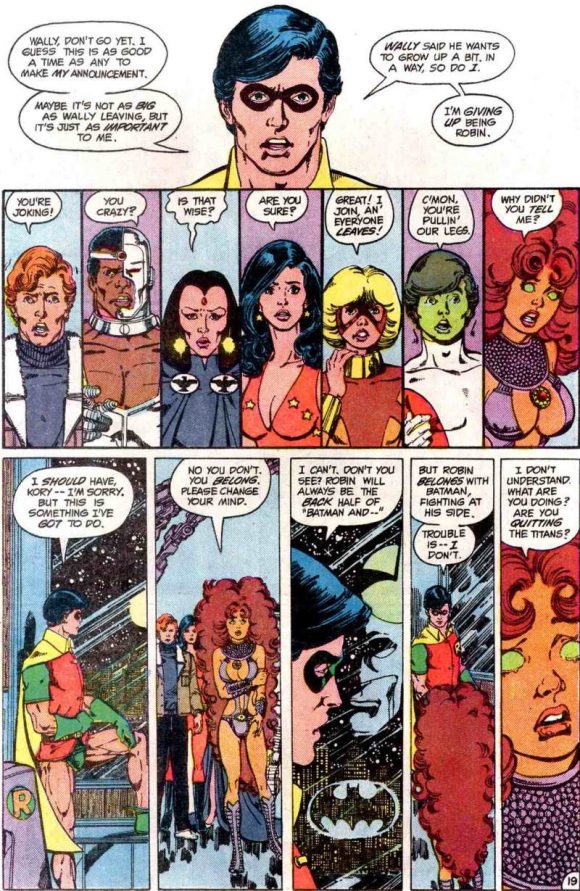 So now, as he figures out who and what he wants to be, on a campus with thousands of others just like him, seeking their new directions, Sam really isn’t Robin anymore.

And yeah, it’s killing me inside. He’s no longer my sidekick. He’s not my Boy Wonder. Hell, in a few months, he won’t even be a Teen Wonder.

He’s a man. Young, but a man nonetheless.

And you know what? Now he’s something better. He’s my best friend.

How many people get one of those, let alone two?

I suppose the only thing left to say is: Nice shirt there, kid. 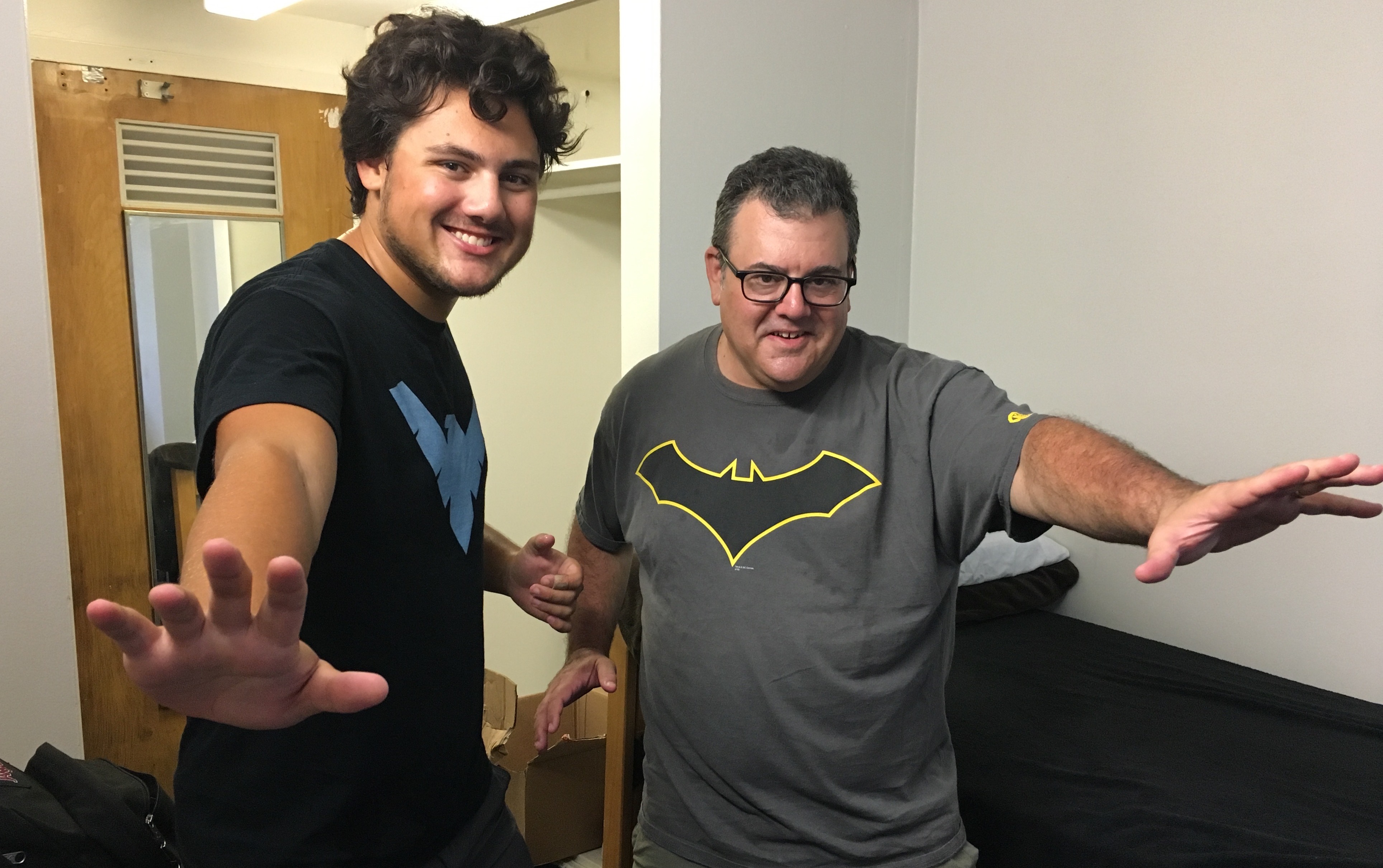