A look at the three published so far…

13th Dimension columnist Rob Kelly is the world’s preeminent expert on what he calls comics’ greatest format — the treasury edition. Just check out his TreasuryComics.com. And if that’s not enough, check out his TreasuryCast podcast, devoted to the form. (Hell, you even get to hear me pop in from time to time. How lucky you are!)

Last year, Marvel began rolling out a new wave of treasuries and now we’ve gotten three of them — including the new Guardians of the Galaxy issue. So I asked Rob to give them a gander and see if they measured up to the beloved editions of the Bronze Age. I didn’t have to twist his arm… 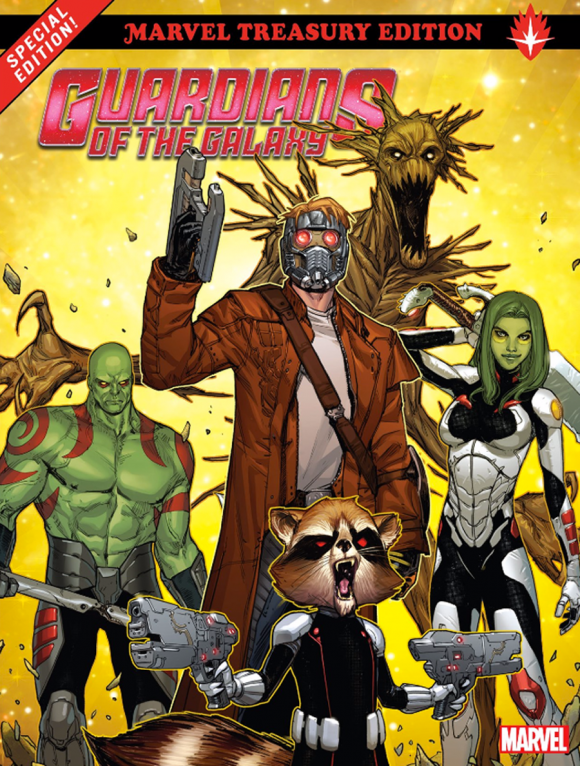 In 2016, more than 30 years since they abandoned them, Marvel Comics returned to the classic “treasury comic” format with Spidey #1. As a devoted fan of the classic oversized comics, I was thrilled, hoping there would be more to come. Thankfully, 2017 has proved that Marvel is back in the treasury business, with the January release of Marvel Treasury Edition: Heroes of Power: The Women of Marvel, and this week’s Marvel Treasury Edition: Guardians of the Galaxy!

Guardians of the Galaxy reprints 2013’s Guardians of the Galaxy #s 0.1 and #1, 2008’s Guardians of the Galaxy #1, and 2014’s Rocket Raccoon #1. Growing up, part of the appeal these treasuries had for me were that they offered broad, history-spanning introductions to various Marvel characters (Spider-Man, Thor, The Fantastic Four, etc.). By their size and price point, these books have a certain “gift-y” feel to them, like they’re designed to be read by average people other than die-hard fans who already know all the secret handshakes. The stories chosen for this collection are ideal for that purpose, featuring all the heroes we saw in the 2014 movie, plus characters scheduled to appear in the sequel (Mantis, Star Lord’s Dad, etc.). 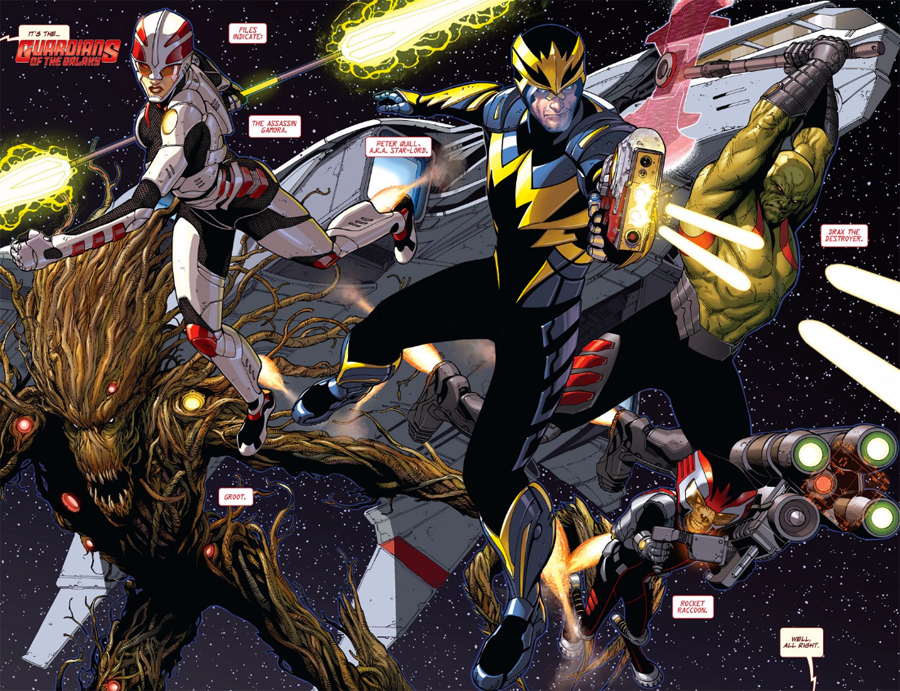 While the three Guardians stories do feature some heavier moments, that’s balanced by the charmingly goofy Rocket Raccoon solo adventure, written and drawn with Warner Bros. cartoon-esque elasticity by Skottie Young. For kids who fell in love with the Guardians thanks to the movie, this book is perfectly timed, since Guardians of the Galaxy Vol. 2 is only a month away!

January 2017’s Heroes of Power: The Women of Marvel is inherently a more diverse collection, since it features stories starring Captain Marvel, Ms. Marvel, the Wasp, Gwenpool, and Spider-Gwen, culled from their various solo comics. Like GOTG, Heroes of Power is generally an all-ages affair, except for the inclusion of the more violent and profane Gwenpool. While not even close to the “adult” antics of her predecessor, Deadpool, I could see some parents thumbing through this book and not wanting to subject their little superheroes and -heroines to this particular character.

That concern aside, thanks to the Wasp installment, we get to see the work of Alan Davis in a treasury, and if there’s any comic book artist whose work cries out to be seen in a larger format, it’s Davis. 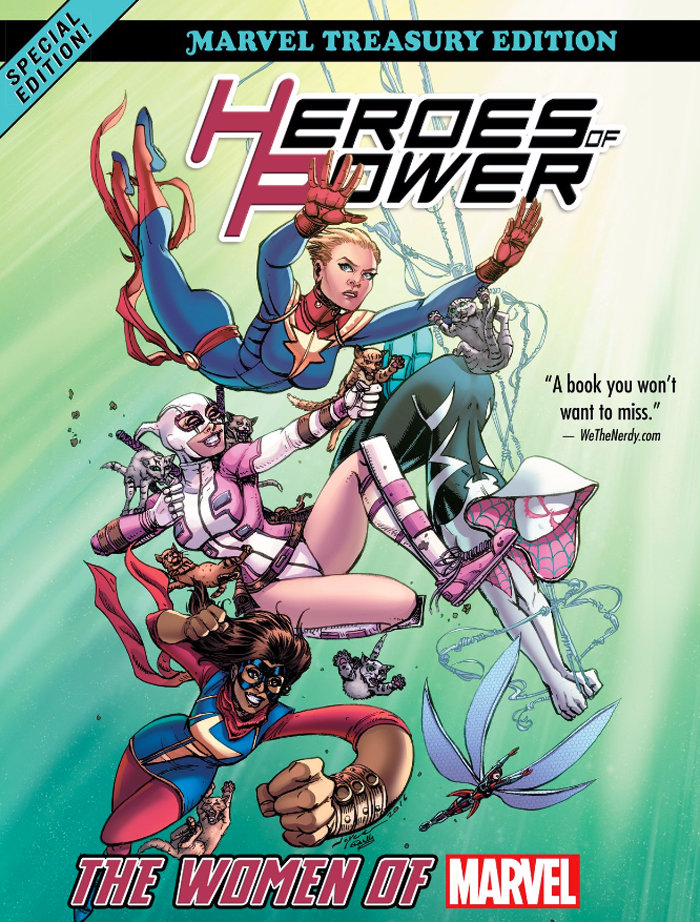 2016’s Spidey #1 is about as broad appeal a release as you can get, featuring Marvel’s marquee character in a series of stories reprinted from the Spidey series by Robbie Thompson and Nick Bradshaw and Spider-Man series by Brian Michael Bendis and Sara Pichelli. While not originally conceived for the larger format, Bradshaw’s work is beautiful to gawk at in widescreen. Spidey’s gravity-defying powers have him springing across various double-page spreads and the whole package is a total pleasure. 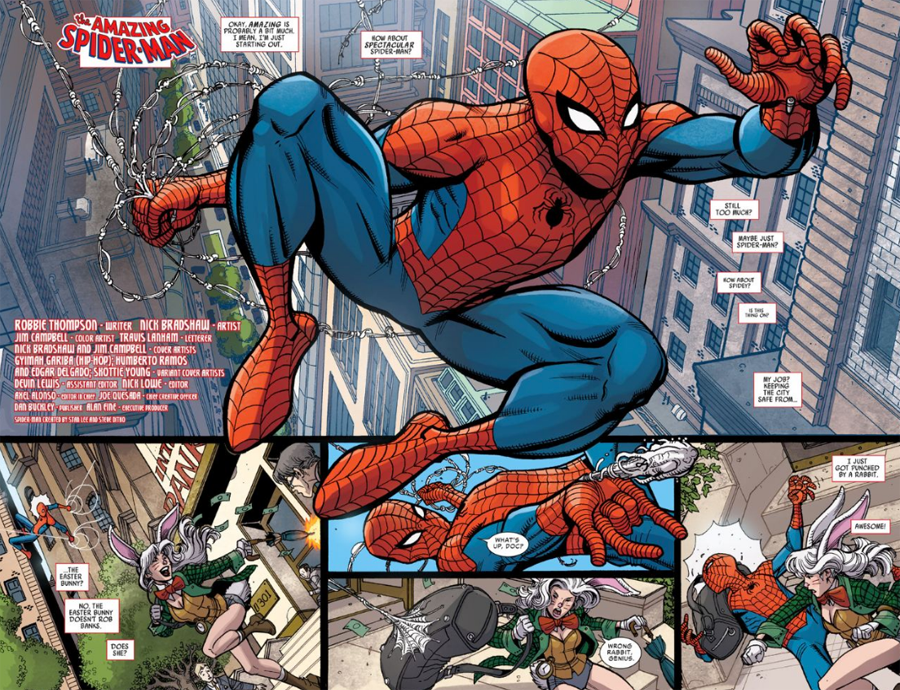 They released this book at the beginning of summer last year, which feels like a nod to when they released their very first very Marvel Treasury Edition in 1974, starring—you guessed it—Spider-Man. 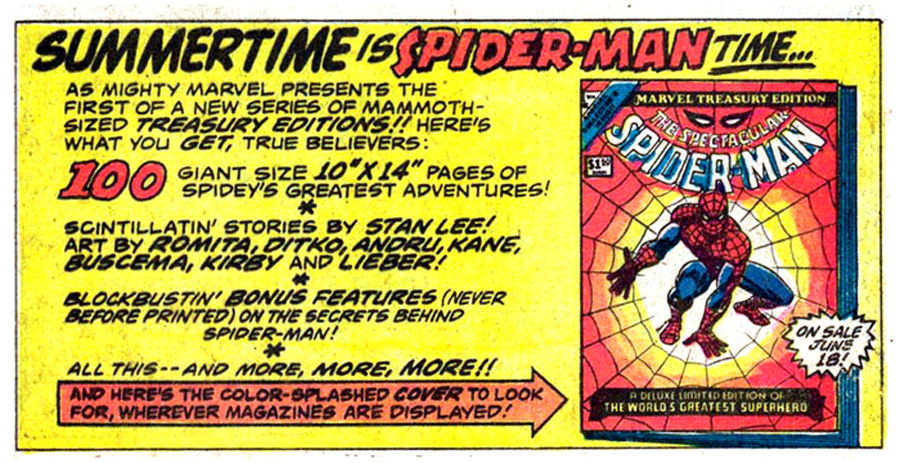 On my TreasuryCast podcast, I have told anyone who would listen that Marvel should be taking greater advantage of their ongoing blockbuster movie slate by putting together more of these themed treasury collections and releasing them in conjunction with the films. They seem to be starting to do that with Guardians of the Galaxy, but what about similar treasuries for Spider-Man: Homecoming and Thor: Ragnarok?

We learned recently that Marvel is getting back into the digest comics business with plans to distribute them in places other than comic shops, and they should do the same for the treasuries. The only minor hiccup is these books’ price — $15.99. While Marvel is certainly delivering a handsome, quality product, that’s a bit high for most parents to drop on a whim. Perhaps downgrading the paper stock or cutting a few pages, just to shave a buck or two off the price?

The only other concern I have with these treasuries is that they tend to feature chapters of longer stories. Of course, virtually all DC and Marvel’s monthly output are continued stories, so it’s probably hard to find single-issue comics that are all-ages appropriate and feature all the characters that would fit a collection like a treasury. Still, it would be nice to have these treasury collections deliver a beginning, middle, and end, and not feel like you’re only getting half (or a third, or a quarter) of the story. 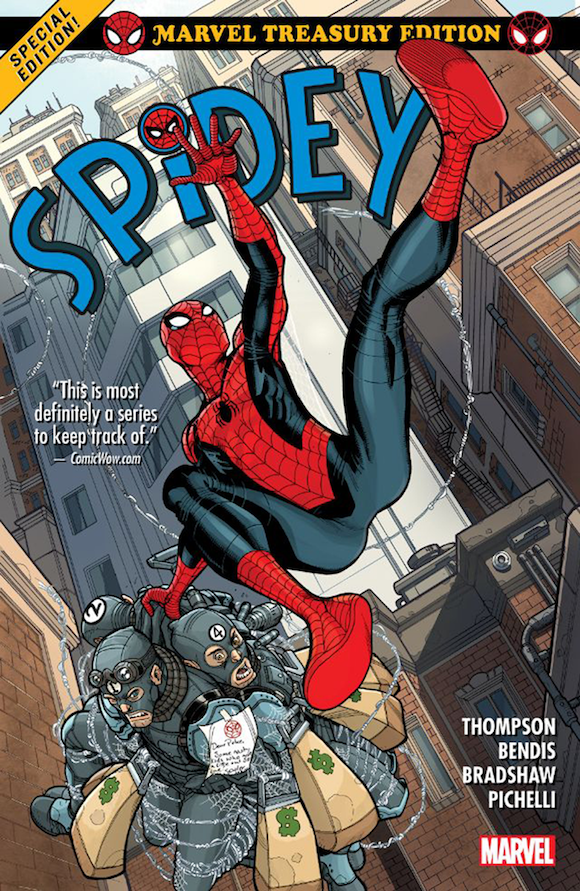 Also—and this is more just my personal preference—I think it’d be cool if Marvel could devote just one story per book to a “classic” version of the characters. It’d be a treat for all the new Guardians fans to see what the team looked like when it began, or a glimpse at their groovy 1970s adventures. And who wouldn’t have wanted some John Romita Spider-Man in the back of Spidey #1, or a classic Ms. Marvel adventure in Heroes of Power? Marvel has half a century’s worth of amazing material sitting in its vaults, let’s see it!

Still, those are relatively minor concerns. I think so far Marvel’s new Treasury Editions are great books and I hope that we see a lot more of them in the future. The treasury editions were instrumental in turning me into the obsessive comics nerd that I am today, and Marvel has an extraordinary series of opportunities to let Hollywood help them sell a lot more comics.

Treasuries are the closest the comic-book medium can get to the all-encompassing grandeur of the silver screen, so I say Marvel, bring on the treasuries!

This goes for you too, DC!