Seth is a photographer and a writer, probably best known for “Leaping Tall Buildings: The Origins of American Comics”:

Daredevil, Marvel. I’ll start my pull list with the best. Mark Waid and Chris Samnee provide a monthly lesson on how to do superhero comics right. Issue #25 provided one of the best-choreographed fights in a comic in recent memory and #26 was an exercise in tension and paranoia. Simply fantastic storytelling from what is obviously a perfect synergy between writer and artist.

Hawkeye, Marvel. Matt Fraction and David Aja (and guest artists) somehow manage to do an experimental indie comic with a corporate-owned superhero, and an Avenger no less. Fraction’s plotting and dialogue is clever and witty and Aja’s storytelling and design are downright inventive. The book is an inspiration. 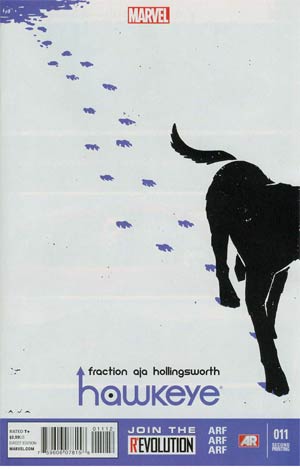 Batman, DC. Scott Snyder and Greg Capullo bring a fresh spin to a character who’s been around since my grandfather was young! As much as I appreciated the Morrison age of Bats, the Snyder/Capullo run brings the Dark Knight back to a more straightforward and clear style of story. The “Court of Owls” and “Death of the Family” arcs are definitive Batman.

All New X-Men/Uncanny X-Men, Marvel. Brian Michael Bendis has injected new life in the X-Men and the X-Men have recharged Bendis’ writing. The conceit in All-New of bringing the original team to the present could’ve been a horrible move, but Bendis makes it work and nails the characterization of each of the five. Stuart Immonen succeeds gloriously with both the small and the big moments. The anti-hero team in Uncanny is compelling and the art by Chris Bachalo and now Frazier Irving has been inventive and eye-catching

Wolverine and the X-Men, Marvel. With Uncanny and All New so great as of late, you wouldn’t think one would need yet another X book. But Jason Aaron and Ramon Perez give me a more offbeat and fun take on the mutants. Aaron’s writing stresses characterization (always spot-on) and craziness. Artist Ramon Perez shinned on the recent issue taking place in the future.

Five Ghosts, Image. Writer Frank Barbiere and artist Chris Mooneyham bring my favorite new Image book. It’s pulpy fun with a concept that has everyone I know asking why they didn’t think of it. Mooneyham’s art is a nice melding of Neal Adams, Klaus Janson and his own cool aesthetic.

Avengers/New Avengers, Marvel. I loved Bendis’ Avengers for years and it wasn’t until Jonathan Hickman took over as writer did I realize a change was needed. Hickman perfectly melds high concept big ideas with superhero action, giving us books that feel completely different from Bendis’. Everything about these books are BIG. The team rosters, the threats, the concepts. They’re like summer blockbusters with brains.

Indestructible Hulk, Marvel. Mark Waid’s other book. I like the fresh concept of The Hulk being a weapon for S.H.I.E.L.D. and the current arc featuring a team-up with Thor and drawn by the great Walt Simonson is pure joy.

Thor: God of Thunder, Marvel. Jason Aaron and Esad Ribic’s “God Butcher” story grabbed me from the first issue. To me, this book is the big creative success of the Marvel Now initiative.

Superior Spider-Man, Marvel. I’m enjoying this book. Doc Ock in Spidey’s body should be stupid, but Dan Slott makes it clever and fun.

Adventures of Superman, DC. I don’t particularly care for the New 52 version of Superman, which is why this new anthology is for me. The first issue, for example, offered three shorts by top creators like Jeff Parker & Chris Samnee, Jeff Lemire and Justin Jordan & Riley Rossmo. All three were charming and timeless.

Seth co-authored “Leaping Tall Buildings: The Origins of American Comics” with Christopher Irving. He’s been writing his semi-autobio series, Schmuck, which appears in monthly installments at TripCity.net. He has plans to collect and publish it as a book in 2014. Check out more of his work at SethKushner.com.