WHAT I’M READING, by Jim Salicrup

The former Marvel editor and current editor-in-chief of Papercutz, has great list of recommendations!

Monday through Friday, I start my day by checking on comics by Connie Sun: conniewonnie.com. It’s “an illustrated status message a day” by a very talented, bright, and funny young cartoonist. Her bio states “Asian-American cartoonist from CA, currently living in NYC. Single Girl, Asian Daughter™. I work in higher education by day & I sleep at night. In my free time, I write & draw. Self-taught; can’t stop. Cartooning daily, Mon-Fri.”

Connie is a great writer and an amazing artist. I can’t get enough of her work! Her strips feature a young, single Asian-American struggling with life and the NY dating scene. The strip is brilliant. 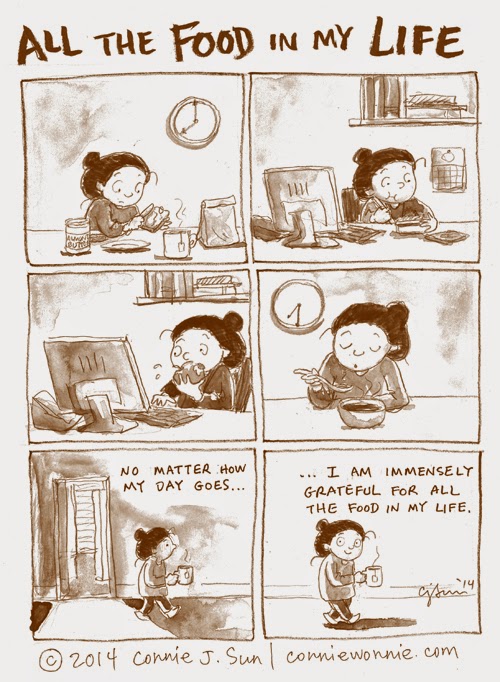 I also read every day Zippy the Pinhead by Bill Griffith, Heart of the City by Mark Tatulli, Non-Sequitur by Wiley Miller, as well as Garfield by Jim Davis (Papercutz publishes The Garfield Show graphic novels based on the animated series, which is better than anyone suspects!), and Dennis the Menace by Marcus Hamilton and Ron Ferdinand.

I also love every Lucky strip, a semi-autobiographical comic posted online at gabriellebell.com by Gabrielle Bell. Another brilliant young cartoonist. Her work is always inventive, smart, and interesting. Gabrielle and Connie should both be superstars. 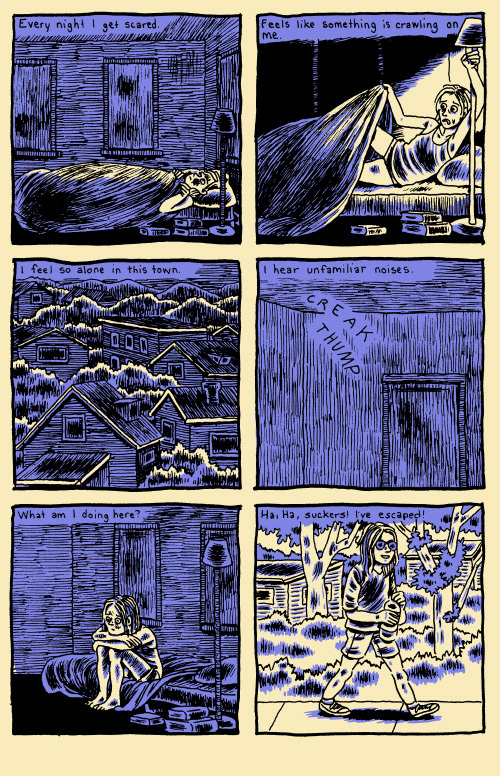 At the comicbook store, I enjoy Minimum Wage, the revived series by Bob Fingerman from Image Comics. This comic picks up a few years after the original series left off, so I feel like I’m catching up with old friends. While so many mainstream comics writers have abandoned “thought balloons” to write more cinematic-style comics, Fingerman uses the thought balloon to excellent effect to reveal his characters’ inner monologues—especially when he meets women.

Of course, I followed Superior Spider-Man, and just picked up Amazing Spider-Man by Dan Slott and others. Steve Wacker was a great Spidey editor, I hope the books continue to be as good under the new editors.

There’s a very hard-to-find comic book series called Yi Soon Chin produced by Onrie Kompan Productions, written by Onrie Kompan and David Anthony Kraft. Like some of the very best comics of the ’70s, this series has its own point of view, style, and feel. Based on a true historical character, the creators take all sorts of liberties to create a series that would fit right at home on HBO. If you’re at a comic-book convention anytime soon, you may run into Onrie himself hawking copies of Yi Soon Chin in front of his booth. He’ll probably make you an offer you can’t refuse — it’s a good deal for some exceptionally well done comics. Be sure to take him up on it—you won’t be sorry!

While there are literally dozens of other comics, graphic novels, and classic comics and strip collections that I’m constantly buying and reading, I’d like to mention a few titles I happen to publish at Papercutz.

Since these comics are entirely produced overseas, I have little to do with the creation of these (aside from editing our translated editions), so I’m not exactly tooting my own horn—these are comics that I eagerly look forward to reading: 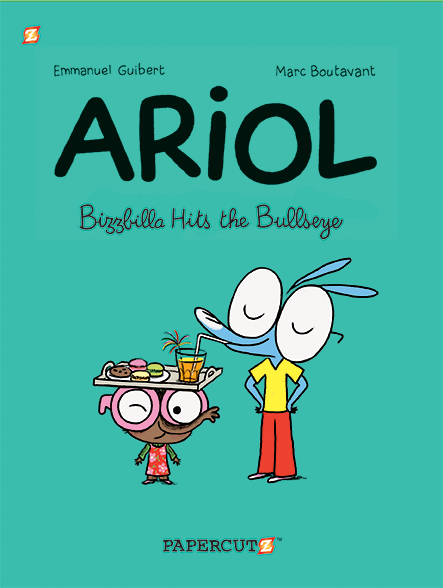 The most successful of these is Ariol by Emmanuel Guibert and Marc Boutavant, while Ernest & Rebecca, by Guillaume Bianco and Antonello Dalena, is struggling to find an audience.

Both series are about childhood and life. In Ariol, the kids are depicted as animals — Ariol is a blue donkey, his best friend is a pig, he’s in love with a cow, etc. In Ernest & Rebecca, the characters are all human, except for Ernest, who is either a sentient microbe or a figment of Rebecca’s imagination.

Each volume of Ariol features a collection of short stories that capture what life is like for a young, happy, comics-loving kid, at school or with family and friends. The stories are always fun, well-written, and incredibly drawn. Ernest & Rebecca features long-form stories that showcase the life of six-and-a-half year-old Rebecca and her family, which when we first meet them, are on the verge of coming apart. This series, while superficially like Calvin and Hobbes (the relationship between the two lead characters), is really a brilliantly written story about a modern family. Rebecca’s older teen sister, her mom and dad, are all major characters, and are all going through major changes in their lives. 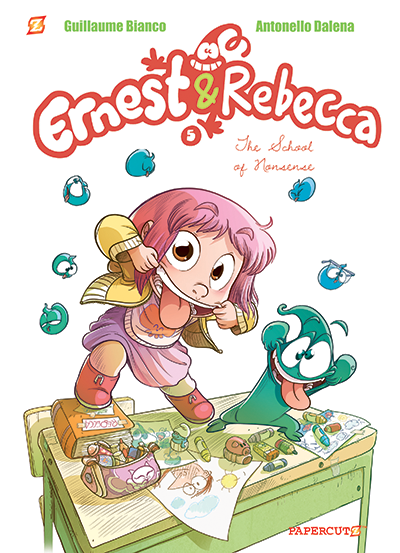 Like the best of Buffy the Vampire Slayer, the scripts can go from drama to comedy in a split second. You’ll laugh, you’ll cry, and you’ll love it!  The “problem” with both of these titles may just be that they are published by Papercutz, and we have a strong reputation of publishing comics for kids, or as we prefer to say, we’re dedicated to publishing great graphic novels for all ages.

So, it may be that adults who might love these titles, dismiss them, thinking they’re just for kids. Ariol seems to have found its audience though, and we’ve gone into second and third printings on the first volume, but Ernest & Rebecca could use your support.

There’s also Benny Breakiron by Peyo, the creator of the Smurfs. Unlike Ariol and Ernest & Rebecca, Benny Breakiron is pure fantasy — a great, classic strip for kids that I love too.

The premise is as simple as can be: Benny is a young French boy with super-strength, except when he gets a cold. Recent volumes have been greatly inspired by Herge’s Tintin and the James Bond movies — these comics were produced in the ’60s, after all. Maybe I love Benny because I would’ve loved these comics as a kid.

But the stories are charming, filled with fun and adventure, and illustrated wonderfully, with a Mad Men-meets-the-French-countryside vibe, by Peyo and his assistants.

Finally, I must mention Classics Illustrated Deluxe #11: “The Sea Wolf” by Jack London, adapted by Riff Reb’s. All you have to do is look at any page of this masterpiece, and you’ll want a copy of your own — it’s that good! 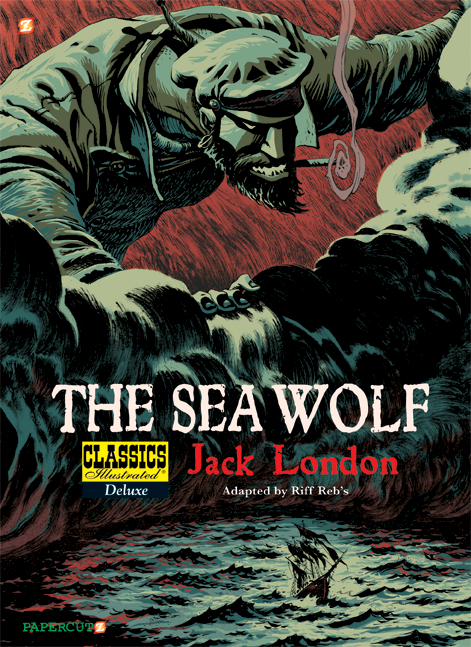 That’s enough! There may’ve never been a time to get so many great comics —new comics, old comics, domestic and foreign — they’re all out there to enjoy!