Good lord this is not only a really good list, it’s really, really funny — Dan: 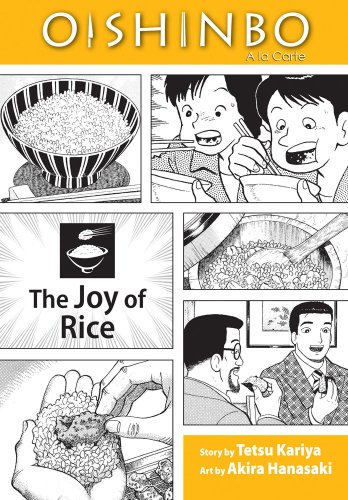 Oishinbo: A la Carte, Viz Media. I’m completely fascinated by the entire culinary world, from the ingredients, the cooking styles, food culture, chefs, knives, forks, spoons. Ask me what I think about the current war between restaurants/bars and food trucks next time we’re at a convention together. Go on, ask me, I dare you. I will fight you right there in the middle of the show floor, precious Hawkeye figurines be damned (what is up with those, by the way, the Captain America ones look just like Chris Evans but Jeremy Renner has this weirdo shrunken apple head thing going).

My vague point is that Food Is Cool. And comics are pretty cool, too. So I’ve been reading the Oishinbo series released a few years ago by Viz Media with a whole lot of wide-eyed wonder, believe me.

As I’m writing this I’m eating a breast of fried chicken prepared following the Momofuku David Chang recipe (you brine the chicken pieces in a mix of salt and sugar for a day, more if needed, steam the chicken in a rice basket until it’s completely cooked. After that, we drop them in the deep fryer. No breading is needed or extra salt at all and it tastes very similar to some damn fine KFC. No seriously, look it up! It’s great chicken). That may seem pretentious but I’m eating it over the sink in cut-off jean shorts, so. Yeah. ANYWHO. 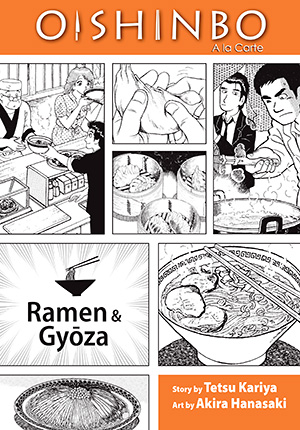 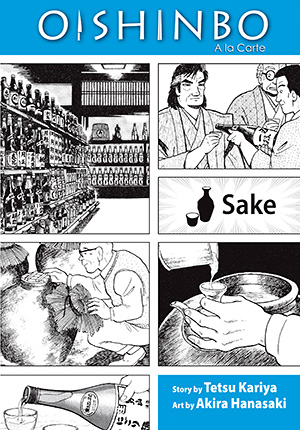 The Oishinbo series follows the sort of adventures of Yamoako Shiro, the son of prominent and famous chef Kaibara Yuzan. They don’t get along. I say “sort of adventure,” because Yamaoko is often outshined by the eccentric chefs featured in the comic.

The basic premise is that the publishers of Tozai News are celebrating its 100th anniversary and so they want to put together this Ultimate Menu. So they hire Yamoako ’cause he has a really awesome palate and huge expanse of food knowledge, though he is constantly berated by his dad who is, frankly, a huge asshole.

I love this book because they delve deep into Japanese food culture, as well as including instructions for preparing all kinds of fish, vegetable and meat dishes, and it’s really cool to see how the Japanese view other foods in other countries (it’s overwhelmingly positive, surprisingly).

There are a bunch of books, too, and they explore all kinds of areas, from knife sharpening, to how to warm sake, deboning fish, MAN, it’s just so great. The art, by Akira Hanasaki, is just so fantastic, the drawings of food alone! Makes your mouth water. 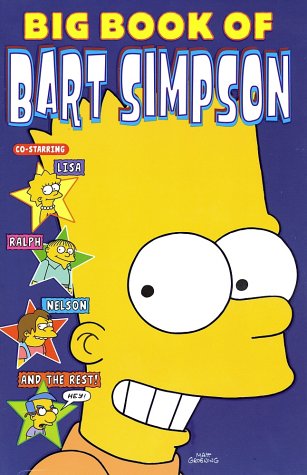 Hey, hi, it’s me that thinks The Simpsons need to be cancelled, like, right now. I mean, I caught a recent episode and Lisa made a gay joke about Milhouse and Bart’s relationship. Didn’t the John Waters episode already pretty much cover everything that could be funny about that, and wasn’t it way, way funnier, more subtle and actually more positive than anything Lisa’s mouth could spew forth? I digress.

I’ve been getting into Simpsons comics collections lately because the humor takes me back to around Seasons 2-5, when the show was just a juggernaut but still pretty much a baby. The Big Book of Bart Simpson reflects when Bart would say “Eat My Shorts,” and it wasn’t ironic. 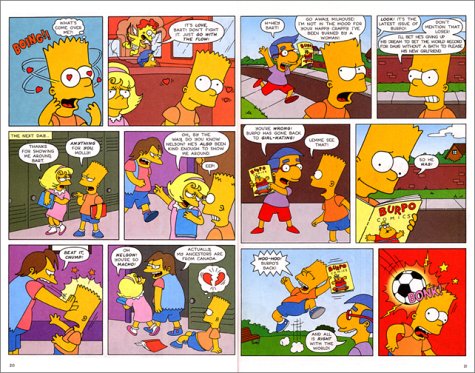 It’s a really bizarre collection of Bart-centric comics, but the thing is that Bart, like, never comes out on top. The most depressing story is this one where he’s trying to find what his talent is, just to be continually crushed by other people being better than him. I dunno what writer decided to make Jimbo Jones a better skateboarder than Bart, but whatever, it’s there. And even after Bart figures out he’s great at multi-tasking, he STILL gets his dreams and hopes dashed upon the rocks of mediocrity. Yikes.

The best stories all involve Bart being abducted by Krang and Kodos, and we get to see familiar characters as robots and three eyed aliens and all kinda cool stuff. John Costanza really nails the Simpsons style, and adds a lot of his own spin. It’s neat.

I do licensed stuff and it’s tough to sort of put your name on it, but Costanza does it. I’d like to mention there is a comic about Lisa tripping balls on cough medicine and it totally rules. 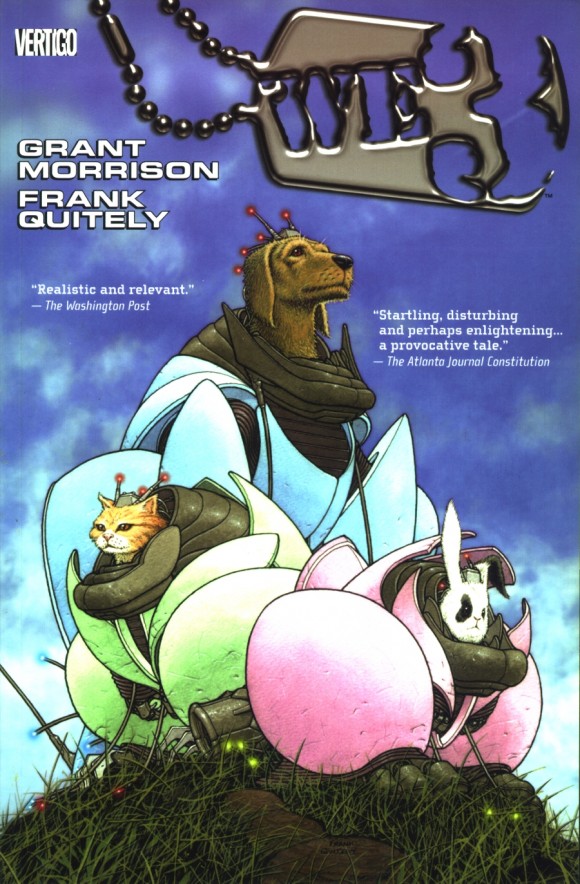 WE3, Vertigo. What can I even say about WE3? If you haven’t read this by now, I don’t even know, man. It’s not your fault, hush child, hush… OK, so WE3 is amazing and I’ve been rereading it to appreciate the art.

Yeah, yeah, the story by Grant Morrison is cool or whatever but it wouldn’t be jack shit without the simply astounding art of Frank Quitely. And, really, what’s so, so great is the panel set-ups, more than anything else to me.

Oh, the cyborg robot designs for the animals are also awesome, especially the rabbit’s, Pirate. Ugh, I’m about to cry. I refer two pages that really stand out: One is a double spread of this dude just getting, fucking wrecked by bullets, but they way it’s drawn they’re coming right at you and it’s insane.

The other is a scene where the army is trying to take down these cyborg pets and the destruction is shown through a series of super tiny panels spread through the page. It’s breathtaking, especially the damage wrought by the cat, Tinker. Holy moley, that cat.

Oh, yeah, this book is about pets being experimented on and made into weapons for the government, they escape, and stuff happens. Really, that this isn’t a movie yet is very, very weird. 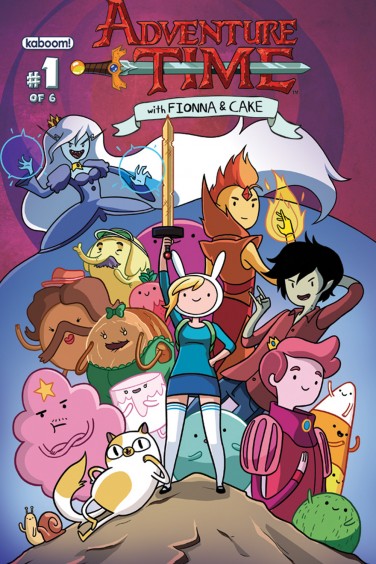 Adventure Time with Fionna and Cake, kaBoom! Yeah, yeah. I do Bravest Warriors for kaBoom and some other junk, but c’mon, only a couple people are still reading this after my rant about food trucks earlier.

This is one of my favorite Adventure Time collections ever. I keep it to myself that I actually prefer the gender-swapped versions of Adventure Time characters over the main ones.

The Fionna and Cake comics are better than the couple episodes they had on Cartoon Network, though, and a lot of that is because of the artwork by Natasha Allegri, of Bee and Puppycat. Good stuff. I describe it as “floaty” art. Everything looks like if you touched it, it’d feel like a warm cloud.

The concept is pretty basic, you know, take down the Ice Queen and all that, but the stand-out story is about the Lumpy Space Prince wishing he was handsome and turning into this, frankly, bizarre and hilarious Sailor Moon-looking character. But nobody can resist him! They must touch the Lump, dig? 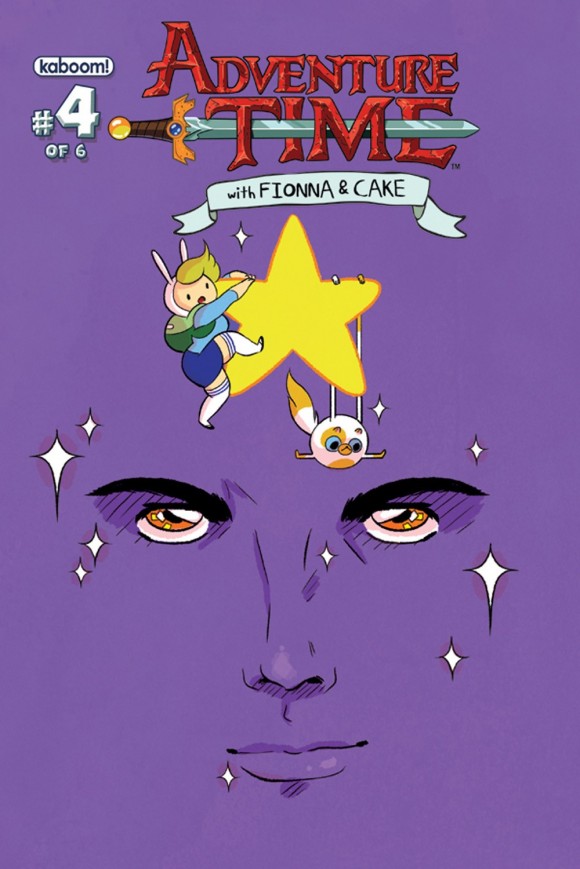 There is also some really great work with the page layouts, big ol’ panels and some really sweet goings-on with the negative space and color.

Most of my stuff is colored by another artist so this type of thing makes me incredibly jealous and I want to rip up hunks of grass and dirt and throw them in the air like an angry gorilla. So, yeah, this book makes me both happy as a clam and mad as a primate. Cool!