The writer of Grindhouse from Dark Horse, the forthcoming Lady Zorro from Dynamite and a whole bunch of cool books gives her own reading recommendations in our latest WHAT I’M READING column.

Vandroid, by Tommy Lee Edwards, Dan McDaid and Noah Smith, Dark Horse. This is the best mostly-overlooked miniseries of this year: an 80’s-style action story but with added crazy. I bought this for Dan McDaid’s art, which I just adore, and which hits new heights here. The story itself is a hoot — once-famous van customizer (custom vans used to be A THING), now fallen on hard times, is convinced by his dodgy friend to build a robot that said dodgy friend can put his dodgy AI experiment into. It’s a man … it’s got airbrushed van art on its back … it’s VANDROID, and now he must quaff perfume (don’t ask) and fight an evil Texan and the 30 or so totally nuts gangs who work for him. Great art. Crazy story. More Easter eggs than the Easter bunny’s closet. Is it art, man? No. Will you get serious indie cred points for flipping through it in Starbucks? No. Will it make you happy? Yes. (Also: Vandroid has a soundtrack!) 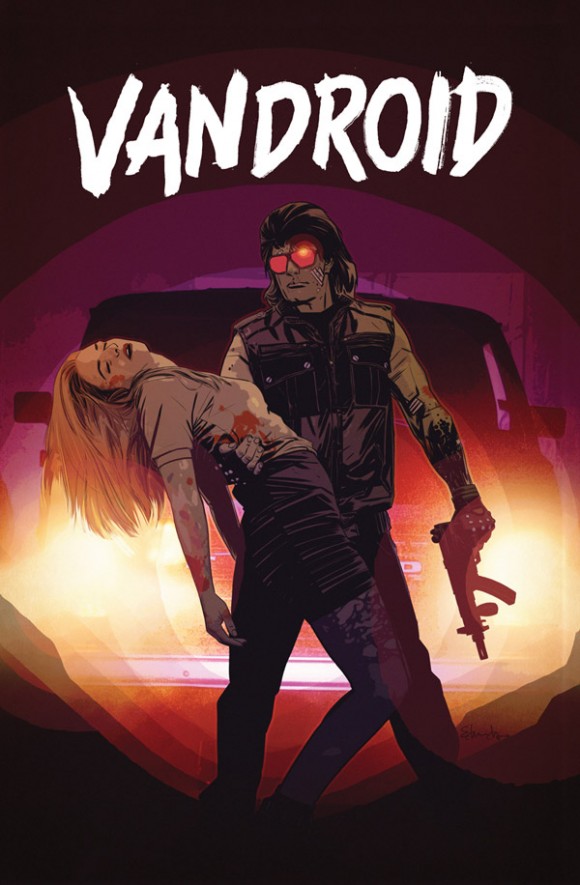 Hip Hop Family Tree, by Ed Piskor, Fantagraphics. I don’t care if you don’t give a shit about hip-hop. (Although somewhere, an angel weeps for you. NB, Drake doesn’t count.) Just go buy this book. A superhero-riffing, world-building, toe-tapping, beat-hitting story of a whole lot of people, some brilliant, some lucky, some crazy, and some all of the above. And if you like hip-hop, and nice things, go buy the cased edition because there’s a special secret ‘zine in it about Rob Liefeld and Easy E that is just super fabulous. Ed’s art is clear, full of personality, and utterly meticulous in how it is presented. This is a bit like Copra; this is the book you’ll be stealing things from. Speaking of which… 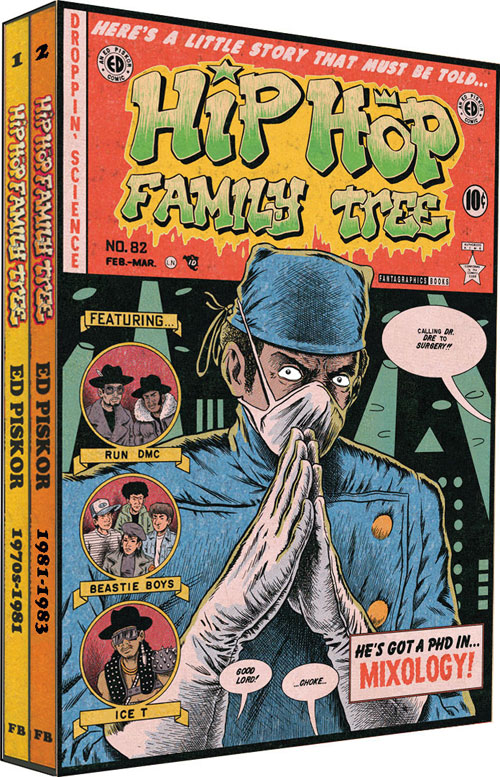 COPRA, by Michel Fiffe (collections from Bergen Street Comics) … COPRA is the only comic I subscribe to. I am broker than a church mouse, so for me to shell out money in advance for a comic? You better believe it’s great. Although drawn in a very unique indie style (that I LOVE), COPRA is (like HHFR) STEEPED in the history of superhero comics. Fiffe and Piskor need to have a throwdown / freestyle competition about who knows more about comics history and what came before them. I actually don’t know who I’d bet on for that one. Anyway. COPRA. A superhero comic about a renegade group of superpowered government agents. So far, so normal, right? Well, everything about the book is just so much better than everything everyone else is doing. Again, from the SFX to the page layouts, if you love and make comics, you will be stealing ideas from this book. The last couple issues have been standalone, and nearly rival my absolute favorite issue (#8, giant above the city superhero fight). 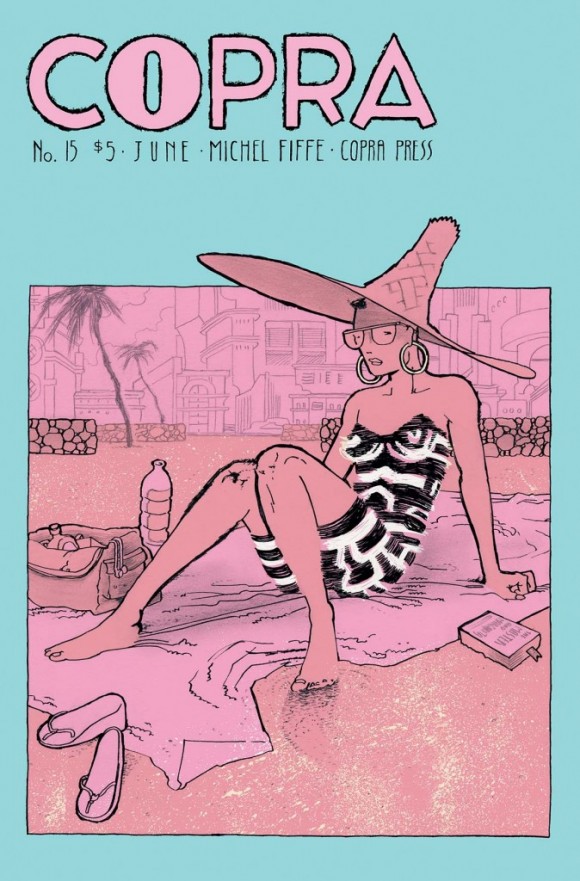 Fear Agent, by Rick Remender and Tony Moore and Jerome Opena, Dark Horse. Yeah, I’m partying like it’s 2007. I’ve liked Rick’s work a lot elsewhere (LOVE Deadly Class, LOVE his X-Force run) and picked up the first two Fear Agent trades at Phoenix Comicon. Well, THAT was a mistake. Rick is great at cliffhangers and trade #2 ends on a doozy. Went out and got #3 and now saving up for the rest of the trades. It’s just a great big FUN adventure tale of an ass-kicking, whisky-addled Texan IN SPACE (and everything is better IN SPACE, that’s rule 602) and the aliens who hate him. And the ex-wife who’s not so keen on him either. But like all of Rick’s work, there’s a lot of heart in it, and also a lot of “this can’t possibly get worse for our hero — whoops, it did.” (Also: there is a GIANT HC omnibus edition of Fear Agent that just came out.) 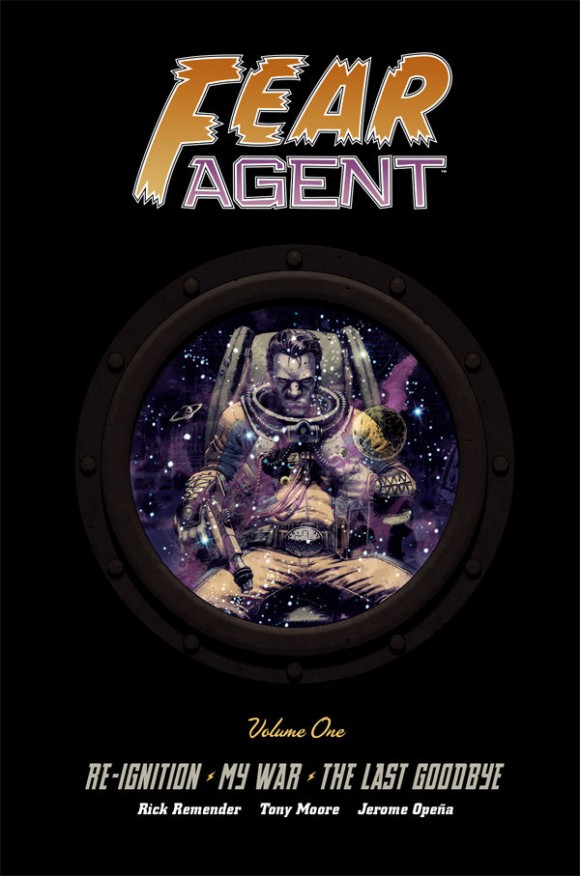 Transformers vs. GI Joe, Tom Scioli, IDW. Let’s talk about more stuff I’m stealing from! First, I don’t care about Transformers (MICRONAUTS REPRESENT.) GI Joe, though? Down with that. Baroness. Ninjas. Get in. But this book is really about Tom’s visual storytelling. Along with Copra, it’s one of the most unique-looking books on the shelf right now, and also along with HHFT, one of the most steeped in a thorough knowledge of comics’ visual history. It’s also the COMPLETE antithesis of my storytelling style. My strongest influences are probably Naoki Urasawa and Jodorowsky/Bilal/Moebius, so my first reaction when approaching a page is to have like 12 panels of reaction shots and cutaways to metaphors/atmosphere. You know, build the story up via a mosaic of small moments, rather than the big American establishing splash. Tom is the opposite of that. He takes from Steranko: how FEW panels can you tell a story in? And that’s something I need to try, because in his hands, it REALLY works. There’s still heart. There’s still subtlety. And there are a lot of WOW moments. (And ninjas. And the Baroness.) 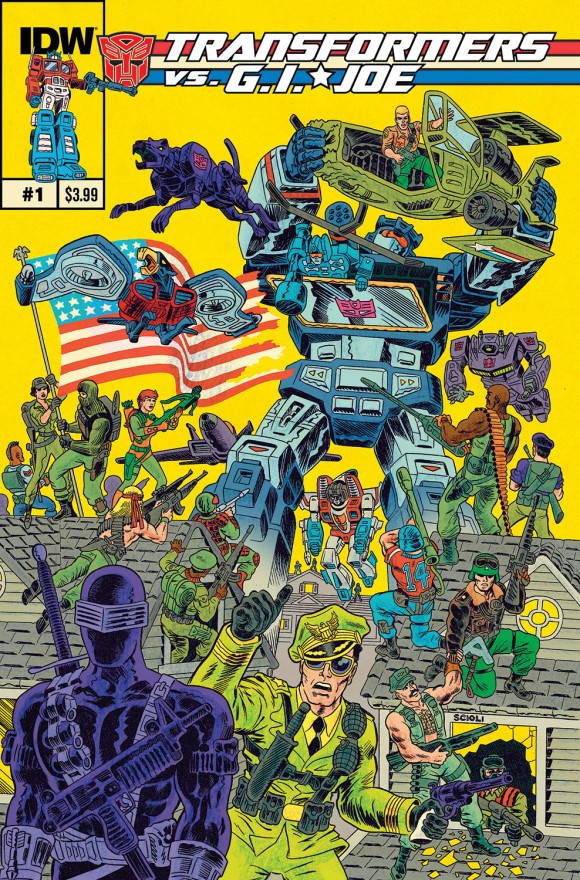 In terms of prose, mostly I’m reading things for research for my next creator-owned book and I can’t say much about that at the moment. Royall Tyler’s translation of The Tale of Genji awaits half-read on my bedside table. I always talk about how much I hate 1,000-page, 10-part fantasy epics but I LOVE Japanese epics. Well, I loved The Tale of the Heike (again, the Tyler translation) and I like Tale of Genji, but the problem is (strictly entre nous) Genji is kind of a jerk who does dodgy things with young boys and girls in the beginning and what is really fascinating is not him, but all the other characters … mostly the women, who react as best they can to their own ebbing and flowing fortunes as measured by their own and their male relatives’ successes in becoming close to the Emperor. If you’re new to Japanese epics, I’d definitely start out with Heike because that’s basically the story of a rather arriviste family who rises quickly to power and, getting to the top, now has to stay on that slippery top. And boy howdy does that prove difficult. Lots of battles. Lots of epic deaths. Lots of great characters. 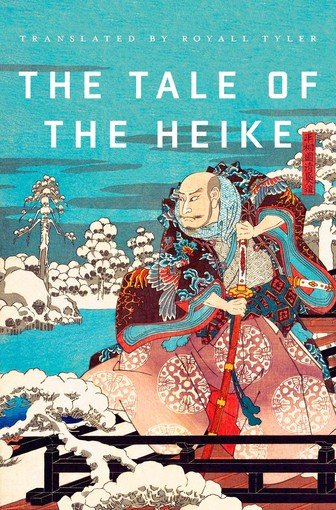 I also have The Black Panthers Speak (Philip S. Foner, Editor, Da Capo Press) waiting. I love reading speeches and statements and some of the Panther speeches you really DO have to read out loud, they’re so wonderful. Again, only about a quarter through it thanks to ALL THE RESEARCH READING, but keen to get back to it. 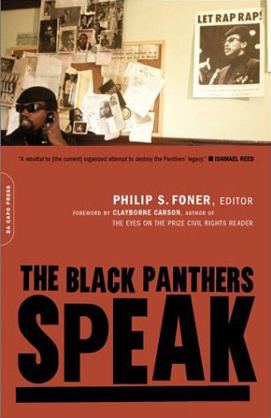 For more by and about Alex de Campi, check out her website right here.