REVIEW: G.D. Kennedy binged through Netflix‘s excellent Daredevil series and has some sage thoughts on the experience. 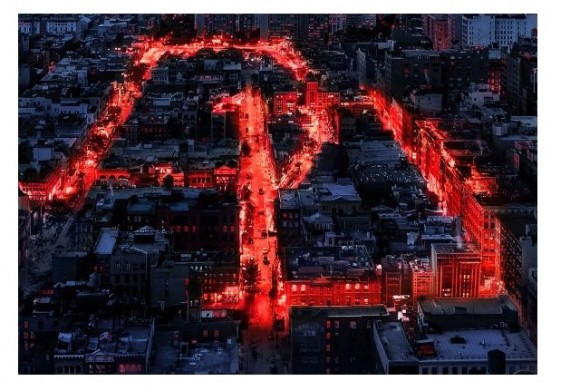 Daredevil has been  a constant work in progress through his fifty-one years. While the basic premise has remained constant – he is Matt Murdock, a lawyer from Hell’s Kitchen who, blind due to a childhood accident but blessed with incredible senses, takes up the mantle of neighborhood protector – Daredevil, maybe more than any other major character, has served as a blank canvas for his writers, with some of the medium’s best, including Frank Miller, Brian Michael Bendis, Ann Nocenti, and, of course, Stan Lee, taking their turns at draping the character in their own styles, using the character as a sounding board for their own worldviews.

The most revolutionary turn was by Miller, when, some thirty-ish years ago, he pulled Daredevil from the jaws of cancellation by shifting his prerogative from cartoonish fisticuffs to gritty hyper-realism. This realignment resulted in a character constantly attempting to resolve polar aspects of himself: a lawyer trying to reconcile his oath to uphold the law, but torn by its frequent incompatibility with justice; a Catholic trying to square the benign tenants of his faith with his own often vicious conduct; and a son who wants to abide by the wishes of his deceased father – to use his brains and not fight – while recognizing the good he can effectuate as a costumed hero. Miller’s shift also led to a focus on organized crime as the antagonist, introducing Daredevil to Wilson Fisk, a/k/a the Kingpin, a move that played perfectly on Murdock’s life as a lawyer – you can’t fight Thanos with the legal system, but you can, and maybe even must, use it to fight the Kingpin.

These foundational elements place Daredevil at odds with the existing Marvel cinematic universe, which is based on the decisive morality of iconic, if cartoonish, superheroes engaging in cosmic adventures and world-saving.  But Daredevil has never quite achieved the popularity of Captain America or Iron Man, is more apt to save a bodega than a continent, and his forays into mainstream culture are relegated almost entirely to the Ben Affleck movie/disaster from 2003. Given this, making Daredevil the flagship series for Netflix’s Marvel-based shows was a clear risk, both for the character’s lack of a stable groundswell fan-base, and because hesitation with the frequently heady subject matter would leave the series neutered, akin to NBC’s Constantine, which appears destined for a premature demise due to primetime restraint and brand protection prohibiting the series from playing in its darkest – and most successful – areas. 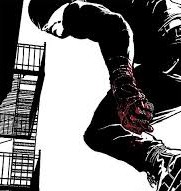 The series, which launched on April 10, has proved to be a revelation, a refreshing departure from Marvel’s prior efforts as it eschews the “hero” archetype for character-driven drama. This is not a clean, glossy show about mystical super-beings, but is the story of a masked vigilante – the name Daredevil is not used until the penultimate scene of the season – that embraces the darkest aspects of what it means to be a hero. The result is more of a patient and character-oriented (and better-executed) version of Christopher Nolan’s Batman trilogy than it is the Avengers. It is visually and thematically stark with no pretense of restraint, visceral and at times brutal, both for its readiness to show the bloody physical aspects of vigilante crime fighting, and for its willingness to address headlong some of the most horrific aspects of criminality, from human trafficking to the drug trade. 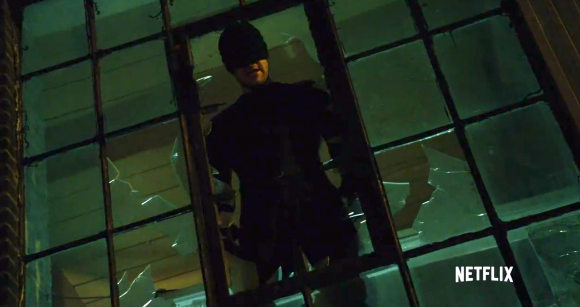 The basic story is relatively simple: Fisk is operating a substantial criminal organization in Hell’s Kitchen, and Murdock is driven to obliterate it through whatever means necessary.   But little in this show is so clear; while relying heavily on Miller’s work, most notably 1994’s Man Without Fear mini-series, which deconstructs Daredevil’s origin from deliberate hero to an organic progression that begins at undisciplined vigilante, the series borrows the most thematically from Bendis and Alex Maleev’s run, which explored the fading moral clarity of Murdock’s actions in protecting Hell’s Kitchen, and in particular as contrasted with the conduct of Fisk. What may be the thesis for the entire show is uttered mid-season by reporter Ben Urich (Vondie Curtis-Hall), saying, “There are no heroes and no villains. Just people with different agendas.” This holds true throughout – it is not always clear who is the hero, who is the villain, or where the line between the two starts and ends. In the second episode, Murdock tortures a mobster for information and, afterwards, throws him off of a roof into a dumpster below; the goon falls into a coma, only to be awakened it so that his accomplices can probe him for information, though this will lead to his death. The parallel is unmistakable.

The show constantly plays off of these moral gray areas, and maybe is it nowhere more evident than with respect to the duality of Murdock and Fisk. Fisk is ostensibly motivated to the same end as Murdock, making Hell’s Kitchen a better, safer place, and both are willing to use extreme measures to accomplish this goal. It is not always evident which of Murdock or Fisk holds the moral high-ground – both use violence to accomplish their goals, both willfully undermine the societal structures which they claim to value, and they even frequently find themselves aligned against the same enemy. Fisk and Murdock are constant mirrors of each other, both insecure but ambitious, ruthless and restrained only by their personal morality, isolated orphans desperately craving an emotional connection but pushing away companions for (legitimate) fear for the danger that their association carries. At times, it appears the sole difference is the willingness of Fisk to casually kill to achieve his goals, while Murdock stubbornly refuses to cross that line, a fact for which he is admonished by his mentor, Stick. 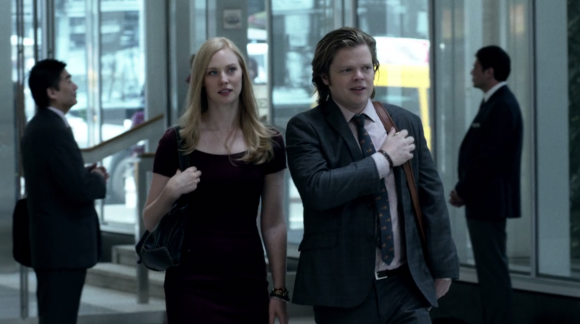 This muddied dichotomy, however, allows for the series’ side characters to play a much greater role and, in many ways, to act as the show’s moral compass. Where Murdock resorts to violence, his best-friend and law partner Foggy Nelson (Elden Henson) insists on pursuing the Fisk through the courts and legal action, working towards the same ends as Murdock and certainly exposing himself to serious peril at times, but without compromising himself. Similarly, Karen Page (Deborah Ann Woll) is able to take on a substantial role in the story, spearheading the inquisition into Fisk’s illicit activities, though her character wanders into moral ambiguity, as she displays a casual willingness to endanger herself and others while also concealing unspoken aspects of her past.

Ultimately, one of the most appealing aspects of the series is that it is unbound by the time constraints of cinema and, as a result, is able to take its time to slowly build and nuance the show’s characters. The series revels in the aspects that make the comic character compelling: it is a study of a seriously flawed, conflicted, and self-destructive character who nonetheless is motivated by a sense of justice, the ultimate Catholic constantly seeking absolution through martyrdom. To this end, Charlie Cox does an impeccable job of portraying Murdock as the fallible character that he is – over-confident, self-righteous, and self-destructive – but also endearing, a character who, despite serious limitations, is driven by a strong moral conviction to a greater goal.

And this may be what makes the series so effective: it is about human characters – not gods or super-men, but flawed and intimately relatable individuals who are much smaller than the problems facing them. We fear for Murdock because he is human, because he can lose – he is routinely broken and battered, he struggles through fights, and he often only pulls through as a result of his friends – and because he is imperfect, prone to cockiness, chronically convinced that he is the smartest person in the room and, as a result sells his adversaries short (or over-estimating his own prowess). Maybe the most iconic scene of the series appears at the end of the second episode, where after a too-brief recovery from serious injuries, Murdock pushes him self to a warehouse filled with human traffickers and – over a two-minute longshot – proceeds to clear two rooms filled with these thugs, taking hits along the way until, at the close, he is physically exhausted, stumbling in the hall and barely managing to maintain even a basic fighting pose, and there is serious question as to the outcome until Murdock eventually, finally overcomes his last adversary.

But as much as we fear for Murdock because of his humanity, we also fear Fisk, played with a menacing aplomb by Vincent D’Onofrio, because he is human, because monsters like Fisk can and do exist, villainous characters capable of justifying horrific acts while exerting power and control over our everyday lives without our knowledge. The series takes time to lead us through Fisk’s childhood, and then to build Fisk’s character through his awkward attempts to woo Vanessa Marianna – in her own right, a subversion of the “pixie dream girl” trope, displaying a shocking acceptance of Fisk’s most vicious qualities, and even encouraging them – who ultimately becomes Fisk’s point of vulnerability which, when prodded, unleashes his feral reprisal. Loki and Thanos and Hydra are easy to identify as villains – they are hyperbolic representations of evil, with extreme and unrealistic world views; conversely, Fisk’s villainy is not so clear, as it is hidden behind purportedly benevolent goals and personal vulnerabilities. 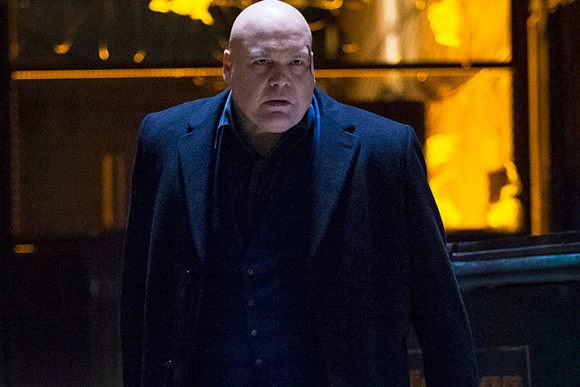 There are a few warts to the show, which is inevitable. Maybe the most glaring is the anti-climactic reveal of Daredevil’s super-hero costume in the final episode: the costume is clunky and comical, making Daredevil’s svelte ninja moves awkward – this may be the sole aspect on which Affleck’s disaster is superior, and simply must be changed. Besides this, after a slow and gratifying build over the first twelve episodes, the final act is rushed and somewhat incomplete, a wasted opportunity to let D’Onofrio play Fisk unchained in the climax. (And, as someone who lives in Hell’s Kitchen, the insistence on shooting scenes in Brooklyn and labeling it Hell’s Kitchen is distracting – it just is not possible to look over water and see the Manhattan skyline from Hell’s Kitchen.) But overall, these are nitpicking complaints that would go unnoticed in a show of lesser caliber.

Right now, it is unclear whether there will be a second season of Daredevil, although given the quality of the series and the almost unanimous positive reception, it is hard to imagine that there won’t be. At a bare minimum, it bodes well for the balance of Netflix’s Marvel shows – Jessica Jones, Luke Cage, Iron Fist, and, ultimately, the Defenders team-up – but, if this is the end of Daredevil’s solo series, it serves as a worthy redemption for the prior movie, and an excellent standalone story.