BAT-MERCH OF THE WEEK: DC Collectibles has two Clown Princes of Crime coming out …

It’s the fifth Wednesday of the month and there are no Batbooks jumping out at me, screaming “Read me!”

There are, however, two funky-looking Joker action figures from DC Collectibles that will scratch that Bat-itch: Icons Joker and the Greg Capullo Designer Series Joker.

Icons Joker is nominally based on his look from A Death in the Family, but that’s a conceit. He’s not based on Jim Aparo’s art, just the outfit he wore in that story – and many, many others. 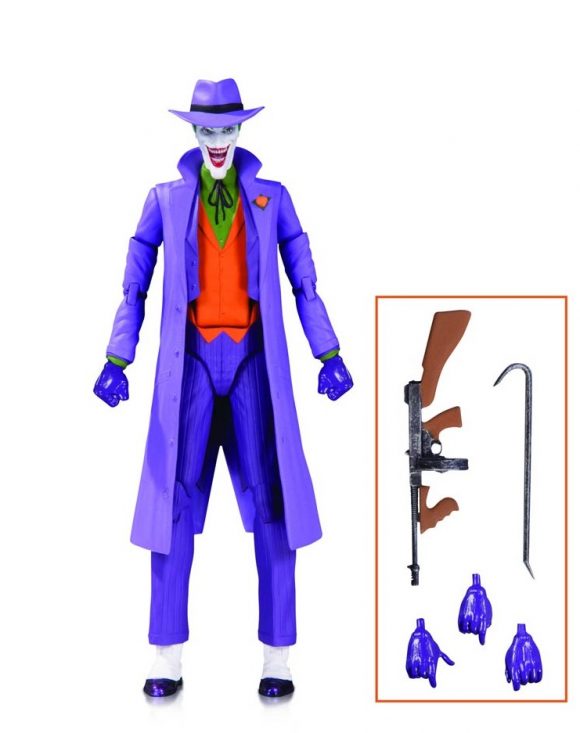 This is just pretty much classic Joker, with long coat and hat, plus machine gun and interchangeable hands. He does, however, come with a very Death in the Family crowbar, so you can have him beat the tar out of an old-school Robin action figure if you’re so sickly inclined. (I’d prefer to have my Damian action figure take that crowbar and bash the Joker across the face, personally.)

I actually like the look of this figure precisely because it’s such a classic design. He could just as easily represent Marshall Rogers’ Joker, for example. Or the Golden Age Joker (on whom Rogers’ Clown Prince of Crime was based).

My only beef about the Icons line is the scale. I’ve grown accustomed to DCC’s 7-inch scale and these 6-inch figs seem skimpy by comparison. They also don’t match up well with other DCC lines – which I suppose is the point: Changing the scale can give collectors an incentive to buy new versions of figures they already have. Then again, that could turn other collectors off. 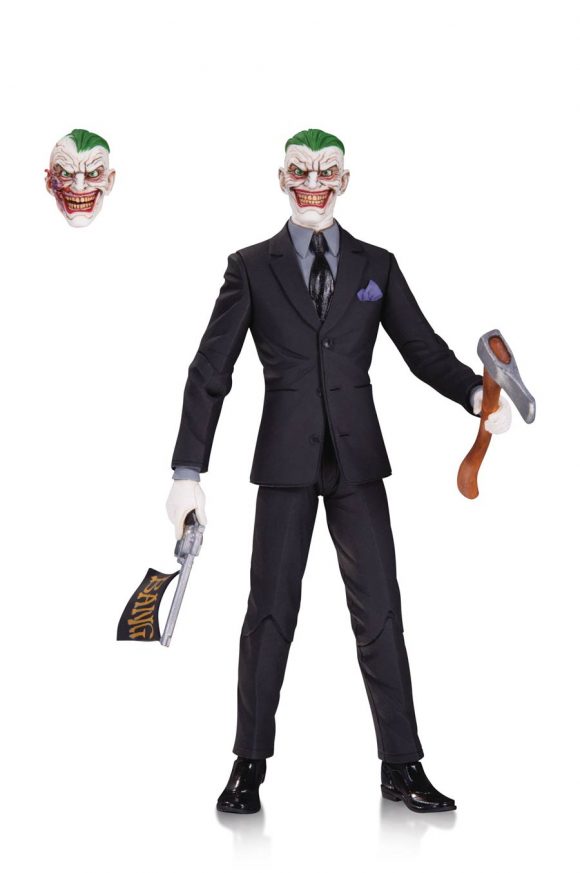 Anyway, I’ve also been looking forward to the Greg Capullo Joker figure, which comes in that typical, larger size. I liked how Capullo’s Endgame Joker looked and have held out for this figure, rather than get the Mattel version. (I’m usually pretty savvy about merchandise licensing issues but I still can’t figure out how both companies have been putting out such similar action figures, like the Flash TV figures, so close together.)

There are some differences in the accessories, however: DC’s version comes with an interchangeable, battle-scarred head, a hatchet and a BANG gun. The Mattel one, which has been out for a little while now, comes with the Joker’s rotted, cut-off face from earlier in the New 52.

Now that I’ve typed that, I think that might be the most disturbing action-figure accessory ever, besides the Joker’s camera from The Killing Joke set of a few years ago.

— DC Comics Bombshells Annual #1 features that world’s Batgirl. I’ve been hot and cold on the Bombshells comics, but I’ll give this a look.