Marc Buxton begins his journey through Marvel‘s revamp in earnest — with three reviews!

(NOTE: If you want a DC fan’s take on Secret Wars, click here!) 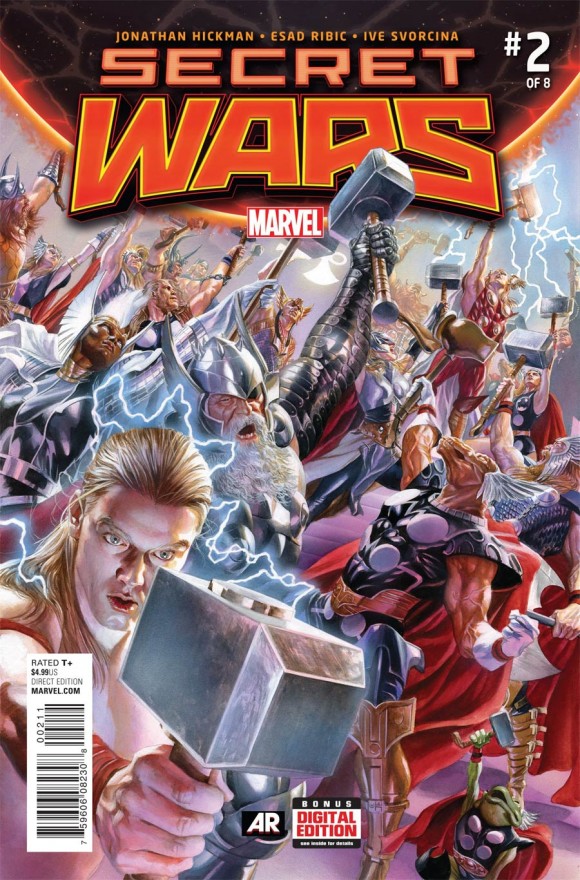 Secret Wars #2. Writer & Designer: Jonathan Hickman. Artist: Esad Ribic. Color Artist: Ive Svorcina.
I’ll say one thing for Secret Wars so far — it feels really, really big. This isn’t an event going through the motions; this is an event that Hickman and Ribic have infused with a sense of importance. This issue serves as a tour through Battleworld with a newly minted young Thor as the reader’s guide. In Secret Wars #2, you will learn how Battleworld works, the physics of it all, experience the social impact of the rag-tag series of worlds, and discover the shocking god figure of the newly minted realm. Hickman is able to craft quite an information dump but does so through carefully developed characters in order to keep the flow from being bogged down in exposition. Along the way, he gives readers a glimpse into the activities of the kids of the Future Foundation, introduces an alternate version of Doctor Strange, and details a war between the Captain Britain Corps of Avalon and the realms of Mr. Sinister. Secret Wars is loaded, it’s often confusing, it will be intimidating to new readers, but it is never dull or predictable. 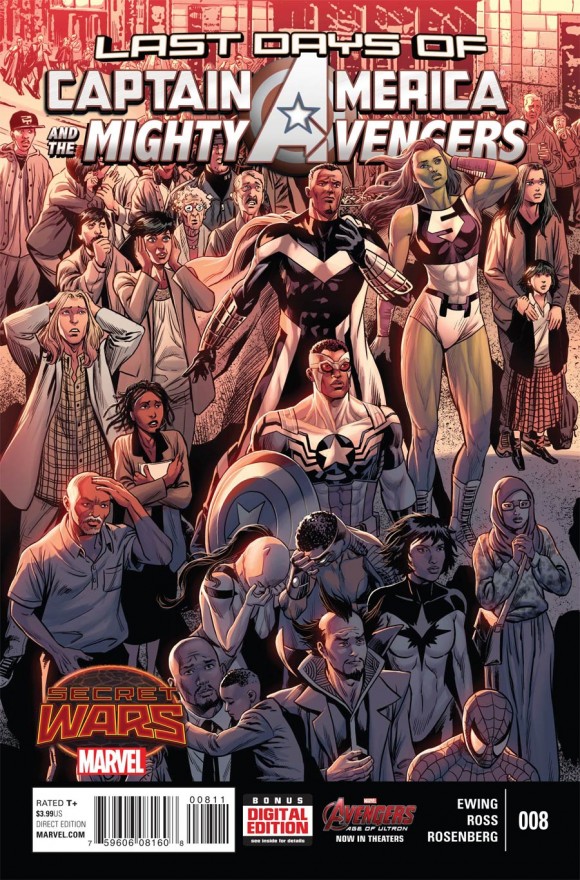 Captain America and the Mighty Avengers #8. Writer: Al Ewing. Artist: Luke Ross. Color Artist: Rachelle Rosenberg.
When this book was called Mighty Avengers, it was one of the more fun Avengers books on the market. Since it added Captain America to the title, the book has become a morass of crossovers that have taken the spotlight away from the fascinating group of characters that inhabit it. First Axis interrupted the development of this team and now Secret Wars. The whole issue is a rehash of Secret Wars as the aged Steve Rogers confesses his sins to Sam Wilson’s team. It’s just a lot of finger-wagging and teeth gnashing and just seems very forced. Ewing executes his usual deft characterizations and paces the onerous issues very well, but the flaws of this issue are a result of shoehorning it into the Secret Wars event so soon after it was shoehorned into Axis. Fans of Monica Rambeau will be particularly happy with this issue as she is the only member of the team who does anything rather than react to a 20-page recap. The art is downright gorgeous though, as Luke Ross continues to be one of the most underrated artists in the game. 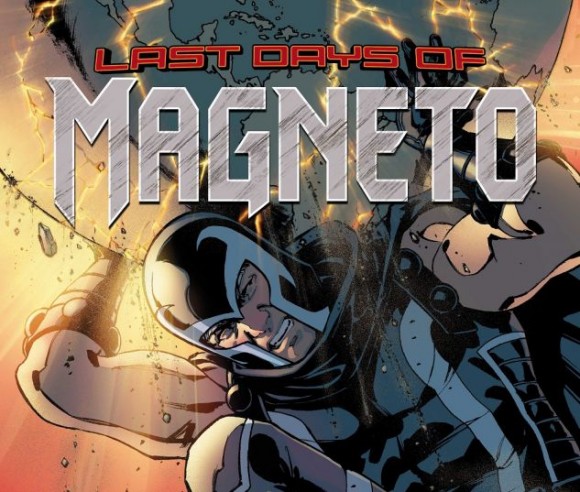 Magneto #18. Writer: Cullen Bunn. Artist: Paul Davidson. Colorist: Paul Mounts.
Now this how you do a crossover. As Battleworld begins to affect Genosha, the people look to their newly minted savior Magneto to, well, save the day. Along the way, readers gets to meaningfully explore Magneto’s relationship with his daughter Polaris and witness the history between Magneto and Sub-Mariner. It’s a deep and fascinating character study of Magneto both past and present that uses Secret Wars as a jumping-off point to create a great challenge for the titular anti-hero. It’s a meditation on Magneto as a man, as a villain, and even as a hero. This is an example of a solo title using the crossover to find some great story moments rather than just a going through the motions of an event take-over.