THIS WEEK IN SECRET WARS: An Explosion of New Titles

Home » REVIEWS! » THIS WEEK IN SECRET WARS: An Explosion of New Titles

SECRET WARS bursts open this week with SIX titles — and we review them all! 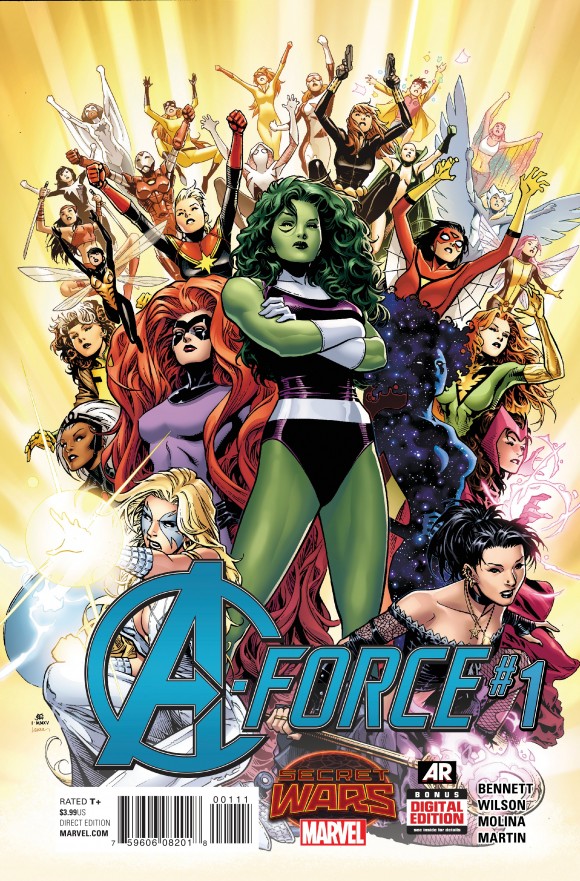 A-Force #1. Writers: Marguerite Bennett & G. Willow Wilson. Penciler: Jorge Molina. Inkers: Jorge Molina & Craig Yeung. Colorists: Laura Martin & Matt Milla.
A-Force is one of those new titles that would be inviting to new readers if it weren’t caught in the story morass of a mega-event. But if you’re a stalwart Marvel faithful, this one will scratch all sorts of itches. This story is rather simple: Miss America breaks the Battleworld laws of Doom and is punished. For such a simple premise, the debut issue packs in a great deal of gravitas and drama as the women of the Marvel Universe fight to keep their own realm safe in the complex political landscape of Battleworld. This title is bursting with potential and should be a great deal of fun moving forward, even if it does suffer a bit from crossoveritis. 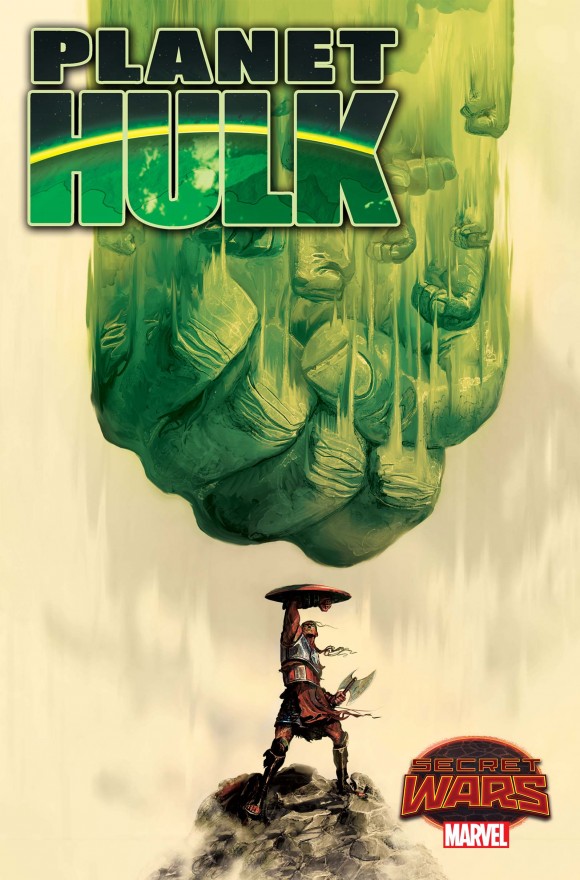 Planet Hulk #1.Writer: Sam Humphries. Artist: Marc Laming. Colors: Jordan Boyd.
Now this is not what I was expecting at all. Instead of a focus on the characters and elements from the classic Planet Hulk event, Sam Humphries instead focuses on a gladiator version of Steve Rogers who journeys with his faithful steed Devil Dinosaur (AWESOME!) to the realm of Planet Hulk. We don’t even really get to see Banner or King Hulk (we do get to see plenty of other Hulks) but we do get a lot of dinosaur-on-Hulk action and what else can you really ask for? This one stands out as an insane gem that needs to be experienced. 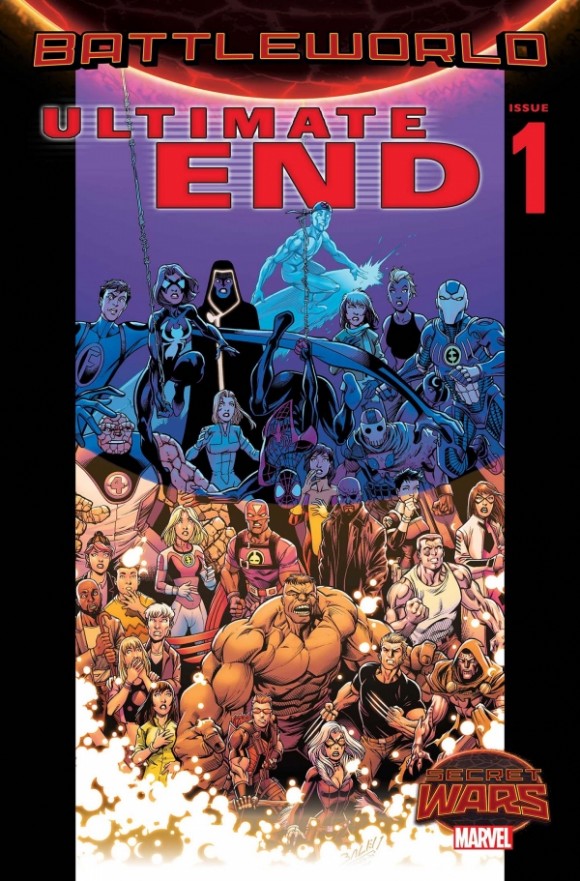 Ultimate End #1. Brian Michael Bendis. Penciler: Mark Bagley. Inker: Scott Hanna. Colorist: Justin Ponsor.
If the Ultimate Universe is going out, it’s going out with a bang as the two forefathers of everything Ultimate, Brian Michael Bendis and Mark Bagley, present a meeting between the heroes of the 616 and the Ultimate Universe. The book is a study in contrasts between the two universes as even the lettering style is different for each set of characters. There’s an encounter between the two versions of Tony Stark, an awkward meeting between the 616 Peter Parker and his gender-altered clone, the Ultimate Spider-Woman, and a unification of both universes’ greatest heroes. Bendis‘ love for the characters from both realities is clear and this book feels big and important — as it should. 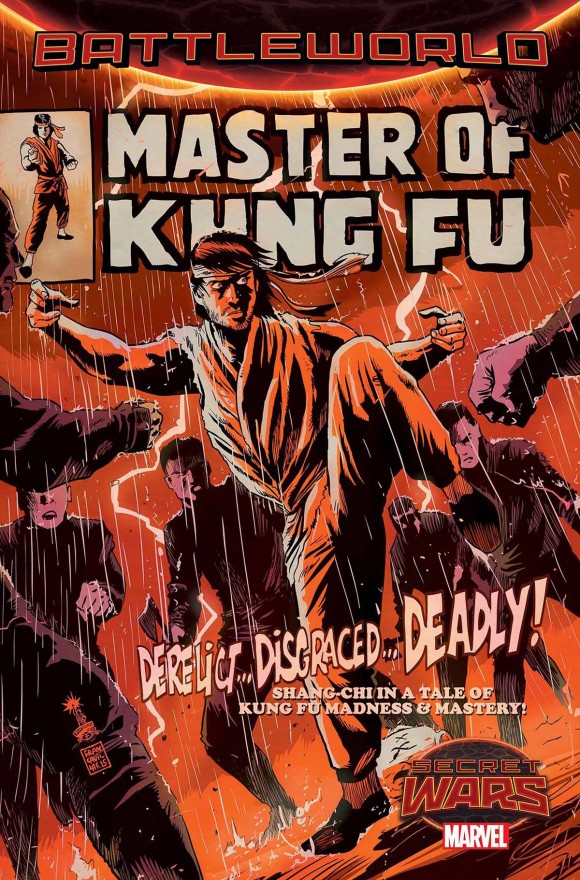 Master of Kung Fu #1. Writer: Haden Blackman. Penciler: Dalibor Talajic. Inker: Goran Sudzuka. Colorist: Mhroslav Mrva.
Another strange little delight. Master of Kung Fu#1 deals with a realm of kung fu and is masterfully told by Haden Blackman, the former writer of the woefully underrated Elektra book that just ended. In this part of Battleworld, Shang-Chi‘s father rules with an iron fist (literally). A drunken Shang-Chi must sober up to defeat his father and become the new Master of Kung Fu. Along the way, we meet some kung fu versions of favorite Marvel characters, such as the Morlocks and Lockheed the Dragon. Thanks to Dalibor Talajic‘s action-packed art, you really get a sense that you are watching some Shaw Brothers film at 1 pm on a lazy Sunday. Great stuff as Marvel continues to do some genre exploration as part of Secret Wars. 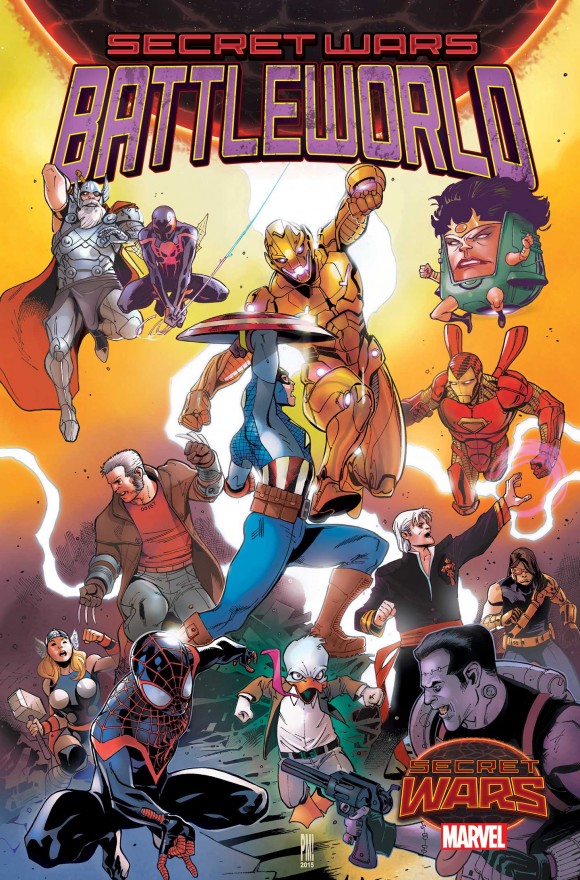 “Soldier Supreme.” Writer: Joshua Williamson. Artist: Mike Henderson. Color Artist: Jordan Boyd.
This is another one of those mixed-bag anthologies that Marvel seems to love to do with every event. Our opening story is a neat little tightly told yarn about a Doctor Strange-possessed Punisher. It’s as fast paced and fun as the concept would seem to suggest and should appeal to those with a sense of ’90s nostalgia as the magical Frank Castle takes on demonic versions of the Fantastic Four (the Wolverine, Ghost Rider, Hulk and Spidey version).

“MODOK Madness.” Writer: Ed Brisson. Artist: Scott Hepburn. Color Artist: Matt Milla.
Pretty much a long-form MODOK joke, but a funny one as MODOK takes on a bunch of alternate world MODOKS. If seeing Spidey MODOK, steam-punk MODOK, and baby MODOK is your thing, then have at it. Disposable but fun — even if the joke gets spread a bit too thin by the end. 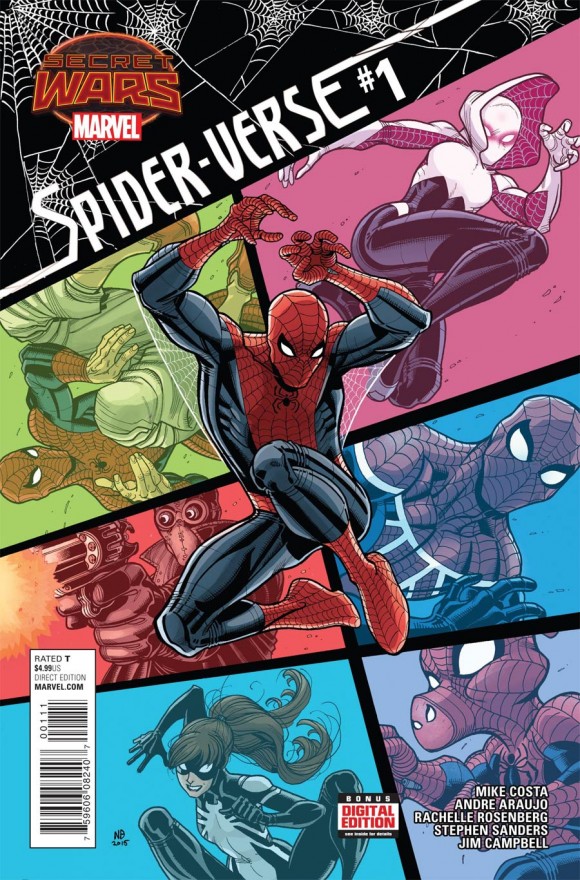 Spider-Verse #1. Writer: Mike Costa. Artist: Andre Araujo. Color Artist: Rachelle Rosenberg.
If you have been digging Spider-Gwen then this is the Secret Wars crossover for you as writer Mike Costa makes Gwen the central figure of his world of Spiders. One of the appeals of Secret Wars is the nostalgia. Fans can experience their favorite events from ages ago like Civil War or House of M, but Spider-Verse just ended. The book had to be particularly strong because I don’t think anyone is nostalgic for an event that climaxed two months ago. And good it is as Costa deftly reintroduces his key Spider players and creates a mystery involving Norman Osborn and — Spider-Ham?! It’s a Spider book that does not have the anchor of Peter Parker (yet) but because of Costa and Andre Araujo‘s story-telling acumen, it still really works.