This Week in Original Sin: Who Pulled the Trigger?

Home » REVIEWS! » This Week in Original Sin: Who Pulled the Trigger?

SPOILER ALERT!! The mega-event roars along and this week it’s big stuff! 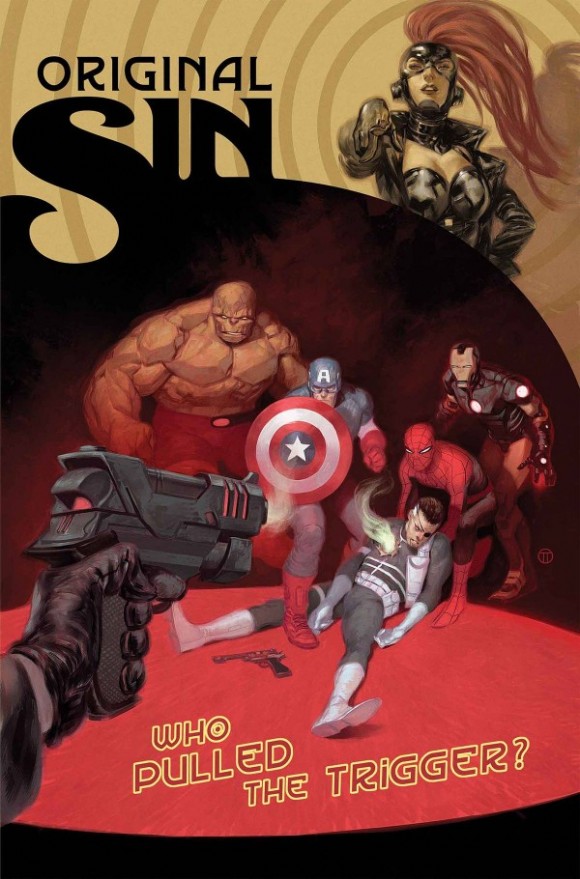 Original Sin #6. Writer: Jason Aaron. Artist: Mike Deodato. Color Artist: Frank Martin.
Is Original Sin the last classic Nick Fury story? Is the old World War II war horse going out to be replaced by the younger, more Hollywood friendly Samuel L. Jacksonesque Nick Fury? If so, this is one hell of an exit as old, grizzled, decrepit Fury takes on the heroes of Earth one last time. Fury has been revealed as the protector of Earth, the man who has kept aliens away from the planet for decades, and as such, he had to get his hands very dirty. The most impressive thing about this issue, other than the amazing Deodato art work, is the way Aaron keeps a breakneck piece while not muddling his characters’ voices. His Black Panther acts like the Black Panther, the one hero that Nick has a hard time manipulating. Gamora acts like Gamora, Moon Knight acts like Moon Knight. There are even a few Rocket Raccoon-inspired chuckles. This issue brings up more questions than it answers, but what a fun ride as the rest of the Marvel heroes join Dr. Strange, the Winter Soldier, and company. Fury reveals that one of the heroes will have to replace him, but who?
Grade: A 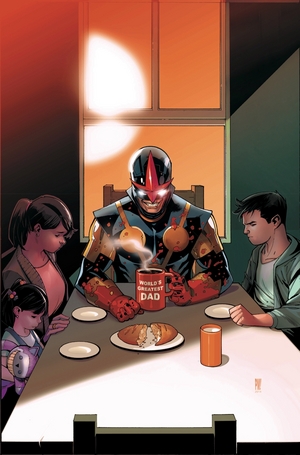 Nova #19. Writer: Gerry Duggan. Penciler: David Baldeon. Inker: Terry Pallot. Colorist: David Curiel.
So far, the more effective Original Sin crossovers have been the ones that utilize a story beat from the event and then go and do their own thing. When Sam Alexander found out that his former Nova Corps dad was a murderer from the Watcher’s eye, things got really interesting for a series that has been spinning its wheels of late. This is the best issue of the new Nova series to date, with a Star Wars-like space adventure with Nova and Rocket Raccoon (yeah, he’s here too, get used to him) trying to find out the secret of Sam’s dad from a space gangster.
Grade: A- 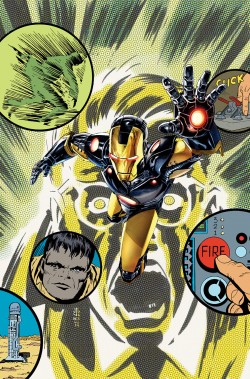 Original Sin: Hulk vs. Iron Man #2. Story: Mark Waid and Kieron Gillen. Script: Kieron Gillen. Artist: Luke Ross. Colorist: Guru E-FX.
Speaking of Original Sin story beats carrying a series, the sins of Tony Stark’s past come back to haunt him as Bruce Banner discovers that Tony tampered with the Gamma Bomb and was essentially responsible for the Hulk’s creation. Yeah, it’s about as intense as it sounds as the all-star writing team of Waid and Gillen tell a tale of two eras, the pre-Hulk era where Banner and a very drunk Stark are at odds and the modern era where Stark learns exactly the sin he committed while in his cups. Waid and Gillen gave each of the players a distinct voice in both their eras and tell a very non-linear story very clearly. Luke Ross gives a differentiated artistic tone to each era. A little too decompressed but the parts that work are terrific.
Grade: B+